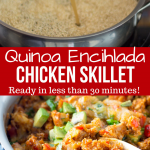 This shop has been compensated by Collective Bias, Inc. and its advertiser. All opinions are mine alone. #NewYearNutrition #CollectiveBias

This Quinoa Enchilada Skillet is a flavorful dinner made in less than 30 minutes for the weeknight win! 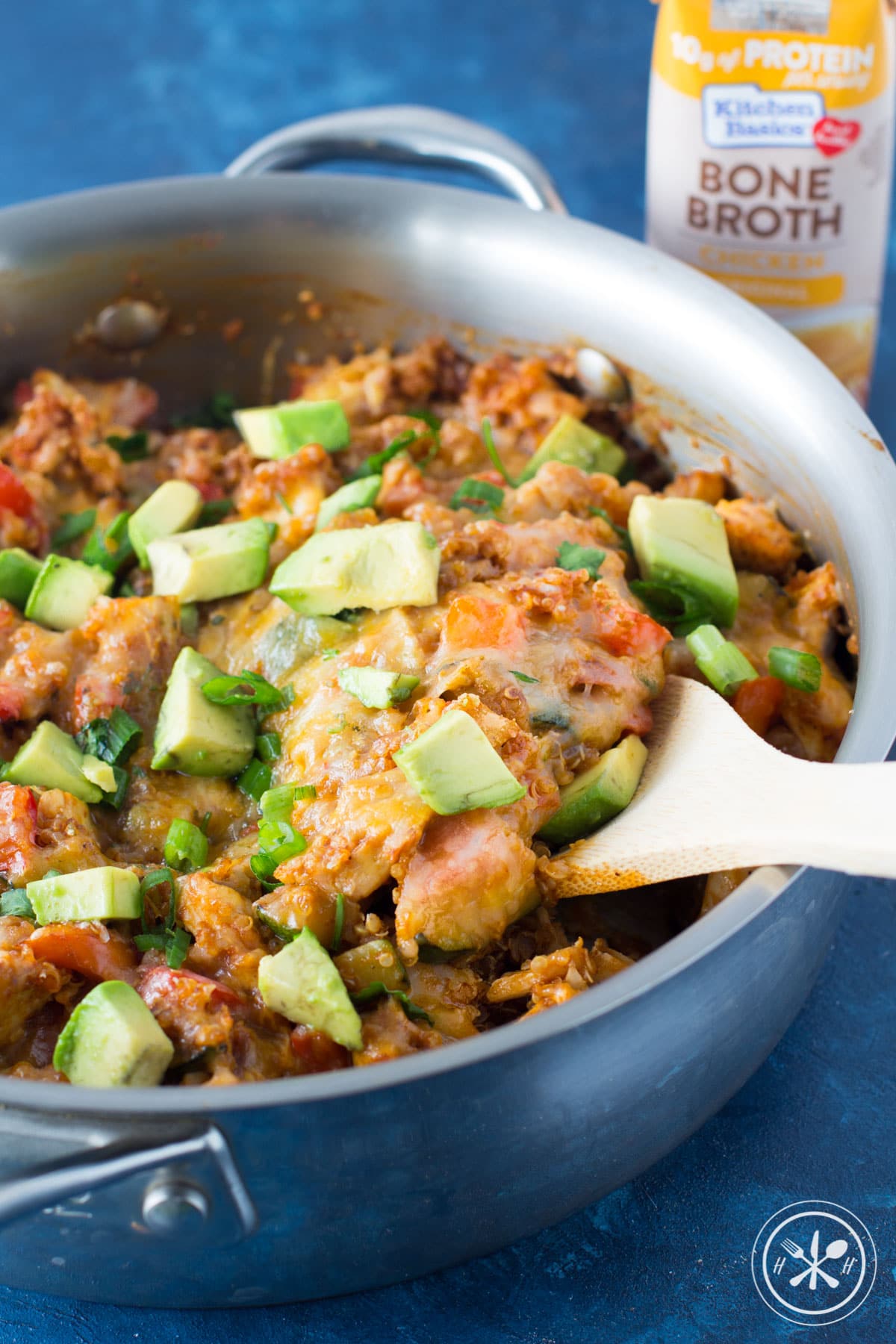 Hi friends!  On this year’s reader survey, the majority of you requested dinner recipes that can be made in 30 minutes or less.  That’s why I’m so excited to be partnering with my friends at McCormick Kitchen Basics Bone Broth to share with you this super fast and healthy Quinoa Enchilada Chicken Skillet recipe for the dinner win!

Have you tried quinoa before and thought it wasn’t for you?  One of the number one complaints I hear about quinoa is that it has an earthy taste (which is a nice way of saying it taste like dirt.)  The secret to quinoa is cooking it in the hearty and delicious Kitchen Basics Chicken Bone Broth, which is made from real bones, organic vegetables, and spices.  Your quinoa will taste like the bolder richer flavor of the Kitchen Basics Bone Broth instead of “earthy quinoa.” 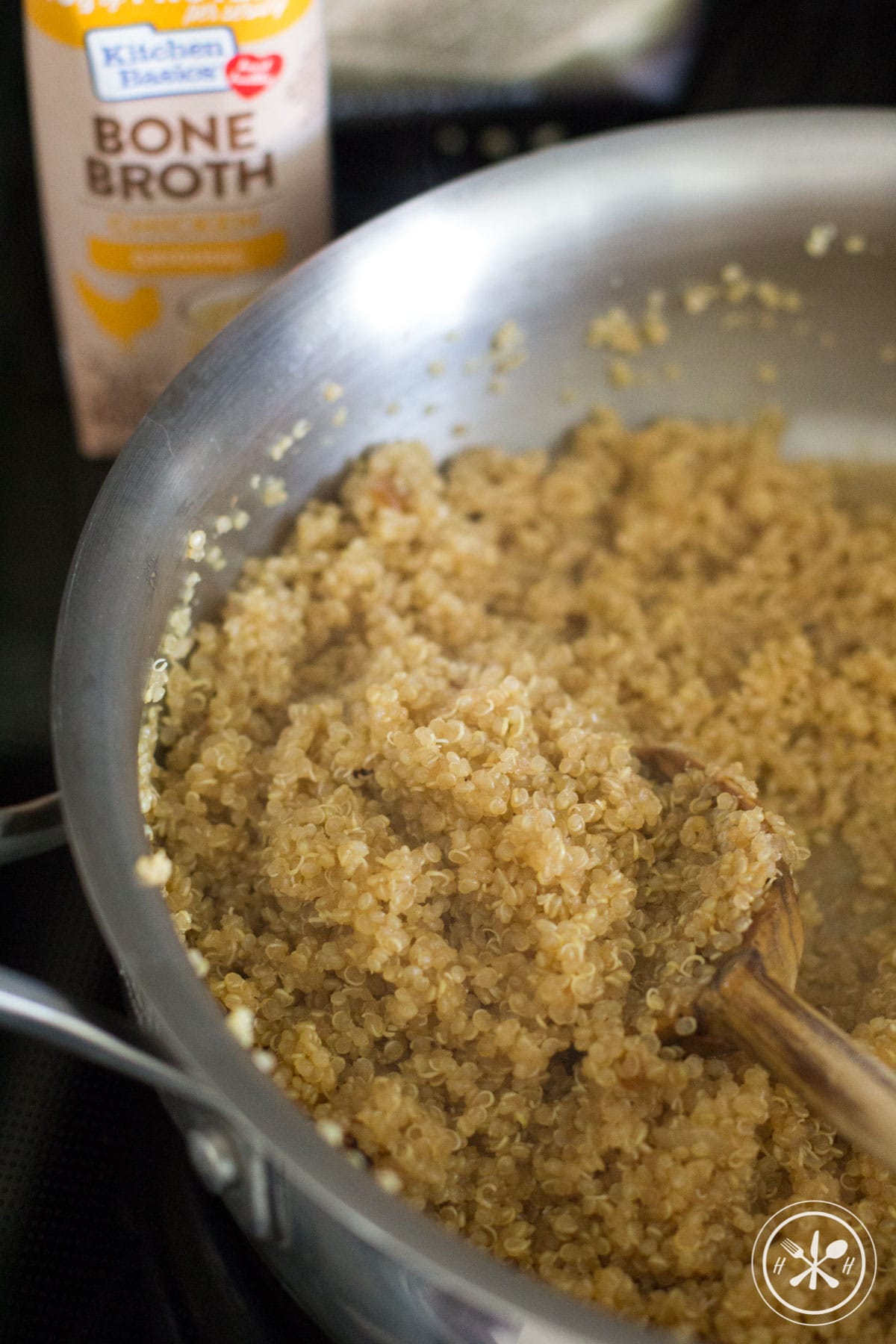 What Is Bone Broth?

You might be wondering what “bone broth” actually is.  Bone broth is similar to stock and is made using real bones while traditional broth is made using meat. Kitchen Basics Bone Broth builds upon the brand’s 20+ years of stock experience to deliver a rich, savory bone broth full of protein and flavor.  It’s the only brand certified Healthy Heart by the American Heart Association!

Bone broth contains more protein and is slightly more viscous than traditional broth.  Kitchen Basics Bone Broth contains 10grams of protein per 8.25 ounce serving and only 50-60 calories depending on the flavor.  It’s the perfect option for sipping as a warm beverage in place of your morning coffee, an afternoon snack, or even after the gym instead of a protein shake. I placed a few in our snack drawer to remind me that it’s a great low-calorie option when I need a snack! 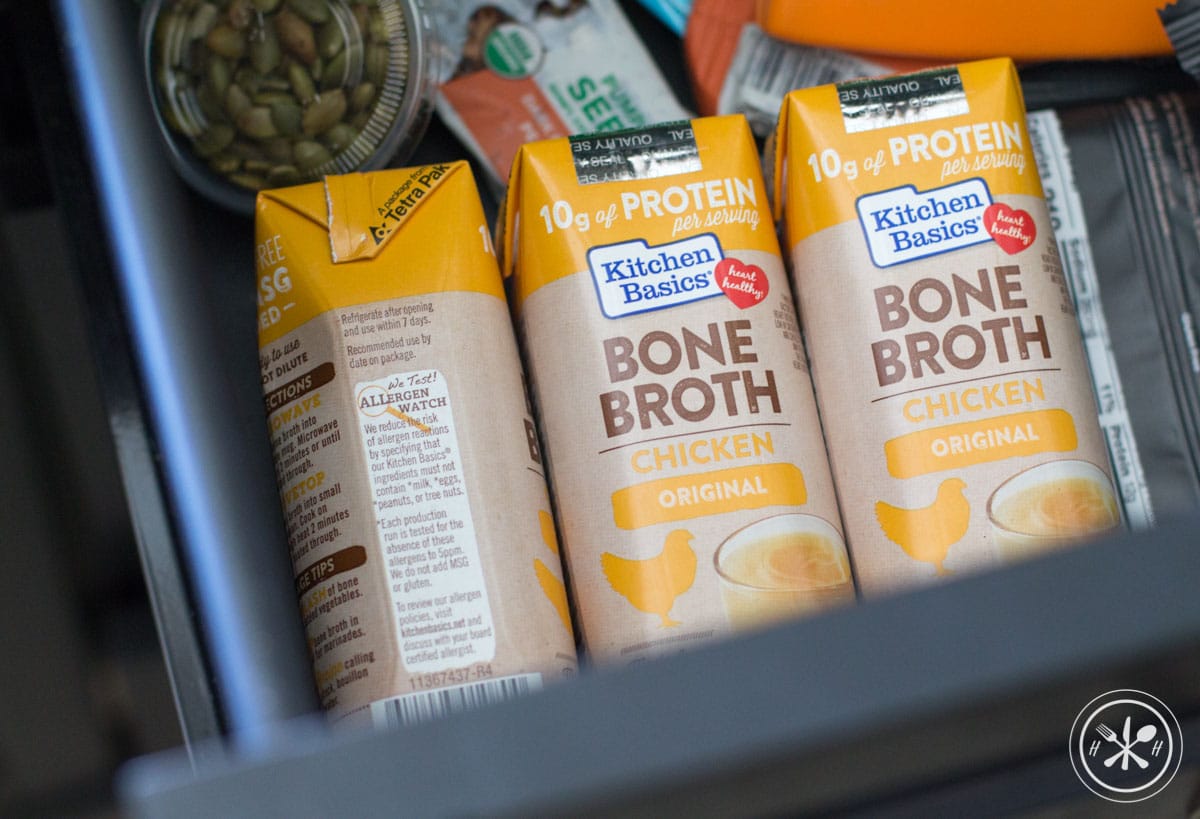 Kitchen Basics Bone Broth can be found at Publix, HEB, Food Lion, Giant/Stop & Shop, Safeway AND Amazon. Like all staples in my household, I ordered from Amazon.  You can place your Amazon order here! 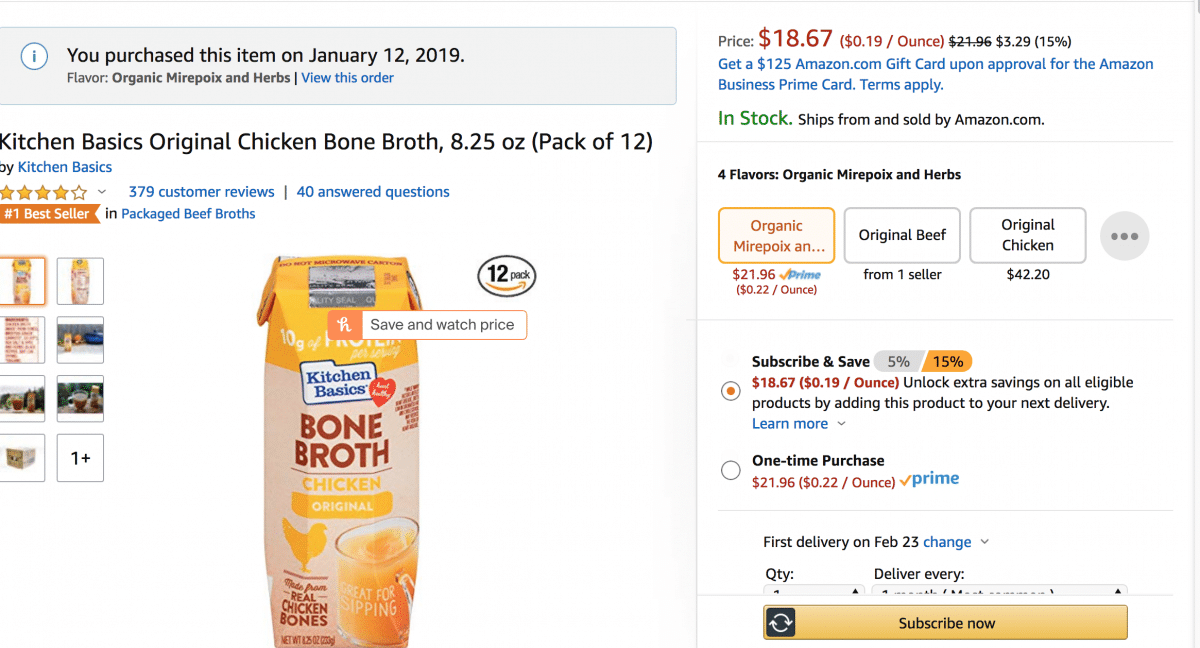 Because I have a baby that hates the car seat, so Amazon is my life (as if it wasn’t before but at least now I have a legit excuse). 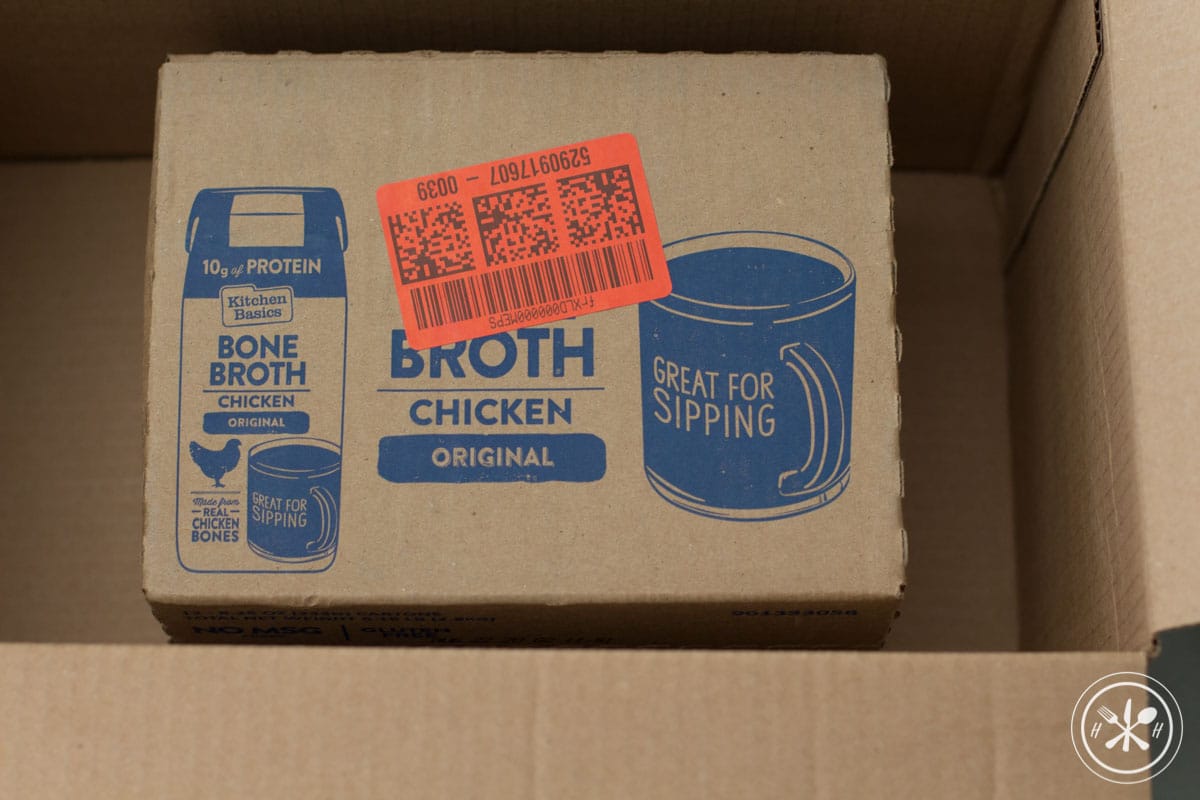 How To Use Bone Broth

In addition to sipping bone broth, you can replace KB Bone Broth for water and broth in recipes, such as when cooking grains (like I did in this recipe), sauteing vegetables, braising meats, making sauces and gravies, and making soup.  Not only will you be adding flavor but you’ll be adding protein as well! 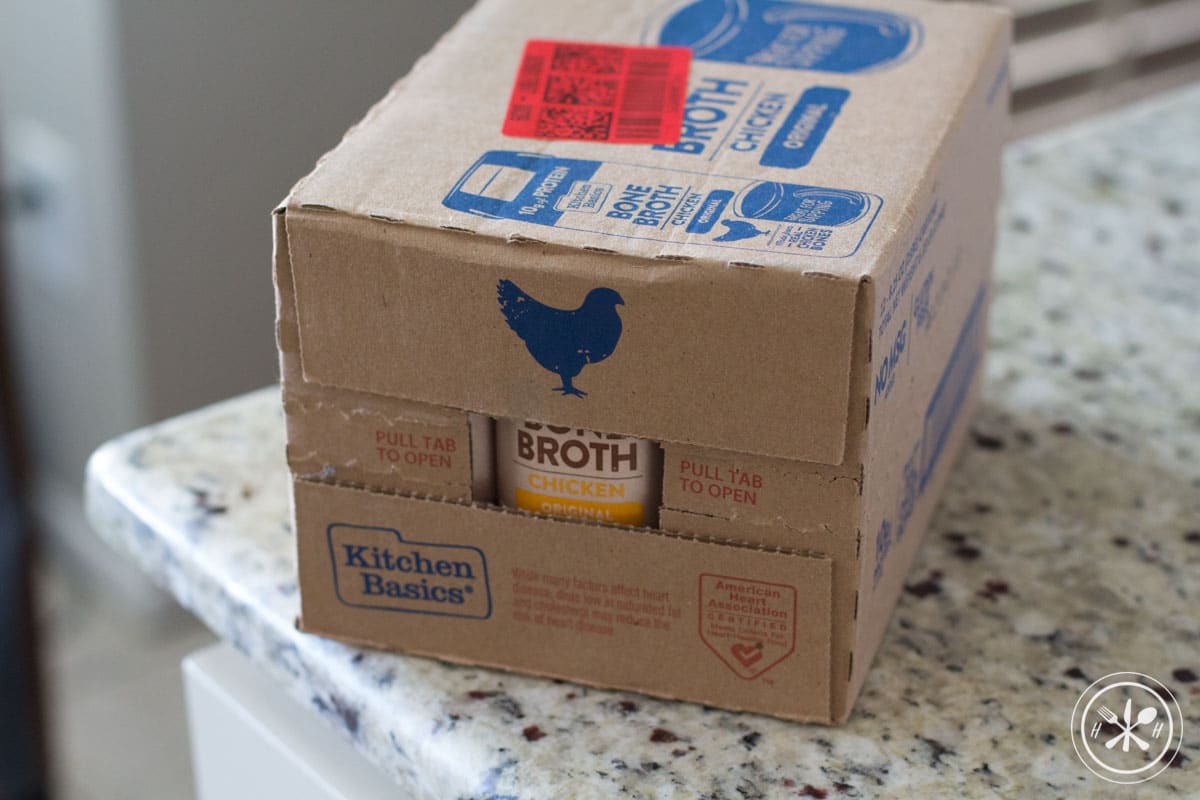 How To Make This Recipe In Under 30 Minutes

For this recipe, I subbed the bone broth for water in a one to one ratio.  I simply followed the directions on the back of the quinoa package swapping bone broth for water.  I needed 2 cups liquid, so I used two containers of bone broth.  That is one thing I love about the bone broth packaging; you only use what you need.  You never end up with half a box stashed in the fridge because you didn’t use it all! 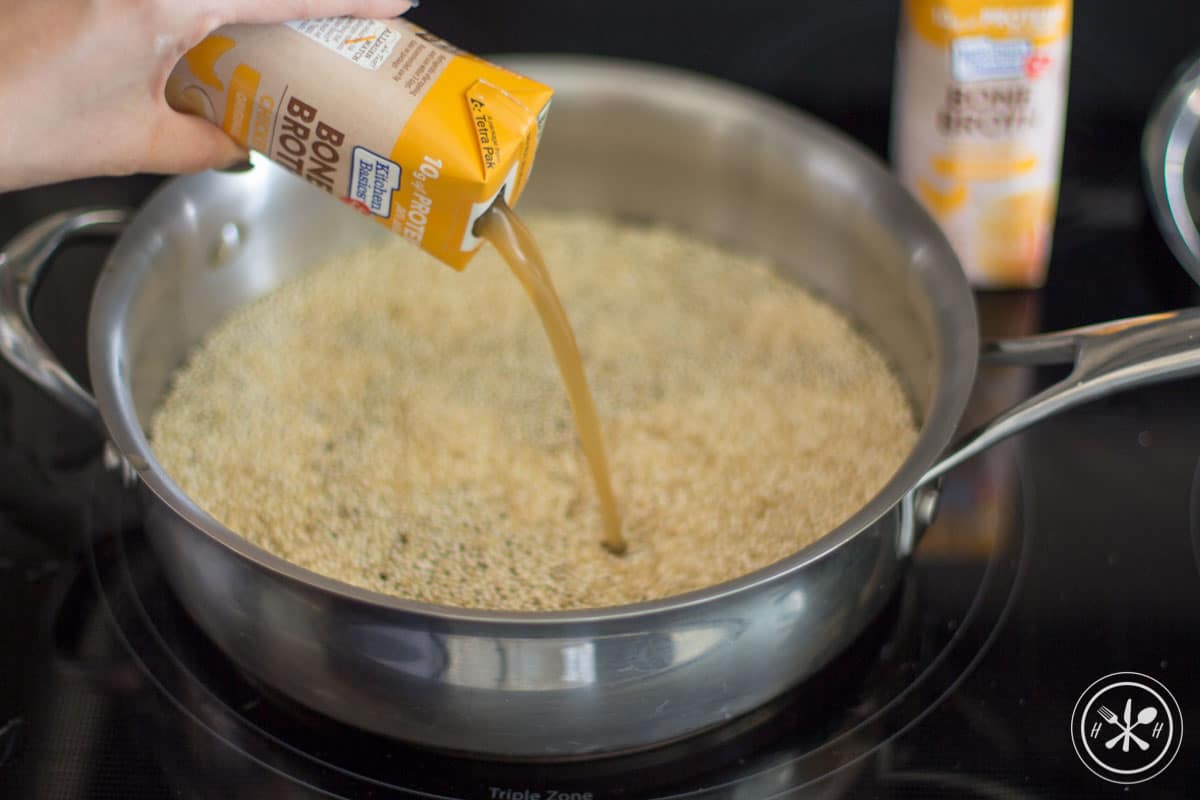 While the quinoa is cooking (takes about 20 minutes), it’s time to chop and saute the veggies! 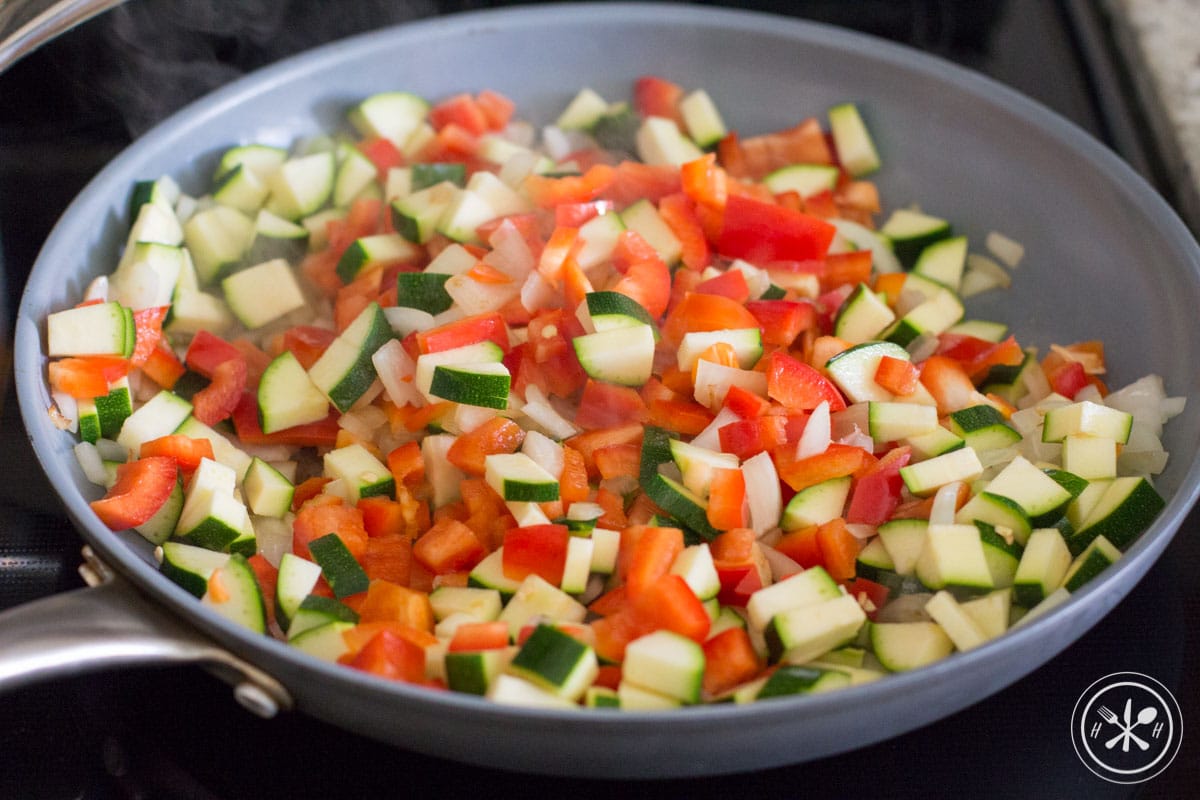 Make sure you chop them pretty finely, this is one of those recipes where you don’t want to chop down on a giant chunk of onion or veggie.  You want everything in small bite-size pieces, so it all blends nicely in the skillet when it comes together. 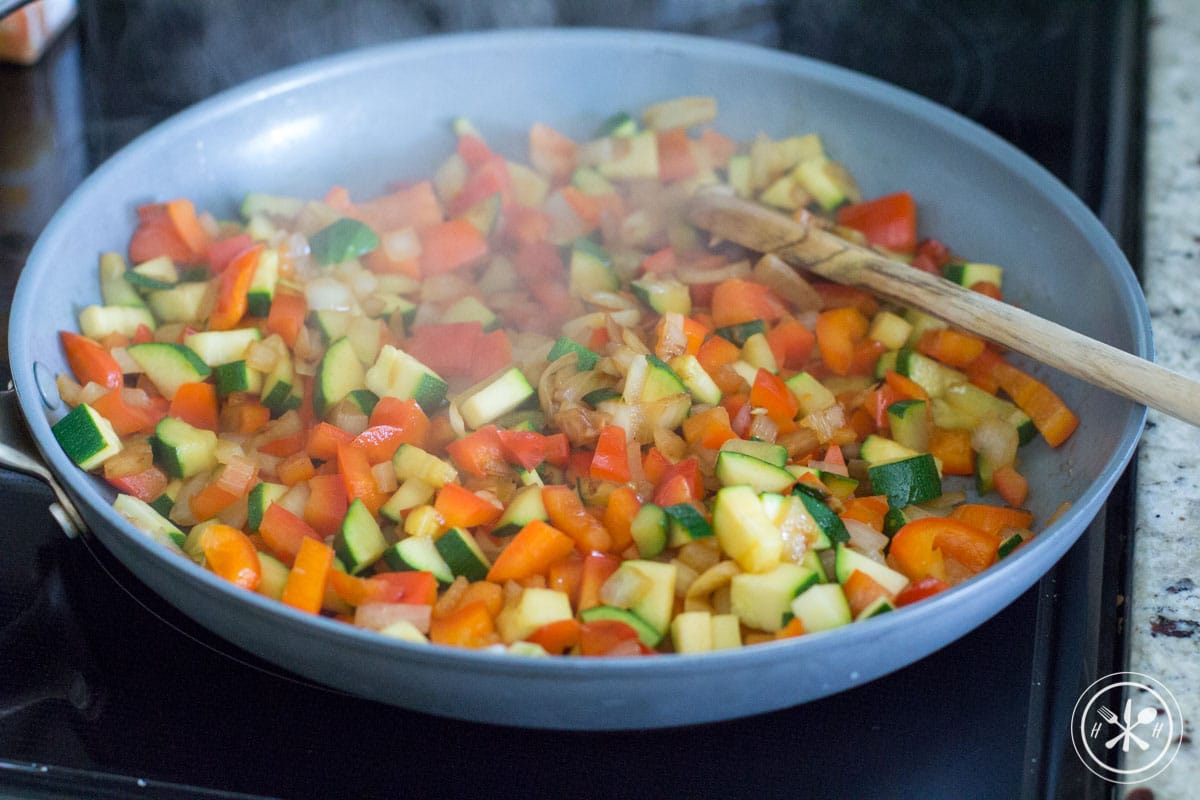 Then you will combine the quinoa, enchilada sauce, veggies, and chicken for a delicious meal!  Top with cheese, cilantro, green onions and avocado for a real fiesta! 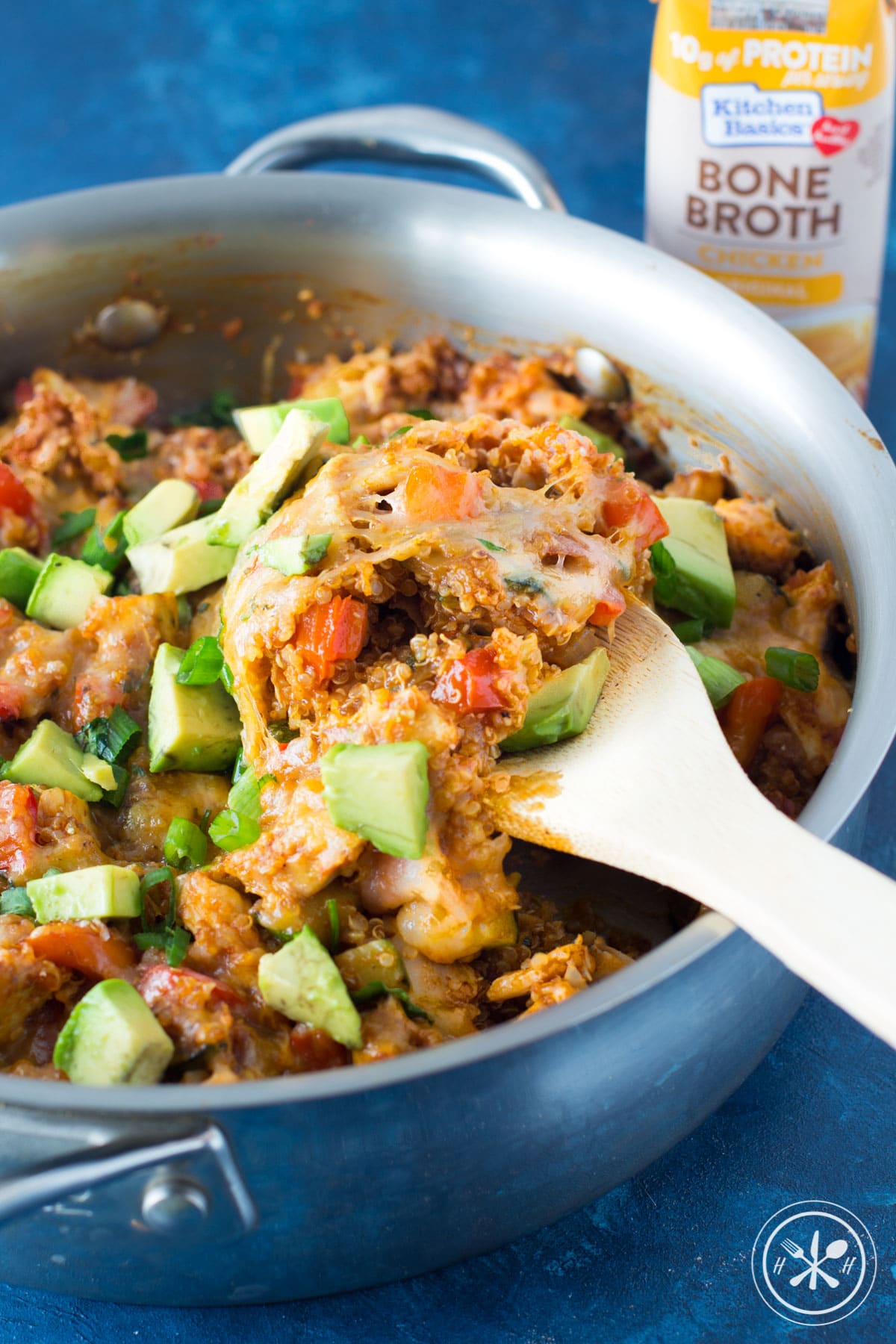 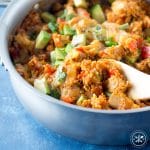 *I buy prewashed quinoa from Costco. Make sure to rinse your quinoa prior to cooking if the package says to do so.

Like this recipe?  Don’t forget to pin this recipe for later and follow @hungryhobby for more healthy recipes, quick workouts, and nutrition tips!

Previous Post: « The BIG Fourth Trimester Wrap Up
Next Post: Why You’re Raiding The Refrigerator At Night »