Hi friends!  So many of you said you like the day in the life type posts. I thought I’d do another one!  This was recorded yesterday, it was mostly a working day, so not super exciting.  Mr. Hungry had PTO so, he was able to watch the baby while I got caught up on work.

I started the day by hitting up the treadmill.  I got up at 5:15, drank a few sips of black coffee, and did a 30-minute Aaptiv Run. 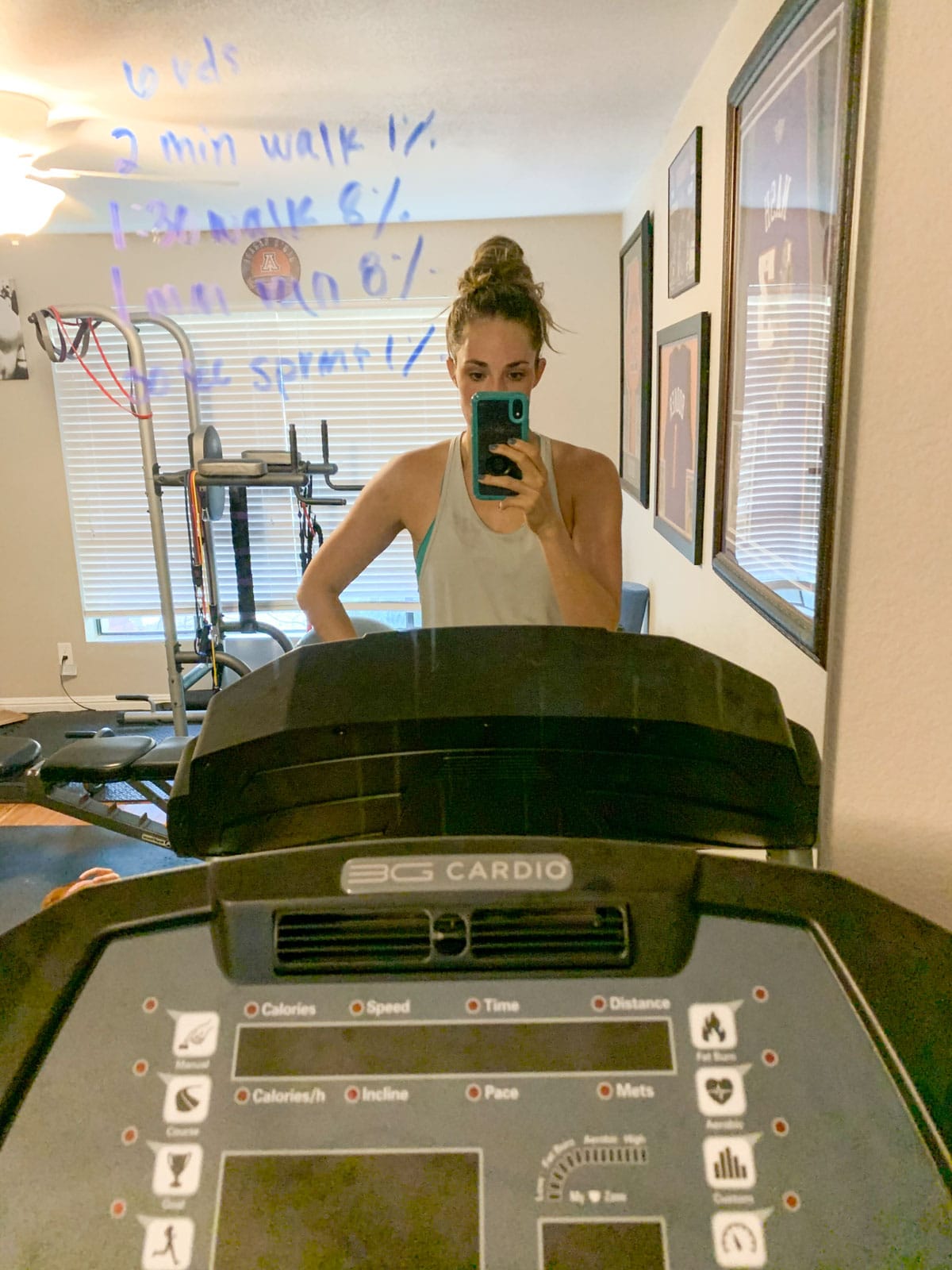 I finished my run and headed in to get KJ so that we could take Nala on a walk while Mr. Hungry worked out. 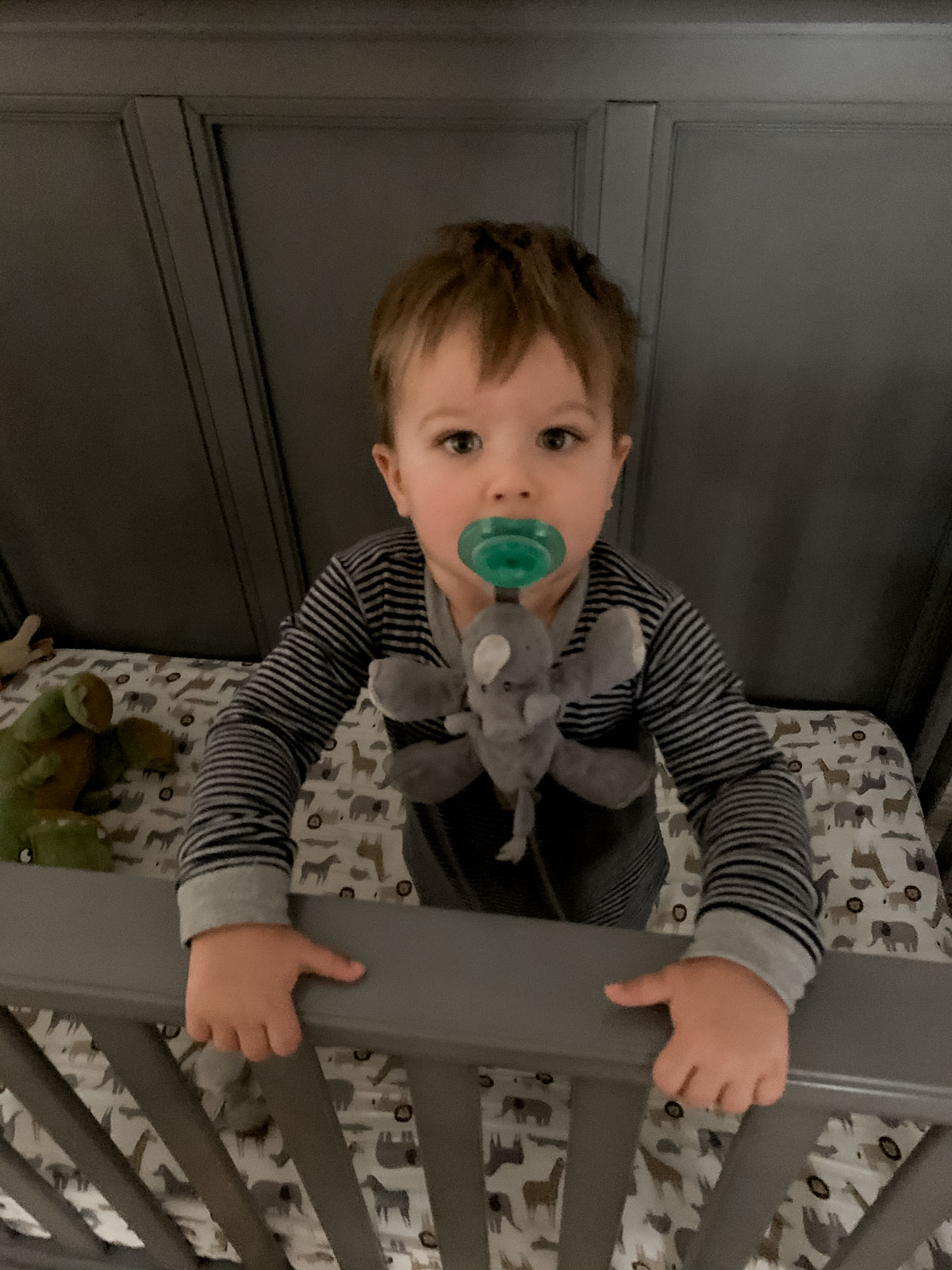 I’ve been giving him cheerios and bunnies, plus his ripple pea milk to take on the walk with him.  Then, when we get home, he has a more substantial breakfast.  We walk about 40 minutes or a two-mile loop. 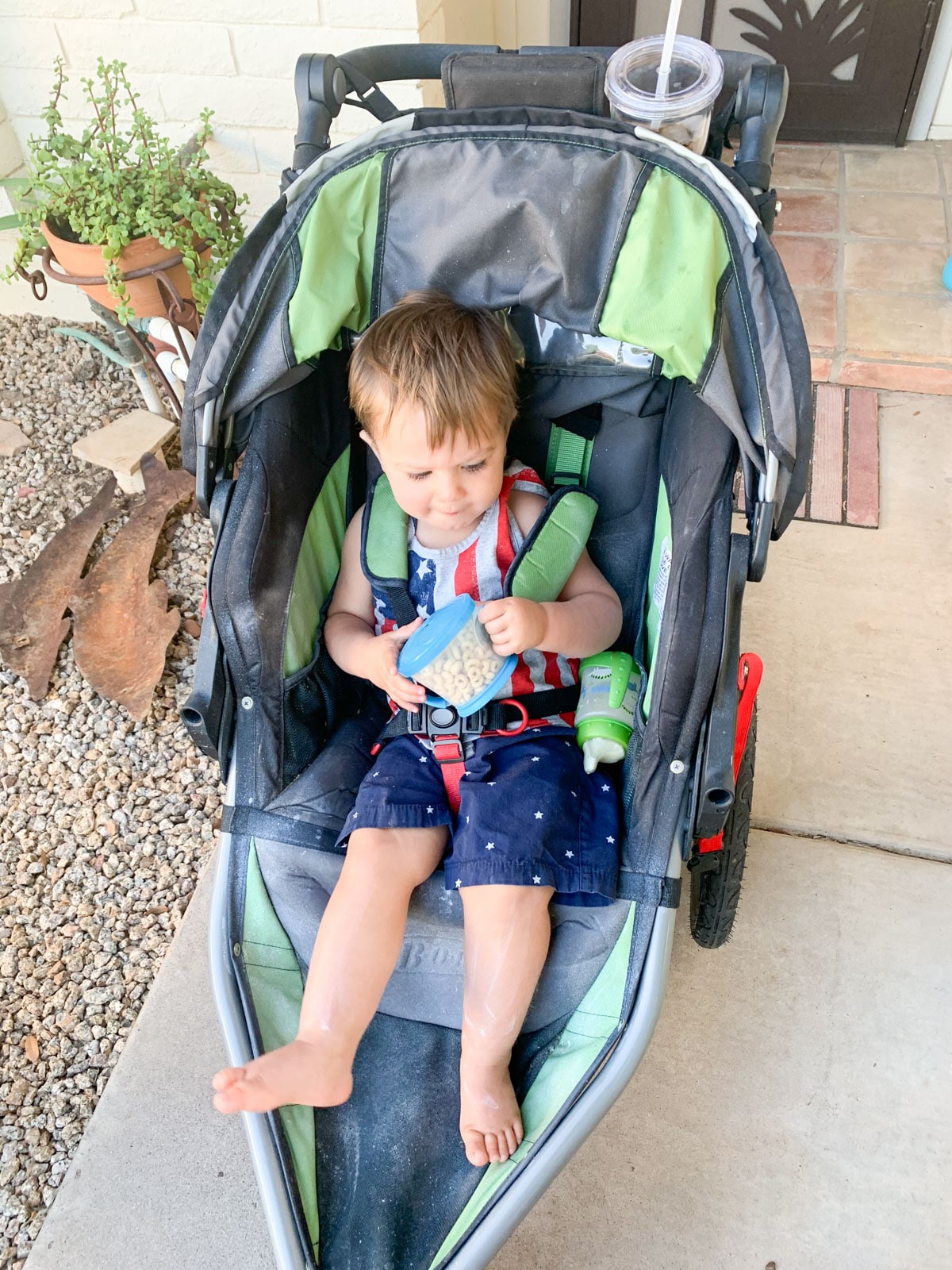 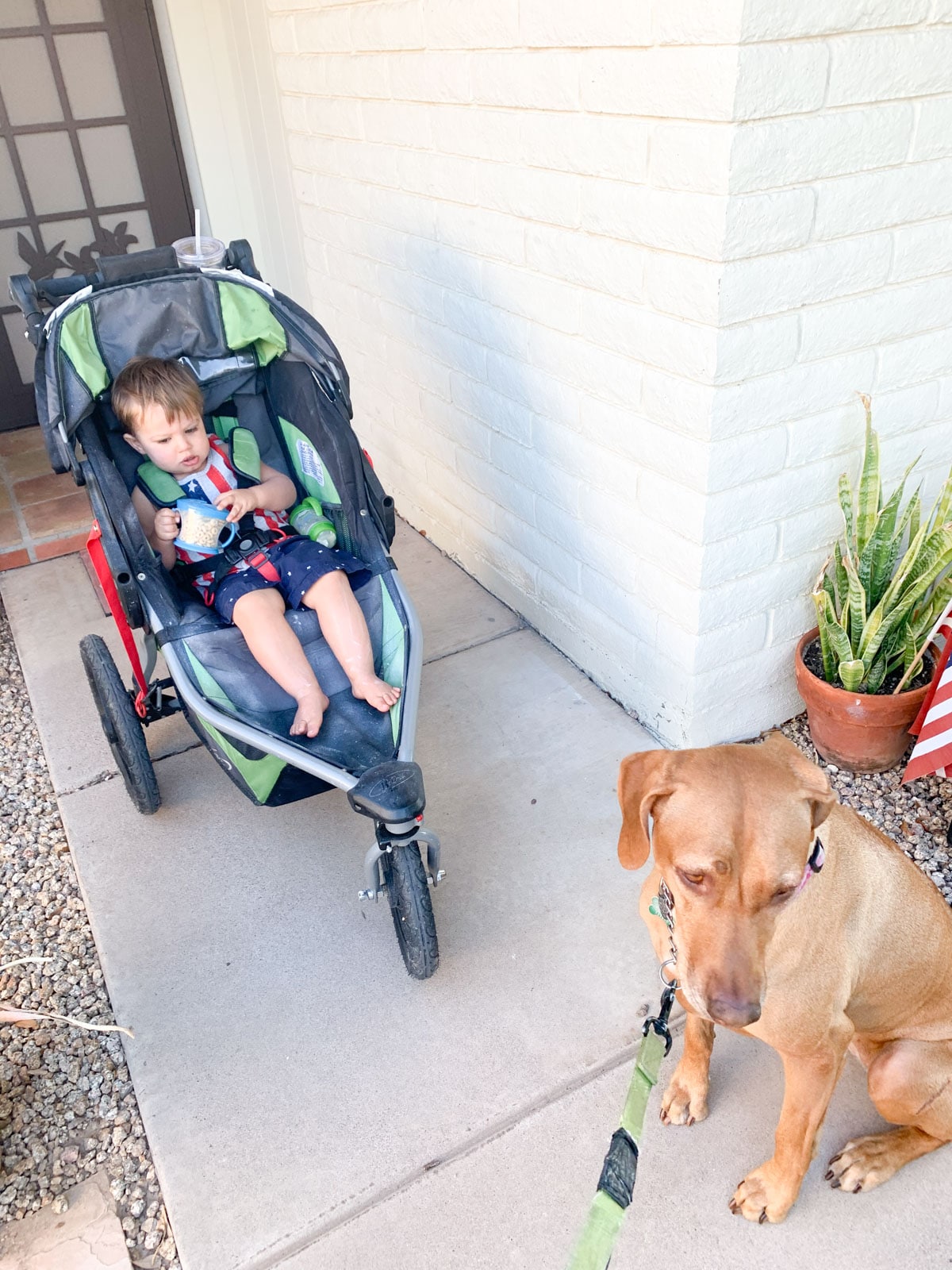 When we got back from the walk, I made smoothies for everyone!   I shared how I make our Smoothie Box smoothies in a post last week, this day was pretty similar to that.

Mr. Hungry and I both had cacao Smoothie Box smoothies. 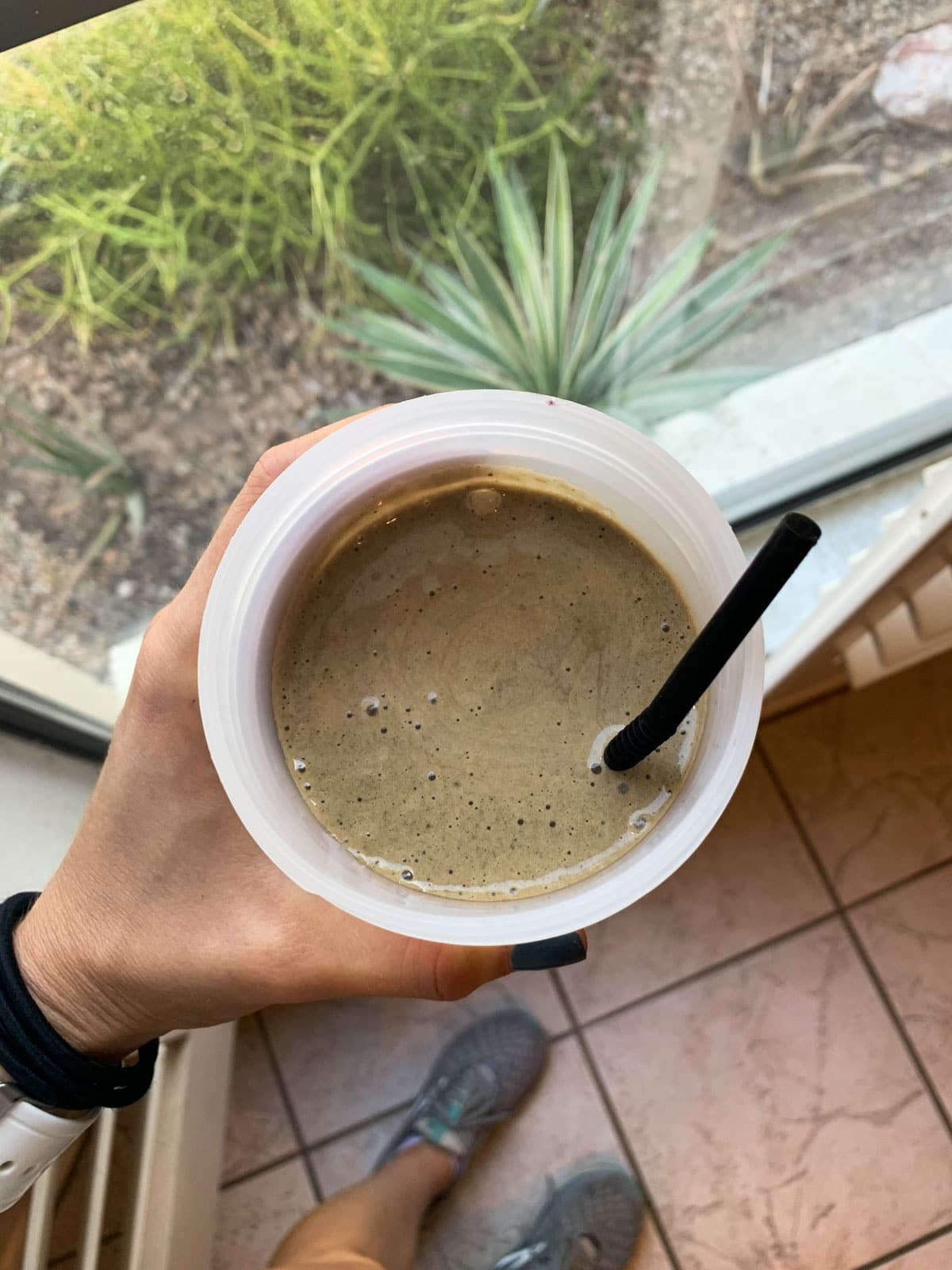 KJ had a Berry Smoothie Box Smoothie while playing with some random plastic tupperware. 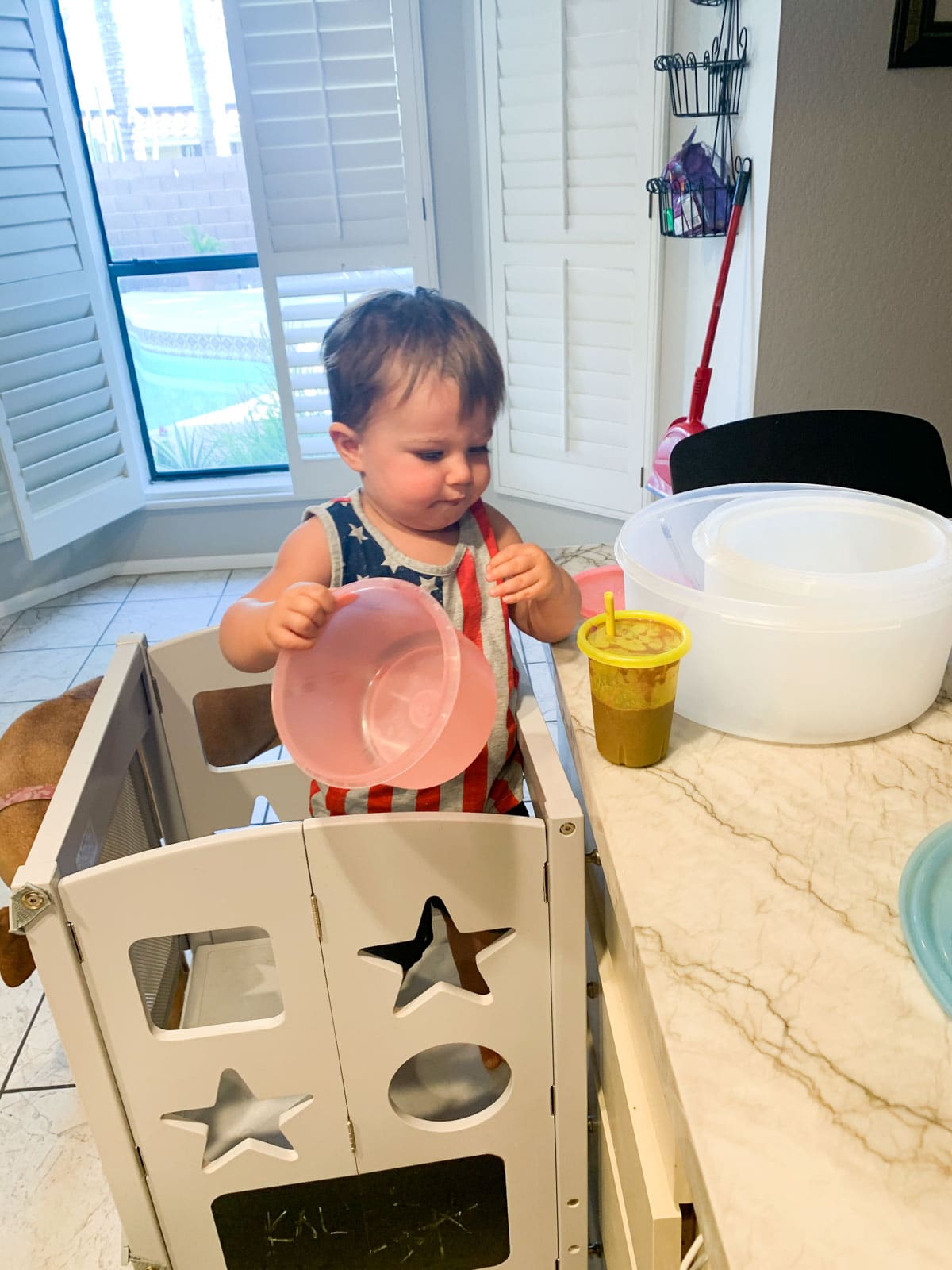 After showering and getting ready for the day, I spent the rest of the morning working.  I’m teaching a summer class online, so I responded to student messengers, added some helpful resources, and recorded a lecture.  My department head and I are also working on an open resource textbook, so I edited that for a little bit.

Then, my MIL came over to go to Costco with me!  I’m working on a special recipe project, so I needed two different carts, one for recipe stuff  (food bloggers are allowed to expense ingredients when developing recipes, etc..) and another for home stuff (to keep business and home expenses separate.)

It all went in one car, though…… 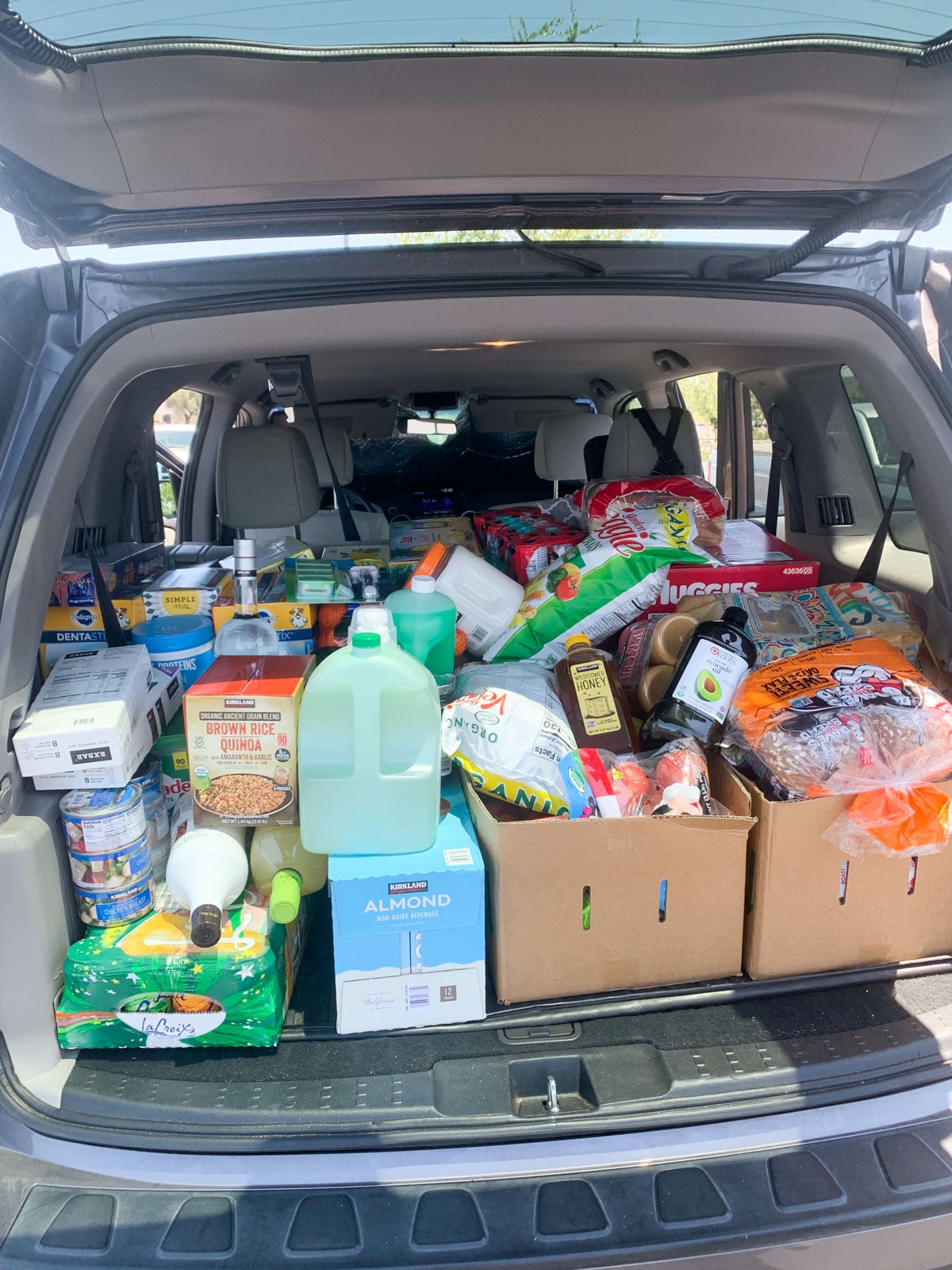 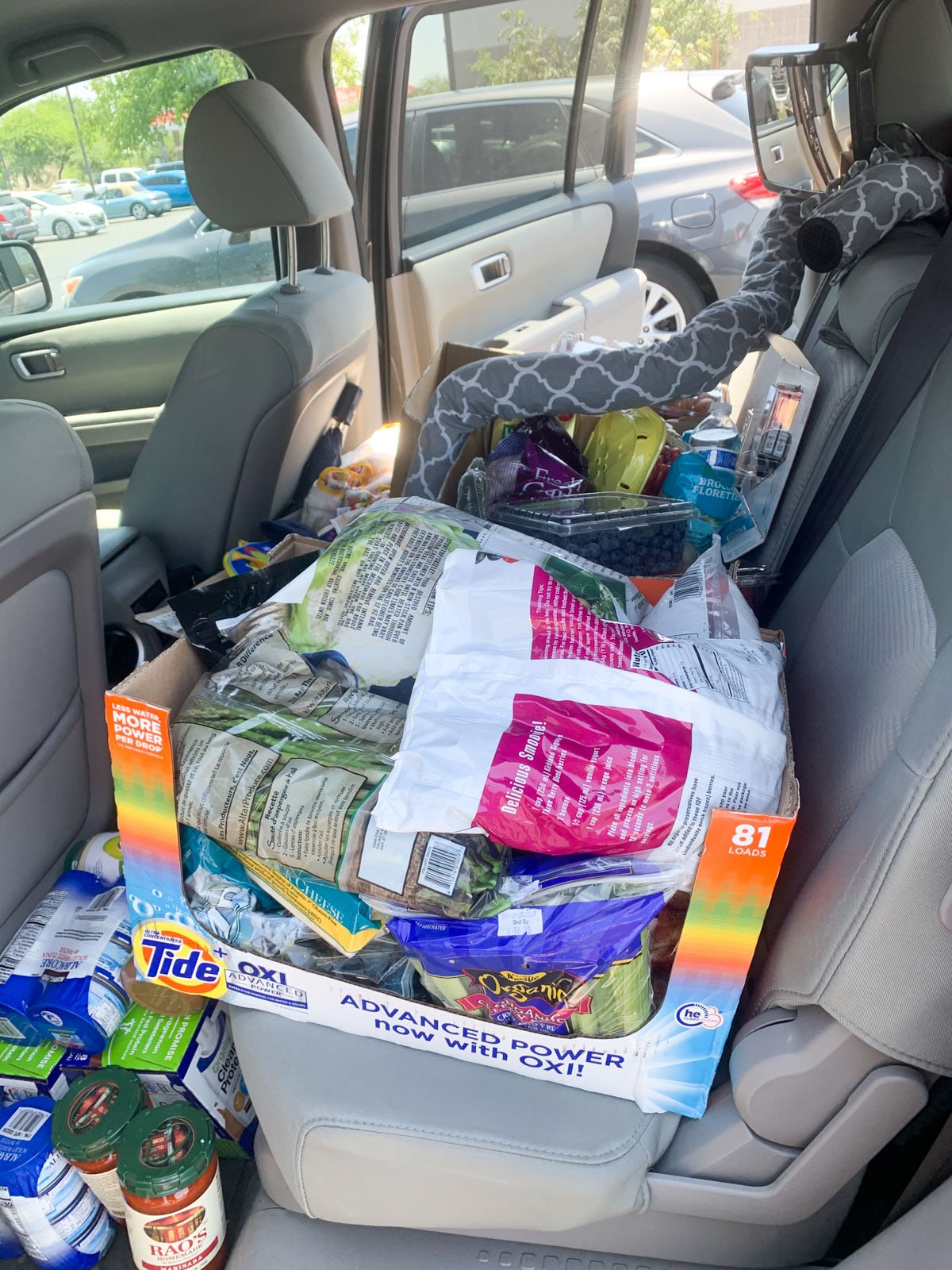 Okay, so I’m a little embarrassed to share with you how much I bought (don’t want you to think I’m an ender.) Here is the thing though, the events in the last few months have changed my outlook on what I think I need to have at home, especially for a family.  First of all, I have a tiny pantry, like just a couple of cabinets (compared to our other houses where we had legit pantries), and they were usually pretty empty.

For years I bought only what I needed for the week, I never “over-bought” and was frequently running out of things, but that was okay with me.  With everything that has happened in the last few months, I’ve been working on stocking up a bit more on essentials.  So, yes, I feel like I purchased the whole store, but now I have a real stoked pantry, it may be in my office closet, but whatever.

When we came home, after we put everything away, we had some Blue Apron Pesto Salmon and Roasted Veggies.  I didn’t take a picture of it, so here is a photo I shared on IG when I was photographing the Blue Apron meals for review of them the day before! 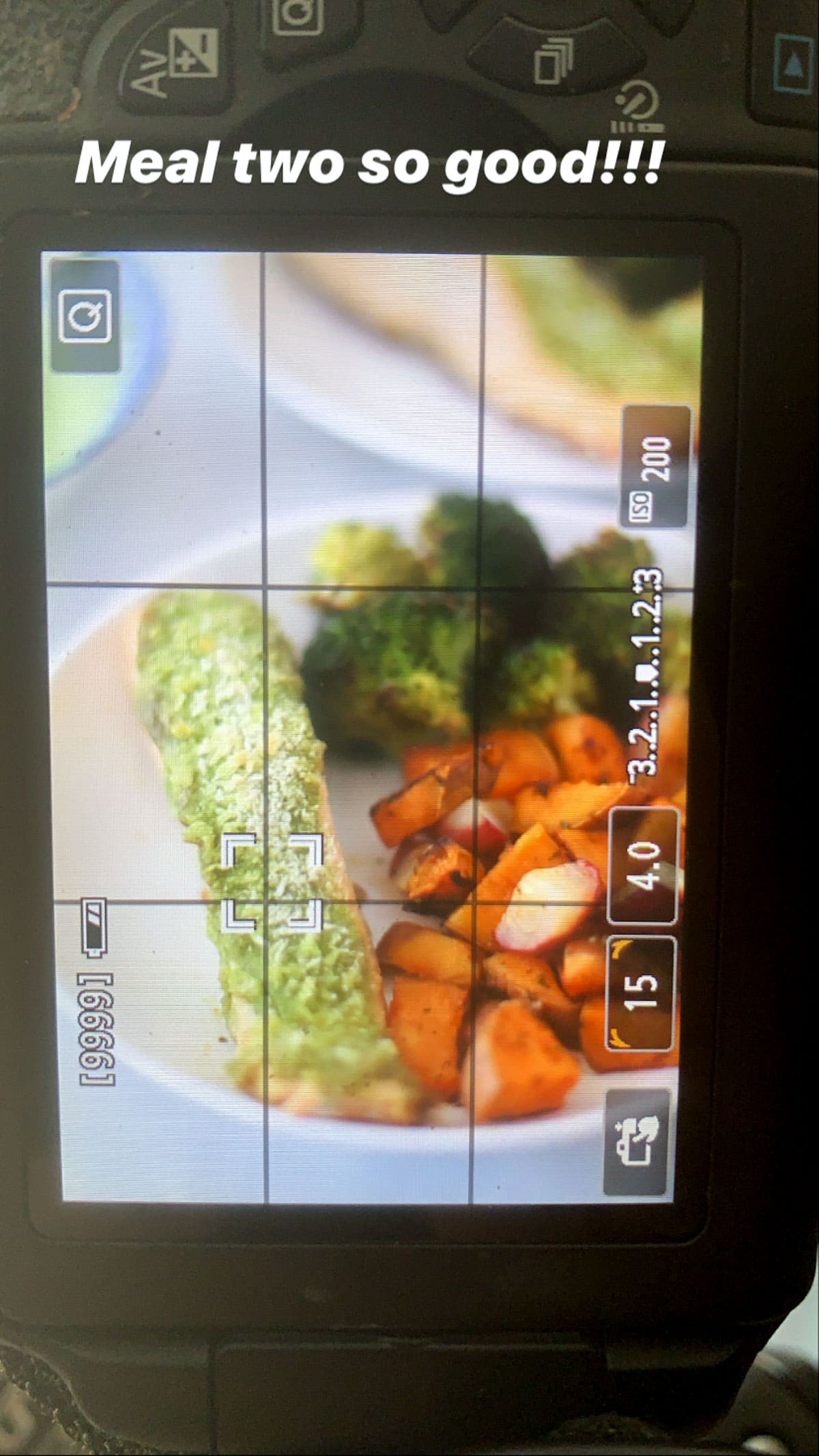 I spent the afternoon getting through email and scheduling social shares for a bunch of posts I did recently.  I also made my way through my personal email, business email, and school email, phew!  It always feels good to have a cleared inbox!

Little K was pretty fussy, so he had dinner SUPER early.  I think he was teething, overtired, or something because it was a rough afternoon for Mr. Hungry, so I took over at 5 pm for dinner.  He ended up eating a very nutritious dinner of veggie straws and PB & J. Teething is the worst! We spent some time hanging outside in the oh so lovely weather of 109 degrees.

When we came inside, KJ saw me snacking on some delicious homemade whole wheat sourdough my aunt made (I’ve given up on sourdough and from now on will be sourcing my sourdough from her) and he wanted some.  So he had a second dinner of toast and butter. 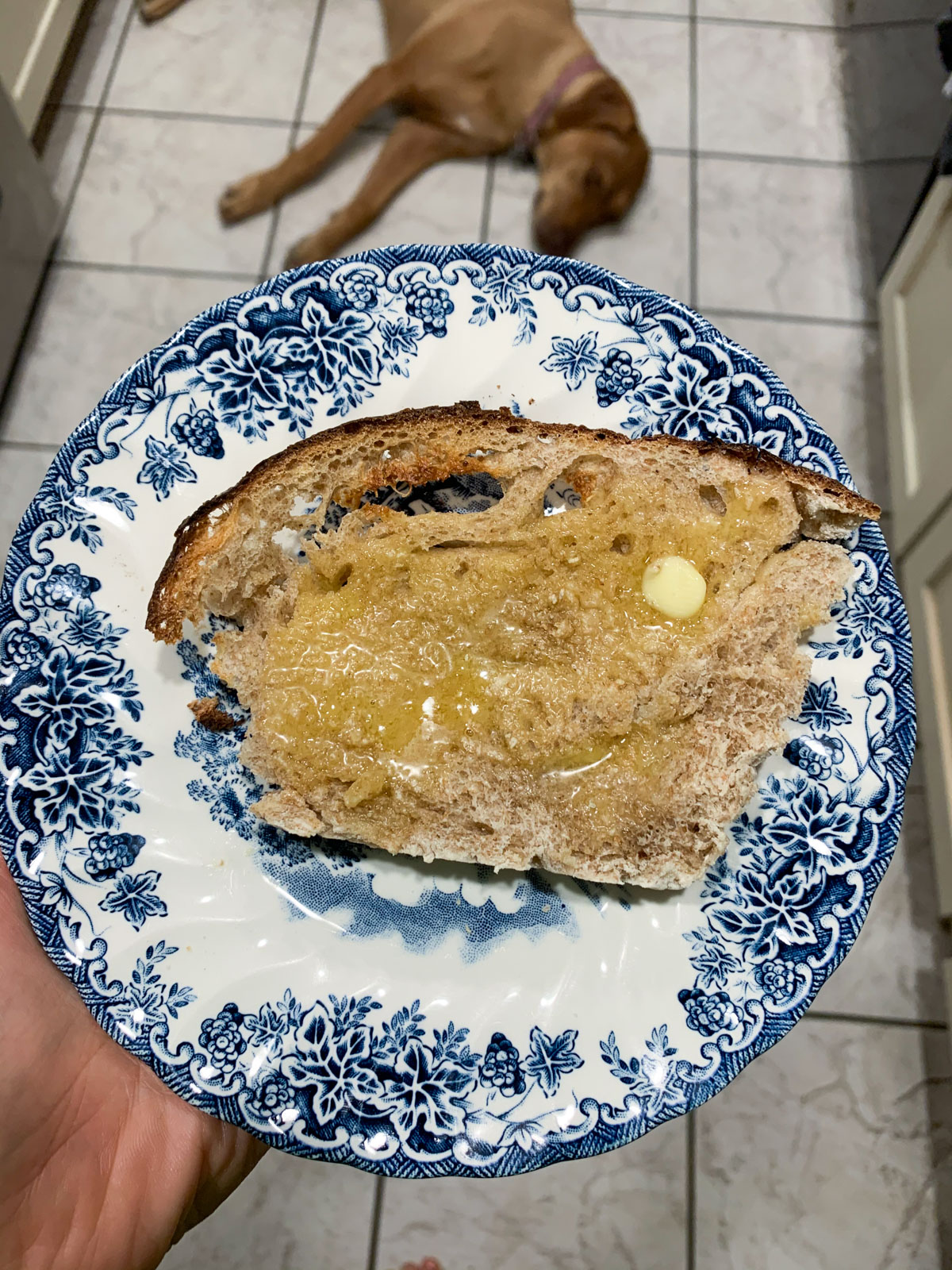 After bath and bedtime, around 7 pm, Mr. Hungry and I had a dinner of salad pack and Costco Cauliflower Pizza.  No way I was about to cook anything.

I ate a big bowl full of salad first (skipped the packet dressing and used Primal Kitchen Green Goddess dressing instead) then went back for pizza. 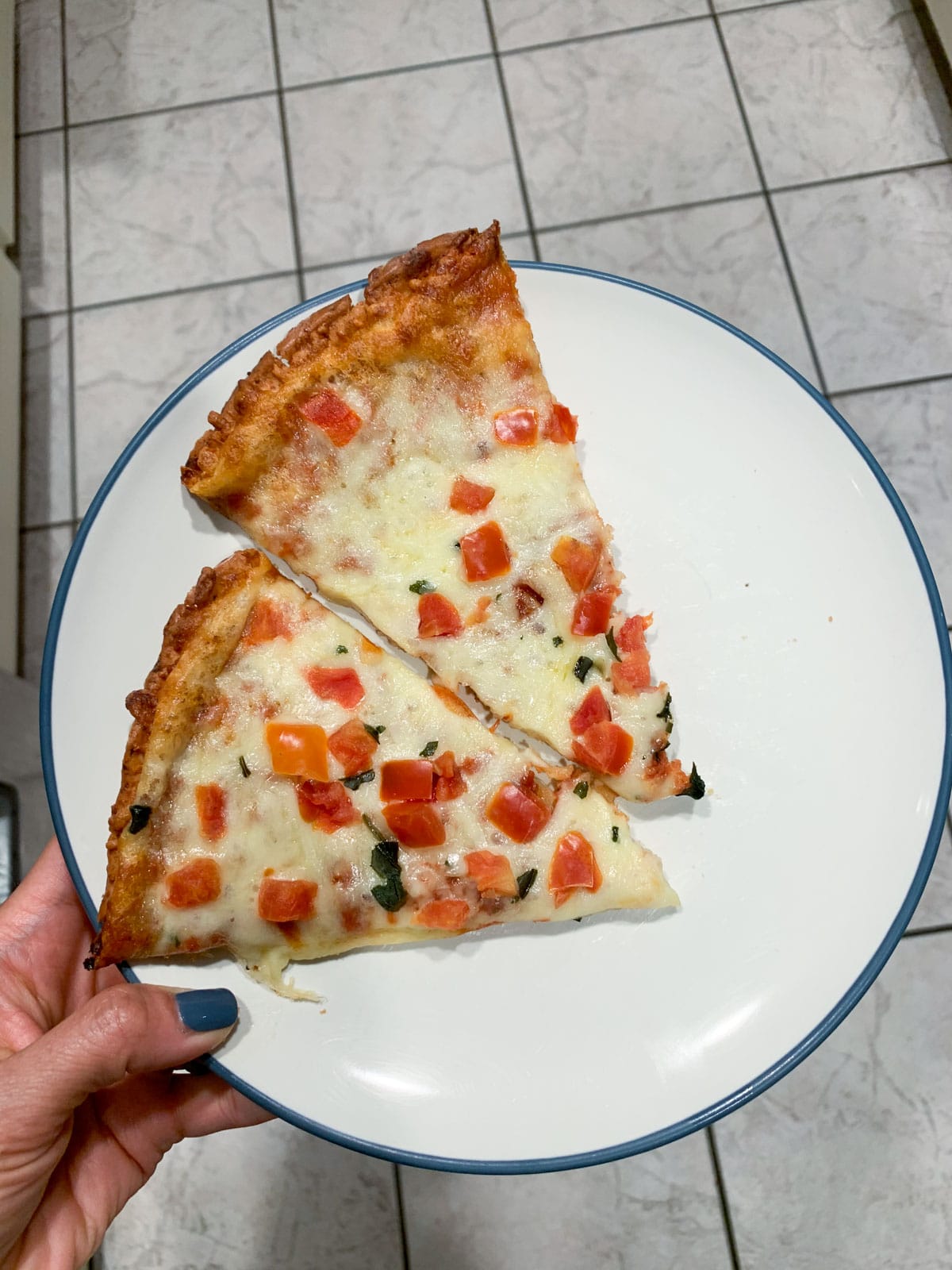 Drank with a spindrift. 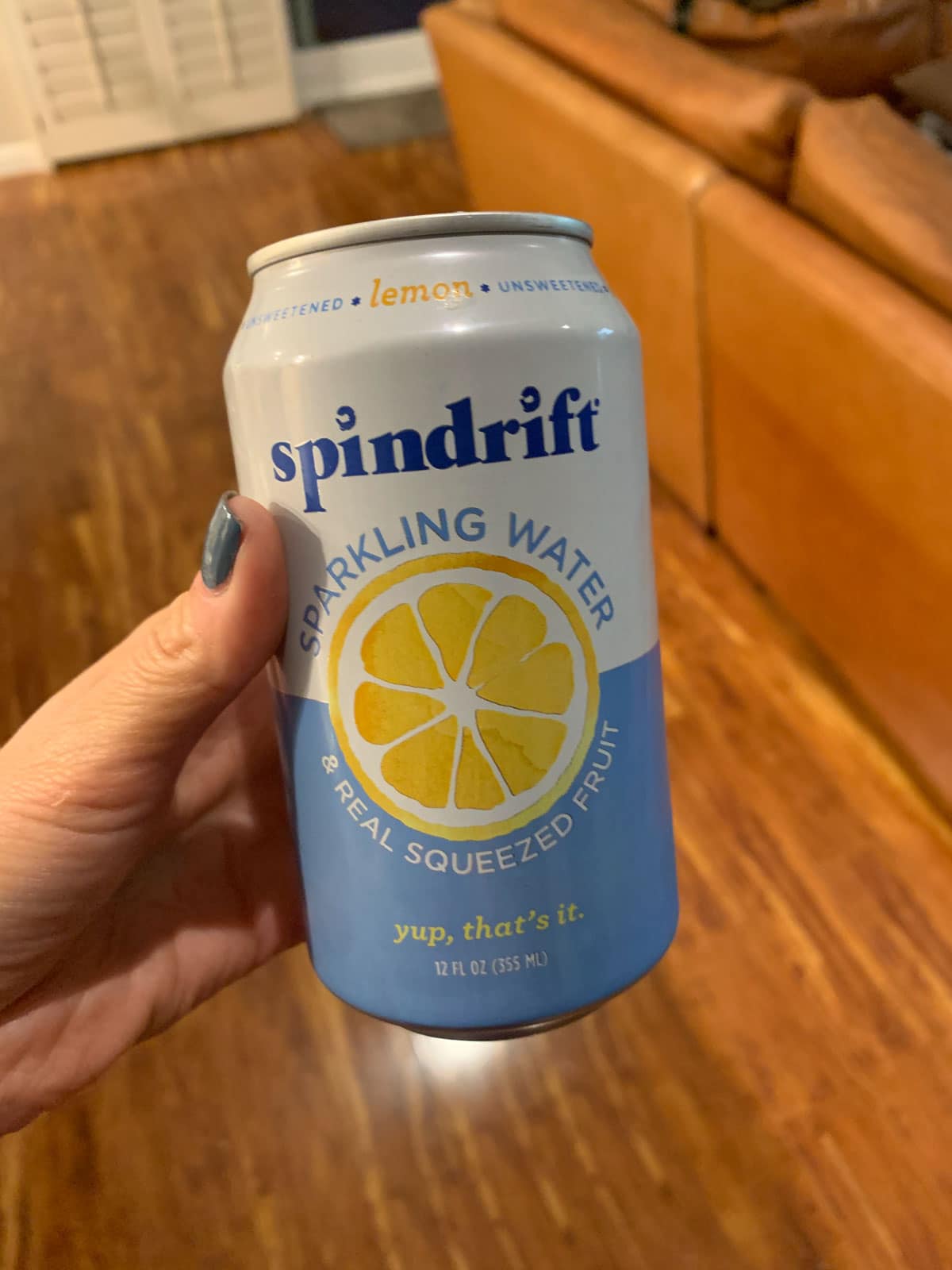 And a piece of dark chocolate to cap off the night. 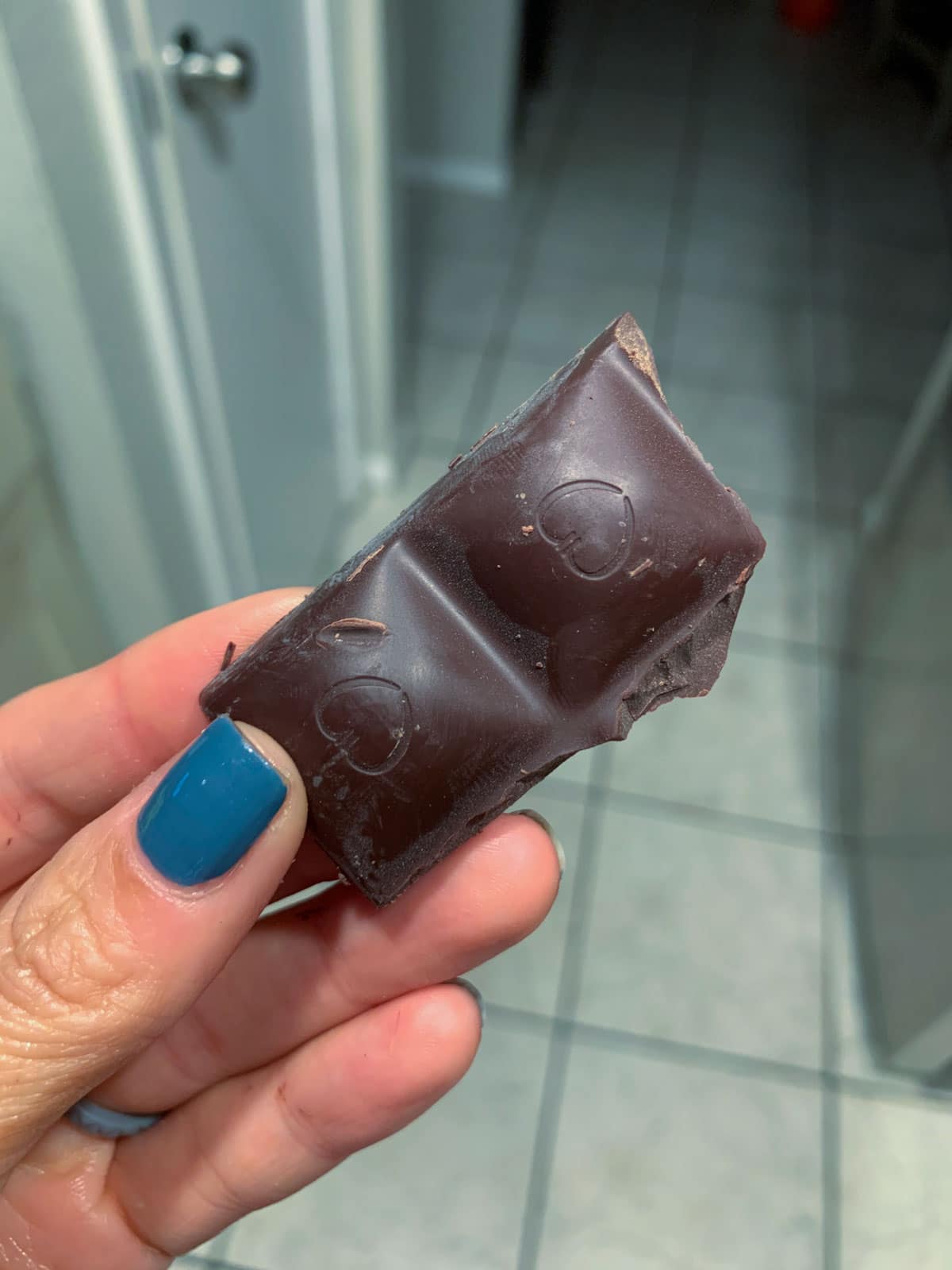 We watched the Hustle on Hulu while I started typing up this post, it was hilarious, highly recommend it!  What was the last movie you watch?