You guys said more DIL posts! So here we go!

I woke up at around 430 AM after five-alarm snoozes and made some coffee with collagen and ripple half and half.  Baby KK was up at 445 AM but played in his crib until around 530AM.  These early morning wake-ups have been frequent, and I feel like I’ve tried everything but the one thing that will probably fix the issue, switching to the one nap schedule.  He seems too young for that, but I feel like I’ve tried everything else! 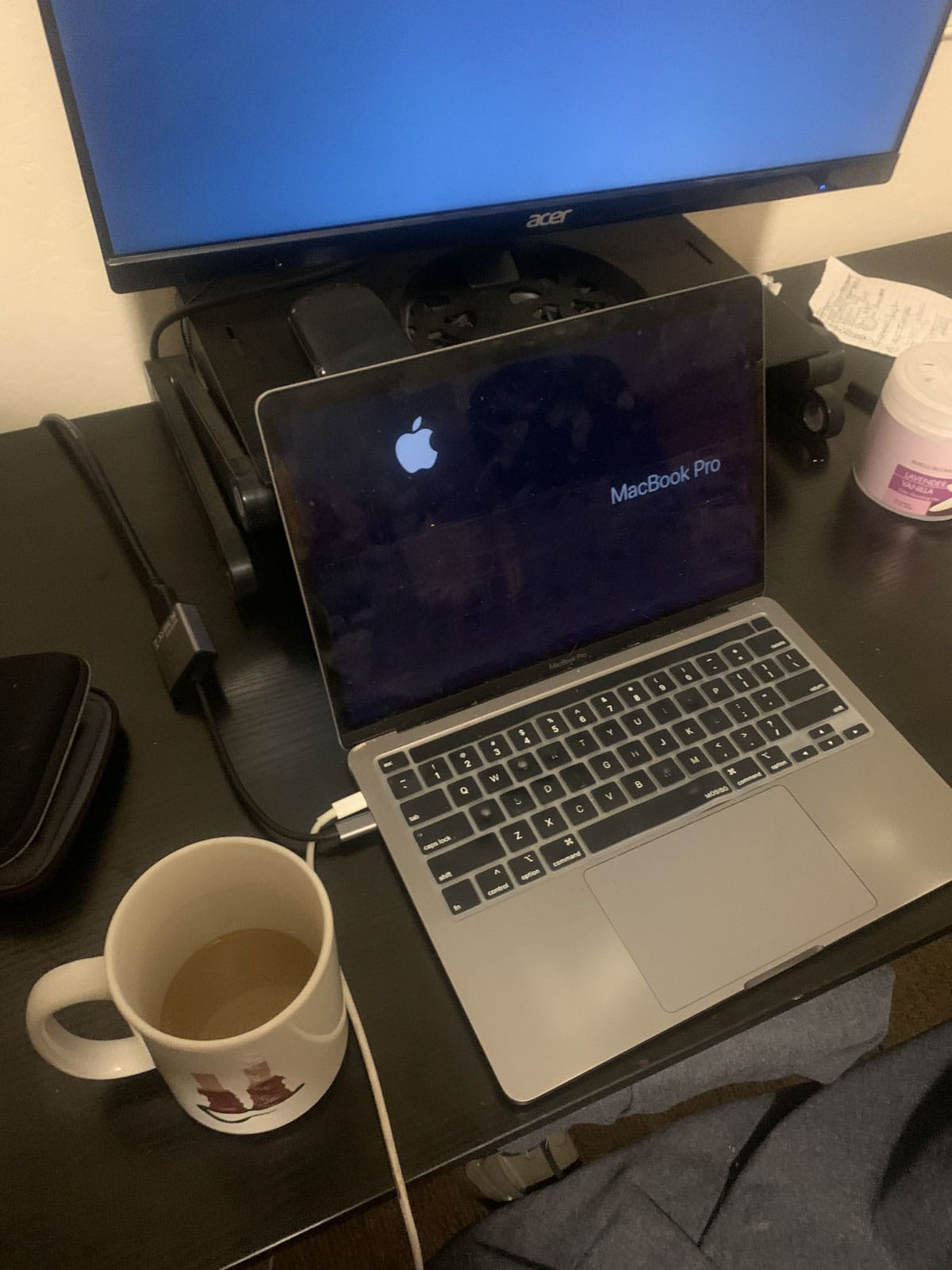 At 530AM, I got KK, nursed him, and got him ready for the day.  Then I brought him into our room to play on the floor while I got ready.   #getsintoeverything 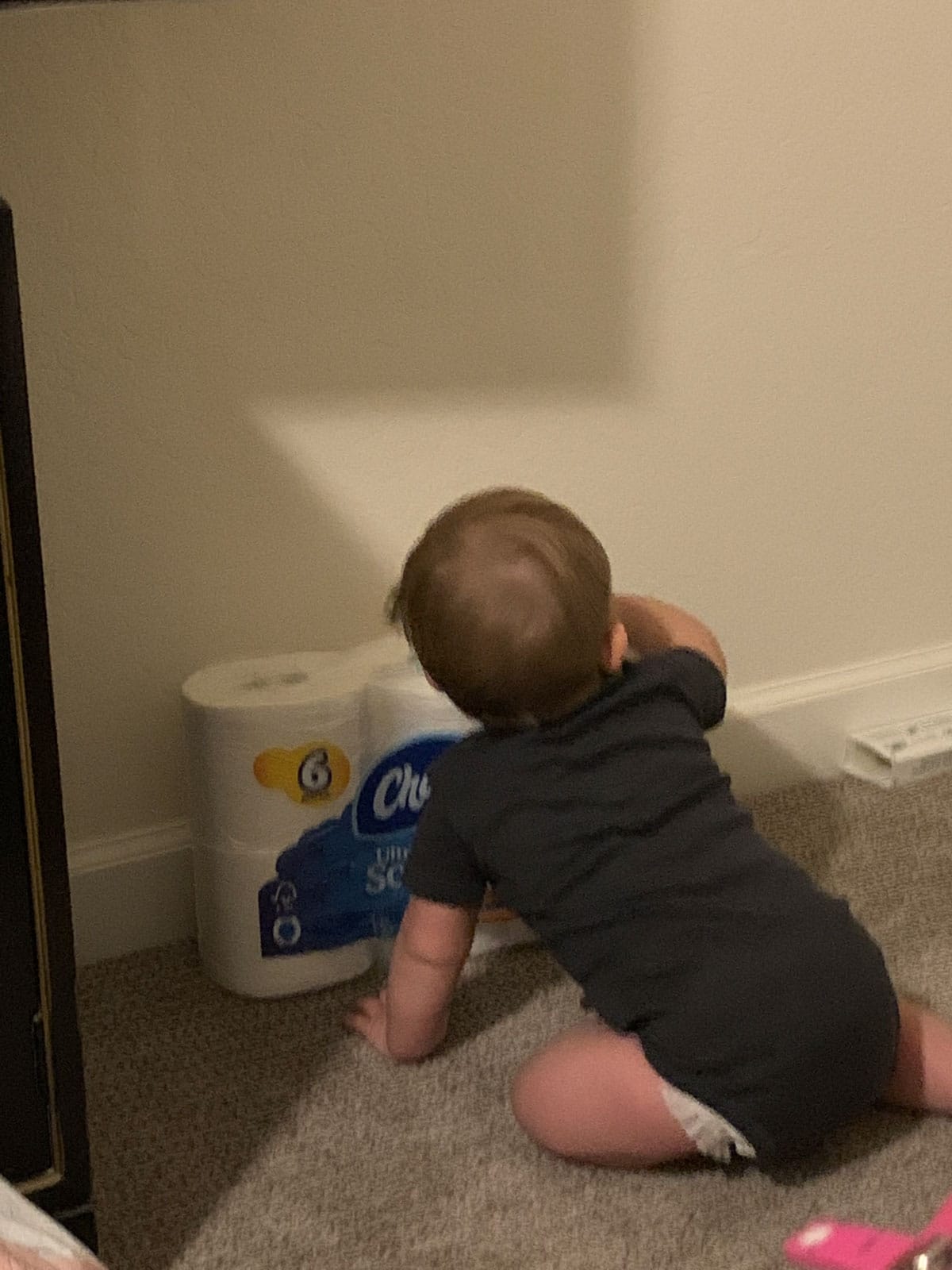 At 620 AM, I turned KJ’s hatch light green, aka “let him out of bed.” Once he was up, we went to the kitchen, and I made Smoothiebox smoothies for the baby, Mr. Hungry, and I.  KJ ate a simple mills chocolate muffin and two “crispy, fried” eggs. 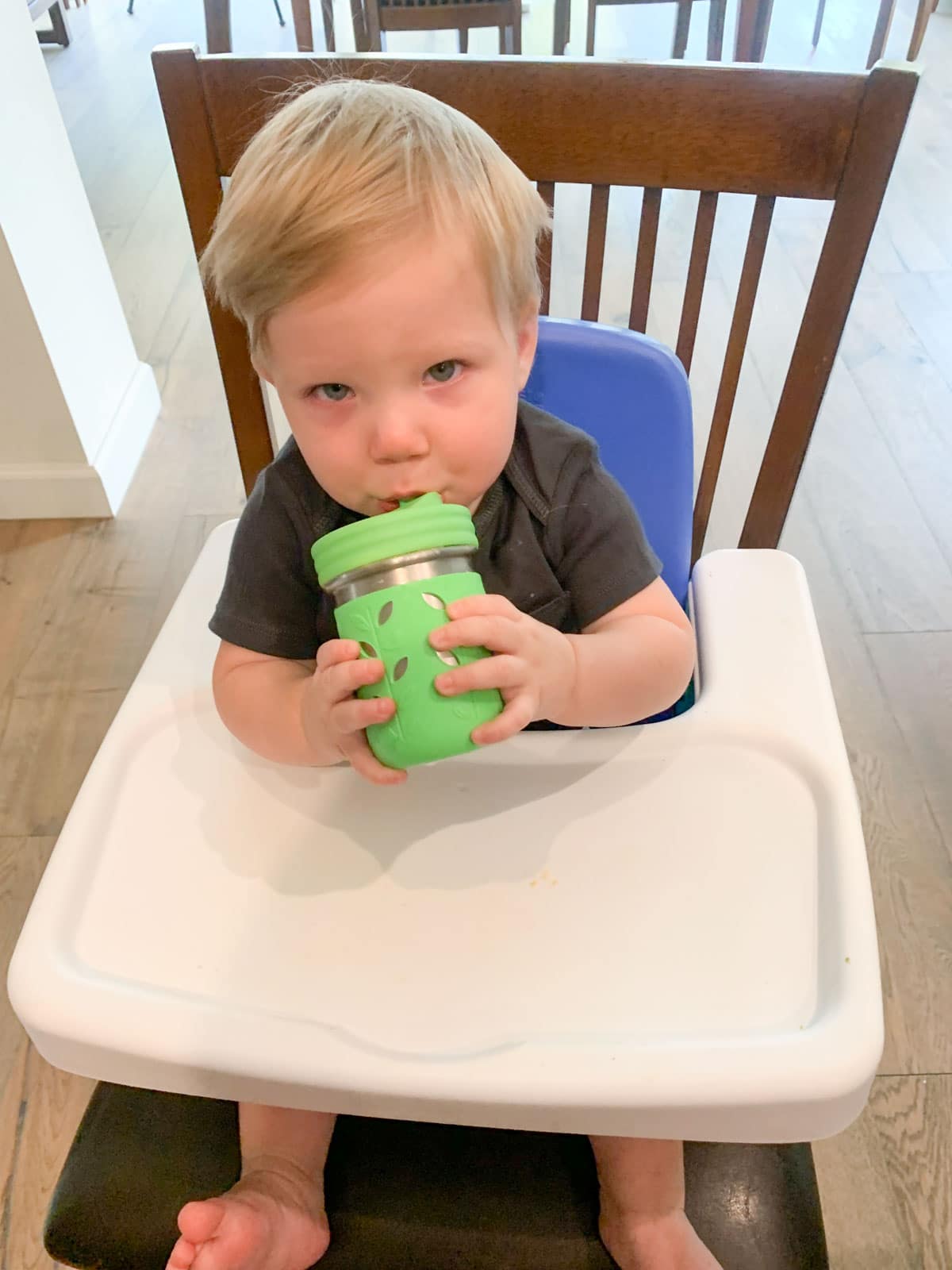 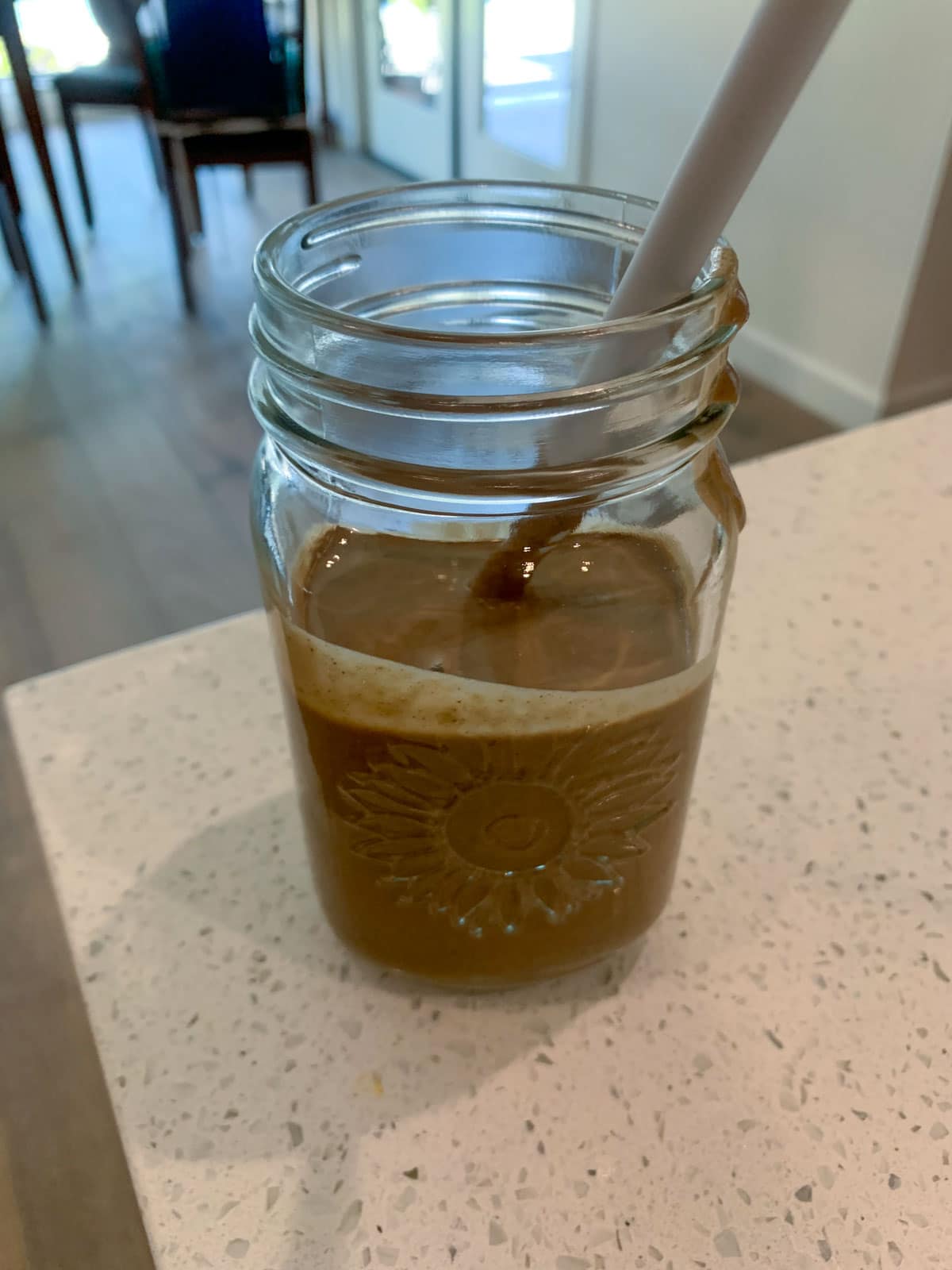 At 750 AM, I went on a very short 20-minute walk with KK. KJ preferred to stay home (there were adults present don’t worry haha.) 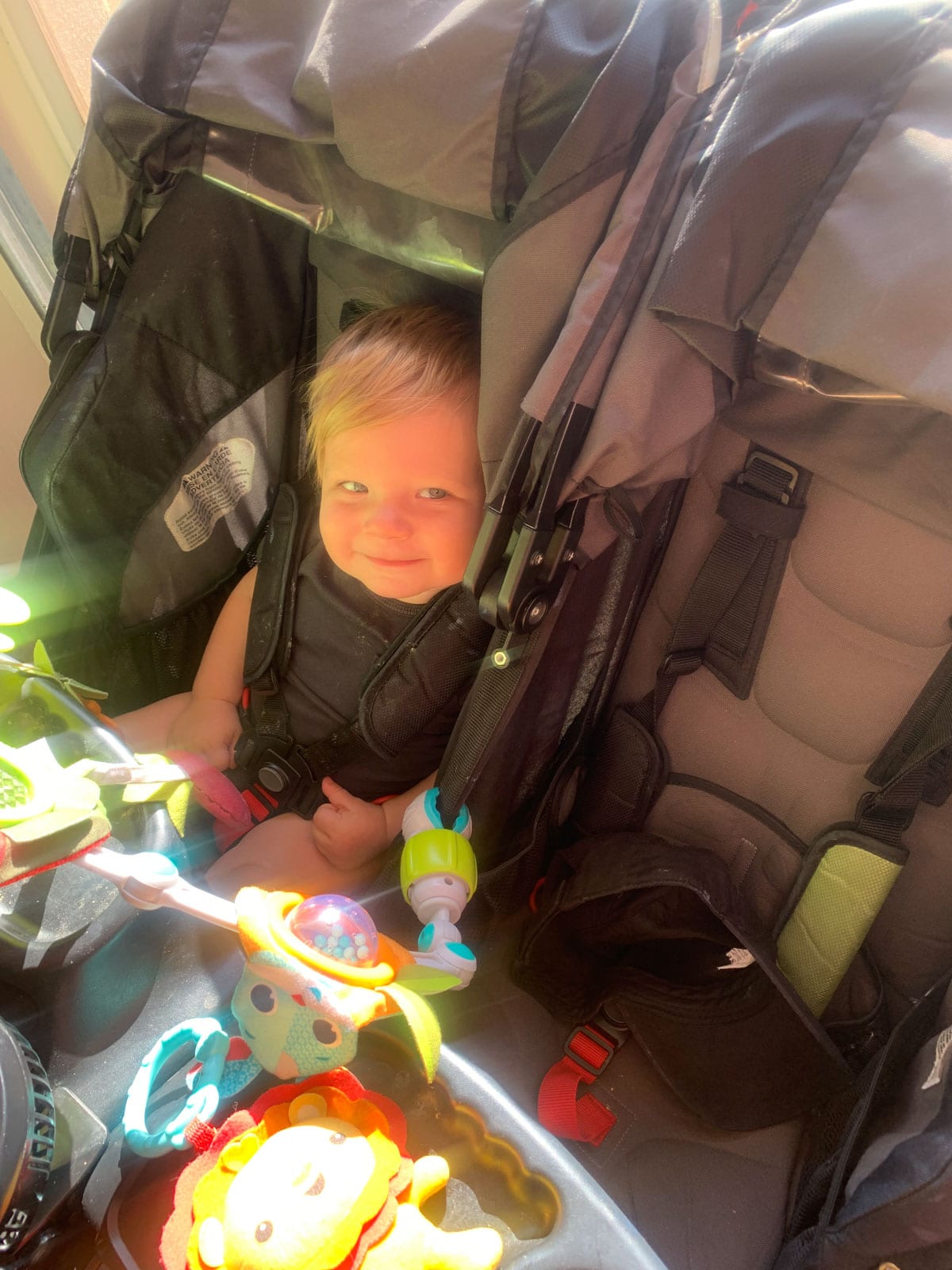 Around 830 AM, I nursed KK and put him down, then headed out for preschool drop-off.  (We are staying with family while the sellers in our new house complete their rent back, so there was family to hold the monitor while I was gone.)

Speaking of our new house, after school drop-off at around 915 AM, I swung by Starbucks and then drove around the neighborhood of our new house.  It’s so weird to have bought a home but not be able to live in it yet! But, it’s good for me to see it to remind myself that we will be back in our own space before we know it! This isn’t the first time we’ve lived in a temporary living situation between houses.  But, this time, we have kids, so harder for sure!

I made it home around 945 AM. I put the laundry away, cleaned up a bit, prepped the diaper bag, and checked my email. 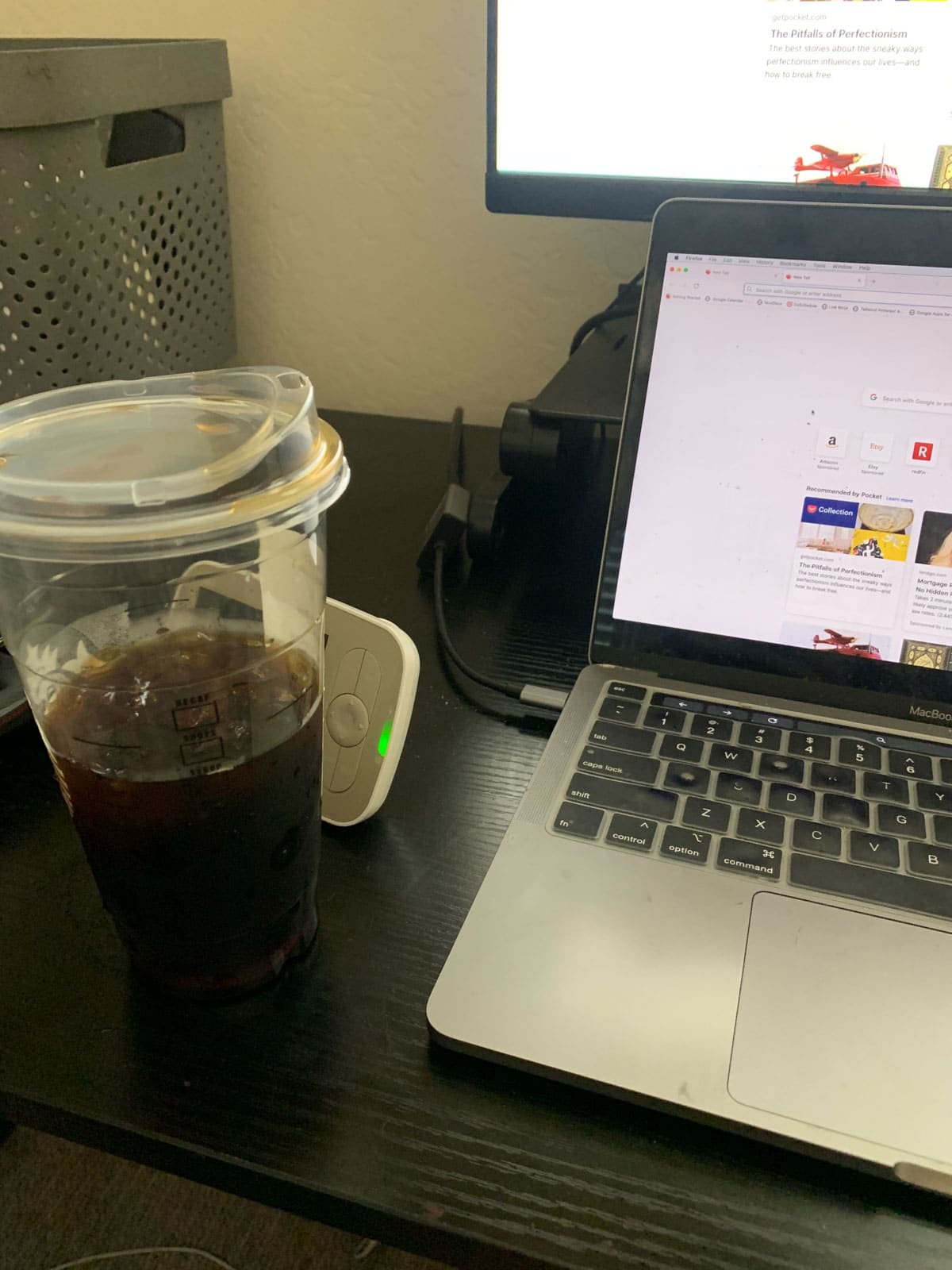 At 11 AM, I woke up baby KK and got him ready to pick up KJ from preschool.  I drank a protein shake and a KIND bar (c) on the drive to preschool. 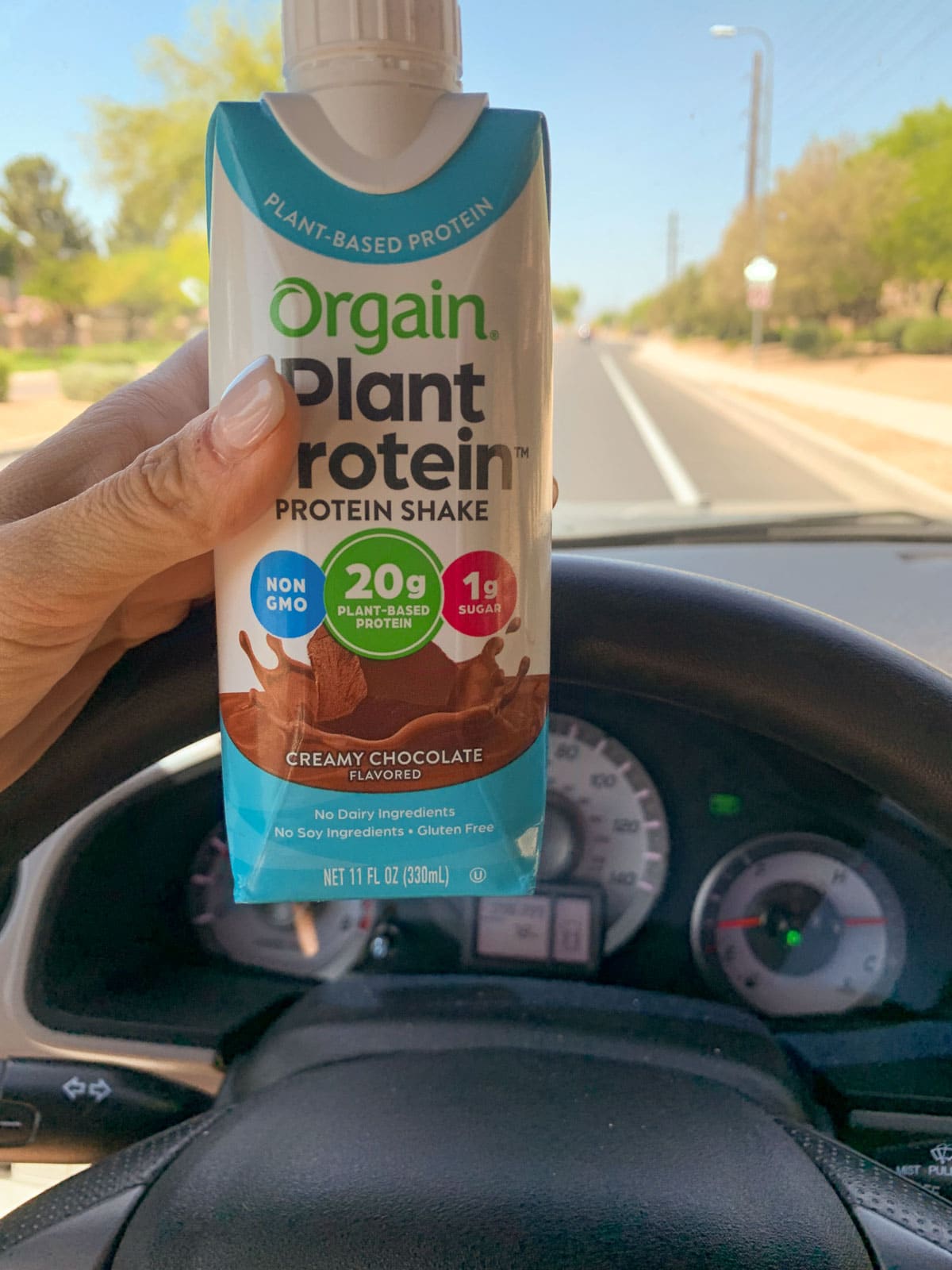 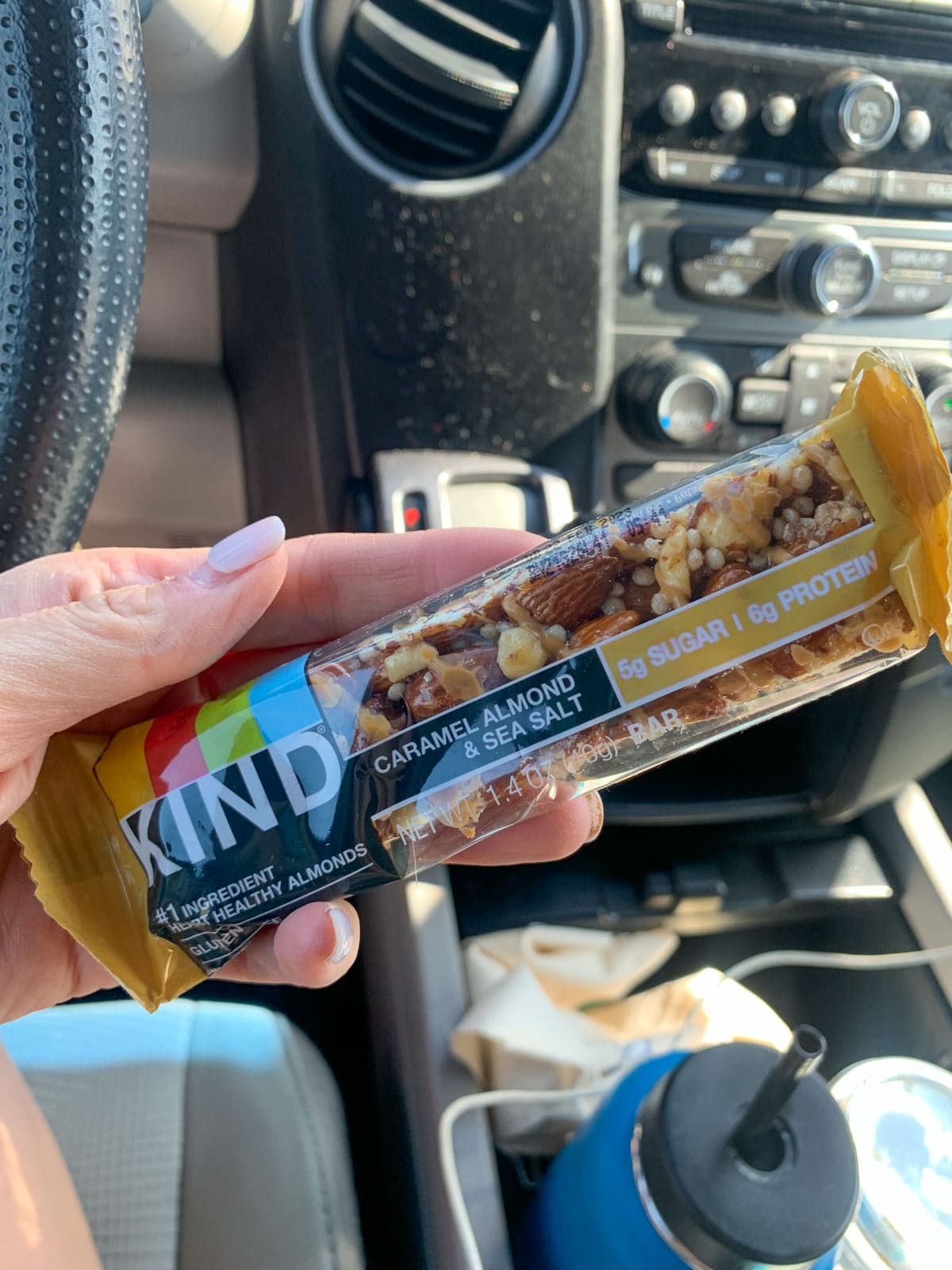 By 1145 AM, I had retrieved KJ from preschool, and after stopping for gas (whomp whomp), we headed to the aquarium where we would meet my mom (aka Grandma Lee Lee.)  My mom had saved me a shady spot with her car so it wouldn’t be too hot when I put the kids back in that afternoon. Seriously so sweet.

My mom hadn’t seen the kids in a couple of weeks since things had been busy since we moved, and we are far away from her.  So, she gave the kids their Easter presents before we headed in.  We spent about 2.5 hours at the Aquarium, and KJ was in heaven! His favorite show is octonauts right now, so he knows all about anything aquatic-related.  He kept saying each different display had his friends in it.

Most of all, though, he LOVED the stingray exhibit.  He talked about it till we got there and after too.  He couldn’t quite reach to touch one (even lifting him), but he sure loved watching them! 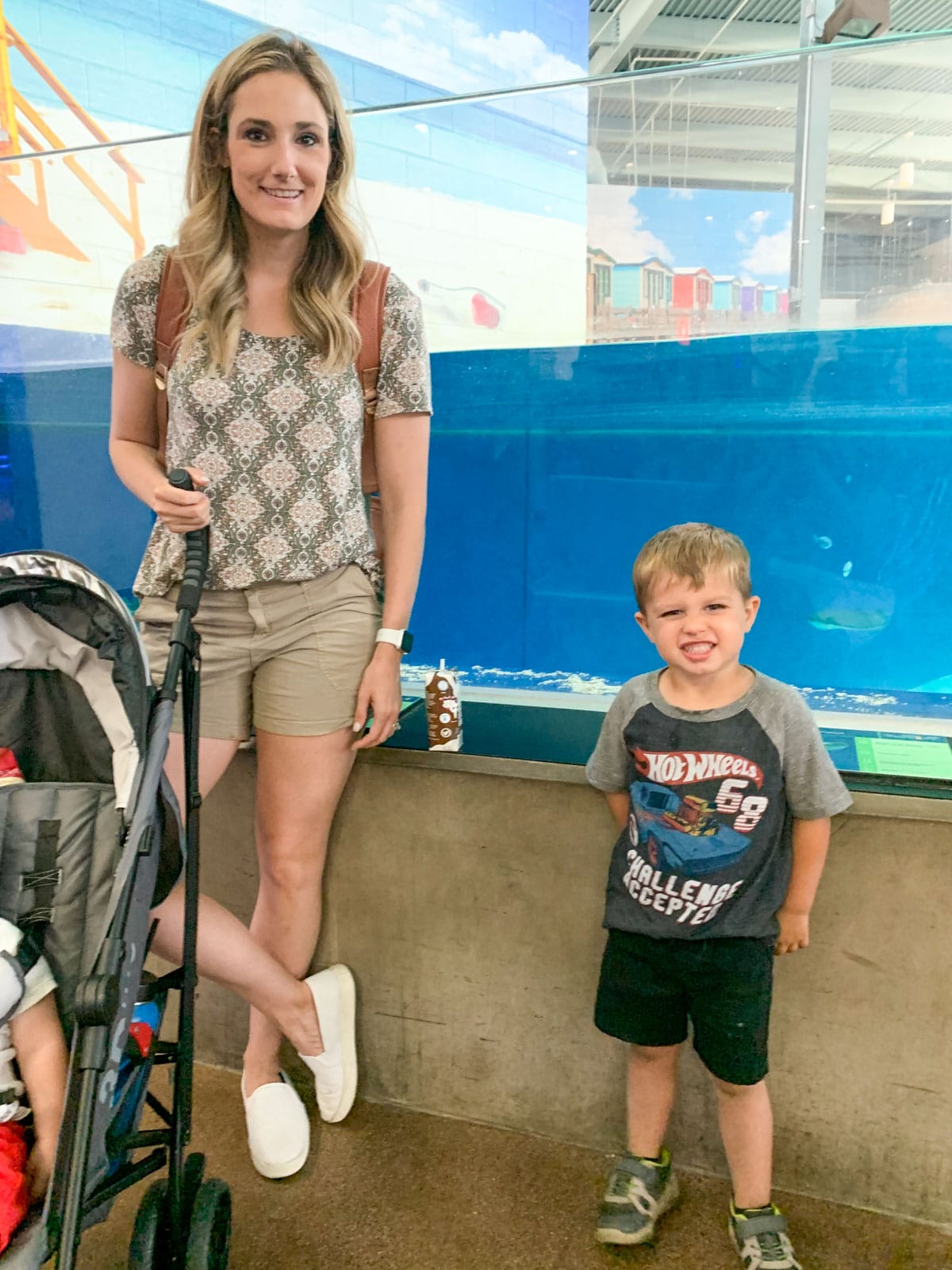 KK ate two applesauce packets and a fig bar while we were walking around.  KJ was too excited to eat anything, but I convinced him to drink some chocolate milk and baked potato chips we got from the concession stand.  I figured this would happen since he eats a late snack at school, which is why I had my snacks before we came.  However, when we walked out, I felt really hungry, so I ate a Justin’s Almond Butter Pack.

We headed back at around 315PM.  KJ watched Secret Life of Pets 2 on his Kids Fire Tablet (would not recommend, ours is very buggy), and KK took his second nap of the day.  We were back around 350PM.

I sat down and drank a diet coke (my coffee had long since worn off) and rallied myself for the dinner/bath dash while KK played on the floor and KJ finished watching his TV time.  I also ate a jerky stick from my Thrive Market box. 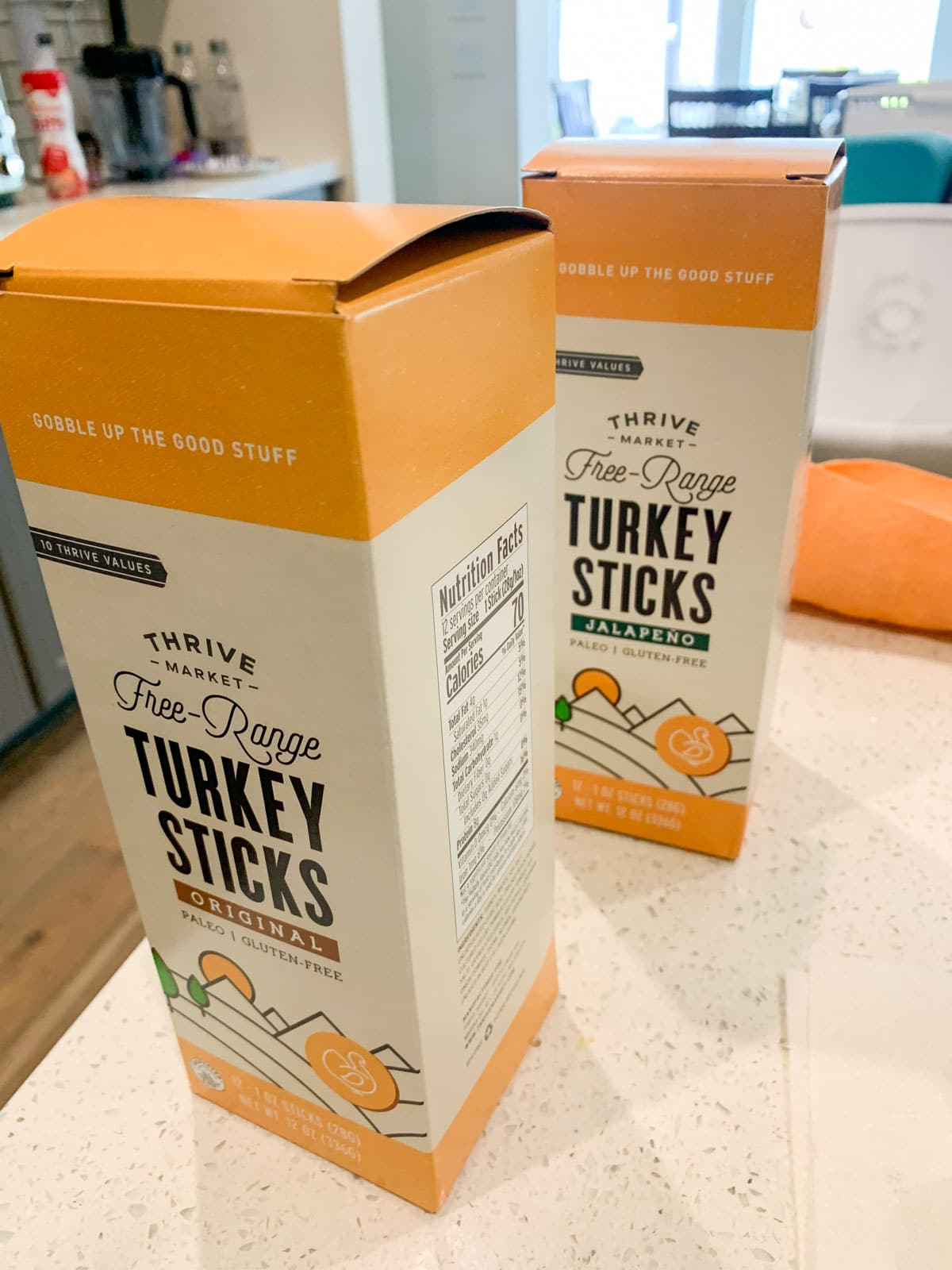 (I feel like I need to interject my thoughts about diet coke here.  I drink it, but rarely and we don’t keep it in our home.  If we have soda in our house, it’s usually Zevia, but where we’re staying had it, and it just hit the spot.  Regular consumption of Splenda is linked to gut microbiome changes, increased weight, etc.  But, rare or occasional consumption is unlikely to do any harm!  I just thought I’d share that in case you’re a client reading this like she had WHAT?!?!? haha )

445PM, I started dinner. By around 530PM, we were eating.  I made air fryer blackened salmon from the Skinnytaste air fryer cookbook and steamed asparagus. PS do you salt your asparagus before or after steaming? I’ve always done it after, but before is so much better! 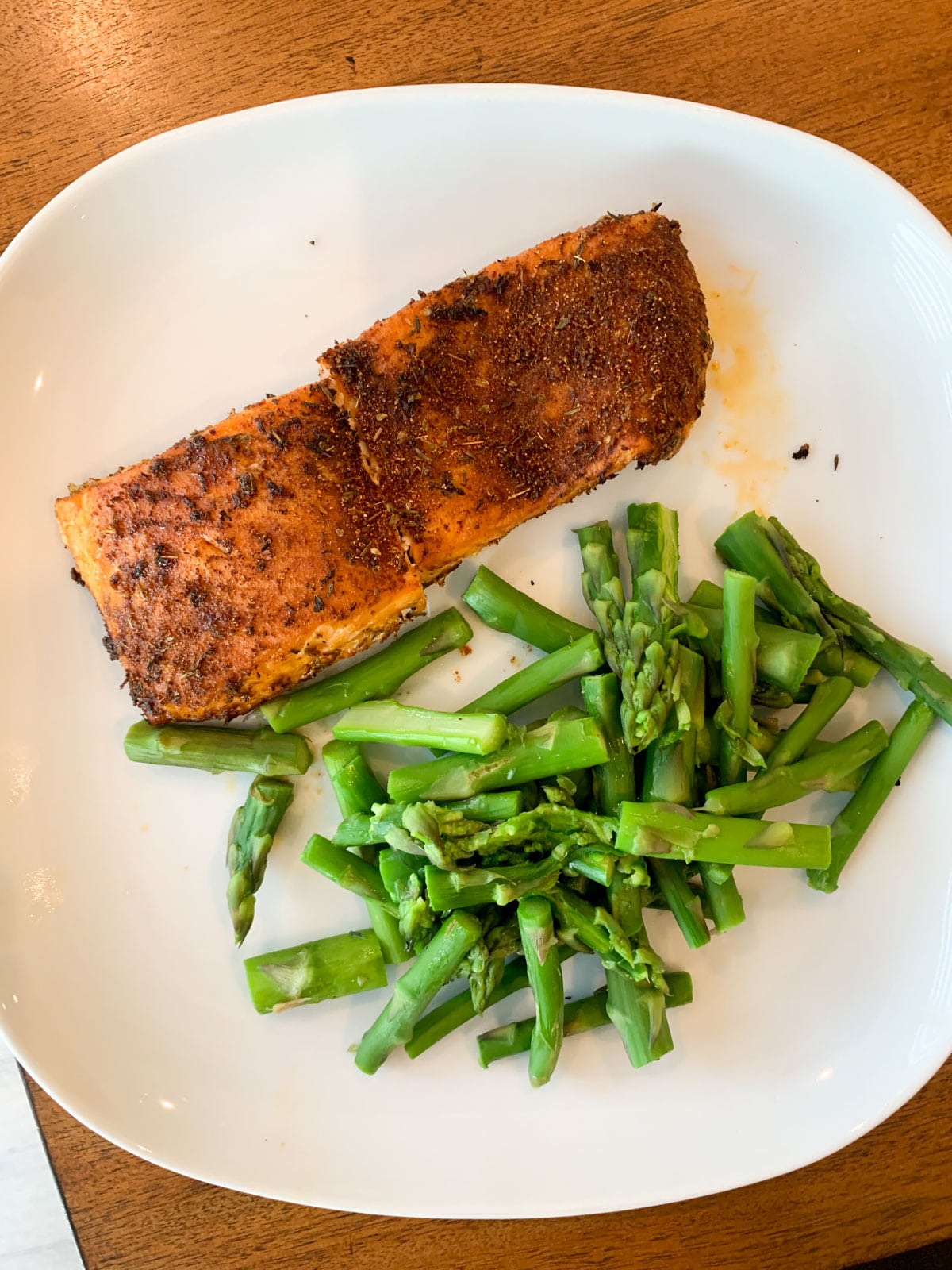 After dinner, it was bathtime and bedtime routine for both boys.  Mr. Hungry was working late, so I had some help from family that I wouldn’t typically have, which was nice! KJ was in bed first, followed by the baby.  I was feeling snacky after dinner, like raid the cabinet snacky. I found myself sticking my hand into the candy jar, popcorn bag, etc., Not eating a lot, just a piece or two of each, but I asked myself a few questions:

Maybe no to all of them, but the water I could at least rectify right then.  I chugged 60 ounces of water, so it turned out I was thirsty.  After that, the snacky feeling went away. I didn’t feel called to the kitchen at all.  Even I was surprised by how well that worked.

I watched Master Potter with the fam and fell asleep on the couch at 8 PM.  I was in bed by 845PM.

Note about Dessert with Dinner:

PS for those of you that are like, man, I wish my kids would eat what we eat.  Some nights KJ eats nothing except a few sips of milk. I figure he isn’t going to starve off missing one meal.  We worked HARD and dealt with many tantrums to make the rule that he eats what we eat and there are no exceptions.  He gets fruit on his dinner plate that we typically don’t have, but that’s it, and he does usually get to pick the type of fruit (tonight was a date.)

Dessert is not a nightly occurrence, but when we have it, I serve it alongside dinner (like with the Easter candy.)  Many people use dessert as a reward to finish dinner or eat more substance.  My personal and professional belief is that this creates food power struggles where there shouldn’t be. I believe that it’s my job to decide what and when I serve food. Likewise, it’s my kid’s job to determine how much they eat off the plate.

Food bribery teaches your child to override their hunger and satiety cues in order to get the reward.  IE, they must eat past their hunger levels to get that reward.  It also puts dessert on a pedestal, making healthy food seem less delicious because now it’s a means to an end (to get the dessert.) I know that many people use dessert as a reward for eating a good dinner.

Mr. Hungry and his siblings had this rule growing up, and they have no weight issues or food-related issues.  However, I work with a TON of clients who have those issues related to this rule, so I avoid it for my children.  I could write an entire blog post on this one topic, but those are my abbreviated thoughts on that for these purposes.