I’ll preface this by saying as a first-time parent that, I felt constantly torn between not knowing what I needed and what I didn’t need. People would say things to me like, “ya, but you can only use it a few months.” With my first baby, I quickly learned that sure it’s just a few months, but those few months of low sleep are survival mode, and it is worth it to have some items you only use for a few months. Likewise, I learned that some of the items I skipped to save money the first time were not worth skipping in round two. That being said, I’m going to preface each of the sleep products by saying that KK (nickname for our second baby) is a naturally better sleeper than our first was. However, even “good” babies are still babies, and all babies are some level of challenge. 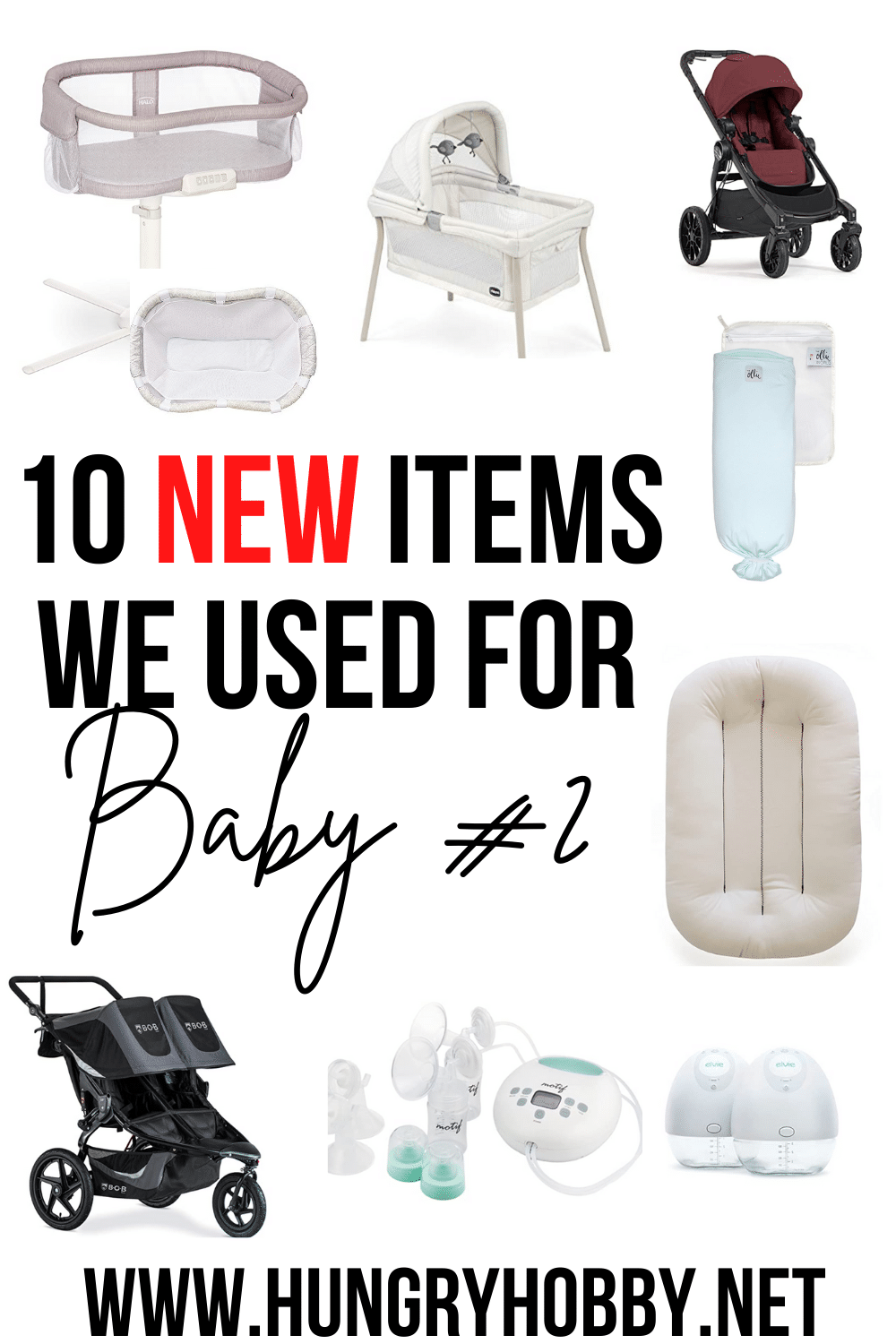 This list includes our favorite “new to us” items we’ve used with baby #2 for the last 9 months. 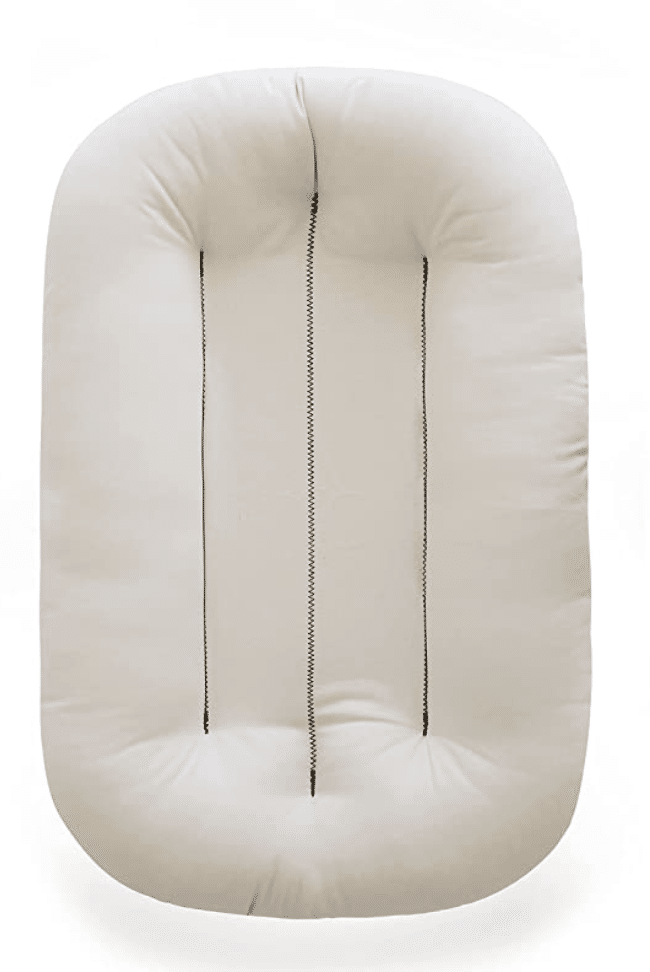 The Snuggle Me pillow was a huge winner for us for daytime naps. He slept a lot in the Snuggle Me Pillow out in the living room for his first month of his life. The second month of his life, he would take at least one long two-hour nap a day, and it was usually on the pillow. Month 3, he used it sparingly, and by the time he could roll, the use of the snuggle me decreased significantly. But, the first three months of heavy use made this product worth it! 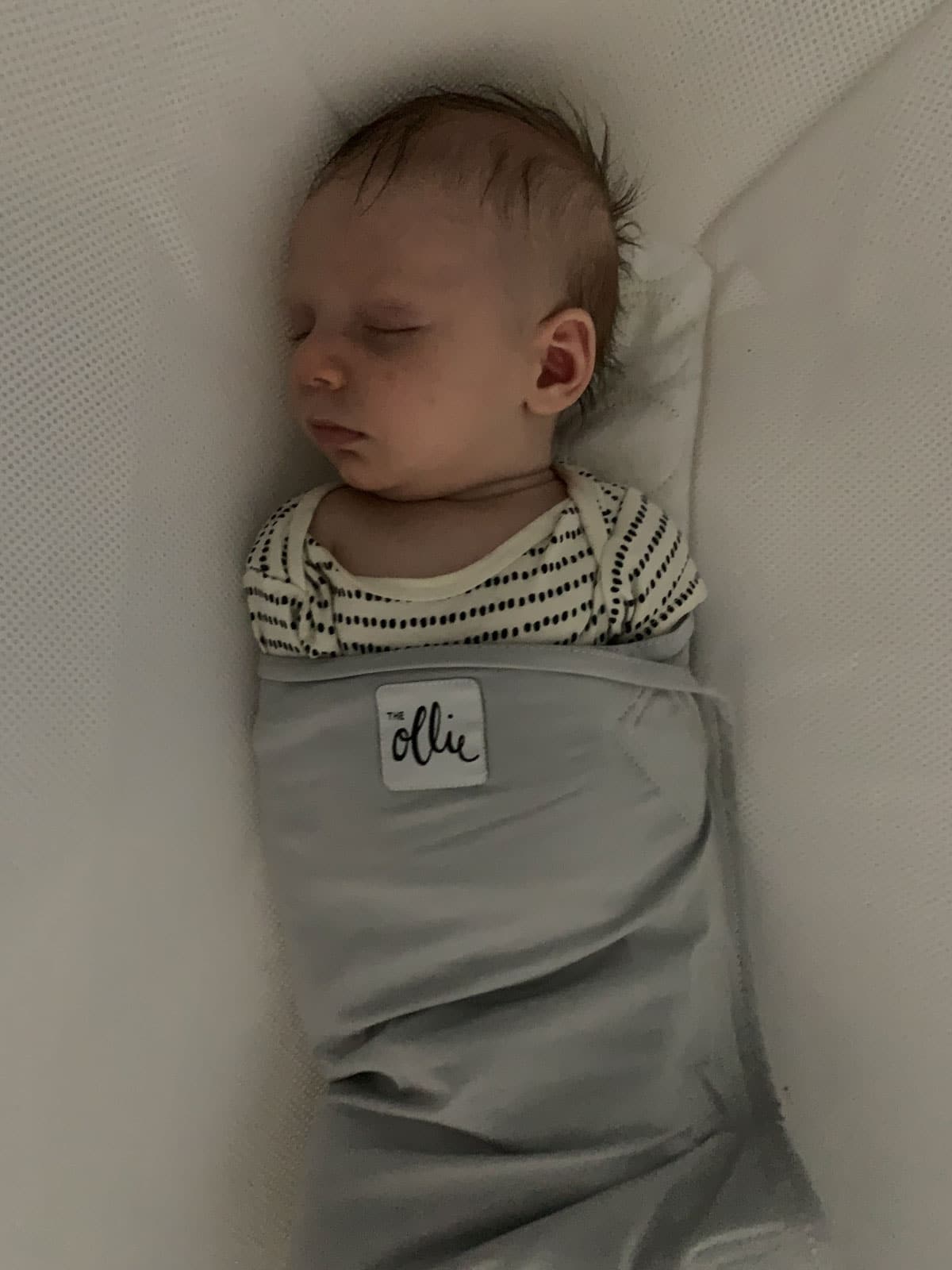 I’ve had envy over the Ollie swaddle ever since I saw them on Taking Cara Babies. They are often sold out, but I pre-ordered three of them. They ended up being the only swaddles we used, the ones I used for KJ never made it out of the drawer. If you can get them (they are forever sold out), we loved using them! 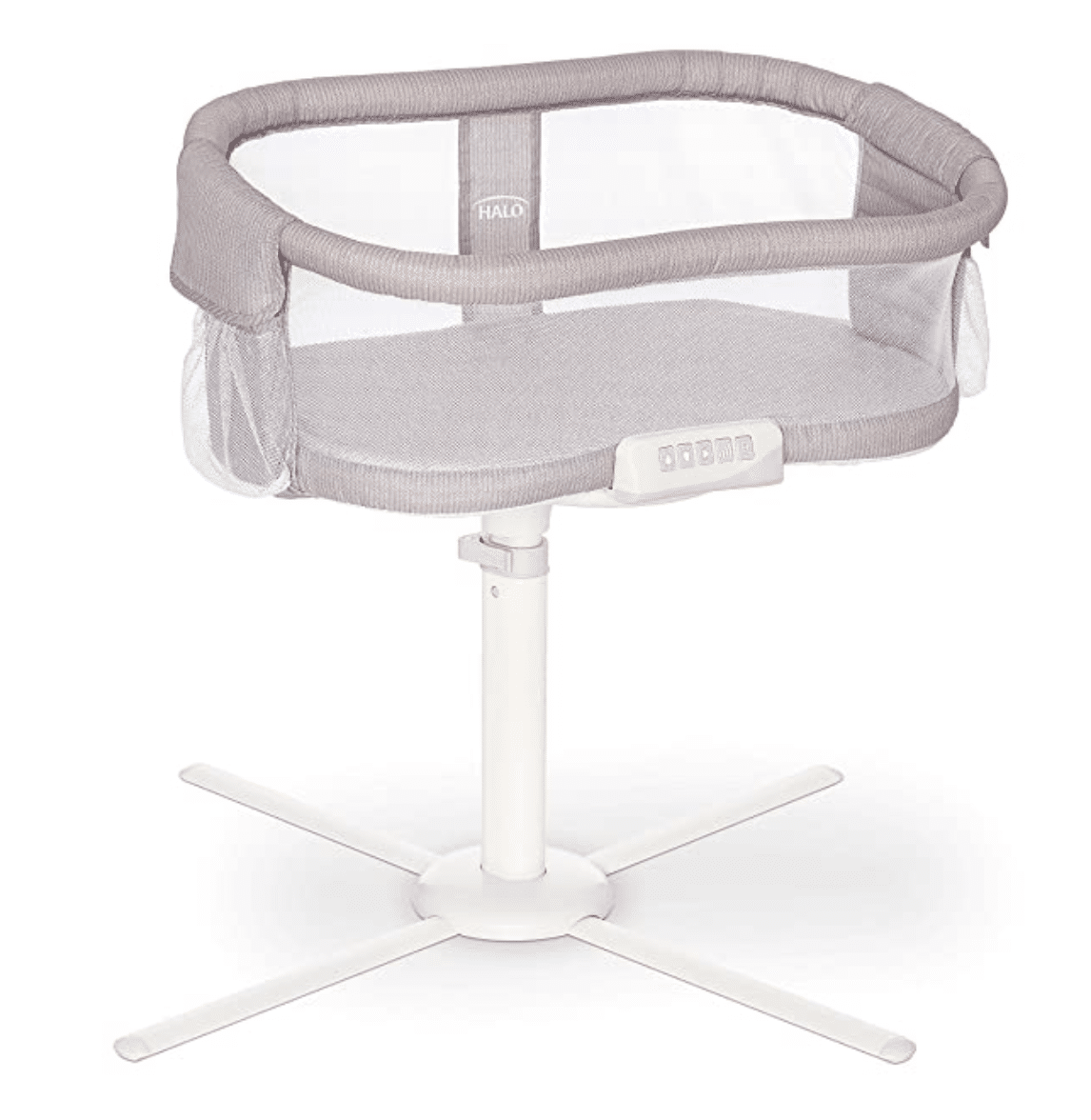 Okay, so for KJ, we used the bassinet part of the pack n play, which I think contributed to KJs poor sleep. If KJ moved at all, the whole thing would shake, waking him up. So having an actual bassinet felt like a luxury item, haha  I loved how I could swivel him right over the bed next to me. The newborn mesh sling was also a cozy place for him to sleep until he was 8/9 weeks old (see the photo above of him in the ollie swaddle – he’s sleeping in the mesh sling!) The downside of this bassinet is it does take up a large footprint and doesn’t exactly store easily, but other than that, we loved it, and I wish I would have it for KJ. We also used the vibrate function to help him fall asleep on his own. Which, admittedly, didn’t work out too many times, but the times he did was with this feature in use! We have the premiere series, and for what it’s worth my friend who has the luxe said she never ever actually used the removable bassinet feature.  So…. that may not be worth it, although the luxe does look nicer. 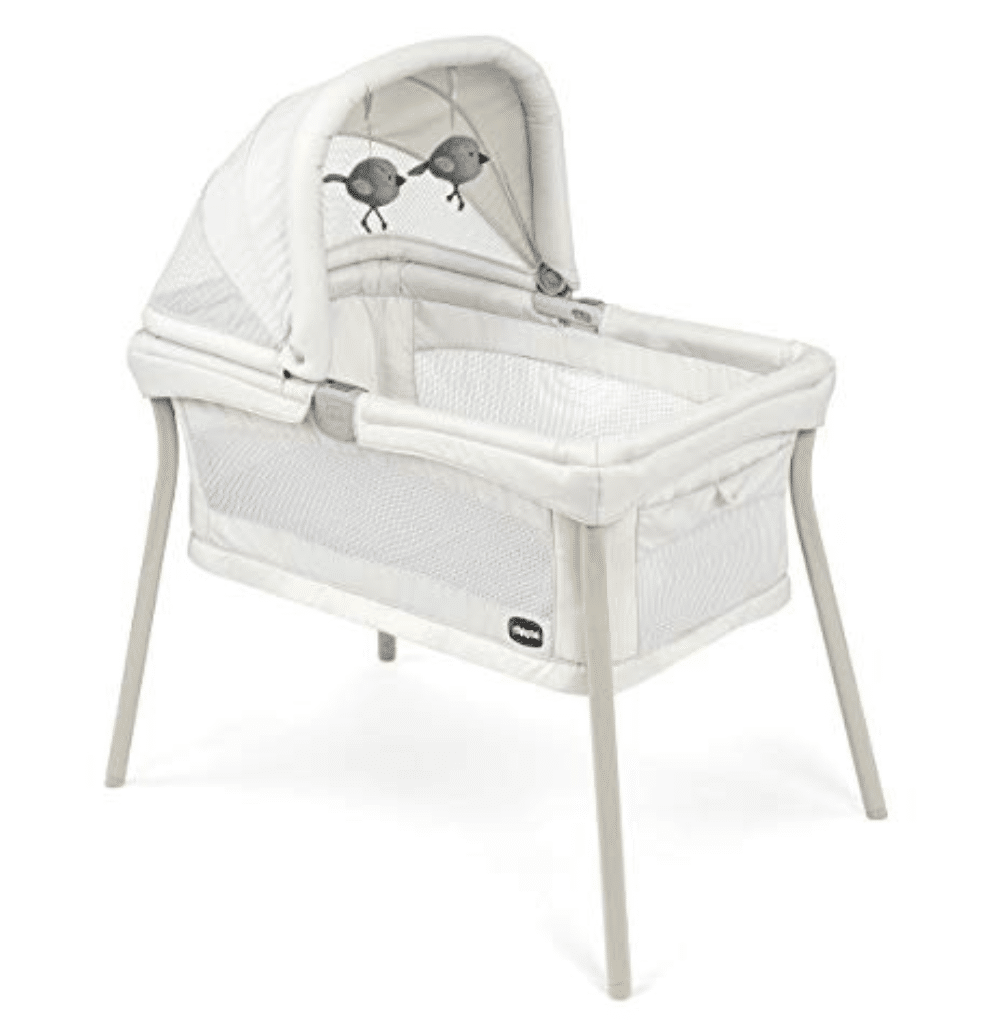 We bought the Chico LullaGo nest portable bassinet for the baby to sleep in on our California trip when KJ was 8.5 weeks old, since KJ still needed to sleep in the pack n play. We ended up using it several more times to go up north to visit my aunt and uncle. We also used it over the holidays over at my in-law’s house. It’s so easy to assemble and sets up in a manner of minutes. It transports in a convenient bag you can carry over your shoulder. I honestly think you could use this as a full-time bassinet if you wanted to.  I still love the halo bassinet because the baby is up and over the bed like they are right next to your face, whereas, with this bassinet, they would be next to the bed but lower. 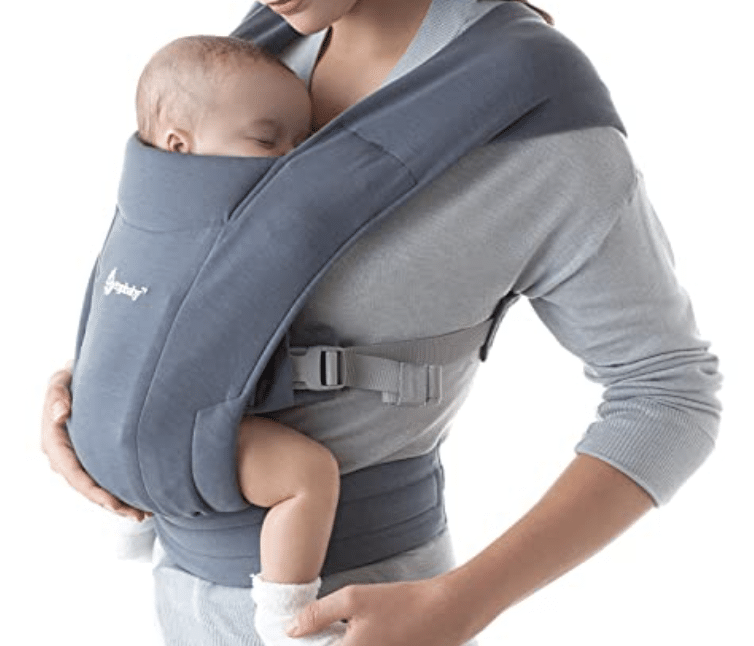 The ergo embrace carrier is the best mix between a baby carrier and a wrap I’ve run across. It has super soft, flexible material like a wrap, but it’s a carrier. I love our Ergo Baby 360 for older babies, but I always felt like it was too stiff for newborns but, I never had the patience to figure out a baby wrap. Even if I could figure out a wrap, I never really liked the feeling of it. It just never felt secure enough. The Ergobaby embrace carrier is secure yet flexible, the best of both worlds! 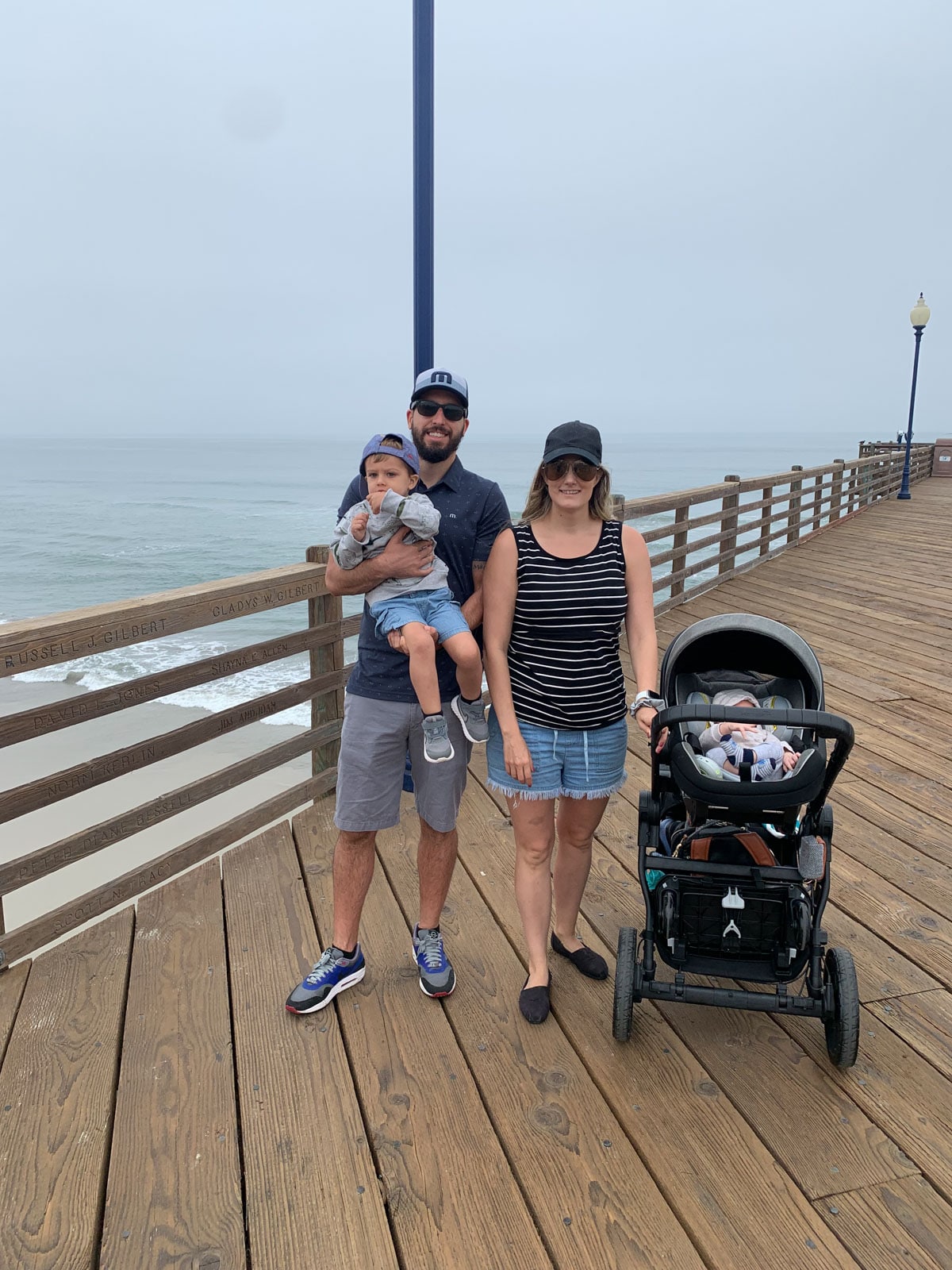 Okay, so this was a bigger purchase for baby #2. Our primary stroller was the BOB Revolution single stroller that we used the heck out of for KJ. I spent a long time deciding between the Uppa Baby Vista and the Baby Jogger City Select Luxe. Eventually, I chose the Baby Jogger because I had a friend that loved hers, and the car seat we had did not fit the Uppa Baby. This stroller is excellent for fitting through doorways and narrow walkways. We took it to California, and it takes up less room in the car than strollers with a side-by-side setup. The skateboard feature has been used a lot, especially as KJ teeters between wanting to ride and not riding in the stroller.

That being said, there are some things I don’t like about this stroller. 1) It’s hard to push – at first, I thought it was because I was out of shape, but nine months in, it’s still hard to push even without the attached car seat. 2) The harness straps are two pieces that you must attach and then put in the middle strap. Sometimes, they fall apart, and you have to restart. 3) My three-year-old barely fits in the seat. I mean, my nine-month-old fits perfectly right now. Because of these things, we may sell this stroller. 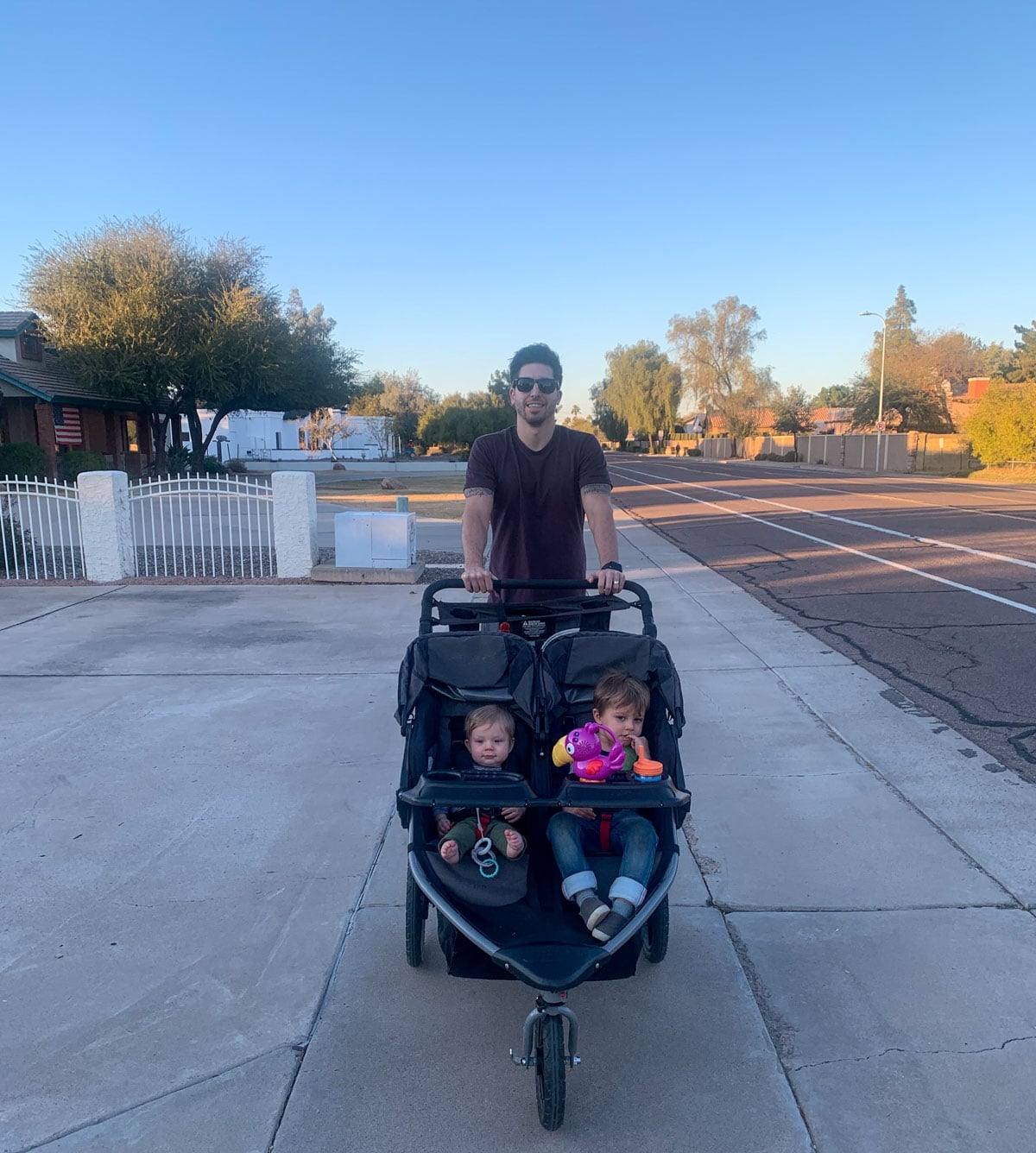 When I couldn’t stand the baby jogger anymore for walks around the neighborhood and the zoo, we purchased a BOB revolution flex duallie stroller on Offer Up. I got the tires replaced to stronger bike tires (just as I did with our BOB single), and it pushes so easily it basically floats across the sidewalk. While I can’t get through the doors at the preschool with this stroller, I take it on all family walks and to the zoo. I wish we would have bought this one new and the baby jogger used, but we got a good deal on a good condition stroller, so I’m still happy. 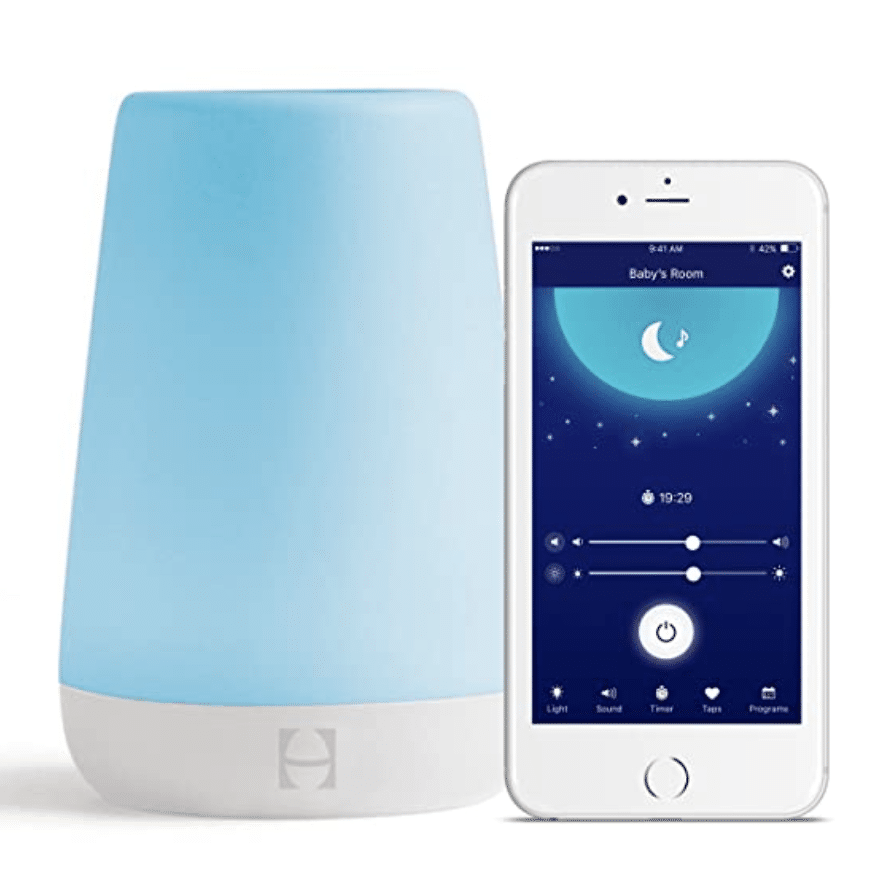 This Hatch + Sound Machine and Nightlight was a gift from a sweet friend for the baby, and we liked it so much we bought another one for KJ. So many reasons to love this sound machine. For starters, it’s louder than other sound machines. We keep it by the baby’s door to drown out toddler/preschooler tantrums and play while he naps during the day. It has a convenient night setting and a whole bunch of sound options. I used to nurse KK to the lullaby all the time, so much so that the song became a letdown trigger for me which was good because I have a slow letdown.

We started using the toddler light function six months before moving KJ to a toddler bed. We would use the app to turn the light green before we walked in every morning and after every nap. So, by the time we moved him to a toddler bed, he had no problem waiting until the light turned green to get out of bed. 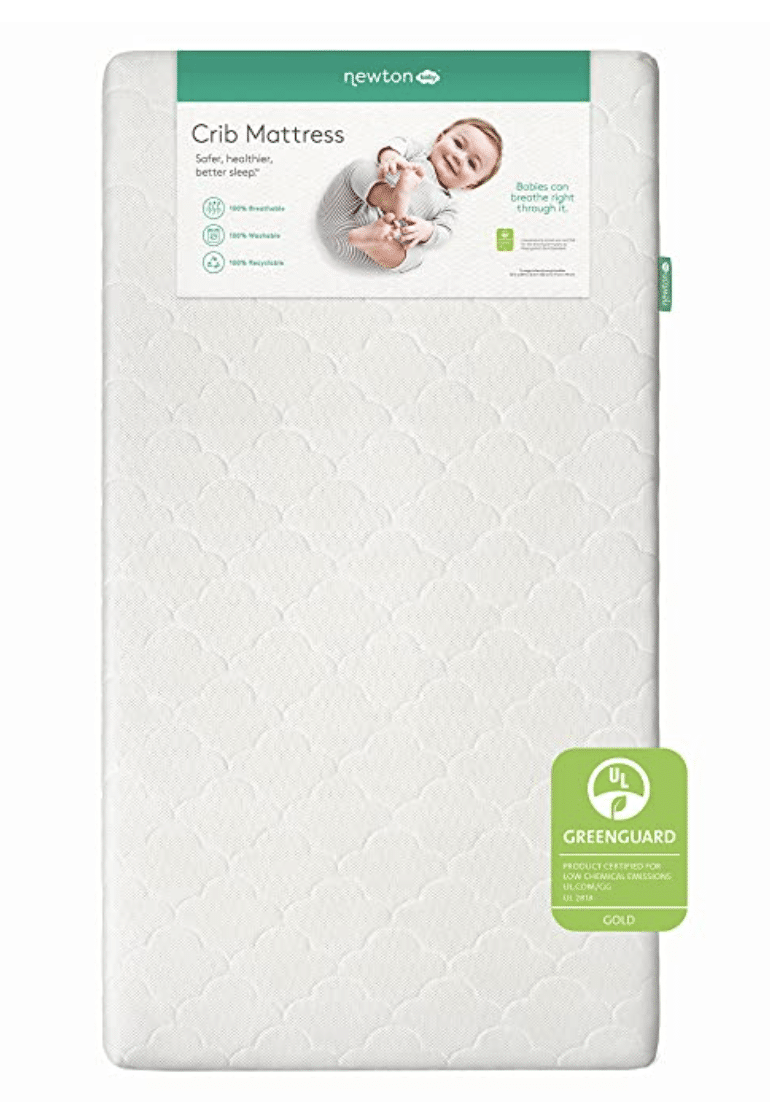 We used the newton baby mattress cover for KJ, so I knew I wanted a Newton Mattress for KK’s crib this time around. Newton is known for making breathable mattresses from nontoxic materials.  The entire thing is machine washable, which is SOOO nice. I got an extra cover because I’m terrible about remembering to finish the laundry. However, one of my friends with this mattress said she doesn’t have an extra cover and never needed it.  I’m guessing she’s better at remembering laundry than me. ha ha The mattress is breathable and comfy yet firm. 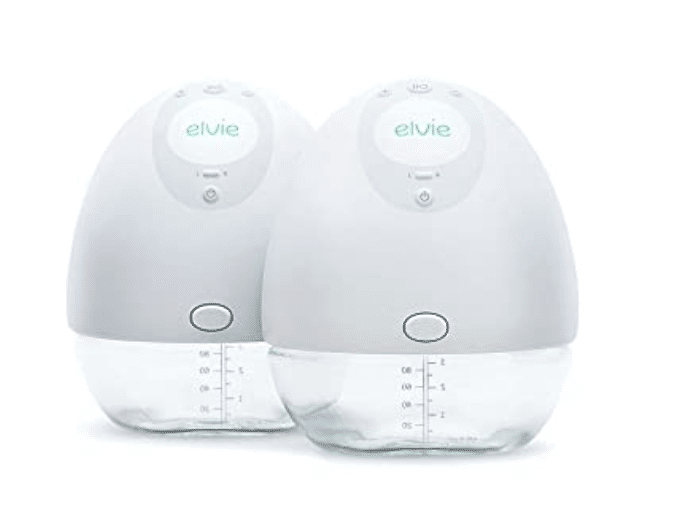 There is absolutely no way I would have been able to pump after every feed the first six weeks without my Elvies. With KJ, I struggled with milk supply (among other nursing-related challenges), so this time around, I was committed to pumping after every feed for the first 6-8 weeks to increase supply as much as possile. That goal would have been 100% unattainable without my Elvies.

They were pretty comfortable and, in the early days, got about the same amount of milk as my double electric pump. I notice now that I rarely pump. When I do pump, the double electric pump produces better output. I think this is due to my body not being used to pumping because I got the same amount in the early days, no matter what. (I have never been the person to get a ton of milk anyways.) And it’s worth noting that when the Elvies started making a weird noise, their customer support replaced them with little fuss. My friend who has the Willow said that they wouldn’t replace hers when she started having a problem with the battery just a month after purchasing. 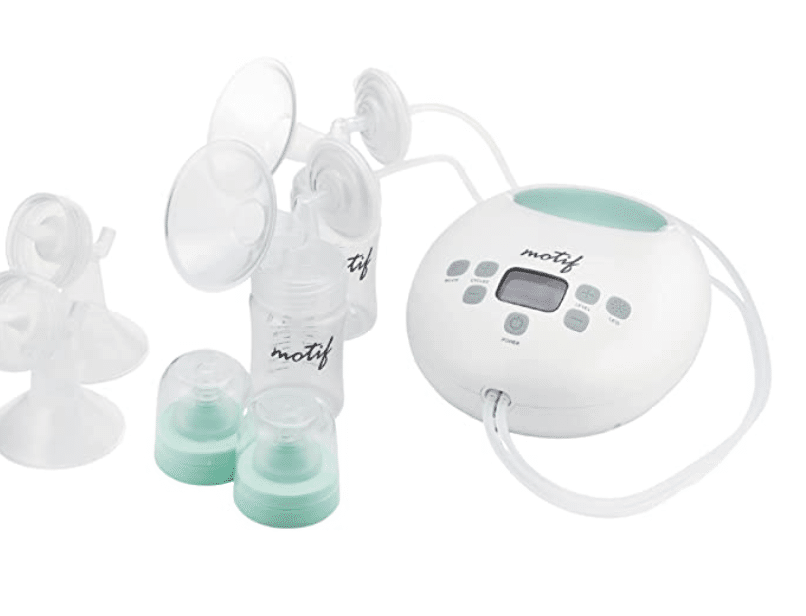 I got this Motif Luna Duo through my insurance as recommended through Aeroflow. Aeroflow recommended this pump because it has the same strength suction as a hospital-grade pump. It could have been that my milk supply was just better this time around, but I got more milk with this pump than I did with my hospital-grade pump I rented with KJ.  It’s not too loud and relatively simple to use.  The downside is replacement parts aren’t as available as they are with big-name brands.  I was able to find some third-party parts recommended to me by a lactation consultant for smaller flanges.

If you haven’t already, check out my full review on the Beaba Babycook Neo here! 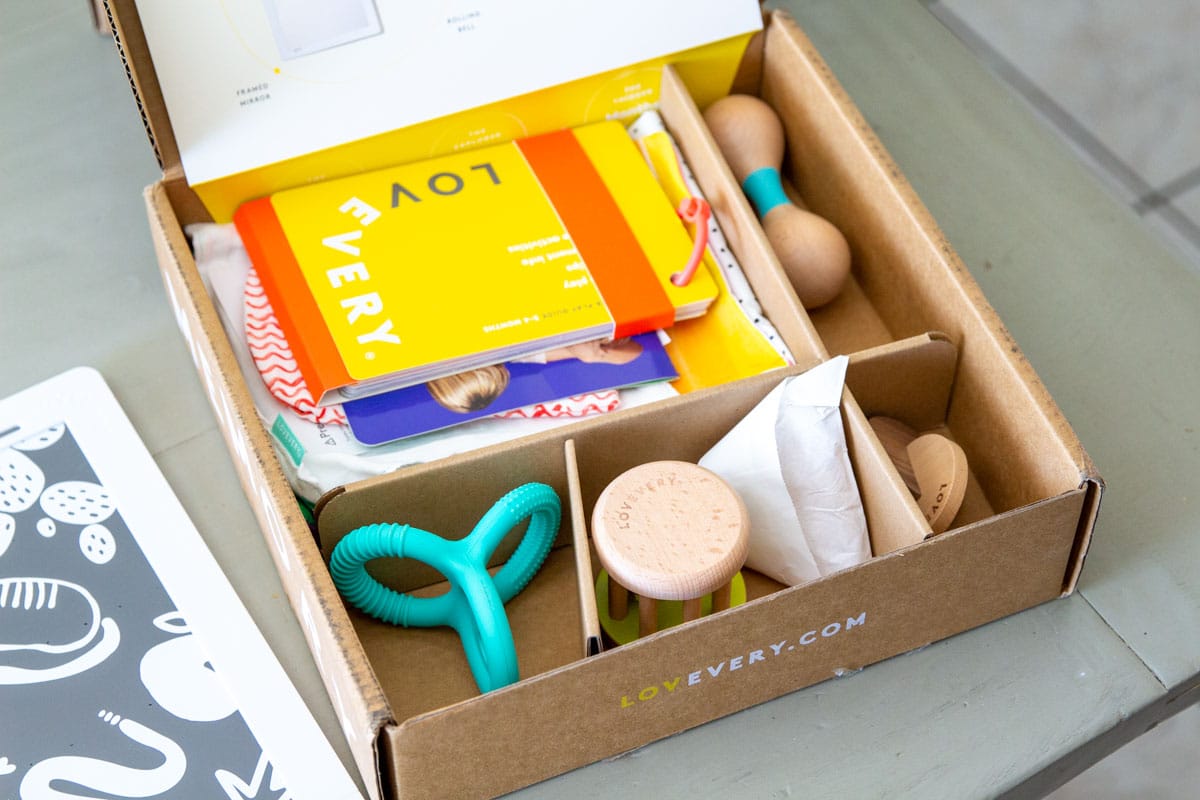 We started the Lovevery subscription when KJ was 18 months old, so we are filling in the 0-18-month-old gap for KK. I skipped the 0-3 month box and started his subscription at three months old, so he has received three boxes so far. The Lovevery toys are as beautiful as they are engaging for him! We also got the Montessori Toy Shelf and Storage Bin during this time, and some of KK’s toys stay there. KJ loves to run and get toys off the shelf for his baby brother (to avoid letting him play with his toys, haha.)

That’s it! Those are the things I used as a second-time mom that I didn’t use the first time!!! Hope it helps all you Mama’s out there decide what’s worth it and what’s not.