Hi friends!  I meant to post this recap over the weekend, but there are just never enough hours in the day nowadays.  I’m sure that surprises all of you given that today KJ is exactly one month old.  My goal is to get his 4-week update posted tonight, but ya know, no promises on that!

Before we get to today’s post, don’t forget today is the last day to score your fit-bundle!  I only have a few spots left so get on it, people!

So this post is going to be short, but I wanted to pop in and share with you guys are Thanksgiving experience, because it was a little different than normal.  Usually, we cook, we cook a ton of Hungry Hobby recipes starting the night before and well into the next day.  This year, however, we had fewer people coming (just four adults and one baby), and I couldn’t fathom doing all that cooking. 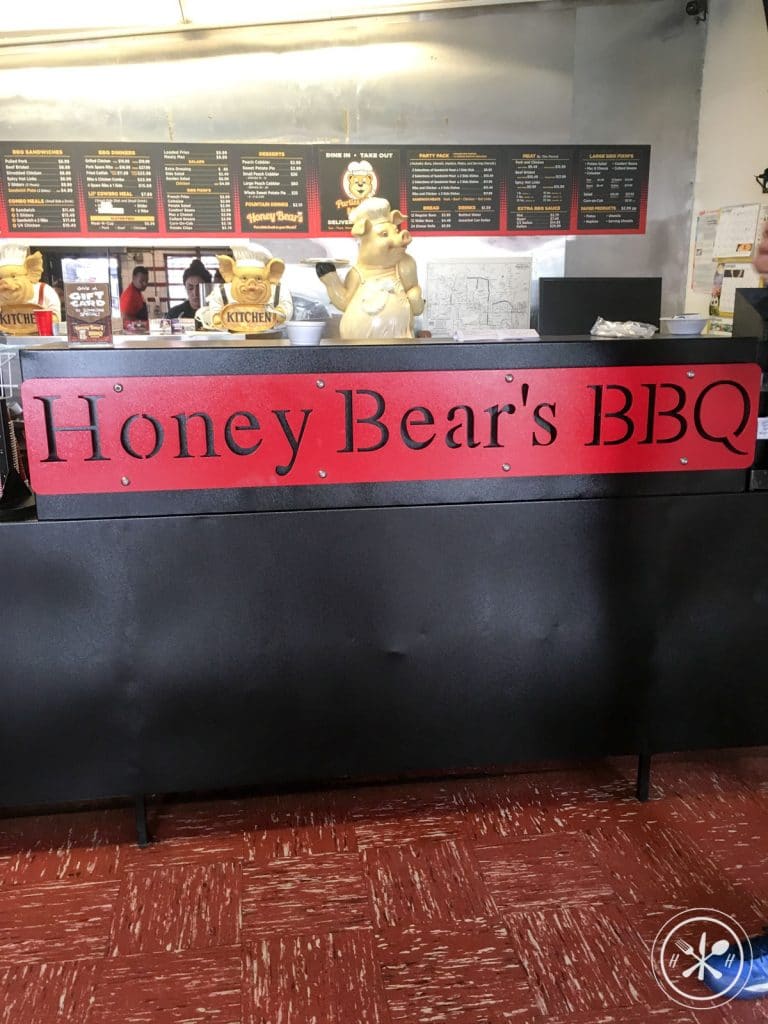 So, my mom suggested we order our feast from Honey Bears BBQ which does smoked turkey meals! Honey Bears is pretty famous in Arizona and has been around a long time, plus their meal options were super affordable.  My mom snapped a few pictures when she picked up the food. (They had two time slots available for pick up, 9 am, and 11 am). 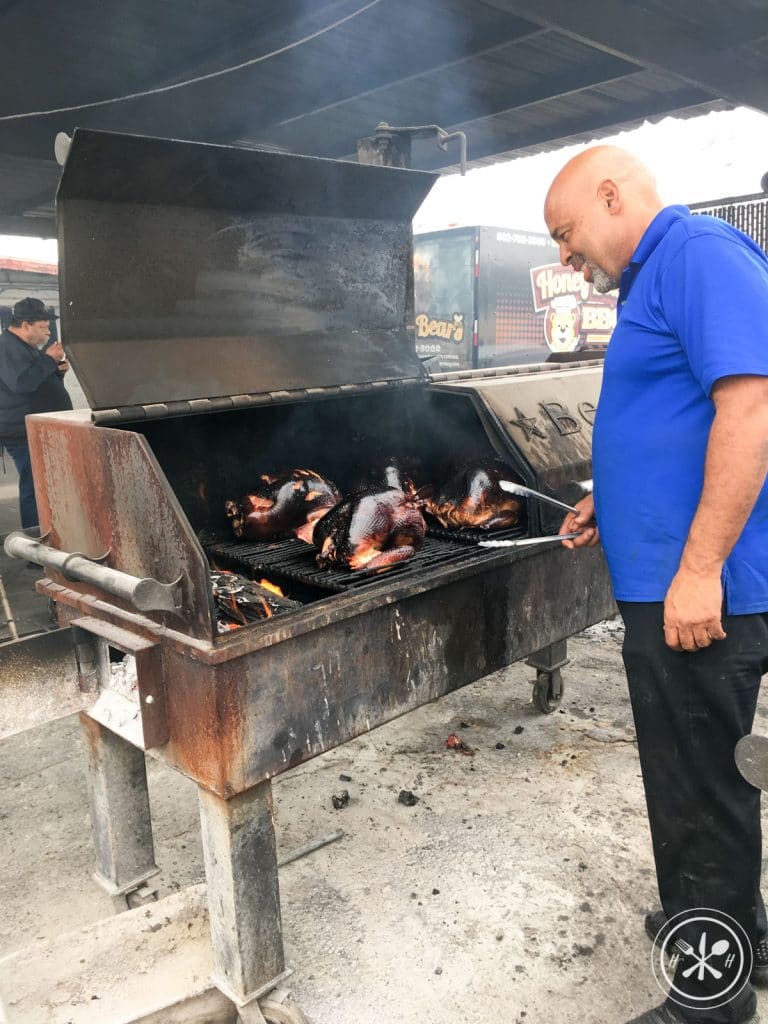 The meal was served ready to go, all we had to do was stick the turkey in the oven for 15 minutes at 330F.  Then we all dug in!  Well actually, I nursed KJ first while Mr. Hungry and his Grandma dug in.  Then when KJ was done nursing, I popped open my first beer in 10 months and dug into the feast with my mom.  You eat in shifts when you have a newborn in the house! 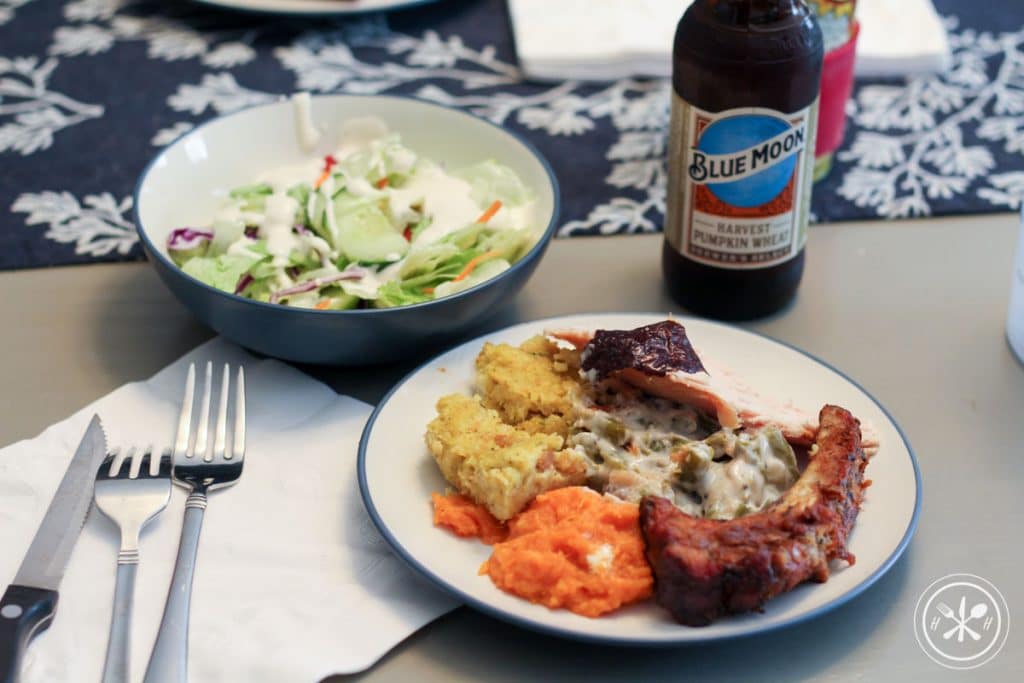 It was my first drink, so I was a little nervous about the whole alcohol breastfeeding thing.  So KJ also got his first bottle while I waited the full 2 hours after finishing half my beer before nursing again. 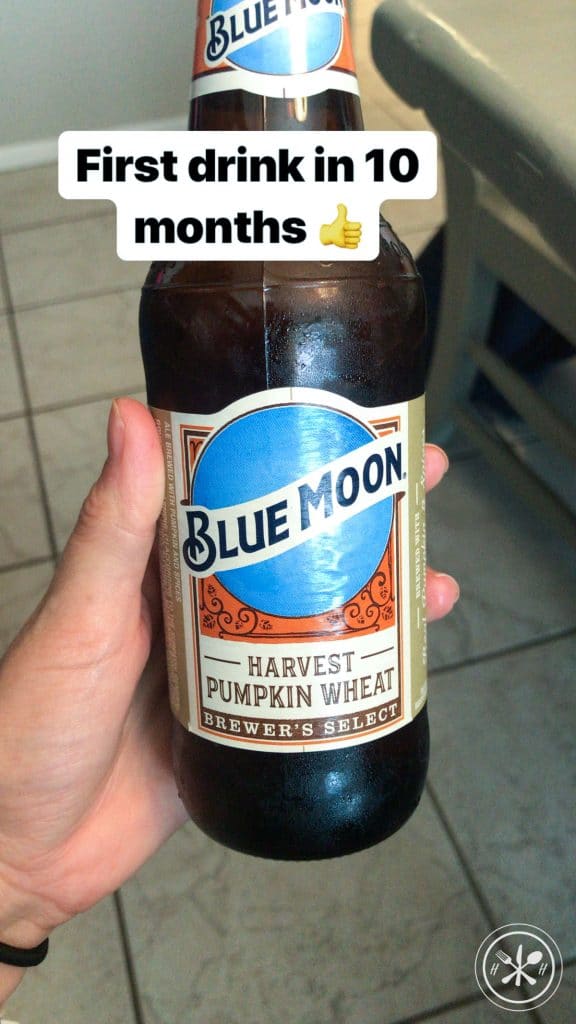 I made up a sign that said “My First Thanksgiving” and never took a picture of him with it.  I never took any pictures of anyone except for the food.  KJ has decided daytime naps are not his thing.  It’s funny for the first four weeks he slept during the day and not at night.  Now he sleeps during the night and not at all during the day.

Mr. Hungry’s Grandma (who had five children) commented on how your first baby shouldn’t be a hard baby, but also, “this too shall pass.”  More updates on sleep and newborn life soon I promise!

As far as Thanksgiving goes, I loved Honey Bears including the convenience, the price, and the delicious home cooked food.  However, I was surprised how much I missed my cooking and recipes, especially considering Thanksgiving food isn’t my favorite, I’m all about the leftovers made into enchiladas.

I think because I spent four years developing those recipes while hosting Thanksgiving at our house I am more attached to them than I thought. Ordering in our meal was the right choice though, there is no way I would have been able to cook and give KJ even half the attention he needs right now, so we were thankful for Honey Bear’s providing a stress-free delicious meal! (not sponsored just thought I would share the experience!)

How was your Thanksgiving?

Did you order food or make food?