Guess what?!?!?!?! Our kitchen remodel ends this week!  I’m. So. Excited.  We’ve been without kitchen counters or a sink for over three weeks.

My anxiety levels have been on the rise, and I’m not sure if it’s the kitchen remodel, hormonal do to weaning, or just approaching the end of the year.  Probably a combination of all three.  The remodel doesn’t help things that’s for sure, I know I’ll feel a TON better when we have kitchen counters.

I’ll be sharing more about our little mini kitchen upgrade (no more galley kitchen!)  But in the meantime, I’d thought I’d share a DIL style post since I haven’t done one in a while.  It’s basically the day of all the FNCE snacks.  No kitchen = no cooking = subsisting off of ready-made Trader Joe’s Food & FNCE snacks.

For instance, breakfast was a Simple Mills banana bread (affiliate link) with collagen (affiliate link)& half and half in my coffee.  (I wrote about why I use collagen in this post if you are curious!)

Mondays are long days.  I leave at 6:30 AM so that I can get to the classroom and set up, grade papers, etc.  By the end of class, 9:45 AM, I’m really hungry.  I have just a few minutes to eat before I have to head over to the lab, which is in a building a couple of blocks away.

So, on the way, I had an 88 acres sunflower seed butter pack (affiliate link)and a banana. 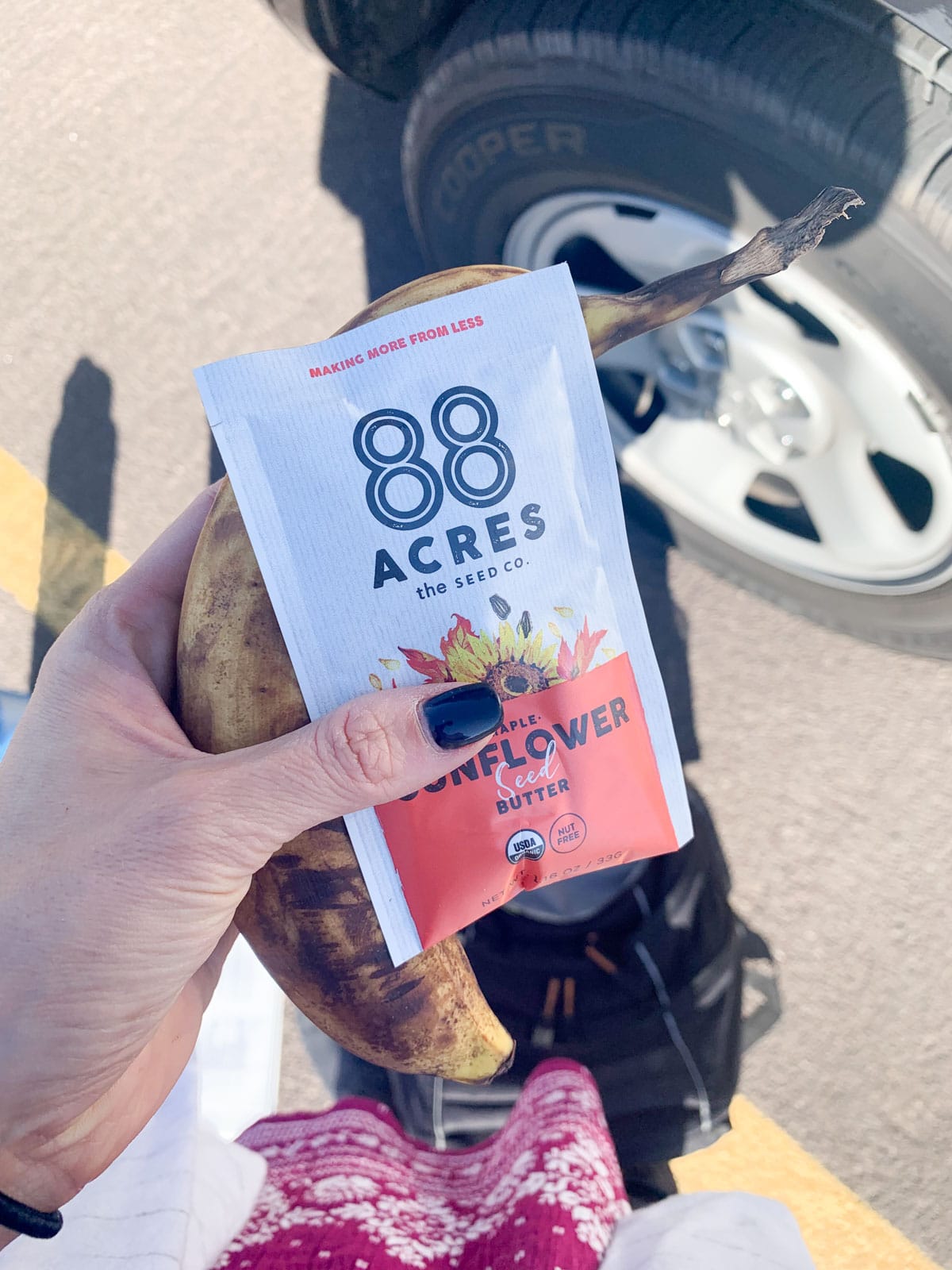 I also drank an Orgain plant-based pre-made protein shake from Costco (I learned from the Orgain folks at FNCE at Costco that the plant-based shakes found there are ONLY found at Costco, the closest alternative product is these ones.) (affiliate link)

The lab is 3 hours, so I got done around 1 pm.  Our topic was blood lipids so the students came fasted and actually checked their own blood lipids!  I didn’t take a new photo, but here is one of the set up from years past. 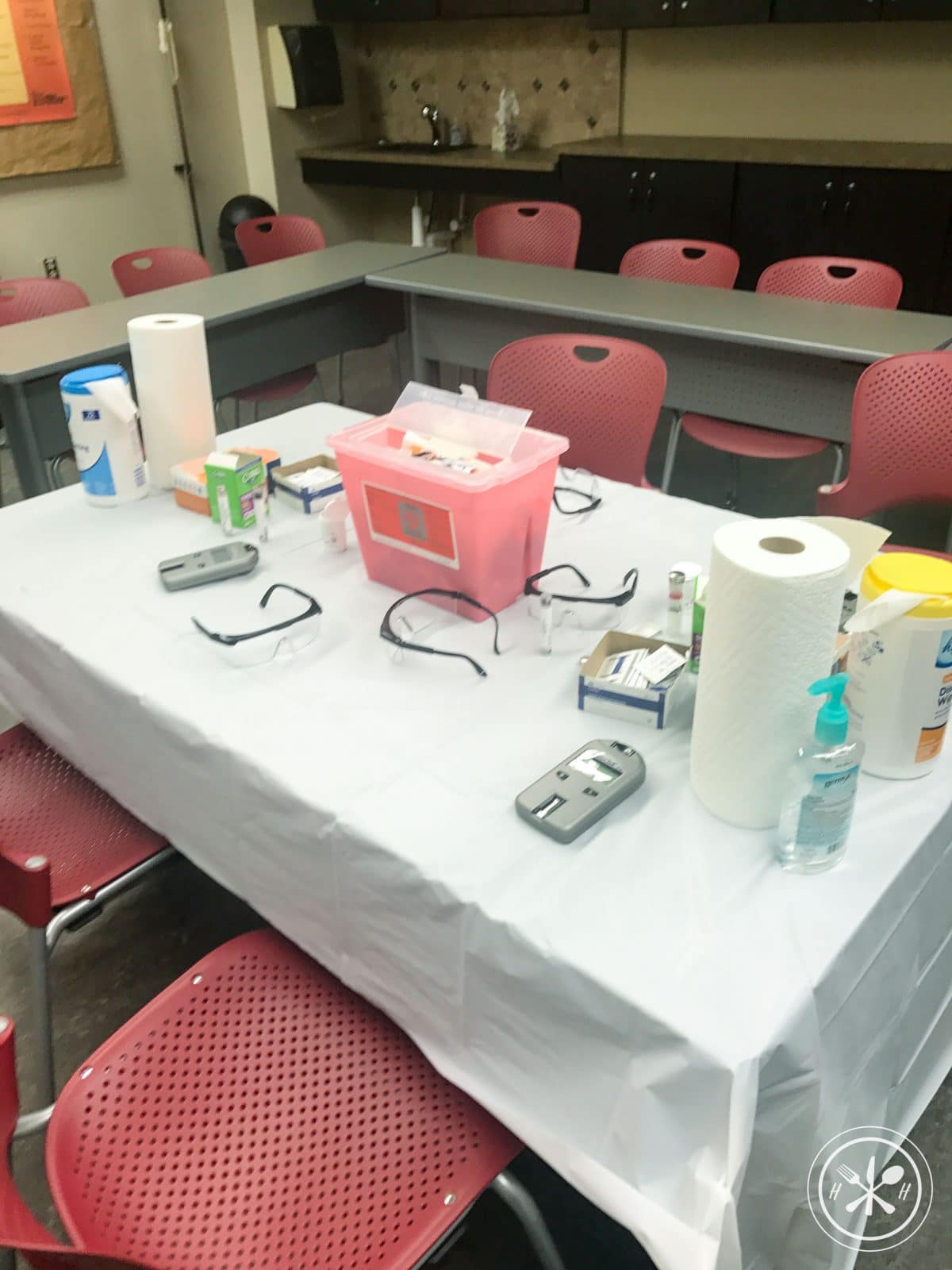 I listened to This Is Your Brain on Birth Control (affiliate link)on audible on the way home.  So far, the beginning was boring, but now it’s really interesting! (FYI – the Author does a great job of not pushing any agenda for or against birth control.  She is a psychologist and presents the information from an evolutionary biologist standpoint, and it’s fascinating!)

When I got home, I was starving, so I said a quick hello to Little Man then made a salad.  “Made a salad” is a strong description.  I got the pepitas tahini salad kit from TJ’s along with their “just chicken” strips.  So by “made a salad,” I mean that I reheated the chicken and added it to the salad kid ingredients. 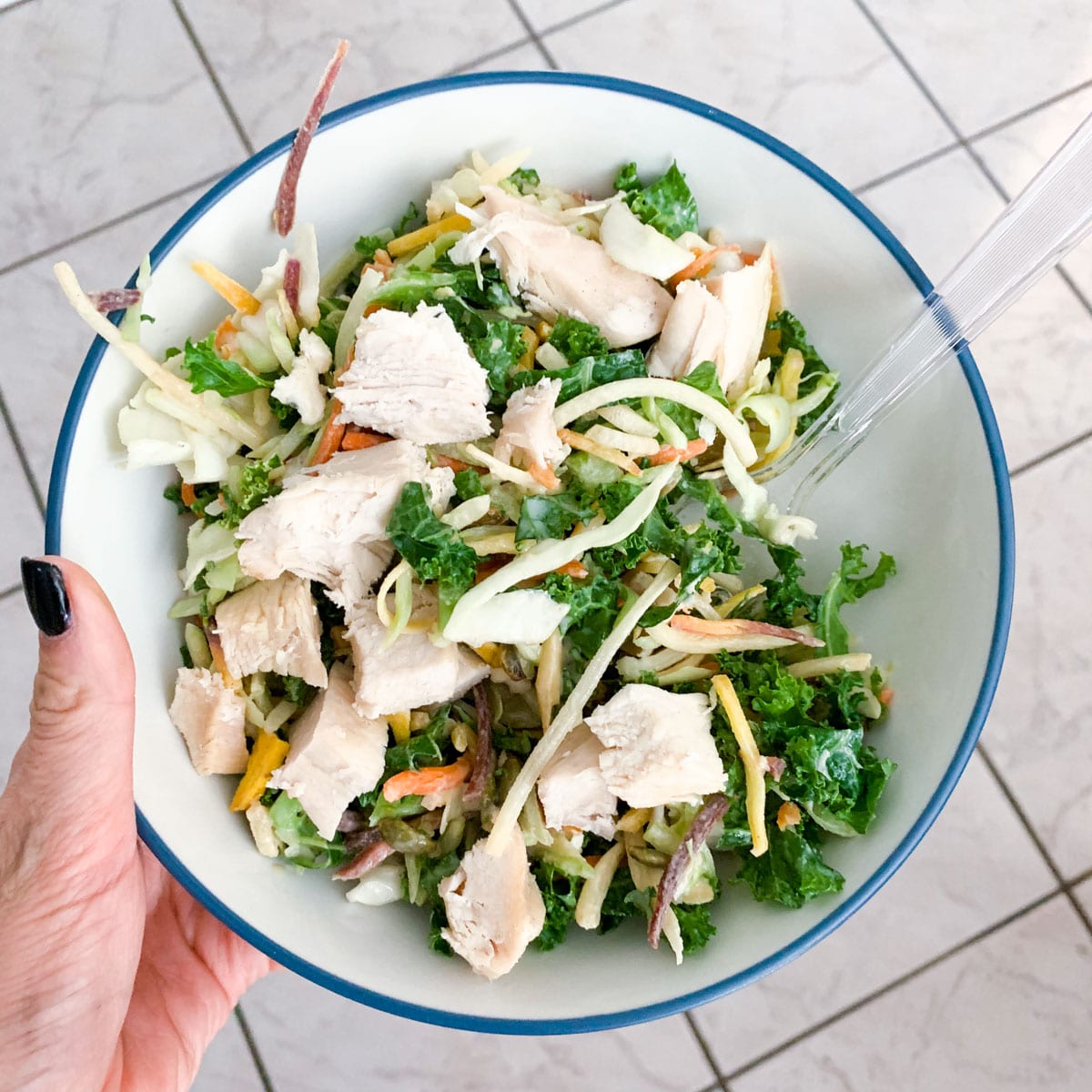 I got a little bit of work done while Little Man naped.  He took a really good nap. He slept for over 2 hours!  His naps have been all over the place lately.  They are either really long or short, or it takes him forever to fall asleep, or he skips it altogether.

I think maybe he is ready for the 2 to 1 nap transition.  Initially, I thought that he might not be ready, but now I think he might be.  Who knows!?! When did you transition your little one down to only one nap.?

Anyways, when he woke up, I gave him a squeeze pack for a snack, and we headed out to the park to play for a while! Since he slept so late for his second nap, Mr. Hungry was even able to join us at the park! 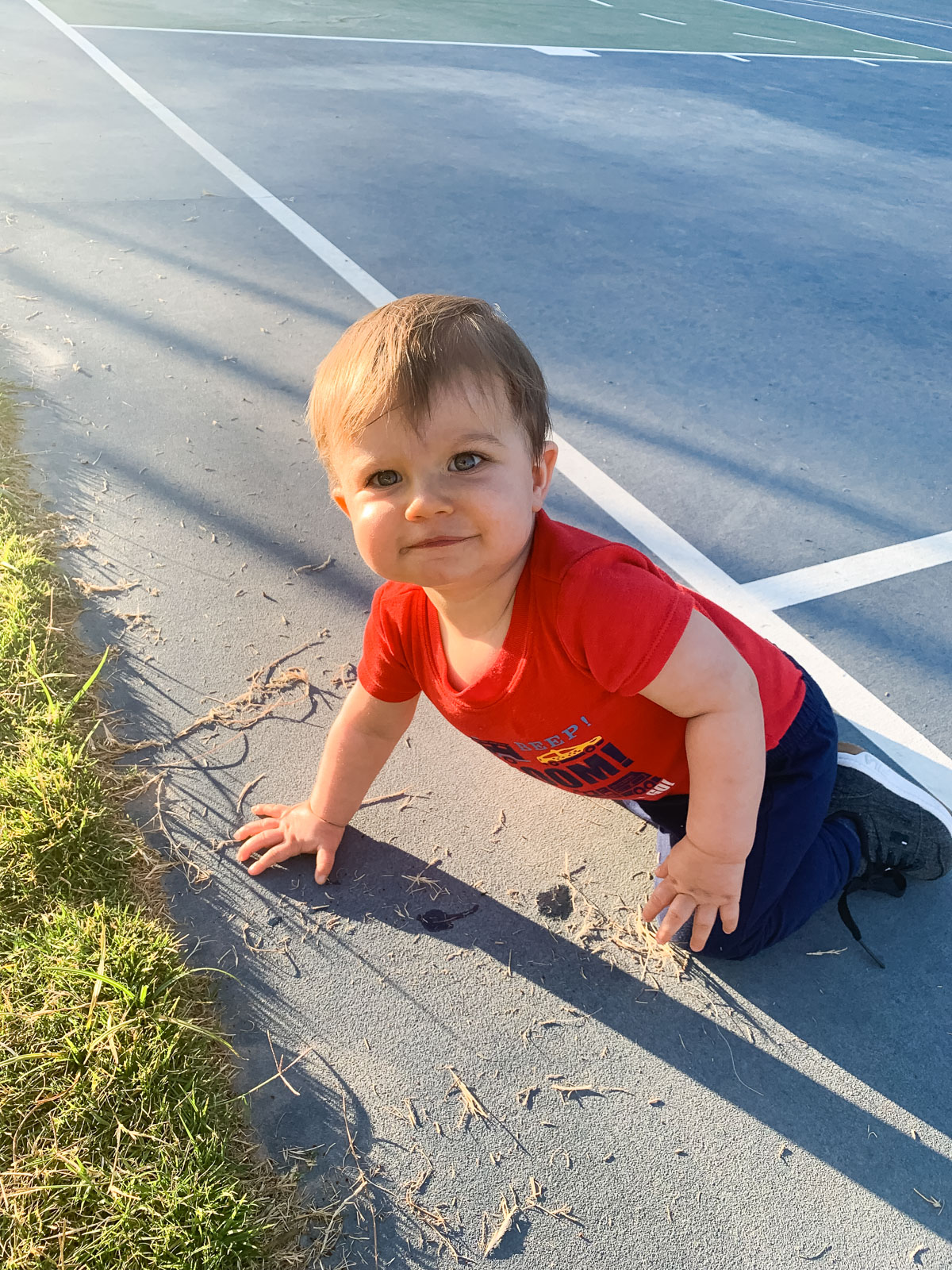 There is one park near our house that has NO SAND!  Thanks to my friend Rachel for tipping me off about that.  It also has a ton of hay, not sure why. Baby K loves to play in it, though!

His favorite “park” activities are walking around or swinging. 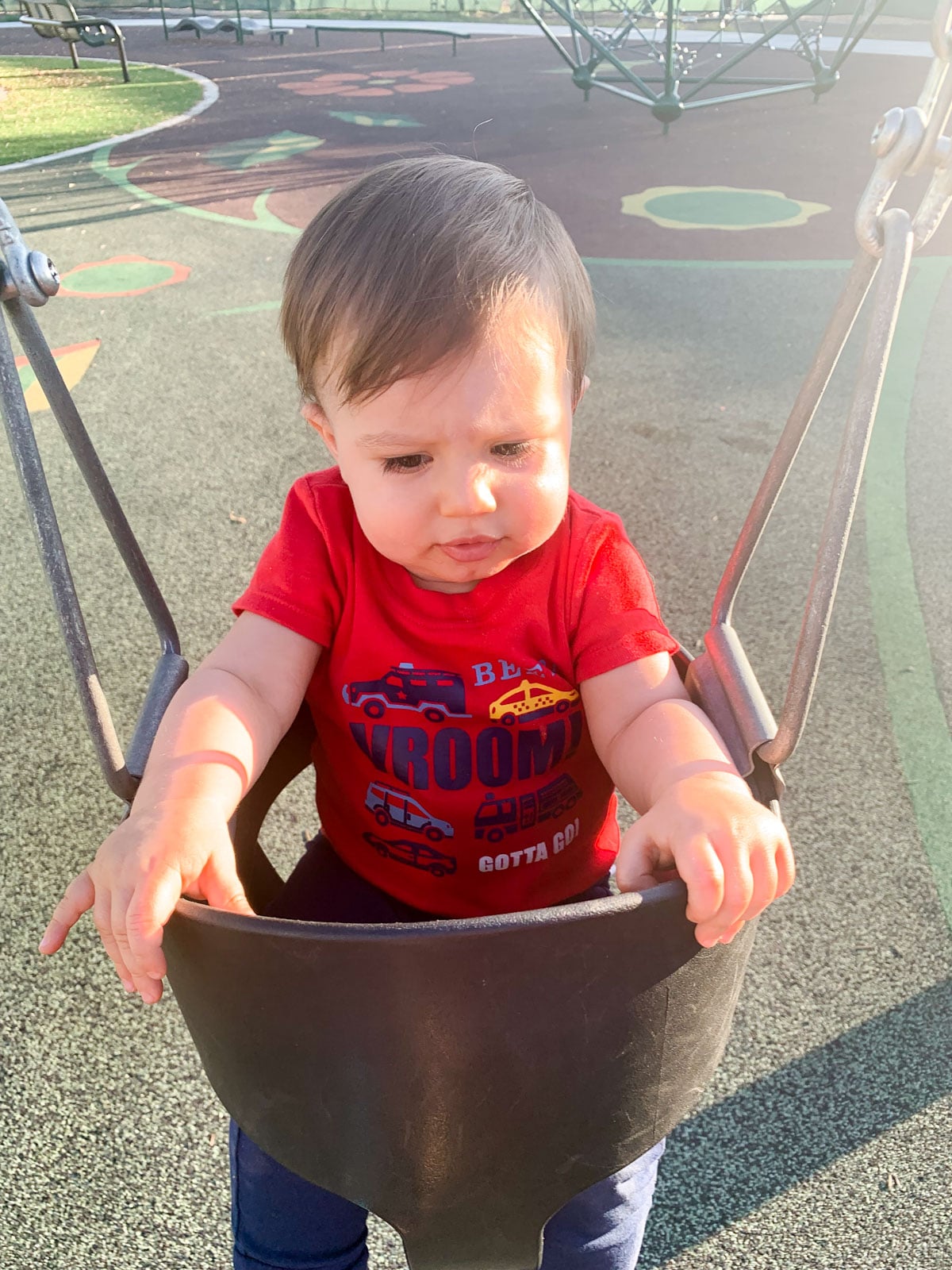 At some point, I ate this moon cheese (affiliate link), which was delicious! It was the perfect savory and salty snack that was also filling! 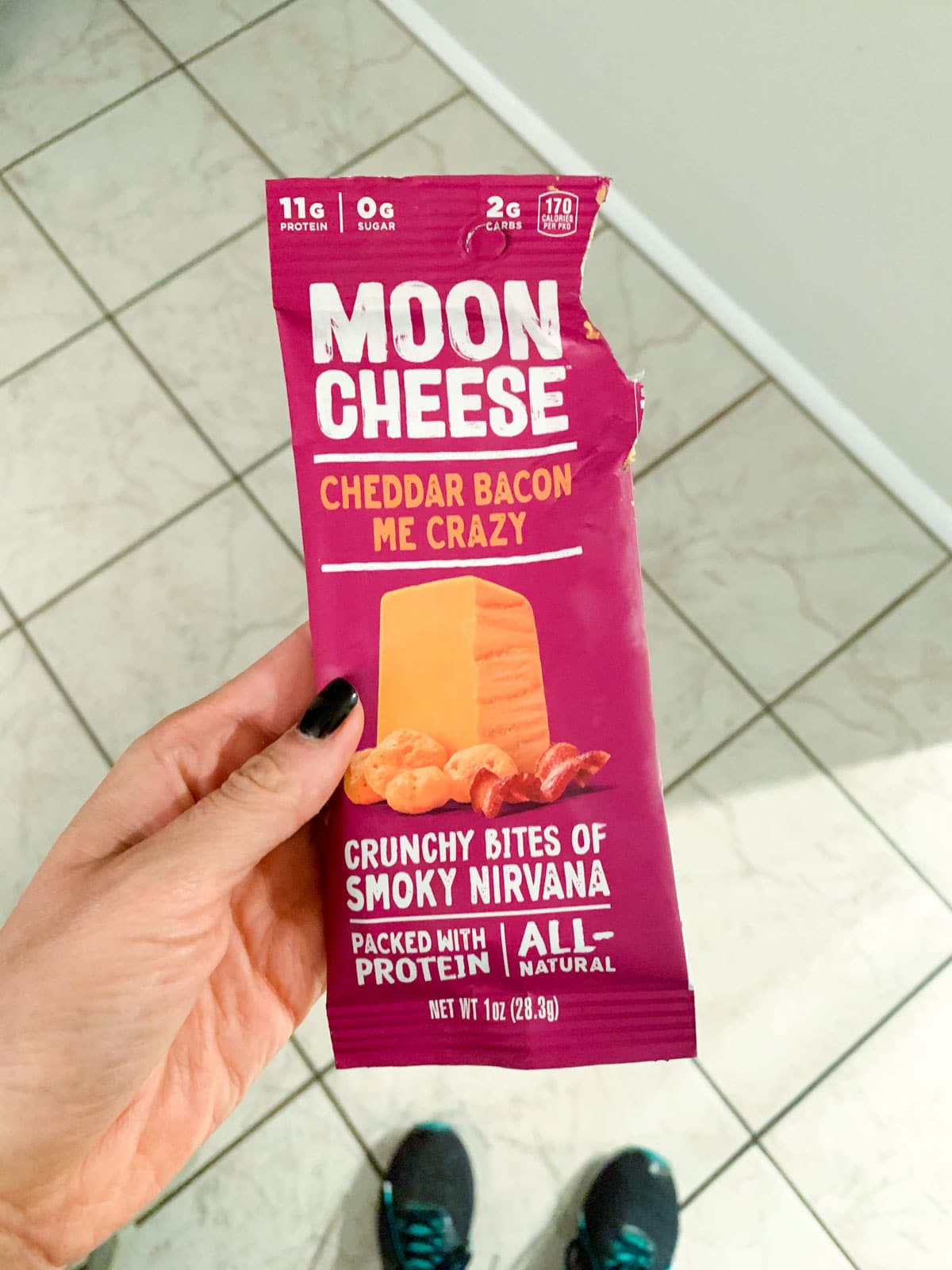 The rest of the night was a balancing act of eating dinner and getting Baby K to bed.  We are used to him going to bed super early and then eating after, so having him still wide awake and not too cranky at 7:30 pm was an adjustment!  For dinner, we had Trader Joe’s Meat Lasagna and steam in the bag broccoli.  Easy, but no photo because nighttime lighting is the WORST.

I also ate two almond joy pieces, damn leftover Halloween candy! That’s it!  The next day started with a super early morning work out that I did not want to do, but of course, felt amazing after it was done.  I can’t believe I used to get up at 4 AM willing to work out. I’m such a baby about AM workouts now! 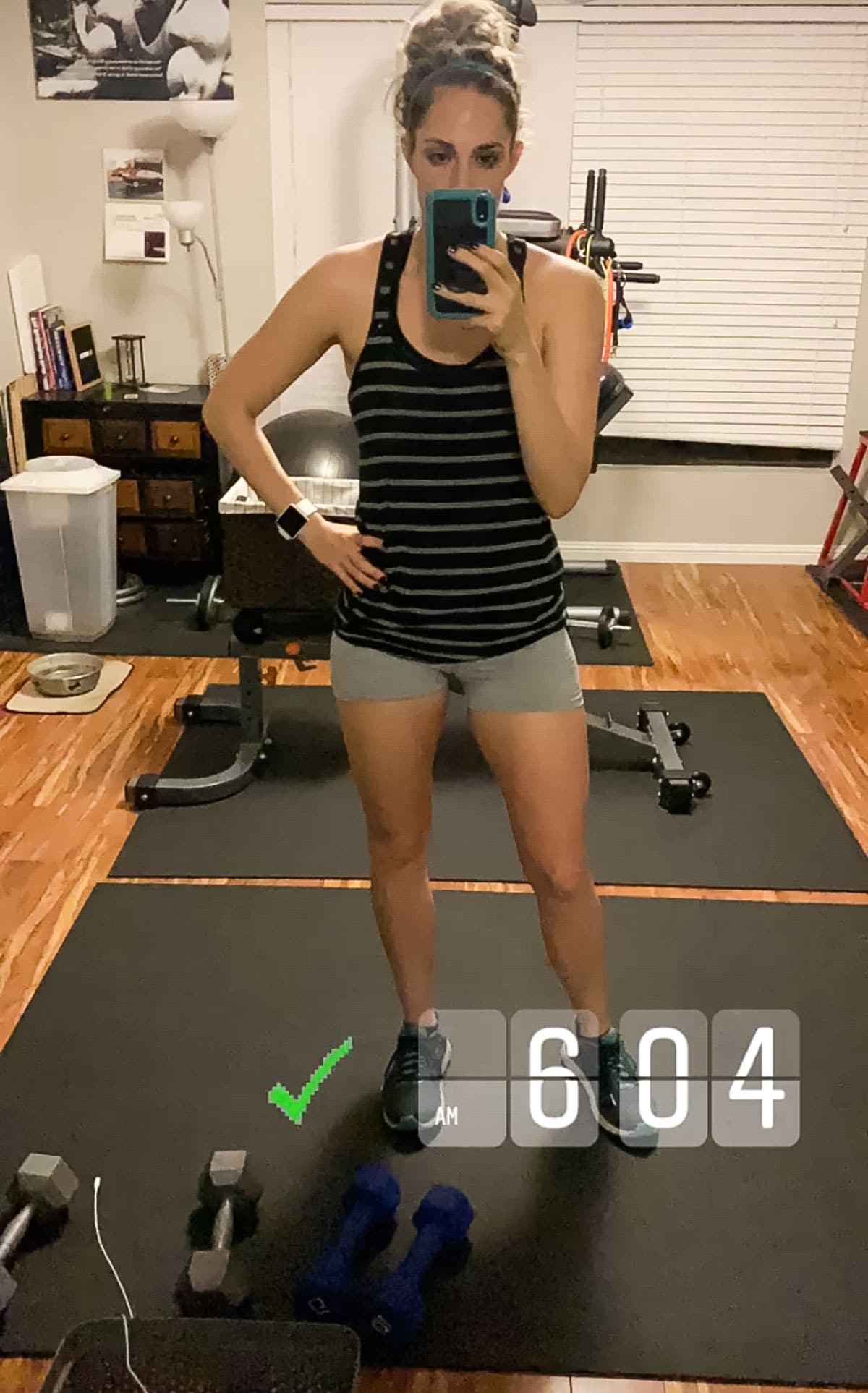