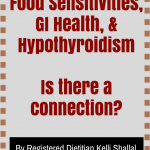 I was initially going to make this post about autoimmune conditions but decided to narrow it down to looking at the validity of food sensitivity testing and the thyroid.

If you haven’t read these articles I wrote, make sure you read them before reading this post! 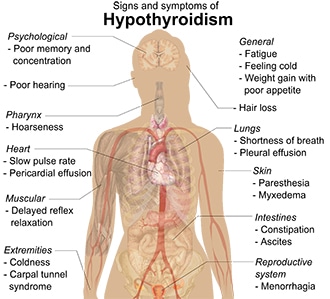 Hashimoto’s is a type of hypothyroidism that is different from some other thyroid conditions because it’s autoimmune in nature.  An autoimmune disease means that the person’s immune system is attacking itself, damaging specific tissues, in this case, the thyroid.  Usually, thyroid antibodies (TPO) are increased, which support the idea the body is making antibodies (immune system markers) toward itself.  Damage to the thyroid causes it to stop producing enough thyroid hormones, or the body is unable to convert inactive thyroid hormone to active thyroid hormone.

What is Sub-clinical Thyroid Dysfunction

This same problem occurs in those who do not have Hashimoto’s but do have a suboptimal functioning thyroid.  In those cases, the thyroid functions suboptimally for some other reason.   For instance, women (and men) on a very low carb diet are susceptible to low active thyroid hormone levels.  (Why Your Hormones Need Carbs) Suboptimal function usually means that the patient has numbers in the medically accepted range, but is on the border (high or low) of the allowed range and is symptomatic.  For instance, you feel tired and lethargic because your active thyroid hormone is low.  However, it’s not low enough to diagnose you with anything specific or treat you medically.

How Does Hashimoto’s Develop?

Notice that nowhere on that list does it say food sensitivities cause or are related to Hashimoto’s, we will get to how that possibly relates. 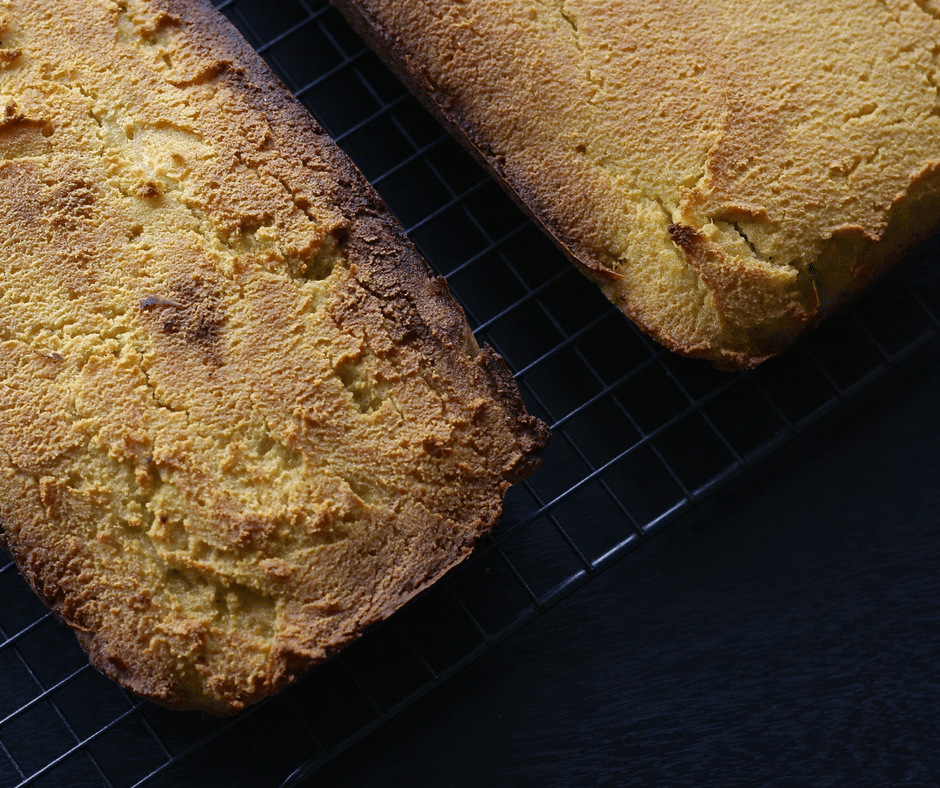 There were a few studies whose results have been grossly misquoted and misused.  These studies showed that thyroid antibodies and other markers normalized after patients followed a one-year gluten-free diet.  However, what most sites are promoting is a gluten-free diet, and they won’t tell you is that these patients were confirmed, celiac patients.  Celiac disease is a disease in which the body attacks the intestinal wall after being exposed to gluten. However, it is one that seems to be CLOSELY related to Hashimoto’s.  There is considered to be an increased amount of sub-clinical celiac disease in patients with hypothyroidism.  (2)

So what came first?  The chicken or the egg?  Celiac disease or the hypothyroidism?  The gluten-free diet is likely most effective at normalizing thyroid levels in those individuals in which celiac disease, diagnosed or sub-clinical (meaning they have no symptoms) is present. However, more research is needed to confirm the real relationship between a gluten-free diet and Hashimotos or subclinical hypothyroidism.

I’ve talked about this several times in many other posts regarding food sensitivities, so I’ll be a bit briefer here.

Leaky gut is the term used to describe intestinal permeability, meaning more than what should get through the spaces in between the cells that line the GI tract can get through.  In other words, the GI tract is more “permeable” than it should be.

The current theory is that the body has lost “oral tolerance”  and the immune system is experiencing an exaggerated response to usually benign foods.  Why this happens, we aren’t sure. Regardless the body produces inflammatory cell mediators such as histamines, prostaglandins, leukotrienes, cytokines, and others.

These mediators damage tissue causing a lack of intestinal permeability (Leaky Gut) and sometimes leading to “global symptoms” aka symptoms not directly associated with the gut like a headache, fatigue, or the symptoms associated with autoimmune conditions. It’s a stressor on the body, and every person responds differently. If you can identify these triggers (food sensitivities) and remove them, then you can give the immune system time to calm down and the body time to heal the gut.  Similar to if you have a muscular injury, stop using it, or aggravating it, so it’s more likely to recover right? Same deal.  Once it heals, you can often go back to eating many of the foods that were once a trigger (but not all of them.) 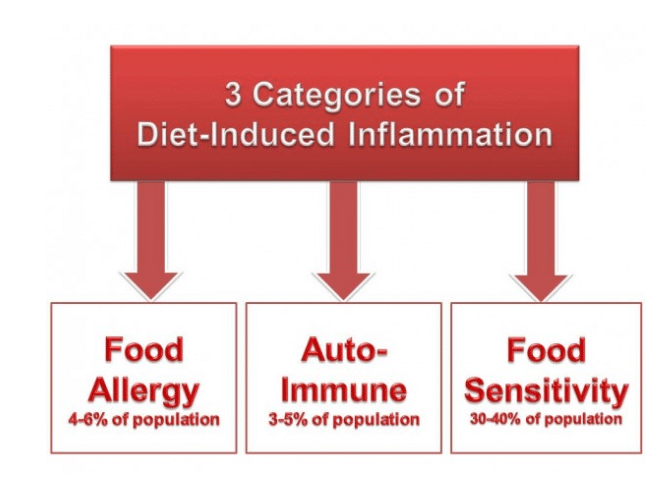 I do not believe food sensitivities on their own are enough to cause hypothyroidism or Hashimoto’s.  However, I do think they could be stressing the body enough that they contributed to the development or prevent total remission.

Blind food elimination is not a strategy I ever recommend because I have NEVER found someone who only reacts to one or two food groups.  That being said, I acknowledge the potential healing powers of a gluten and dairy free diet on the thyroid. Given the small amount of research to support this dietary method, I will assist a client trying this for 3-6 months.  BUT ONLY AFTER they’ve ruled out celiac disease to the best of their ability (aka whatever tests their doctor was willing to run, and I keep in the back of my mind these tests aren’t that reliable.) Sometimes that’s enough, the client feels better, they are happy, and so I am so glad for them.

If thyroid levels don’t normalize and subclinical thyroid symptoms don’t reverse, I recommend a food sensitivity test with leap protocol, which would be my preferred route to go in the first place.  If food sensitivities are contributing to leaky gut, causing stress on the body via inflammation, it’s likely to be a unique subset of foods causing the issue.  I believe these foods to be individualized to the person, have common themes (food families) and are more than just the typically accepted “inflammatory foods.”

I have a close friend who lost 80 pounds and about two years later was going through significant life stress when her world kind of started to crumble.  At the time she had all the classic symptoms of celiac disease: eating 3,000 calories a day + and losing weight, loss of menses, and stress fractures/osteopenia.  She was at some point tested for celiac, but with only one intestinal biopsy.  Research shows that 4 or more biopsies are required to catch 100% of actual celiac patients.  She eventually saw a holistic doctor who diagnosed her with Hashimotos and put her on a gluten-free diet.  Her thyroid antibodies dropped significantly, but remain higher than normal.  Since she has been following a GF diet for the last three years and notices symptoms when reintroducing gluten, she will never know if she has celiac.  That’s why it’s so important to get tested for celiac before going gluten-free.  This friend is exceptionally healthy and runs a healthy living blog, so we know her antibodies aren’t remaining high because of a lifestyle choice.  So could healthy foods be causing the issue?  Something other than gluten? Yes, and if her antibodies remain high, I would suggest food sensitivity testing to help target generalized inflammation and the potential for leaky gut. 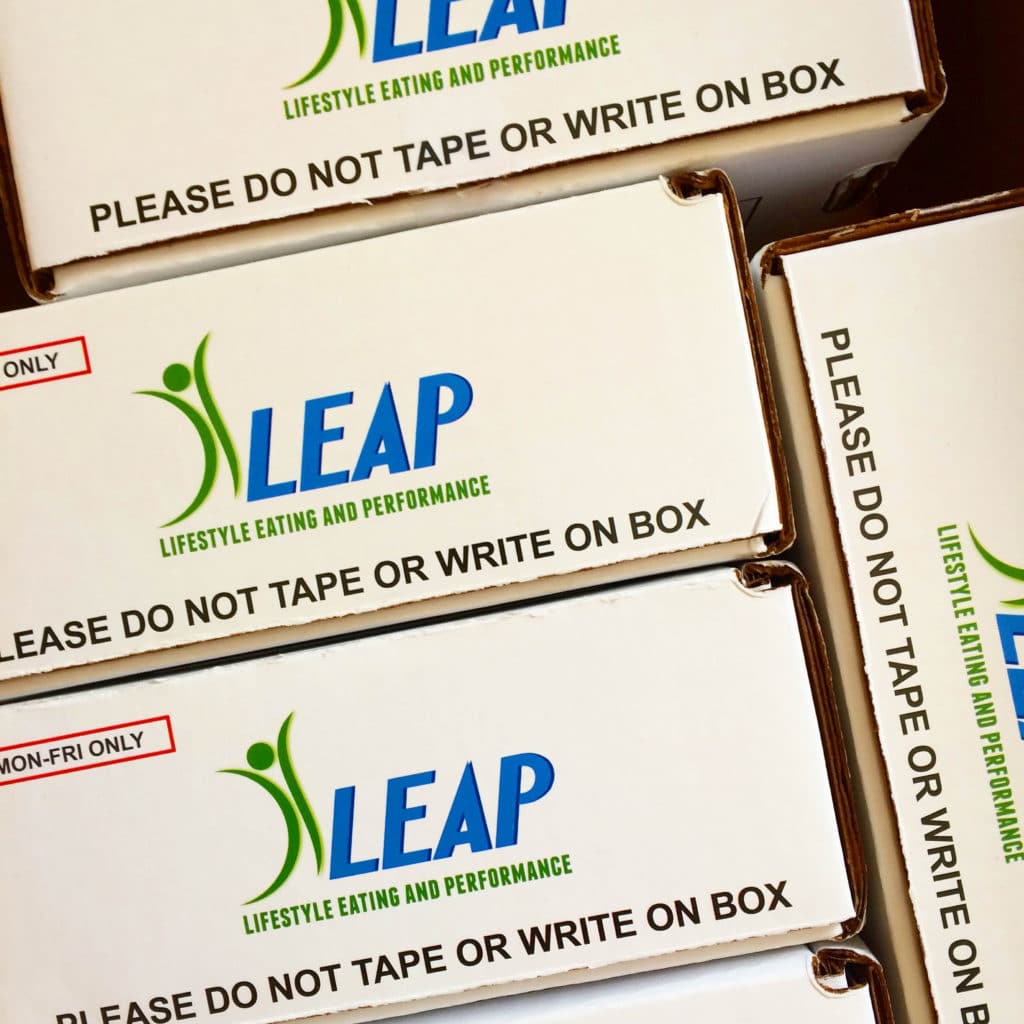 When to consider food sensitivity testing:

(In fact, I had one client that went through the entire protocol after her second child to avoid the “thyroid meltdown” she had with her first child.  It’s hard to say whether she would have had the same “meltdown” or not, but I supported her because she strongly felt that food sensitivity testing was what reversed her condition the first time.)

I take all my clients through the consultation & screening process, which helps rule out other things you can try before testing.  It also makes sure you are a good candidate for the test.  You can schedule your consultation here.  The fee is 25 dollars, which will be applied to the test package or nutrition counseling package should we decide you are a good candidate and will benefit from it.

Hopefully, this helps!  Feel free to ask questions in the comments or email me at [email protected]