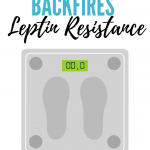 As human beings we are hard-wired to seek please and avoid pain, it’s an innate physiological response that we can sometimes push past.  For example, when we attempt to “diet” we seek pain and avoid pleasure.  When we fail, we blame our own willpower and a lack of strength, dismissing the hard-wired biological responses that are at play.

During periods of weight gain, higher and higher levels of leptin are found in the body.  The problem is because of this, the body can develop a resistance to the leptin levels.  In other words, we don’t experience the normal decrease in hunger because our brain isn’t registering leptins presence (at least not above its new natural leptin level set point).

Worse still, when that person tries to diet, the reverse isn’t true.  The caloric drop resulting in fat loss causes leptin levels to drop, the brain perceives this as starvation.  This induces hunger, reduced motivation to exercise, and a decreased calorie burn at rest.  In other words, the body PROTECTS its fat stores at all cost.

Inflammation is tied to both leptin resistance and insulin resistance.  Chronic low-grade inflammation is thought to block the normal pathways, making them clouded.  So eating an anti-inflammatory diet is paramount to regulating normal hormone levels, including leptin.

WTE? Meal Plans only provide real food that tastes good and can be prepared quickly to help you decrease inflammation levels.

If you are overweight, then losing weight could help decrease leptin levels and decrease inflammation.  However, you must be calorie responsible.

Going on an extreme diet or drastically cut calories will only backfire.  The body will immediately fight you every step of the way on that, acting to protect it’s set point and fat stores.  That’s why our WTE? Meal Plan subscription provides 1500-1800 calories per meal plan, enough to achieve slow weight loss for most people but without creating a starvation response.  For our clients on custom meal plans who wish to lose weight, we set out to achieve no more than a 20% caloric deficit.

This not only ensures that you won’t be fighting biology the entire time you are trying to lose weight, but that you will also be able to keep the weight off.  Instead of fighting your body, you slowly change your set point eventually improving your hormone response instead of further dysregulating it.

High levels of fatty acids in the blood are also linked to leptin resistance.  Triglycerides are found in the blood and made up of three sugar molecules and one fatty acid.  High triglycerides are linked to an increased risk of metabolic syndrome, type 2 diabetes, and heart disease.  Reducing triglyceride levels requires you to reduce your sugar and refined carbohydrate intake while increasing your fiber levels.