I hope everyone had a great turkey day yesterday, my first turkey day race was a total success! It started bright and early again at 5:15am so that we could arrive to the Phoenix Turkey Day race by 6:30. I wanted to get there early because I still needed to pick up my packet and I wanted to change my race from a 5K to a 10K. After we were all settled in we took a picture with the giant turkey. 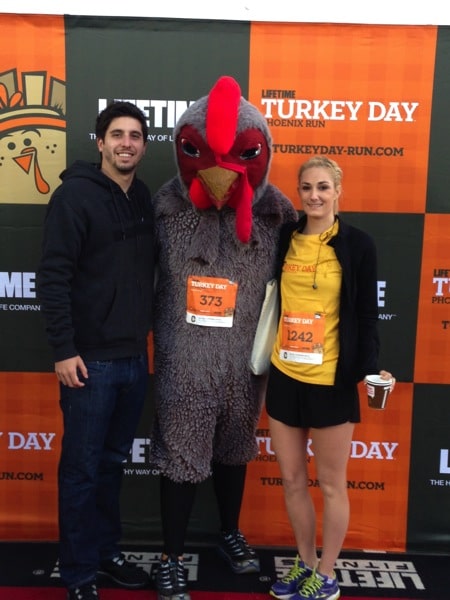 First up was the kids 1.2K dash which was A LOT of fun to watch, the top two finishers ran a 6:30 mile! Wow! Then they started to line up the 10K runners and by the time the national anthem was over my legs and feet were absolutely numb. The weather wasn’t too bad by normal person standards, in the upper 50’s, but I was freezing. I was so cold that mile one was somewhat painful running on numb feet it kind of felt like my ankles were going to shatter. I will NEVER make that mistake again! 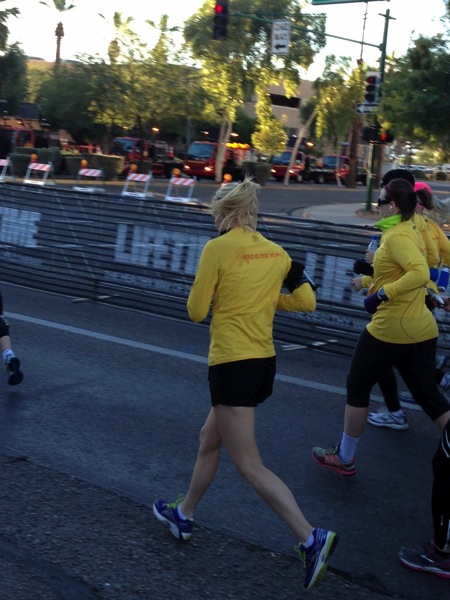 The race was two loops for the 10K runners and one loop for the 5K runners, after the first loop I was happy to see Paul cheering me on. Especially after being passed up by many of the 5K runners that started 5 minutes behind us, those people were fast! In fact, on the results page it says the top runner ran average miles of 4:54 and finished the 5K in 15:14.

I was still cold but finally thawing out some and knew I was halfway done. One more time I told myself, I encouraged myself that I would be able to hold my pace.

When I saw the time on the clock said under an hour I was incredibly happy, even though I said that I wasn’t trying to PR, and that I just wanted to have fun… secretly I knew I had gained speed and I really wanted to come in under an hour and I did! 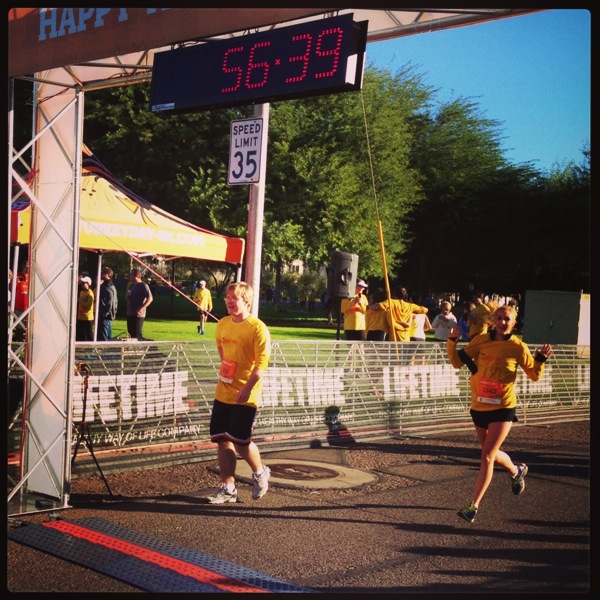 At my first race, the Maggie’s Place 10K Race in October I ran mostly 10 minute miles and I was super proud of myself for finishing especially considering I was dealing with injury recovery. That being said, in under two months I shaved off a full minute or more from each mile! So on Thanksgiving yesterday I was most thankful for being able to see progress in my ability. Most of my long runs or any run for that matter in the past 6 months (but really like five years) or so usually fell somewhere between 10-12 minute miles, so to be able to run sub 9 and 9 ish minute miles for the entire 10K was a fantastic feeling.

My final time according to my nike trainer ap was 56:51, according the official results page (which still has me listed under the 5K) it was 51:03. I know I started in the back and I started the ap before I crossed the start line, but I don’t think I was 4 minutes back… more like 30 seconds. So given the clock in the picture of me crossing the finish line… I’d estimate more like 56:10. That is quite an improvement over the 63 minutes it took me in the Maggies Place 10K, heck yes! I finally feel like I can call myself a runner, I was extremely thankful for that yesterday!