Hi Friends!  Can you believe Nala is almost a year and half? I seriously can not believe it.  What you may not know about Nala is that I asked for a dog to run and walk with for over a year.  Finally Mr. Hungry said “if we are a getting dog, we are getting a Ridgeback they are coolest dogs and you can run with them.”  We did a ton of research on them after that and then we got really lucky with Nala because someone backed out of getting her last second and she became ours!

I always intended for Nala to be my walking and running buddy, but what I didn’t know is you have to train your dog to run with you.  It took a LONG time for Nala to learn to run nicely with me, so this post is going to be just as long.  In full disclosure,  we are still working at it, it’s going to be a bit of a work in progress. I’ve tried a lot of things and done a ton of research so I thought I would share with you! 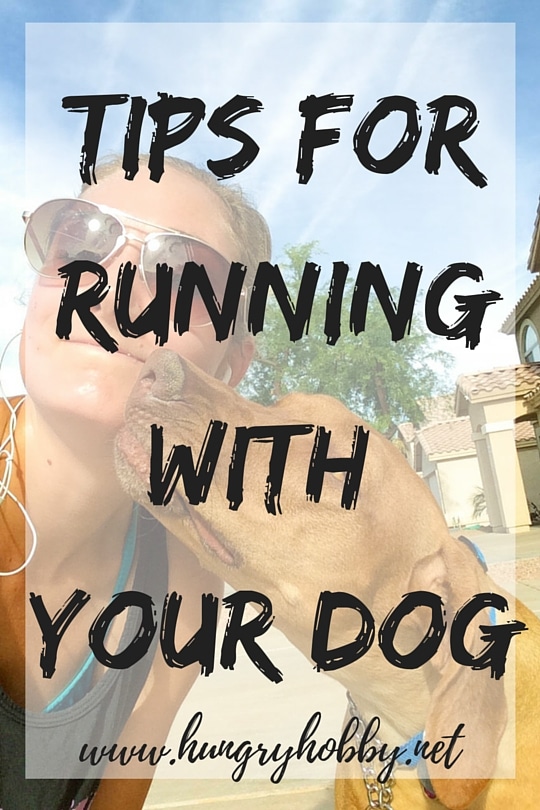 Train Them To Walk Nicely First.

This may seem like a no brainer but if your pup won’t walk nicely on a leash then they won’t run nicely.  Heel, sit and stay must be mastered for you to have a stress free run.  These cues teach them to learn to not only to stay close to you, but to listen and watch you. 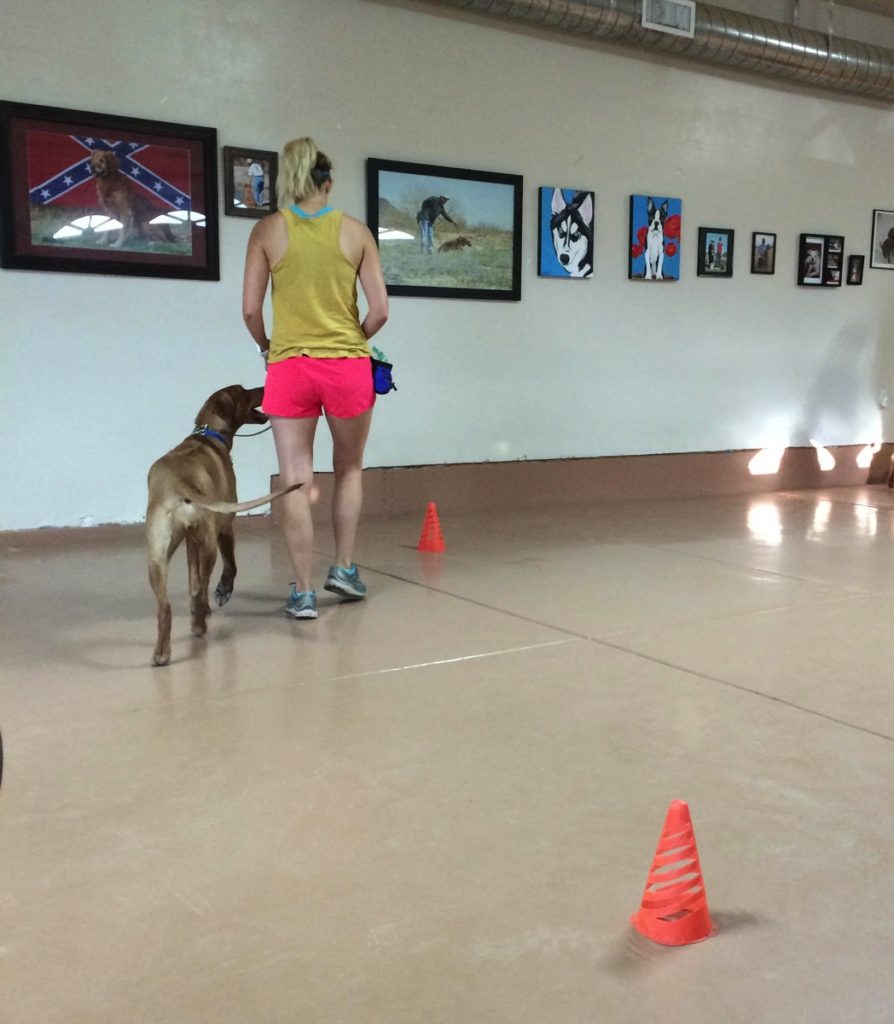 Make Sure They Know “Leave It”

Rhodesian Ridgebacks are sighthounds with a strong prey drive.  Translation: chases everything that moves including leaves, birds, cats, horses and one time, a coyote.  Ya that was a real fun moment, luckily she was still small enough I could control her.  She is also super super super people friendly, she LOVES people and dogs equally.  When she starts to visually stalk something, she may be just looking at them or if she is prey drive mode it looks like this, it’s really hard to get her attention.  This is still the most challenging part of our runs because as we are running she is trying to get to the biker, the cat, the bird, the runner we are passing.  For a long time we avoided people but as our trainers says, treat your dog like a smart animal that can be trained not something to hide away from the world.  So the end of this story is to tell you the pull towards people got a lot better when she was firm with leave it and then better and better as we practiced with more and more cats, dogs, and people.

When she was little we started her with a gentle leader and kept it till Mr. Hungry insisted it had to go at 7 months.  In honesty I did run with her using the gentle leader but it was kind of scary. 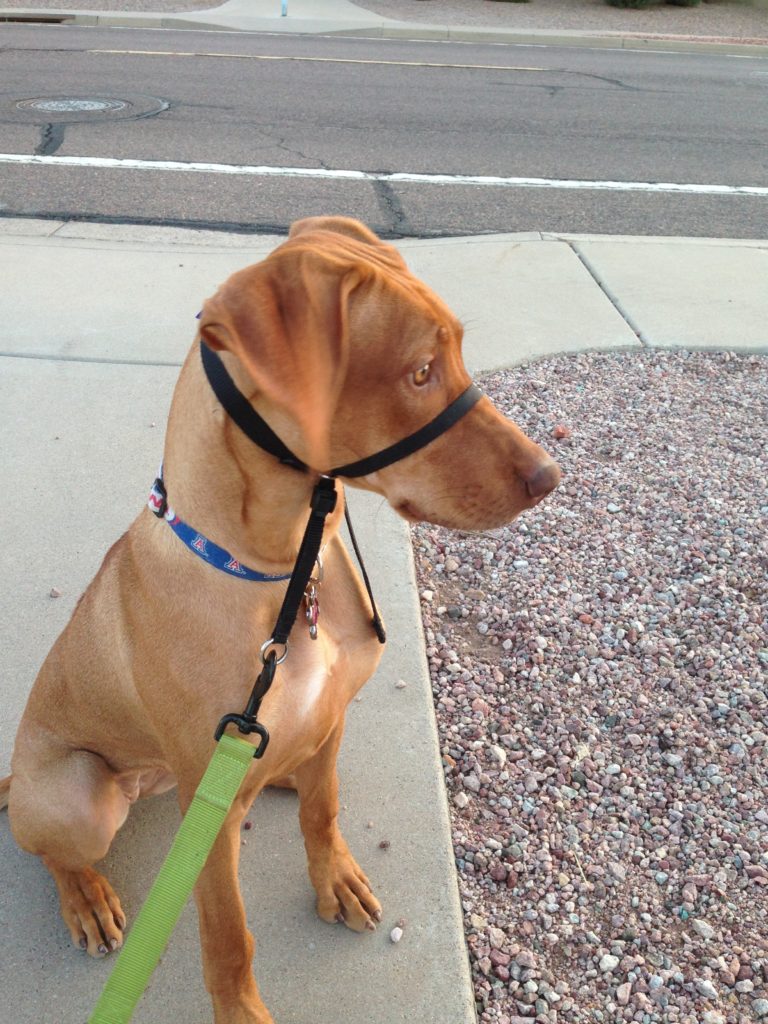 I know know they have adapters that connect the gentle leader and the collar, then you hook the leash onto that making it a bit safer to run with them. 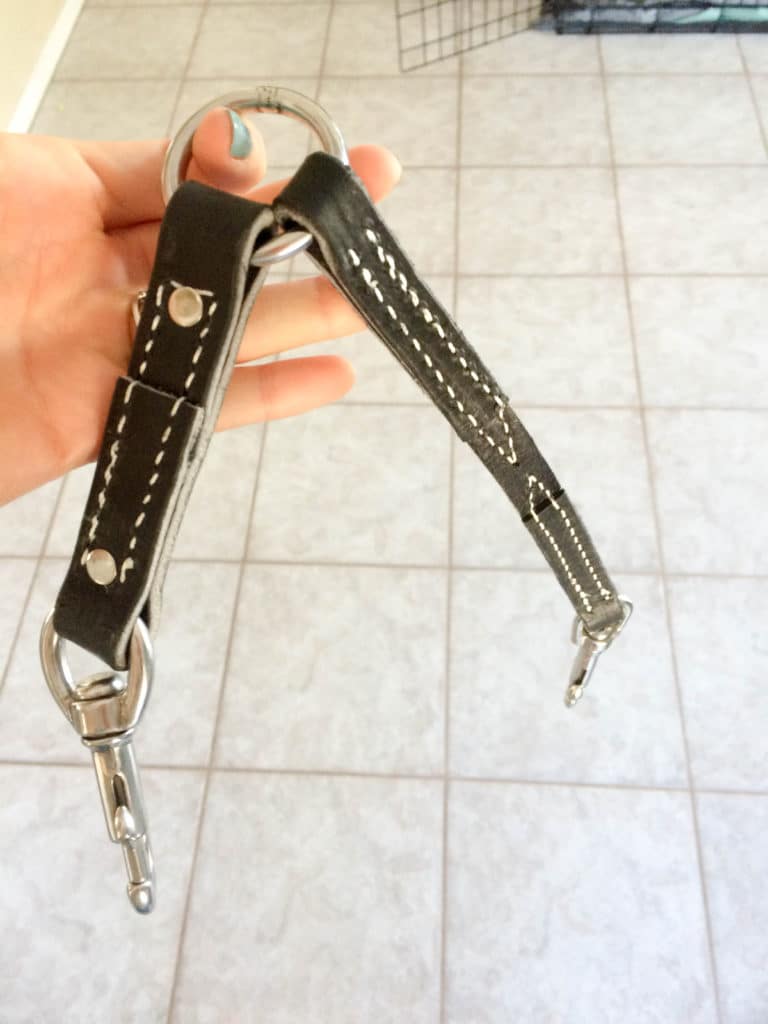 From there we got a front harness which I really liked, it did stop her from pulling or when she went after something as demonstrated in this video I somehow got lucky enough to record.  She hated the front harness though and would run away when we tried to put it on. 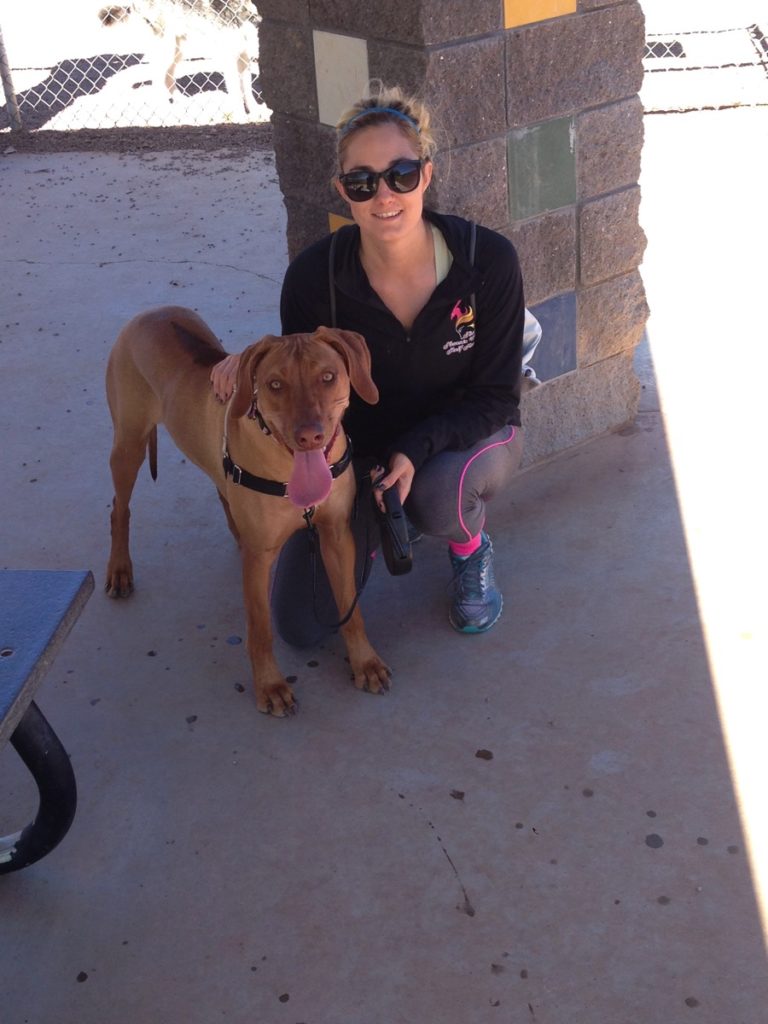 Recently we switched to a martingale collar which we are using in training.  It allows for bad behavior “correction” which is a god sent, since we have had that she has been a better walker and runner.  (Side note: the collar doesn’t stop pulling like the front harness did.  We had to learn how to use the appropriate correction technique for it to work otherwise she just pulls and pulls and pulls.) Now with this collar she stays close naturally. 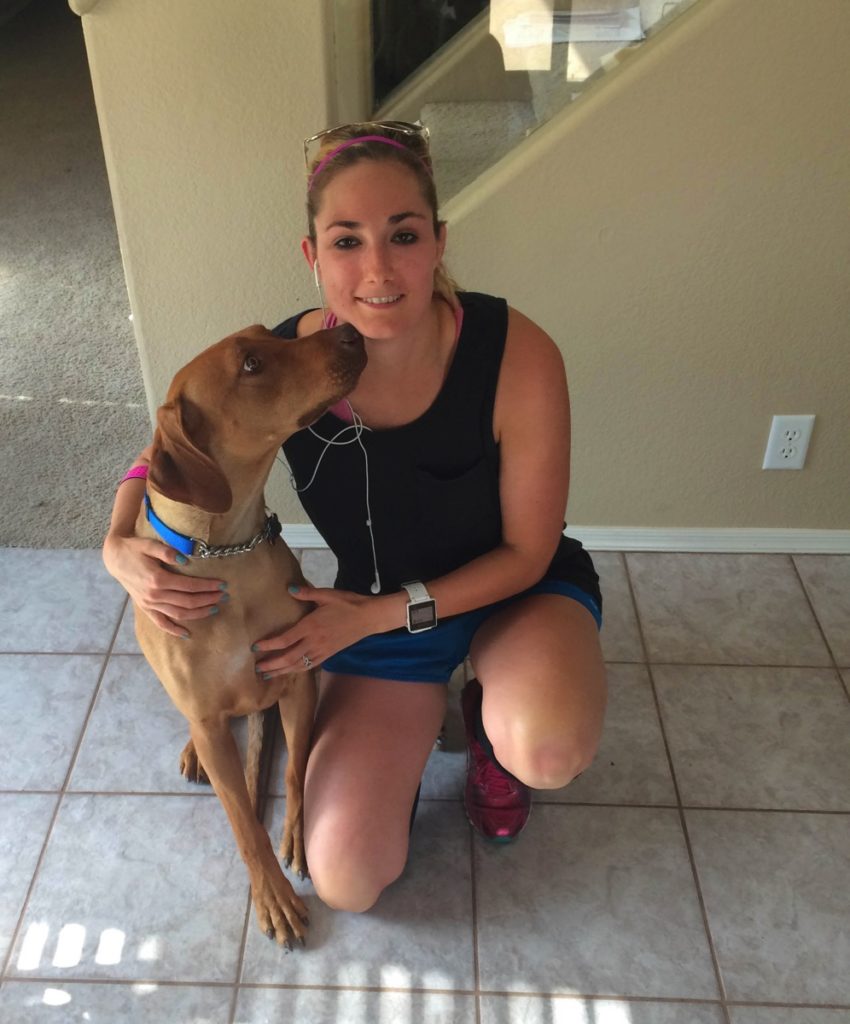 Just like I get up and get ready for the run by getting dressed, going to the bathroom and stretching/foam rolling, I try to make sure Nala gets time before the run too.  It’s always more convenient if she can go out and do her morning business before our run.

To Feed or Not Feed?

I’ve found Nala does much better on an empty tummy during the run.  Try it both ways, your pup will let you know what is best.  I figured out Nala’s sluggishness around 2 miles was do to her eating before our run, once we skipped the food she did a lot of better.  Now we feed her later the night before and feed her when she gets back from the run, it’s perfect.  (This is her slow feeder.) 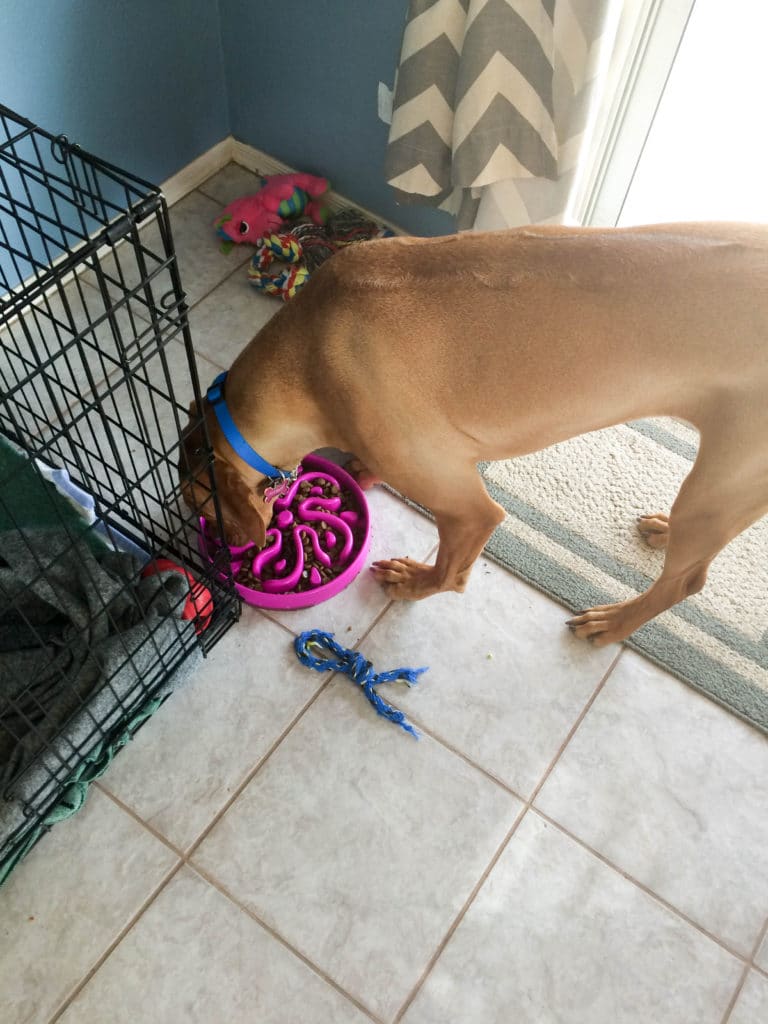 I try to get treats that she only gets when we go running, just like I give her chicken for training.  This keeps her interested when I give her commands and keeps her excited. Since we don’t eat before the run she is hungry and willing to listen for a treat better than she may be otherwise and is especially attentive for a treat she doesn’t usually get. 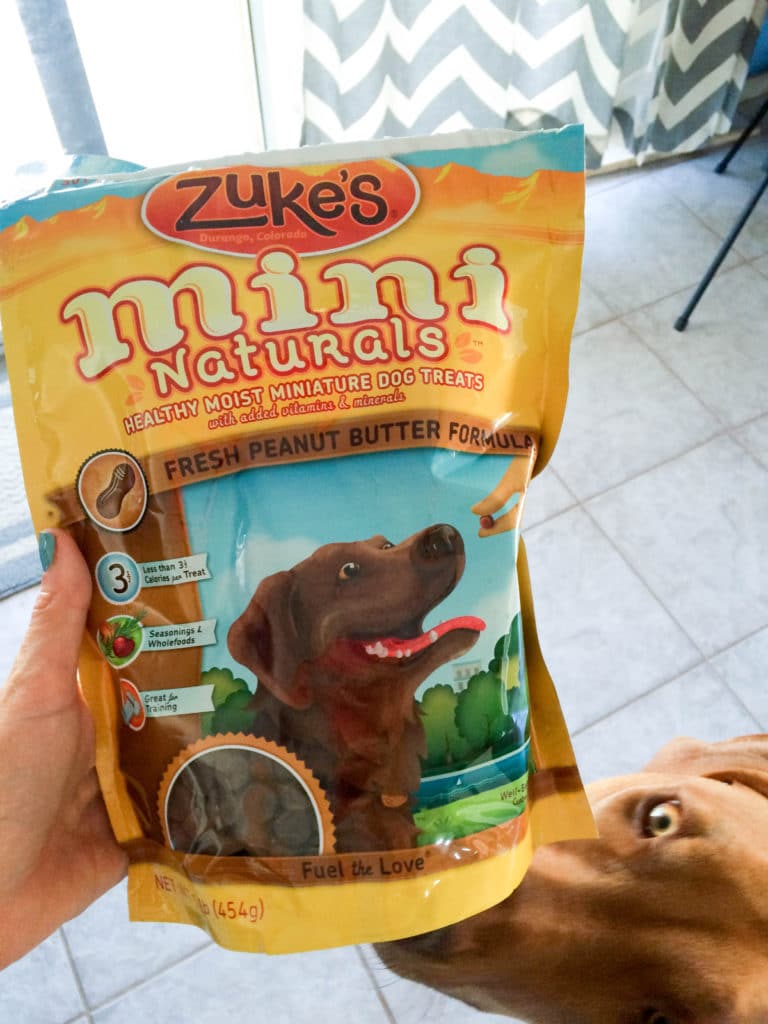 I’ve planned dog parks along the route so she can get water, shared my own water and brought her own water.

Arizona is hot, dogs overheat much easier than humans.  They can’t sweat like us, they can only cool themselves through panting (and a bit of sweating in their paws.)  So we run earlier than I would on my own. 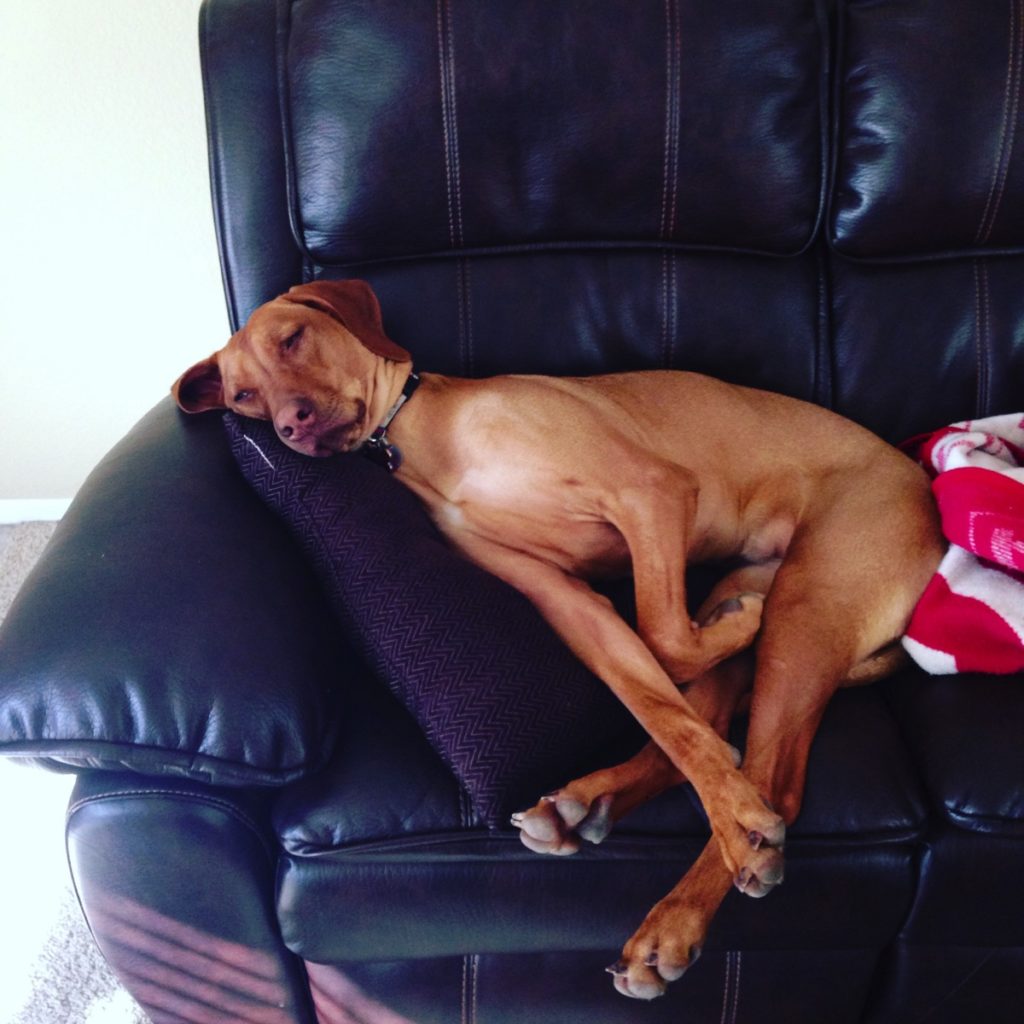 Let Them Set The Pace.

This is the most important thing I had to learn in order to take Nala on long runs.  Instead of always looking at my watch to try and keep pace I just accepted that we were gonna go just about fast as Nala wanted to go.  I  found that she would get really excited and start jumping up and down, trying to bite the leash and act naughty when I went to fast.  Since I started letting her set the pace with a little traut we’ve been able to go a little bit faster or a little bit further ever time.

Be Okay With Breaks – Lot’s Of Breaks.

When I’m training for a race it’s hard for me to accept that if I want some company on my run, there are gonna be breaks.  I try to offset this by making sure she goes potty before we go but she often still does her business (number 1 and 2) at some point during the run.

Running With Bags of Poop

Oh ya this happens.  I plan out routes where I know their are dog waste bins or trash cans I can ditch it so I’m not running with it for too long.  I also run down the canal path where there are many piles of horse poop so I don’t feel bad if I don’t pick up the poop.  However, keep in mind, dog poop spreads disease not horse poop, so most of the time I still pick it up.  I’ve thrown bags in bushes and picked them up on the way back too.  Running with a bag of poop was not what I pictured when I envisioned me and my furry best friend going for a run, but it’s the reality of it! 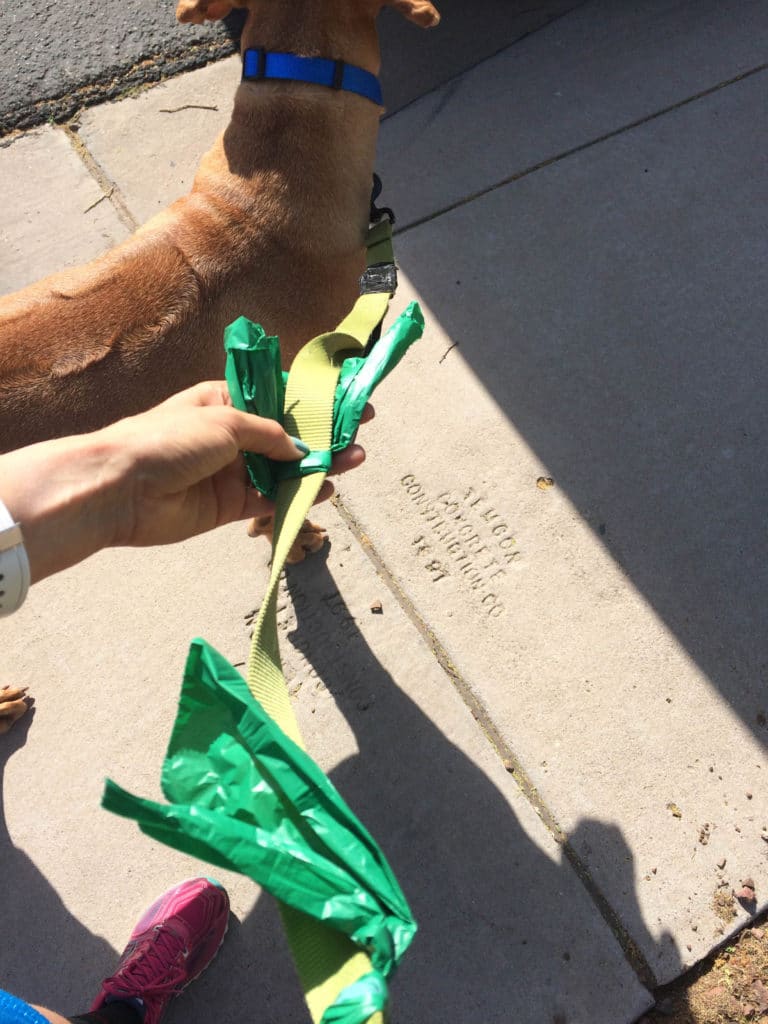 True with running in general but especially when I have Nala with me, I try not to be carrying anything in my hands.  It’s important to be able to have full control over her if I need to, like when she sees a rabbit or biker.  I recently got this elastic waste band, which I’m calling a modern day fanny pack which is perfect for treats, keys, and my phone.  That way I have one hand for the leash and one hand for carrying a poop bag if necessary. 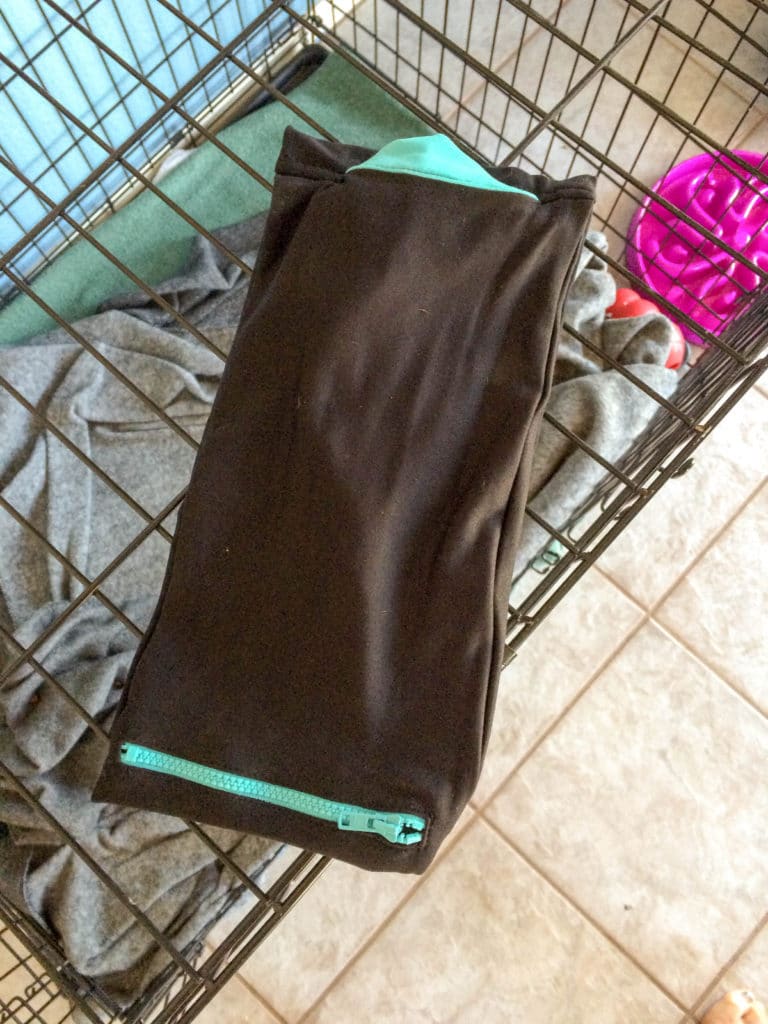 UGH this is my PET PEEVE.  I used to get so annoyed when we’d be jogging along and everything would be fine then it seemed like out of no where she’d turn around and start jumping and biting the leash like she was possessed.  Of course I’d get angry and yell leave it a million times but then she would just jump and side run next to me.  I tried ignoring her but it seemed like she could do that side run jump thing forever.  Now we finally figured it out, thank the lord.

This happens with Nala for two reasons: she’s bored or she has to go potty.

Trouble is you can’t tell which one it is so here is what I do now.  If leave it doesn’t work then I stop dead in my tracks and tell her to sit.  I stop so abruptly we both kind of fall forward and then I wait for her to calm herself.  Sometimes I have to put her in a down, sometimes I have to walk it out with her. I don’t give her any attention, I just wait for her to calm.  The more I did this the more she realized she wasn’t going to get any attention from that behavior and she goes back to running nicely quicker nowadays.  I’ll tell you the first few times are infuriating though, you just want to finish your run and the dang dog be jumping up like a bunny rabbit next to you.  I refer you back to being okay with lot’s of breaks.

Get To Know Your Dog

I enjoy our runs together, she does funny things, I don’t get as bored, it’s just better.  I now know that running with your dog is something you have to train your dog to do, but the training aspect is what bounds us with our dogs the most.  I’ve also realized that I had to get to know Nala’s run habits and needs just like a person.  Human runners all have slightly different routines that work for them: eat/don’t eat, bathroom, warm up needs, coffee/no coffee, morning/evening etc… Dogs are the same way, your pup may not have the same needs as Nala but the more the two of you run together the more you will figure it out!  It will only make your closer as dynamic duo!

Training your dog to run with you might happen right away or it might take a while like it did us.  In the end it’s totally worth it, if nothing else so you guys can take selfies together after surviving the run! 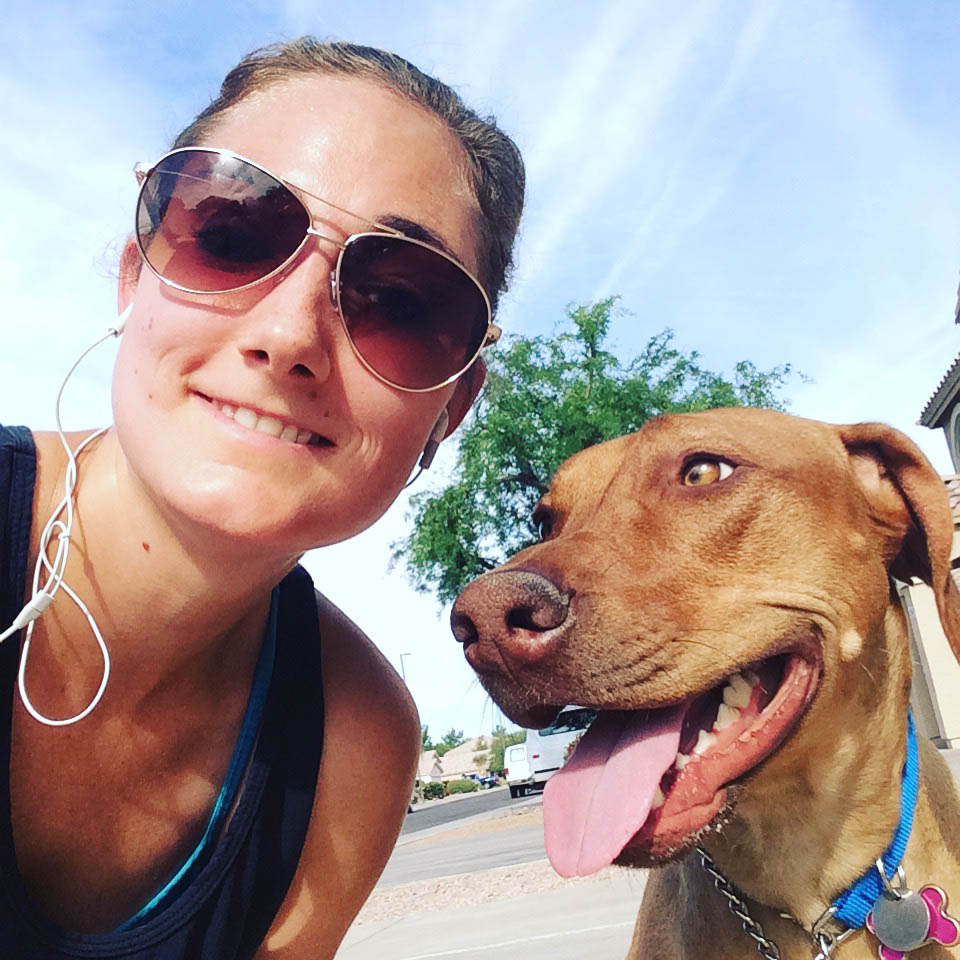