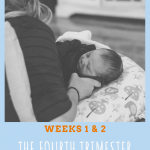 Here we are.  As of Friday, KJ is 2 weeks old! Every day I get more confident in my abilities, things that scared me before (like burping him) are slowly becoming second nature.  I’ve been overwhelmed by the support from you guys offering up tips and tricks just as you did during pregnancy.  I’m so blessed to have this community <3 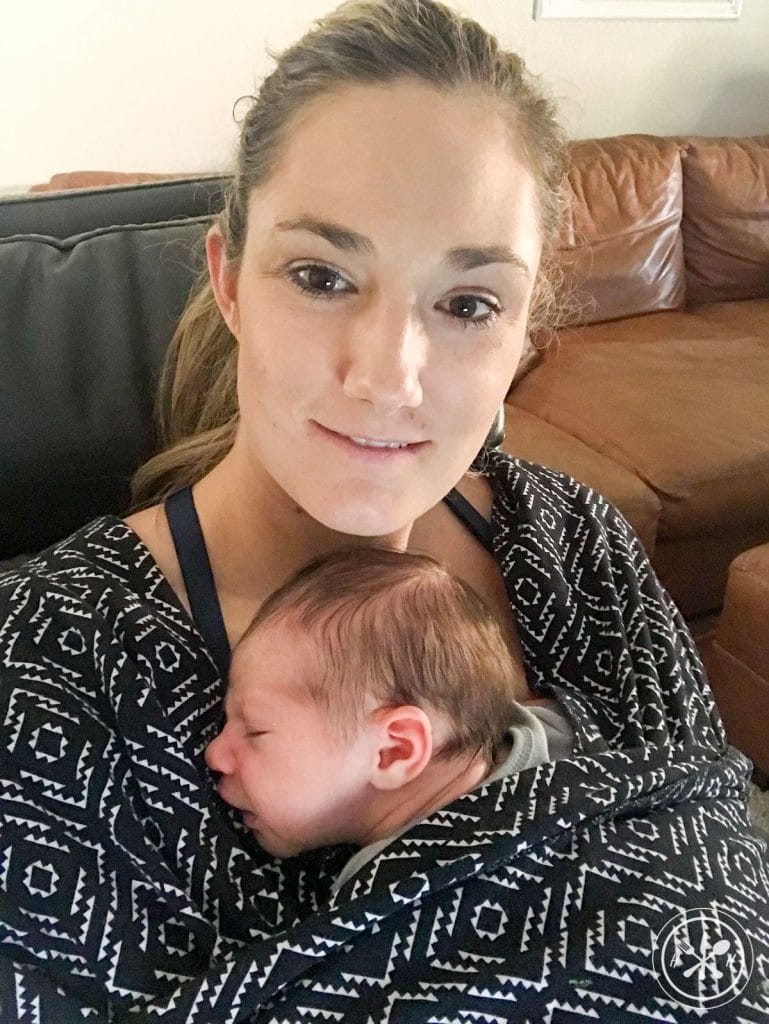 Back in May, I began following Jen’s postpartum journey.  I don’t remember how I found her but even though I was a new reader of hers, I appreciated her detailed recap of the fourth trimester so much.  I probably had a better idea of what to expect from pregnancy than I did for the recovery process and having a newborn.  I found it so interesting and helpful as an expecting first-time mom to read her updates, I knew that I wanted to follow suit with a similar format and continue to document updates during the “fourth trimester.”  (PS she had a c-section so if you have one scheduled or end up needing one I highly recommend checking her fourth-trimester posts out.)

So I’m planning to do these posts bi-weekly just like my pregnancy updates and they will be more focused on my journey into motherhood instead of KJ’s development and milestones. 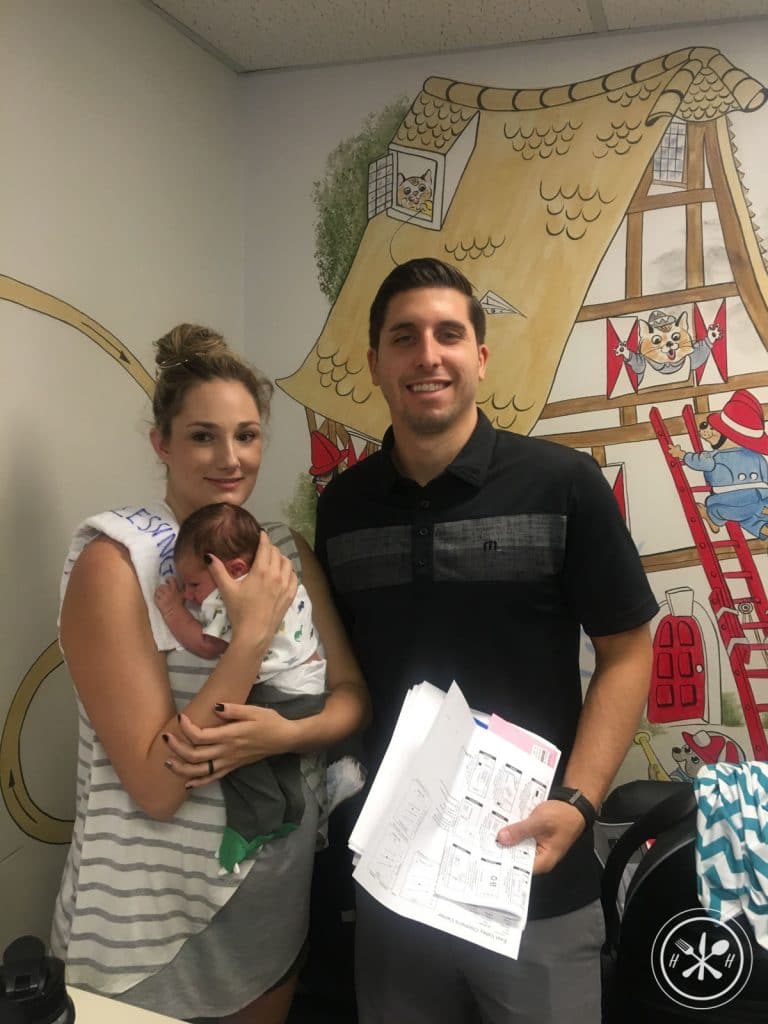 I had very little swelling during my pregnancy, what I did have wasn’t noticeable at all.  So imagine my surprise when I looked down after delivery and found my feet to be twice their normal size.  The nurse and my doctor assured me it was normal and could take a couple weeks to go down.  Mine was visibly better at the end of the first week.

As expected, I came home looking like I was 6-7 months pregnant.  To my amazement though, every day my stomach began to shrink.  Mine continued to shrink throughout week two until I was left feeling flabby but no longer pregnant looking.

As of this week, I’m down 21lbs.  I do plan to share about my own weight loss journey but I’m not sure how I’m going to do that yet.  As I mentioned in my early pregnancy updates, I was up in weight before I got pregnant (I was injured and I experienced an early loss during the holidays.) So I still have quite a bit to lose when you include the weight I was up before I got pregnant.

There is so much judgment that goes into postpartum weight loss for women making them extremely vulnerable.  Lose weight too fast and you aren’t focusing on your child.  Lose weight too slow and you’re judged as well.  My plan is to be patient and trust my body.  I’m already back to loving veggies (something I struggled with in pregnancy) and all the freezer meals have really helped us eat pretty dang healthy the last couple of weeks. 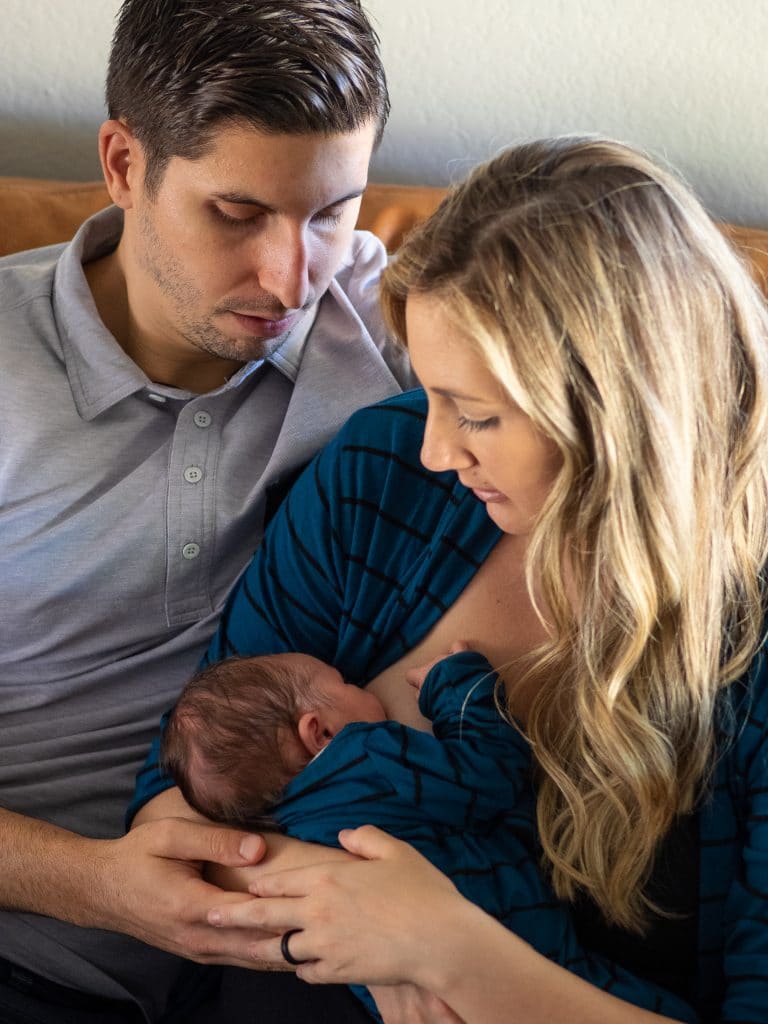 I’ve been using the Lansinoh app to keep track of feeds, it has a pretty useful timer on it. 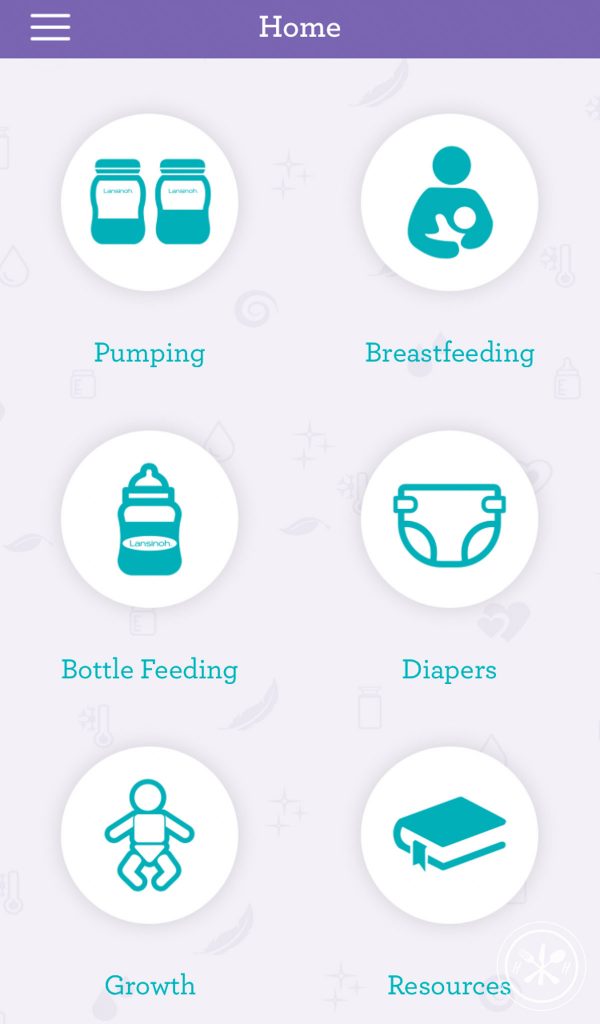 I shared a bit about our breastfeeding journey so far in my post about our hospital stay.  As far as breastfeeding goes, this past couple of weeks have been a rough learning curve, but not as bad as I expected.  The worst thing was waiting for my milk to come in.  I’m not 100% sure when it actually came in, I know for sure it was in by day 5 because that’s when I met with the lactation consultant at my pediatrician’s office and she showed me how to hand express. Once I actually saw the milk I cried big crocodile tears of relief and I felt so much more confident.

I’m still not sure if I experienced a letdown or not yet.  I’ve experienced a warming sensation while KJ was nursing but I don’t know if that was it. I haven’t had any issues with engorgement either.  I’m reluctant to pump until the one month mark because I know an oversupply can cause issues as well.

In the first week, my nipples were cracked and did bleed but I found with some TLC I was able to get them on the mend.  My two saving graces were Motherlove Nipple Cream (so much better than the lanolin they gave me in the hospital) and Medela Soothing Gel Pads. Once I got serious about using those regularly in between feeds (kind of annoying because you have to wash your breasts after using the gel packs) and nursing spread out to 2 hours or so my nipples healed up pretty quick.  Since then I haven’t had very much pain at all! I’ve kept up using the nipple cream though, especially when he cluster feeds in the evening.

The last update about breastfeeding is where I’m feeding him at night.  The first week I tried feeding him in bed propped up with a lot of pillows.  Then one night I fell asleep with him on me for 2 hours, nothing bad happened we woke up in the same position we both fell asleep but it scared me so I no longer breastfeed in bed.  I go out to the recliner in the living room so I can stay awake, watch TV, etc..

Wow, that first week was INSANE so much harder than I expected.  KJ didn’t want to sleep anywhere but on someone, especially at night.  You can forget laying him on his back, that wasn’t about to happen at all.    He fought the swaddle and just hated to be put down in general. Mr. Hungry and I decided to do two hours shifts at a time which worked out well. 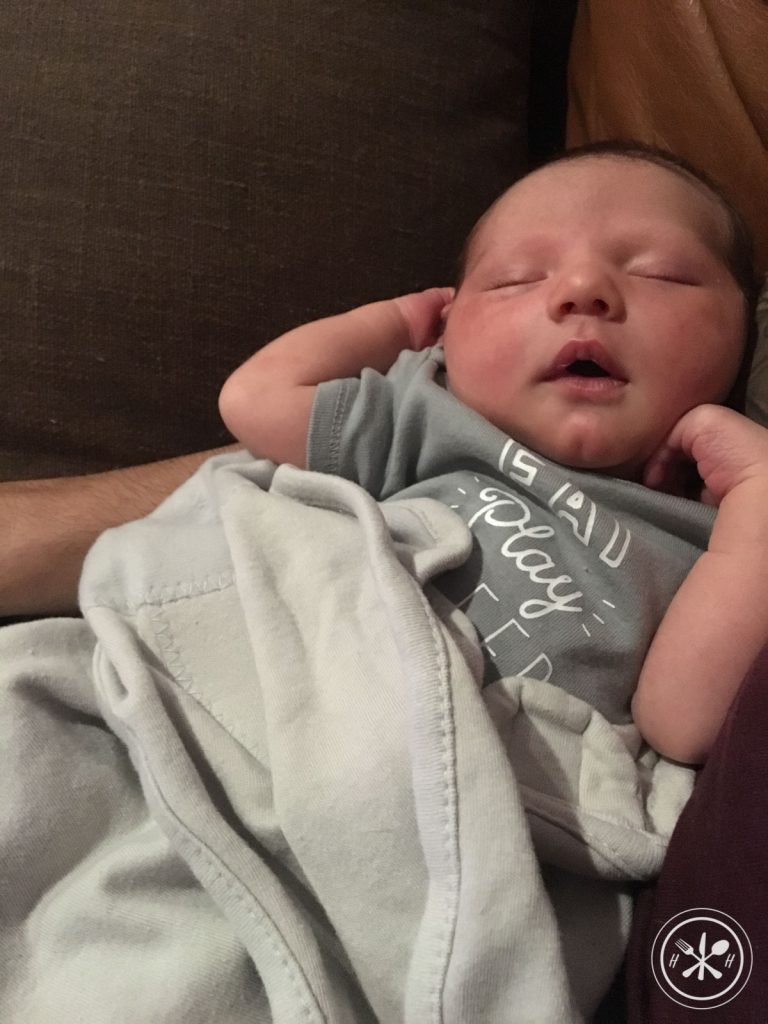 The second week Mr. Hungry and I decided to limit his daytime naps to two hours max and that’s when things seemed to start to improve.  Eventually, his nighttime stretches of sleeping on his own started to grow, albeit sporadically but still.  He currently sleeps in the SwaddleMe By Your Side Cosleeper which is not on our bed but placed in the bassinet section of the pack n play.  We are just now starting to get 2-3 hour stretches of sleep out of him at night which is glorious when it happens, usually only once a night.  We started routinely swaddling him at night.  We have SwaddleMe swaddlesSwaddleMe swaddles and the Halo Newborn Sleepsack. 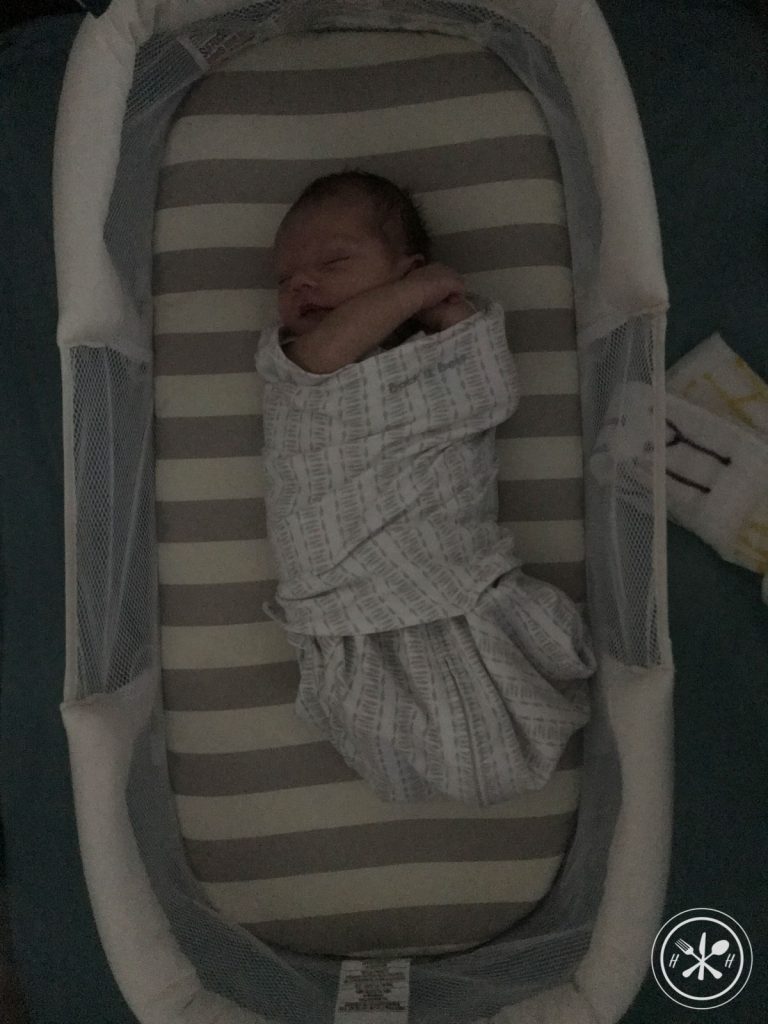 The Halo Newborn sleepsack is definitely my preferred swaddle, after using it KJ stopped fighting the swaddles.  We now use the SwaddleMe swaddles as back up but I prefer the Halo Sleepsack.   This past week, if he did happen to wake up less than an hour after I put him down Mr. Hungry gets up and changes his diaper/rocks him back to sleep.  If it’s over an hour I get up and change/feed him.  This system has been working pretty well because I get at least an hour of sleep at a time.

Bleeding/Cramping. The bleeding was pretty heavy during the first week so I continued to use the adult diapers that I had brought to the hospital.  I still think they were way more convenient than pads! During the second week the bleeding kind of tapered off, I wouldn’t have any for a couple days then it would start up again for a day and stop.  The cramping in the first week was insane, I took 600mg of Ibuprofen every 6 hours on the dot for the whole first week.  The second week I begin to taper off until I didn’t need them hardly at all anymore.

Appetite. In the hospital, I was STARVING and my appetite continued to rage through the first week.   This past week it’s kind of been up and down.  One day I’ll be STARVING and the next I won’t be that hungry.  I also think this varies with how much sleep I’ve gotten as well. 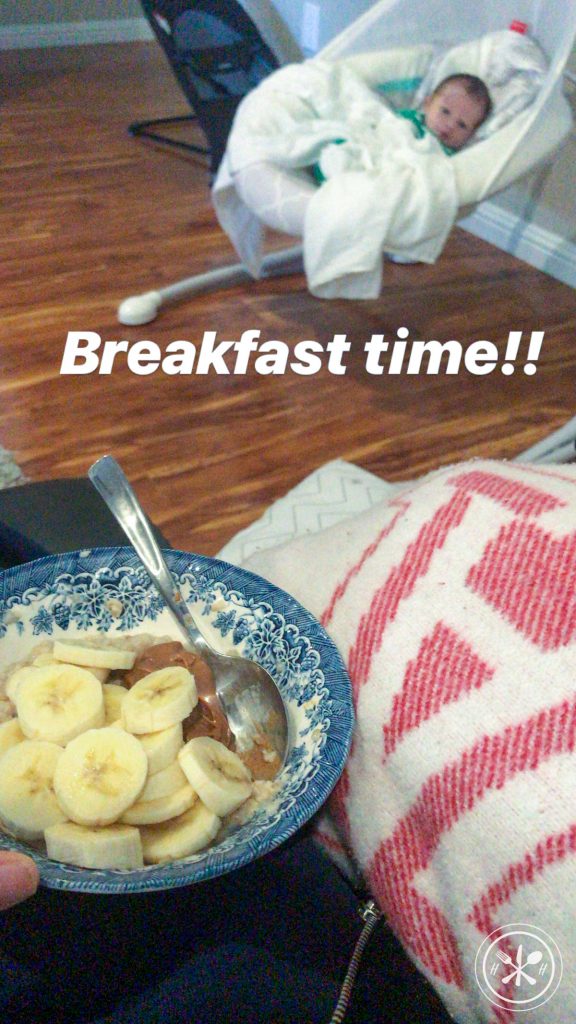 Pyogenic granuloma.  At the end of my pregnancy I mentioned the “pregnancy tumor” I’d developed on my gums.  Kind of embarrassing but there wasn’t anything I did to cause it so whatever.  It started as very small redness and continued to grow despite taking care of it exactly how I was told to do so.  Apparently a hormonal response to inflammation in the gums that become exacerbated during pregnancy.  It’s in between one of my front teeth and the next one over and now bleeds when I eat so I had to go back into the dentist who referred me to a periodontist.  I go next week go get it removed.  The periodontist explained they aren’t super common but they aren’t uncommon either (uh, thanks?) due to hormonal changes during pregnancy and nursing.  Even though he is confident that’s what it is (he said looks textbook) they still send it off to the lab to ensure it is benign.  Lovely right?

There have definitely been some moments I cried out of pure frustration but overall I feel pretty good.  It was so so so nice to have my MIL here helping out and showing us how to do certain things.  I was definitely sad when she left.  However, it was also nice to have a week with just Mr. Hungry and I figuring it out together.  He went back to work today and I’ve definitely been dreading it.

Nala is doing great!  She has had a couple of “naughty episodes” of not wanting to get off the bed or stealing a burp cloth but other than that she is really doing well.  She shows interest in the baby for a second or two to sniff him but that’s about it!

I started walking at the end of week one and have slowly increased to doing about 45 minutes, but super slow.  So far the walks I’ve gone on are with Nala solo or as a family, it will be interesting taking the baby and Nala out by myself! 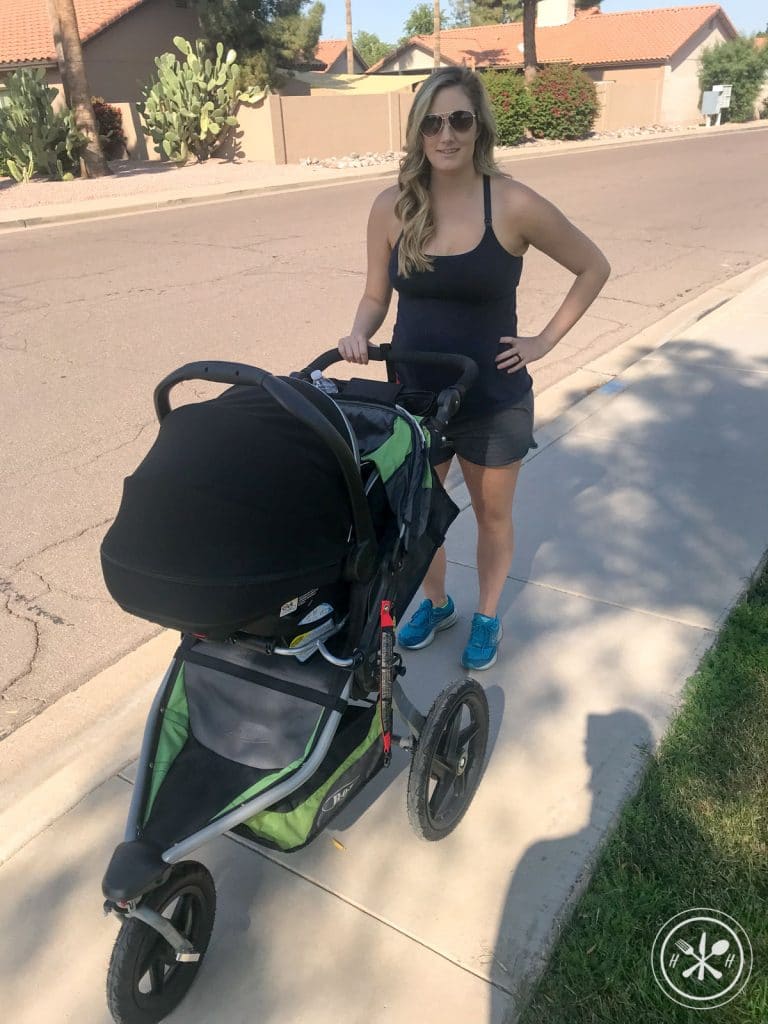 This is the nursing tank I’m wearing in the picture above.  I’ve basically been living in them so I just ordered 3 more so now I have one for every day of the week.  It’s perfect under my moby wrap or with a cardigan now that the weather is cooling down.

Man, it took me literally 20 attempts to get this post finished and published!  After writing how long this is maybe I should do these updates weekly so they aren’t so long?  I’ll think about that while I’m out walking today!

Questions of the day:

Any good sleep training books you would recommend?

Did you breastfeed?  Did it get easier?

What surprised you about your body changes after pregnancy?