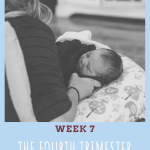 It’s weird writing these posts because it feels like I’m a week ahead because week 0 is week one on here.  So today he is 7 weeks old but I’m reporting on week 7.  I’m probably rambling and making zero sense which I do a lot these days.

Nothing that new to report here.  Although I think it’s interesting I still have a pretty intense linea negra.  I thought for sure it would have disappeared by now.  As far as other skin stuff, I did get some stretch marks on my sides which are fading pretty quick. I’m not doing anything about them though except using bio- oil inconsistently.

Got the green light to begin exercising, so that’s exciting!  It was a  quick appointment, she checked me out and said I was good to go.  She also checked out that lump in my breast that fills with milk and decreases after feeding.  She is 100% certain it’s a galactocele since it almost disappears after nursing but she wrote my ultrasound paperwork so I wouldn’t worry.  From what I read, I’m lucky it isn’t much bigger, so I hope it stays that way.

Things are still the same, I’m getting about 7-9 hours of sleep between the hours of 9 pm and 9 am.  However, my nights are SO MUCH EASIER than they were before because he usually goes back to sleep without a fight.

He usually goes down between 7 and 9 pm (it’s a crapshoot!) and sleeps 4-5 hours, breastfeeds, then is up again in another 2-3 hours. If it’s 3 hours, then I feed on one side and get up to pump the other side around 5 am ish.  He usually wakes up again around 6 am but I’m able to get him down again for 1-3 hours, which is usually when I go back to sleep.

During that appointment, it was like all the stars aligned perfectly.  KJ was in an unusually pleasant mood which was great because I was running behind (go figure with a newborn) and then he slept through the whole appointment.  I was so worried about going to the appointment alone and it really wasn’t a big deal AT ALL.  A few reasons why I think this happened 1) because I lucked out he wasn’t that fussy 2) we’ve been working on him putting himself to sleep 3) I brought the sound machine with us.  (Tips from @takingcarababies )

Anyways, that experience gave me the confidence to venture out to Target the next day which also went pretty well.  He wasn’t too happy during the car ride back (read non stop screaming), but since that was less than 10 minutes of the whole ordeal I’d say it was a win.  The actual experience inside Target was rather pleasant and I noticed I just felt better-going places.

So that will be the goal next week to get out more.  I know that not every time I go somewhere will be pleasant, however, I think I just needed to know there was the potential it could go alright.  Before this week I felt like going anywhere with him was just dumb because he would be fussy the whole time.  Now that he has learned to nap a little bit better it’s much easier to go places.

On Thursday I picked up the pace of my afternoon walk with the baby and Nala.  It felt amazing to get a little sweaty!  Then later that night I did my first workout!  I decided to purchase Gina’s Post Baby Bod 12 Week program.  I probably won’t follow it exactly, but I plan to use it as a template. Mr. Hungry has made some additions to our gym since I’ve been able to use it, so happy to be back at it!

I did the first workout from her program on Thursday and whoa was it humbling.  It was upper body and I did everything with 5 and 8lb weights.  It’s crazy to me to think I was using 25# weights to chest press and now I’m using 8lb weights. Like I said, definitely humbling but it felt great.  Big shout out to Mr. Hungry to watching the baby during his fussiest part of the day so I can get a workout in!

What I’m Loving This Week