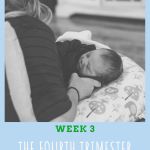 Hi friends!  I hope you all enjoyed Sarah’s post yesterday!

So I was going to do these posts bi-weekly, but due to the length and popularity of weeks 1 and 2 post, I thought I’d maybe switch to weekly, at least for now.  I’m so surprised by how fast things change with my body and how different KJ is every day, two weeks is more to recap than I anticipated!

Before I get started with this week’s recap, I have to say thank you for all your wonderful comments on last weeks post and your messages!  So many of you offered words of encouragement right when I needed them the most, sending you all virtual hugs and glasses of wine!

Right now I’m just eating intuitively and enjoying craving healthy foods.  I am weighing myself about once a week, more because its fun to see the numbers go down instead of up not because I’m worried about it.  Right now I’m still losing pretty steady but I know that will probably slow down.  I’m doing my best to keep my calories up to help with milk production and not lose too much too fast. 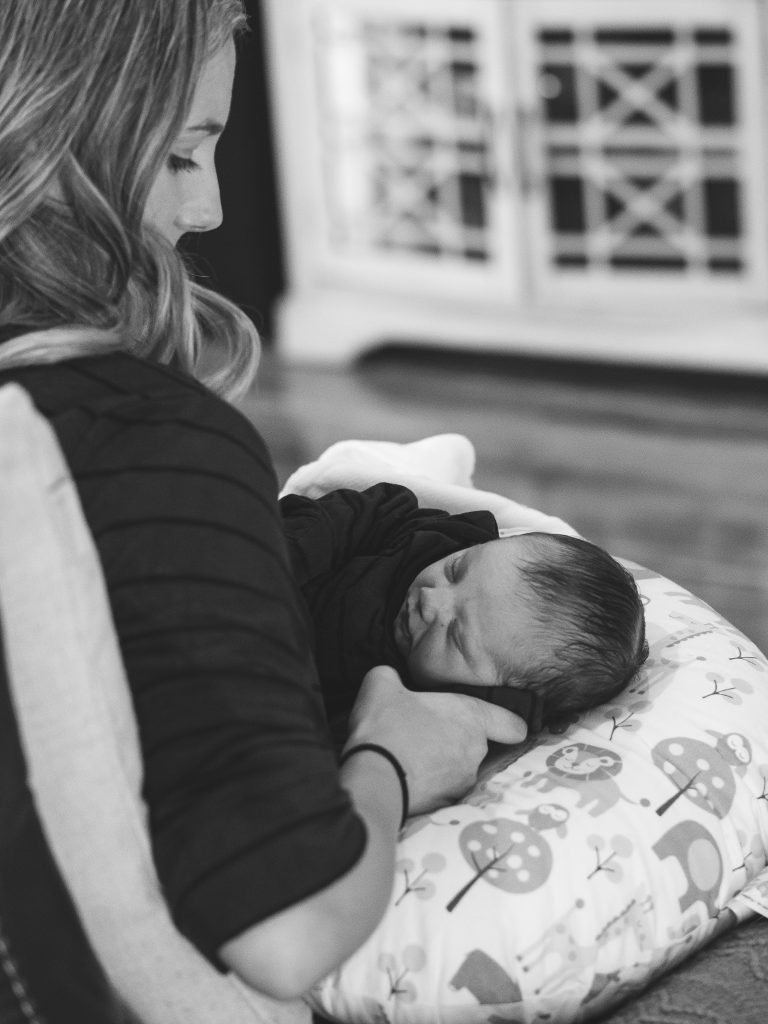 Week 3 was a fun ride.   I started to have a lot of pain on one side while breastfeeding which was weird because it had previously been going well.  I took KJ into the pediatrician, and he was treated for thrush (diaper rash and orally), so I booked another appointment for me and I was treated as well.   I was treated with one dose of Diflucan and given a cream just in case that oral didn’t do it. Thrush likely developed from the antibiotics I was on from my belly button ring area that got infected or irritated in the hospital.  Yep, one thing after another!

The breast pain wasn’t improving so I started to feel around, and I noticed a lump under the nipple that changes size through the day.  Assuming it was a clogged duct, I did a lot of massages, hot compress and adjusting the position of nursing.  I worked on his latch, and I even went to a breastfeeding support group meeting.  The Lactation consultant there suggested that his frectonomy may need to be redone and we should have been given exercises to do after it was done.  She suggested another lactation consultant meet with who may be able to repeat the frenectomy for the second time.

She also suggested calling my doctor to get an antifungal, antibacterial ointment prescription or making one myself.  Over the weekend the pain significantly resolved by really working on his latch and using gel pads as well as nipple cream but the lump still comes and goes.  Gets bigger when engorged and goes way down when not engorged, so I’m going to my OB this week to get that evaluated and ask her about the antifungal/antibacterial ointment recommendation as well. 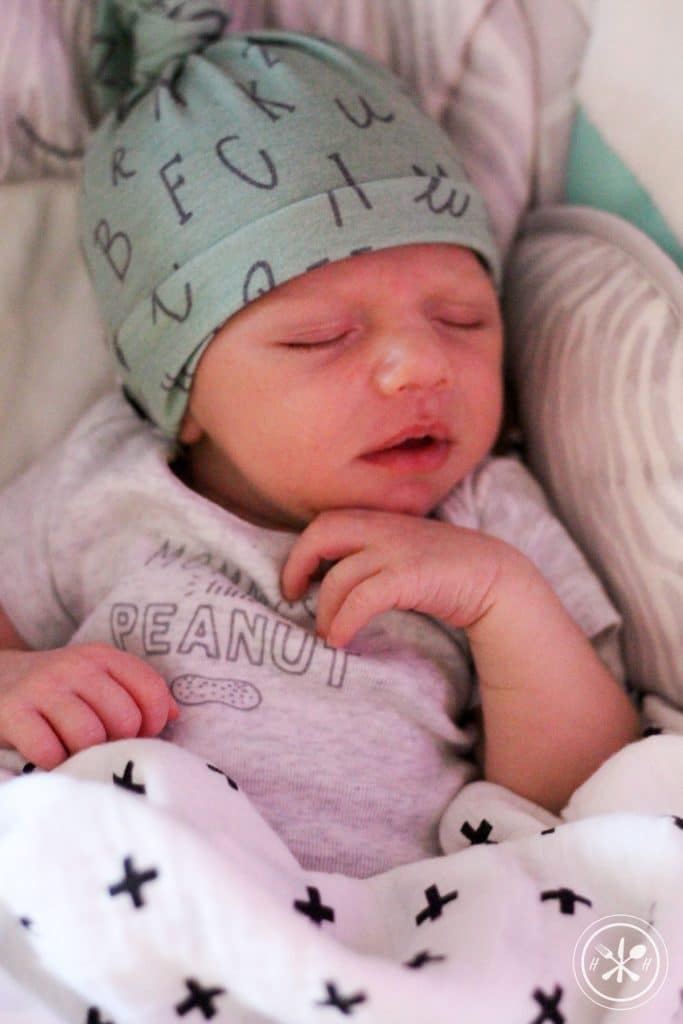 Slaaaeeeeeeepppppp.  Things were up and down over the week sometimes he would sleep 2-3 hours at a time and sometimes only 40 minutes.  We continued our routine of Mr. Hungry waking up to change him if he had been asleep less than an hour since his last nursing session. Luckily though, over this past weekend things improved!  I’ve consistently been able to put KJ down around 8-9pm, and then we go to bed right after.  For most of the night, he sleeps 2-3 hours at a time waking up only to nurse and then going down relatively quickly after that.

Currently, we are loving:

It’s been so much better; I feel like I can function during the day and my mood is so much better with more sleep!  Here is to hoping it keeps working!

Bleeding/Cramping.  Not having any cramping anymore but bleeding picked up again.  I keep thinking of those funny memes about periods “I don’t trust anything that bleeds for seven days and doesn’t die.” What about something that bleeds for 21 days? LOL I know it’s normal, but any time now it can go away.

Appetite.  Feels mostly normal.  I started getting hungry around my 2 am feeding, so I bought perfect bars to eat 1/2 of per night.

Pyogenic Granuloma. I explained this last week, so read that if you want to know what this is.  I had it removed which was no big deal, the procedure was fast and didn’t hurt too bad.  I’ll take that over a filling or any drilling on my teeth any day.  The doctor wasn’t going to send it to the lab because he said it looks textbook, but I asked him too anyway since insurance would cover it and my original dentist said that was standard procedure.  Always better to be safe than sorry right?

As I mentioned with improving sleep comes improving mood.  I’ve felt a little anxious with the infected belly button ring, breastfeeding issues, thrush, and mouth surgery going on meanwhile learning to care for a newborn.  I mean that’s a lot for anyone to take much less at three weeks postpartum.  I’m hoping things settle down after I see my OB this week. All that aside, I’m doing well getting out of the house for walks.  I’ve had a couple of visitors; my aunt brought me this adorable sign she got on Etsy! 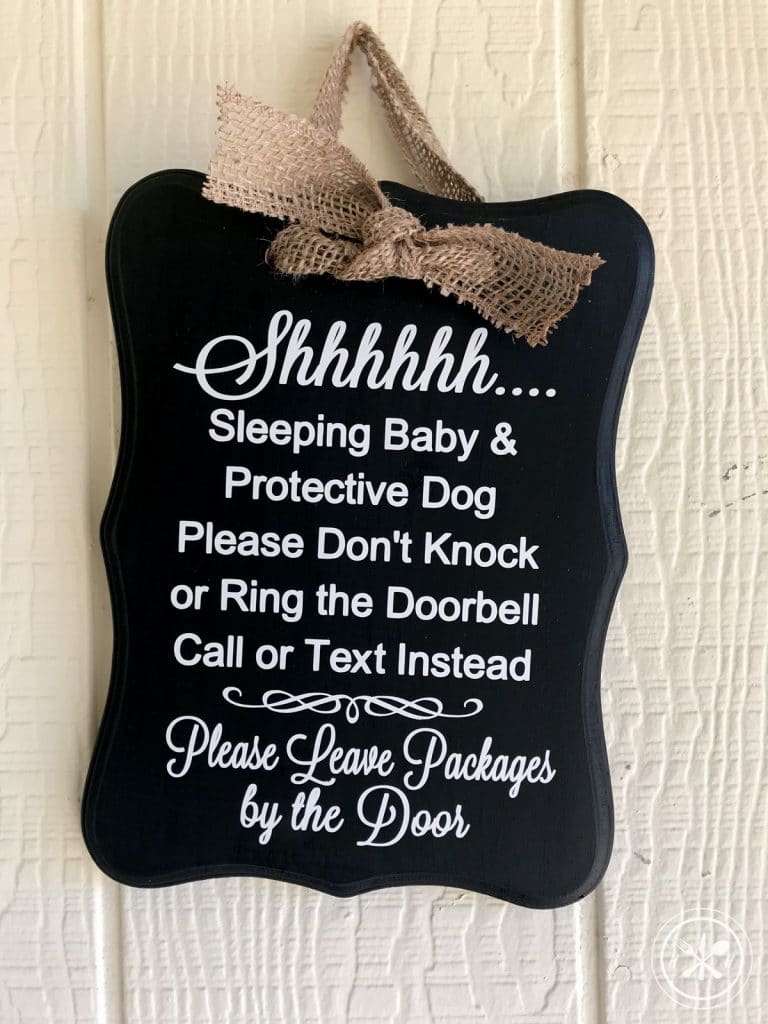 And I started to make plans with friends, last weekend we took KJ to meet his godfather. 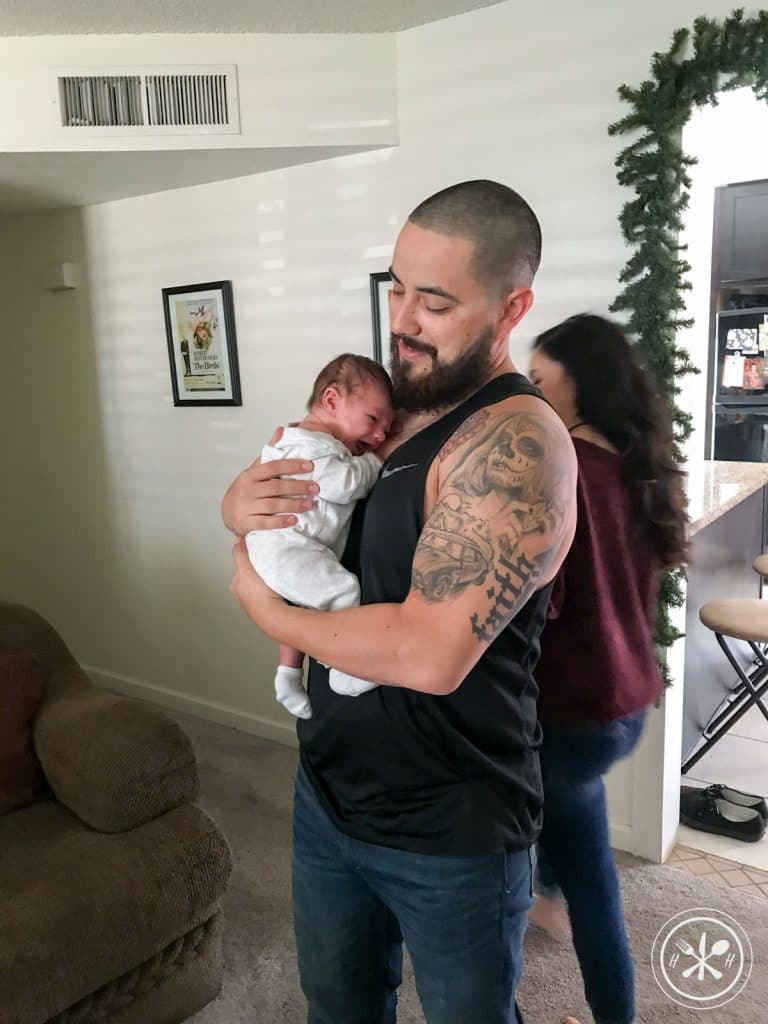 Luckily with the holidays here there are lots of excuses to get together with family and friends, so I’m looking forward to that! 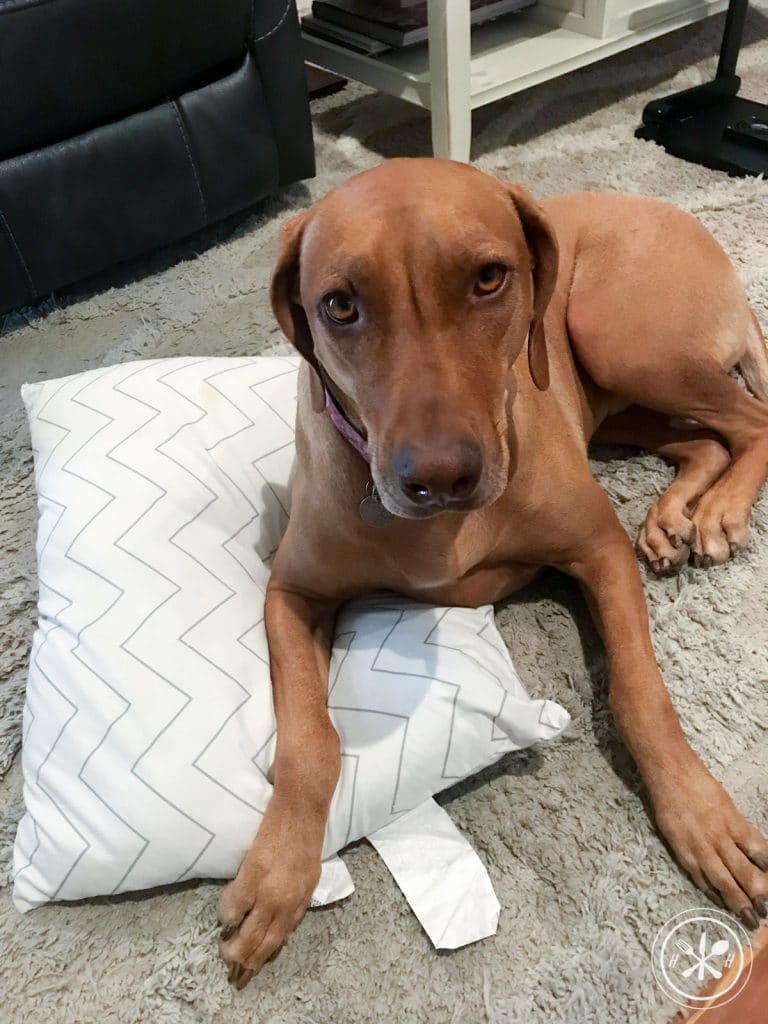 Nala mostly left babies stuff alone last week.  Although if I leave a blanket on the couch or the boppy/breastfeeding support pillow on the floor next to the recliner, she likes to lay right on top of it.  She’s not the only one either, and Missy jumped in on this fun as well.

The one super naughty thing Nala did this week was someone she got the stuffed giraffe out of the nursery and guess where she took it???? Guess where we found it???? IN THE LITTER BOX.  SHE TOOK AND DUMPED IT IN THE LITTERBOX.  I laughed so hard I cried.  (PS I’m pretty sure Missy didn’t do it because the giraffe is the same size as her, I’ve never seen her grab something that big.)

I’ve enjoyed going on walks, lots and lots of walks.  KJ doesn’t always love the stroller, but he is getting more used to it. 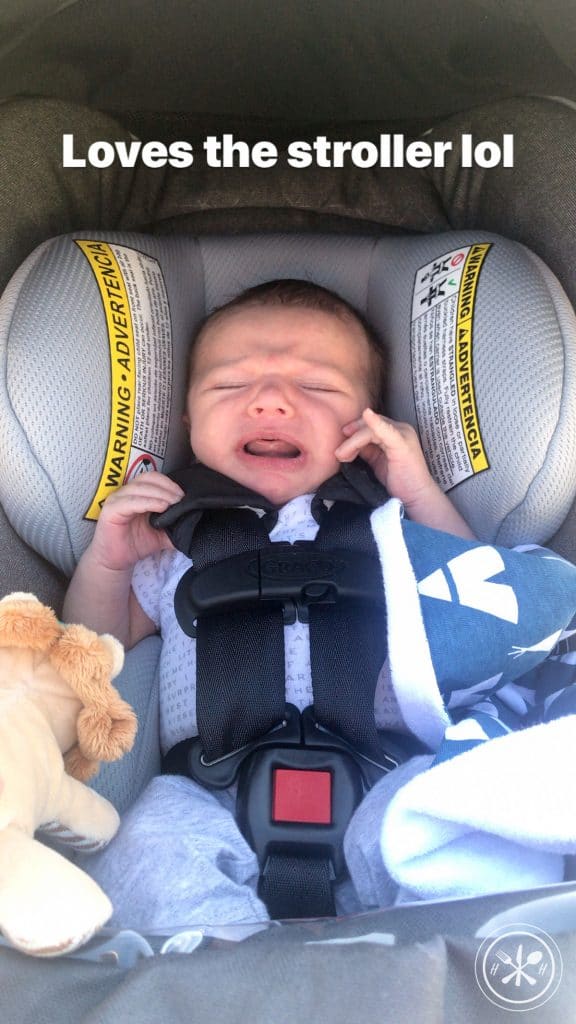 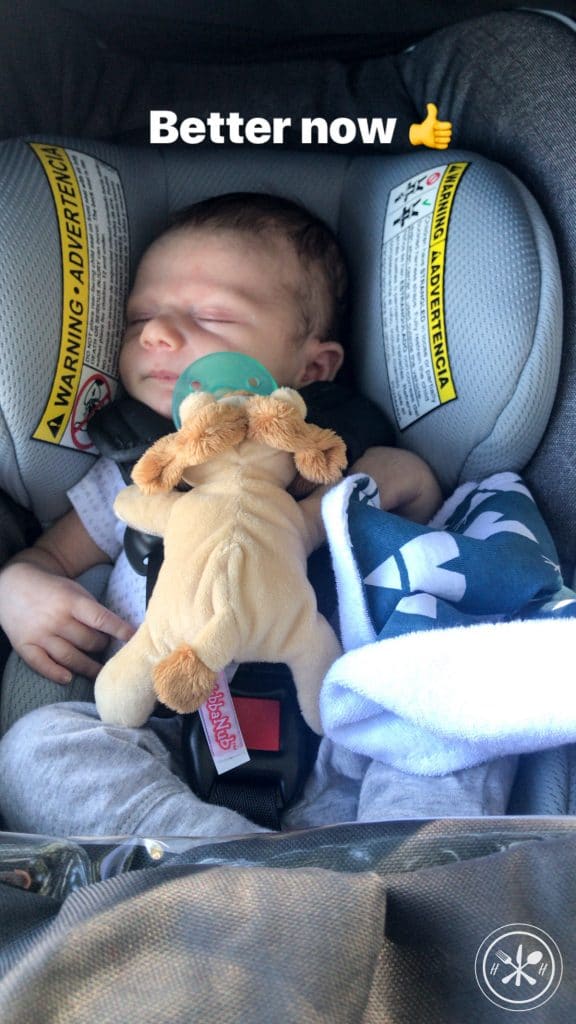 The last couple of walks I developed side cramps while walking, so that made me feel super out of shape.  I’m guessing it’s probably time for me to visit the chiropractor but I’ve honestly been putting that off. We will see how this week goes and I might schedule for next week.

We had newborn photos taken by a friend and awesome photographer which I plan to share soon!