Happy Wednesday Friends!  I had plans to do a little yesterday and morning recap today, but I left the photos from yesterday in my memory card at home and I’m working from Starbucks.  Why am I working from Starbucks?  Well if you caught my IG stories in the last 24 hours you saw the demon hiding in my closet.  In case you miss it let me show you:

I’ve lived 26 years in Arizona (2 years in California for Grad School) and never saw a scorpion till we moved to Gilbert.  For you Arizonians, I grew up in Phoenix, went to college in Tucson and moved to Ahwatukee after Grad School. Fun fact we lived on a reserve in Ahwatukee and saw coyotes as well as packs of javelinas, but no scorpions. Thank God we are moving, I don’t feel like being assaulted while I’m trying to grab a shirt.  Assaulted half naked, PERFECT.  To be clear, I wasn’t stung, but it still feels icky.

Needless to say, I have the best husband in the world.  He probably thought someone died because I could barely spit out the word scorpion in between sobs.  Immediately, he said, okay, I’ll be right there.  Luckily, it wasn’t integration week where he can’t leave and works a ton.   In Arizona, we don’t have hurricanes, tornados, blizzards (not in Phoenix) or anything else to worry about.  When it Monsoons, it isn’t that big of a deal unless you are on the I-10 trying to commute between Tucson and Phoenix (then it’s a HUGE deal).  Anyways, Mr. Hungry keeps telling me it’s like a ground wasp, but last I checked I’ve never had to deal with a wasp hanging out in my closet.  (insert many cuss words into that sentence.)  To be fair we RARELY have them compared to many people in Gilbert.  Some people find them daily, we find them like twice a year at most so I’m really making a mountain out of a molehill, but still.  Also, we haven’t kept up with spraying because we know we are moving so we’ve not wanted to spend money on it.  Since we still have to live there for a while, my husband called the pest control on his way back to the office. Let’s backtrack though before I found the demon in my closet I had a decent morning.

I woke up early to get a run in, I ran about two miles, dropped Nala off and did another two miles.  Pace – slow as hell because it’s hot as hell.  In the summer I’ve decided to run by heart rate 170-180 and no higher which slows me down a bunch but also keeps me from hating running when it’s so freaking hot out.  My favorite hat ever that I got for 1 dollar at Target! 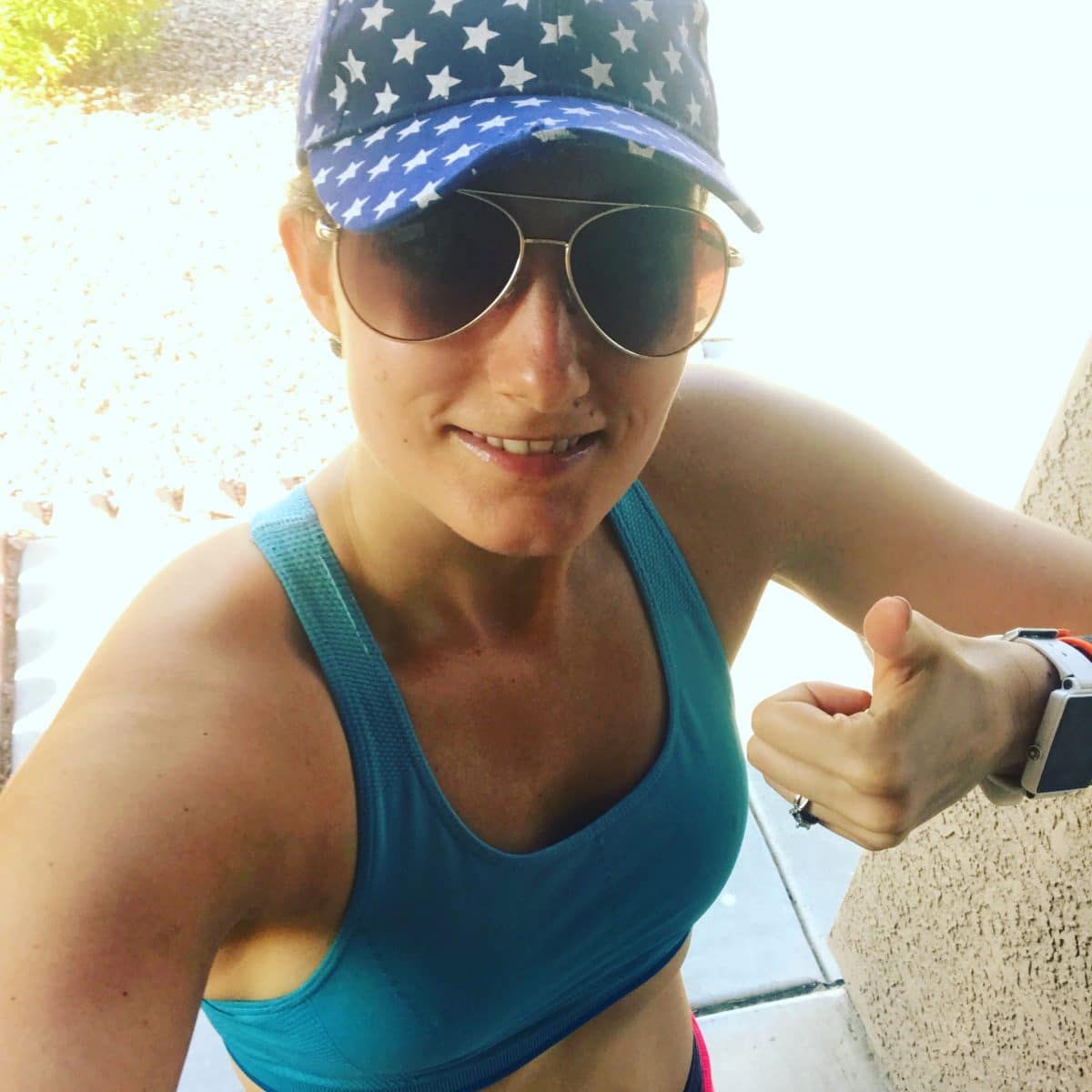 Then I foam rolled, I’ve been really religious about foam rolling my quads recently which has helped with some knee tightness.  (Check out my how to foam roll video I made a while ago for tips!) and made my favorite green smoothie:

It’s post workout so it doesn’t have any healthy fat in it, but I’ll get that in at my first snack.  If you are looking for tips on how to make your smoothie more filling check out these tips!

Then I showered and was assaulted by a demon in the closet while I tried to get dressed.  Now I’m working from Starbucks, I packed hummus, celery, and deli meat so I should be set for a while. Alright time to get some work done! Tell me friends, what critters freak you out the most?  I thought mine was cockroaches but that’s becasue I never had to deal with scorpions till now…