Lately, I’ve been in a meal planning rut.  In my effort to “cook once, eat many times” I end up getting lazy and making the same thing for us to eat all week.  It can get pretty ruthless when you open up the fridge and you know you’ve got the same chicken or fish dish you’ve had three days in a row.  So when Allison, Registered Dietitian and owner of Prep Dish, mentioned trying her Gluten Free and Paleo meal planning service I was all for it! 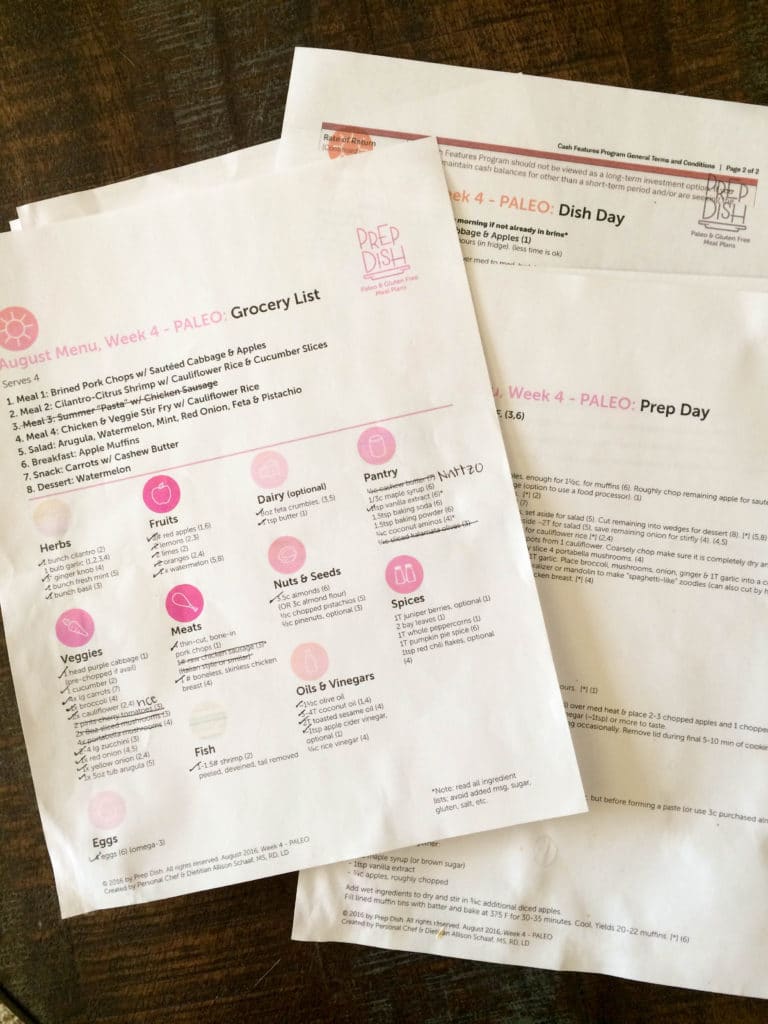 Her meal plan, grocery lists, and instructions are beautifully designed. This photo does not do them justice, my printer was running low on ink.  Typically everything is color coded and the recipe ingredients correspond with the recipe number.  I really appreciated how the grocery list was laid out in an easy to follow format.  It made it quite easy to substitute certain ingredients for those I already had on hand.  For example, the suggested snack was cashew butter and carrots.  Since we had a Costco jar of Nutzo, I swapped that for the cashew butter.

Even though we aren’t strictly Paleo, Mr. Hungry does best without gluten and dairy, so we end up eating Paleoesque most of the time (we still eat rice, oats, and quinoa).  Therefore, as you can see, I opted to try the Paleo meal plan.  The meals serve four so I figured I would make them all and freeze leftovers.  In reality, it was kind of a crazy week, we ended up making two of the recipes during the week and one on the weekend. 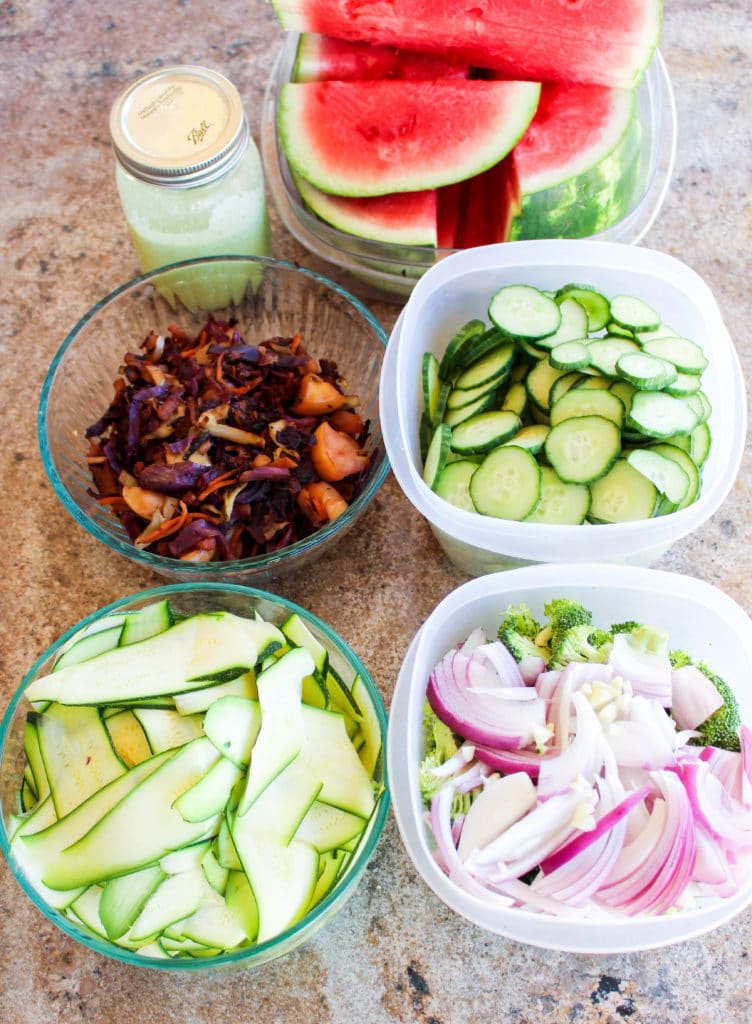 The meal prep took me a little bit longer than I usually spend, about 2.5 hours.  They say most of the meals plans can be made in under 2 hours and she adds a bonus “fast” meal plan every month that takes under an hour!

On Sunday I was a little overwhelmed with the process.  That all changed quickly when we had one of the craziest weeks ever.  I landed two TV segments, one in Tucson and one in Phoenix.  There was a ton of prep work that had to be done and things got really busy, really fast.  So busy, in fact, that we would have had toast and peanut butter or canned tuna for every meal if it wasn’t for all the meals that were prepped and ready to go.  It was truly amazing.  These cinnamon apple breakfast muffins were a lifesaver. If you’ve been following along on snapchat (hungryhobbyrd) you saw I actually took them with me on the 1.5-hour drive to Tucson. 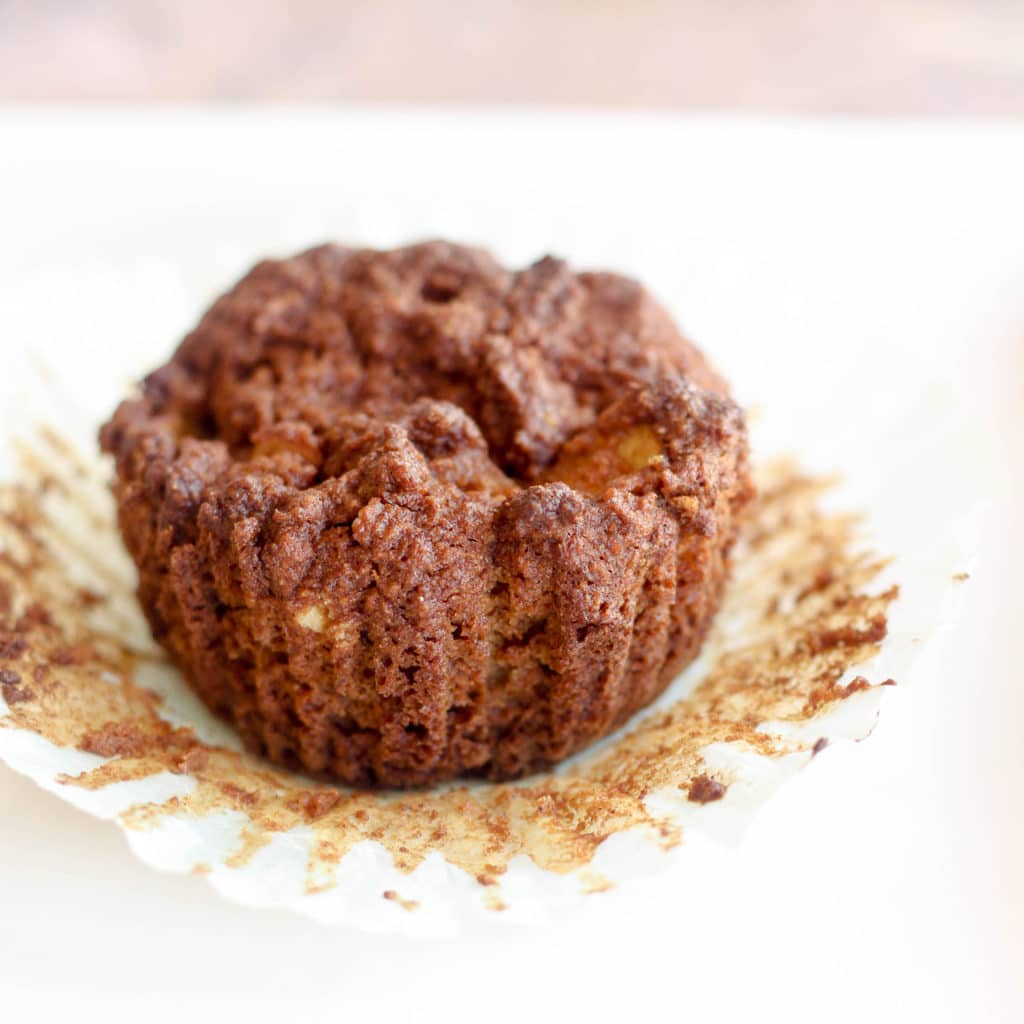 Lunches were easy, Mr. Hungry had chicken salad with feta and onion (he doesn’t like fruit in his salad.)  I had the salad as suggested without the red onions.  I either had a greek yogurt or dinner leftovers for protein, it was PERFECT.  Every time I grabbed one out of the fridge and took a bite that sent my taste buds bursting alive, I was so thankful for that 2.5 hours on Sunday.  The combination of mint, arugula, and watermelon was incredible.  Especially since my salads usually consist of vegetables, lunch meat, and mustard. 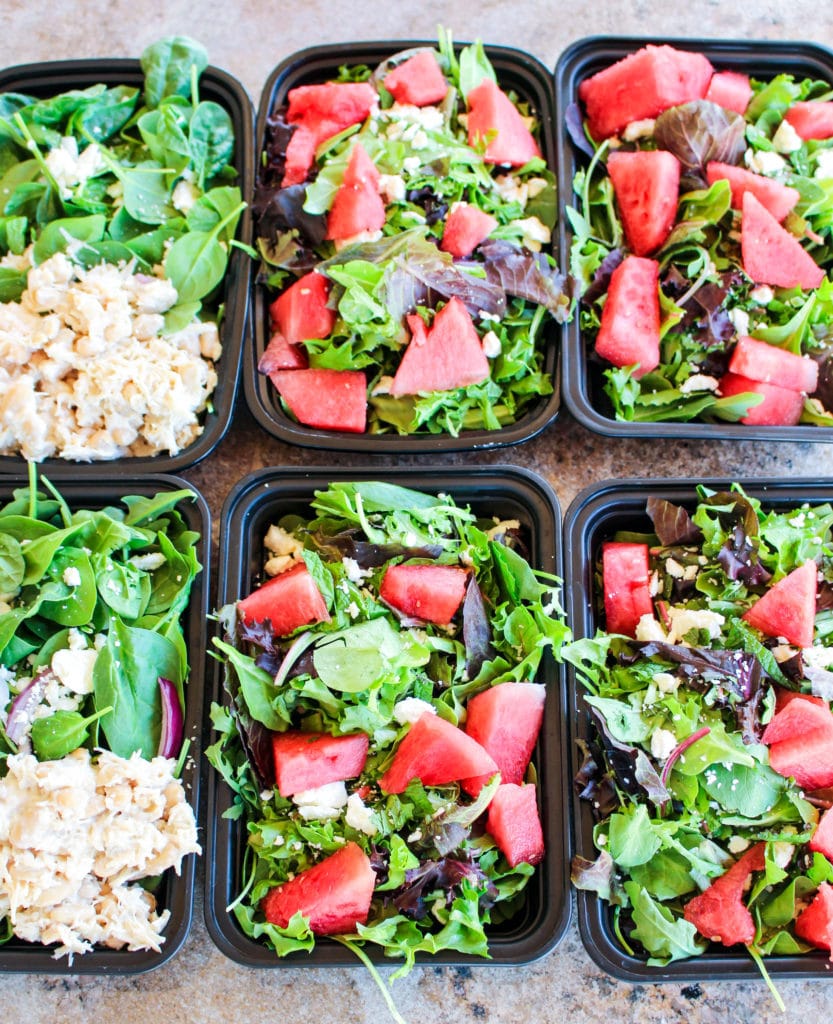 I usually do all the cooking in the house, but one of the nights Mr. Hungry followed the Prep Dish directions and finished dinner for us!  We both appreciated how quickly and easily the dinners came together on a night where cereal, yogurt, or canned chili were the feasible options.  I also loved how because the meals seemed so elegant, we made it a point to sit down and eat them together (even with the crazy schedules).

Our favorite dinner was the bone in pork chop.  I loved that I actually learned a brand new cooking technique, I had never made a brine before!  Also, because it was very different from the things I typically make and tasted delicious. 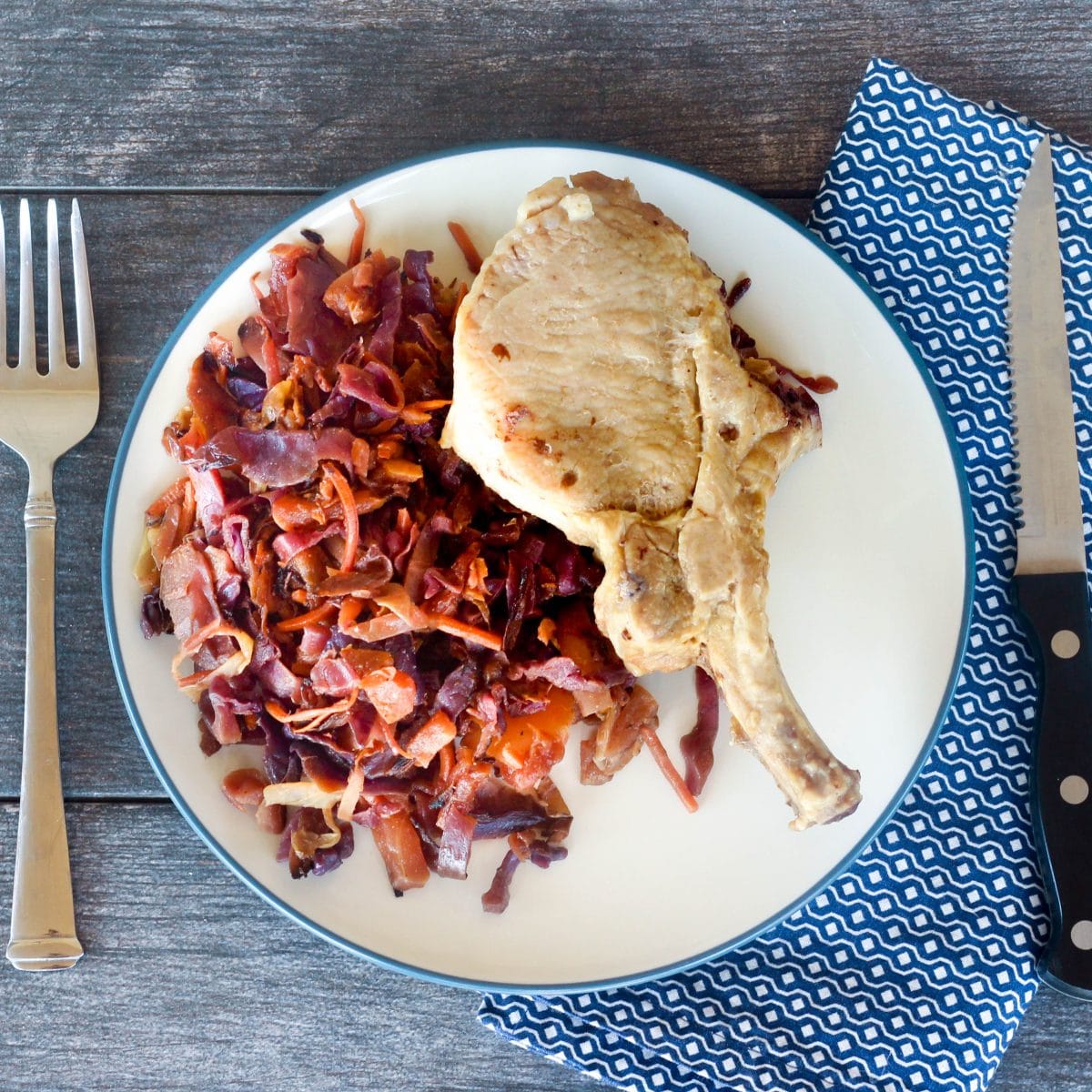 Overall I loved that the meal plans brought a pop of unexpected delicious flavor and a great deal of variety to our week.  I also noticed that the Paleo meal plan contained feta, most Paleo plans don’t contain dairy, even from goat’s milk.  However, feta happens to be a cheese Mr. Hungry tolerates very well so it wasn’t a problem for us.  It also wasn’t a key ingredient, so could have easily been left out of the meal plan.  My only other criticism was that I ended up spending more on groceries than I typically do.  However, I think that might be because the plans were intended for four people and we usually buy for two.  The way I made it, the meal plan actually lasted us about 1.5 weeks worth of food.  If you look at it that way, it really wasn’t more than I usually spend.  I also think the increase in variety decreased my typical bulk purchases.

I loved that because of the meal prep we ate nutrient dense “real food” dinners all week, even when our schedules got super hectic.  I really appreciated the portability of breakfast and how it doubled as a delicious snack.  I found the directions to be clear, concise and easily adaptable.  Even though I was initially overwhelmed with the 2.5 hour meal prep.  Later on, that 2.5 hours became worth its weight in gold.  A true example of how 2 hours is worth 20 when it comes to sticking with a healthy lifestyle.

Allison is graciously offering Hungry Hobby readers a TWO WEEK FREE TRIAL!  Use this link to sign up for your free two weeks.  I really believe that if you take a look at the meal plans and give one a try you will love it as much as we did!

Linking up today for WIAW!