Hello, Friends! I’m checking in with another preggo update!  Overall, it feels kind of weird to type these posts up, because it feels like a lot of complaining which is not my intention.  I’m so grateful that overall this pregnancy has been 1000 billion times easier than my previous pregnancy.  Also, I’m grateful to have a healthy baby hanging out with me, growing big and strong! That being said, with pregnancy comes the beauty of growing a human being which comes with some symptoms.  Some fun, some not so fun, it is what it is, and it’s different for everyone and every pregnancy!  So I’m sharing my experience so far today.

PS As always, if your experiencing or have experienced infertility, loss, or for any reason these posts are too hard to read.  Please skip them and come back whenever you are ready, or to other posts like recipes.  Take all the time you need, HH will be ready when you are ready to come back. My heart and prayers are with you! 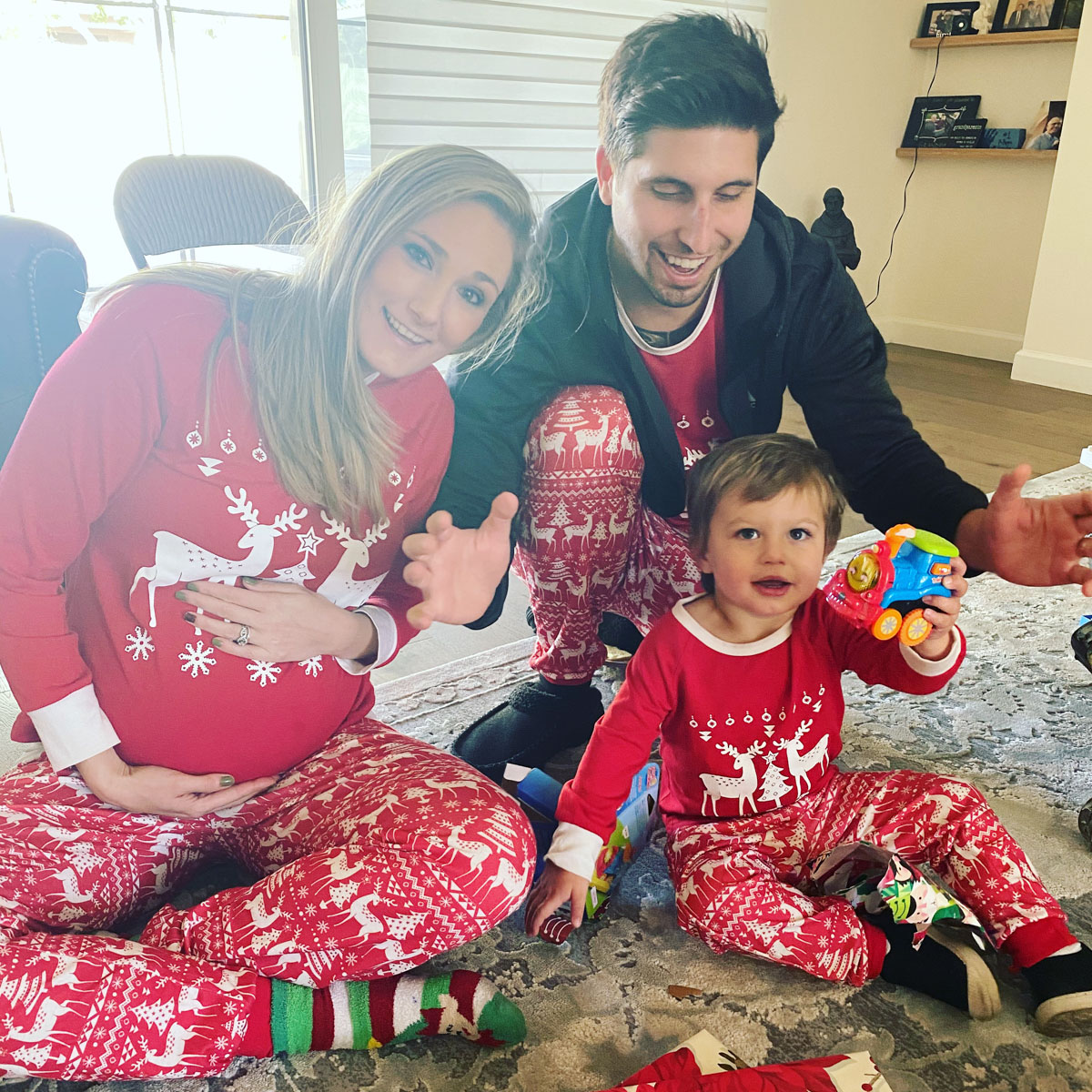 Like any holiday week with children involved, this week was busy, and so I didn’t feel the baby move as much this week.  Several times I had to stop and sit to make sure he was still wiggling around in there.  I had great energy, though, so I was super thankful for that!

The only pregnancy-related thing that happened this week was I rolled my ankle for the second time and went all the way to the ground.  So, I have this week’s ankle from an old high school cheer injury and I sprained it at 9 weeks running when pregnant with KJ. I remember it being weak and slightly rolling it from time to time, but this time the relaxin must be in FULL force because I’ve rolled it twice causing me to hit the ground each time.  (I manage to roll to my side each time protecting my belly and annihilating my hip, but obviously  not great.)

(In typing this I realized I should probably order an ankle brace, so I just did that.  Hopefully, it helps!)

I started to feel some Braxton hicks this week, but they went away, and I haven’t felt them since.  Baby is a lot more active now, and I regularly feel him grooving and moving.  Towards the end of the week, beginning of week 22, I started having issues with my left calf and shin.
I had these issues with KJ too (and when I used to train for half marathons), but, man, oh man, they got bad quick.  It starts as achy calf pain, then after some stretching and PT exercises, it moves to around my ankle and then settles on my shin as a shin splint.  It gets worse throughout the day, so by the time night rolls around, I have to alternate ice and heat, plus usually take Tylenol, or I can’t sleep.  I took a full week off exercise, and I’ve managed to keep the pain at bay with just a few minutes of stretching each morning.  Thank goodness because that was not fun!
Flashback Fun: Weeks 20 & 21 Pregnancy Update with KJ

This week I went in AGAIN for yet another oral surgery.  My “little friend” or pyogenic granuloma had gotten so big behind my tooth it was causing me to lisp. (Imagine a blood blister type thing, but big.) It was starting to get big enough in the front again that people would ask me if I had something in my teeth again.

I thought it might have been my fault because I really didn’t take that great of care it when it was removed last time. (I was just so happy to eat normally again!) So this time, I was incredibly diligent about eating only soft foods and doing lots of saltwater rinses.  It seemed to be healing better for about a week and a half, but now I can feel the beginnings of it puffing up again (week 24.)  My dentist is adamant that the safest route is to remove it each time it becomes uncomfortable.

He doesn’t think the risk to the baby of using antibiotics or corticosteroids to prevent regrowth is worth the benefit to me when it could be managed with minimally invasive removal.  (And no, he isn’t saying that to get more business, he didn’t even charge me for the second removal or surgery. And has said he won’t charge me because this isn’t my fault, and there isn’t anything I can do other than brush, floss, etc.)

It’s such a weird thing because I’ve never known anyone that had this before, so it’s super hard to explain.  Also, it was SO NOT this aggressive with KJ. Still, I also continually remind myself that of all pregnancy complications, this is annoying but minor and will go away after giving birth.  Does it make me pause a bit when thinking about a third baby that I was so sure of before? Uh, ya, definitely. 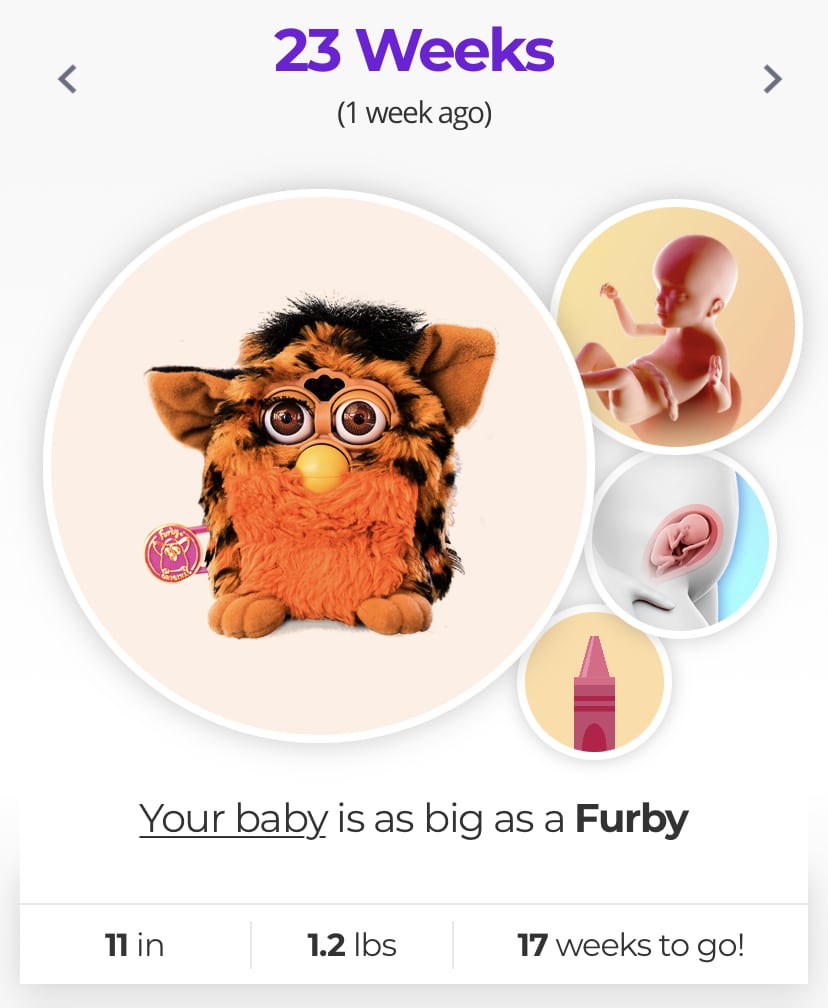 (I have my What to Expect Ap set to 90’s nostalgia for the size comparisons of the baby.  The Furby was just a little too spot-on to the coming newborn life stage.  Did your furby randomly turn on, make weird noises, and generally disturb you in the middle of the night?  Mine did and so did KJ when he was a newborn LOL)

Over the last few weeks, I noticed I’ve been leaning towards many citruses (grapefruit, oranges, lemon flavors), oatmeal, and pesto pasta as my favorite go-to foods.  I’ve also been trying to clean up my diet just a bit because I put on 8lbs in November and 8lbs in December.
When I sit back and think about it (hindsight is always 2020), my Mom was staying with us this holiday season, and she loved to make and buy treats, so there were definitely more extended treats available.  (Not blaming her, I shoved it down my piehole.) And trying to find and establish long-term child care was incredibly stressful from October – December, so I had a LOT going on.  Obviously, I was probably doing some emotional eating, not working out as much, and using the “pregnancy card” to go for whatever.  More on weight gain below!
That being said, I cleaned up my diet a bit.  I started being more consistent with my workouts (still listening to my body) and moved on with life.  The rest of the doctor’s appointment this week was brief, to say the least.  My OB’s office makes you see the PA for this week (if you aren’t high risk), and she could answer zero of my questions about alternative pain medicine, hospital procedures, or anything else.  But babies heartbeat was strong, so I’ll ask when I see my doctor again next appointment.
Flashback Fun: Weeks 22 & 23 Pregnancy Update with KJ 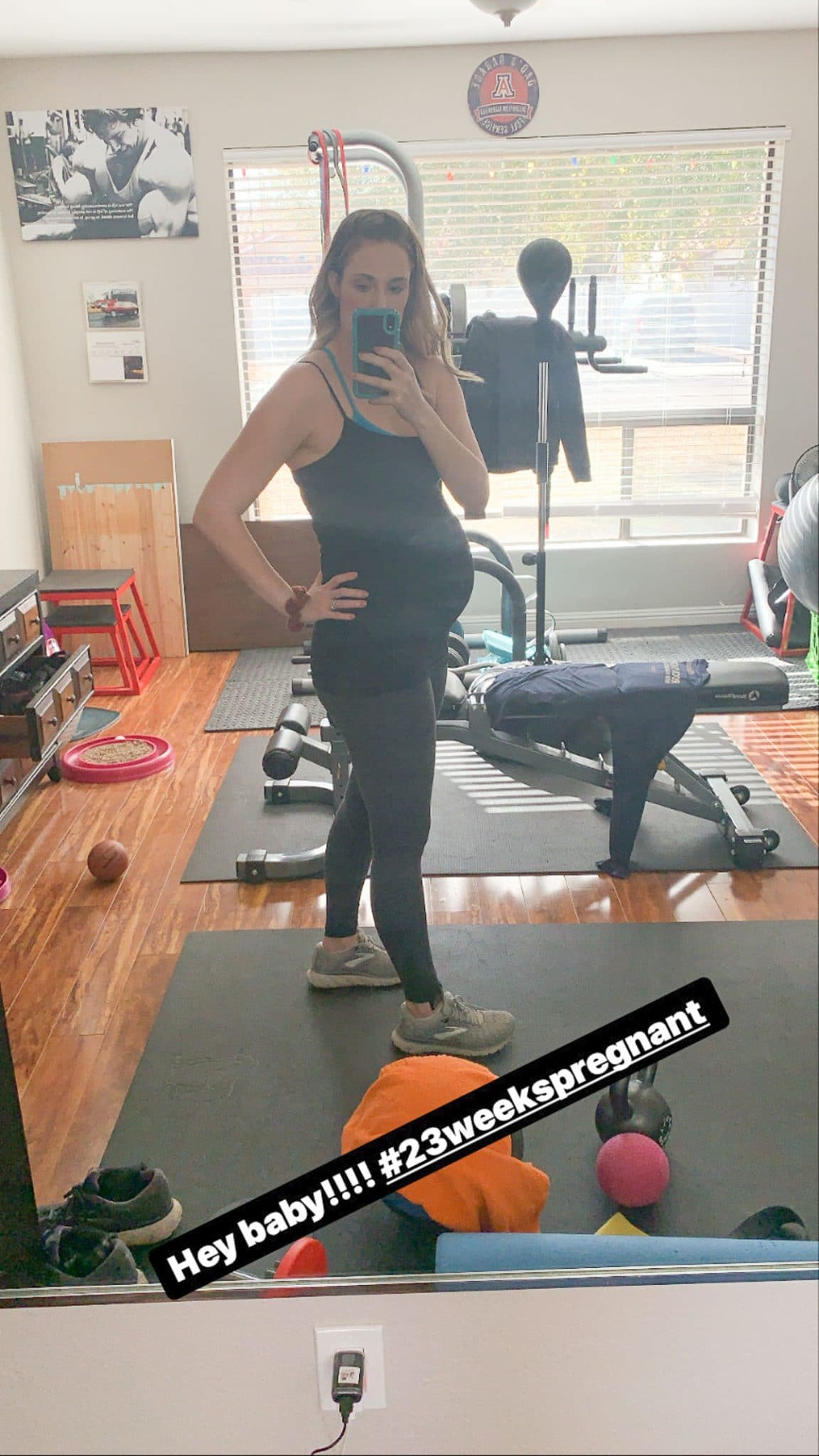 Here’s the thing, I was surprised by the weight gain, and I’m using it as feedback to make different choices from now on.  That being said, I’m not “worried” about it per se.  I felt that being pregnant with KJ and allowing my body to gain what it needed to was the last crucial piece to fixing my metabolism after years of damage.

Pregnancy was like the best reverse diet I had ever done in my life.  My metabolism was so much better after I had KJ (even after I stopped breastfeeding) than before. It took me 9-12 months to lose all of the weight, but it wasn’t a huge deal and came off mostly naturally and the last five pounds with tracking more diligently.  I remember how hard it was to find time to eat with just KJ as a newborn, and I can only imagine it will be harder this time.  The weight is there for a reason, to supply you and the baby energy when you need it.  Especially in those early months, I could easily skip a meal without feeling faint or passing out, or anything like that, I’m guessing because I had the energy reserves.

I’m not advocating to eat beyond your hunger and satiety cues OR to eat “for two.”  But, I’m advocating for women to listen to their bodies and not let the scale freak them out.  In my case, I think the scale was helpful because, in hindsight, I can see where I was ignoring my hunger cues and stress eating.  That being said, it doesn’t make me feel bad. It’s just feedback.  And maybe, with the more consistent childcare and fewer treats in the house, my weight gain would slow down without me telling it to anyway.  Who knows?

My point is, I’m often asked by my clients, “what calories and macros should I be at during pregnancy.”   I will calculate them for my clients, but only after “my speech.”  I do not encourage counting macros or calories during pregnancy.  This is the one chance you have to learn to trust your body and the one chance you have to fix years of damage to your metabolism. Take it! Take your chance to learn to eat intuitively, trust, monitor, and adjust but, don’t count calories.  I understand the fear of not “losing the baby weight.” Trust me. I had it with KJ too.  But, if you don’t trust your body and continue to monitor and give it a set amount of calories daily, it will react to that set calories, making it harder to lose weight in the long term.  So please, no calorie counting in pregnancy.

Furthermore, recent studies show that almost half of women gain more than the “recommended” guidelines state.  Some health professionals, such as Dietitians, midwives, and OBGYNs, have begun to question the recommendations.  Maybe it’s the recommendations that are off and not the women who gain more than the recommended?  We know that the risk of having a big baby (and associated complications such as c sections) goes up with “excess weight gain,” as does the risk of complications such as pre-eclampsia and GDM.  So, yes, we need to be aware, monitor and use some feedback.

Baby #2 was measuring large, 90th percentile when I went in a month ago.  So I’ll be diligent and make sure I go for the GDM screening etc.  But, KJ also measured large, but growth slowed down significantly at the end, and when he made his appearance a week late, he was 7lbs 14 ounces, so, pretty normal size even for being late and gaining more than the recommended.