Hi friends, it’s time for another pregnancy check-in! I wish I had some cute pictures of me and my bump, but all I’ve got are sweaty workout photos with IG captions still on them!  Oh, well! 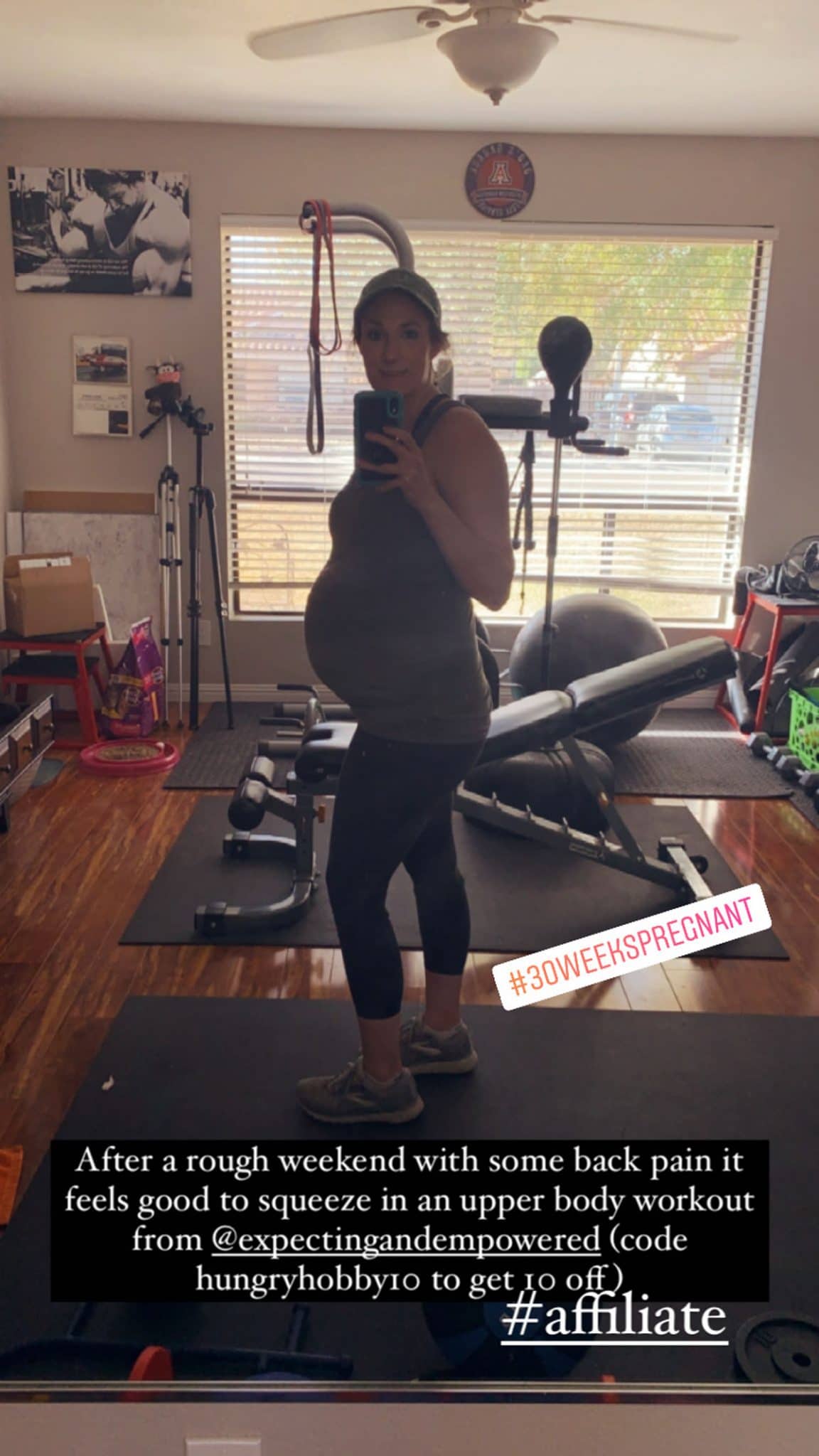 The big news this time around is that I haven’t had to get my gums lasered again, thank goodness!  (For those of you just tuning in, I have a pyogenic granuloma that’s incredibly persistent and stubborn. ) The last time I went in for the excision surgery, the dentist was really aggressive, and it hurt way worse than the previous two removals when the anesthetic wore off.  But then something magical happened, it stabilized.  I’ve been afraid to mention a word of it to anyone because I was afraid to jinx it, still am.  I won’t truly believe it’s gone or at least stable until after the baby is here.  Fingers crossed it stays stable, but even if it doesn’t, at least at this point, I’ve had one less surgical procedure (I had to remove it every 3-4 weeks or I couldn’t talk or eat. So, at this point, I’ve at least skipped one appointment on that “every month” or so schedule.)
Other than that, just been feeling large and in charge the last few weeks.  Let’s get into the week-by-week breakdown. 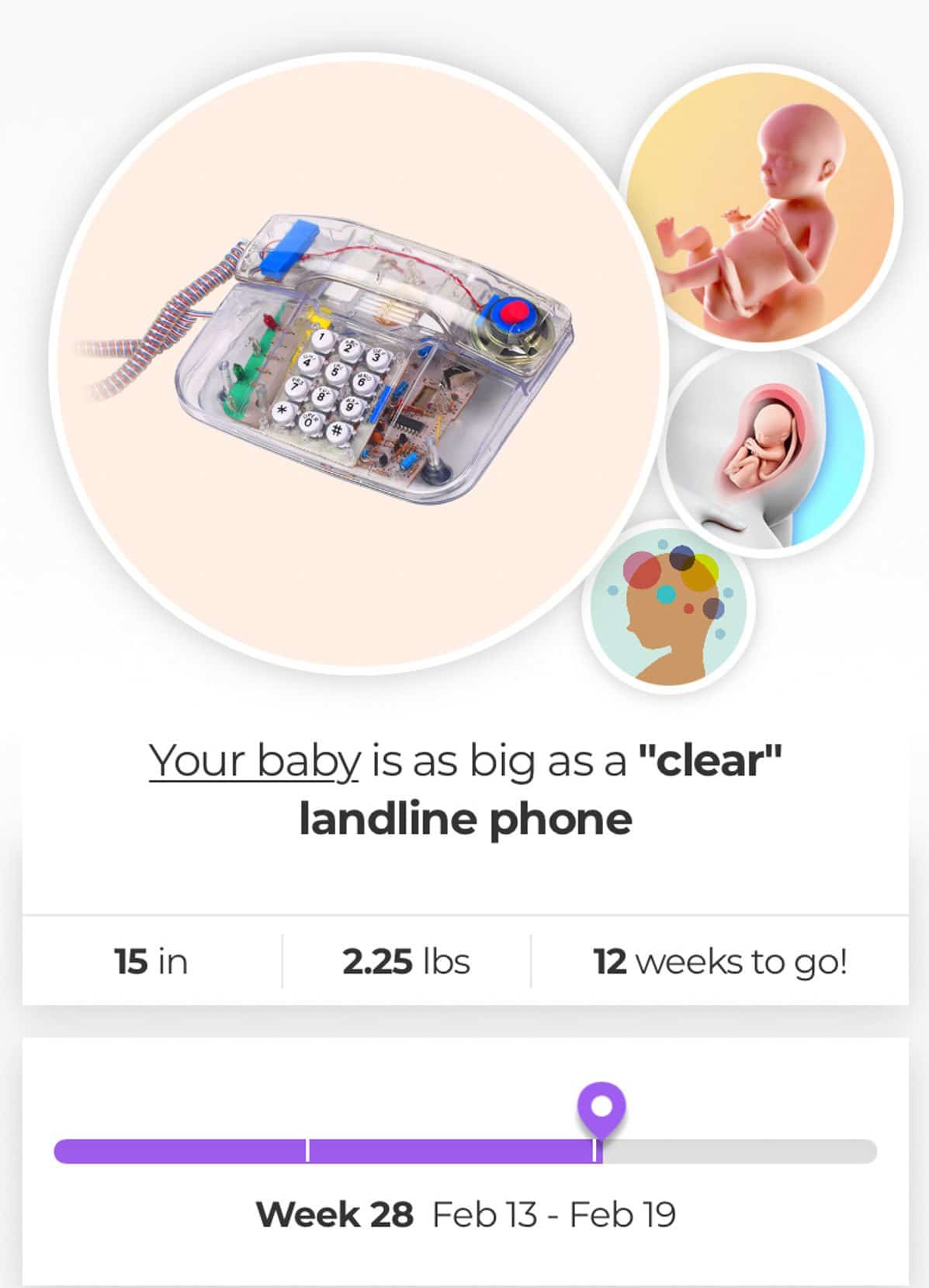 Baby is the size of a clear landline phone! About 15 inches and 2.2lbs!

This week sleep started to get more difficult, especially as the same rib pain I had with KJ began to get more intense.  I’ve been using this wedge pillow a lot, and it seems to help give me the support in my ribs my body needs.  This week was also all about learning and testing my limits now that I’m in the third trimester.  At this point, I was on “modified” bed rest with KJ and not walking or working out.  So, when I went on a walk in the evening that caused a ton of cramping, it was a big wake-up call for me to slow down and listen to my body.

I finally pulled the plug and bought a nursery chair!  Okay, so at first, I wanted a daybed in the nursery, but really, the room is way too small for that.  So then,  I decided I wanted a recliner chair as we have in our living room that reclines almost all the way so I could sleep on it if I had to.  As a second-time Mom, this time, I’m not thinking of when the baby gets here, “aka the newborn stage” all the time like I was with KJ.  Instead, I’m thinking of after KJ moved to his room and needed to be nursed at night.  Or, even though he was sleep trained, he’d get sick or have a tooth coming through, and I’d spend my time on the wooden rocking chair, which was normally pretty comfortable to me, but not from 1-3 AM when all I wanted to do was lay down.

So, all that being said, I wanted something I could really rest in during those tough nights from 6-12 months old.  Most nursery chairs I found didn’t have tall enough backs or reclined far enough for me to use them as I intended to use them.  Then, I stumbled on nursery chairs at Lazy Boy, and after visiting the store, I fell in love with the Jay Rocking Recliner. Unfortunately, my order won’t come in till the end of July, BUT, it’s all good because my intended use for it is from 5/6 months on. 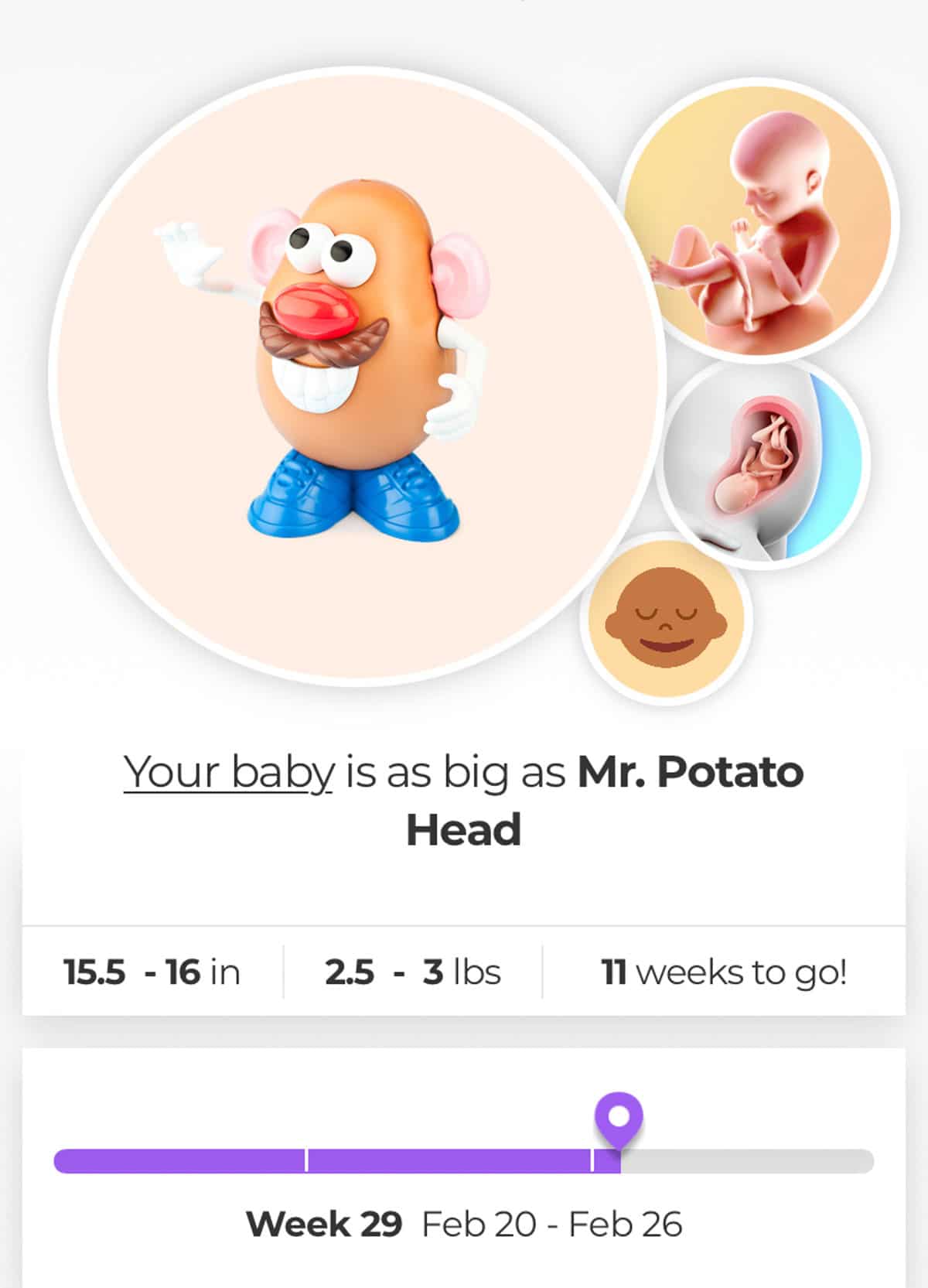 I felt mostly good this week and was super active shooting recipes and getting the house ready for an appraisal (refinancing requirement.)  I had a little heartburn and an upset stomach at the beginning of the week, but thankfully it calmed down.  My nesting game was STRONG.  I cleaned out all the kitchen cabinets and my blog cabinets. Getting rid of a giant box worth of stuff felt GREAT.

The major thing I experience this week which was SO different from KJ, was I started to have some massive anxiety (I guess that’s what you would call it.)  I initially blamed it on the house stuff, but when it kept going on despite the house stuff, I wasn’t sure what was going on.  It wasn’t like, oh, I’m so anxious and worried, it was like I could feel my heart pounding out of my chest, and it began impeding on my ability to work or function at all.  I couldn’t sleep. It was terrible.

I have experienced the same feeling three times in my life before, and I can remember every single one because the feeling is so pronounced.  Anyways, I tried sleeping more (couldn’t sleep), eating better, doing relaxation, working out (kind of helped), etc.  Finally, I started to decrease my caffeine consumption, and I immediately felt better.  I was only drinking one cup of coffee (8 ounces in Keurig).  But, in desperation, I reduced it down to 6 ounces regular and started to mix in some decaf.  The change was immediate. I could sleep again, which improved everything. 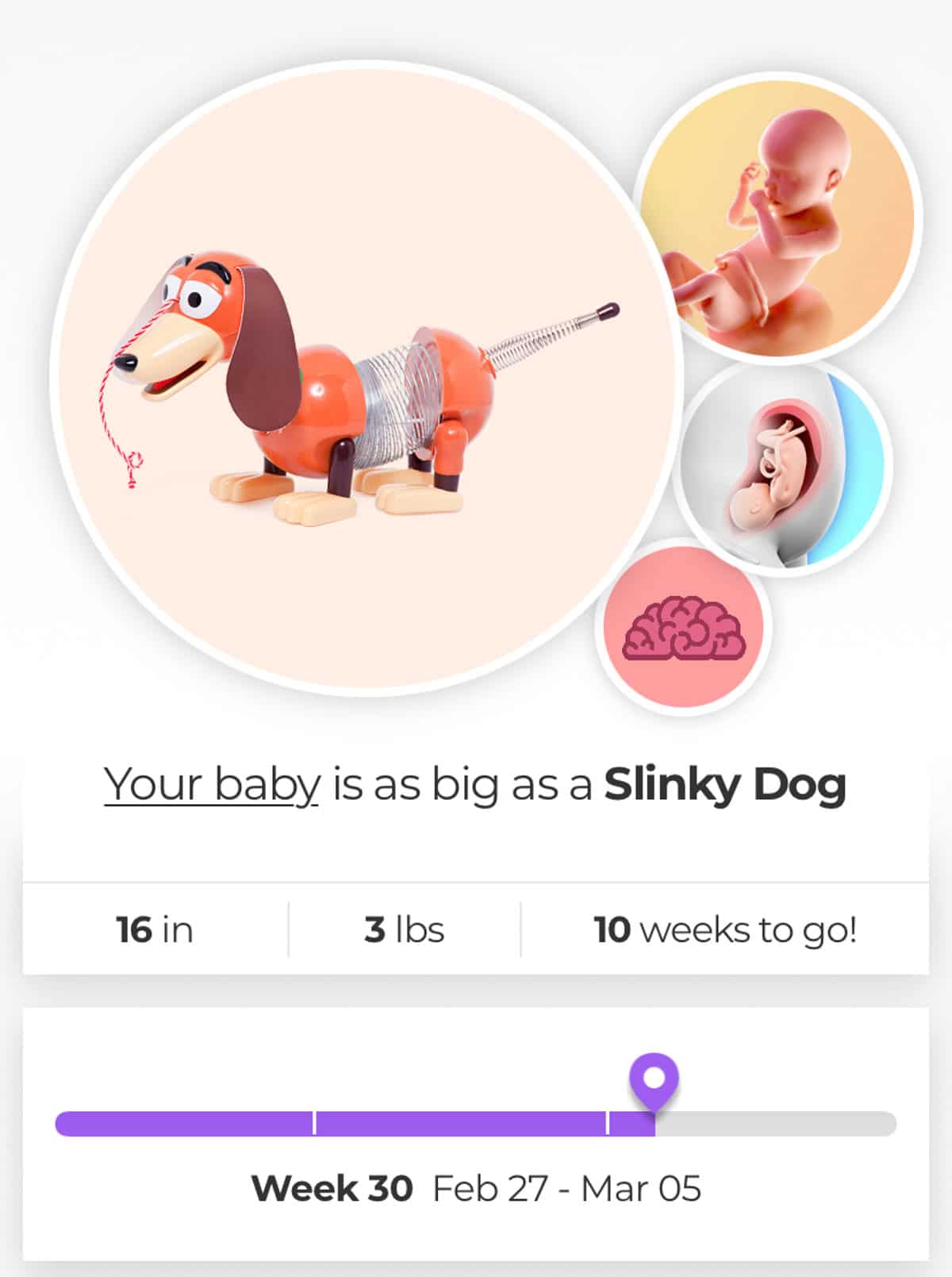 Baby is as big as a slinky dog! About 16 inches and 3lbs!

When the anxiety started rearing its ugly head again this week, I decreased my caffeine consumption to half decaf, half regular.  Immediately, it subsided again.  I guess I’m just super sensitive to caffeine this pregnancy?  Very strange to me.

So, as I said, with KJ, I was on modified bed rest which meant no standing for more than 2 hours at a time, etc.  Without that restriction this time, Mr. Hungry and I had been tackling things around the house, meal prepping, and I was shooting some recipes.  I started to experience some SUPER achy feet at the end of the day, like, whoa!  Other than that, I felt mostly good this week! 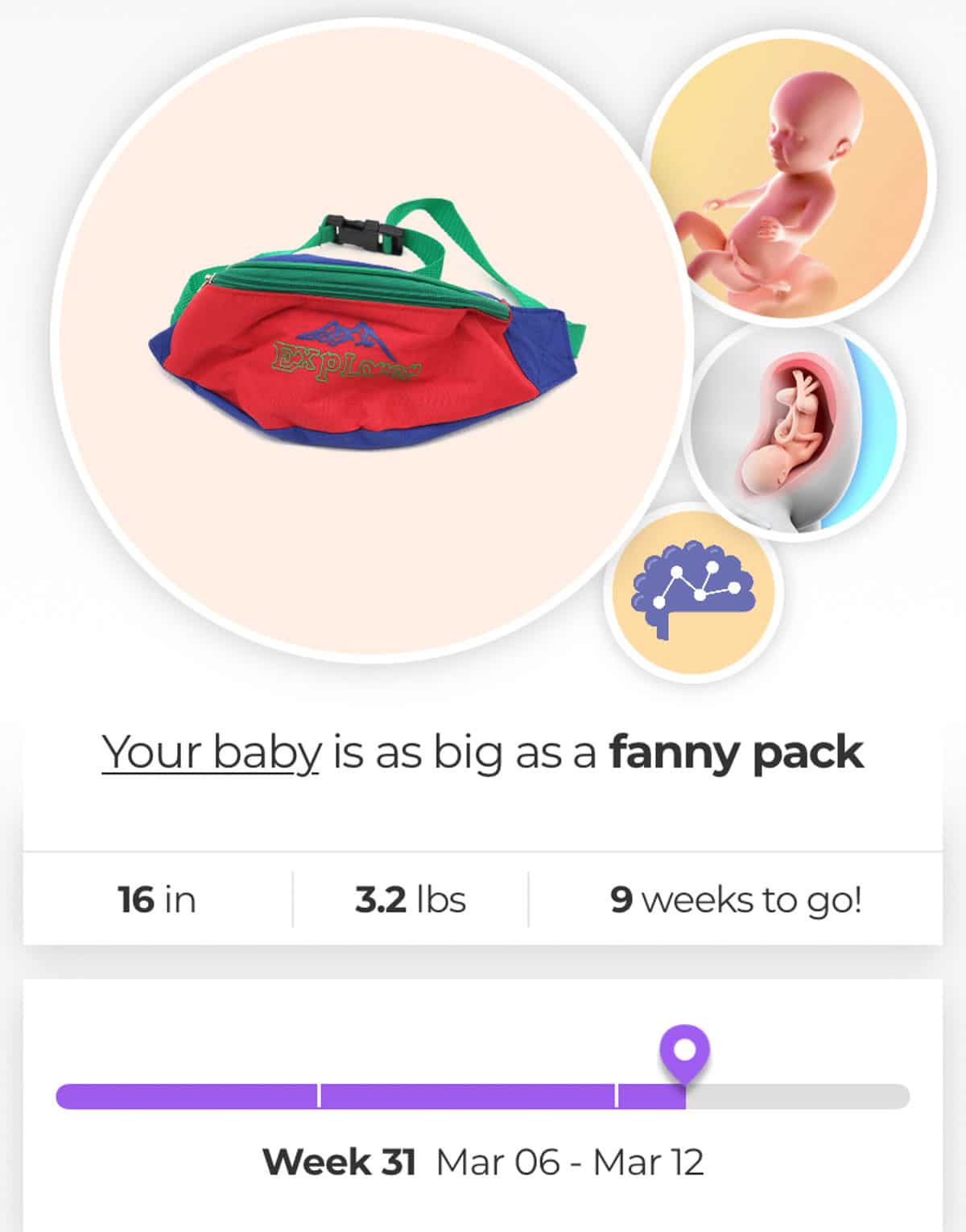 I had a doctor’s appointment early this week, which went well.  I met the other doctor in the practice who does 50% of the deliveries, so now I feel like I know and trust both doctors.  She took a lot of time to answer all my questions, didn’t seemed rushed, and was very supportive of my desire to avoid an epidural (and the related complications I experienced) this time around. I’d been having a lot of super-low pelvic pain, which she explained is due to the ligaments being previously stretched in a prior pregnancy. She said I could keep working out unless it makes it worse, so that was a relief. I’m so glad I feel 100% comfortable with both doctors in the practice. That’s a big relief!

Although I was feeling tired with super low motivation (adjusting to less caffeine? take being tired over feeling like my heart is going to pound out of my rib cage), I managed to wash all the baby clothes from 0 to 3 months!

I bought a couple of combo nursing and pumping bras.  I have a pumping bra, but you can’t nurse at the same time in it.  I have an appointment with a lactation consultant to discuss some of the struggles I had with KJ.  But, I also got a lot of advice on boosting milk supply by duel pumping/nursing right from the start to boost milk supply from a friend who learned from the NICU nurses a couple of months ago when her baby was born at 35 and half weeks. With KJ, I didn’t know what to expect and was afraid of creating an oversupply –> mastitis, etc.  This time, I’m not worried about creating an oversupply, given my low supply last time, more like establishing an adequate supply.

What else did I buy?

And since this post is clearly long enough, I’m out for the day! Have a wonderful week friends!