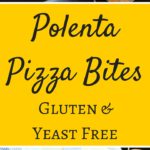 Hi, Friends! Wow, I know I say this every month, but where in the heck did January go?  That was FAST!  Next thing you know it will be Christmas again, one can only hope….

For now, it’s TGIF, and with the weekend in sight, I’ve got a quick, easy recipe for you that is perfect for game day!  Not only are these bite size morals delicious, but they are so easy to make they are quicker than bagel bites.

A New Ingredient for the New Year – Pick a new ingredient that you’ve been wanting to try… and cook or bake up a new recipe in the new year. Are you curious about nutritional yeast, fish sauce, matcha, teff – or maybe even ugli fruit? Show us how you’re cooking with something new (to you!) in 2016. 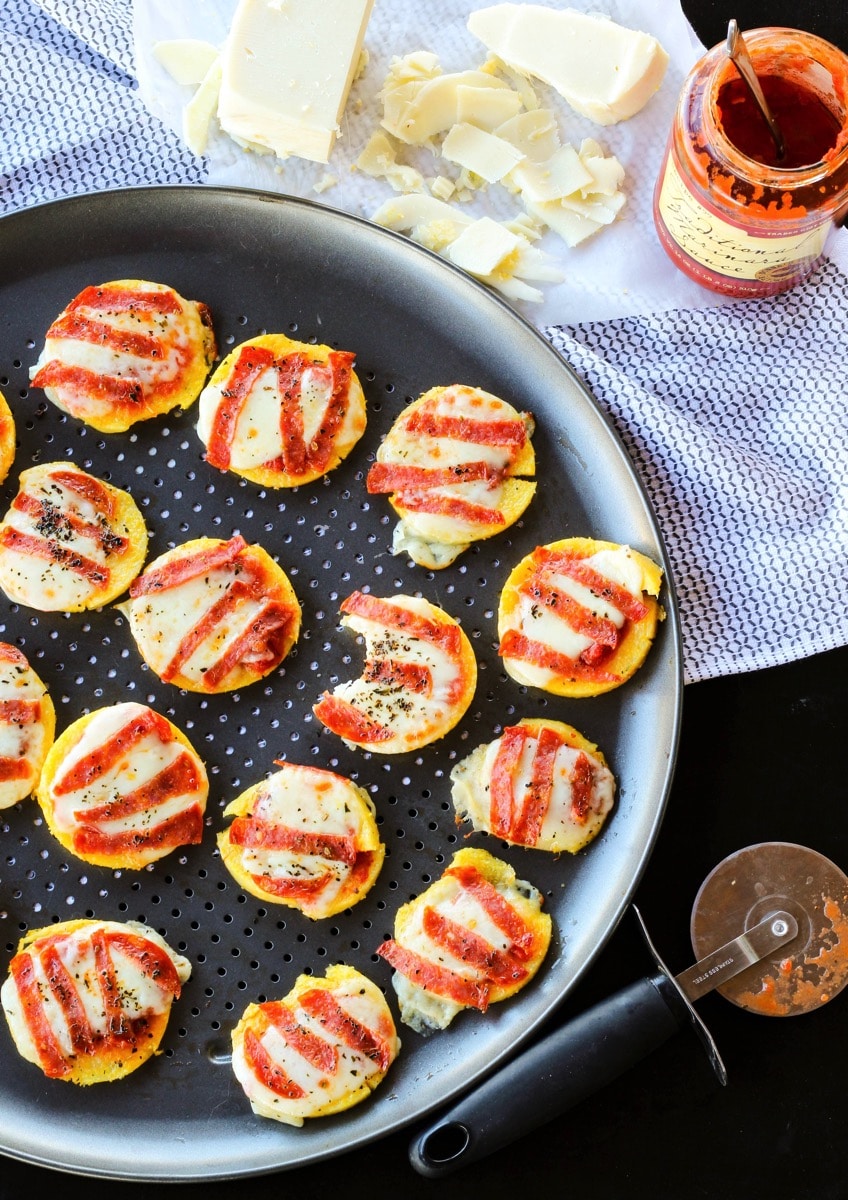 I’ve hadpolenta on my radar since we had polenta fries at one of our favorite local pizza spots!  I’d seen it at Trader Joe’s before and wondered, other than fries what I could use that little tube for?!?  I knew whatever I did would be good for Mr. Hungry since polenta is made from corn it’s naturally gluten free. 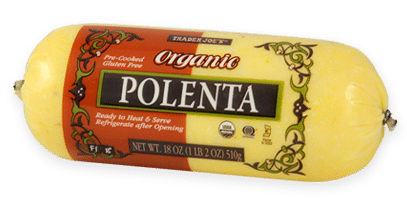 When Mr. Hungry asked for bagel bites for his game day feast, I immediately knew what I could use the polenta for!  I envisioned gooey melted cheese dripping over bite-size morsels savory enough he wouldn’t think twice about bagel bites again. Plus, the bites would be yeast free, another one of Mr. Hungry’s food enemies. Well, I got the melty cheese part right! 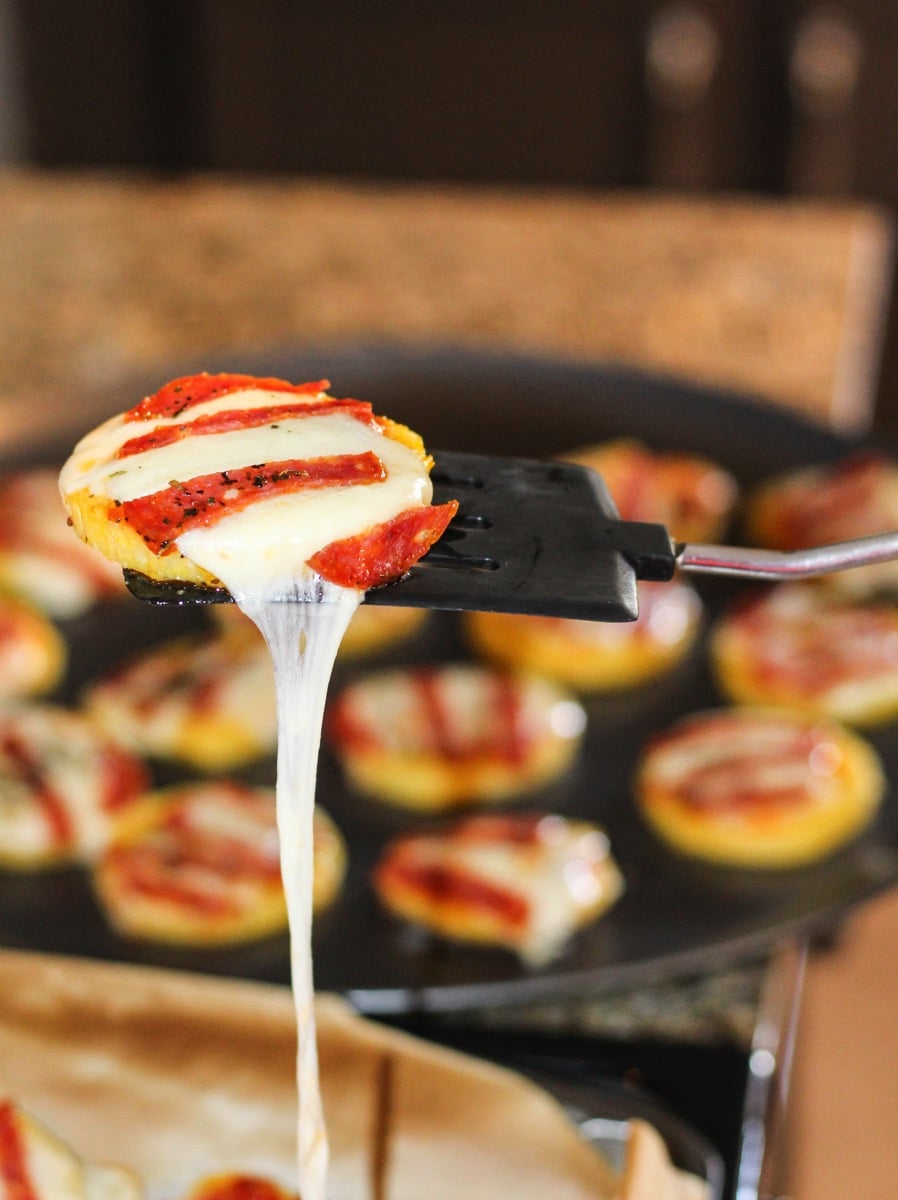 A quick google search revealed I wasn’t the only one that thought they would make a great mini pizza bite (I based my broiling process off of this recipe.) However, I knew for Mr. Hungry to believe it was pizza, it was going to have to have some pepperoni on it!  So I also picked up a pack ofnitrate-free pepperoni, yes there is such a thing!

I wanted them to taste AH-MAZING, so I splurged on a block of whole milk mozzarella, which I’ve never done before. I think buying the block made it easier because I just shaved off little pieces of mozzarella, instead of trying to sprinkle shreds on each one.

The pepperoni is another story, admittedly I wanted to stick a whole pepperoni on top and called it done, but that wasn’t very visually appealing.  So I cut them in strips, which turned out to be a fantastic idea because it made the pepperoni go a lot farther.  Each pepperoni covered two bites instead of one, but still provided all the 100% necessary pepperoni flavor and visual appeal! 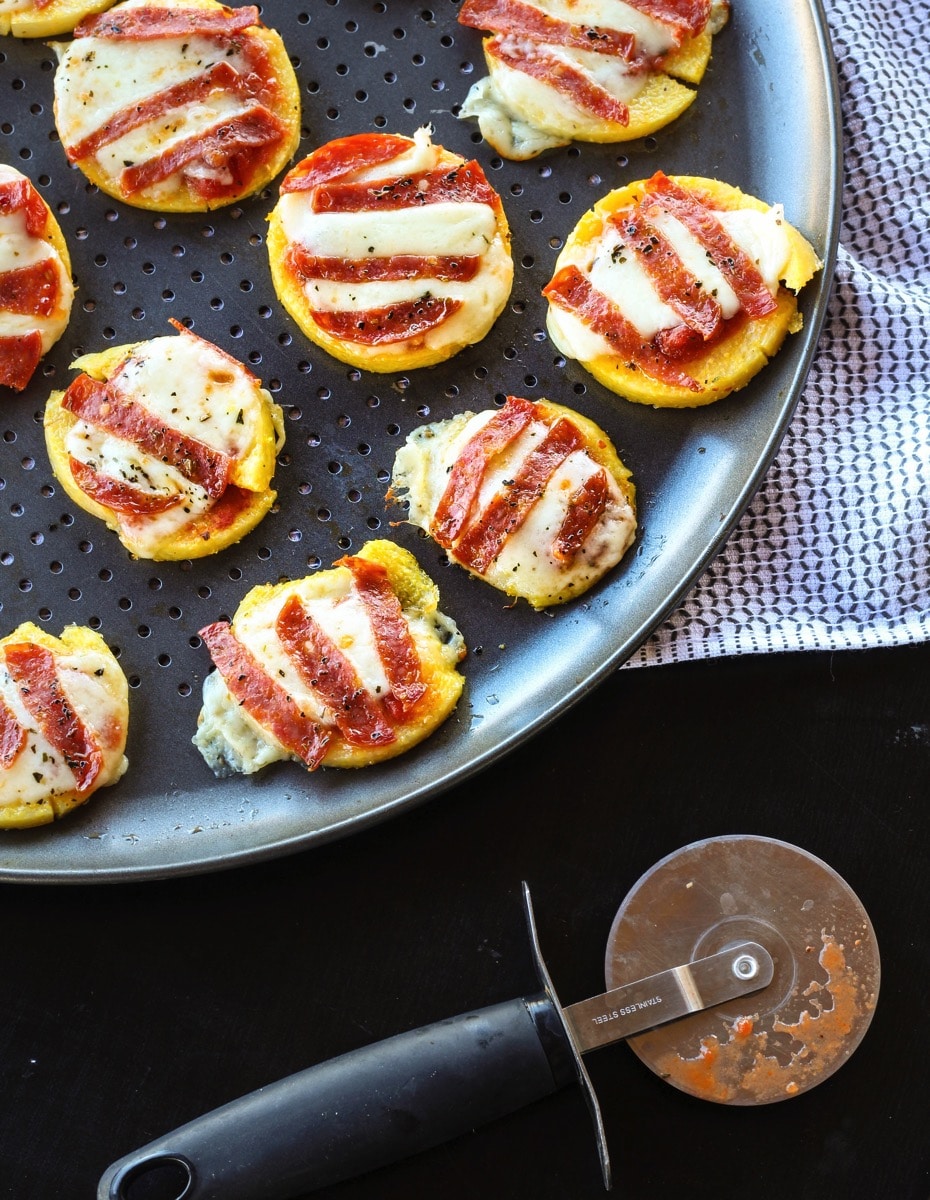 Print Recipe Save RecipeSaved!
4 from 2 votes

1.Most recipes recommend 1/2 inch slices because the polenta can easily break. I found as long as I was deliberate in my slicing (press straight down quickly with a large knife) I was able to get them a bit thinner than that and therefore able to make more bites from one tube!
2. Most recipe recommend 1-2 minutes but I wanted ours a bit crispier and firmer!
3. Be creative with your toppings and if you like spicy add some red pepper flakes!

Serving: 1g
Tried this recipe?I'd love to see what you made! Tag me @hungryhobbyRD or tag #hungryhobby if you try this recipe! 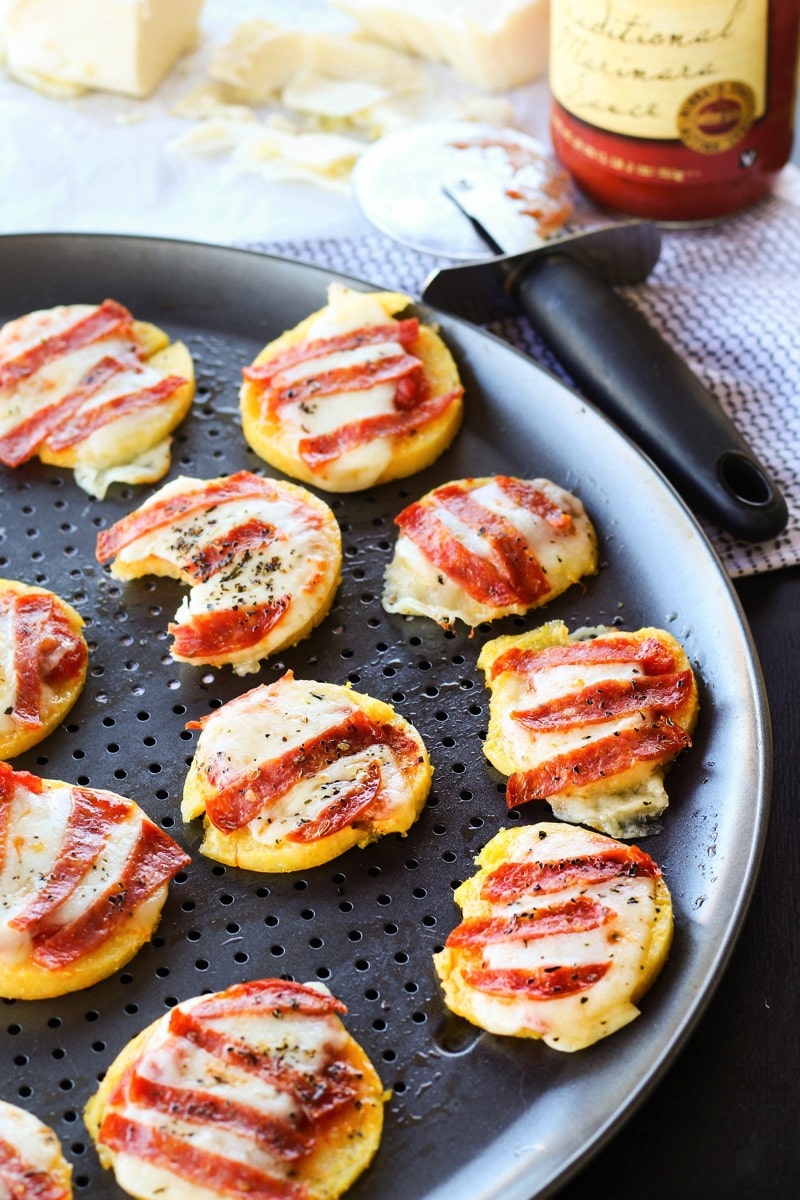 This shouldn’t even be a recipe; it was so super easy!  You can easily whip these bad boys up to impress any friends as an appetizer or part of your game day feast in 15 minutes or less.  Touchdown!

[Tweet “Pizza for #gameday is a must, these #glutenfree #pizza bites only take 15 minutes! #theRecipeReDux #appetizers #eatandtweet”]

Previous Post: « 10 Healthy Foods I’ve Added To My Diet & 10 I Havent
Next Post: How To Spot A Healthy Carbohydrate »