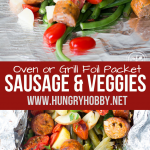 These Italian sausage and veggies foil packets can be made in the oven or on the grill for a mess-free healthy dinner in no time! 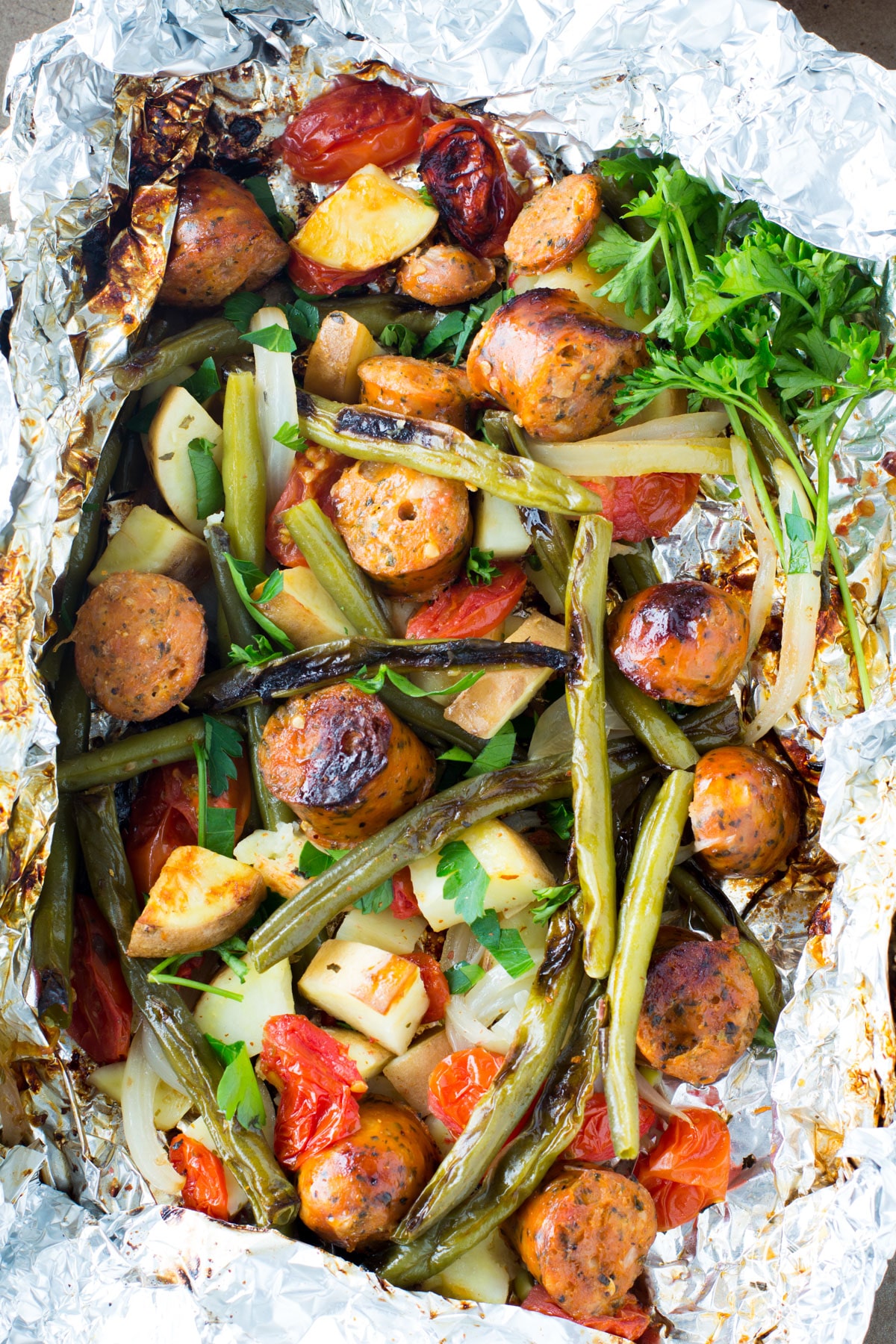 I’m late to the party on the whole trendy “foil packet dinner” thing on the grill.  I’ve been using foil packets in the oven for a long time, in fact, this recipe for Garlic Dill Baked Salmon with lemon herb butter was the only way I knew how to cook fish for probably ten years.  That’s how my Grandma did it, so that’s how I made fish.

As far as the grill goes, we randomly wrap up stuff and throw it on the grill all the time.  Usually, we do whatever veggies we are eating with whatever is on the grill, but I love the idea of cooking a whole meal in one packet. If you’ve been to Hungry Hobby before you know how I feel about dishes, washing them, putting them away, the whole thing.

If it wasn’t so bad for the environment I’d use plastic stuff all the time.  I’d rather take out the garbage seven hundred times than deal with dishes, but that would be expensive and make me a terrible person.  So, I opt for as many easy one pan recipes as possible, so foil packet recipes it is!

How to Make Foil Packets 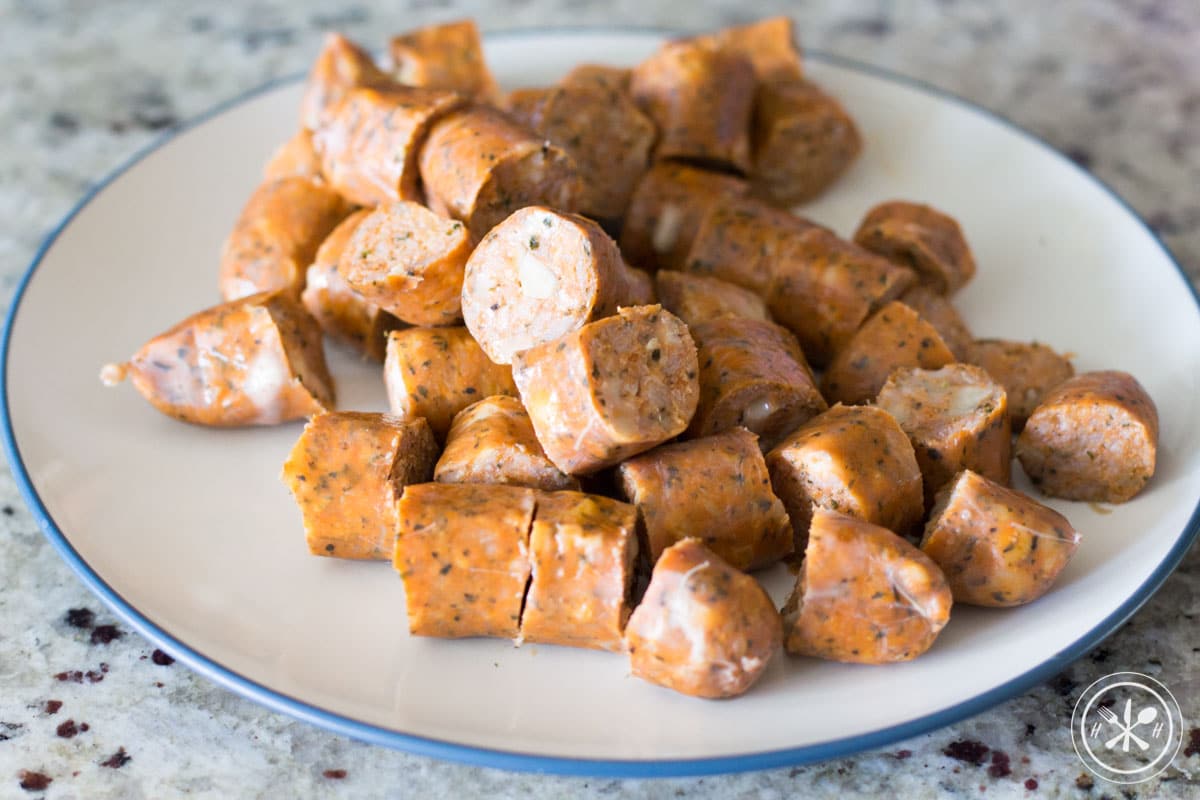 I used the artichoke mozzarella ones from Costco (Sabintinos brand), but you can use whatever you want that will go well with Italian seasoning (or change up the seasoning!)  Since I’ve been dairy free (for breastfeeding) I’ve enjoyed the Paleo Garlic & Basil sausages by the same company at Costco.

Cut up your veggies, you can use whatever veggies you want, but you will want to group veggies that take the same amount to cook.  For instance, I didn’t include zucchini because they cook up super fast while green beans and sweet potatoes take a while to get tender. 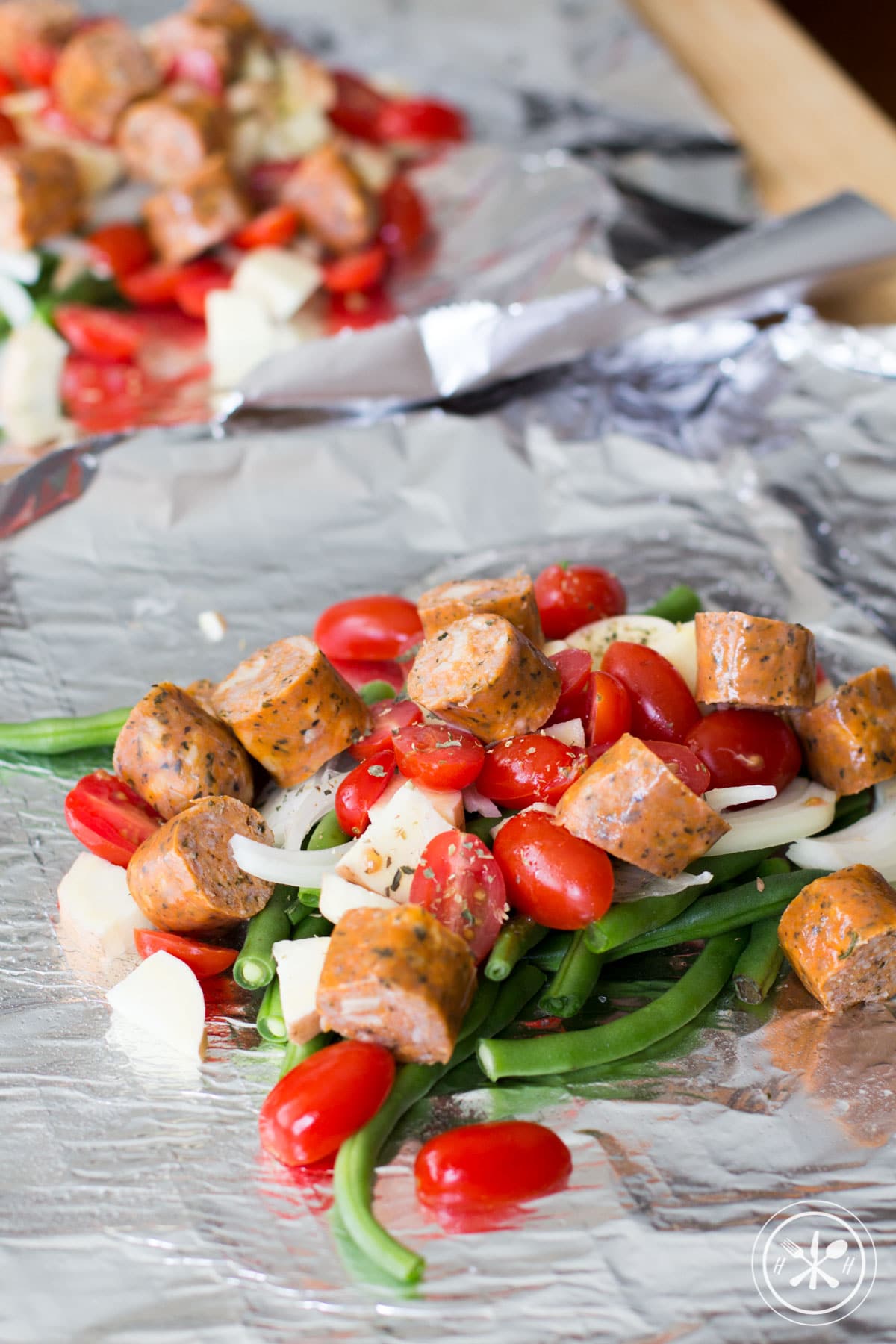 I wrote down the size of my sheets of foil for you, because there is nothing worse than not having a big enough sheet and then having to transfer all of it to another sheet.  Ain’t nobody got time for that.

My sheets were 17.5 by 17.5 inches (I used the giant heavy-duty aluminum foil from Costco)

Next, you’ll add your seasonings and maybe a little oil.  If you are using super lean chicken sausage without any cheese, then you’ll want to add oil (a teaspoon per packet should be plenty).  Since I knew these would have some drippings I didn’t use any additional oil.  Instead, I just sprinkled each packet of veggies with salt, garlic, basil, and oregano.

The way you fold your packets will be slightly different depending on if you are using the grill or the oven.

Foil Packets For The Oven

When using the oven, you want to create “steamer” packets.

Step One: Fold hamburger ways and create a lip by folding the two ends over to one side as shown below. 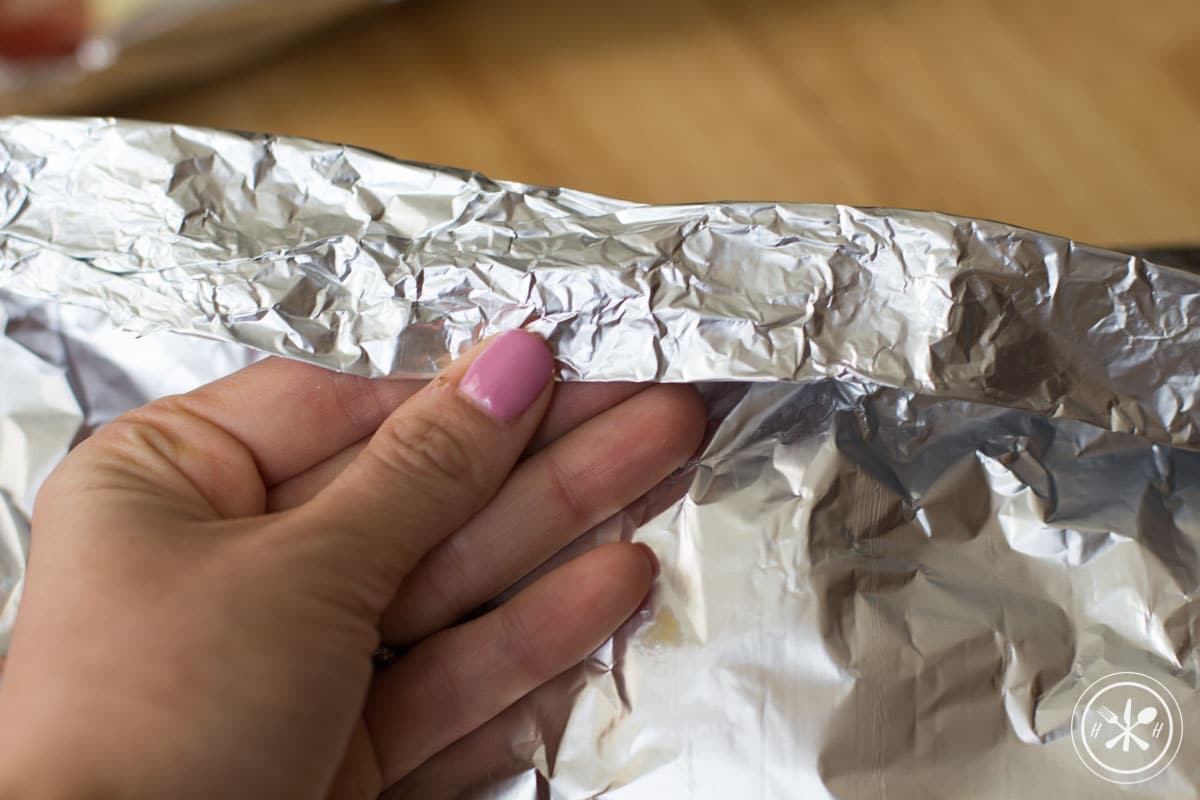 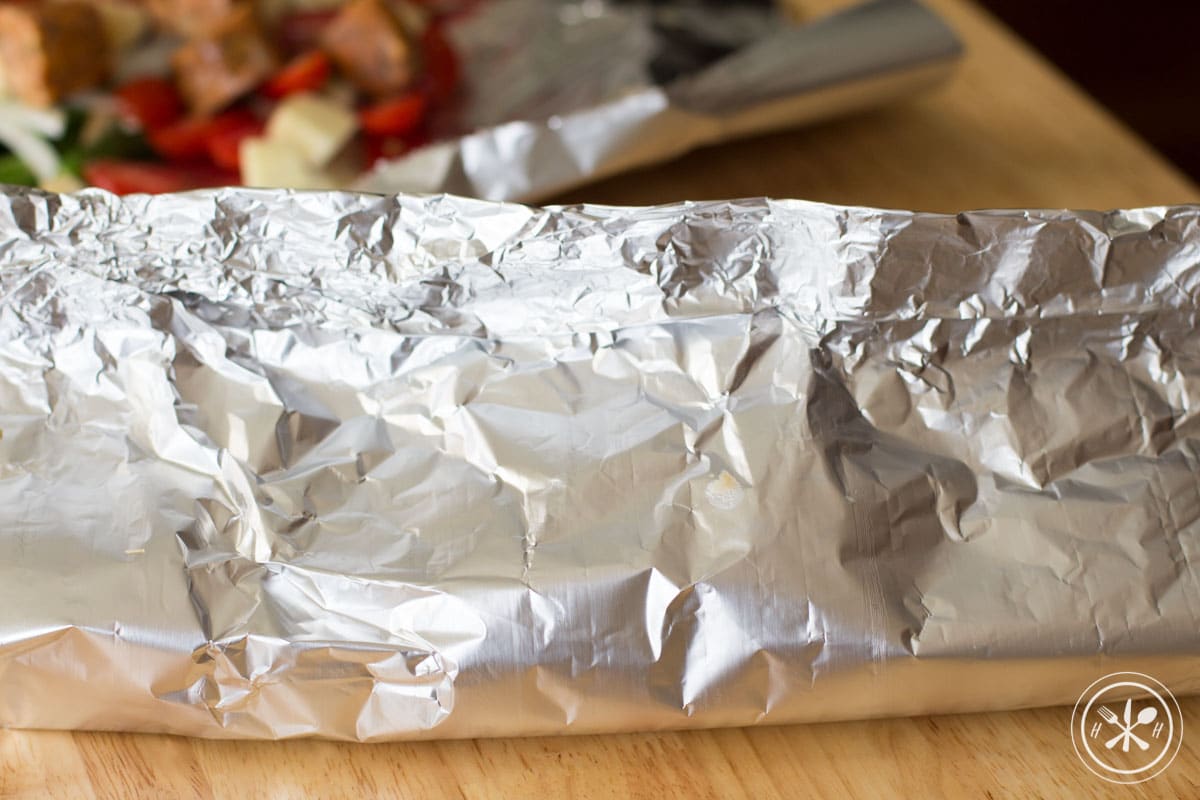 Then fold the open ends in toward the center of the foil packet. 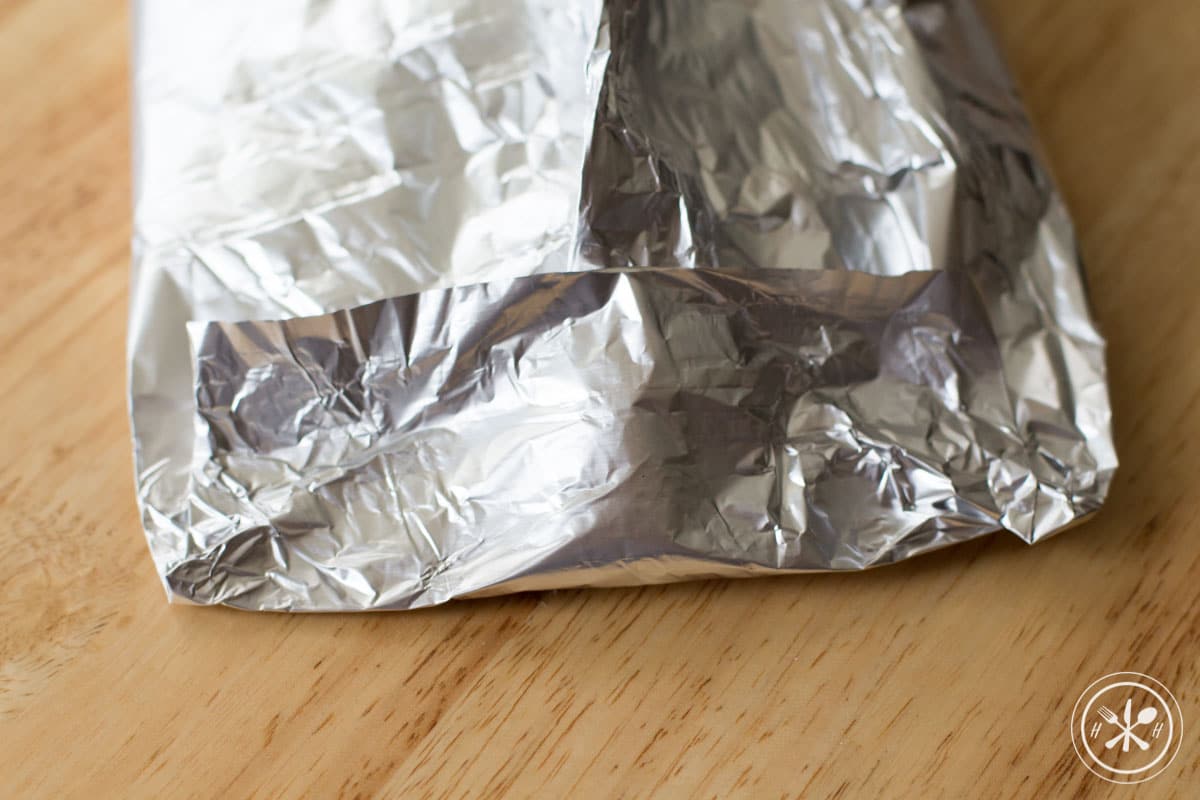 The packets in the oven won’t have quite the chard look of the grill, but you can still brown them by broiling them at the end!  The picture below is the oven version! (The very first photo in this post is the grill version.) 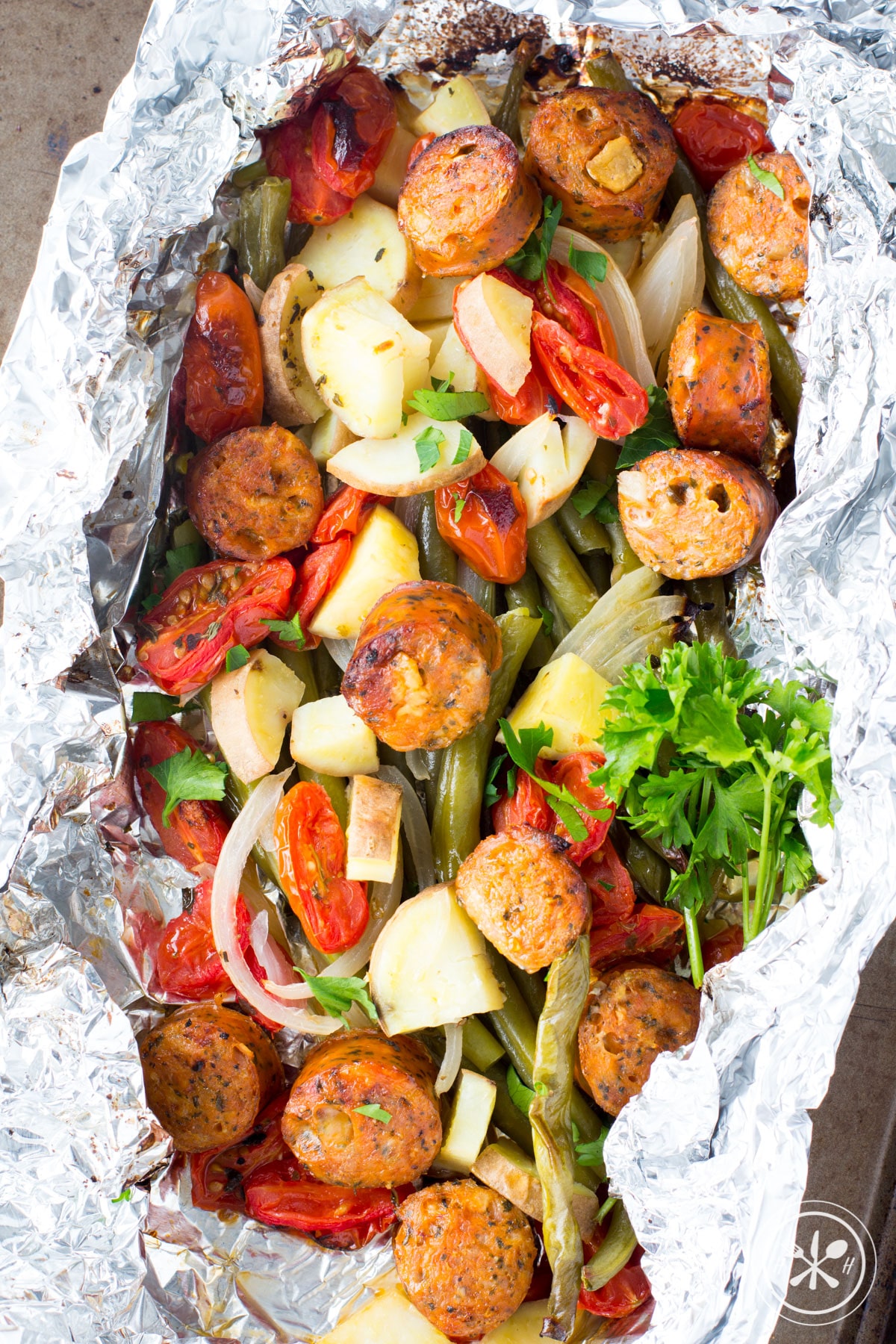 Foil Packets For The Grill

For the grill, you’ll use two sheets of foil.  You’ll fold the four sides onto each other so that the foil lays flat.  Then, flip it over seam side down, place on the second sheet of foil and do the same thing.  So the first foil seam will be the opposite of the second one.  That way you can flip the foil packet on the grill so that both sides get a nice little char. 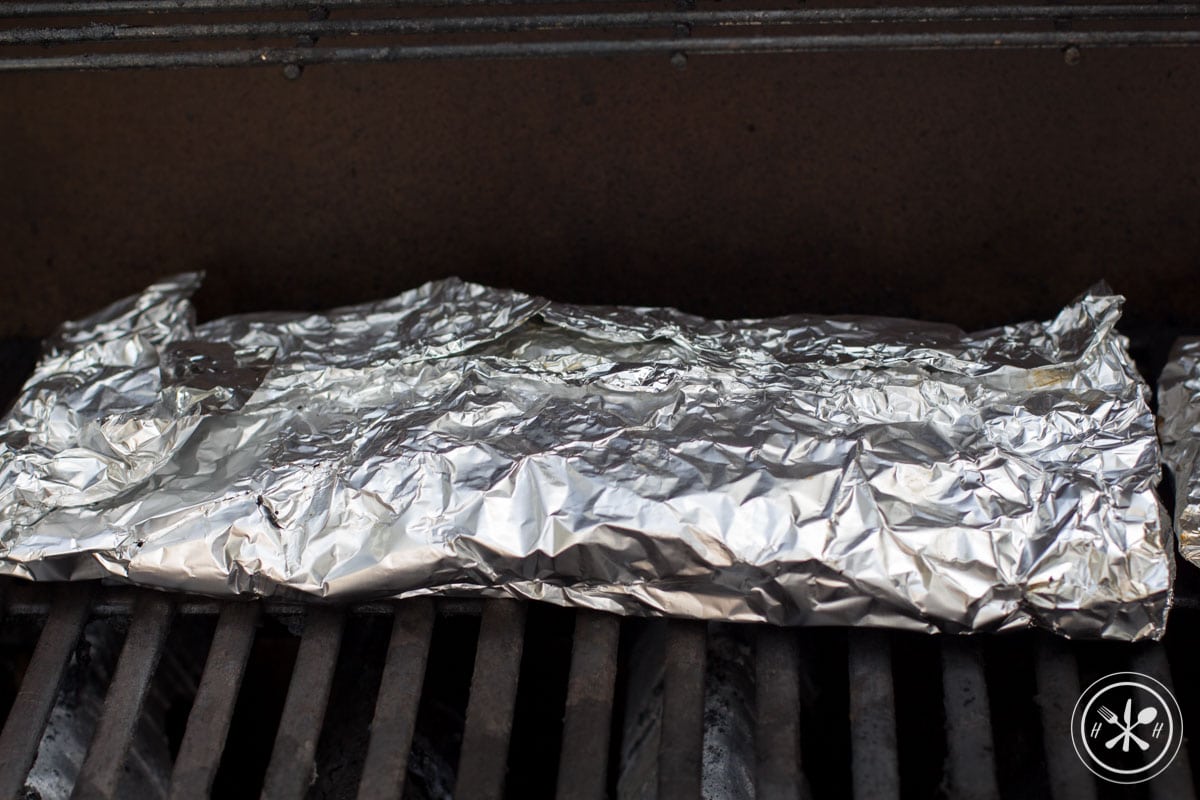 I’m a firm believer that all recipes can be great for “meal prep,” but one pan/one dish recipes like this take the hassle out of meal prep!  Especially if you are already grilling on the weekend anyway! 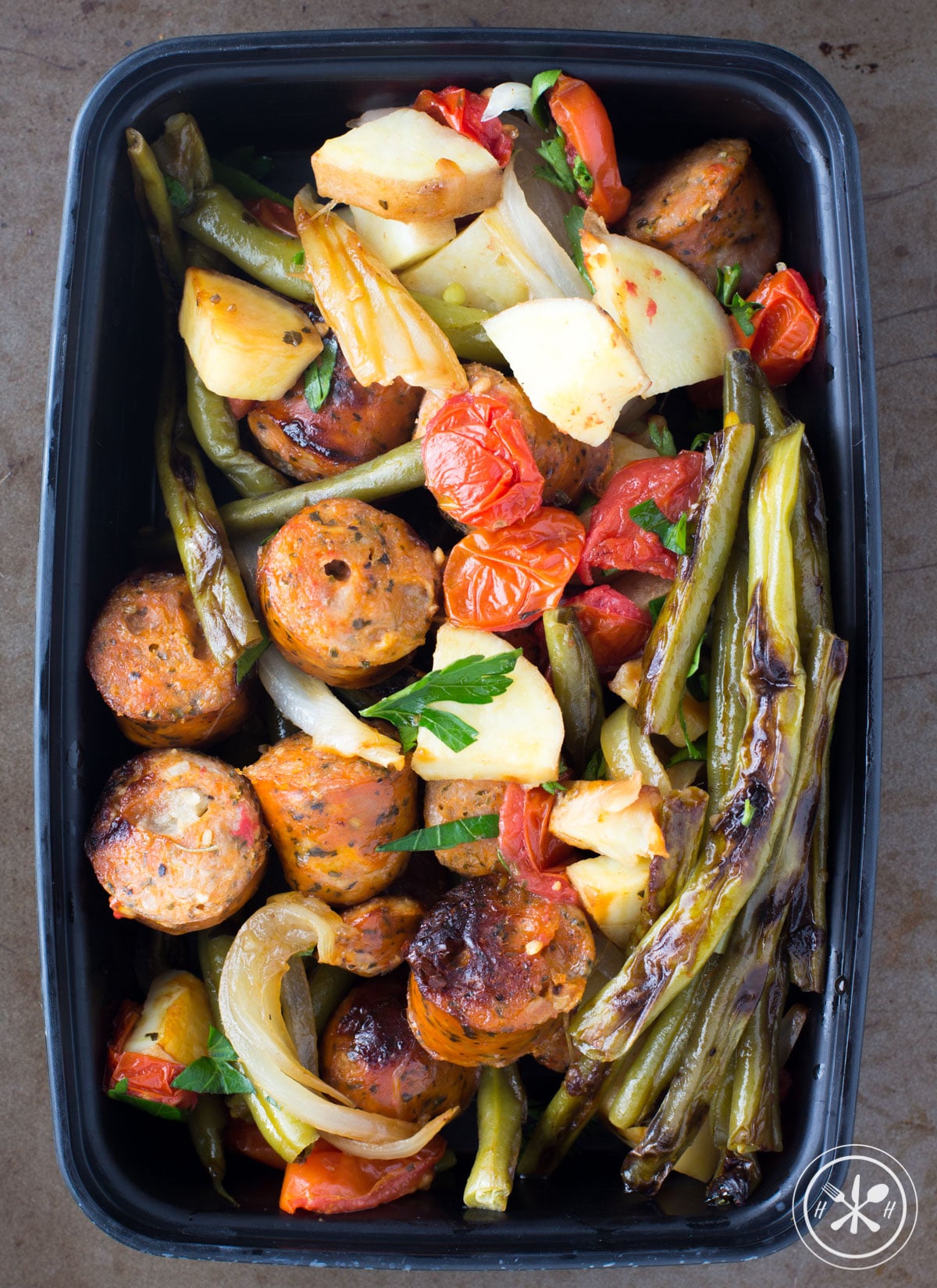 Not signed up yet? What to Eat? Meal Plans! are balanced, healthy, gluten-free meal plans designed by a Registered Dietitian (that’s me!) to make healthy eating more convenient. Plus they include delicious recipes from Hungry Hobby like this one! Learn More and Sign Up for a FREE Week!

Print Recipe Save RecipeSaved!
5 from 6 votes 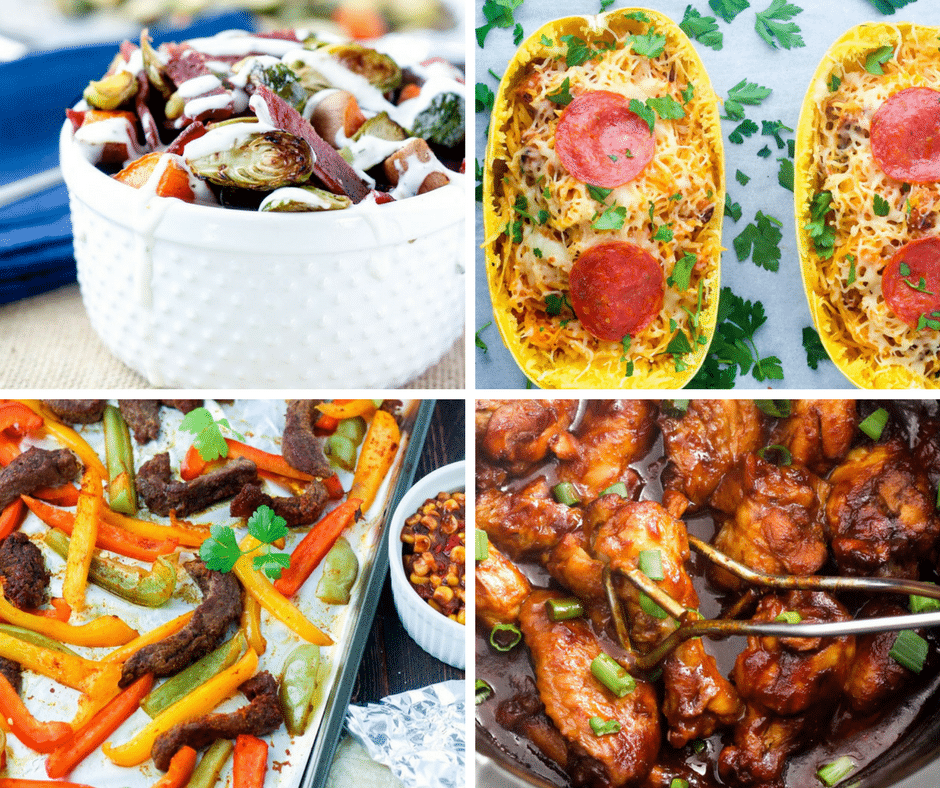