Nala’s Birthday was NOT forgotten, but I did forget to write about it.  On February 11th, 2019 Nala turned four years old!  I was reading last year’s update, and I was surprised by how much she has changed yet again. 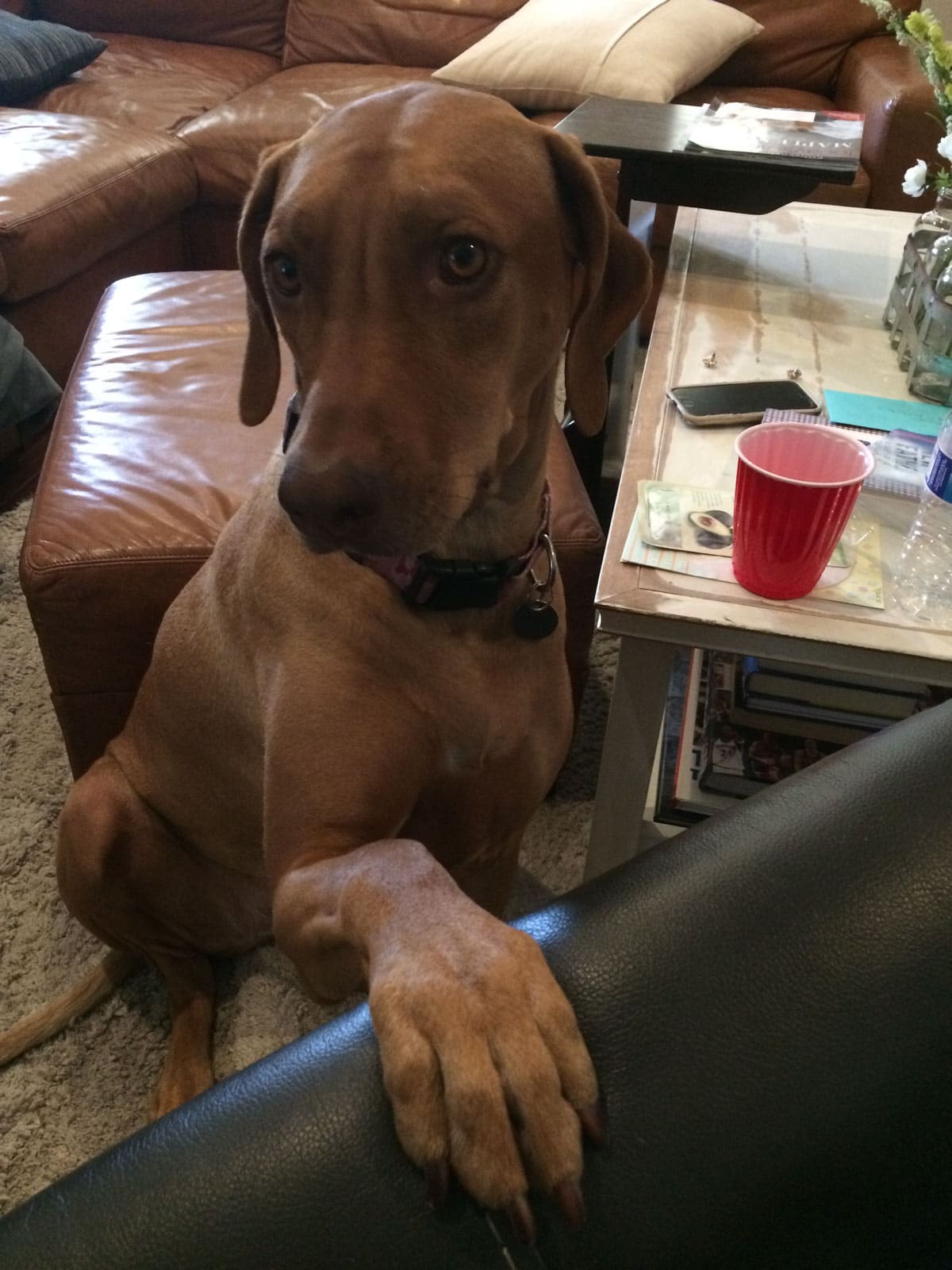 As far as behavior goes, she has backslid a little bit, and I mostly blame us for that.  She gets less attention from us, so instead, she looks for it from strangers.  We don’t have to avoid people when walking or anything. She knows that if she isn’t invited, she shouldn’t go near them.  However, IF they acknowledge her AT ALL, she thinks bad behavior is fair game.

People ask “can I pet her?”

I always respond “she might (read definitely will) jump on you.”

Meh. Approach the lady with a giant dog and tiny baby at your own risk.

She still gets lots of walks in, but not very much running.  I’ve been using our home treadmill a lot because there just isn’t the opportunity to get out and run.  We still go on morning walks though, and although she was scared of the stroller at first, she does well with it now.  I think she likes that the stroller carries treats (for behavior training) and an extra water bowl for her (previously she drank from a stream we poured out of our water bottles.) 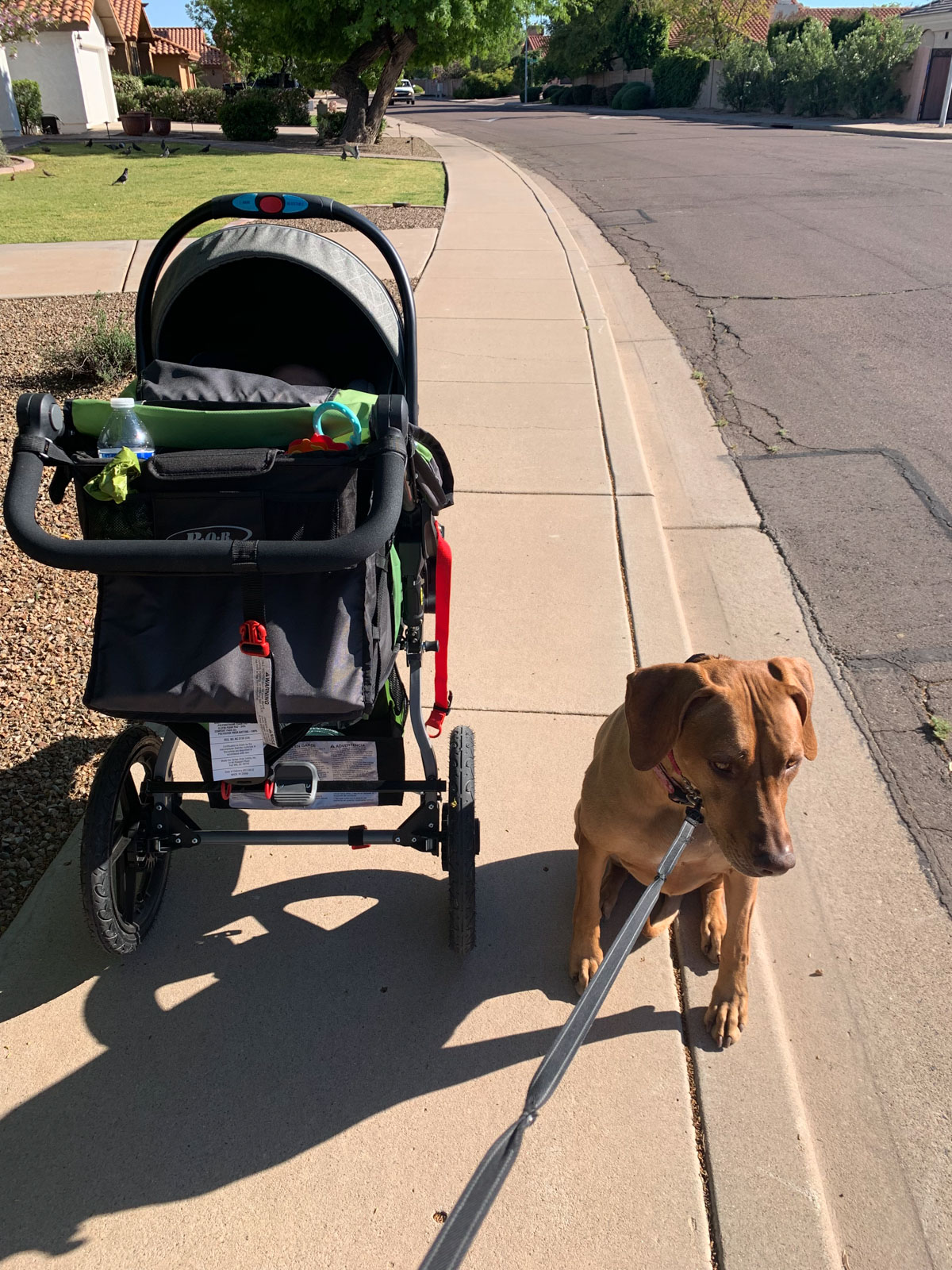 Nala’s days, like mine, are much more active than they used to be.  While she used to spend all day sleeping on the couch, there is now a lot more entertainment. For the most part, she likes to be where ever we are with the baby.  She often tries to wedge herself between the baby and us and lay down right there.  One of my sitters thought she was trying to protect the baby, but I think she wants to say NO IM THE BABY! 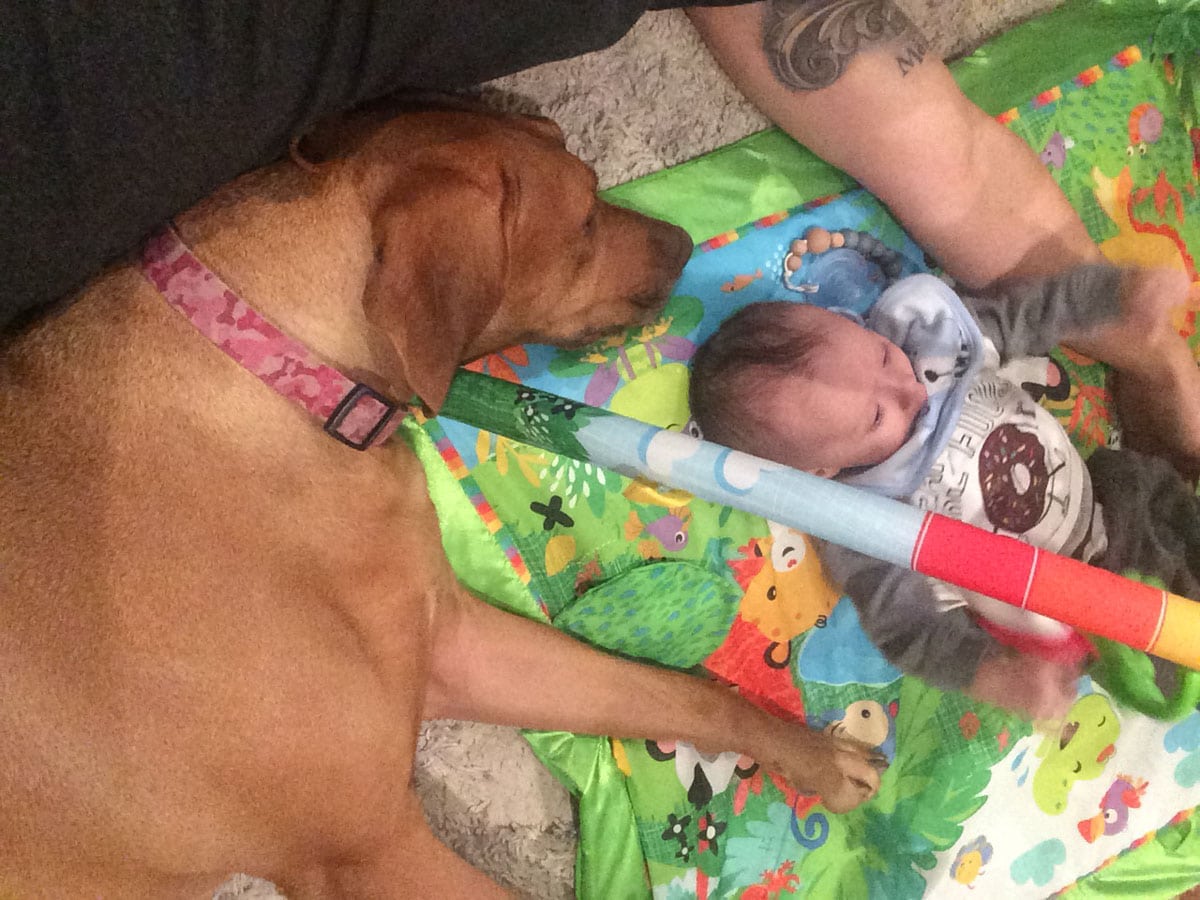 Whichever it is, it doesn’t matter because she loves Little Man so much.  She is always trying to lick him, and she sometimes gets concerned when he cries.  Now that Little Man is reaching out and grabbing things, a lot, we are working on gently letting them interact.  He’s grabbed her face kind of hard a couple of times before I realized what was happening, but she seems unphased.  I’ve been working on giving her lots of positive encouragement and treats whenever they interact to reinforce her already good behavior.  Plus feeding time is automatic positive reinforcement. 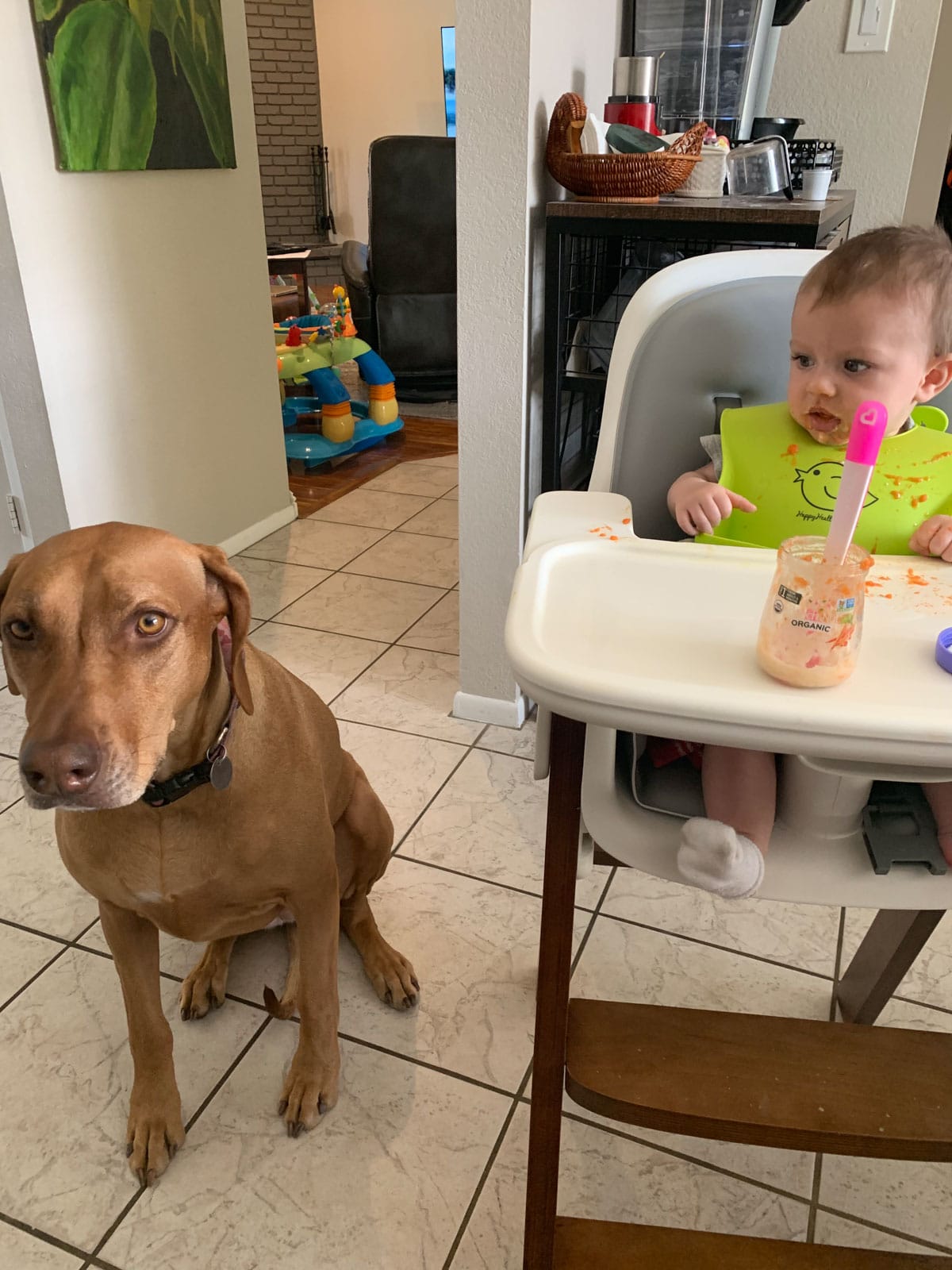 One thing I’m really surprised about is how much of the babies toys she leaves alone.  She will occasionally grab a stuffed animal out of his room or something new that she doesn’t understand isn’t hers yet.  However, overall she leaves most of his stuff alone, which is great because it’s often spewed out all over the living room.  It would be stressful to have to clean it up 24/7 so that Nala didn’t get to it.

I often wake up to Nala in the bed where Mr. Hungry should be.  She quietly jumps up every morning as soon as he heads out to play basketball.  She used to wake up several times a night and annoy the crap out of us wanting to go outside or jump on the bed, but she doesn’t really do that anymore, seems she is too tired from all that day time activity! Sleep is a hot commodity in our house, even for the dog! ha ha

Speaking of activity, she doesn’t LOVE the dog park as she did before.  Now, she will play 10-20 minutes and call it quits.  When she is ready to go she will happily follow us out without any drama.  It’s kind of crazy!  While I miss that puppy like the energy of hers, it’s nice that she doesn’t need 45 minutes of constant play to tire her out anymore.  This video pretty much sums up her energy levels nowadays.

We’ve been giving her rawhide bones to help with her teeth.  Side note, did you know that when a dog chews on a rawhide bone and there is a little bit of blood it’s actually similar to us flossing our teeth?  Learned that from my Aunt this year, who often brings Nala a little treat when she comes over.  One funny thing she does with her bones is run around the house crying.  She loves it so much she is beside herself and doesn’t know what to do with it, it’s hysterical.  Well, it’s hysterical until she tries to bury it in my couch….

Overall, I’m proud of how well Nala has adjusted to our new family in the past 6 months.  I know some dogs (even the best-behaved ones) really lose their sh*!, but she’s done well.  She is still the same gentle giant she has always been, and although it’s sometimes hard to wrangle the baby and the dog I wouldn’t have it any other way.  Happy Birthday, Nala bear!