If you are new around here, you might not know that Hungry Hobby started as a daily blog, or journal if you will.  I shared all my meals and what was going on that day.  I shared my quest for healthy living, my wedding planning, honeymoon, and more.  And within a year of starting the blog, we impulsively bought our gentle giant, Nala.  Her early years are well documented on the blog, but once a year, I try to give her the attention she once had with a little recap around her birthday. 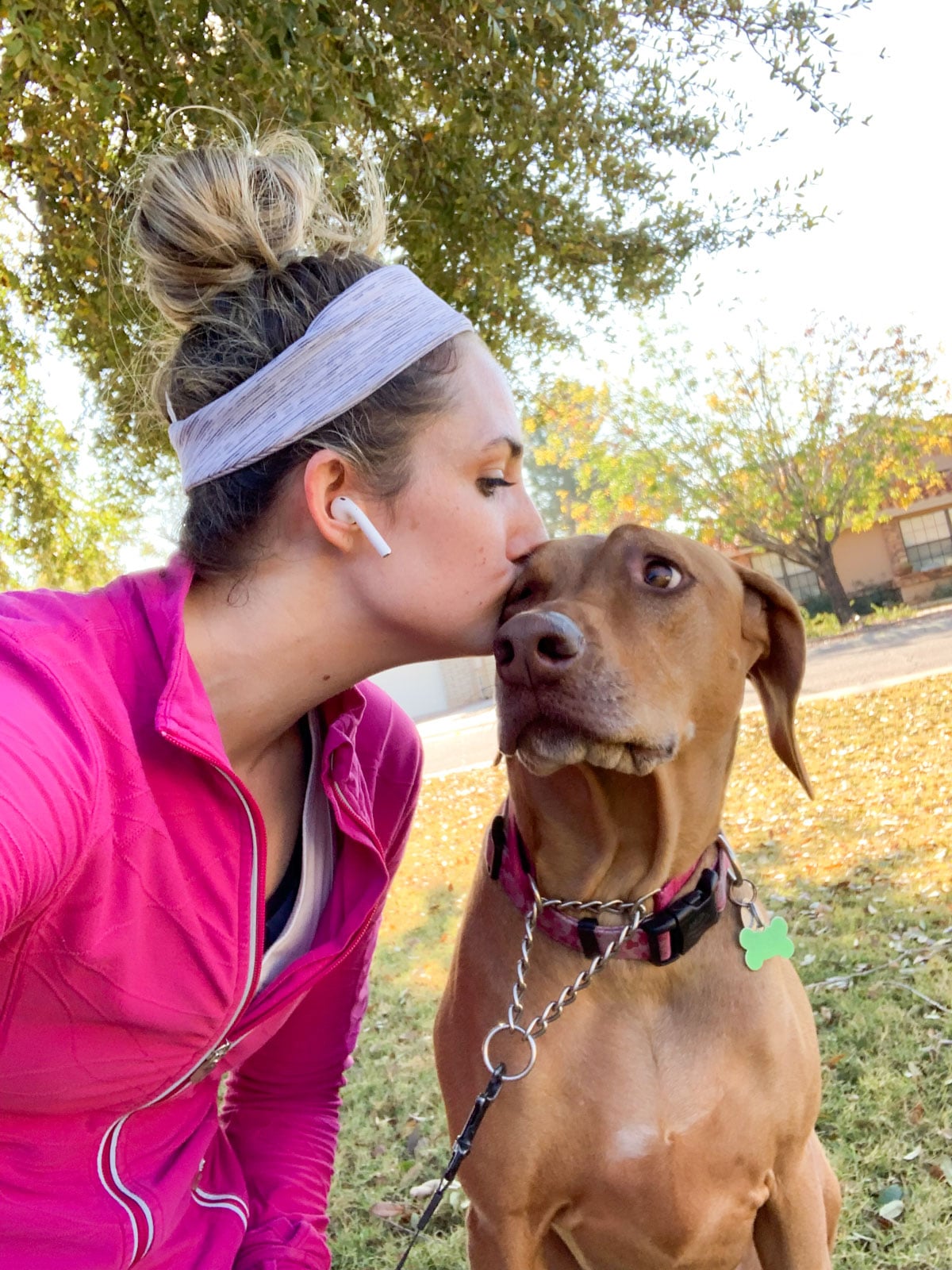 If you want to skip this one, we will back to our regularly scheduled healthy living program tomorrow. Although, today, in a way is about healthy living because Nala is good for my mental health and an important and often overlooked part of healthy living.

I am surprised because every year I have a lot to say about her.  As our lives have changed, our family has grown, and Nala has gotten older and she changes too.  You think a dog would always be the same, but she isn’t.  She’s more mature, less excitable, but just as friendly and loving as ever.  This post is a little late but better late than never, this year Nala turns five and it’s been a year for her (hasn’t it for all of us?)

For those of you who don’t know, Nala is a pure breed Liver Nose Rhodesian Ridgeback.  Her breed tends to be standoffish or aloof to strangers, stubborn, lazy if you give them enough walks, and great at stealing food off the counter.  The latter three describe her, but her personality doesn’t match most Rhodesian Ridgebacks.  She’s friendlier,  more hyper, and more loving to everyone, not standoffish.  I wouldn’t have her any other way! 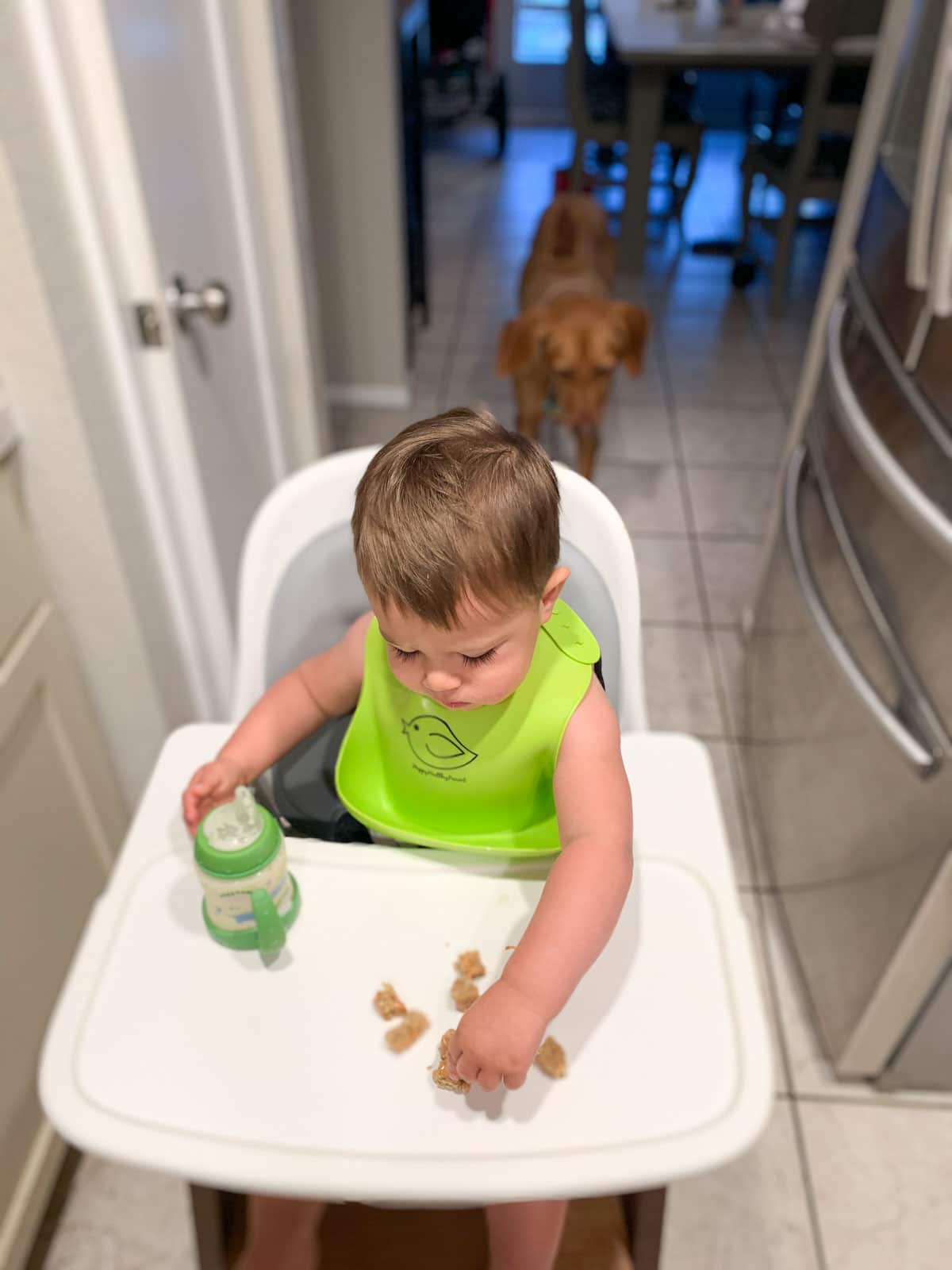 Overall Nala and KJ have a relationship of mutual adoration and love, but with limited understanding of each other.  Isn’t that the case with all siblings? (I wouldn’t know, I’m an only child.)

We try to remember to lock Nala up in her kennel when KJ eats, but sometimes I’m lazy or I forget.  She’s learned that if she stands behind the high chair that I care less if she’s out (KJ can’t see her to throw her food.) So she stands behind him like a creeper when he’s eating.

Nala takes a lot from KJ, but she does get visibly annoyed with him every once in a while, especially while repeatedly being disturbed when trying to sleep (welcome to the first five months of motherhood Nala).  We’ve been vigilant at rewarding Nala for tolerating bad behavior and giving time outs when KJ hits, try to step on her, pushes her out of the way, etc.  Toddlers are a bit abusive, aren’t they?  If you have tips, I’d love to hear them!

Luckily Nala is not possessive over toys at all, although we don’t let him play with her toys regularly, because that’s gross (although sometimes unavoidable.)  She loves to play fetch with KJ.  I’ve seen her run past kids to go to adults to play fetch with, but she doesn’t do that with KJ, she will happily bring him back her toy.  It’s pretty adorable.  She also drops it for him instead of waiting for him to play tug with her like she would with us.  Double cute.

Day in the Life of Nala

Nala sleeps on her dog bed by my side of the bed every night.  Then when I get up between 4-5 am, she hops on the bed and takes my spot next to Mr. Hungry.  Her breakfast comes either after I get the baby or when Mr. Hungry gets up to work out.  We try to have the baby feed her to help them positively interact.

After the baby has breakfast, then it’s off to our morning walk.  You may notice that Nala kind of lags behind when I show our morning walk on Instagram.  She’s done this since we had the baby, I think she is cautious of the stroller.  Eventually, she makes her way to slightly behind the side of it.  During the summer, though, once it hits 80 or above, she will lag like the heat is killing her.  Then when we get home, she’ll do a million sprints in the backyard.  Crazy pup! 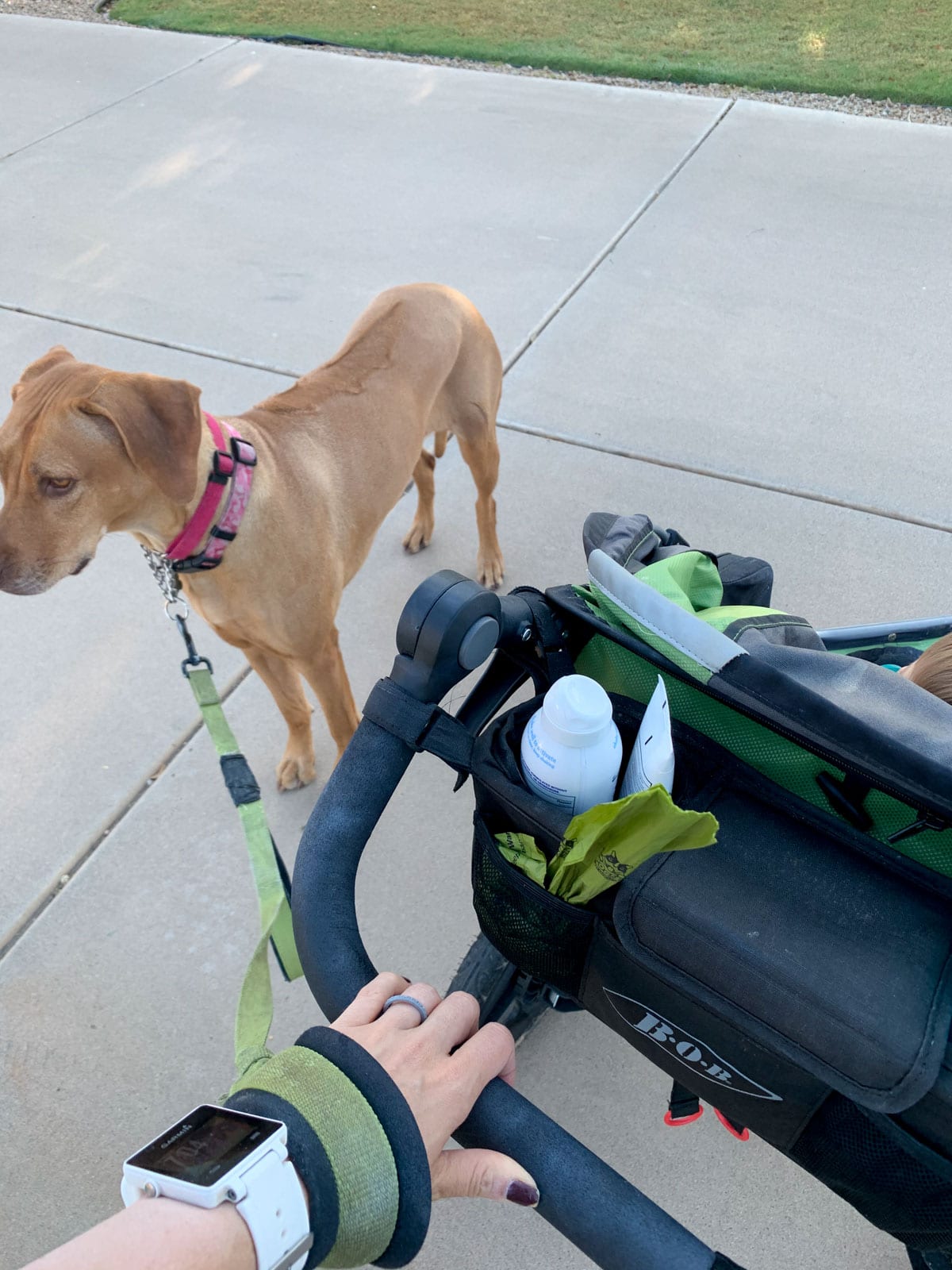 After our morning walk, Nala spends the morning sleeping in various areas of the house.  You can find her on our bed. 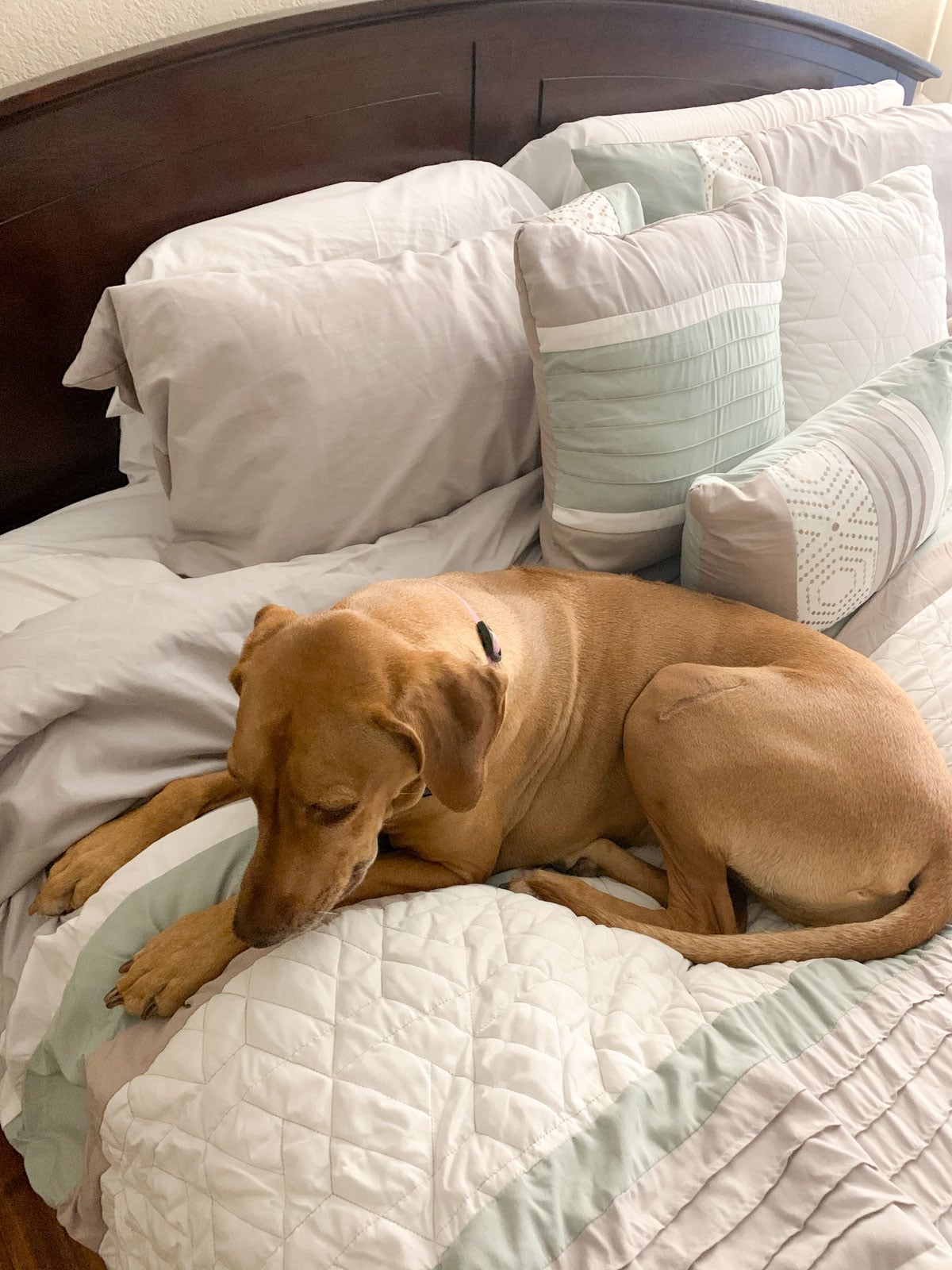 On the couch (after she has knocked off all the pillows off the couch and nuzzled her way to the corner.) 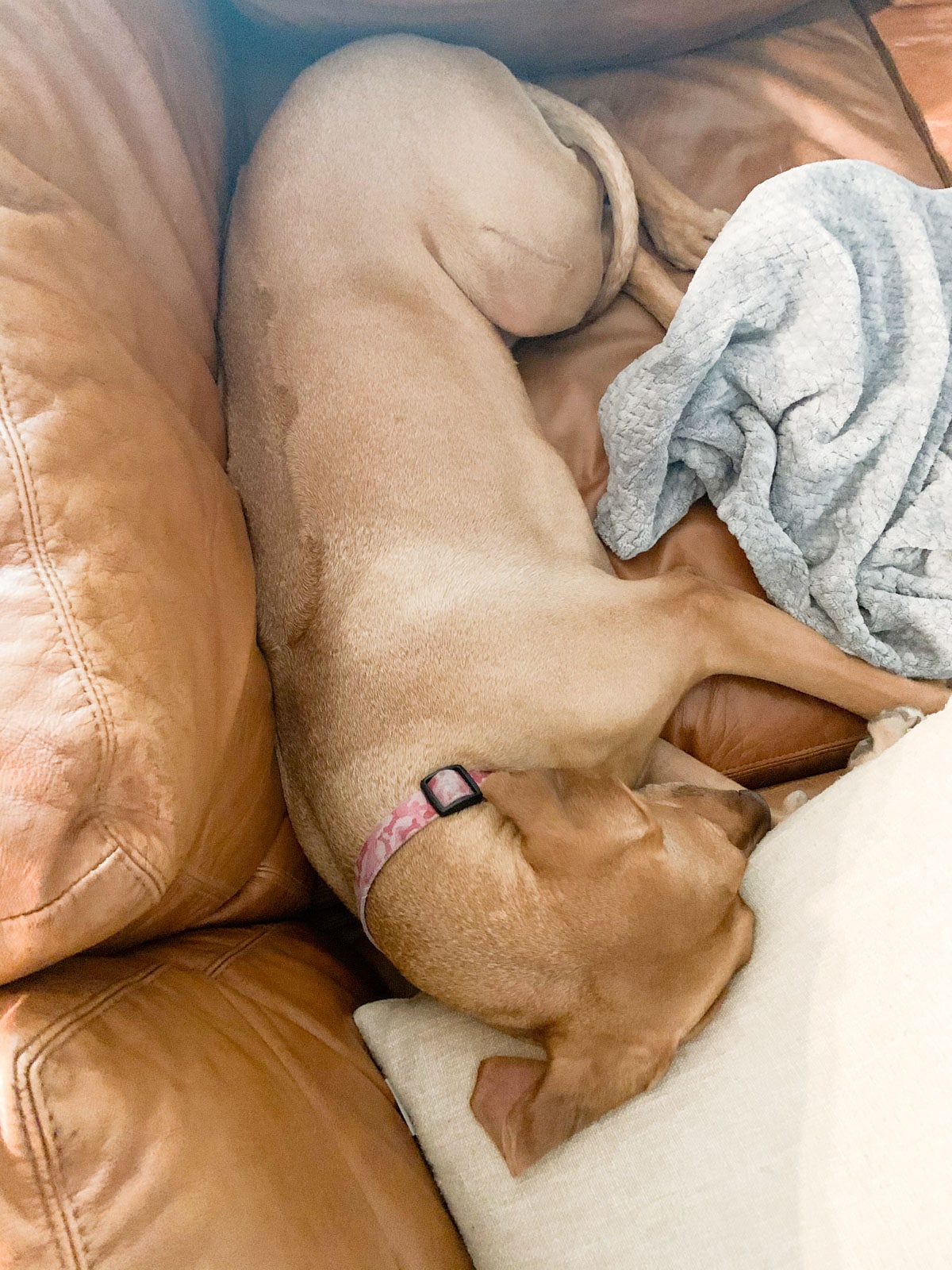 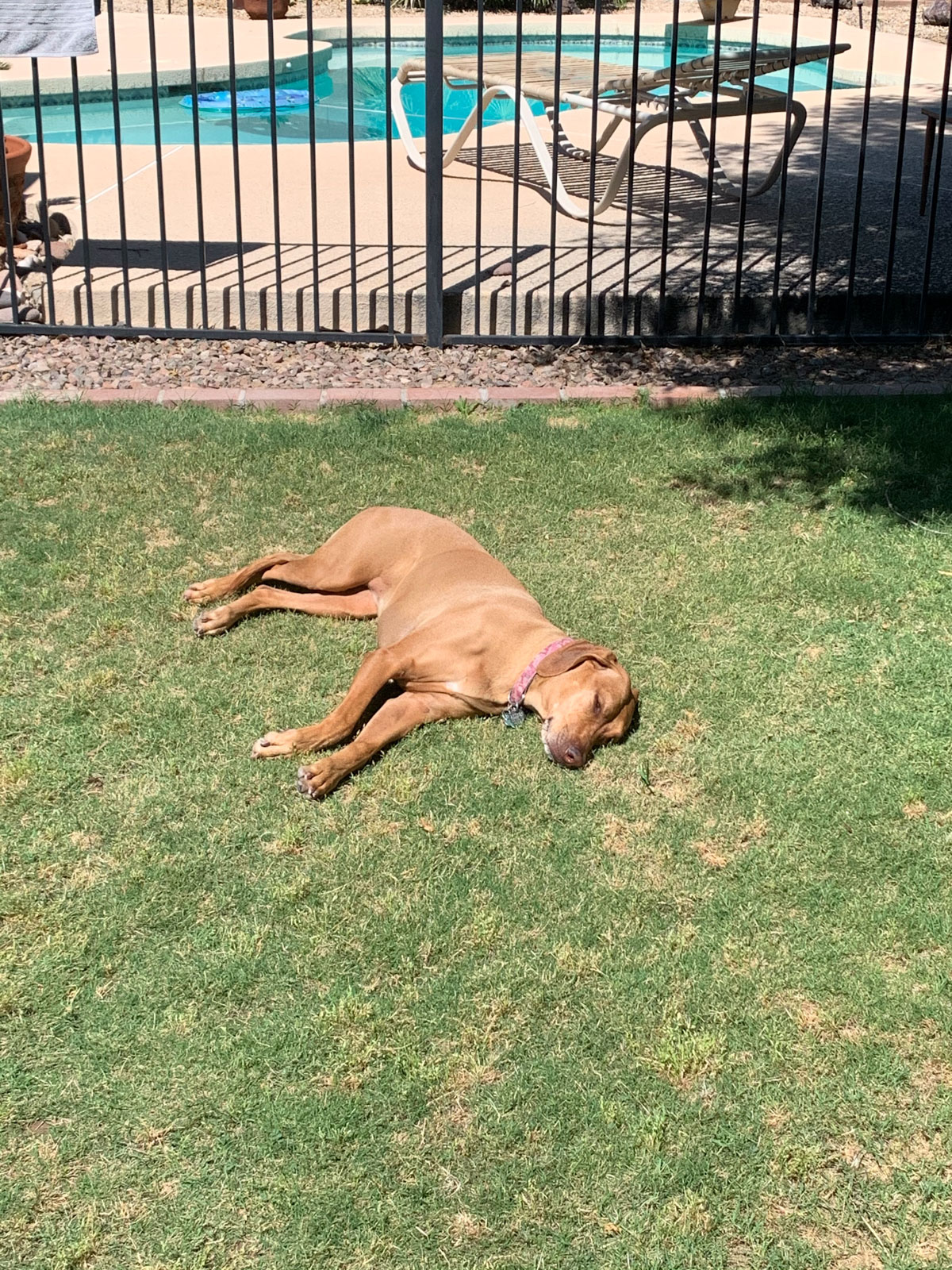 Nala had to get skin cancer removed this year, but our little champ recovered well.  She still loves to sunbath, and the vet said the skin cancer wasn’t related to that, but you know it makes me nervous now anyway.  (Flashback to cone life below.) 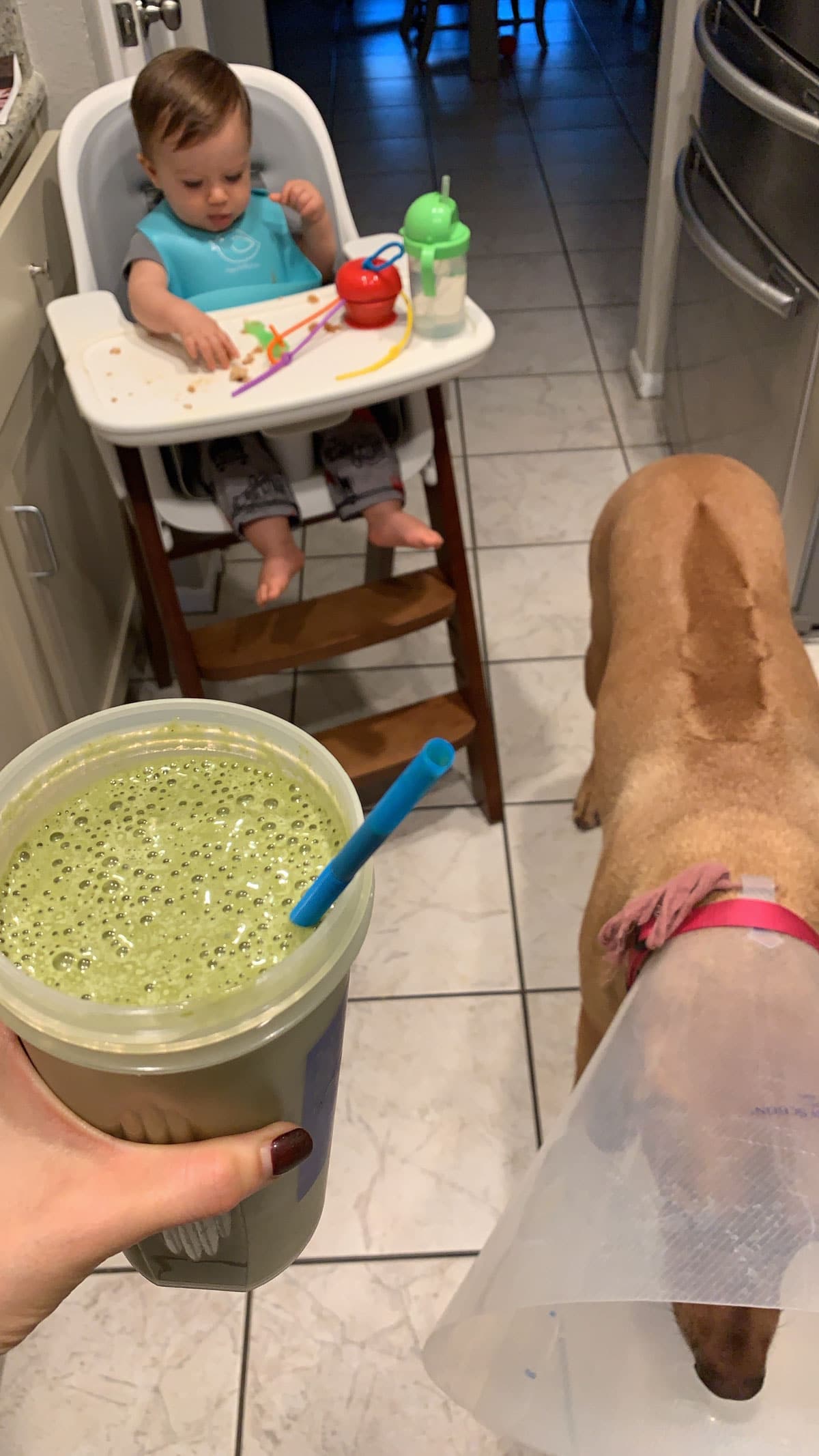 And flashback to right before that when she got stung by a bee and had an allergic reaction.  As I said, Nala has had a year, just like the rest of us. 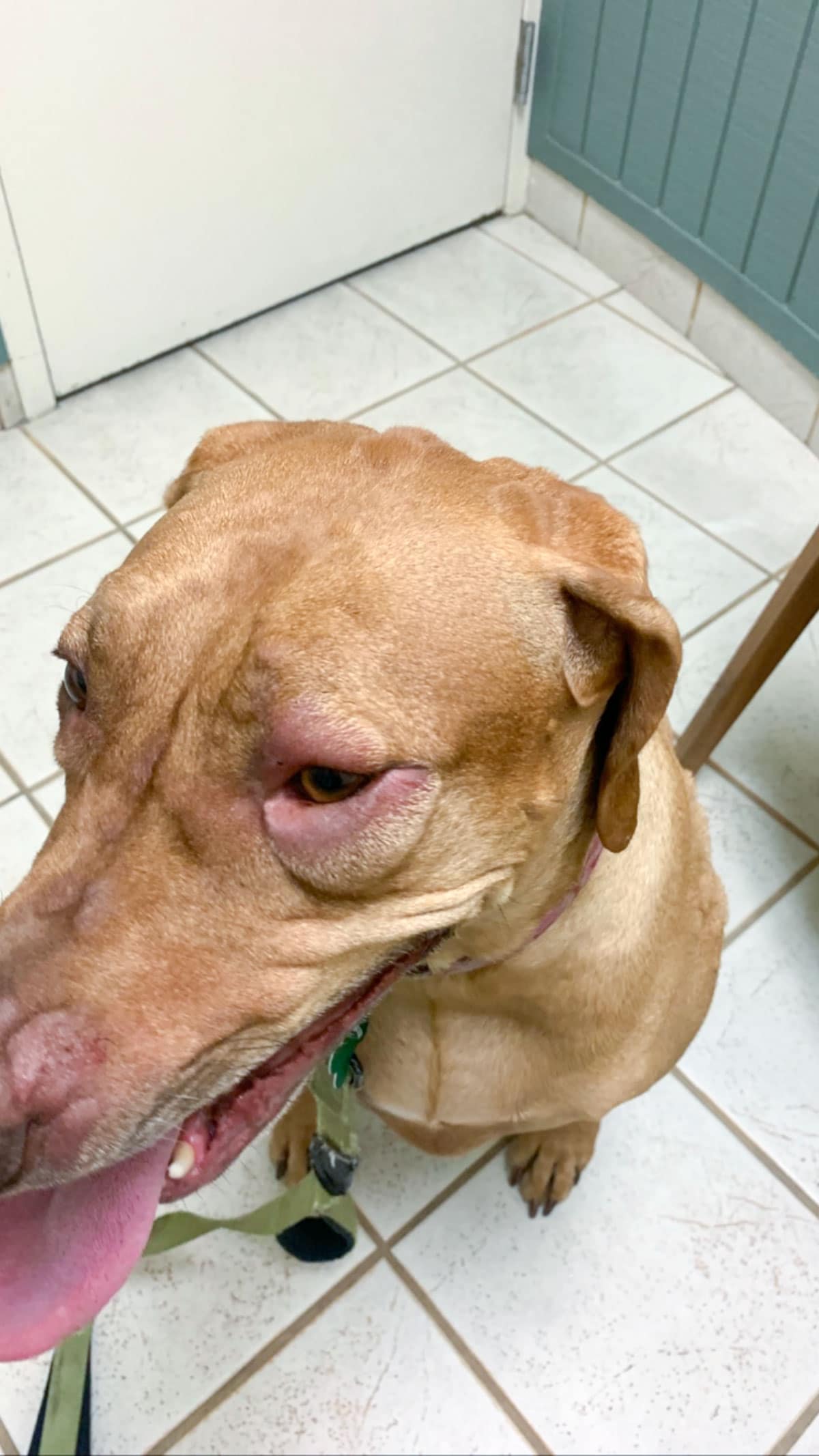 She spends the morning until after the baby’s nap sleeping in various areas of the home.  She likes to be near us, so where she sleeps depends on what we are doing, but you can guarantee she will be sleeping. 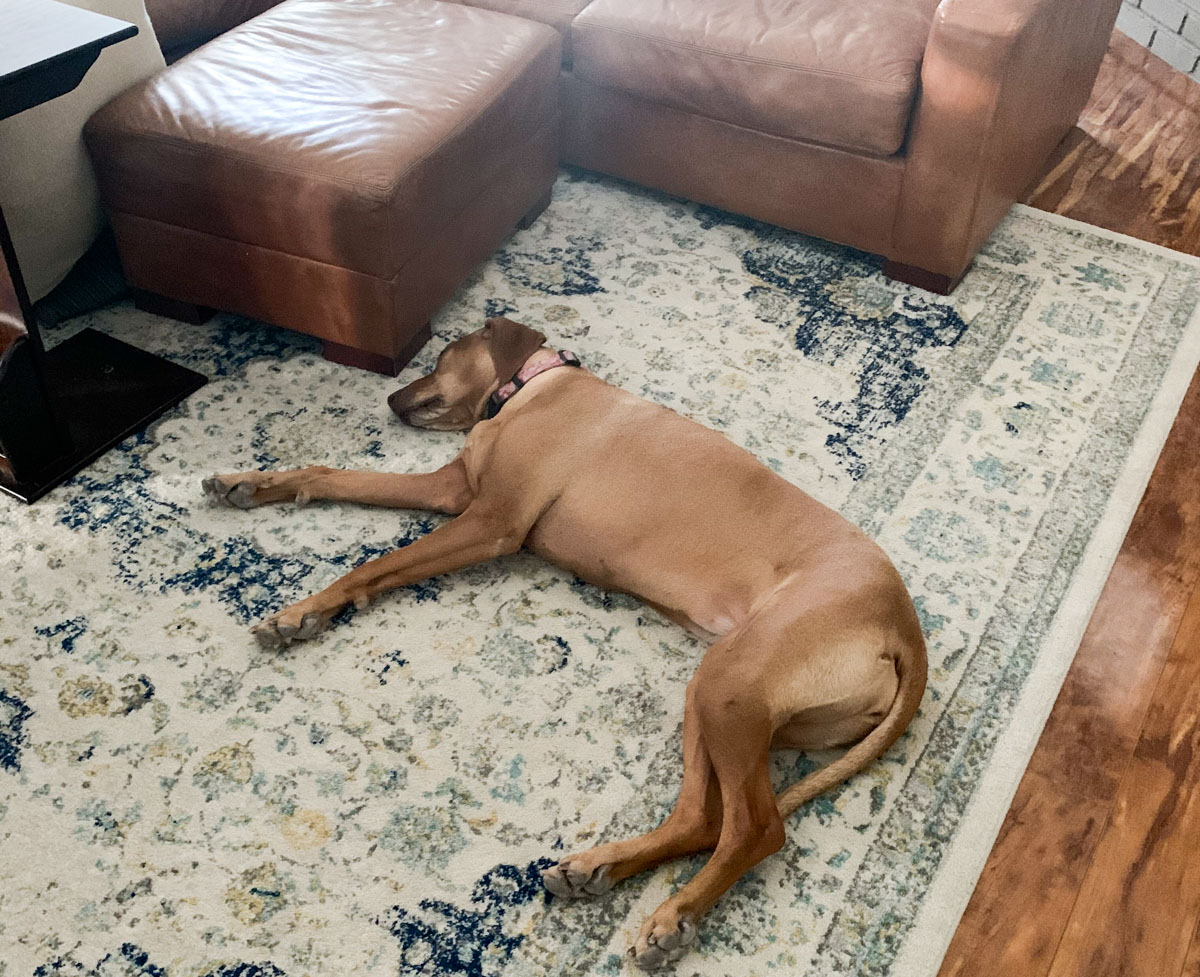 She gets up only for food – if I’m cooking or the baby is having a meal.  In both instances, we usually kennel her, though (unless I’m behind lazy or forget).  She can not be trusted with food on the counter at all.  And as far as the baby goes, he thinks it’s hilarious to feed her so we kennel her for the 15 minutes it takes for him to eat.  Then she cleans up after him! Those of you who have babies and toddlers but no dog to help you clean up, I don’t know how you do it. 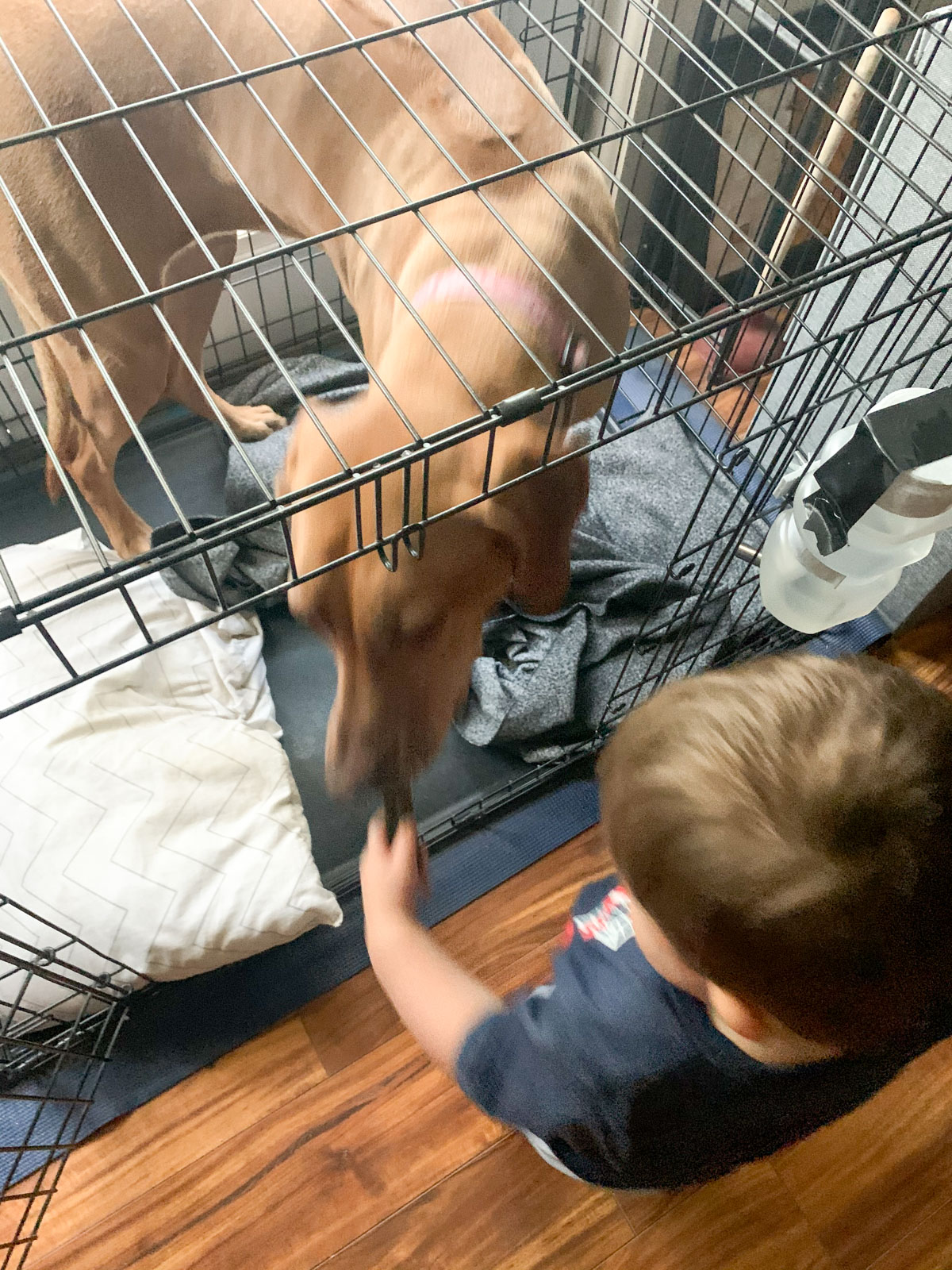 Nala rarely barks, someone has to come to the door and stand there for her to kind of grunt.  If she recognizes the truck, car, or person, that will be it.  Occasionally, she will bark, but it’s a rare occurrence.  So rare, that we give her treats and applaud her for barking when she does it.  I know many people have an issue with insistent barking, but not Nala! 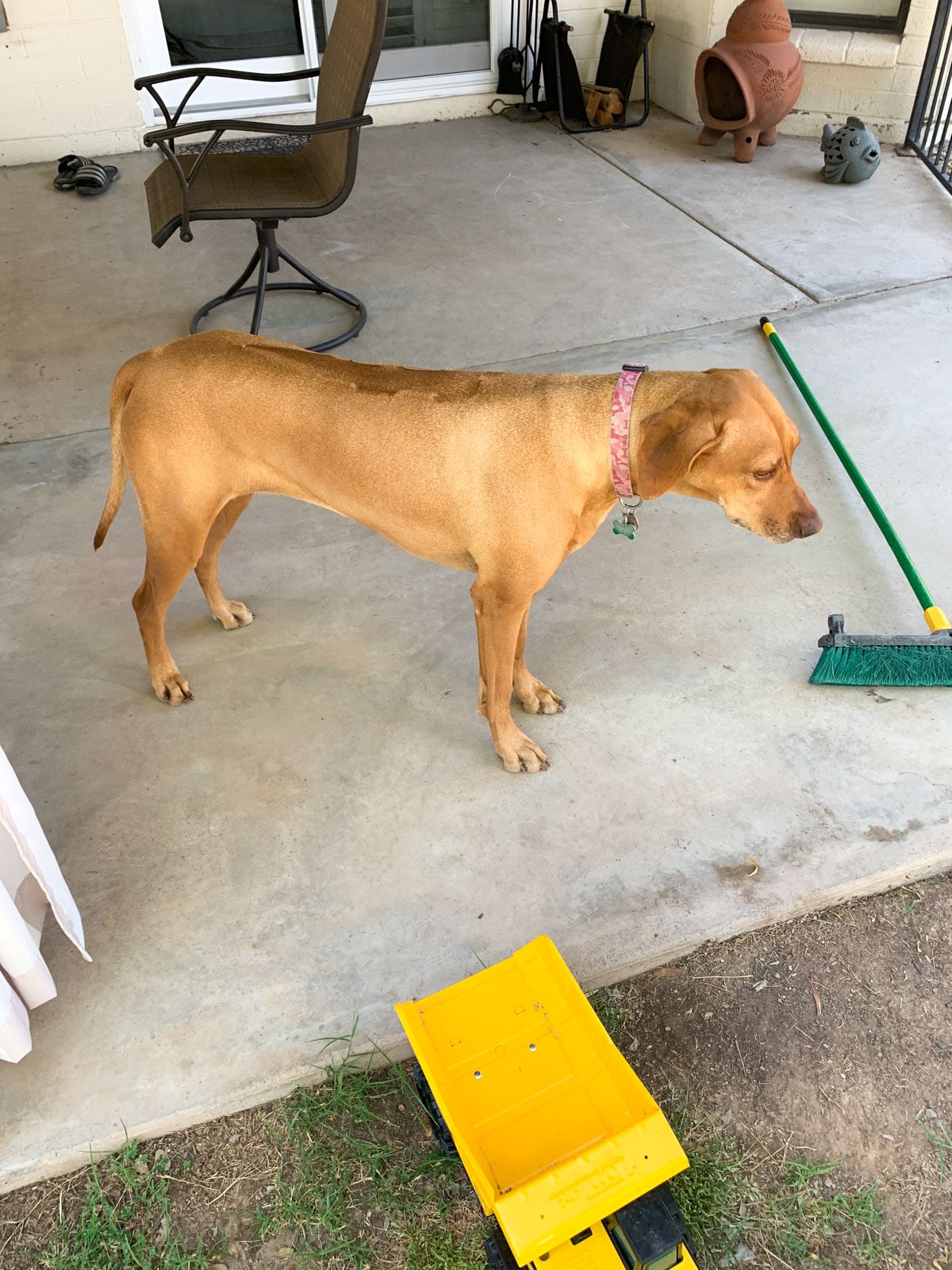 In the afternoon, she is more alert and wants to play more, especially in the early evening.   This is the time we play lots of fetch, both inside and outside.  And no matter what time she gets breakfast, she starts whining for dinner by 4 pm.  Once she’s finally got her dinner, she’s back to sleep unless something interesting is going on.

After KJ goes to bed, she likes to curl up on the couch with us, as close to us as possible, and snuggle like she isn’t 80 pounds until bedtime.  Then it starts all over again the next day!

I can’t imagine our lives without this Furr baby, and I pray every night for many more years of love, snuggles, walks, and fetch to come with her!  Thanks for sharing this special milestone with me 🙂 I’d love to hear how your pups have changed over the years and what surprises you most about being a dog owner!

Previous Post: « Easy Chipotle Chicken Marinade
Next Post: What Fruits and Vegetables are in Season in May? (Produce Guide) »