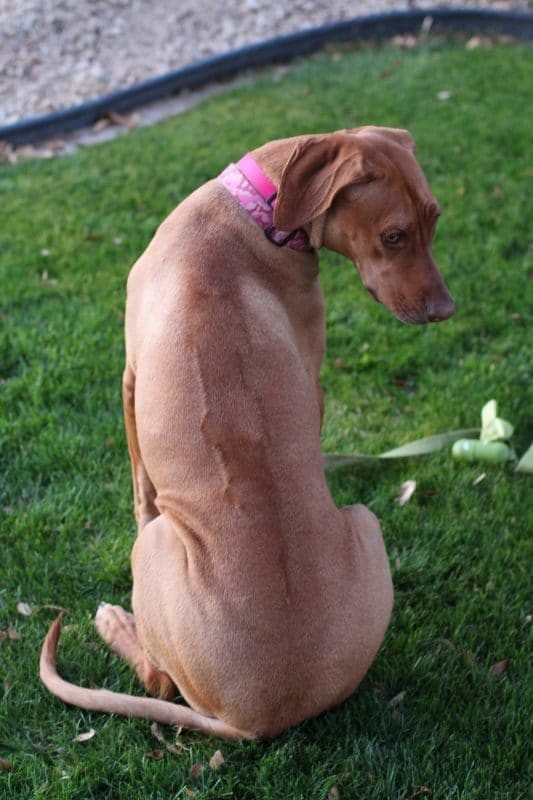 Guess who turned 3 years old this month!  That’s right my little ridgie ridge.  It’s funny, you think having a dog, is just having a dog.  What I’ve learned is that as Nala has grown up, her personality grows up and matures with her.  This year I get comments all the time about “how well behaved she is.” Which totally blows my mind, because I don’t think she listens that well.  It’s selective at best, but people make comments about it so it must be true right? 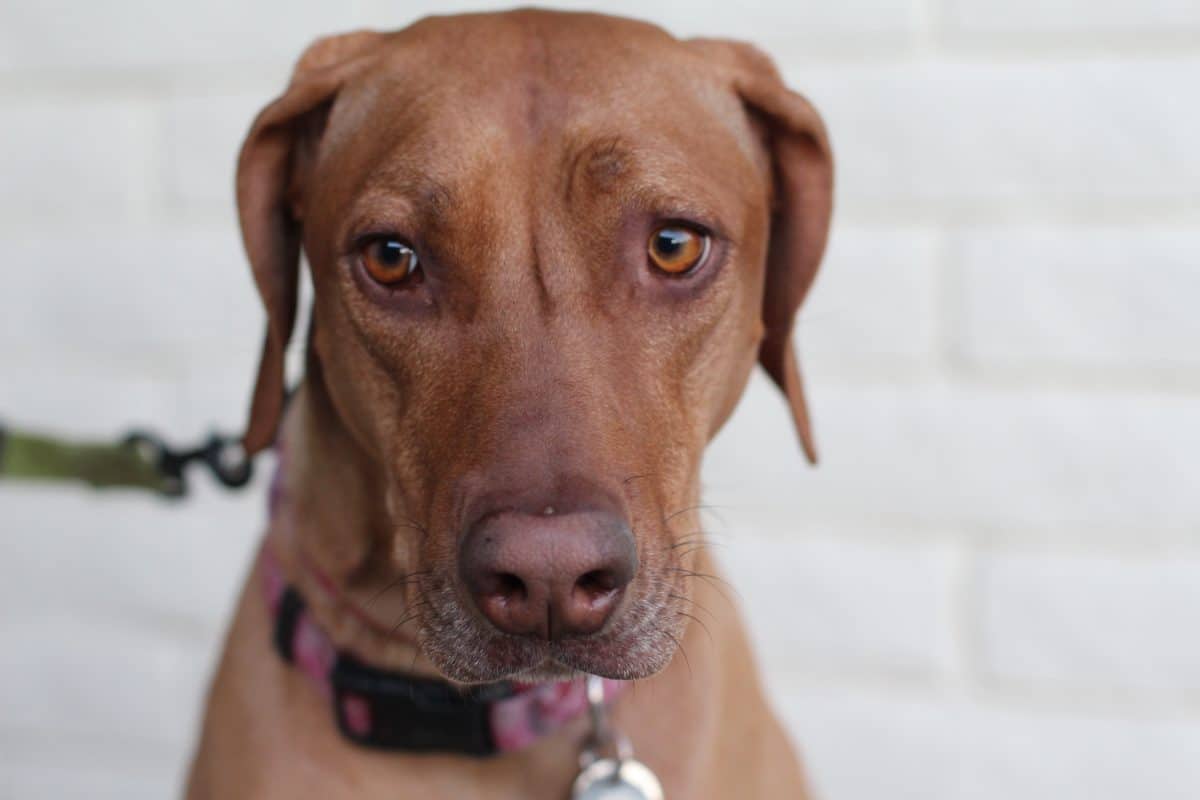 I noticed this year she started getting grey around her snout, and some of her furr on her back has lightened up too.  I didn’t know dogs got grey like that?  Is it just brown colored dogs or all dogs or what?  I also feel like three is so young, like isn’t she 21 in human years that’s too young for grey!  My gentle giant looks OLD, which melts my heart.  Ridgebacks have an expected lifespan of 9-11 years, so she is still young as far as I’m concerned! 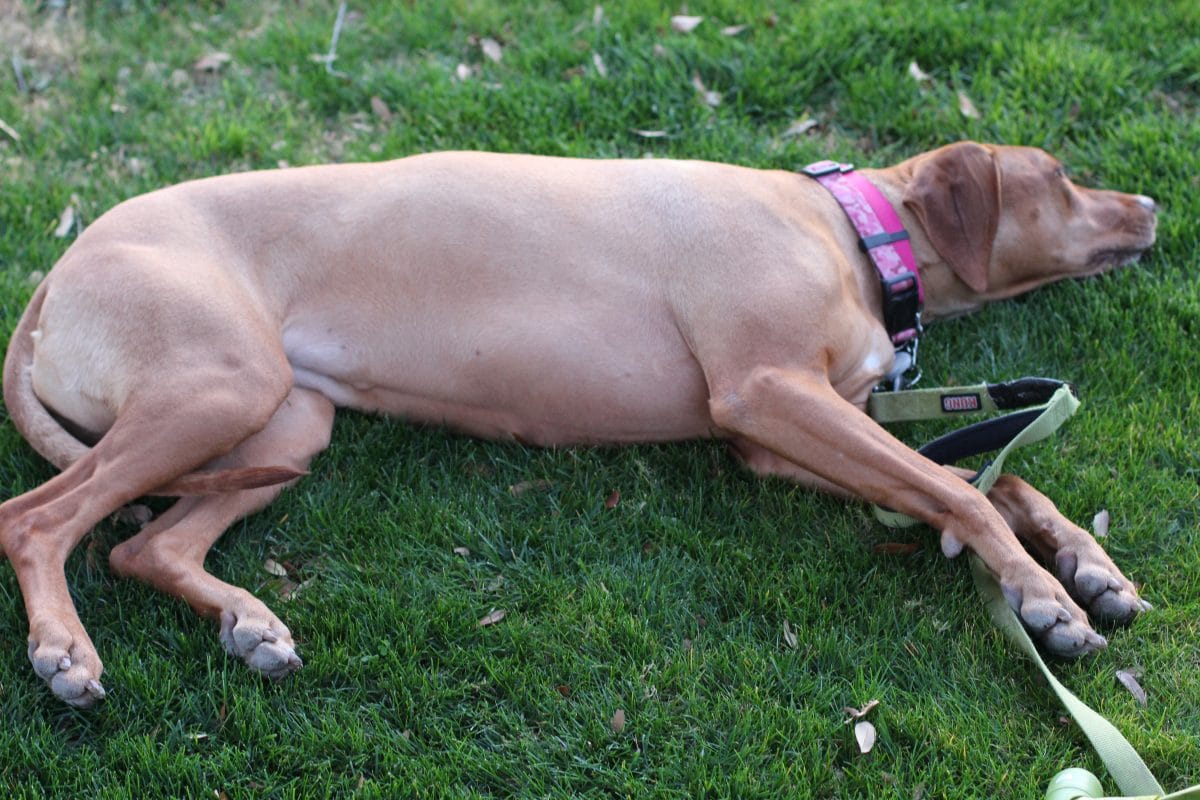 Of course, she is still my favorite running and walking buddy.  Since recovering from my injury flare up the past few months I was reminded why we got Nala in the first place.  When the only exercise you can do is walking it’s nice to have someone to walk with.  And as I’ve gotten back into run/walks it’s nice to have a running buddy too! 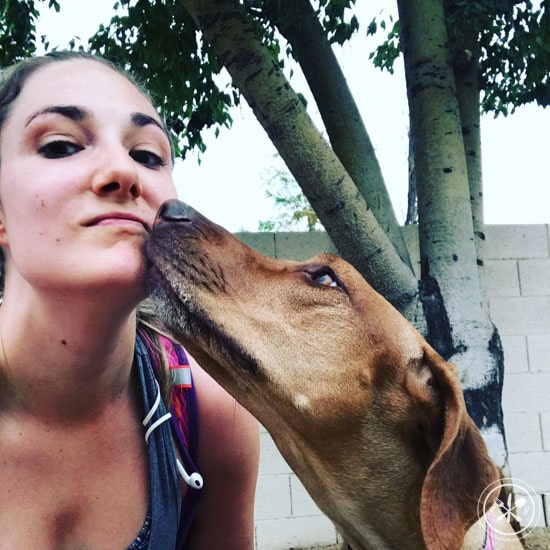 We also went on a ton of hikes this year, especially up the Lost Dutchman which was SUPER fun! I definitely wouldn’t be motivated to go on those trails by myself, but with Nala I was!  (Mr. Hungry has a foot injury so he can only hike sometimes, and certain trails.) 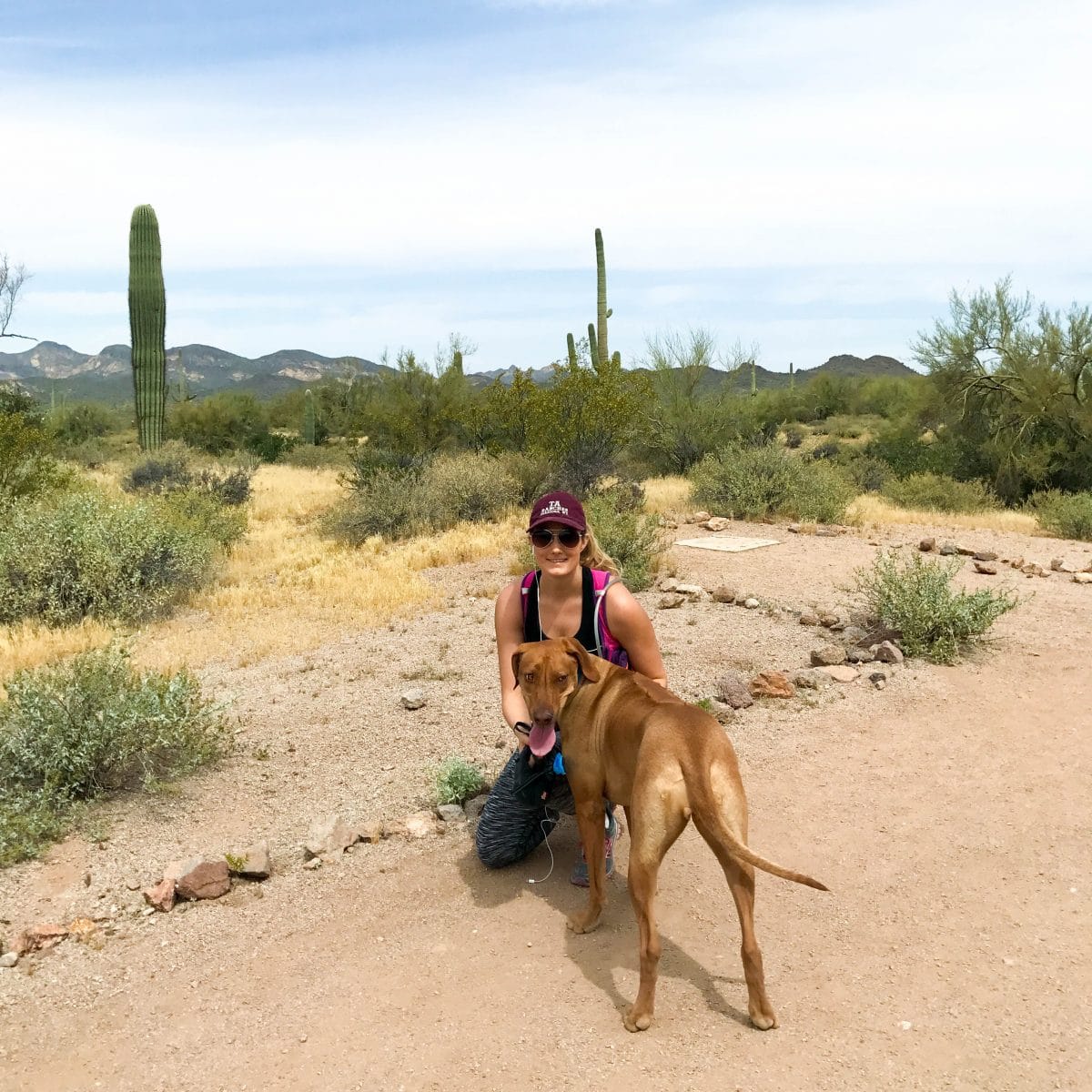 Overall she is definitely more laid back than she has ever been.  She sleeps most of the day but is always ready to play.  She still harasses cat at least three times a day, but unlike when she was a puppy, I don’t worry about it.  Having a one-story house has helped with that too because there are no more games of chase up and down the stairs.  Missy always keeps one eye on her, even when we are all cuddled up on the couch. 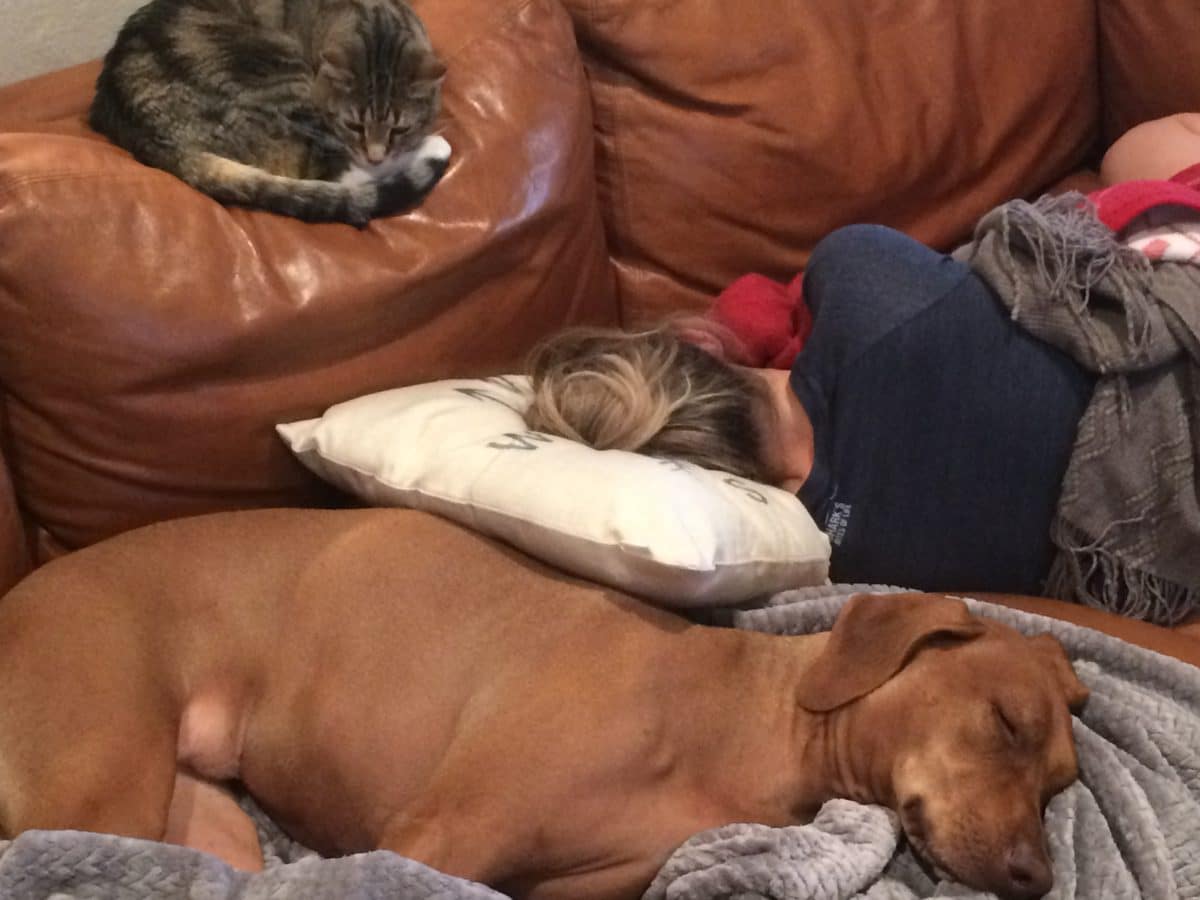 Nala doesn’t sleep in the bed with us, she sleeps in “Nalas bed” on the floor next to the bed.  Which is annoying because lately, at least three times a night we have to tell her to go to “Nalas bed.”  That’s kind of the one bad thing she does right now, wakes up at random hours of the night and needs to go outside.  Mr. Hungry always lets her out because it freaks me out to be outside in the middle of the night.  Is this normal? Are we missing something on training the dog to not go outside at night?  Yes, we give her a chance to potty right before bed every night.

Nalas current favorite activity is sunbathing and playing at the dog park.  We realized at the dog park she is kind of bully, but not intentionally.  She likes to run and chase the dogs chasing balls, but has no interest in the balls. The dogs who are chasing the balls, think that’s what she wants, but really she wants to play.  So she ends up looking a complete bully but really she just wants to play!

Her favorite food is the same as her mothers (human mother) peanut butter and banana. Dog after my own heart.

Her best friend is a miniature pony we walk past all the time. 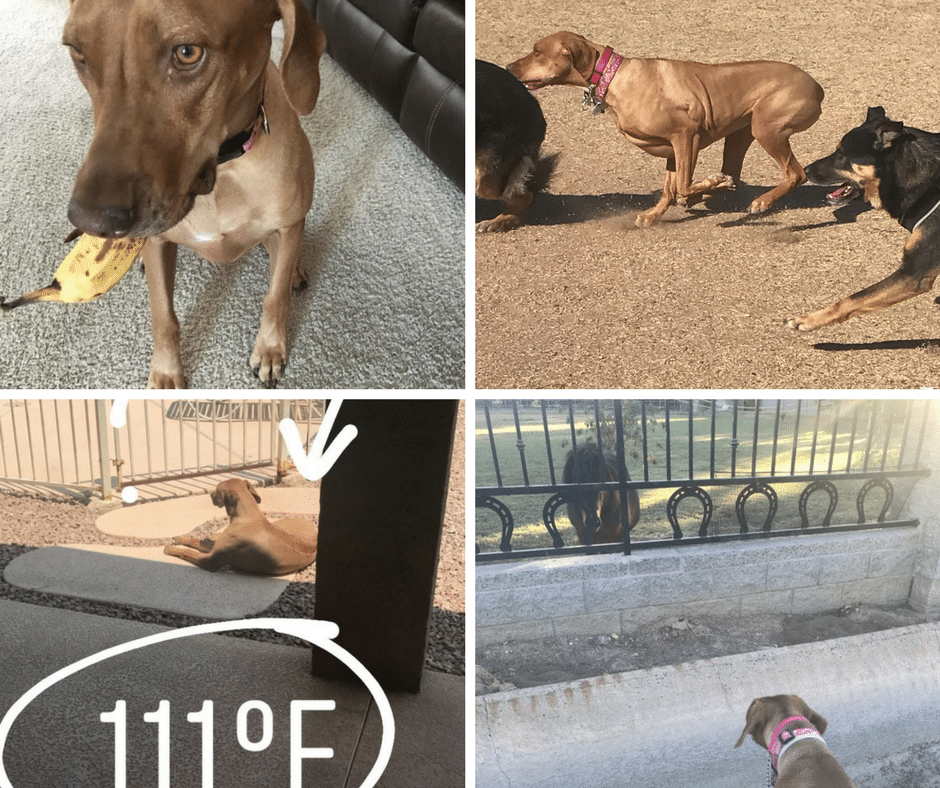 Nala almost NEVER barks.  ALMOST.  If she does bark, I always take it seriously.  For instance, she won’t bark at the delivery people, unless they hang around.  For instance, when the Amazon people take photos by the front door of the packages she goes “nuts.”  It’s crazy because she never barks, but when she does it’s such a low deep bark it always catches my attention. 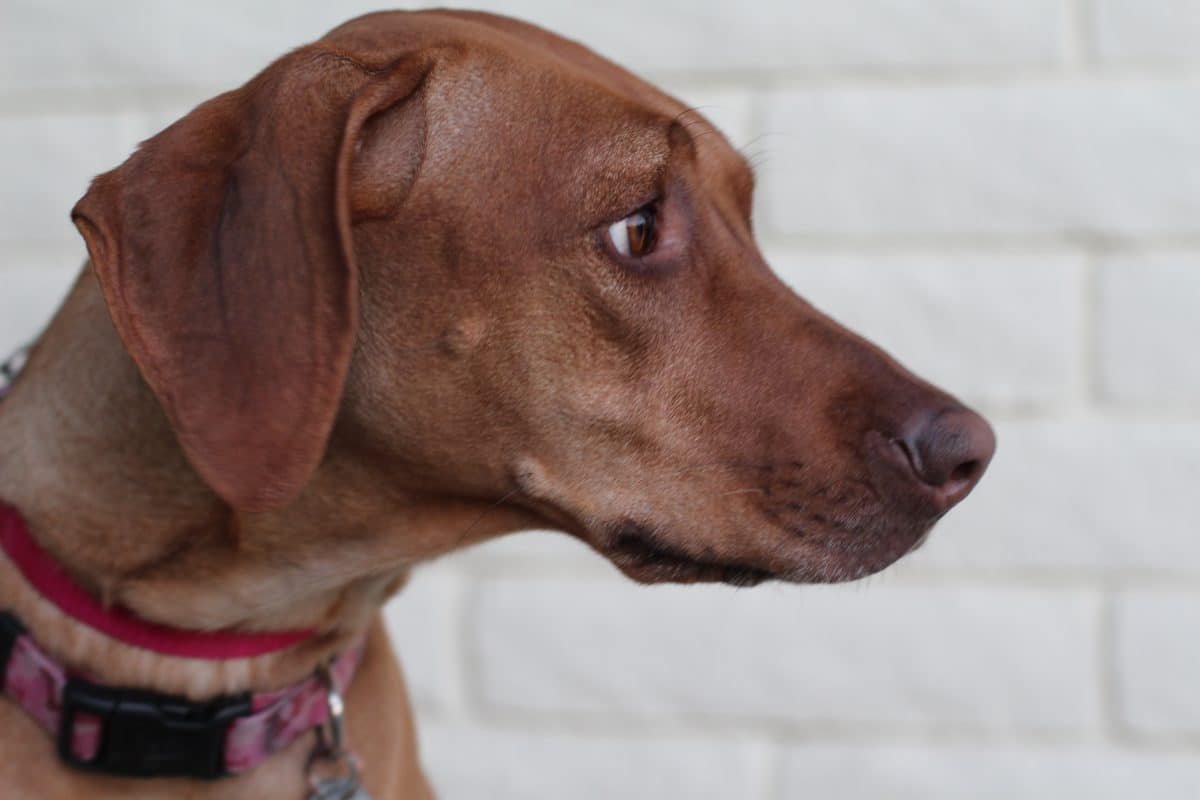 You guys, I can’t explain it but having a dog has been different than I expected.  This year, Nala was there for me so many times on an emotional level that I could not have expected or anticipated.  There is just something about someone that is always so happy to see you, whose emotions are so sincere.  Even when she gets in trouble for jumping on the counter or whatever, her sadness melts your heart.  Someone who loves to cuddle with you as long as you want to cuddle with them.  It’s unconditional emotional support and love.  Here is to many more long years with our favorite Rhodesian Ridgeback! 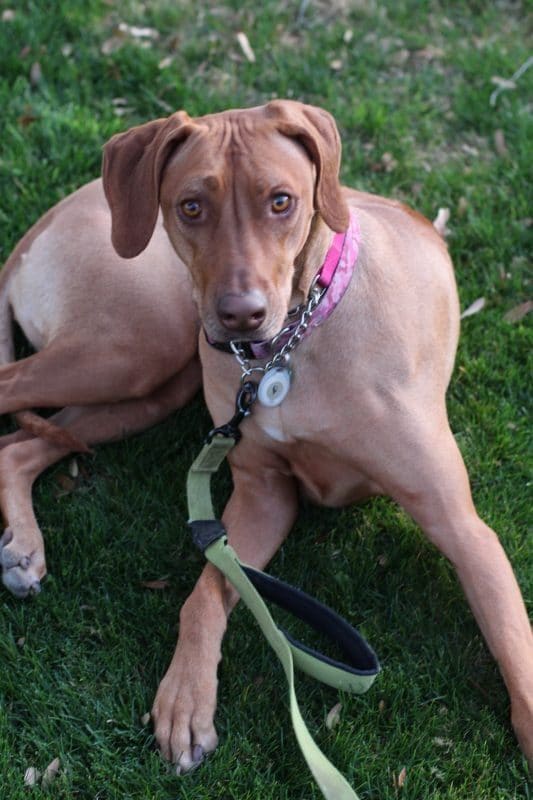