Hi, friends! How was your Labor Day weekend? Ours was a crazy whirlwind of stuff and a lot of working ahead for maternity leave. I know, I feel like I’m saying that all the time now since it’s crunch time I’m buckling down.  I want to be able to soak up as much of those first few days with the baby as possible.  Plus, we had family here last week for the baby shower, so I didn’t get that much done.

Late Friday night we hit up the pool for a late night swim that may have involved eating a drumstick for dessert as well.  It was super relaxing, I haven’t swam at night in FOREVER! 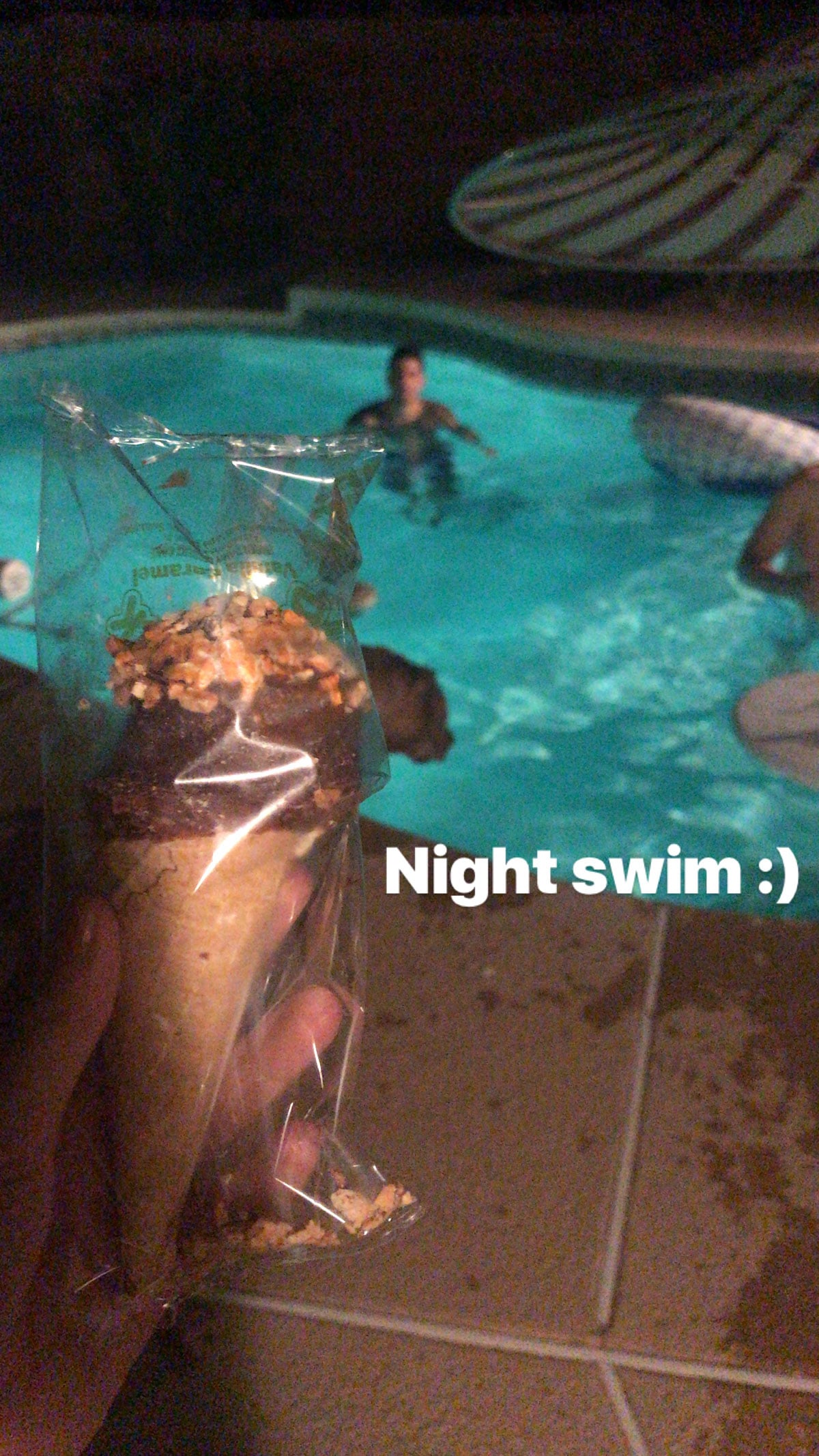 Saturday was a world wind as well.  It started with a coffee and some muesli that Bob’s Red Mill sent me to try out.  They sent me three and to be honest I didn’t care for the other two, but I LOVED this one.  Sorry, the photo is so grainy it was dark in my house! I used the Keurig to get hot water and then let it sit for 5 minutes.  It was delicious! 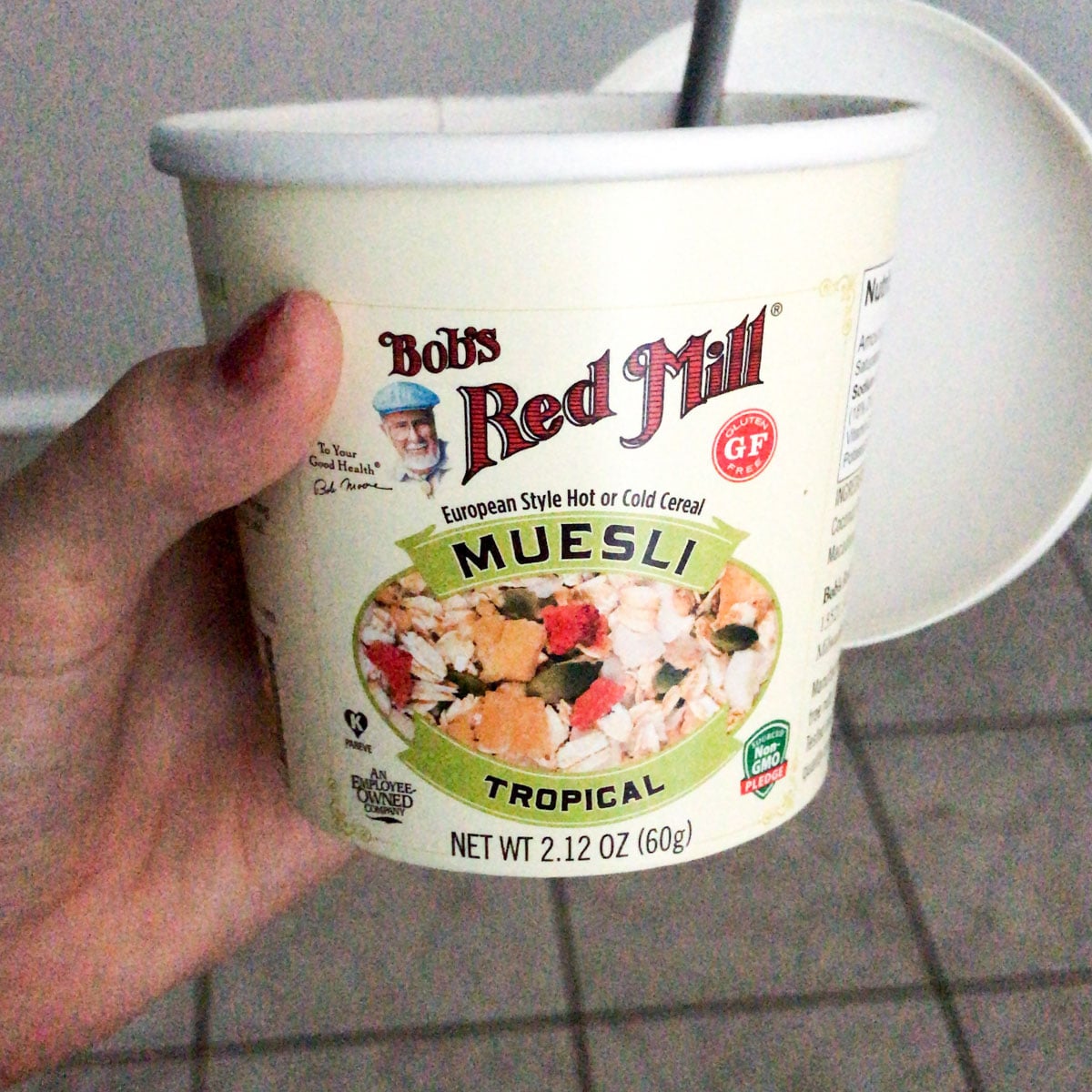 Around lunch, I went downtown for a business meeting and then worked at Starbucks for a while.  I worked a lot on Saturday, but it was 100% worth it.  Big news coming with WTE? Meal Plans later this week!  Mr. Hungry took the opportunity to hit up the driving range while I got some stuff done.

Then, on Sunday my mom and I went out to eat at Tempe Public Market.  We split a cheese pizza because I basically have the tastebuds of a four year old these days. 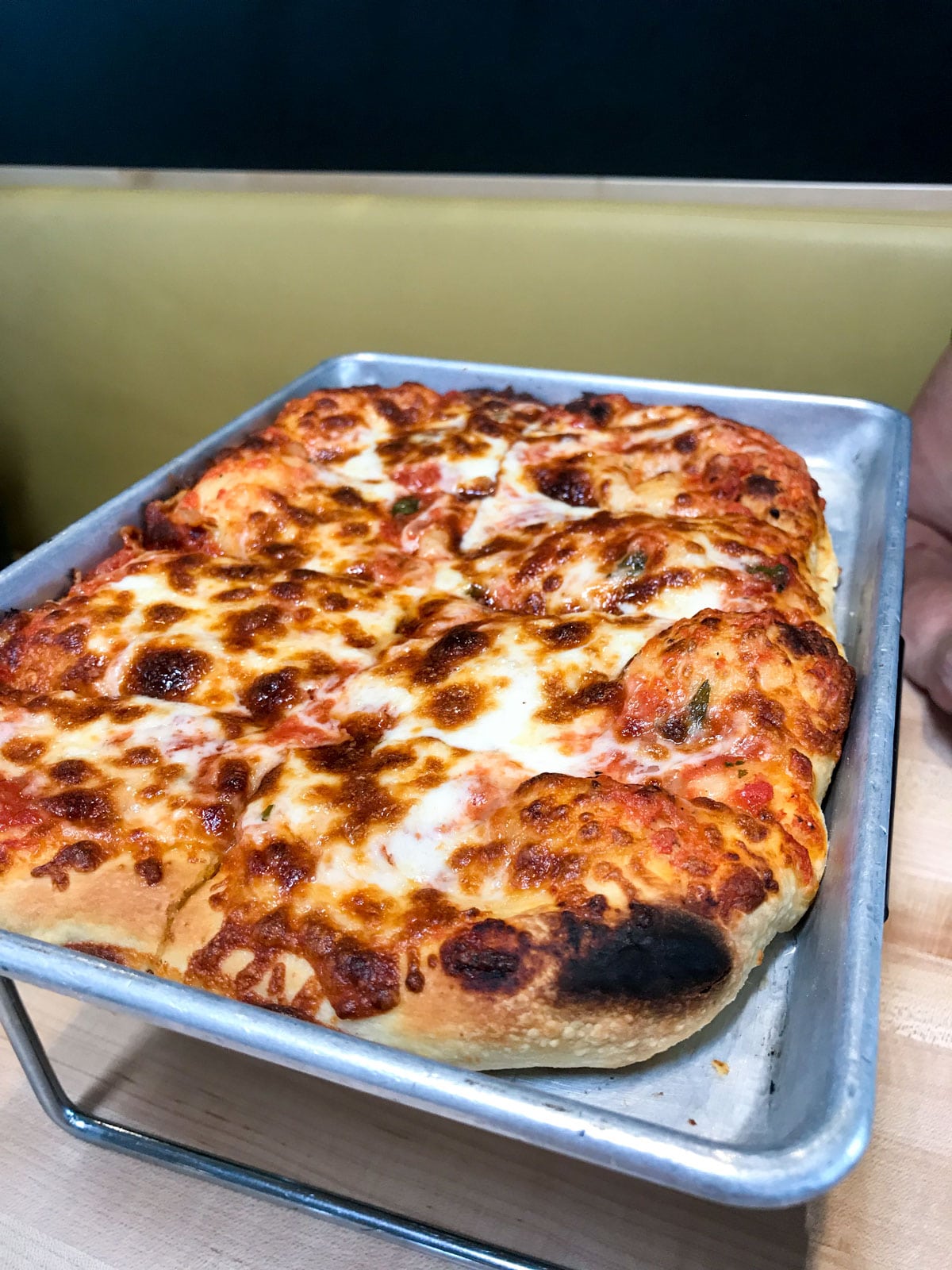 Mr. Hungry calls this “Detroit style” pizza.  I guess in Michigan they serve their pizza square and pan style like this?  I’ve only been to Michigan a couple of times and don’t think I’ve had pizza like this so I don’t know but it was GOOD!  Mr. Hungry is super into the Ozarks show right now, so I kind of half watched that with him in the evening after he got home from playing golf.

And then Monday we went to a baseball game!  It was a normal working day for me except we got to go to the Diamondbacks vs. Padres game in the evening.  I was gifted tickets by Shamrock Farms as part of my partnership with them to bring awareness to Hunger Action Month this month!  If you don’t remember from my Healthy Creamsicle Popsicle post, here is a little refresher: 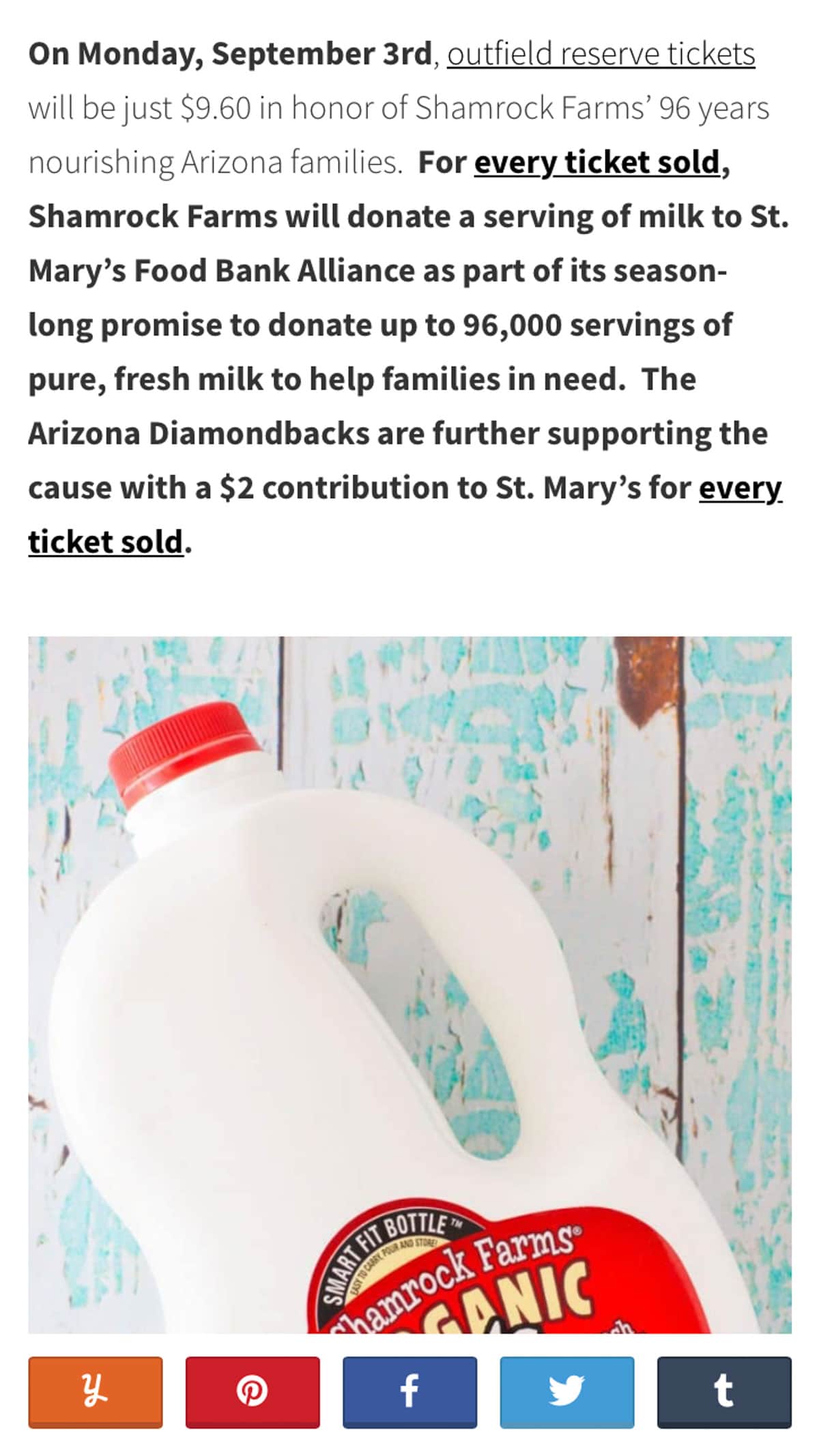 It is such a great cause; I’m so happy I got the chance to share what’s going on and to go to the game!  Mr. Hungry and I had a blast!  We are trying to do everything possible to soak up this time together since soon it will never be just us again.  People keep saying that to me, but I don’t know if it will ever really sink in that these are the last few weeks as just Paul and Kelli until they are gone. It is a weird concept because in so many ways I don’t feel like it’s just Kelli and Paul right now.  Baby kicks all the time and all the normal pregnancy uncomfortableness constantly reminds me that I am not alone. 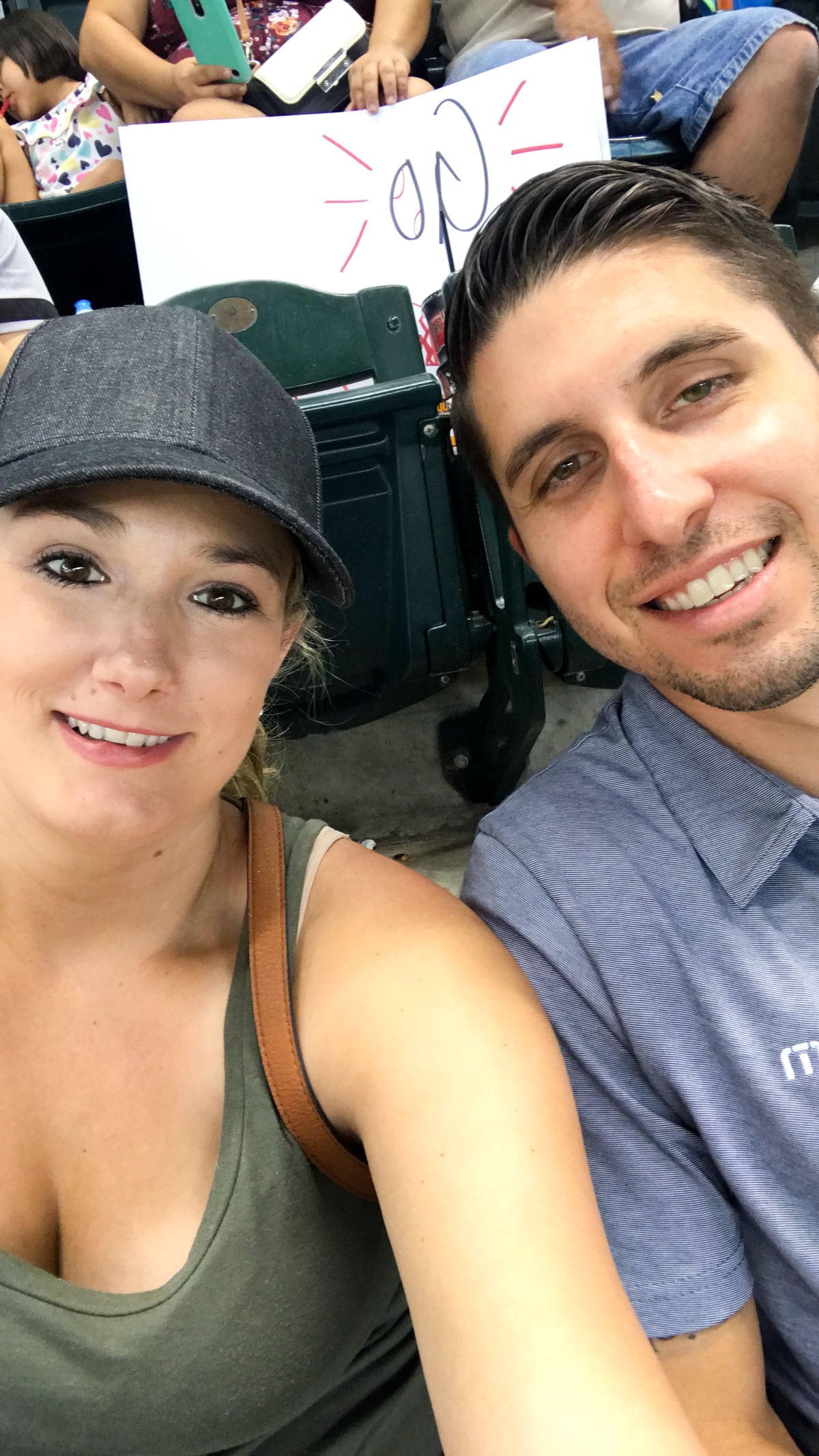 PS I ordered one of the hats I mentioned in my Friday Favorites a while back with the high ponytail cut off and I’m LOVING it!  I didn’t order the expensive one that Instagram showed me because I found a cheaper version on Amazon.   I think the quality is pretty good, but it’s a little on the big side.

Another bonus of going to the game was that one of my really good friends works security at the field, so I got to say hi to him as well! He was recently awarded employee of the month and is up for rookie of the year, so proud of him! 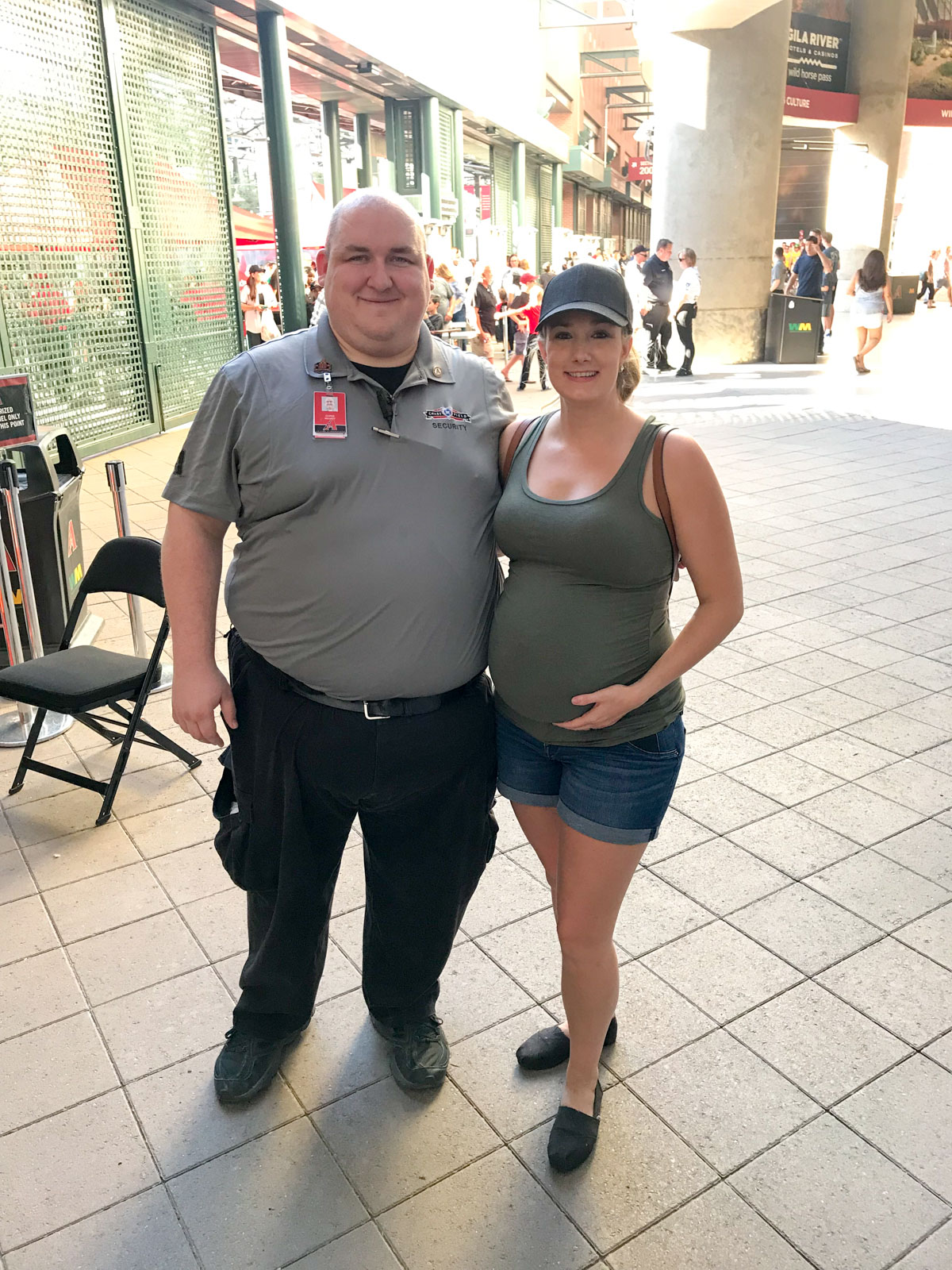 I loved going to the game, but I have to say I did miss the beer!  I will also say that going to events this late in the game of pregnancy is no joke.  Um, hello I think I went to the bathroom ten times while we were in the stadium, it felt like a lot!  Oh well, just a few more weeks right?!?!?!

How was your Labor Day weekend?  Did you work, have it off, or a mix like me?  Go anywhere fun?