Keeping suit with the start of every update, I can’t believe you are three years old.  I found the transition between 2 to 3 years old as jarring as the transition from newborn to 1-year-old toddler.  Just as a baby becomes a toddler in that first year, this last year, a toddler becomes a preschooler, and as I said, the transition was rocky, beautiful, and happened all too fast.  I haven’t done an update since KJ was 2.5 years old, so I figured I’d do another one.  I probably won’t do many updates as he gets older, but I wanted to do one for his birthday!

There is nothing like having another baby to make you realize the specific personality traits of your first that you may have taken for granted.  KJ is energetic, sweet-natured, loving, and incredibly strong-willed. In addition, he’s a mover and shaker, a doer that loves to be involved in anything and everything you’re doing.  Looking back, I can recognize some of these traits in him as a baby that I don’t necessarily see in KK right now.  For instance, by five months old, KJ could bounce himself in the bouncer kind of intensely ha ha whereas KK is mostly content hanging out watching the world around him in the bouncer.  I used to call KJ happy feet because his feet were constantly moving, and they still are!

KJs always had strong preferences, I now realize since he was a baby (like hating tummy time) and now he can voice them. And maybe it’s because we had to wait longer than “typical” to hear his thoughts, but man I love talking with him.  Just talking about the weather, the lizards he sees on the wall, hearing what he’s observing and thinking, I love it all.  I stopped to myself and think several times a day how lucky I am to be his Mama when he’s talking to me! It also helps to remember how appreciative I am of his speech when he’s in the middle of a meltdown.  The good with the bad, right? 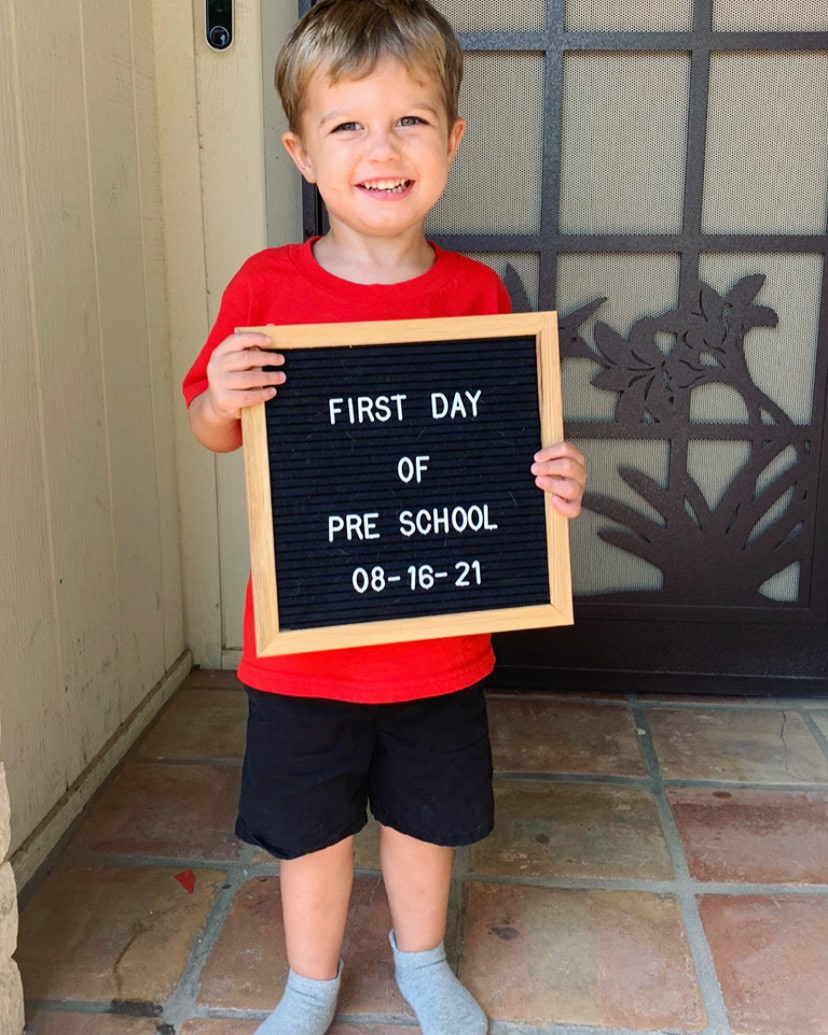 Speaking of turning into a preschooler, we enrolled KJ in a preschool down the street twice a week for 2.5 hours.  So, it’s minimal “preschool” but, we like the teachers, and it takes me 8 minutes to walk there.  We initially enrolled him to help foster his speech capabilities.  (KJ had a speech delay that initially measured him a whole year behind in expressive speech at two years old (on par for comprehension), so he did speech therapy for about six months which caught him up.

We thought it would be good to continue to foster his speech by enrolling him in preschool.  In addition, KJ, as a COVID kid, was initially shy and timid around other children. So we hoped preschool would help socialize him a bit, which it totally has.  The initial week or two was difficult, with lots of intense tears, but now he happily says “ba-bye Mama” and runs over to play with anything with wheels.

So, it’s been going well, and as a side benefit, I think it’s been good for him to have something he goes and does of his own – aka without the baby. 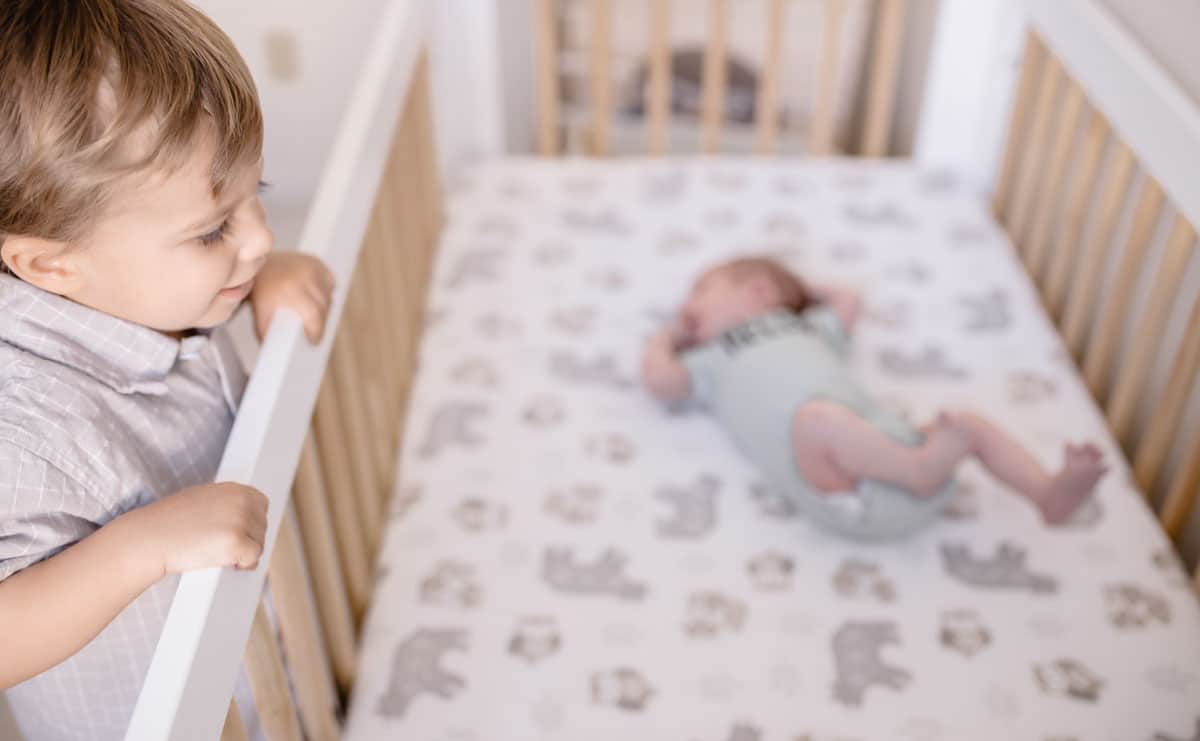 KJ is very sweet to kids younger than him.  Just the other day a Mom told me that after I had left and she was dropping her son off in the same class and that her baby started to fuss and KJ sweetly swooped in and was gently petting his legs and making funny noises. He loves to bring his baby brother toys and make funny noises to make him laugh.  When he cries, he will tell me, “Mama, he’s hungee, Mama, you feed him.”  Or “Mama, he’s a little fussy. He needs a nap.”  As the baby gets more mobile and more interactive, we have to coach him to be gentle.  He wants to play and can be a little too rough, mainly when the baby is in the bouncer or swing. We have to keep a close eye, or he will try to bounce him or swing him a little too hard.  Overall though, he acknowledges that KJ is a “member of the family” and often says “bring KK” when we are transitioning rooms, which I love. 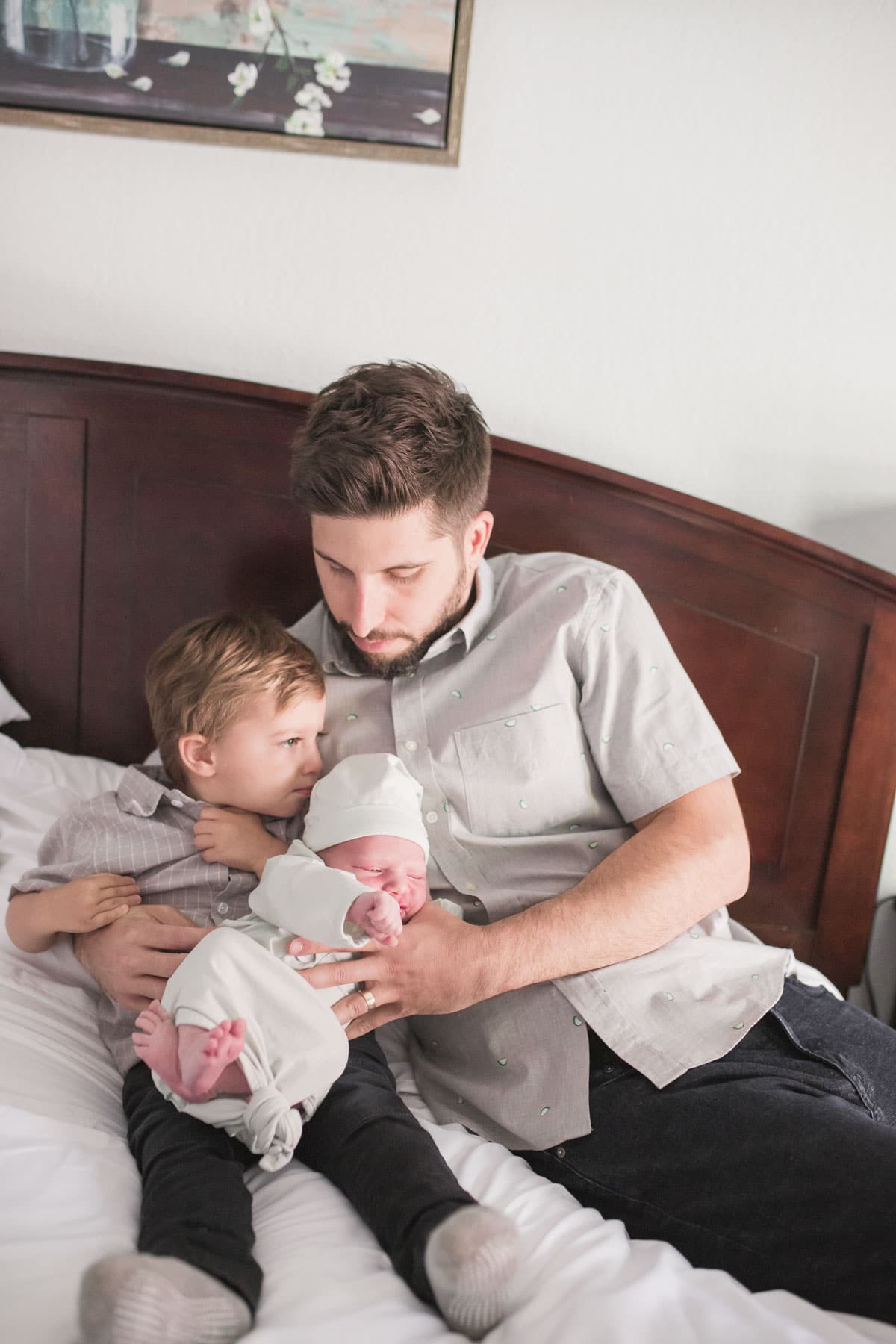 The initial transition was a whirlwind, and about 4-6 weeks in KJ had a significant sleep regression.  After years of almost flawless sleep, life was in chaos.  The baby was sleeping 6 to 8 hours a night, but we were having trouble getting KJ to go to sleep, and he was waking up and crying all night.  At one point we dropped his mattress to the floor because he was trying to climb out of his crib. Finally, I realized that our approach wasn’t working, and doing the same thing repeatedly, expecting a different result, is the definition of insanity. So I purchased the LittleZSleep Program for kids up to 3 years old, we followed the program and ended up having to drop his nap, but now he’s usually in bed 630 to 630.  It took us about six weeks to drop the nap and get to normal bedtime (we had to put him to bed at 5 PM for a while), but eventually, he adjusted, and bedtime no longer makes me anxious.

KJ has thankfully always been great with poop.  He recently went through a couple of days where he had a few accidents because he wouldn’t stop playing to go and thought the whole thing was hilarious #boypottyhumor.  I went with my gut and told him that he would lose his trash truck for a while if he pooped in his pants. We haven’t had an accident since.

He’s usually pretty great with the potty on trips or when we are out of the house. However, inside the house, he tends to dribble a quarter size amount before making it to the potty.  I think this is also an issue of holding off because he’d rather play because when he’s motivated, aka has M and M’s, or for a while, we had the no accident cranberry dance, he will go a straight week with zero accident.  Then he gets bored of the reward and goes back to having them at least once a day.  I recently removed all rewards (he was getting dried cranberries for no accidents.)  I don’t want to make him anxious by losing a car when he has accidents, but I recognize he needs an extra push to listen to his internal cues.  And I think it’s interesting that out of the house, he rarely has an accident.  So that’s where we are at. I assume and hope he will eventually outgrow these minor little dribble accidents. 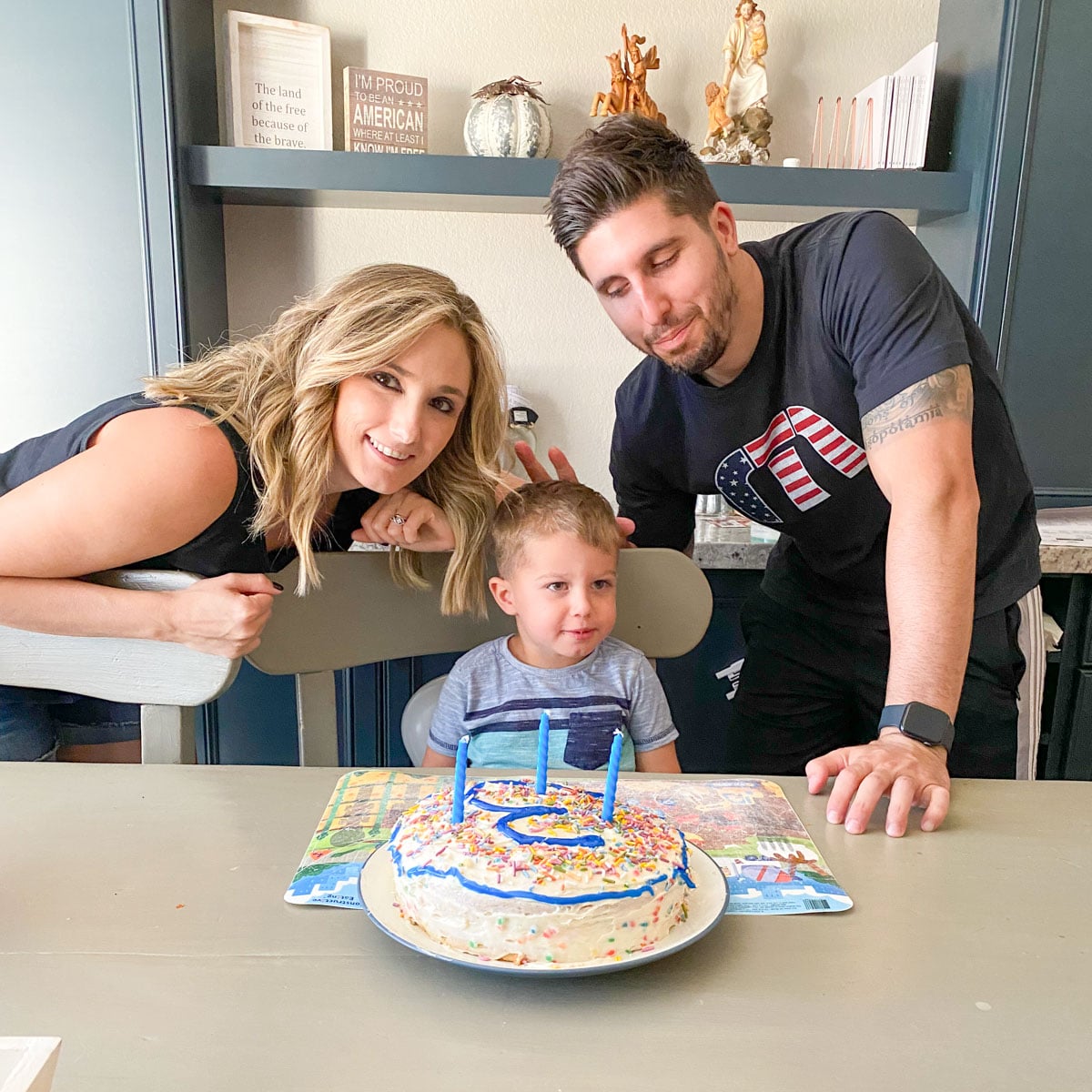 KJ has thankfully grown out of ALL his MSPI sensitivities and can have milk, soy, and eggs without issue!  It’s fantastic, especially him eating eggs and birthday cake of course!

For a long time, I practiced the “serve one thing they like” along with everything else on their plate rule.  And for a long time, he ate fruit or crackers for dinner because that was the “one thing.”  With KK, I will not do that. I will only put on his plate what we are eating and no substitutions. Because for a long time, I mean a long, long, long time, he ate only that one thing, and I assumed he’d grow out of it, but we didn’t seem to be making any progress.  And snacks were kind of a constant power struggle, any time he was bored, frustrated, needed attention, or maybe actually hungry. He’d hit the snack cabinet and ask for something. And recently, I read two books – Bringing Up Bebe and French Kids Eat Everything (<—– can’t recommend this one enough.)

I’d been pretty good about some things mentioned in those books but had some room for improvement. The first thing I did was put him on a meal and snack schedule, and within 48 hours, he was eating real food again.  I also stopped adding that “one thing” to his plate.  If it wasn’t on our plate, he wasn’t getting it on his plate. Now, he eats breakfast, then a snack 1-2 hours later, and lunch is at least 3 hours following the snack.  That means on preschool days, when they have their snack at 1015am, we push back lunch to 1 pm unless it’s obvious he didn’t eat anything of what he was served at preschool snack.  He gets one snack in the afternoon after quiet time at 230 and then nothing till dinner at 530pm.  It’s not perfect, but like I said, he’s now eating a lot more real food than he used to.

Although he did go through a carb phase where he ate a lot of bread and fruit, nowadays, his favorite foods are protein foods like chicken, hot dogs, eggs, pork carnitas, burger, etc., which I’m thankful for.  He doesn’t really like pasta or pizza, rice, potatoes, or crackers anymore.  (Don’t worry, french fries and candy are still a favorite.) He hasn’t eaten any vegetables (not in a smoothie) in over six months. Still, recently we implemented a tasting rule, which helped him discover or remember he does, in fact, like some vegetables like broccoli. He’s kind of picky with fruit but loves applesauce in a pouch. Again, it isn’t perfect, but I’m happy with his progress!

Typical Day In the Life of KJ 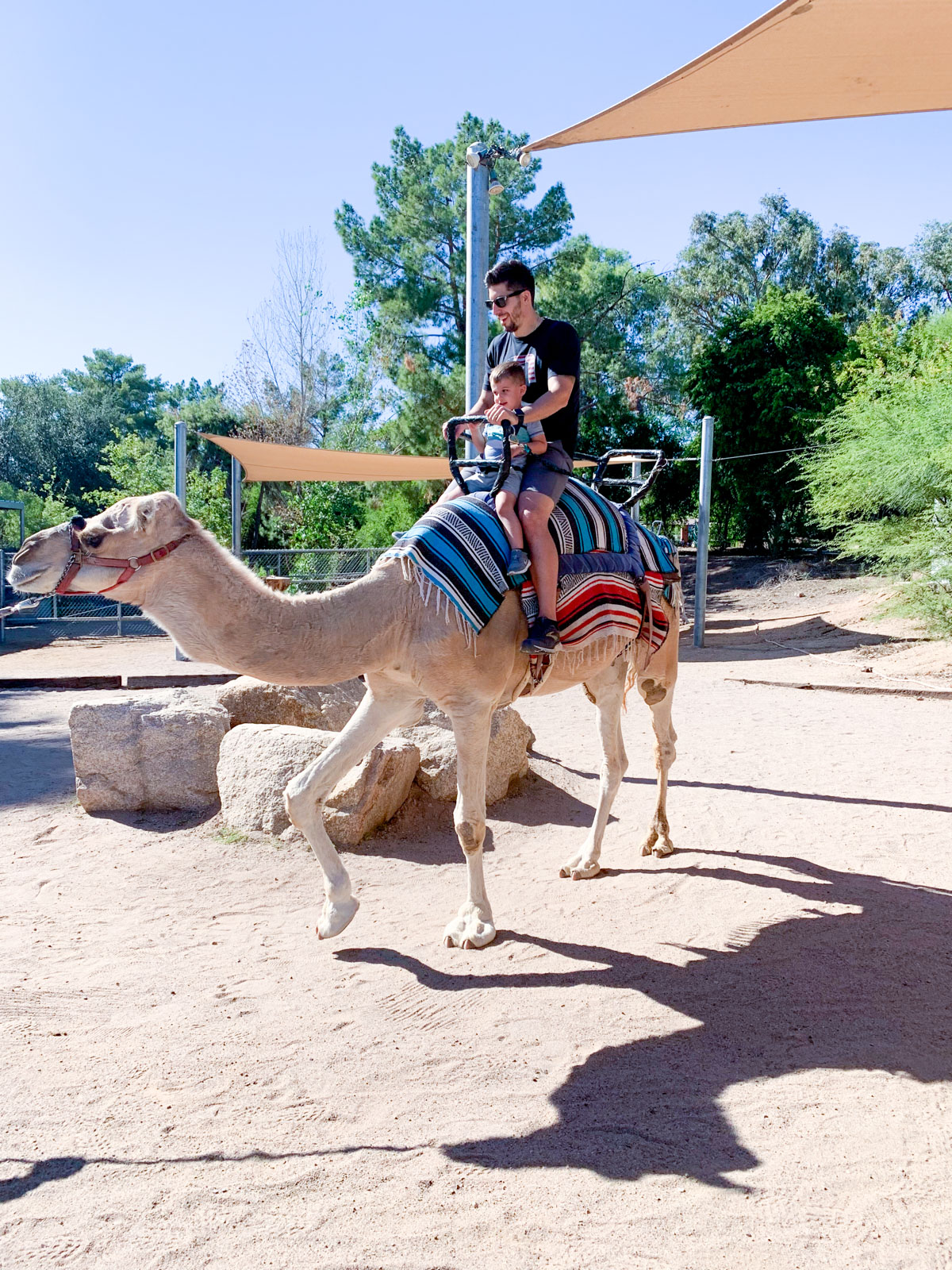 That’s it for now! Thanks again for following along, back to our regularly scheduled program tomorrow!