This post is about a month late, but I wanted to wait till after his 18-month well visit, which was on Tuesday!

I can’t believe I haven’t done an update on him since he was 12 months, and now I wish I would have done a 15-month update. Oh, well, I can’t go back! 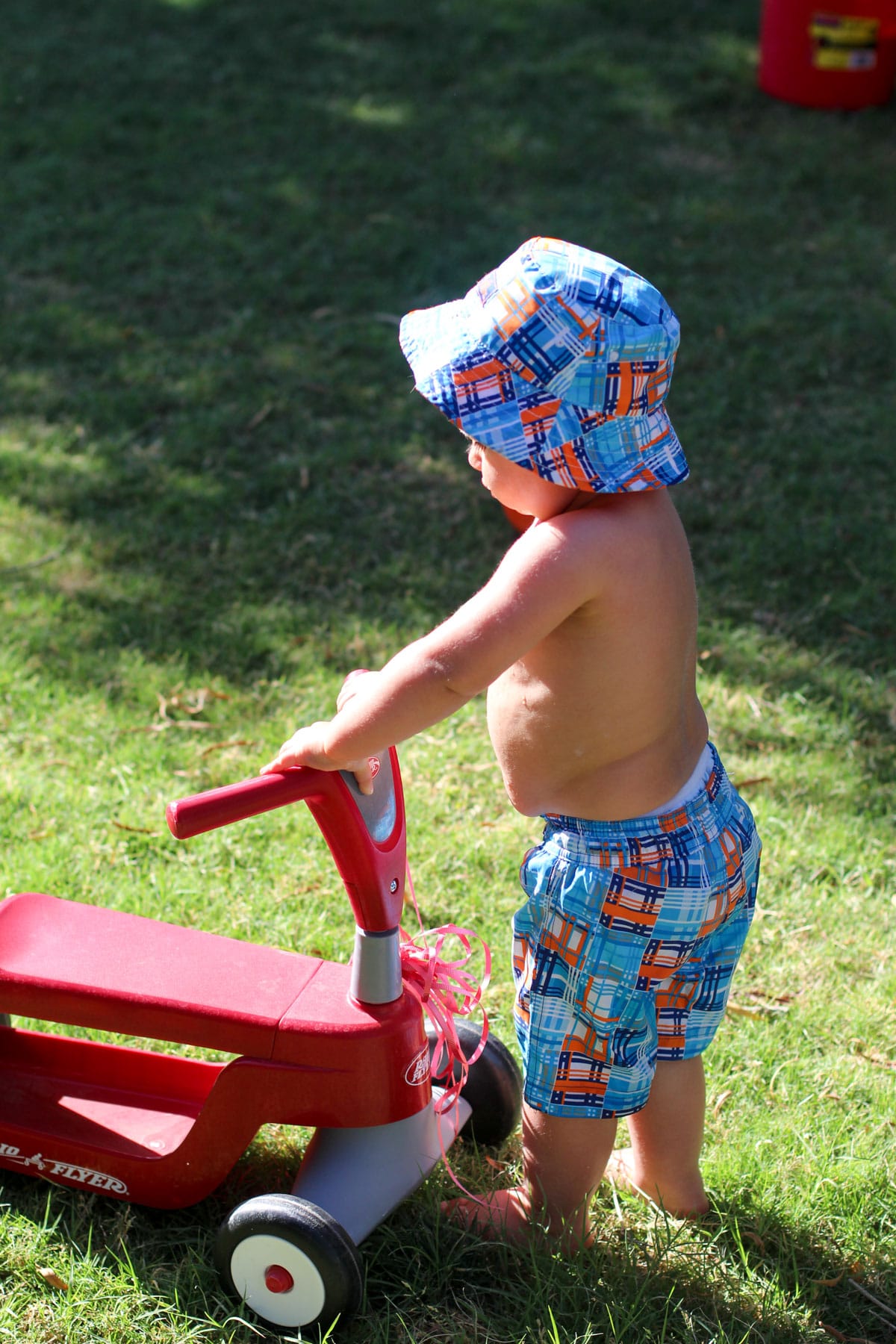 He’s so funny. He loves lights and fans. He wants all fans on and all lights off all the time. I think this is Mr. Hungry’s dream come true, so they must have been in cahoots.

He is SOOOO lovey. He loves to give kisses and hugs. If you aren’t looking at him while holding him, he will lean his body over, tilt his head in front of yours, and smile until you look him in the eyes. I’m not describing it as cute as it, but it’s adorable. He also likes to dive bomb on top of anyone who will let him. 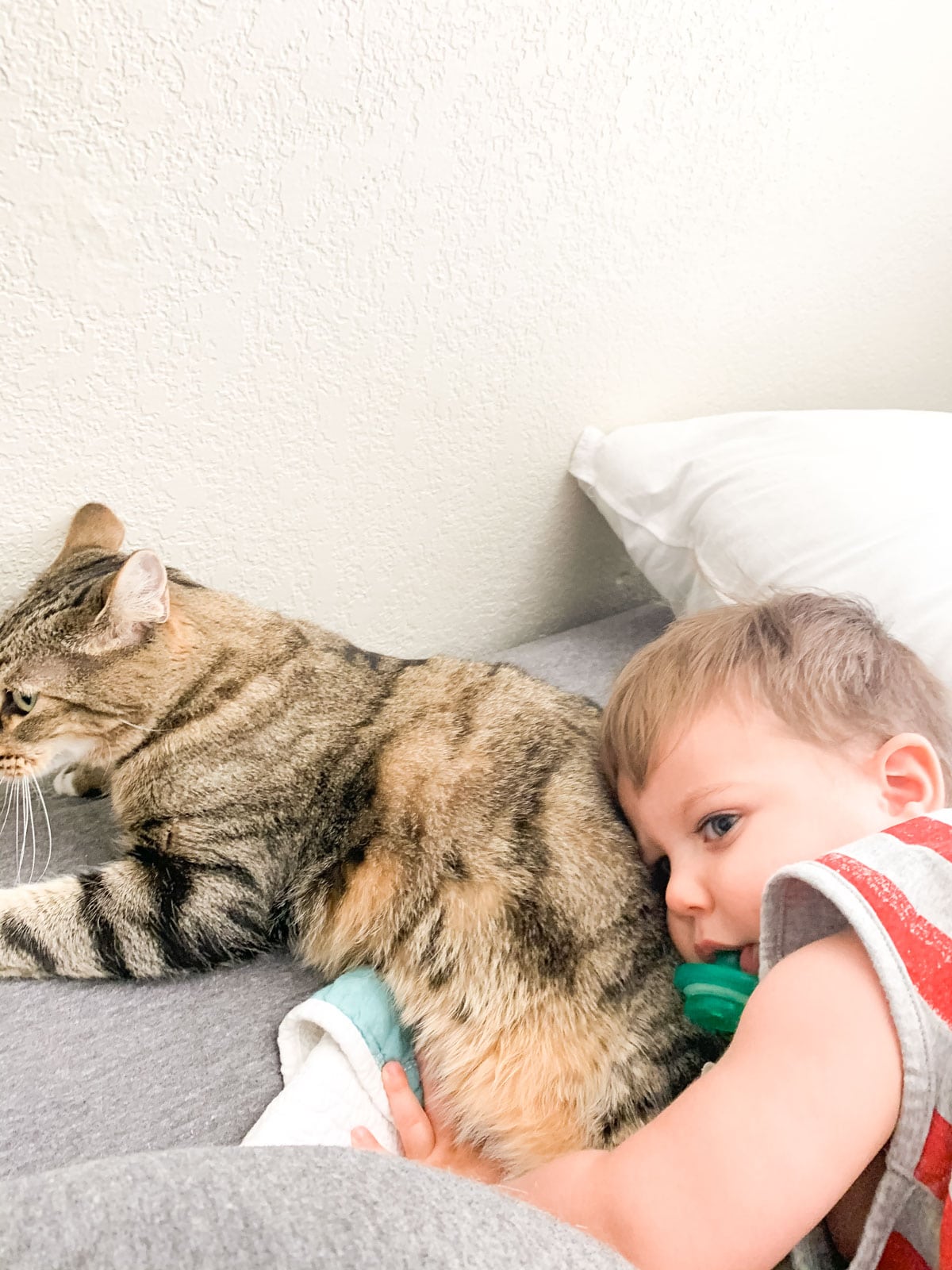 Speaking of dive-bombing, he’s crawling on the couch a ton. So, we throw pillows on the ground and make a pillow pile for him. I’m thinking about purchasing a nugget comfort set, but it’s pricey. If you have one, I’d love to know what you think!  I’ve heard people love them!

We are also working on gentle with pets.  He can’t catch Missy, so we really focus our efforts on teaching positive interactions with Nala.  I know Nala loves the extra treats, that’s for sure!

He has little stations around the house with lots of toys, and for the most part, our current favorites are:

I’m also super glad we have that walker toy from when he was only six months old because he uses that when he wants to run around and push something around the house versus a chair, or other larger heavier objects.

All that is good and well, but his favorite spot to be is outside. That kid LOVES the water table he got from Grandma and Grandpa. 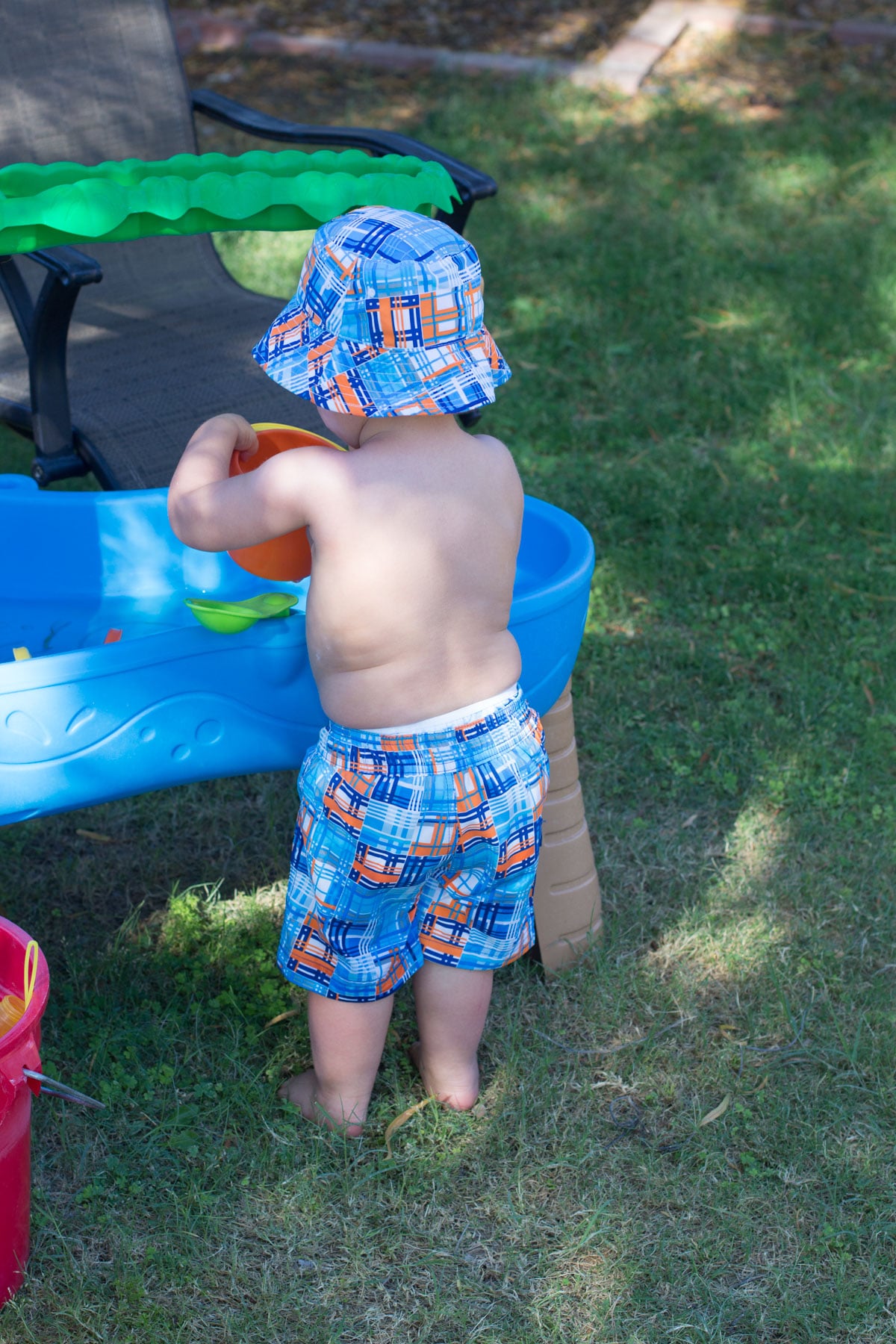 A couple of days ago I got him a little play slide (since I wasn’t sure about the parks and all that) and he LOVES it. For starters, they keep closing and reopening them here. 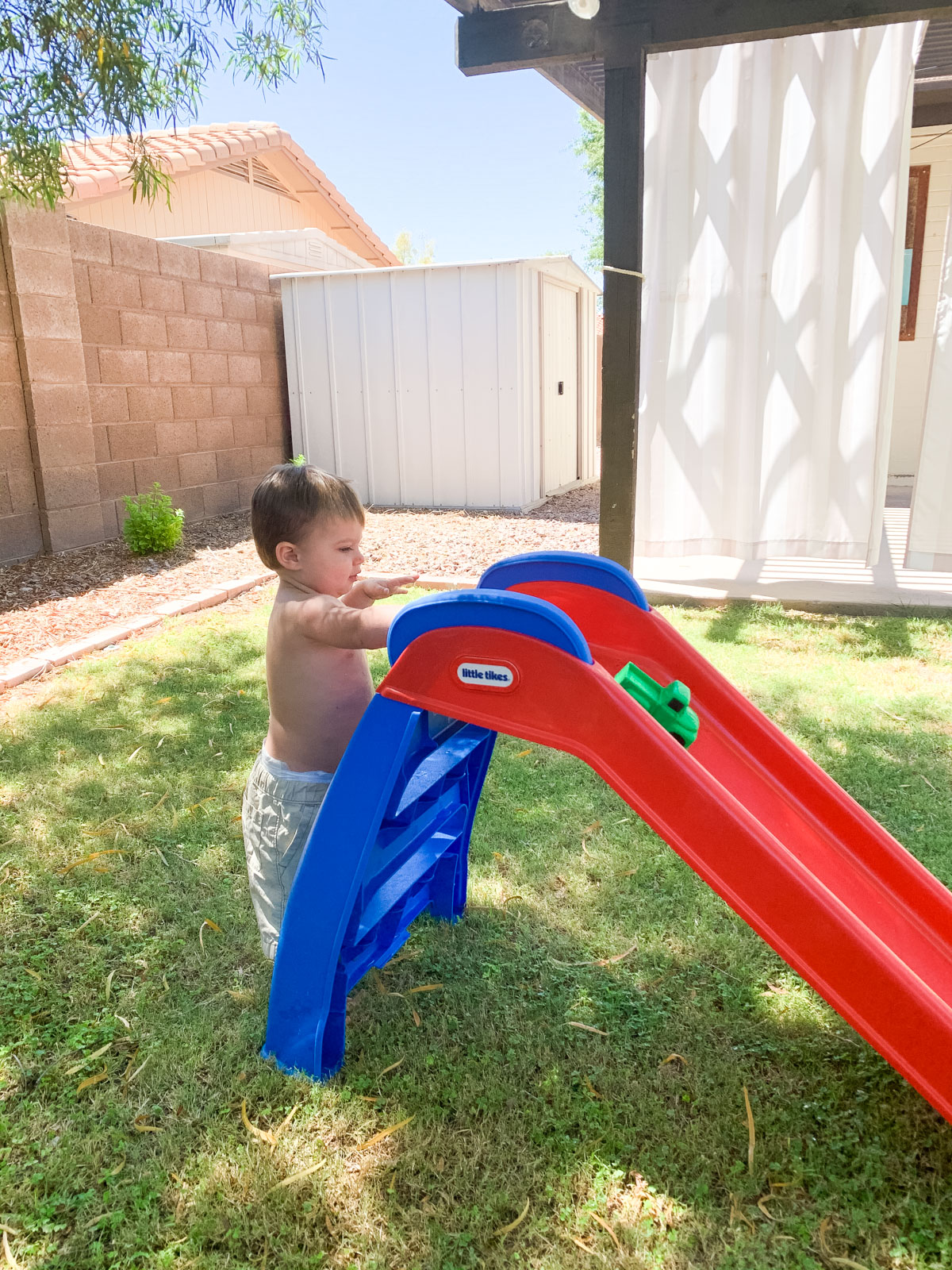 Heads up though, it’s plastic and for tiny tots only (lightweight plastic material.) He also loves to swim in the pool with Mom and Daddy. He is already kicking around and will somewhat lie on his back.

Let me elaborate on that last part. He can speak, but most of the time, choose not to. He will often repeat words once like apple, jet, and turtle, but then not use them again or repeat them when asked. It’s bizarre. The only words he says regularly are uh oh and mmmmmhmmmm (for yes.)

He signs more for more, and please, he also signs all done and shakes his head no when he doesn’t want something. He does not say Mama and Dadda, but if you ask him where Mama is, he will point to me. The weird thing is that he used to have a whole bunch of words like 10 of them I have recorded in an old post. As he got more active, he dropped them one by one.

At our pediatrician’s appointment this week, he said take the binky away entirely (right now he gets it at naps, nighttime, stroller, and car) and call in 3-months to let us know the progress. He offered a speech referral, but after some discussion, we agreed on the wait-and-see approach.

KJ passes every other evaluation, hears fine, and interacts normally, but doesn’t talk (I mean not so I can understand anyway.) Mr. Hungry didn’t speak much either till he was 2.5 and did have to do some speech therapy work – just a session or two. So we will see. Of course, I worry, and then I’m fine, and then I worry more, but I guess that’s my job as a mom.

Speaking of his pediatrician’s appointment, KJ is on the 60th percentile for weight and height. Man, we’ve sure come a long way from that 10th% for weight baby. He was 33.5 inches and 27lbs, big boy! He’s about ready to outgrow his car seat, which goes up to 35 inches and 35lbs. To say the least, he’s a good (but picky) eater!

I know many of you are wondering about his MSPI. He seems to tolerate small amounts of dairy, but the problem is he won’t eat it. He doesn’t love yogurt and thinks cheese is poison (poor, poor baby doesn’t know better.) He, in general, doesn’t love new foods, and since dairy hasn’t been a staple in his diet, I’m not sure how long it will be till we can regularly incorporate dairy into his diet. I have not tried eggs. Given the family history, I’m not in any rush. (Both Daddy and Grandpa don’t do well them.)

Some of his favorite foods are old staples:

He doesn’t like anything new, particularly, dairy, so many veggies he used to love, or turkey anything. Salmon is now hit or miss, but some days he will eat it, so I consider that win. He also doesn’t like the homemade baby hummus he used to devour. Without eggs, yogurt, or cheese, I’ve done my best to create a variety of meals, but it’s hard. I’m planning to share a bunch of dairy-free toddler meals soon, though.

Other than that, life with a toddler has some crazy ups and downs. Toddler tantrums and “disagreements” are the most insane laughable event ever. Everything takes a little longer. Everything needs to be explained, and my patience is always on the brink. At the same time, the giggles, the cuddles, and the learning are more fun than I could ever imagine.

It’s been real interesting, real challenging, and real fun, especially in quarantine. I can’t wait to see what the next few months bring!