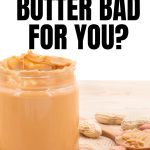 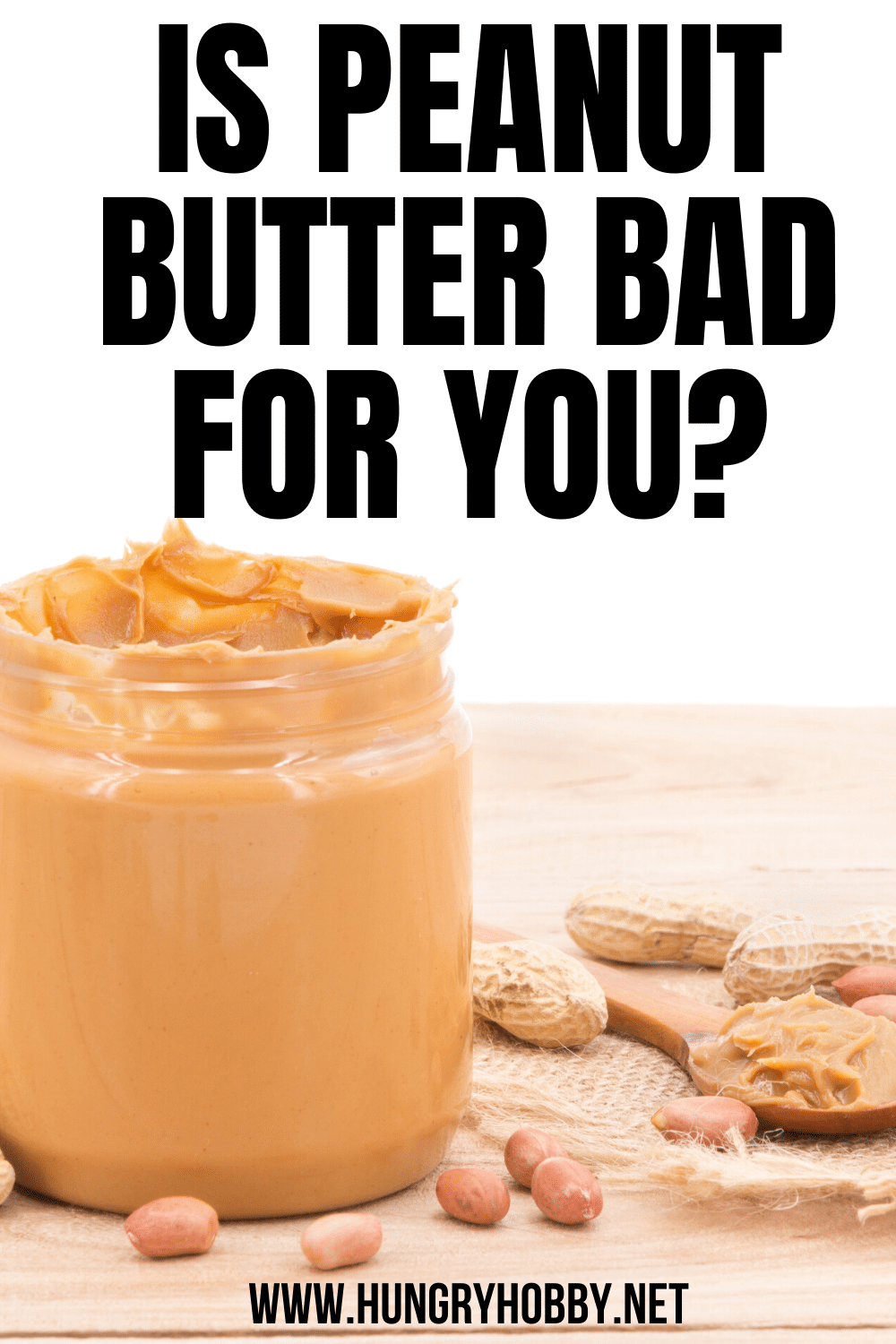 Creamy, delicious, peanut butter.  How you’ve been unfairly attacked, but I’m here to set the record straight.  Well, for most people, that is.

Read on, and I’ll explain.

So peanut butter is just ground up peanuts, right?

The answer is, usually, not.

With us all eating more shelf-stable foods, like peanut butter, I thought I’d take a deep dive into this one today to find out all about peanut butter and if it’s healthy. Let’s get to it!

What is Peanut Butter? 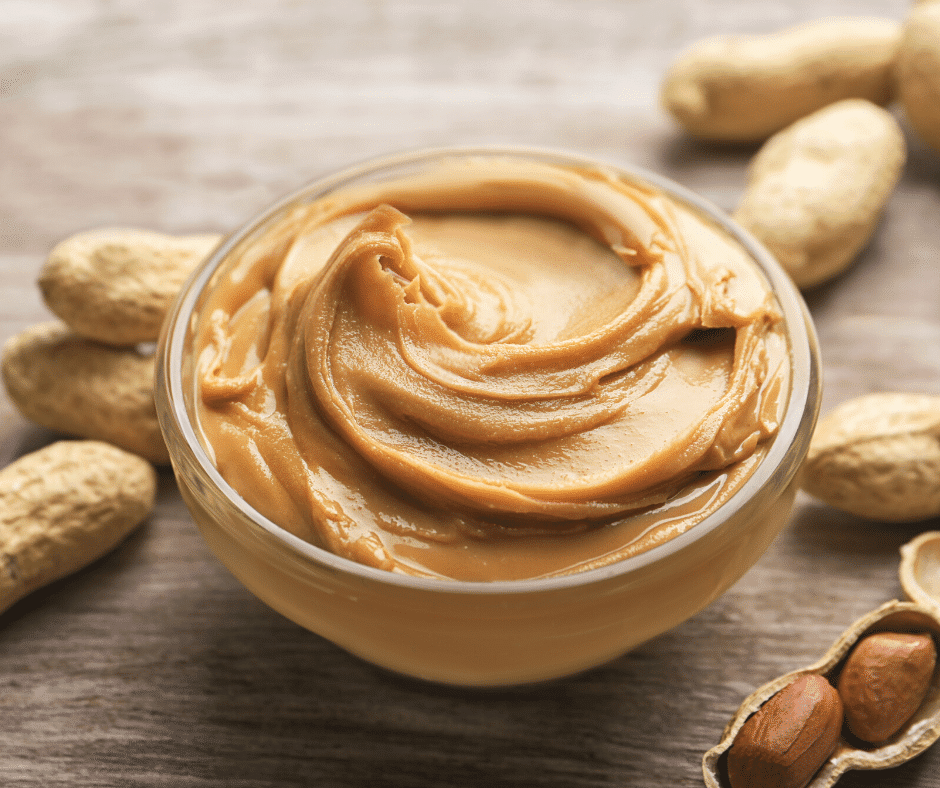 Peanut butter often has oils, sugar, salt, and even preservatives added to it for various reasons, including taste, texture, or stability.  In general, you want to avoid these if possible or educate yourself about the types of oil you’ll be okay with your diet.

For instance, some manufacturers add palm oil or coconut oil to help increase shelf stability.  Others add oils that I’m less okay with, like hydrogenated oils and others.  Read the label carefully. If it has too many added ingredients, it will be called peanut spread instead of peanut butter.  And if you don’t want to take a deep dive into the ingredient list, pick the one that has peanuts as it’s the only ingredient as the healthiest option.

While most people consider peanut butter a high protein food, I do not.  Per two tablespoons, you get seven-ish grams of protein and about 190 calories.  Compare that to the equivalent in calories of a chicken breast or slice of tofu that clock in around 20 grams of protein, and you’ll see why I don’t consider peanut butter a high protein food given the number of calories it contains.  I like to think of the protein as a bonus to this source of healthy fats.  (Read What are the Best Healthy Protein Sources) 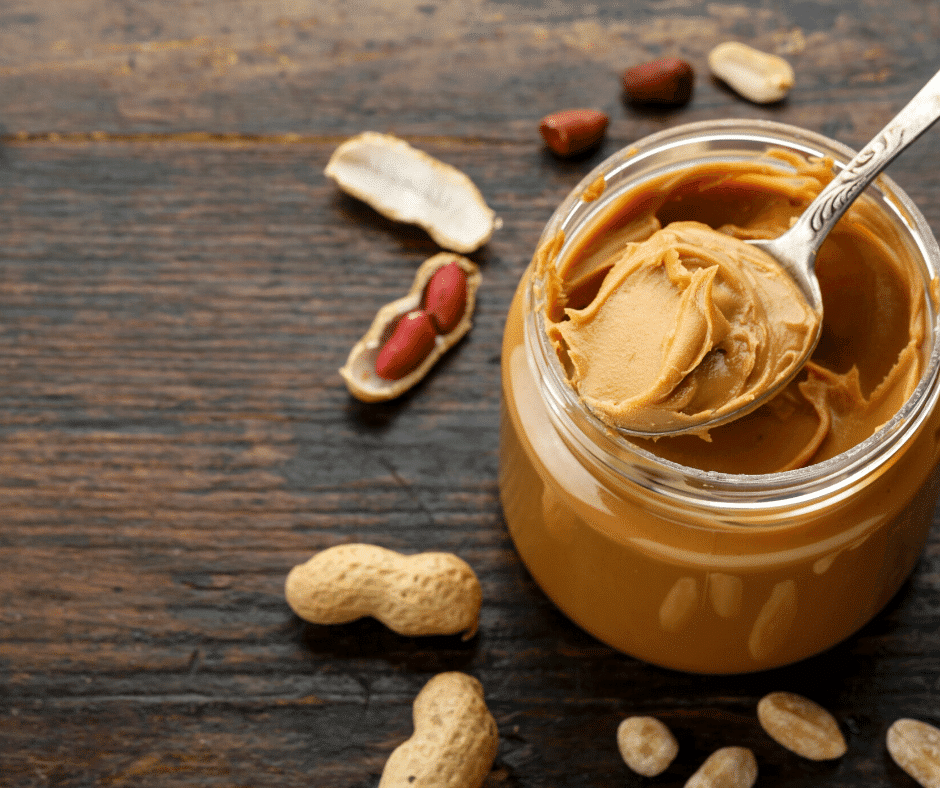 Fat composes every single cell membranes in our body. It’s needed for hormone production, energy production, and helps to keep us full.  Fat with a meal is directly related to the production of satiety hormones tell you that you are full, this is a good thing!

Over half of the fat in peanut butter is monounsaturated fat, the same type of fat that is abundant in the Mediterranean diet and that found in olives, avocados, and almonds.  Less than 20% of the fat from peanut butter comes from saturated fat.  Saturated fat, especially from plant sources, doesn’t scare me.  Research shows that saturated fat does raise your cholesterol, but also might make it less dangerous.

The other roughly 30% comes from Omega-6 fatty acids, which can be neutral or inflammatory in nature, depending on the amount you intake and other factors, especially if they are not balanced with a high intake of omega-three fatty acids.  The average diet contains a 20:1 ratio of omega 6:omega 3 when optimal is probably closer to 4:1. (See fighting inflammation with Omega 3 Rich Food.)

My thoughts are that omega-six fatty acids are only detrimental when intake gets out of control.  So it’s when we start taking in a bunch of added sources of omega six that becomes a problem.  In other words, I’d rather you eat your peanut butter and limit your intake of chips fried in soybean oil, than visa versa.

Peanut butter is a natural source of omega 6’s, frying potatoes in soybean oil would be an added source.  For example, the sugar found in a strawberry is natural, but if you dip that strawberry in melted chocolate, that’s added sugar.  (Another reason to read your ingredient list and make sure they don’t add highly processed omega-six based oils to the peanut butter.)

Overall, peanut butter is a delicious source of healthy fat, which is essential to our health.  (See how to eat more healthy fat.) 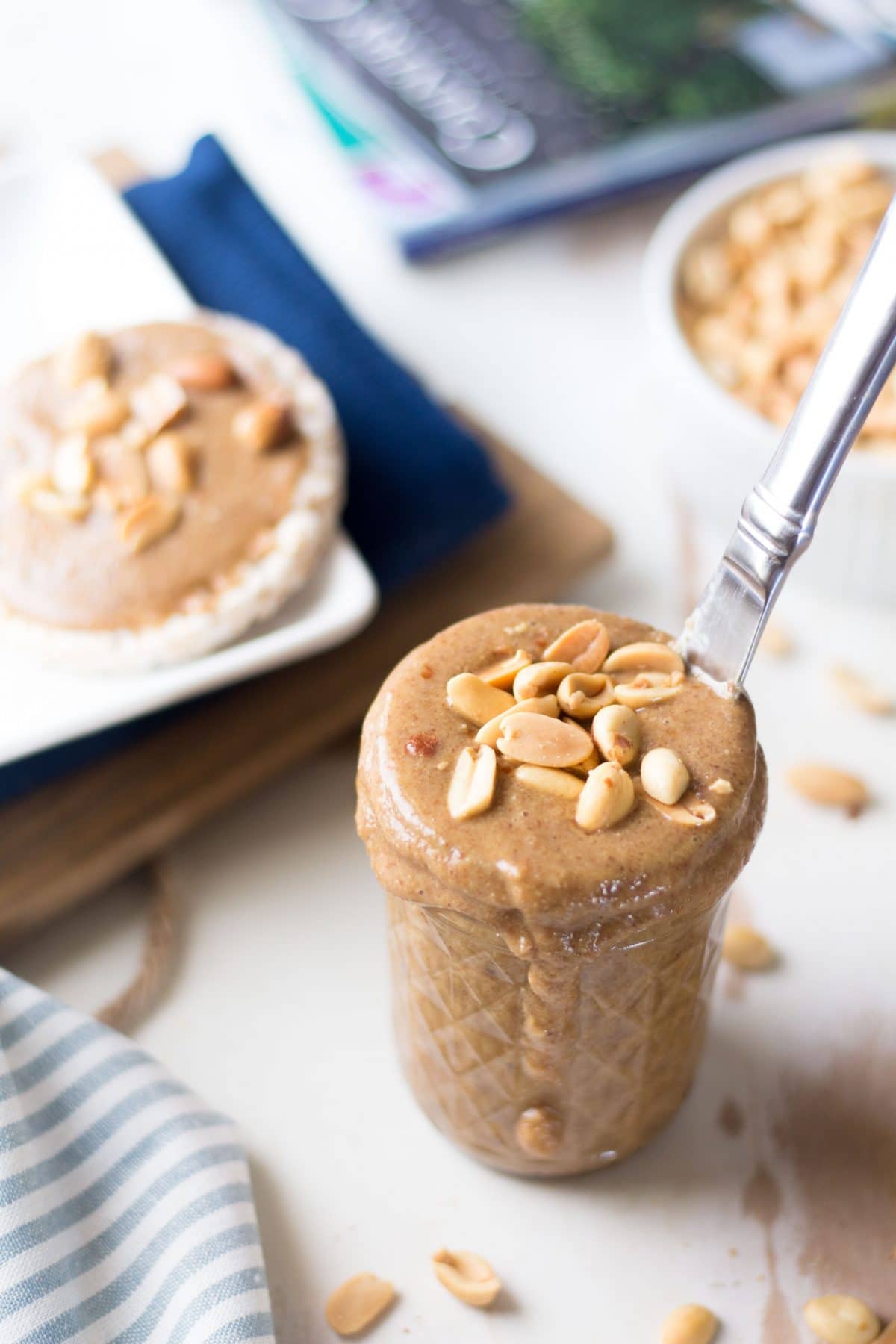 Many people are following low carb diets nowadays.  While I’m not an advocate for a low carb diet (it can jack up female hormones), I am an advocate for carb cycling and carb responsible diets.  Peanut butter is a great low carb source of nutrition that provides a bit of fiber.  And anywhere you can get fiber, you should take it, except in fiber one bars, that’s got more chemicals than food.  Higher fiber intakes have been associated over and over again with a lower risk of disease, including heart disease and colon cancer, as well as lower body weight.

Peanuts are rich in many nutrients, including Vitamin E, Niacin, Vitamin B6, Folate, Magnesium, Copper, Manganese, Biotin, Iron, Potassium, Zinc, and Selenium.  Furthermore, peanuts are rich in antioxidants, including p-coumarin and resveratrol, that have been shown to reduce the risk of certain chronic diseases, including heart disease.  Overall, peanut butter is a nutrient-dense food. 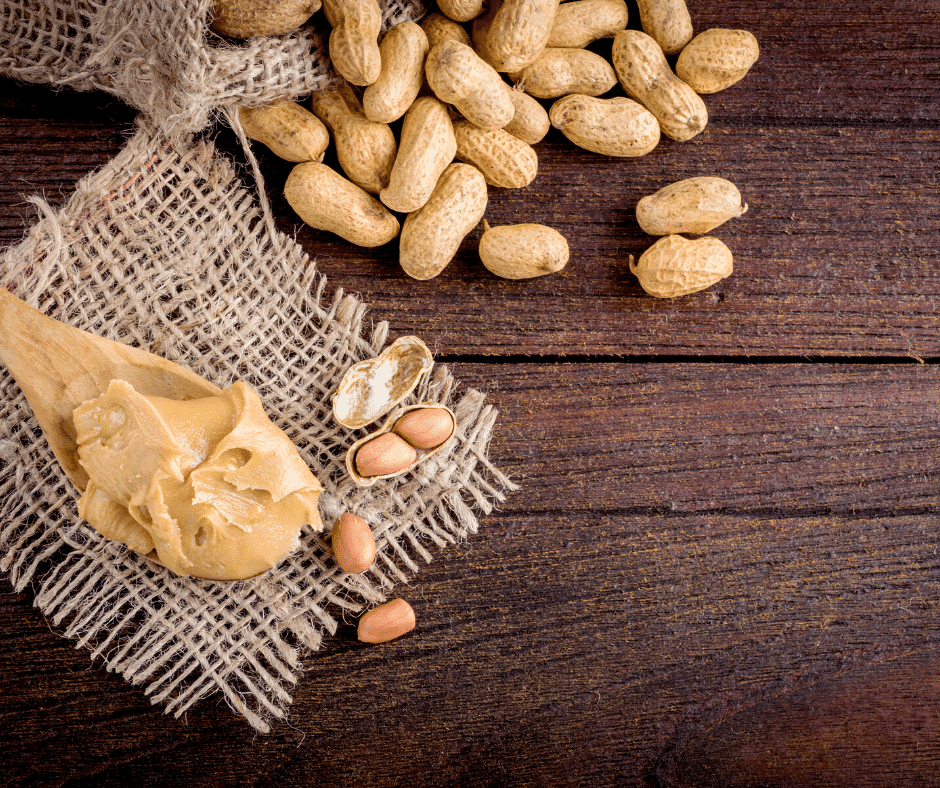 Keep in mind that peanuts are not a nut at all, but instead a type of legume.  And this is where some of the problems come in.  In my husband’s family, there runs a sensitivity to beans overall.  It’s a crazy phenomenon that I’ve had the pleasure of seeing in their family as I’ve tested four people, including Mr. Hungry, his dad, his sister, and his cousin.

All of them have this crazy high level of sensitivities to legumes, which include peanuts. So, if you happen to have some weird familial sensitivity to beans, then peanuts might be inflammatory for you causing leaky gut and or other symptoms (migraines, skin irritation, etc.)  It could be an issue with lectins or just a weird genetic phenomenon, but either way, it could happen to you.  For what it’s worth, I’ve never seen in it in clients that weren’t genetically related to Mr. Hungry, though.

Peanuts are particularly susceptible to the mold Aspergillus flavus, which produces a toxin called aflatoxin.  Okay, so let’s back up because peanuts aren’t the only crop susceptible to this mold.  It also affects corn, cottonseed, and tree nuts. So keep that in mind, as it’s not just peanut butter, we should be singling out.

The USDA tests for aflatoxin (not the mold) in peanuts and sets a limit on the level of exposure because this toxin at high levels has been linked to liver cancer.  A few years ago, a study detected aflatoxin (below standard levels) in various brands of peanut butter with the lowest level being big brands and the highest level being small natural foods brands.

What this comes down to is the money and budget to ensure dry harvesting procedures to keep the mold from growing. There is a lower risk of aflatoxin exposure in the US, though, where procedures are more tightly regulated to ensure minimal exposure.  Also, the simple act of processing peanut butter reduces aflatoxin by a considerable percentage.

That being said, because aflatoxin is tested for and controlled, my bigger concern is for my clients who have sensitivities to molds.  In that case, I might have them pull back or eradicate high mold crops from their diet, including peanuts, corn, and even blueberries, to help reduce exposure.  Again, a rare incidence from one on one client work I do that more than likely does not apply to you. 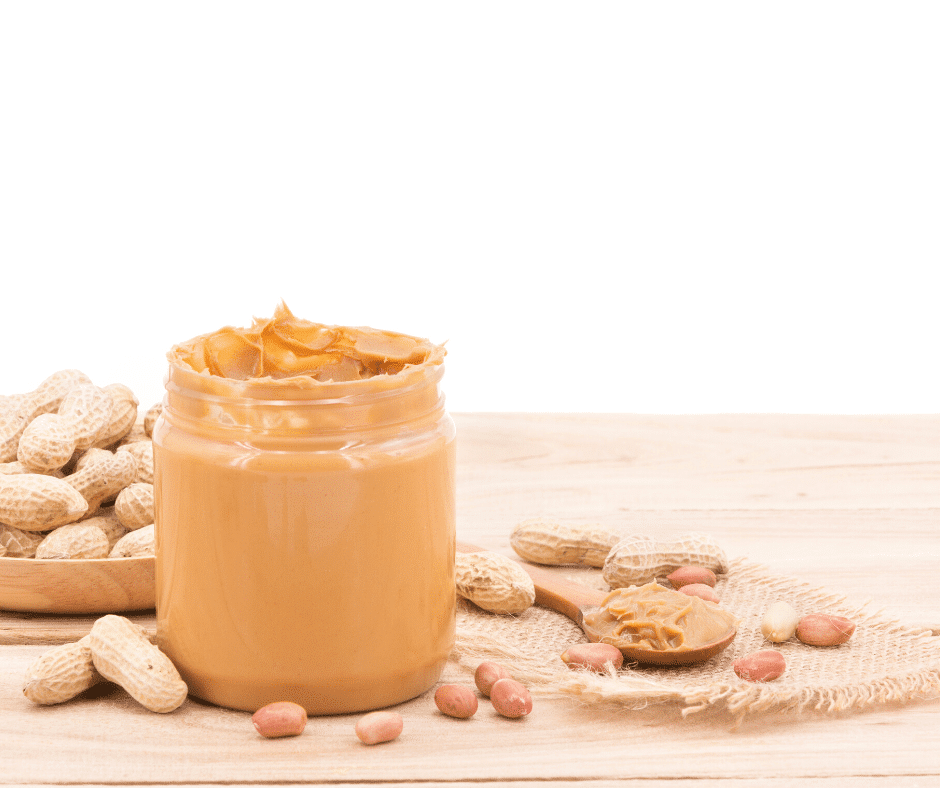 So, can you eat it every day?  Is it healthy enough for you?

Peanuts are a rich source of nutrients and peanut butter providing filling healthy fats in a snack or a meal (like peanut butter and jelly sandwich.)  You’ll want to watch your portions because it’s incredibly calorie-dense and can be an easy way to pile on unintended calories.

Furthermore, I believe that no one nut or seed (or nut-like food) is better than the other.  Each variety of nuts and seeds has unique nutrient properties, and we should regularly rotate what we are eating for the biggest benefit.  For instance, buy peanut butter this trip to the store, almond butter next trip, cashew butter the following trip, etc.

However, the biggest benefit of peanut butter is that it is very cost-effective compared to other types of nut and seed butters.  So, if your budget does not allow you to rotate between types, or maybe your kids plow through it too fast to rotate, that’s fine.  Peanut butter should be considered a nutrient-dense healthy fat to eat as part of an overall well-balanced diet.