Hi, Friends!  Some of you might remember I spent about a week traveling in September, first to Vermont  for Blog Brûlée and then I hopped a late night flight headed to Des Moines, Iowa.  (Some of you may remember the run I did along the river there.) I was invited by the U.S. Farmers & Ranchers Alliance to attend a Pig Farm tour and a round table at DuPont. 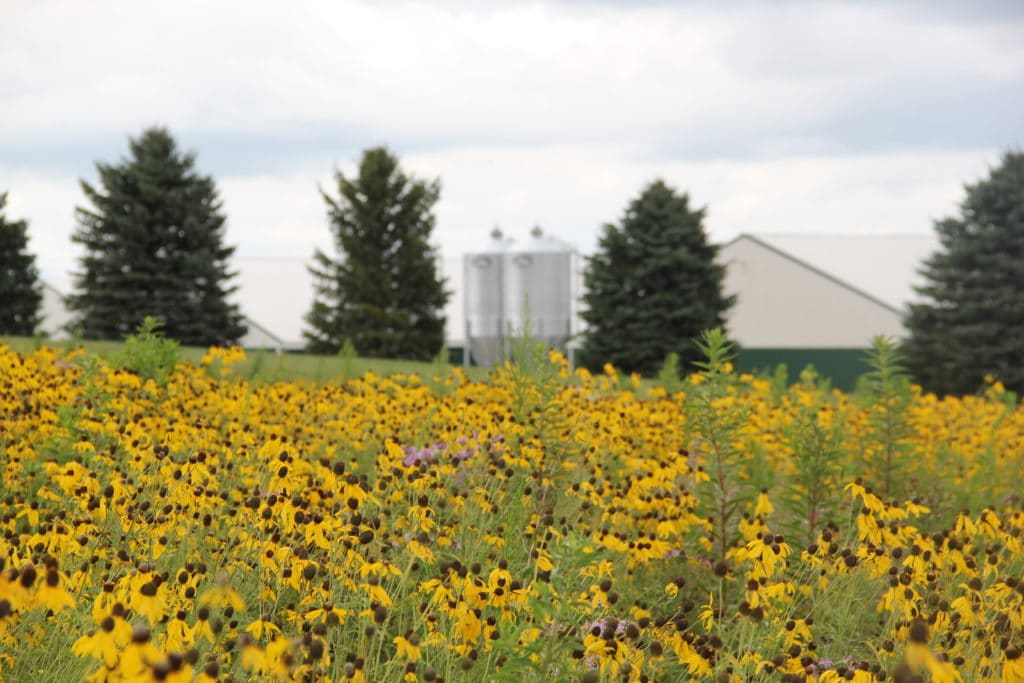 Saturday we headed to an Iowa Selects Farm to meet some baby pigs and learn about the farm.  Here is the weird part, because pigs are so susceptible to life-threatening illnesses such as PRRS (Porcine Reproductive and Respiratory Syndrome virus) the farm had very stringent cleanliness regulations.  In fact, we actually had to cover our shoes before ever stepping foot on the farm.  After we got there we participated in the bench entry system, leaving our covered shoes on one side and sliding over to the clean side.

Then we had to shower into the farm (we also had to shower out.) This meant leaving our clothes in a locker room, washing our hair and bodies, then putting on provided under garments and “coveralls.”  I’ll be honest it was exactly as intense as it sounds. 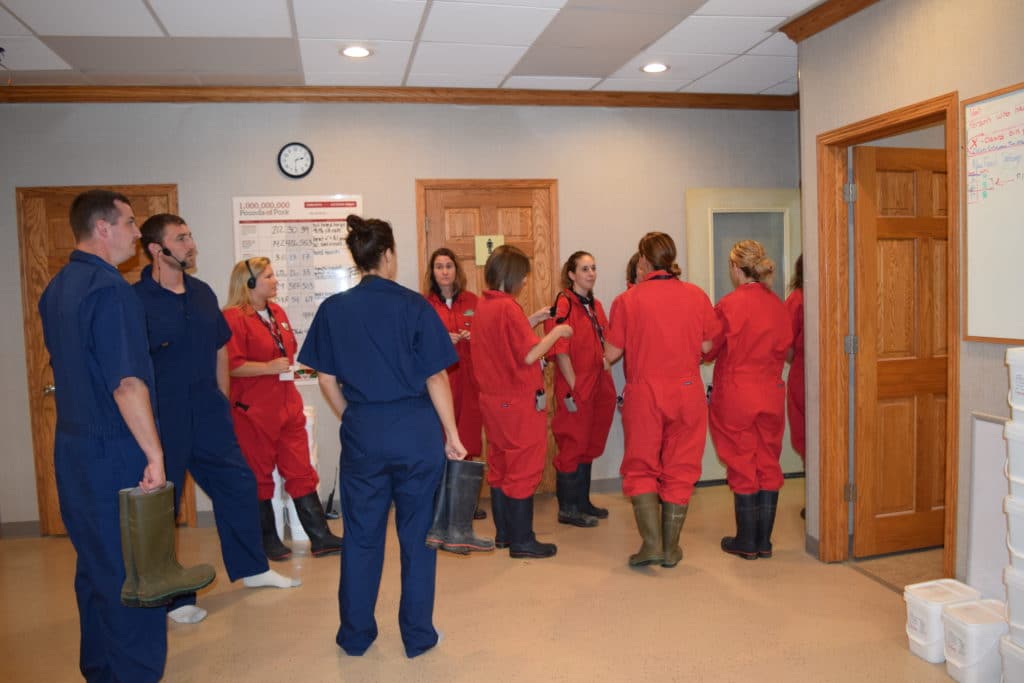 Once in the farm, we were briefed by the lead Veterinarian and others, as a group of all Dietitians, we had plenty of questions.  For me, I didn’t really know what to expect.  There are plenty of viewpoints in the space of animal welfare and industry farming, that frankly, I’ve tried hard to avoid thinking about or discussing in too much detail.  When I was invited on this tour, I knew it was a chance to step out of my comfort zone and get to learn from the source as well as see first hand. 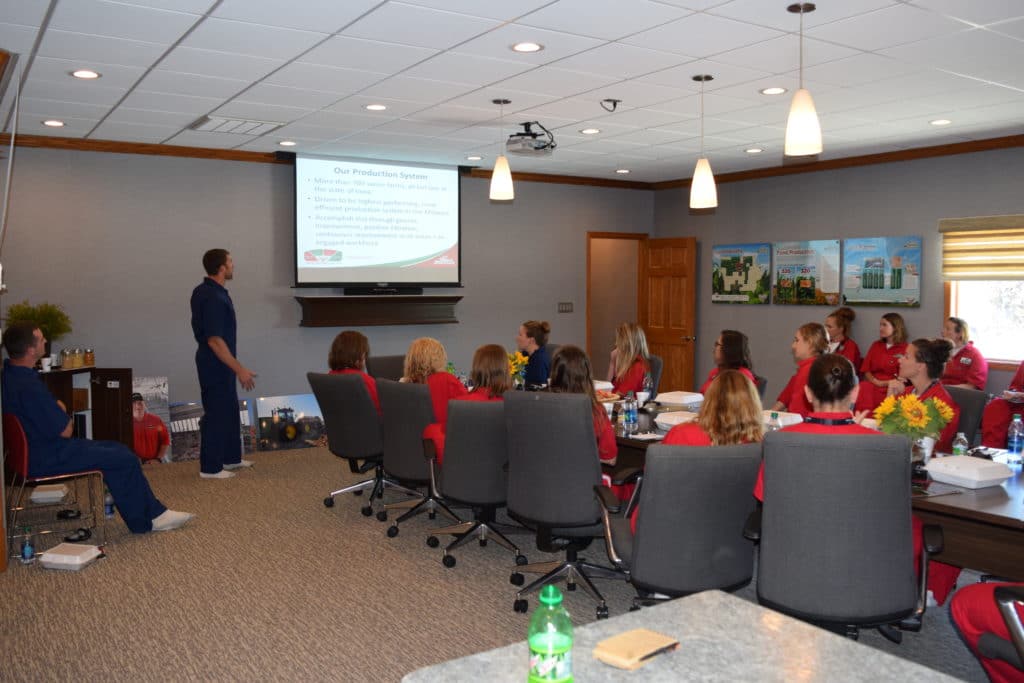 Of all the things I learned, the thing that stood out to me the most was the story of the farmer.  The lead veterinarian said, “Every generation changes significantly, the way my father farmed was different from my grandfather, and the way I farm is different from my father.”  That statement really opened my eyes to the way mankind evolves it’s farming techniques from generation to generation. 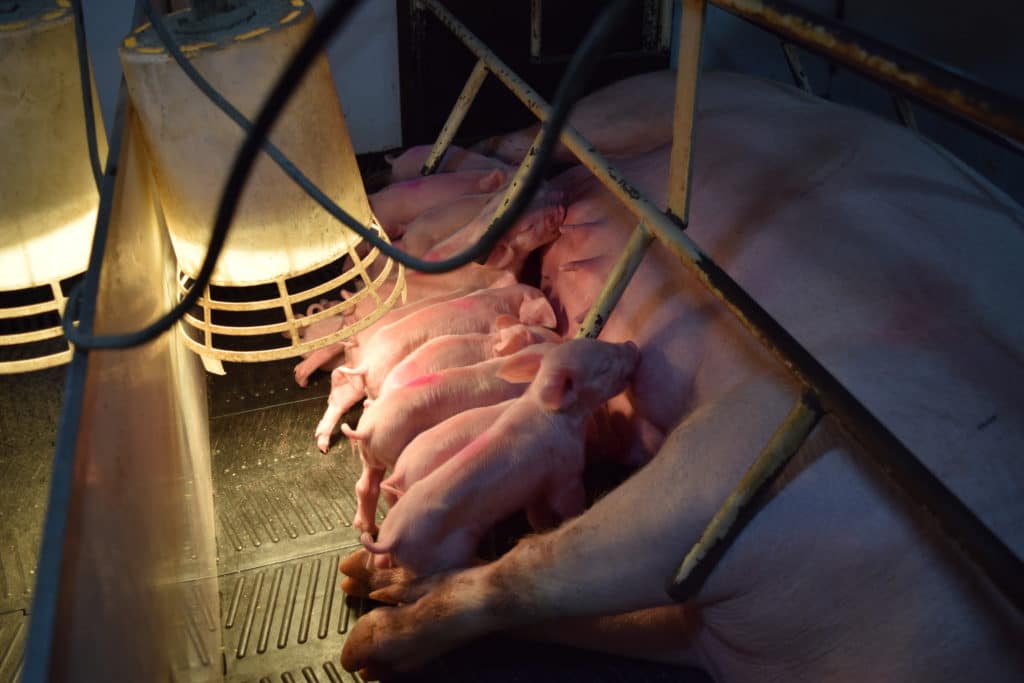 We got to see piglets being born, one interesting thing is that the employees must monitor the laboring sows (pregnant pigs) because babies get stuck in the birth canal.  One of the employees mentioned that was her favorite part of her job, because, piglets that get stuck often pass away from lack of oxygen.  She loved that she could save the piglet and help the mama pig out.

We also got to see colored piglets and the size they would be when just about ready to be weaned from their mother.

Honestly, the piglets were WAY cuter than I expected, I kind of want one.  How do you think Nala would feel about that? 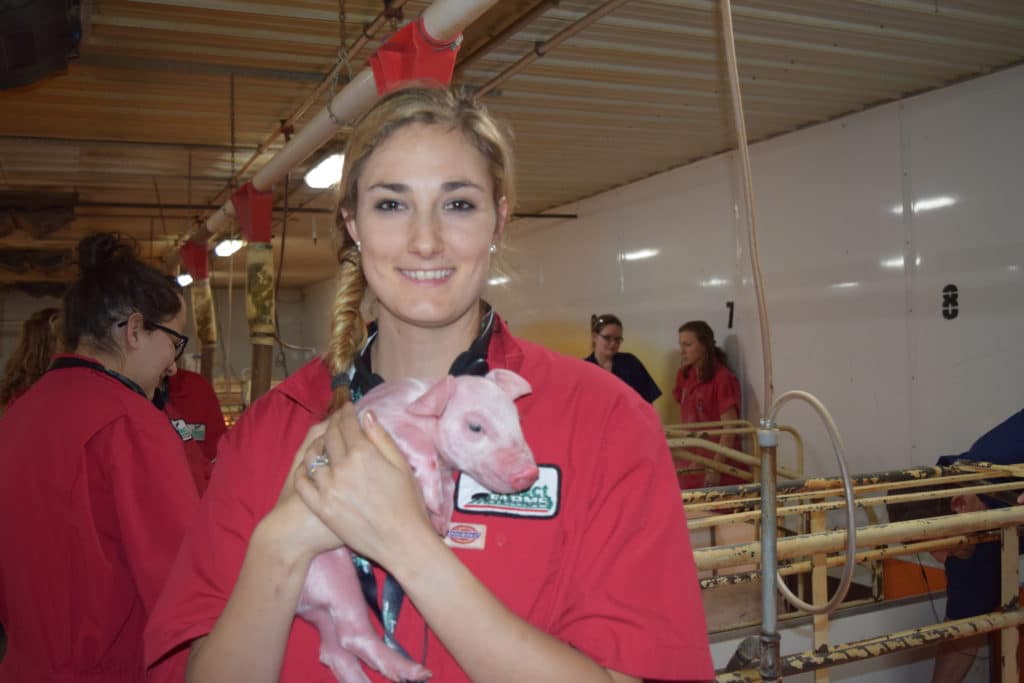 I’ve debated and debated and debated about sharing my feelings on the tour with all of you because I know that farming and animal welfare are issues that people are extremely passionate. I totally respect that, after visiting the farm and meeting the animals I would say I’ve become very passionate too. That being said, here are some of the things I learned and observed: 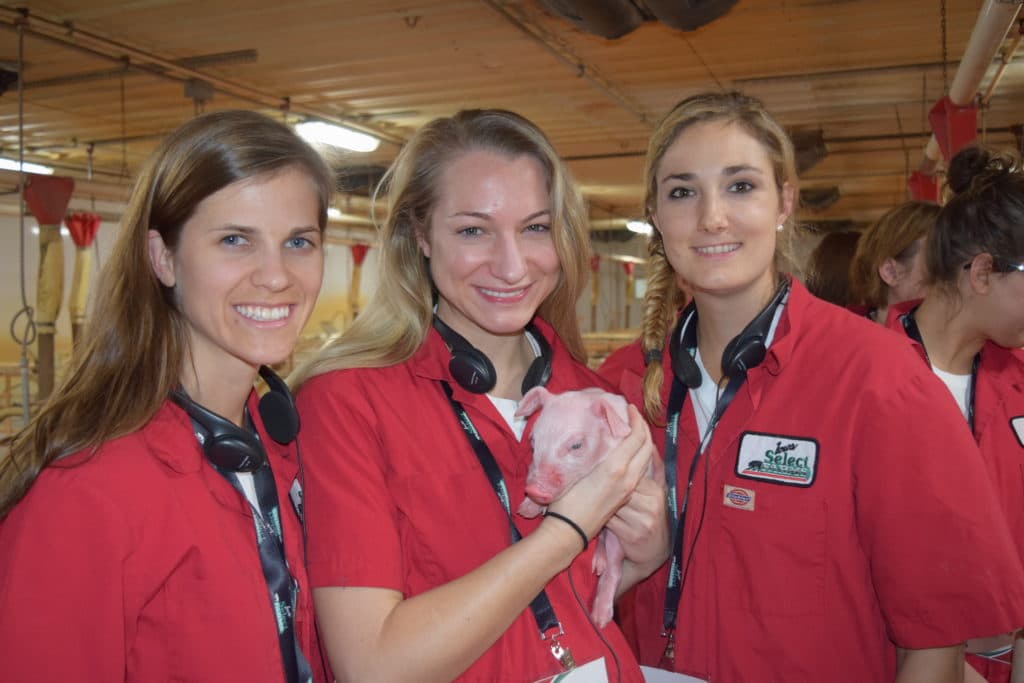 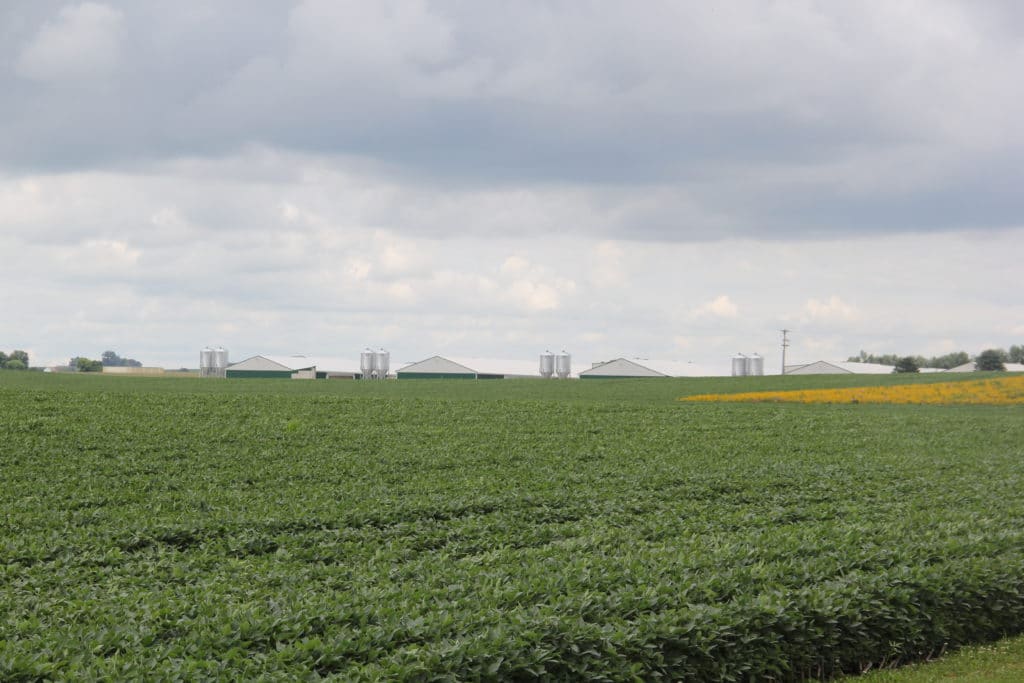 We also toured Dupont.  We got to ask a lot of questions of the engineers there and meet some of the research team.  One of the most exciting things I saw was their commitment to global health.  Through their research, they were able to increase the nutrients that the sorghum plant supplies, greatly decreasing nutrient deficiencies in Africa.

This tour put me out of my comfort zone and I’m glad it did, it was definitely fun to meet the baby pigs! Thank you to USFRA for sponsoring my travel and providing such an amazing experience! 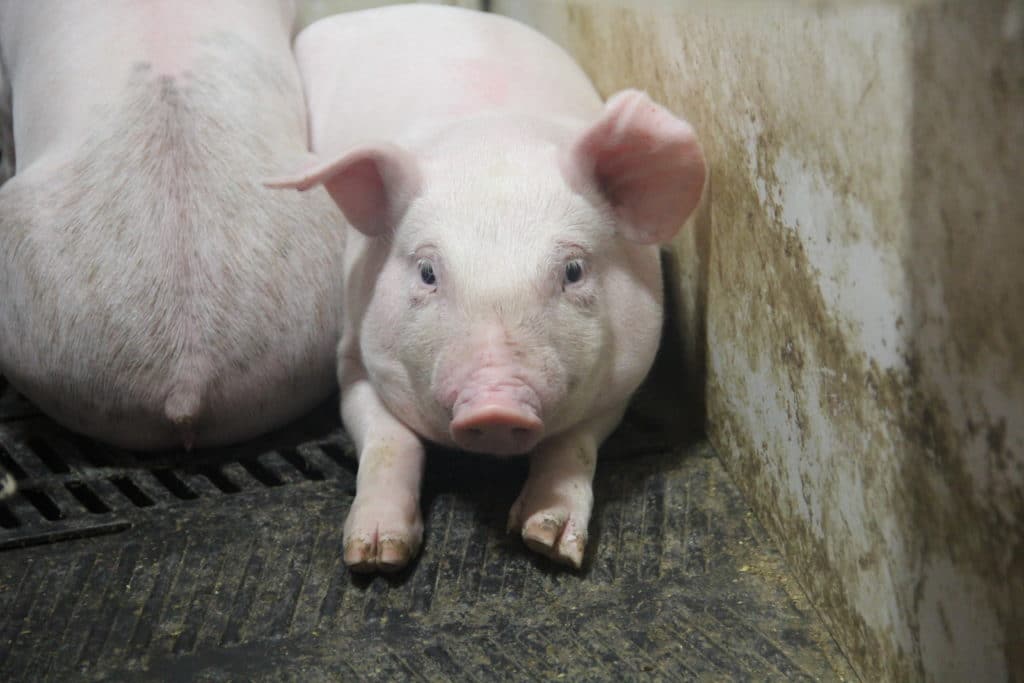 Have you ever been on a farm tour?

Piglets adorable or no?