Hello, friends!  I haven’t done a prego update in a while, so instead of Friday Favorites this week, I thought I’d share an update! 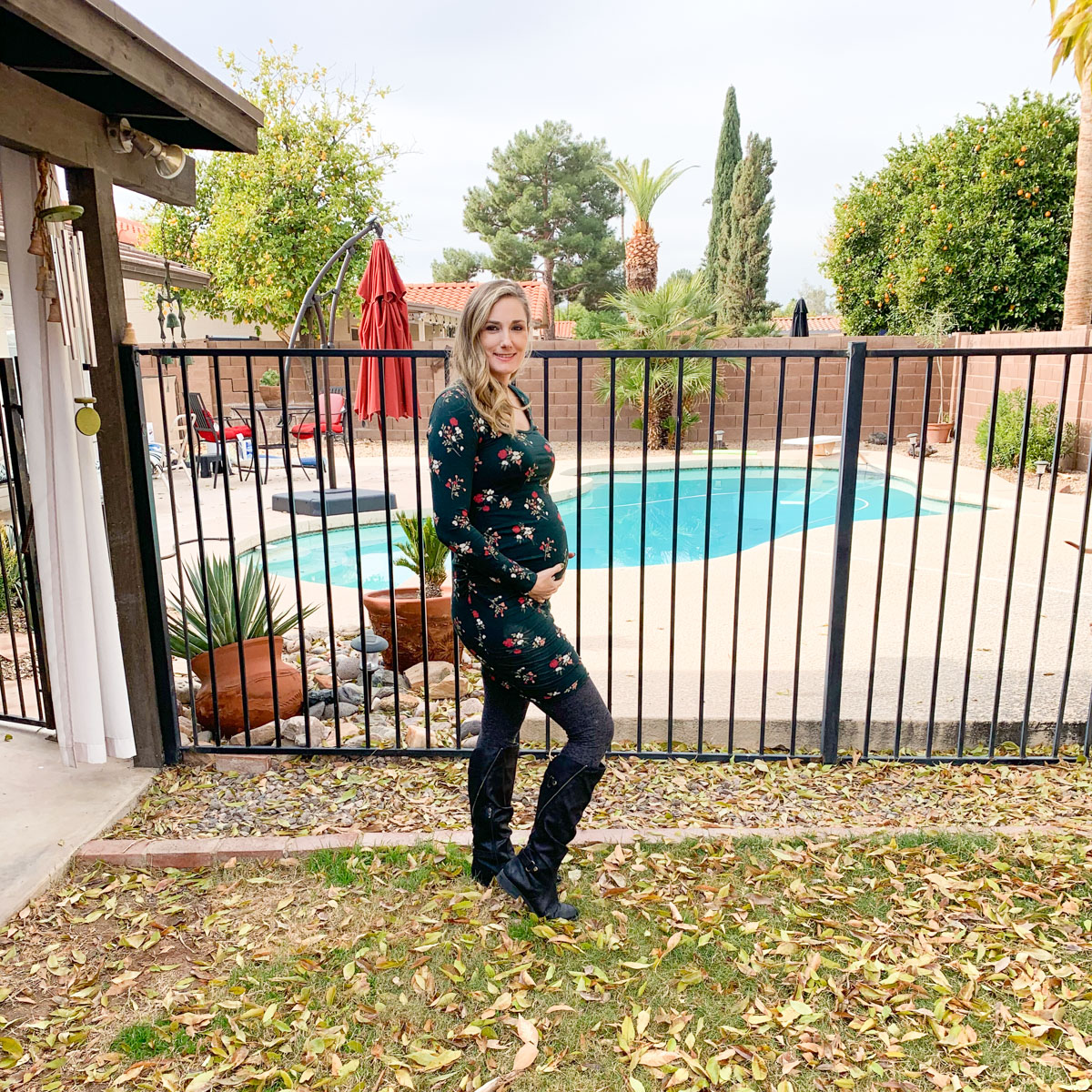 (Photo above; Old Navy Maternity Dress and Leggings Linked In My Fall 2020 Maternity Favorites Post)
With KJ, I did bi-weekly updates, poor second child.  LOL, No, actually, the reason I haven’t done as many updates is mostly that I’ve had so little to talk about!  Reading through my updates with KJ is crazy because there was so much more going on.  I was still super sick and having to take Unisom at night well past week 20. This pregnancy has so far, thankfully been so much milder, but that means less to talk about!  I did jot down a couple of notes, though, and I know that some of you are also prego and like these updates. Others don’t love them.  Feel free to skip this one if it isn’t for you!
Also, the last couple of weeks, I brought back What I Ate Wednesdays (pregnancy edition) on IG stories (@hungryhobbyRD), so if you don’t follow me there, let’s be friends!  I got a few questions about caffeine and supplements I thought I would address here too!
Caffeine – During the first trimester, I weaned down to about 2 ounces of regular ice coffee and the rest of the swiss water process decaf per day.  During the second trimester, I’ve had somewhere between 4-8 ounces of caffeinated coffee and swiss water process decaf k cups daily depending on how much sleep I had or energy I have that day.  I try to stay at or around 100mg per day, on average.
Supplements –  I’m taking the same supplements I took last time, but with the addition of choline bitrate.  Also, I had to stop magnesium until week 19 because of GI symptoms completely. Now it’s needed again.  Weird, last time I took it the whole pregnancy at much higher amounts.  So interesting, who different things. 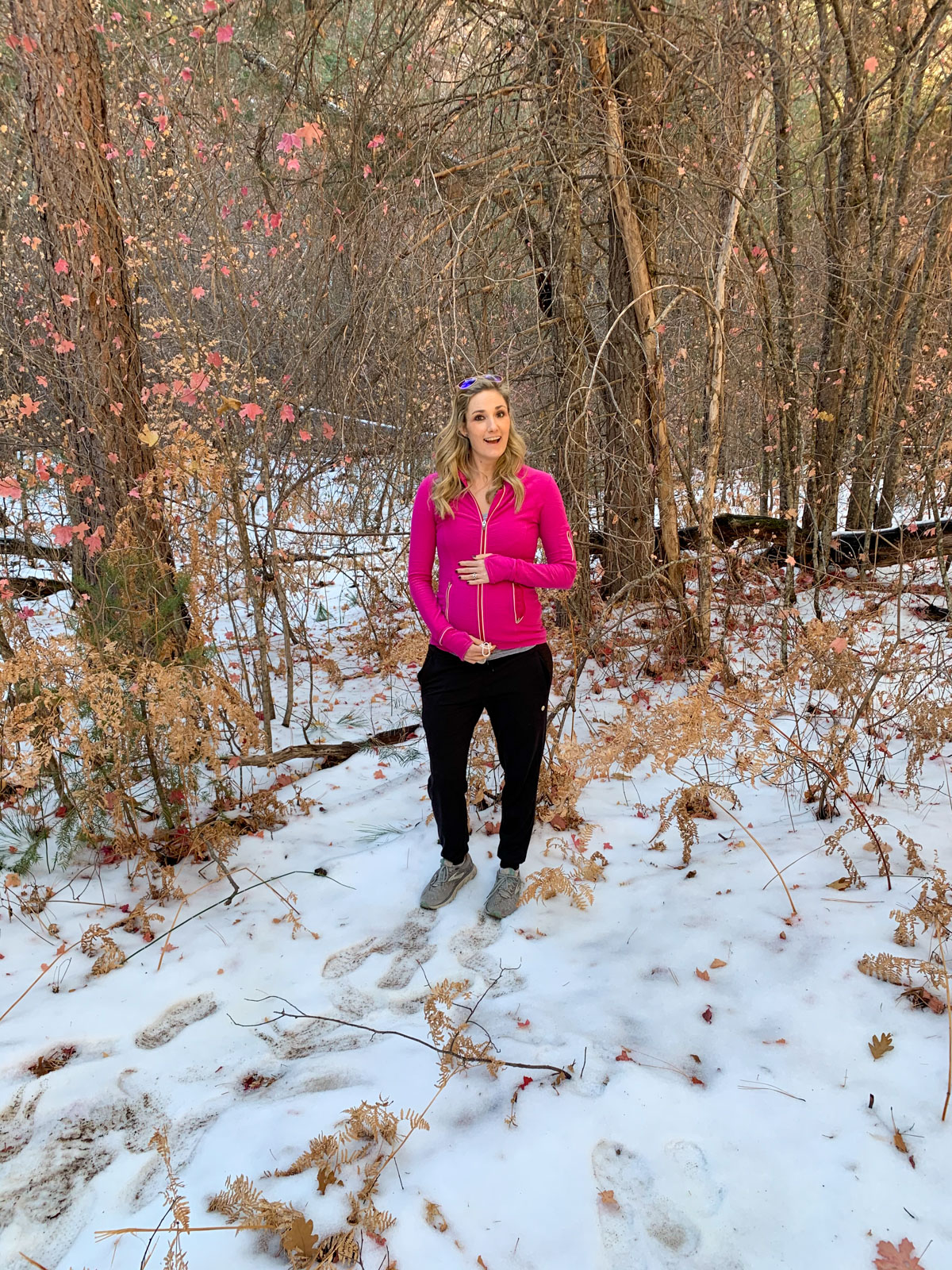 We went to Sedona over the weekend. I had a little issue with my sternum or ribs while hiking. It felt like right over my breast hone at the bottom of my rib cage was attached to a rubber band that was getting stretched out as we hiked.  I had to stop and rest every 30 minutes or so, but it was definitely muscular. Other than that, it was a great trip (read recap here.) No cravings, but I did eat almost a whole bag of Late July Salt and Vinegar Chips, and they were freaking delicious.
This week, I began the expecting and empowered workouts. Holy crap, these are so good! It felt good to do a real strength training circuit versus the more HIIT style I was doing on Aaptiv.
For reference, week 14-15 with KJ. 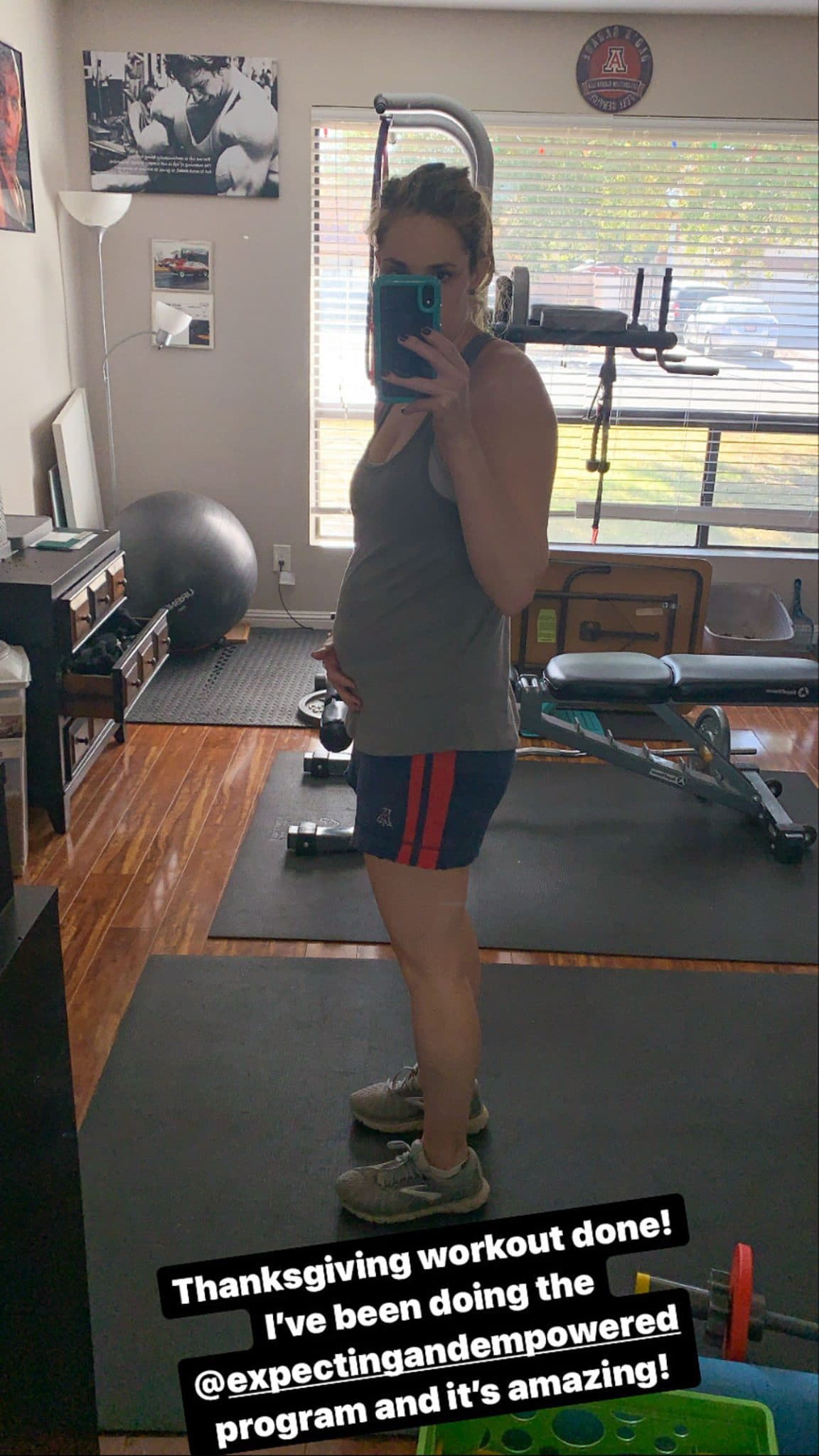 I had a few nights where I woke up in the middle of the night with dull aches. I honestly think it’s because the elastic band on the PJs I was wearing was too tight.  I switched and haven’t had a problem since. Other than that, nothing super remarkable this week.  I kept being able to eat more things and have a little bit more energy.
I ordered a new humidifier as my pregnancy-related stuffy nose started to set in!  I’m obsessed with this new programmable humidifier!

I was reading back in my old updates, and I had so much more going on at this point with KJ. I was still super sick with KJ, and I even had to take Unisom still at this point.  Things are way different this time around.  I still have SUPER itchy skin.  But, I can eat almost anything that’s not shredded turkey or chicken.  Getting back into the swing of things of cooking dinner etc.  I stopped taking the progesterone this week! eekkkkk  (Doctor told me to get off of it at 14 weeks, I decided to finish up what I had.)
Some pelvic pain, some pressure, some gas.  I’m wondering if last week was the first signs of the pubic symphysis dysfunction I had last time or gas or just the elastic band on the PJs? Guess time will tell! I’ve definitely had some round ligament pain this week, which is oh so fun, but nothing too terrible.
I had my pregnancy tumor on my teeth evaluated. The doctor said he’s gonna burn it off with a laser.  Awesome right? *For those of you who are unfamiliar with a “pregnancy tumor,” – it’s called a pyogenic granuloma.  I had one with KJ in the SAME spot, that one was really mild, and the dentist was able to remove the back of it and let the front heal on its own about 6 weeks after birth.  This time it came back in the same spot, which, although unusual since my dentist already biopsied it, he isn’t concerned.  He thinks it’s probably because those two teeth are particularly close together, making it susceptible.  This one grew a lot faster than the one with KJ, so we opted to remove it now since the second trimester is the safest time to do so.
Week 16 & 17 with KJ for reference.

I started to feel more kicks and wiggles this week! This week’s big thing was I had a friend who told me all about a hypnobirthing class she is taking (she is due way ahead of me), and it sounded so cool.  This friend has a very similar personality to me, and the more she talked about it, the more I liked it.  I tried to sign up for classes, but you have to sign up in your area, and I don’t want to do it in person because of COVID (AZ instructors are only in person), so I opted for the home study course.

If you’ve had a positive experience with natural labor with or without hypnobirthing materials, I’d love to hear!  I spent a lot of time thinking back to the experience I had with KJ. You can read the full birth story here.  While I wouldn’t change my labor story with KJ because it was what I needed at the time.  The more I think about it, the more I’d like to avoid an epidural or really any intervention if possible this time.

I had some heartburn during working out this week, which was annoying but went away shortly after finishing my workouts.

This week two fun things happened!  The first thing was that we had our anatomy scan! I must admit, with KJ, I was super excited for the scan, but this time I was a bit more nervous than excited.  With KJ, we had an echogenic focus, which was not adequately explained to us while my doctor was out of town, leading to some anxiety.  Thankfully all went well! 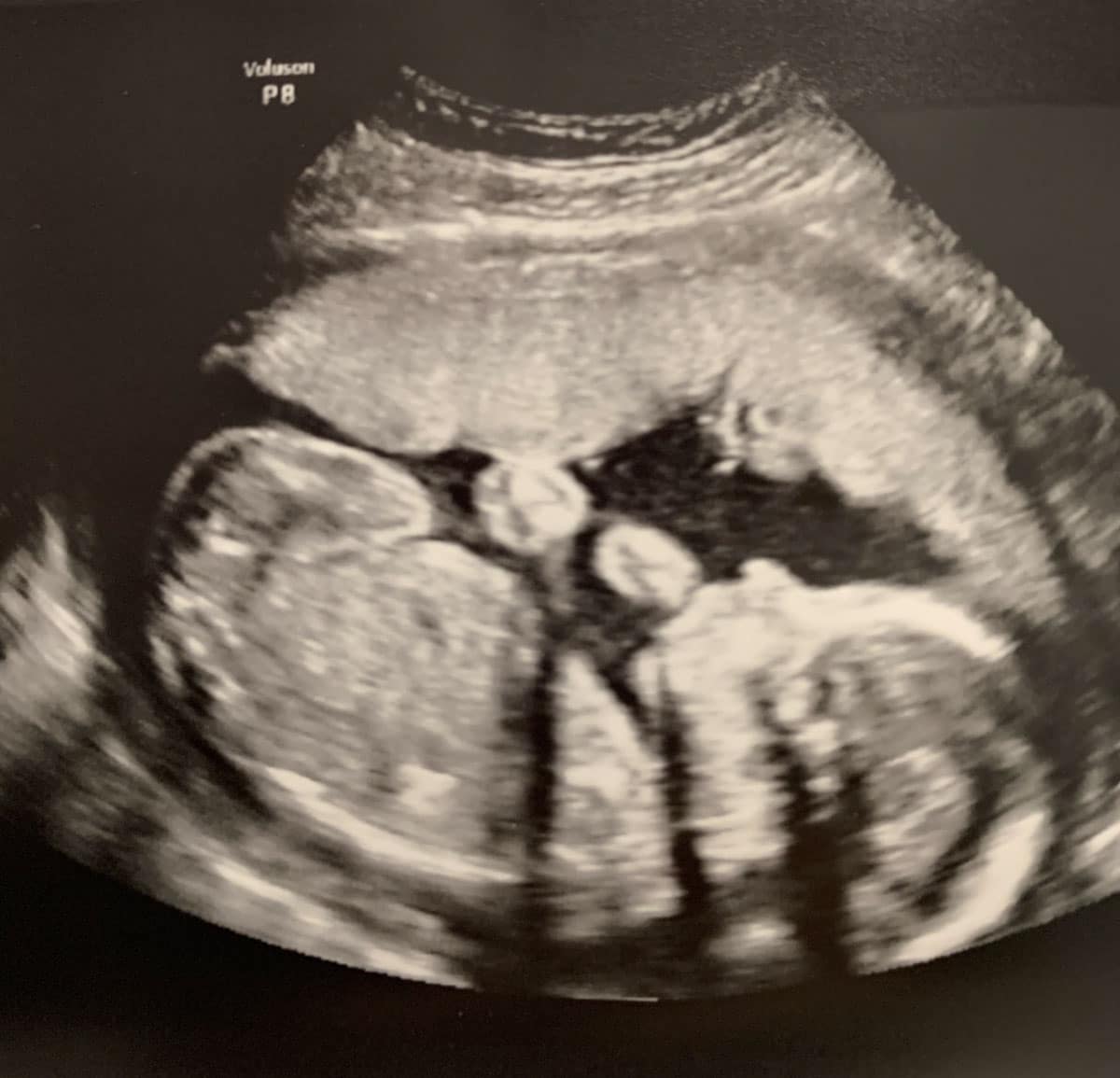 He said that the baby boy is in the 97th percentile, and everything looks great! I think KJ was pretty big, too, and then his growth slowed down toward the end of my pregnancy.  I know every baby is different, though! As for me, I’m up about 16-18lbs, or something like that.  I’m much more relaxed about weight this time for two reasons.  One, I didn’t start 10lbs up.  Two, I remember the huge benefit to my metabolism I experienced from my last pregnancy.
The next day after the anatomy scan, I got my pyogenic tumor friend removed from my gums. Yes, dental work sucks, but now people won’t politely try to tell me I have something stuck between my teeth all the time!
And that brings us to the current time. I turn 20 weeks tomorrow! I’m feeling baby kick almost every day now, which is so fun! I’m doing about 3-4 workouts a week, mostly strength-based, but a little cardio.  I’m not really craving anything per se, but I’m also not feeling sick, which is a blessing.  However, I am drinking way more water than usual, probably from all the increased sodium/sugar from holiday treats!  I’ve also noticed a bit of restless leg syndrome creeping up, which is always annoying, but not the worst pregnancy symptom. So that’s it for now! Let me know if there is anything else you want to know!
Week 18-19 Pregnancy Recap
Question of the day:
Second-time Mamas, were your pregnancies very similar or super different?