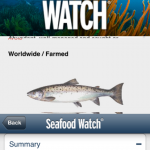 First, let me start with an apology. Apparently, I should have announced it would be seafood extravaganza here at Hungry Hobby this week.  I didn’t know that I was going to be totally and entirely obsessed with seafood, but apparently, I am.  Usually, if I can’t have meat one day, I try my hardest to eat tons of cheese in the forms of grilled cheese, quesadillas, etc.…  This time around (during the first week of Lent) I’m all about the seafood.  I don’t know about you, but all the seafood buying guide stuff totally confuses me.  With meat, poultry, and eggs the message is pretty clear: buy free range, grass fed, organic whenever possible.  Why?  Well because they tend to be naturally leaner, healthier, and have a better overall good fat to the bad fat ratio (usually higher in omega 3’s) than traditionally farmed animals.  Beyond their better nutritional profile, raising animals in this way is more humane creating better overall health for the animal and better for the environment overall.  Okay, cool got it.  Then people start talking about fish, and my eyes begin to glaze over… I’m losing interest in the conversation.  Why?  Well first of all because fish is so healthy on its own, let’s not mess with a good thing.  Amiright? Second, because farmed fish is SO SO SO SO much cheaper than wild caught.  Then there is all the stuff about potentially contaminated versus not. Usually, they’ve lost me by this point.  That’s why I LOVE this new app I found.

This app breaks it down and makes it all very very very simple to understand.

So say I’m at the store staring at the fish case and there are wild caught and farmed options.  Let’s just say that one is like 10 dollars cheaper than the other; I’m leaning toward the more economical reasonable buy.  Okay, I can check my pocket guide, and I’m not surprised to see it says “avoid” by farmed salmon because I’ve heard that before, but I don’t know what the big deal is or what’s causing this 10 dollar difference.

Okay let me be perfectly honest, I recycle, I use reusable grocery bags when I remember, I avoid food waste at almost any cost … I care about the environment.  If I am standing at the store, though, I can’t help that I am still reaching for the cheaper buy.  So, I read on.

Bam, the health note tells me what I need to know to make me reach for that wild caught selection.  Polychlorinated Biphenyl (PCBs) are a chemical once widely used in electrical equipment that was banned in the late 70’s, according to the Environmental Protection Agency PCBs “have been demonstrated to cause cancer, as well as a variety of other adverse health effects on the immune system, reproductive system, nervous system, and endocrine system.”

More investigating tells me that these chemicals are stored in the fatty part of fish, and the public health department of Oregon recommends cutting away all the fatty parts of possibly contaminated fish.  If you do that, then you strip away all the healthy fats and fat soluble vitamins, the reason you were eating the fish in the first place (other than it’s yummy.)  So now I have a better understanding of this particular recommendation and can make my choice according to my new knowledge and budget concerns.  I think this app is a pretty neat little pocket guide to contribute to making sense of the seafood recommendations in regards to health and environmental concerns.

The graphics aren’t all that clear on it, but the interface is very user-friendly, and the app has other neat functions.  It also allows you to locate nearby restaurants/stores with sustainable seafood options.  Close to me were Rubios and Trader Joe’s, which I was obviously very excited about.  Overall, I would highly recommend this free app as an awesome educational tool and reference guide.  Happy shopping and happy Friday!