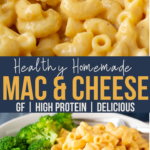 Simple, rich, and creamy, healthy homemade mac and cheese that’s just as flavorful as the one from your childhood, but just a bit better for you! 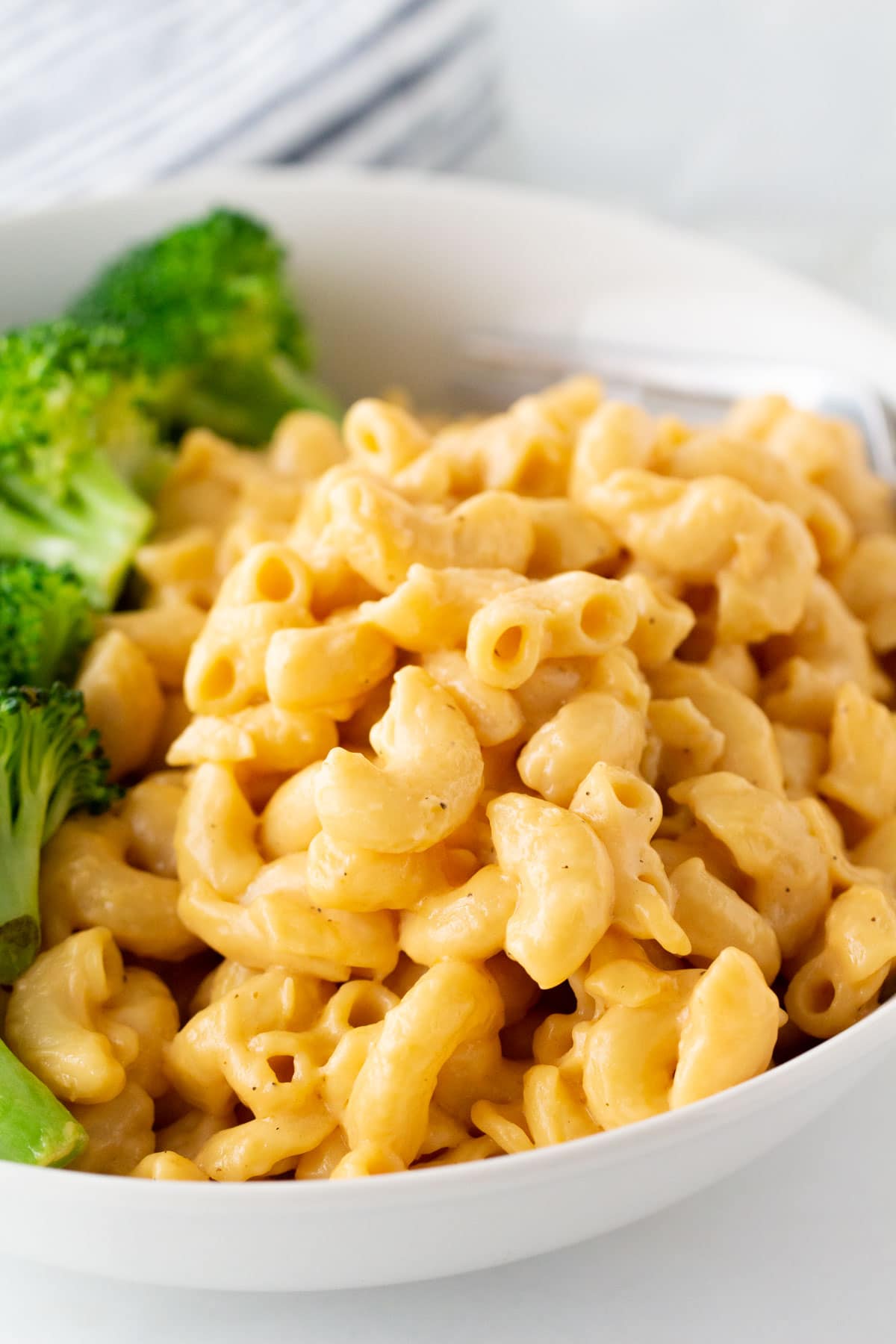 Don’t me wrong. I love my go-to creamy quinoa mac and cheese recipe.  But sometimes, nothing replaces the noodles, ya know?

And although I’ve been eating chickpea pasta for years now, it only recently occurred to me to try my creamy cheese sauce for my quinoa mac and cheese on chickpea pasta! And OMG, why did I wait so long??????? 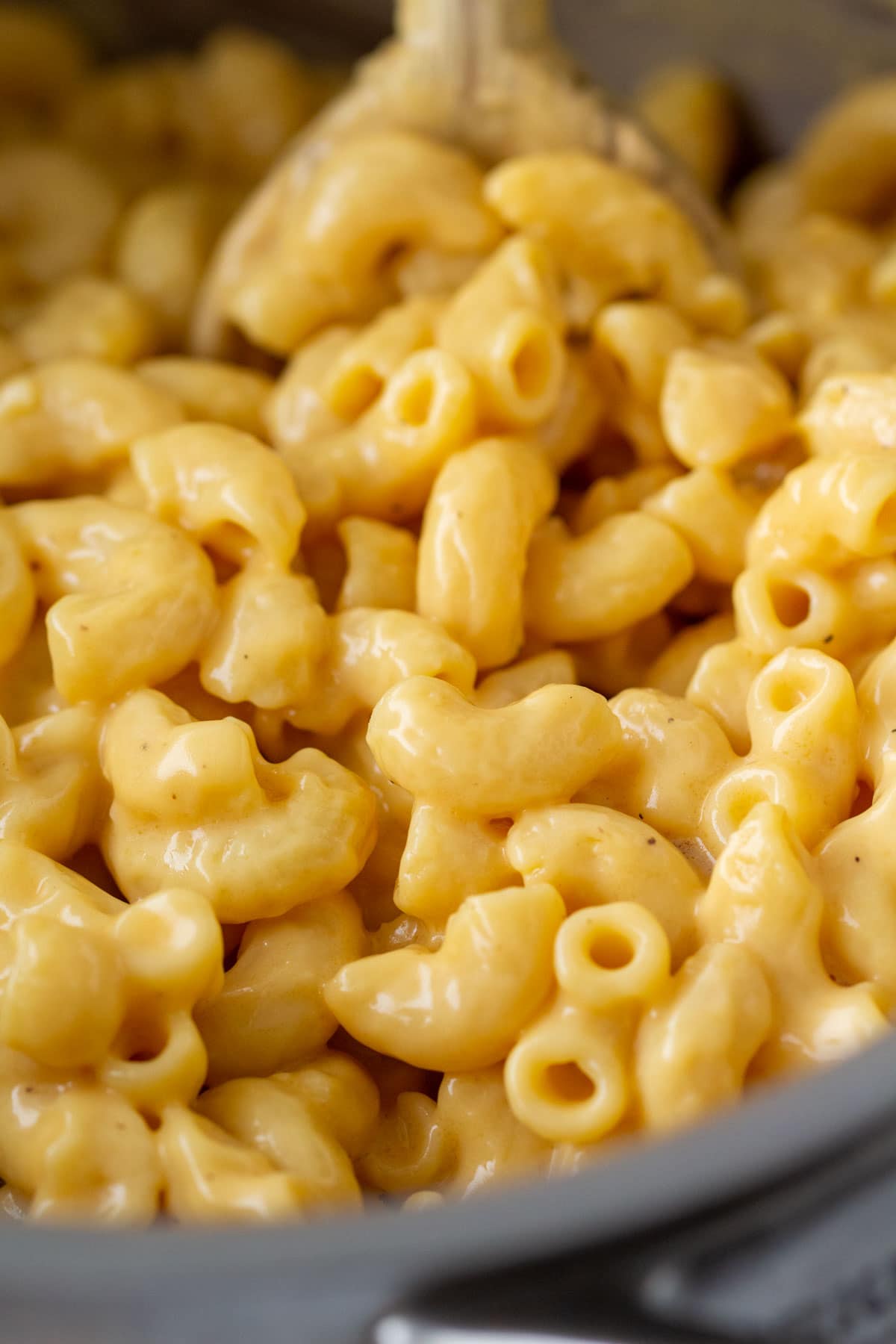 A lot of healthy mac and cheese recipes use whole wheat pasta, which is an excellent whole grain upgrade, but not as good as chickpea pasta.  Chickpea pasta has three times the amount of protein, half the carbs, and twice the fiber as whole wheat pasta.  And the texture?

Personally, I’ve never been a fan of whole wheat pasta, but chickpea pasta is delicious cooked al dente.  In my opinion, more reminiscent of traditional pasta.  And NO, it doesn’t taste like beans, trust me, I don’t like beans, so I wouldn’t eat this if it did.  Hopefully, I’ve convinced you to give it a try! 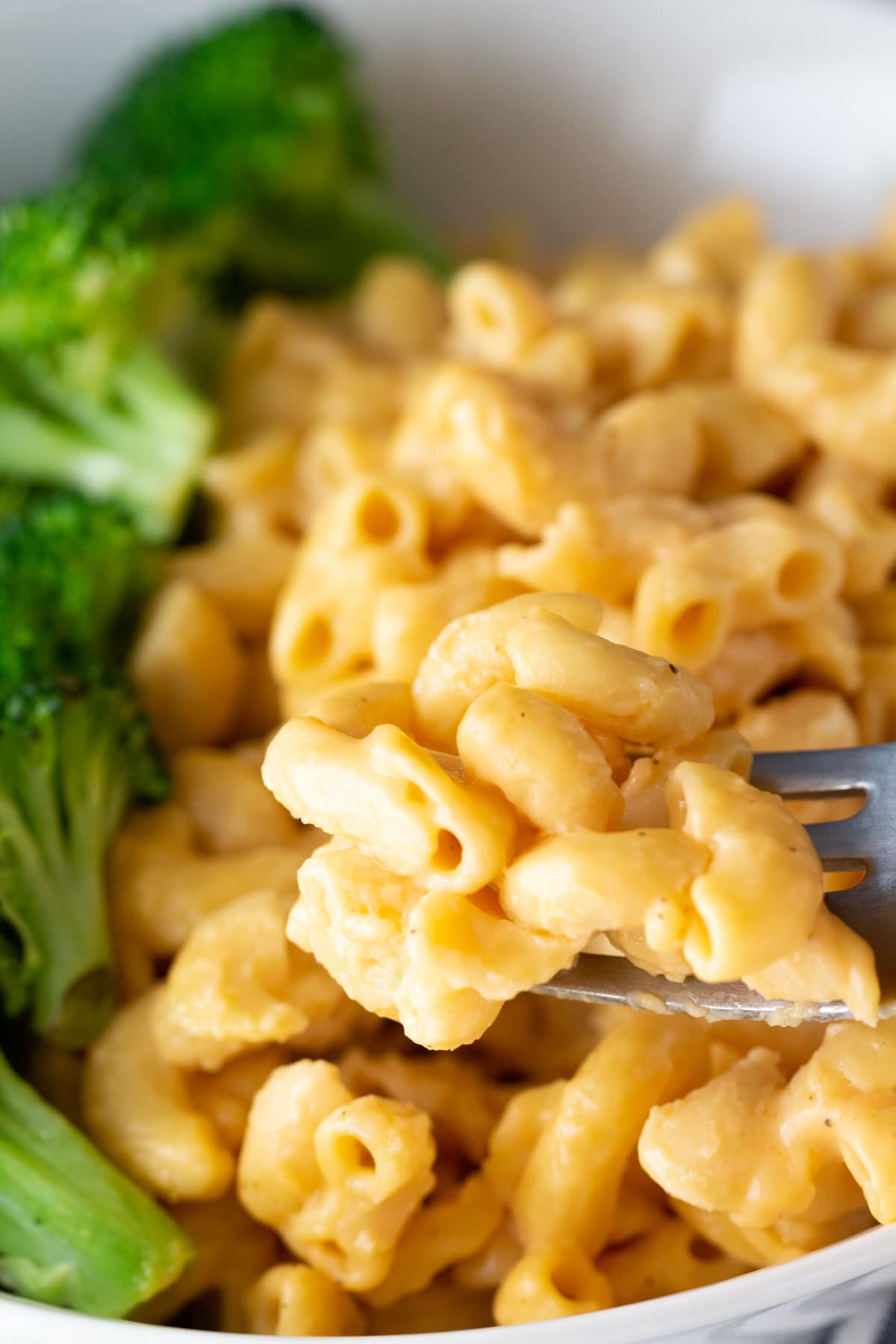 As for the sauce (aka the most important part), I did have to tweak it just a little a bit from the original creamy cheese sauce version in my quinoa mac and cheese (which is adapted from my broccoli cheddar oatmeal bake.) But, I did not sneak in veggies to it. Repeat, I did not sneak in any veggies into this sauce.

Look, I’m not against it, it’s just that every time I’ve tried in the past, I haven’t liked it.  Kind of like cauliflower or zucchini in my oats, I can do it in a smoothie, but I draw the line in my oats.  I just can’t get on board. Kootohs to those of you who can, I just can’t.

Besides, there is just something about mac and cheese and broccoli that goes together, and I’m more than happy to eat a bowl full of broccoli mixed in with this healthy mac and cheese as my veggie.  Also, this sauce is already way lighter than most mac and cheese sauces, so there is no need to ruin a good thing, ya know?  PLUS, it’s soooo easy to make.

How to Make Healthy Mac And Cheese

You’ll make your sauce while you wait for the water to boil and then cook your pasta.

The sauce is a pretty straightforward standard roux.  DO NOT LET THE WORD ROUX INTIMIDATE YOU. It’s not as fancy or as hard as you think.

You’ll mix your flour with 1/4 of the milk, melt butter in a skillet, and then pour the flour/milk mixture over it, immediately followed by the rest of the milk.  Then you’ll stand there checking IG with one hand and stirring with the other every 30 seconds or so for 7-10 minutes until that watery mess becomes a thick cream. It’s more boring than hard, I promise!

Once you’ve got your cream sauce, you’ll turn off the heat, and then you will stir in your cheese little by little.  Do this first while the sauce is still hot. That way, the cheese will FULLY melt.  Then stir in your seasonings, and for a tiny bit of tang, some Greek yogurt.  This is your chance to taste and adjust seasonings, in case you like things a bit more garlicky or peppery.  You could also add a sprinkle of onion powder here too. 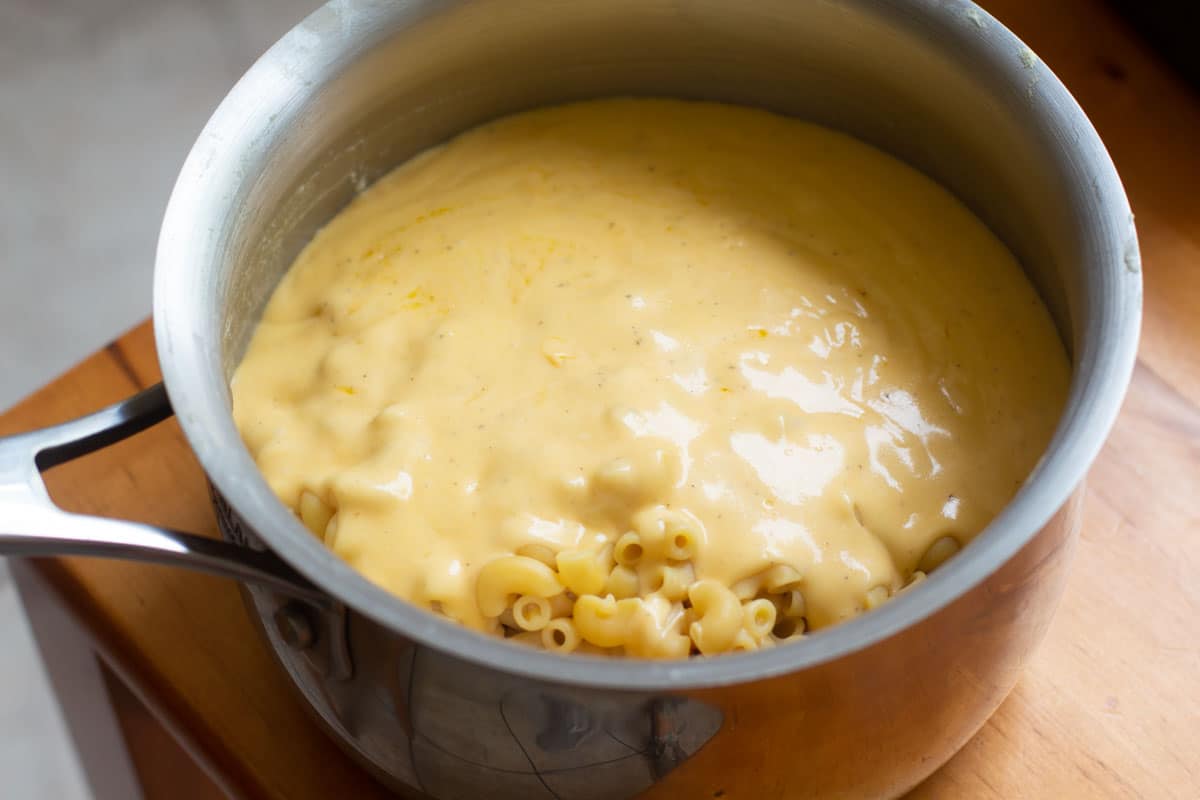 Now, for the moment you’ve been waiting for this whole time.  Pour that rich, creamy cheese sauce over your pasta and stir baby stir.  It will be so creamy and cheesy. You almost won’t believe that it’s healthy.  But, with 25 grams of protein and less than 400 calories per serving, you better believe it, friend! 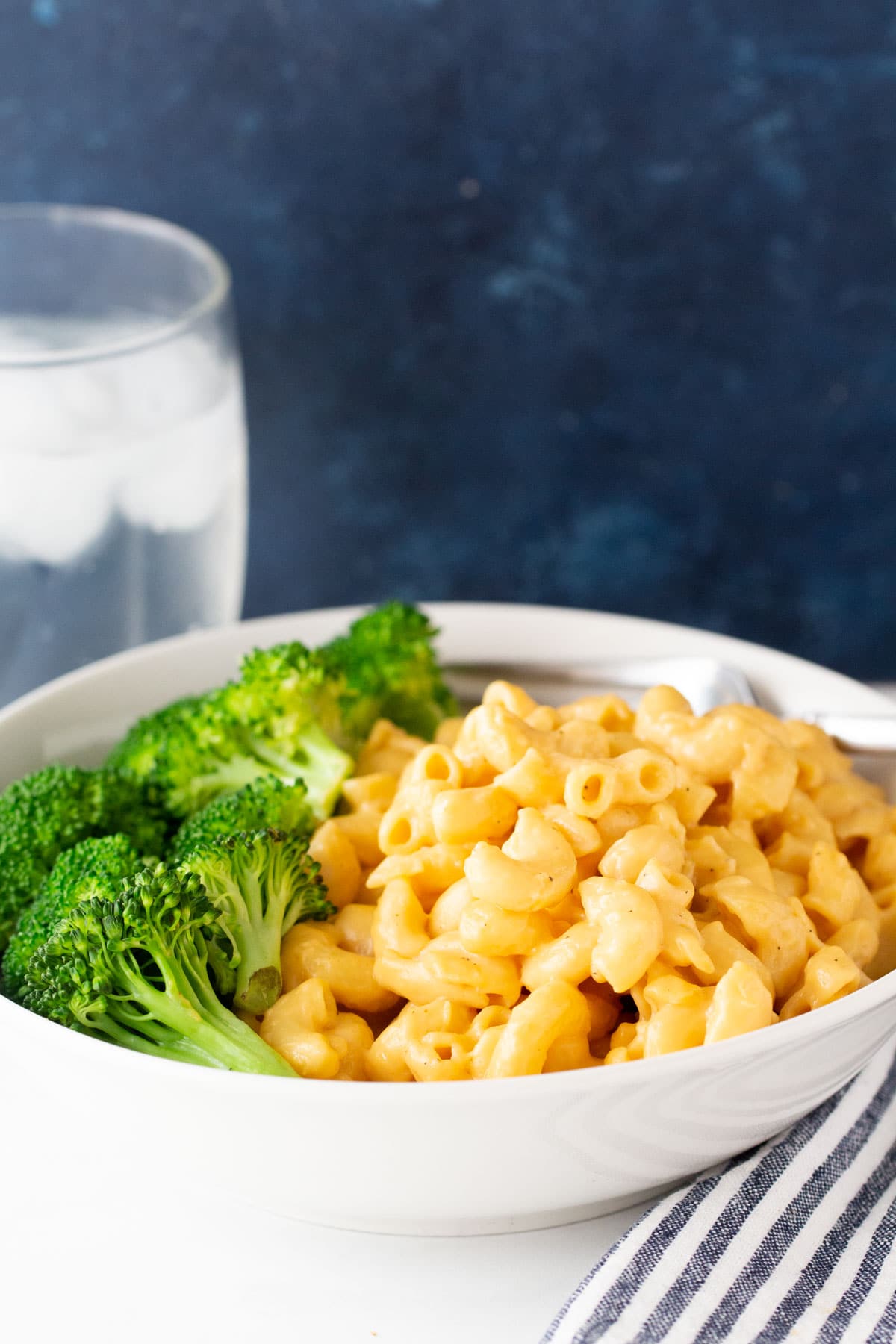 Tag me if you make these! I love to see what you guys make! You can tag me on Insta @hungryhobbyRD and Facebook @hungryhobby!

PS I’m including my video for my quinoa mac and cheese in the recipe card below. It will give you an idea of how to make the sauce until I get a chance to make a video for this one! (The video shows the greek yogurt added before the cheese, reverse that and add the cheese first to make sure the sauce doesn’t cool off!  It usually works either way, but occasionally the greek yogurt cools off the sauce too much and makes it hard for the cheese to melt.) 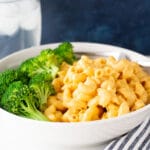 Calories: 394kcal | Carbohydrates: 35g | Protein: 25g | Fat: 20g | Saturated Fat: 9g | Cholesterol: 45mg | Sodium: 769mg | Potassium: 35mg | Fiber: 8g | Sugar: 6g | Vitamin A: 441IU | Calcium: 464mg | Iron: 6mg
Tried this recipe?I'd love to see what you made! Tag me @hungryhobbyRD or tag #hungryhobby if you try this recipe!
Use my recipe filtering to find any recipe you want in my recipe index! Filter by meal, ingredients, diet, or occasion!
Like this recipe? Don’t forget to pin this recipe for later and follow @hungryhobby on Pinterest for more healthy recipes, quick workouts, and nutrition tips!