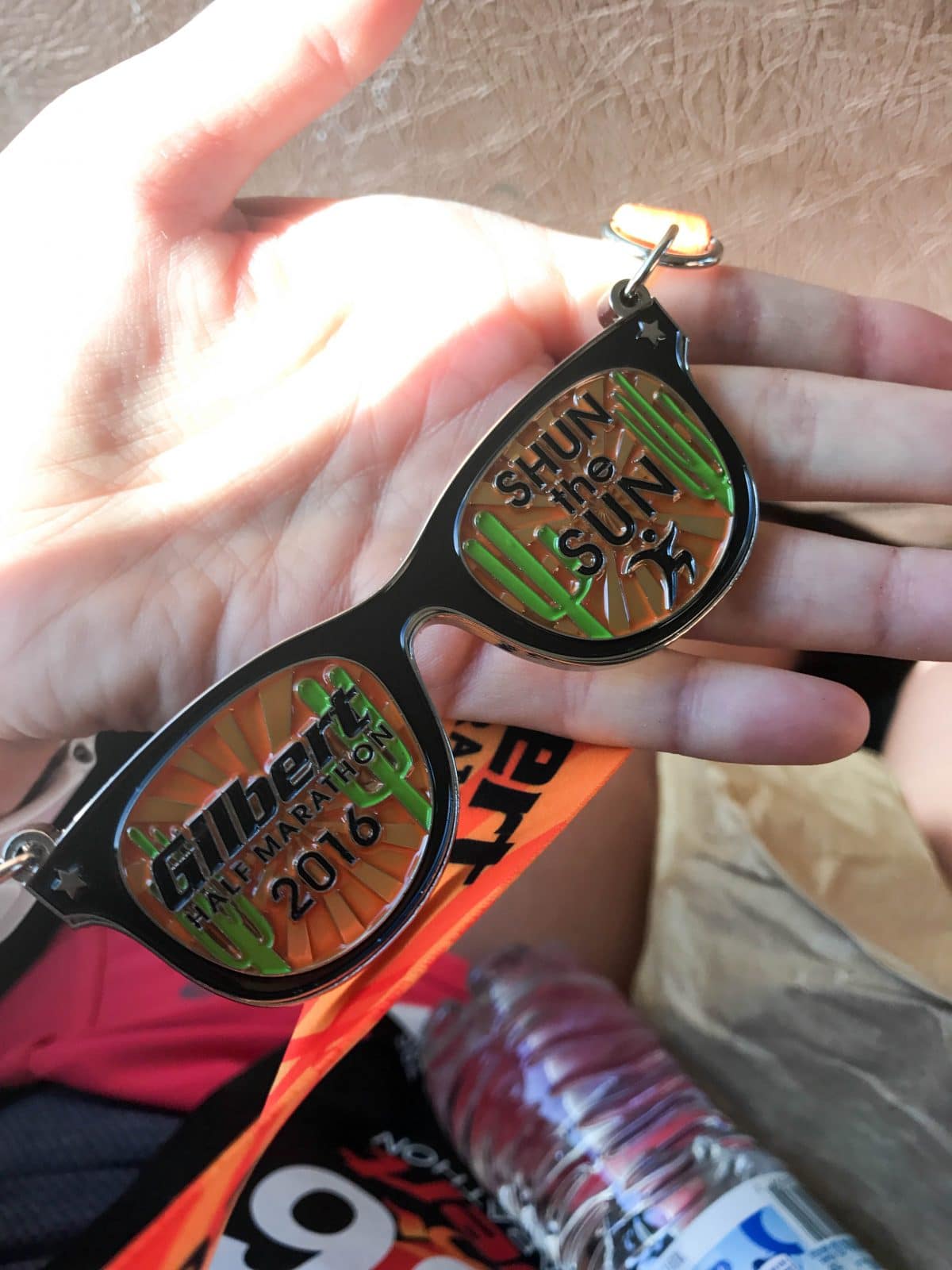 If you were following me on snapchat you know I ran the Gilbert Half Marathon this past weekend.  I didn’t do as well as I had hoped BUT my goal this year was just to get through the half marathon. I’m actually really excited I got through two, even if the time wasn’t nearly what I had hoped.

I woke up at 4:30AM and got dressed in the same outfit I’ve been wearing all summer.  Brooks Glycerin with custom orthotics from Dr.K, CEP compression socks, Target tank top, and Nike shorts.  I also put on arm warmers from the 12K’s of Christmas a few years back which I ended up getting rid of around mile 2. I never wear them so I figured they were good “throw away warmers.”  I also decided to wear my new Nathan Intensity Hydration Pack (thanks Anne for the recommendation!) I wore during the last two weeks of training.  Slathered myself in body glide, brushed my teeth, and headed to the downstairs bathroom to put sunscreen on. 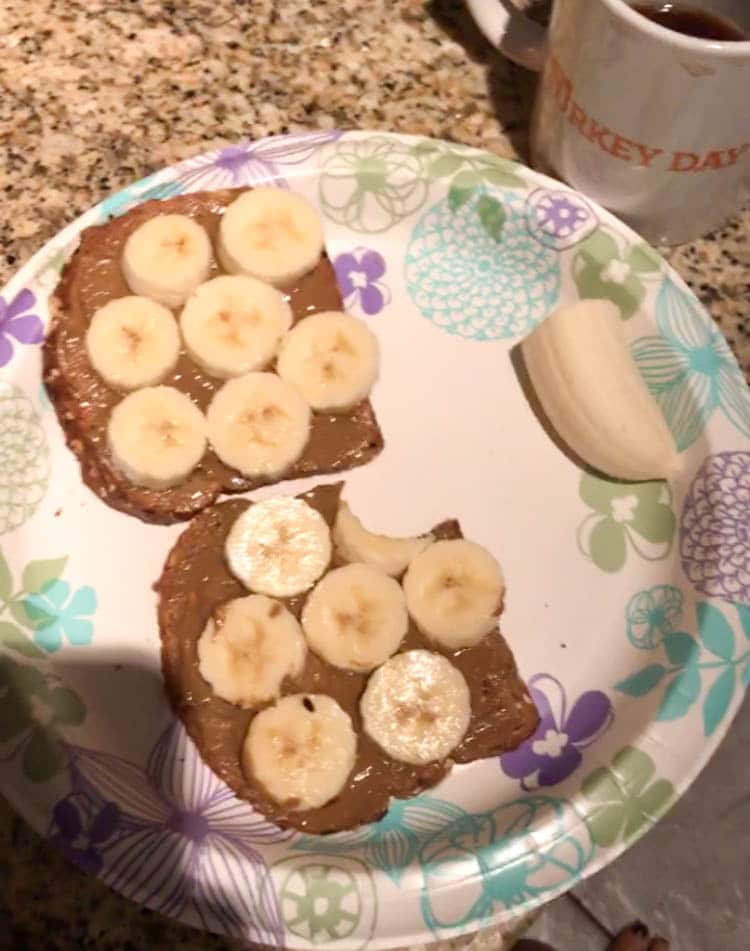 After sunscreen, it was coffee and breakfast.  I had a two pieces of thin sliced Daves Killer Bread with sunflower seed butter and banana on top.  After breakfast, I headed upstairs to foam roll, stretch, and activate my glutes.  I think this is where I failed, I should have done some of the exercises for glute and hip activation Dr.K taught me.  Instead, I opted for 90/90 shine boxes and monster walks. I also should have done some exercises right before the race started, but I didn’t.  Ugh, I’m such a high maintenance runner, it’s annoying if everything isn’t just perfect something breaks down.  I also should have done some glute activation and exercises on my taper days instead of sitting on my butt.  In my defense, I was trying to rest my Achilles as much as possible, but that shouldn’t have stopped me from doing some prep work.  Lesson learned!

I drank my UCAN (<— on salre right now, 15 bucks off!) on the way to the race, love that stuff.  Getting to the race was difficult and the line for the bathroom was like a mile long when I got there.  Luckily they opened up the high school restrooms by the track so we were able. 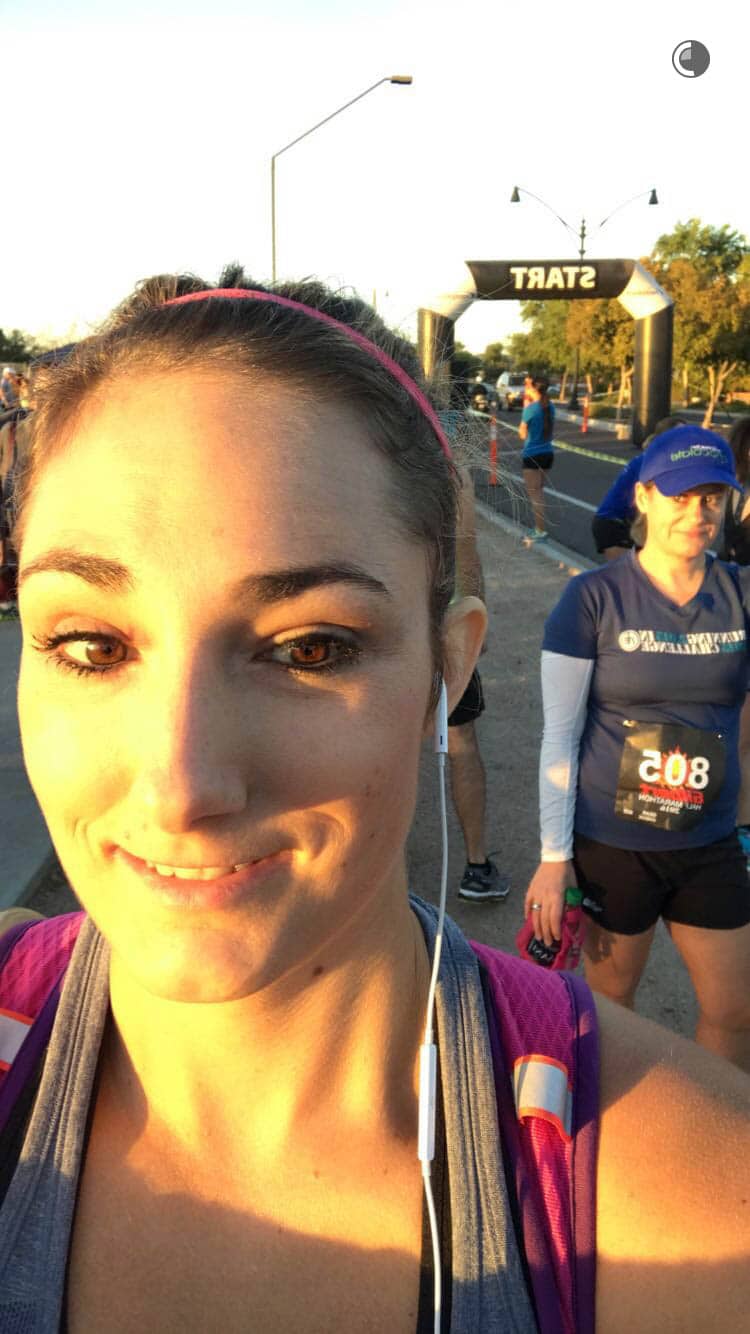 I listened to the Good Morning Pandora radio station for the first four miles, then changed to my running mix I made for the Phoenix Women’s Half.  The corals were easy and everything was actually very organized.  The first four miles felt freaking amazing.  My pace seemed comfortable and I thought I had it in the bag.

Then out of nowhere my hip tightened up on me.  So I stopped and tried to stretch it out and that helped for a while, then it came back.  Basically, that was the story for the rest of the race, battling hip tightness.  Stop, stretch it out, run, and repeat.

I thought that was hysterical, I don’t care who you are or who you voted for, that’s funny.

10 -10:48 I unexpectedly saw Mr. Hungry who texted me telling me that he couldn’t get to any of the spectator spots and would have to meet me at the end.  Although seeing him made me feel good, it didn’t give me the boost I needed to ignore my hip tightness. 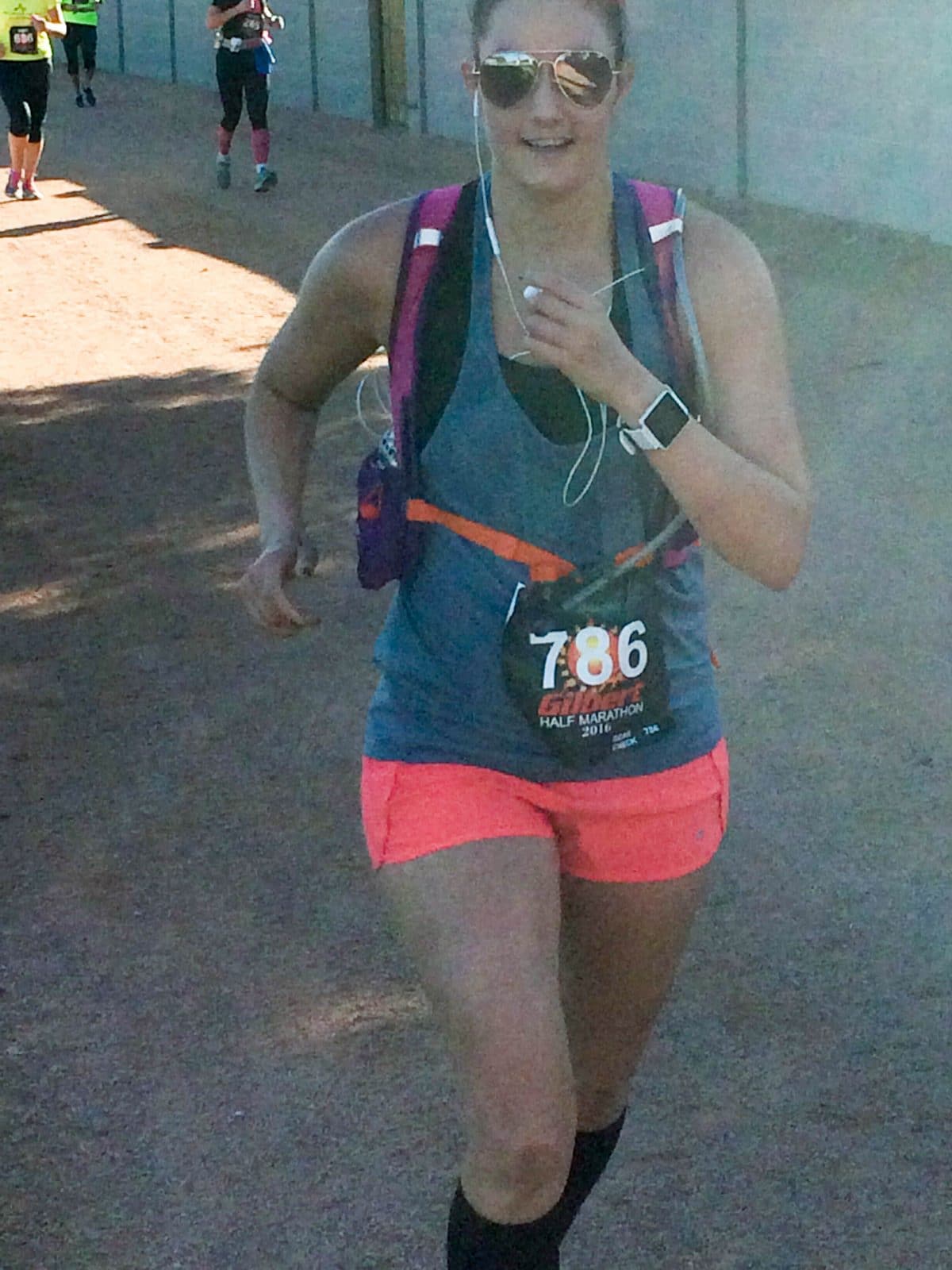 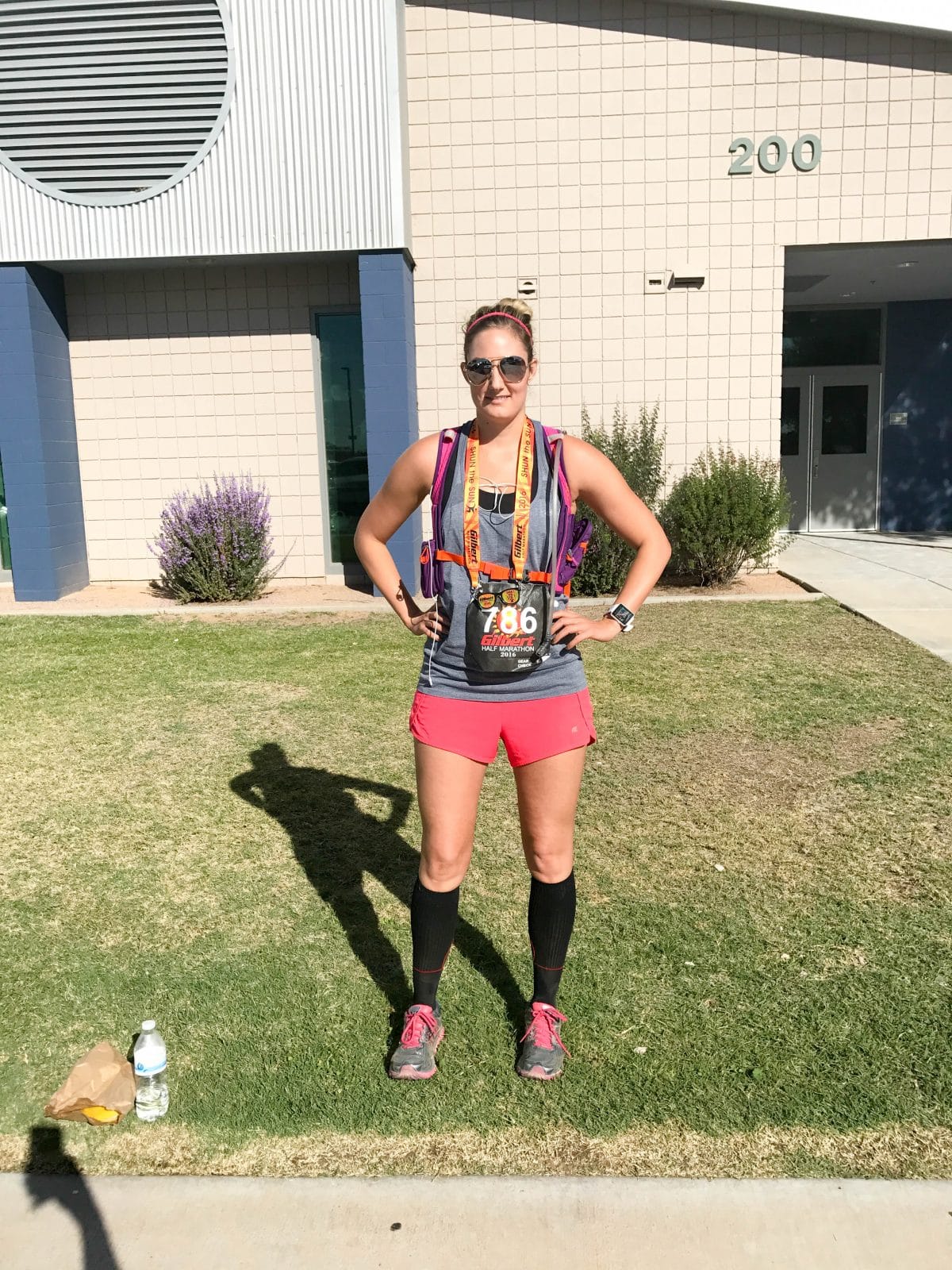 About 30 seconds faster than the half I ran in January where my Achilles broke down.  Maybe this year’s (2017) goal should be to run a half marathon without any weird pain or injuries.

A lot of my weird injuries are probably due to a total absence of functioning hormones so I’m excited to see what this year will bring.

In the mean time I looking forward to seeing what I can do in the Turkey Day 5K.  I’ve never run a 5K race before so I’m really excited to see how that goes! 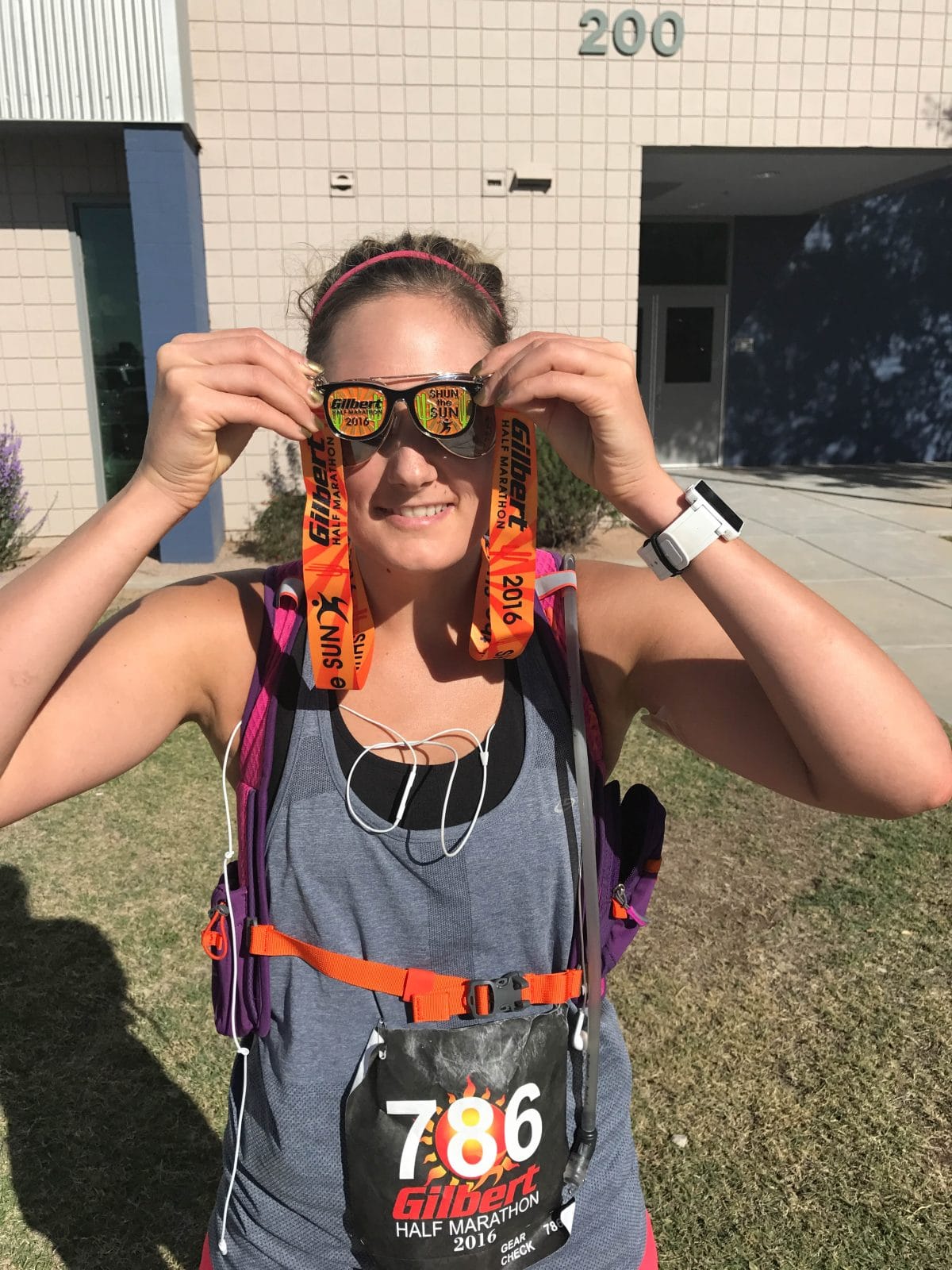 After the race…well first we had to go to Lowes, which I complained the whole time about.  Our facet in the downstairs bathroom needed to be fixed, then we went for breakfast/lunch.  But first… a cookie…. 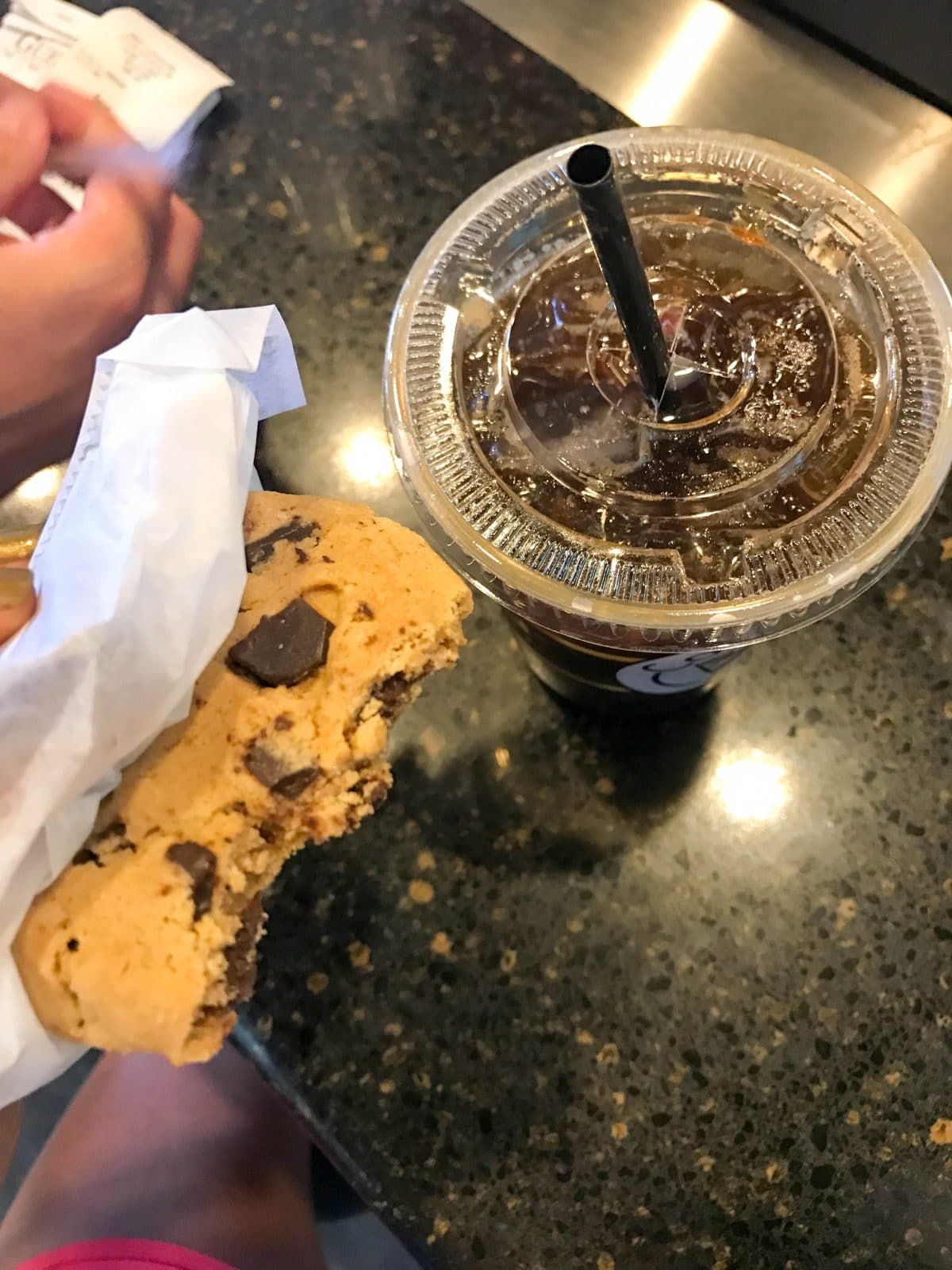 For breakfast, I had a breakfast burrito, same as after my 12-mile training run.  Then I had to scramble hurry and clean the house for my SIL’s party she was having.  I cleaned like a mad woman and got in the shower as the first guest arrived.  I got ready, slept for 20 minutes and made it downstairs for the second half of the party.  Dinner was in and out with an attempt at vegetables… 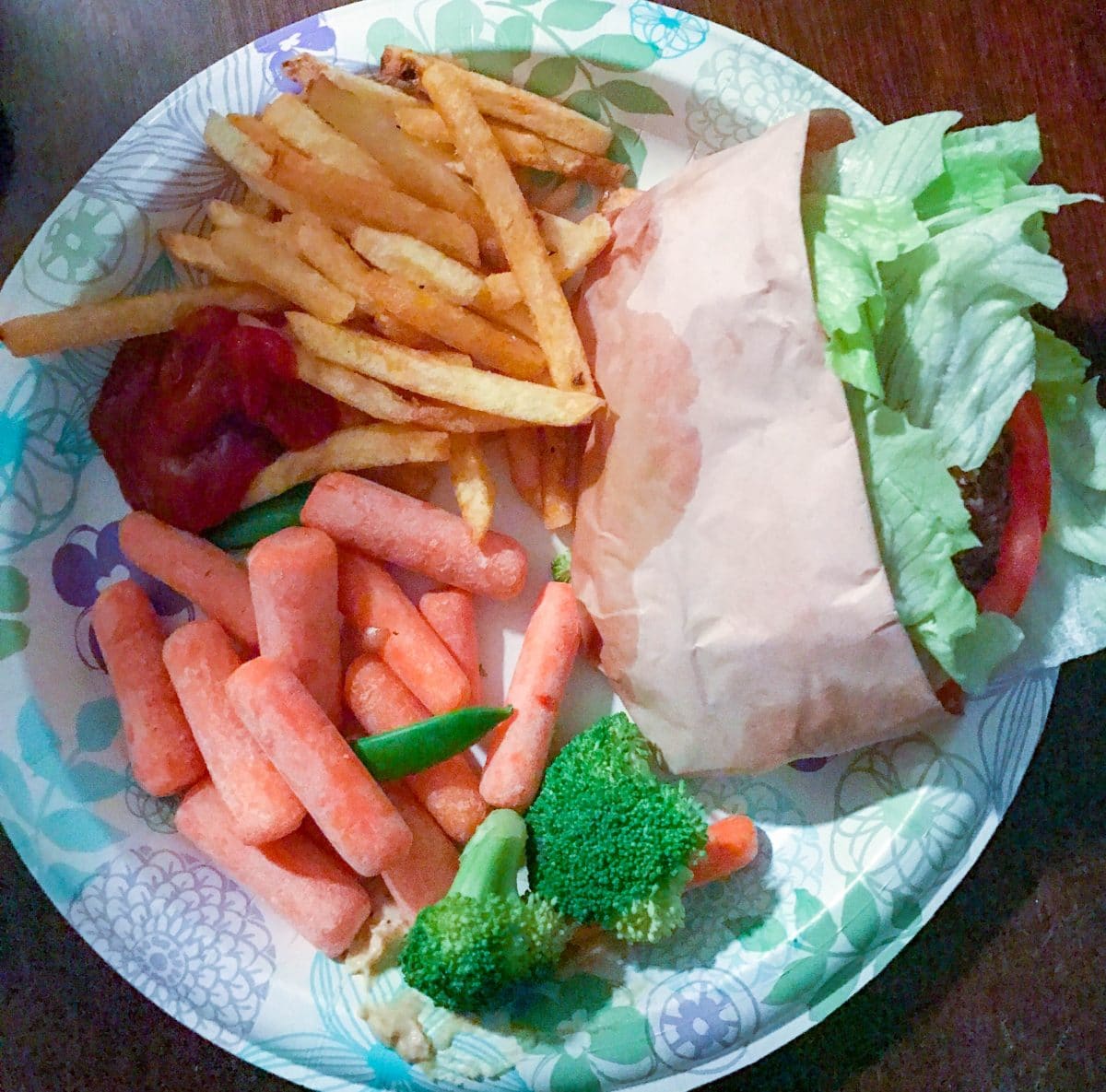 Now I am SOOOO ready for back on track Monday!