Today I wanted to pop in for an update on the end of the “fourth trimester” and baby kk at 3 months.  If you aren’t into these posts, guess what? I’ve got a new recipe coming at ya soon that I just photographed, so feel free to skip this one and check back soon for those later this week!

And here we are at 3 months, the end of the “newborn stage” and my self-proclaimed “maternity leave.”  KK has really woken up in terms of recognizing the people around him, and of course, I’m soaking up all the snuggles, throaty giggles, and gummy smiles there are. 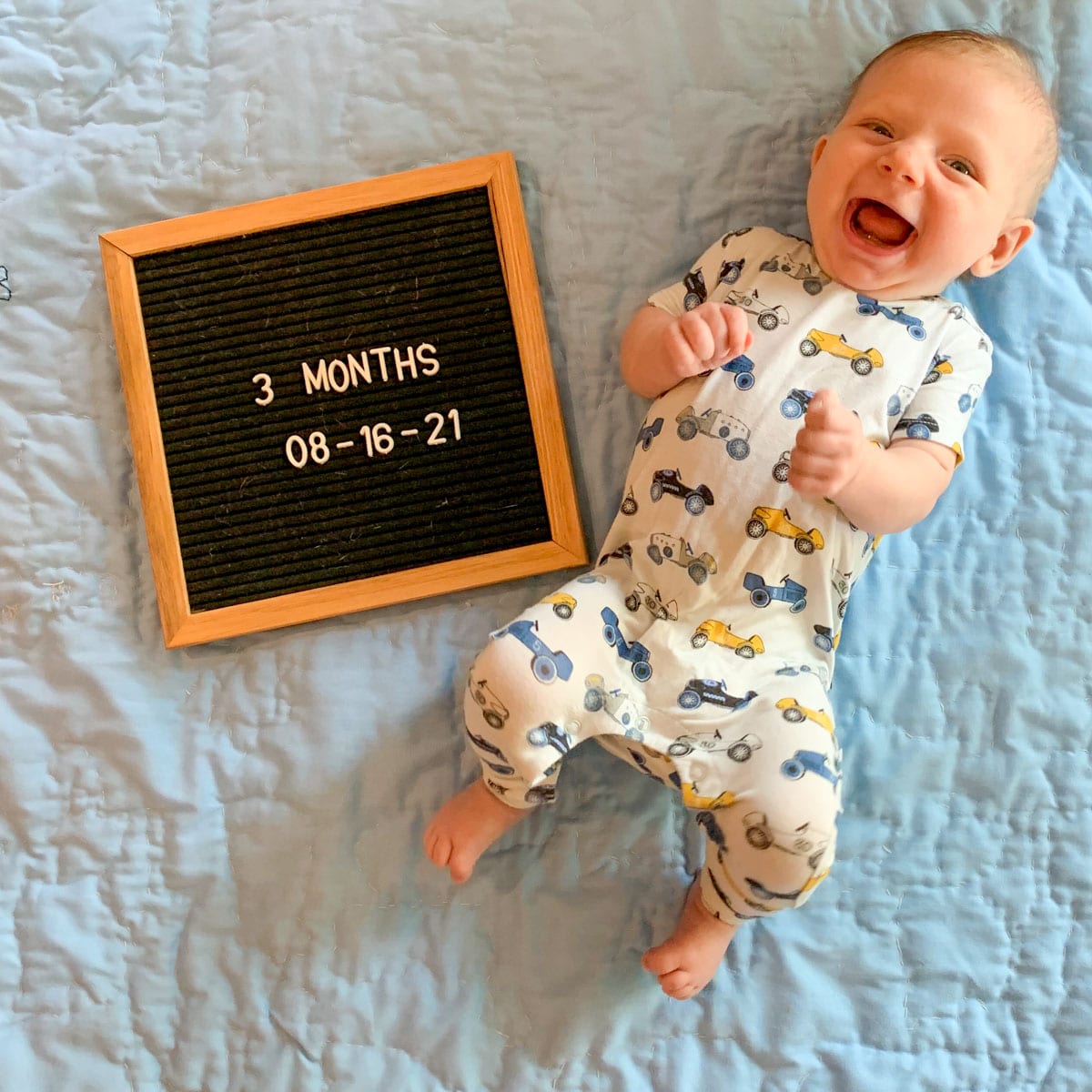 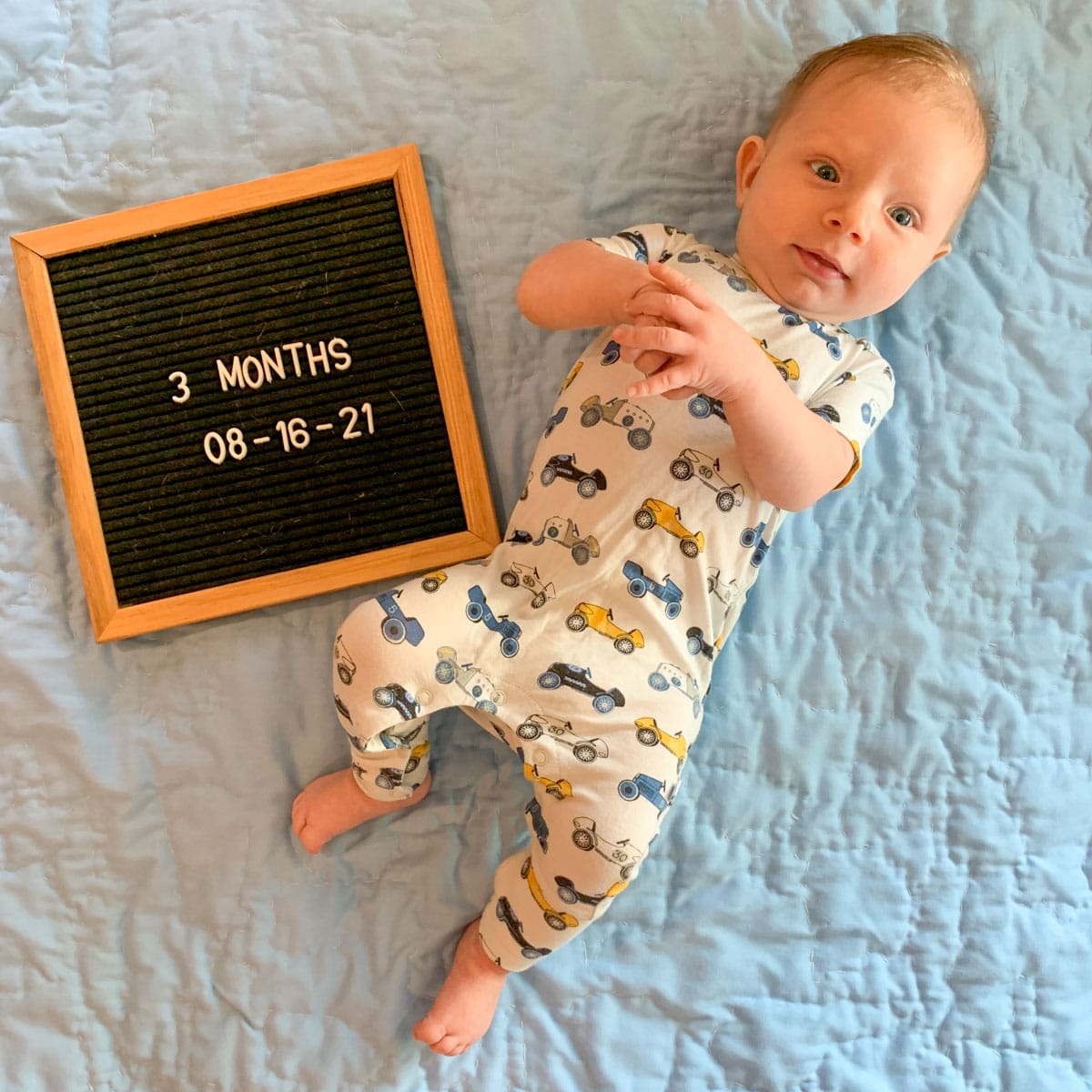 KJ at 3 months old for a fun brotherly comparison! 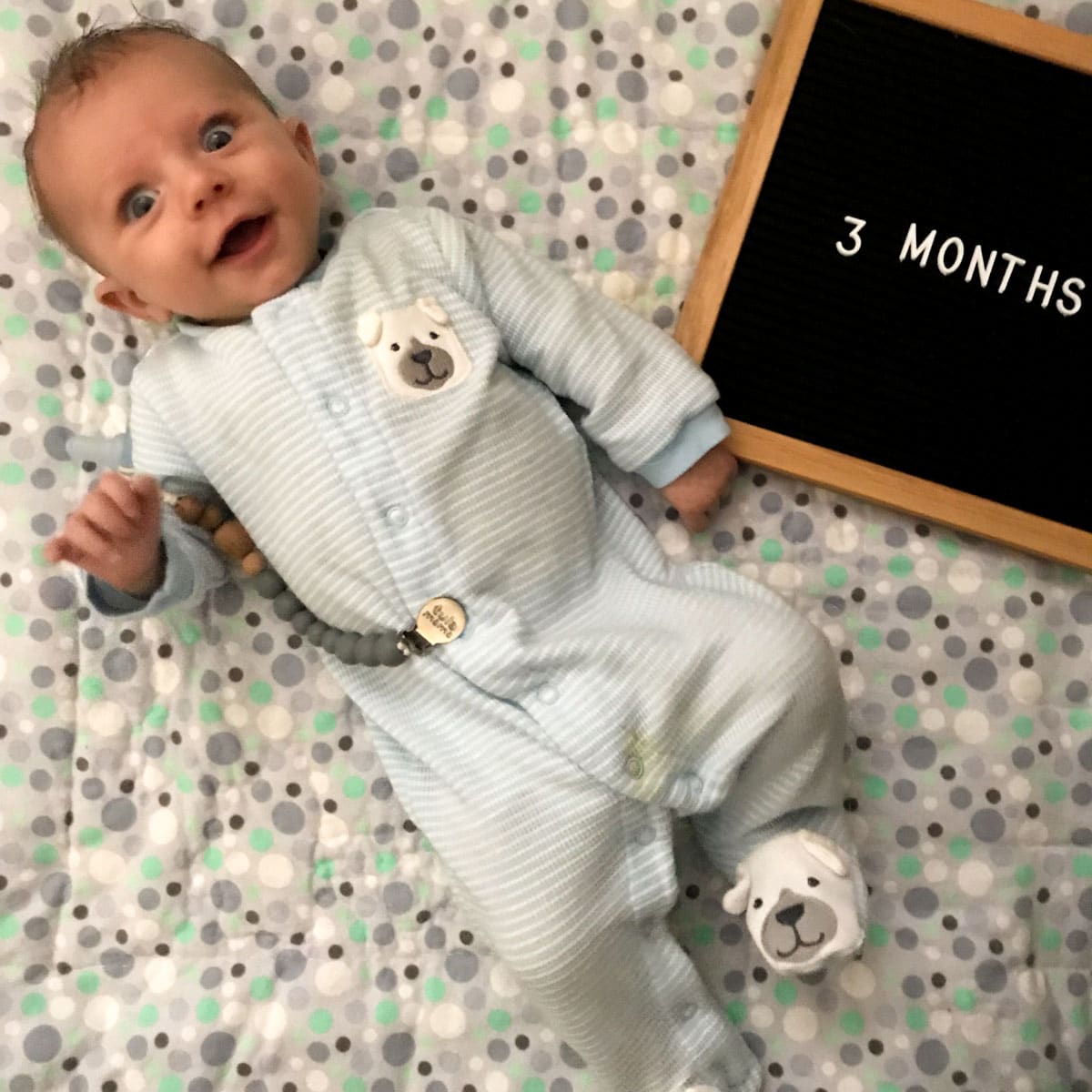 Towards the beginning of month two, KK was sleeping solid 8-9 hour blocks regularly and only waking up once per night MAX.  Fast forward to now, and he occasionally does a full night’s sleep, but for most of the last two weeks has woken up at least two times per night.  I think everyone hopes to escape the four-month sleep regression, but the fact that it came (or at least is starting) early makes it a much tougher pill to handle.

Despite my best effort over the last few months, he still does not put himself to sleep and I’ve basically given up on it.  Although I have been trying the fading technique  Also, despite my best efforts, he does not take a pacifier, which really helped KJ fall asleep on his own (and he was still up all night.) I feel like I’ve bought every pacifier available on Amazon with no luck.  One night I got him to take one with a bait and switch technique, but he won’t take one since then.  I will say, though, they can still calm him down in some cases when he’s upset. He will give it a suck or two, spit it out and then start playing with it so ya know, money well spent I guess ha ha. 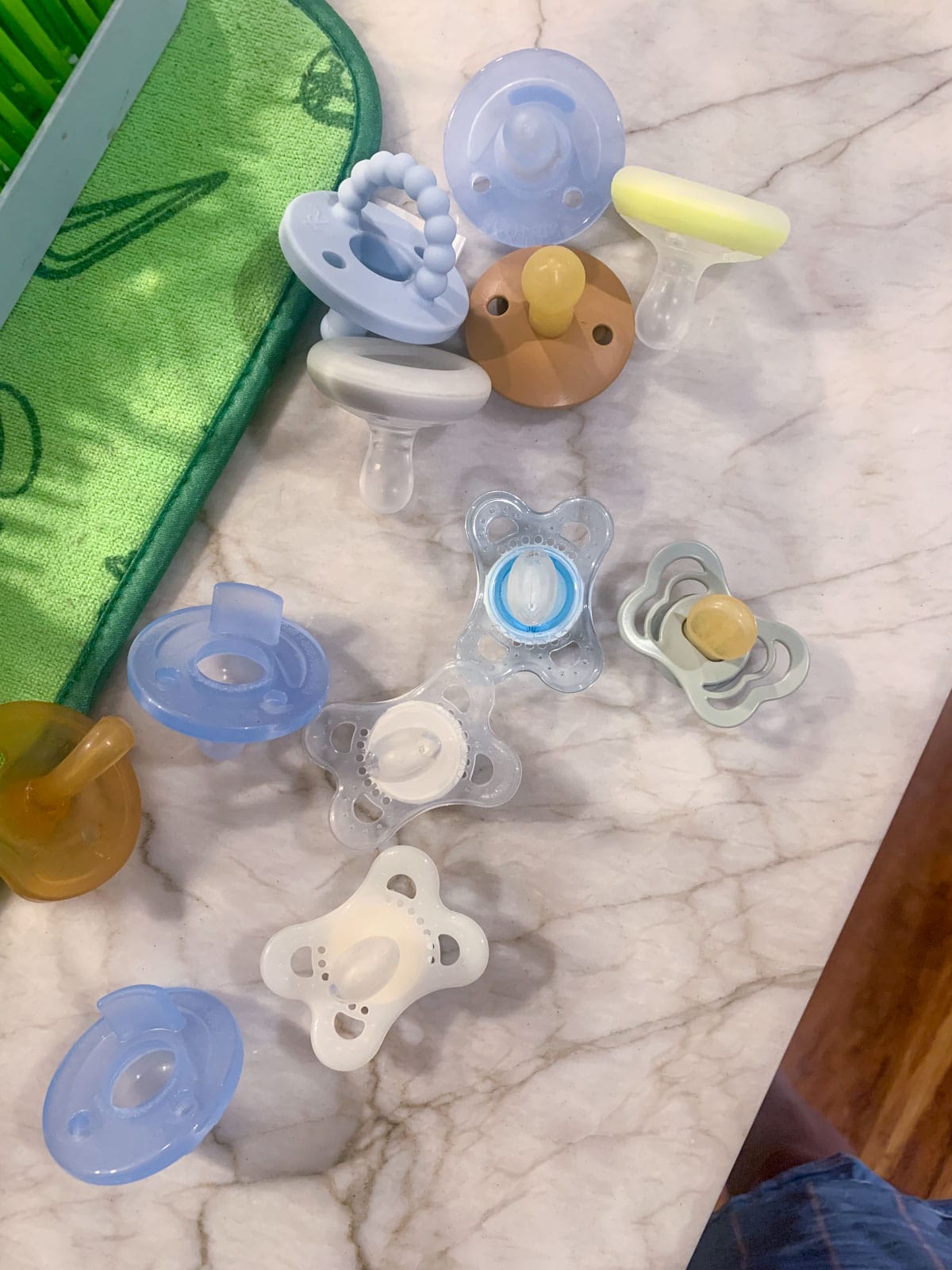 All that to say, KK has regressed in sleep a decent amount, but so far, we are nowhere near the nightmare of being up 6+ times a night and refusing to be put down that KJ was at by the end of 4 months/beginning of 5 months.  So, I’m grateful for that!  Right now, I feed him when he wakes up at night (unless it’s been less than an hour), and then if he has trouble going back to sleep, Mr. Hungry takes over and rocks him to sleep.  I keep reminding myself I have the option to sleep train as we did with KJ in a couple of months, so not to worry about it too much until then, and I continually try to remember this season is supposed to be hard and it’s also short-lived. 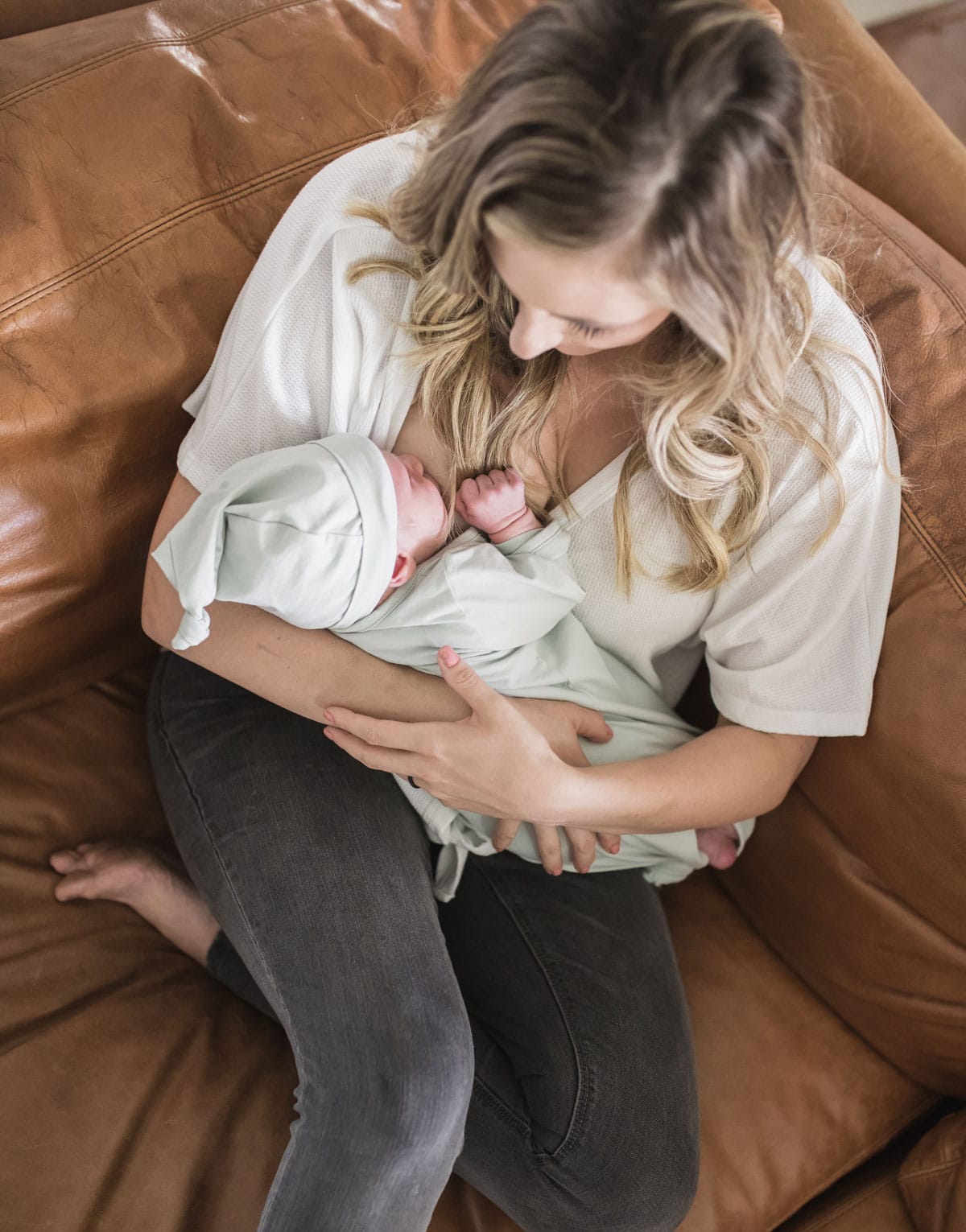 Overall we are still trucking along and not supplementing as of now.  His weight gain was fine by the doctor at his last appointment but a little lower than it had been on average.  But, right after that appointment, he went through a growth spurt where he wanted to nurse every hour, and I’m guessing he caught up then.  I’ve been monitoring it on my home scale, which isn’t that accurate, but it’s something.  Either way, the doctor said no weight or checks until four months were needed, so I hope we’re fine.  If I’m honest, it’s hard to trust my body after breastfeeding was an everyday uphill struggle with KJ, but I’m trying! 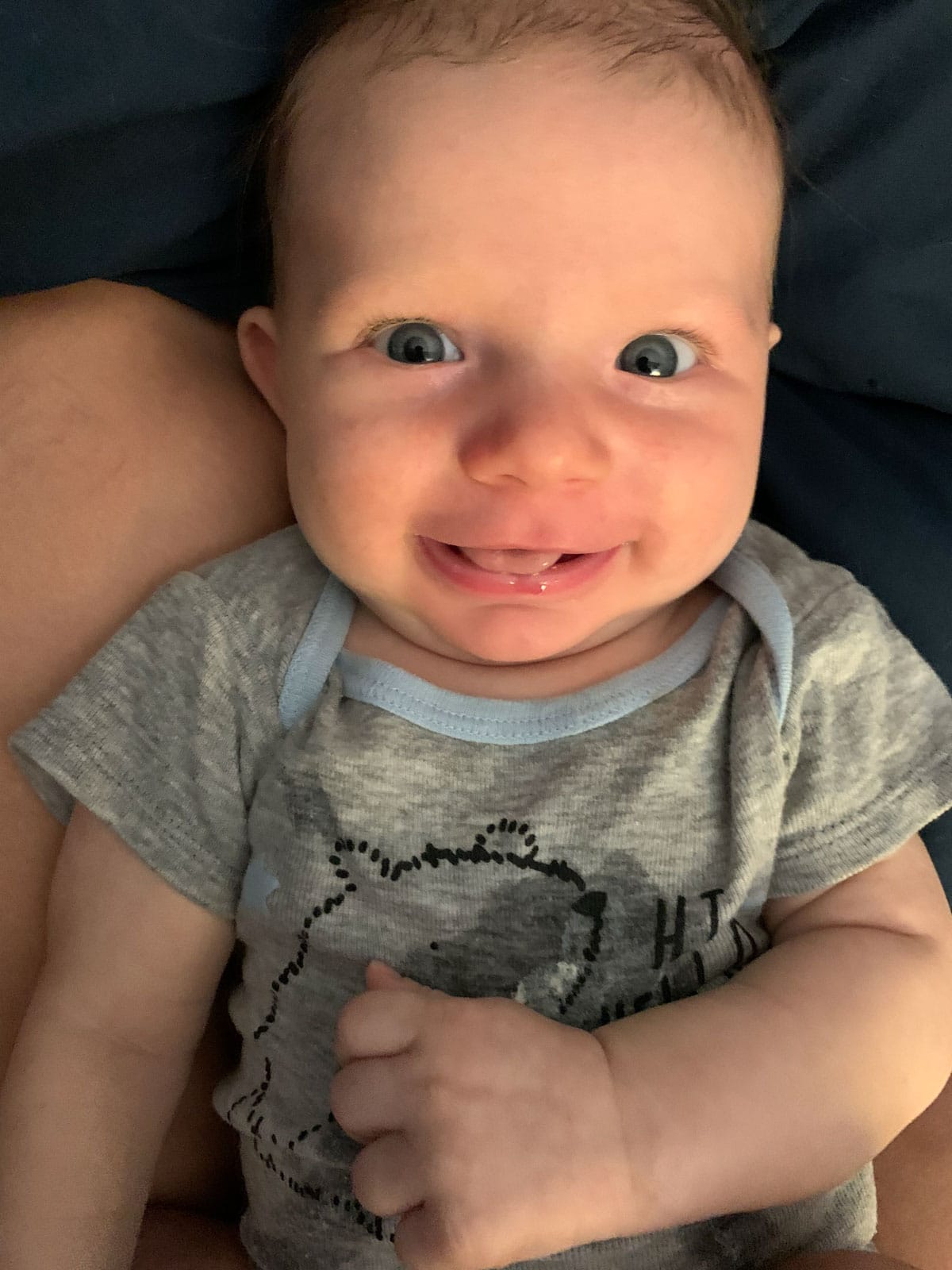 Overall, KK is a great nurser. He still has a great latch (KJ’s had narrowed up at this point pretty significantly) and definitely loves to comfort nurse as well (#doesn’ttakeapaci #iamthepaci.) Like most babies this age, he gets impatient when my letdown is slow (can sometimes be up to five minutes) but, I stand up and bounce around, sing, and cuddle him till the letdown comes.  With KJ, I remember being VERY stressed about this issue because he was way less patient, and we had the weight gain issue, and stress only delays a letdown reflex even longer.  This time I don’t stress as much, which makes things a little smoother.

Around 1.5 to 2.5 months, I was getting up every night to pump and pumping before I went to bed. This really helped keep a strong milk supply and built my freezer stash when he was sleeping long chunks at night.  I’m not getting up now, though, because his wake-ups are not regular. They are all over the place (#earlyfourmonthsleepregression). Anyways, now when I pump 2 ounces in a session, and he drinks 6 ounces from the stash, I’m not super worried we will run out of breastmilk soon.  I think we can at least make it till he sleeps a little longer again at night, and I can rebuild my stash.  He now drinks 4-6 ounces in a bottle which he gets whenever I’m unavailable to nurse, such as on a client call which is usually 1-3 times a week, so super minimal.

Oh ya, and I’m still dairy and egg-free.  Although I have been occasionally having sauces made with eggs like those made with mayo without a noticeable issue!  (He has MSPI like KJ did, but not quite as severe.)

I’ve mentioned about a bajillion times that this recovery seems so much harder.  I don’t know if that was because of the natural childbirth, second child, summer heat, or what but, it’s definitely been an uphill battle. However, just recently, I’m starting to feel my strength and cardio coming back.  I’ve been increasing my weights. However, still only at about 50% of what I did pre-pregnancy, I just started very lightly jogging, and I have about 20lbs to lose still (the same amount I had to lose at this point after KJ).

On a positive though, I love the Expecting and Empowered Post Partum Guide! I feel like the guide pushes me to keep building when I maybe might have held back too long, but also build me up safely with lots of functional training incorporated within each workout day.  (Use code HungryHobby10 for a discount on any of their programs!  I loved the pregnancy guides as well!) 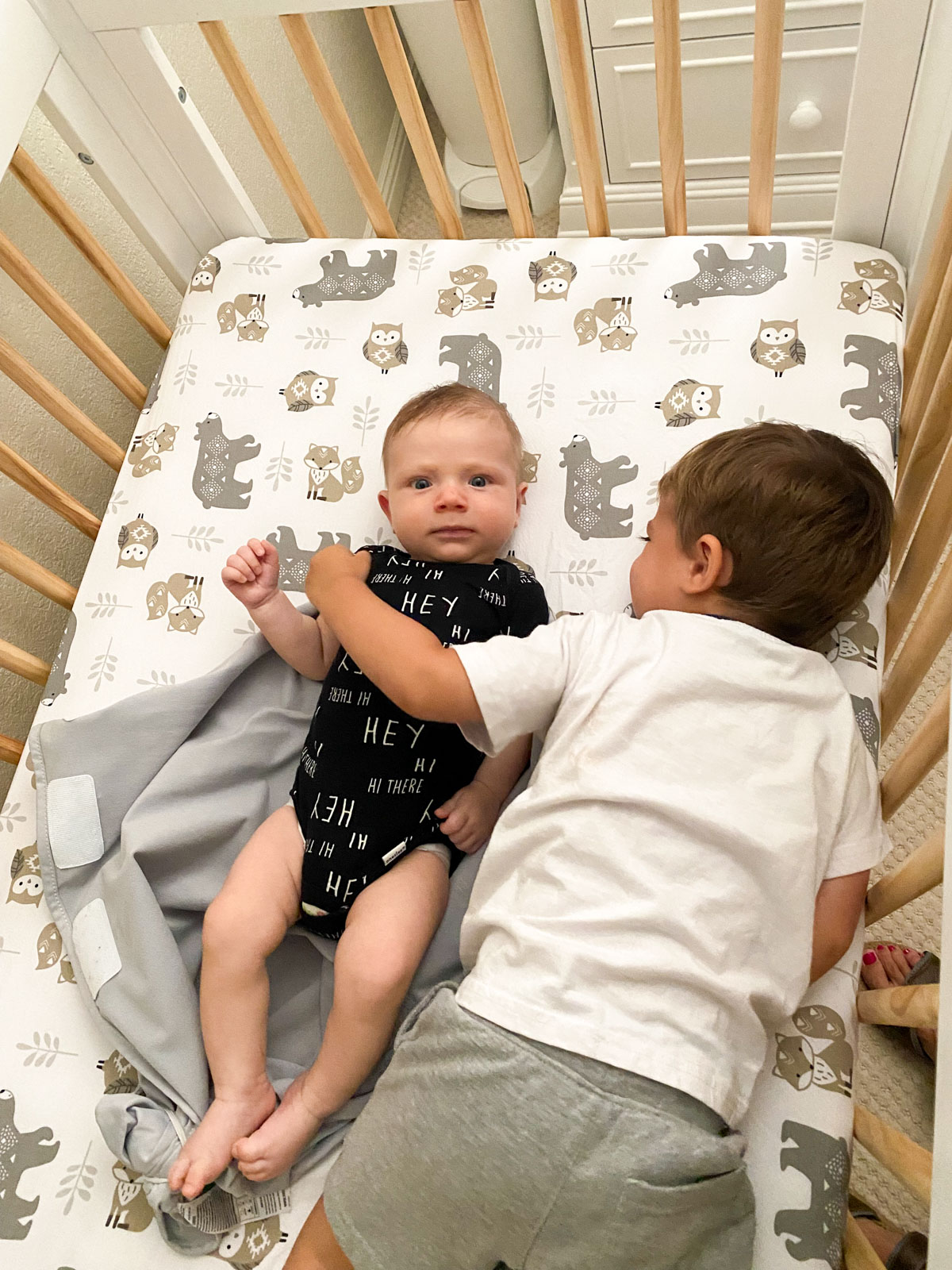 I feel like our family dynamics are ever-changing. But, overall, KJ has been so welcoming of KK.  He loves to hug him and bring him his stuffed animals, and generally love on him.  We had almost no more instances of KJ screaming, “Mama no hold the baby,” and more instances of “Mama, let’s go get KK or Mama, KK is sleepy,” so we’re on the right track!  In fact, at preschool KJ melted everyone’s hearts by loving up on the baby dolls saying they were KK.

I heard this saying the other day:

I don’t know what having three kids is like, but I totally agree with the first two sentences.  There is never a second off with two kids, at least not right now while they are so little.  Of course, KJ dropping his nap didn’t help with things, but ya know, that’s life!  I’ve always kind of preferred a busy life, though, so for the most part, I’ve done okay with the adjustment.

In hindsight, I probably should have staggered starting up work because I just jumped into clients, blogging, and my classes starting all at once.  It feels good to get back to my work that I love and I’m so blessed to work from home, but like with everything there are pros and cons.  I never get more than a 20-45-minute solid uninterrupted chunk of work done at one time.  I can never just sit down and finish a task and I always feel behind. But every night I go to bed so happy.  My heart is full even when I’m exhausted from balancing work, breastfeeding, and toddler needs because I love what I do and I love my kids, and for that, I know that I couldn’t be more blessed to live the life I do.