Welcome back to another round of Friday, Fitness, Food, and Favorites! I snapped this picture for a friend last week while we were texting. It’s my season of life right now, and I wouldn’t have it any other way! 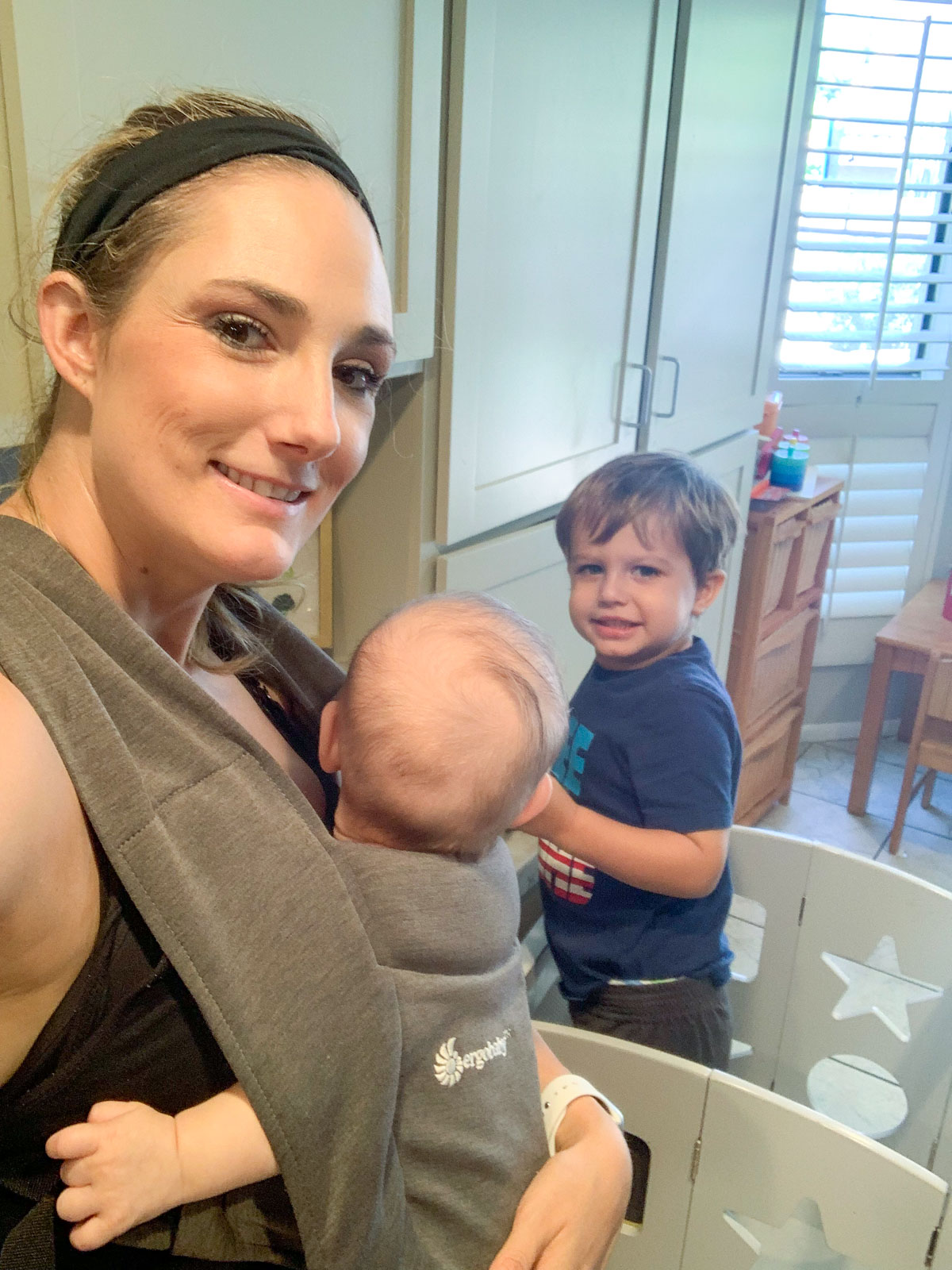 Life is busy, messy, and chaotic at times right now.  I’m always picking up the house, just to see it torn apart five seconds later. Even on the best of days, the days I feel like I’m killing it, there aren’t enough hours in the day to get everything done.  But recently, I’ve had several friends not return to work until their babies were six months or older.  They reminded me, it’s okay to work at a slower pace the next couple of months while the baby is still 99% exclusively nursing (minus some oatmeal for weight gain.)  I’ll never get these two months back with either of my boys, and I need to enjoy them.  I love that I have work that I’m so passionate about, but it will always be there but, my boys won’t always be this little.

So, I just keep reminding myself that it’s okay if not every recipe I planned gets shot or every (or any video.) It’s OKAY. They won’t be this little long.  Kaiden, in particular, will be six months, eating solids, and a TCB graduate in just two short months.  Luckily though, I hired a new sitter, and so far, so good, things are moving along slowly but surely.  Hiring her was a BIG win for the week. If that’s all I accomplished (it wasn’t), I’d be happy.  So that’s where I am at this week, what about you?

WTE? Meal Plan subscribers, this week’s meal plan should be in your inbox! Lots of fun fall foods! 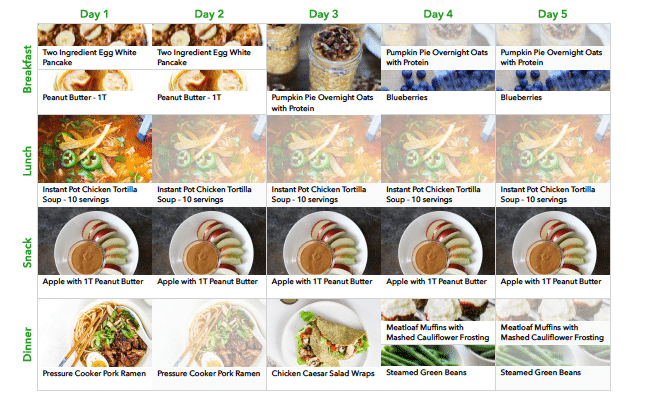 And don’t forget about the Six Week Anti-Inflammatory meal plan I posted. Now is a great time to get it done before the holidays get here!

For my dairy-free, Mama’s out there craving biscuits and gravy, my FIL made some last weekend following his usual recipe but subbing almond milk.  He also used almond milk in the Bisquick biscuit batter, and it all turned out DELICIOUS!  I was so happy not to be stuck with just bacon and black coffee for breakfast (since I’m dairy and egg-free.) 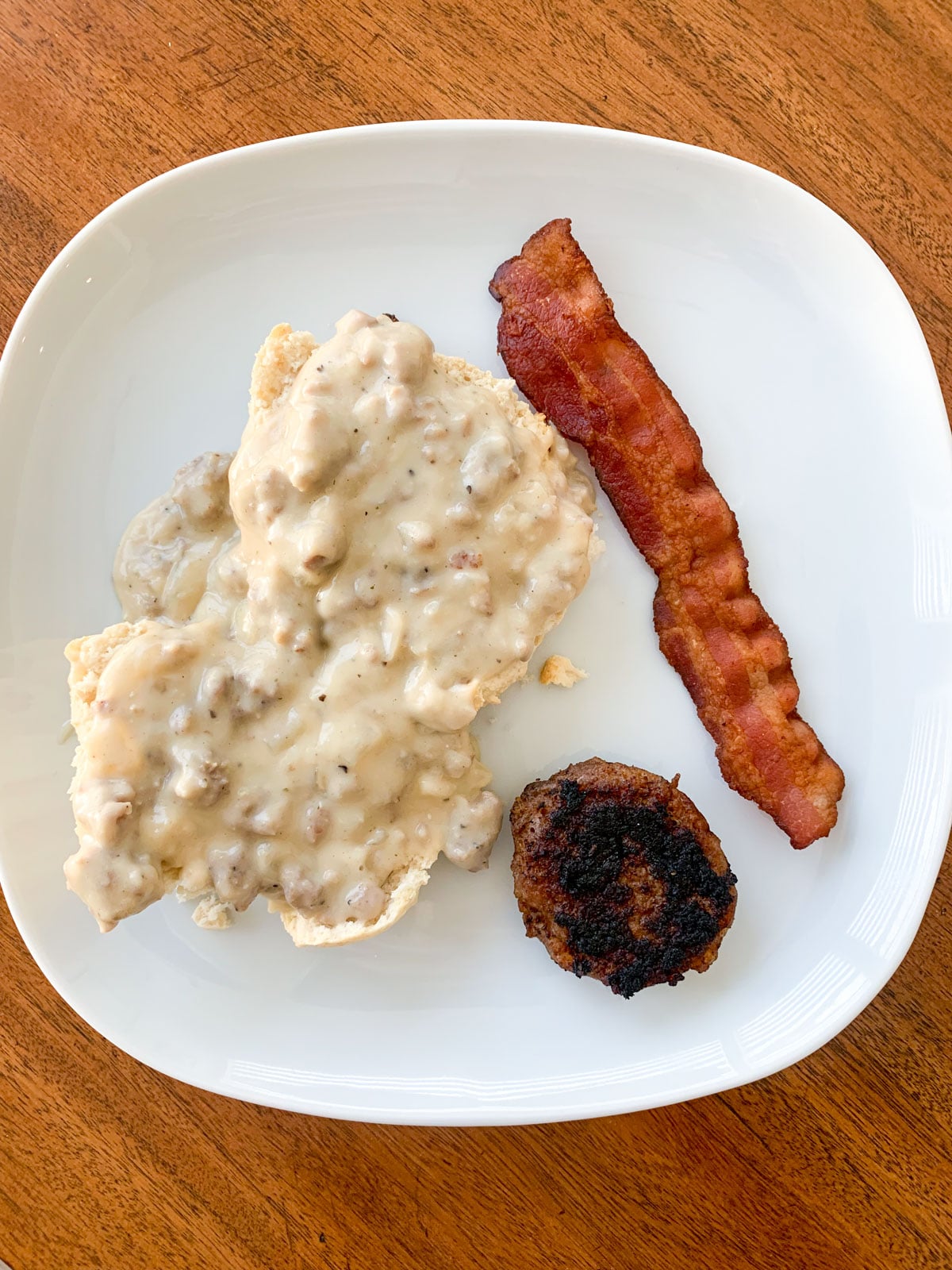 Swedish Meatballs From The Modern Proper

Speaking of NOT dairy-free, I made Mr. Hungry Swedish Meatballs with Trader Joe’s Frozen Carrots for lunch last week.  I ate the meatballs on their own before adding the gravy, and they were delicious just by themselves!  The gravy took a long time to make, but Ikea had nothing on that! 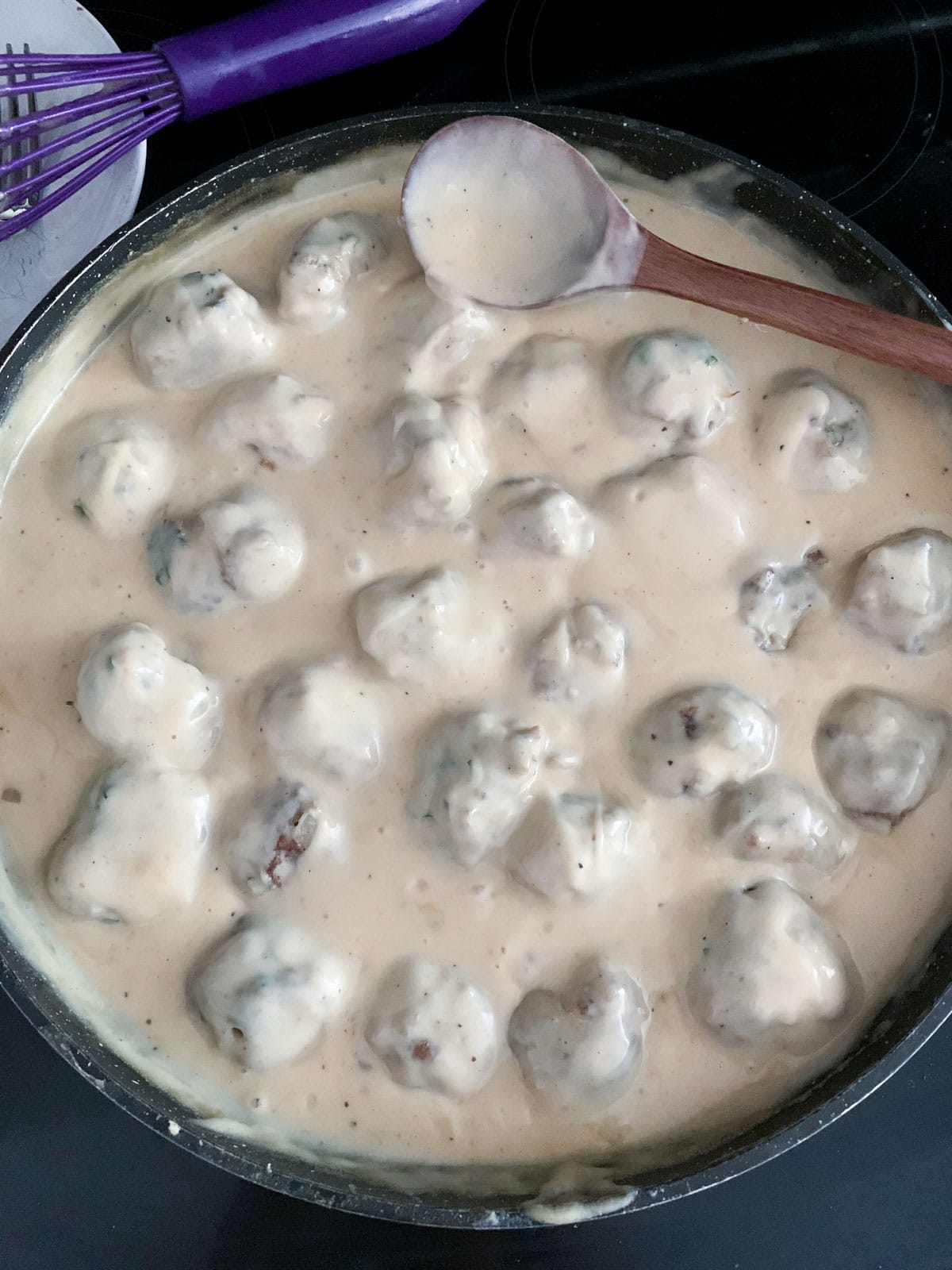 I can’t get KJ to eat regular yogurt for a long time now, but he loves yogurt popsicles!  I make them similar to my frozen cherry greek yogurt popsicles but rotate out the fruit.  Since this time, I used frozen mixed berries, which are a bit sourer than other frozen fruit. Also, I added a handful of dates for extra sweetness. 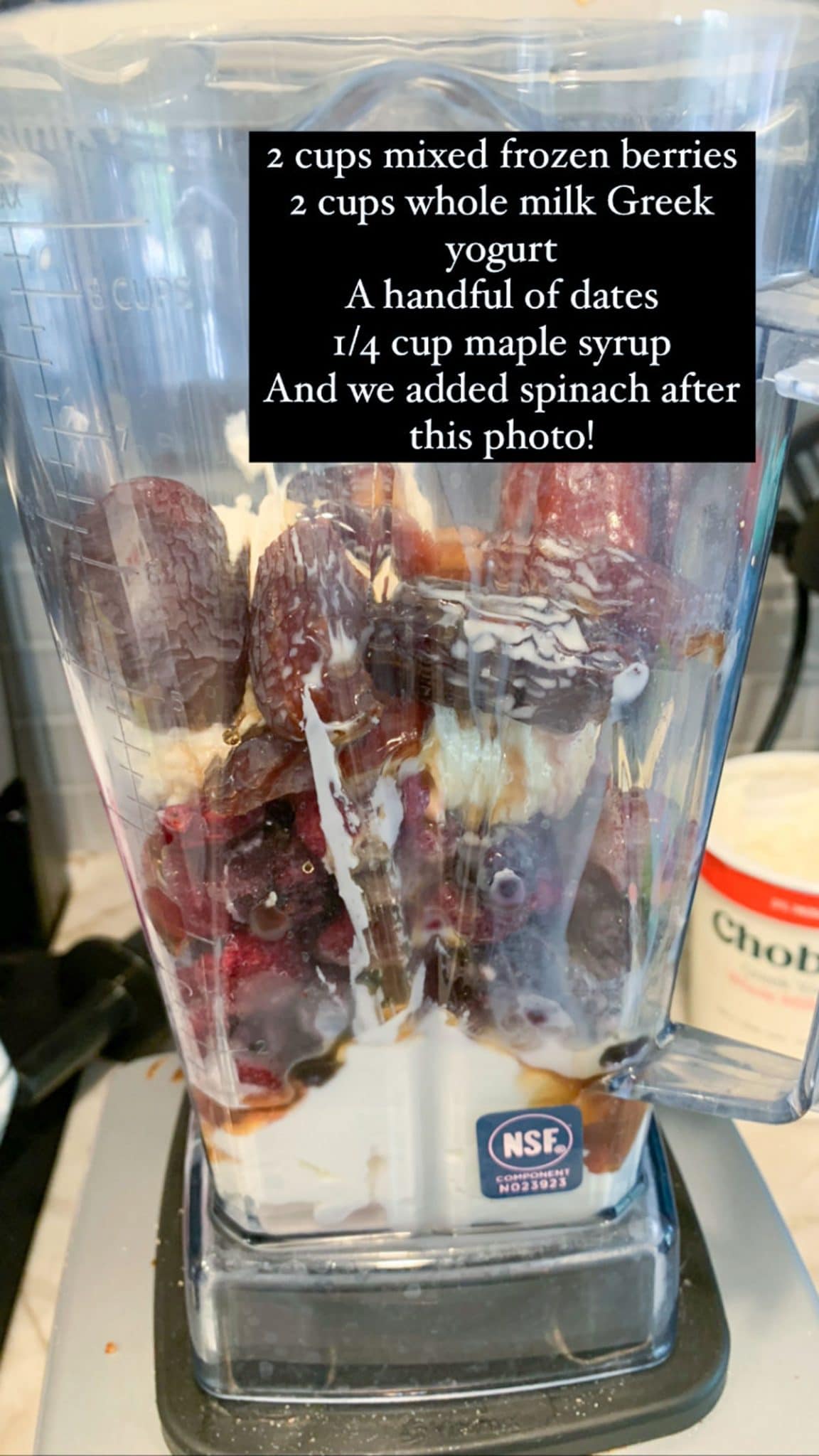 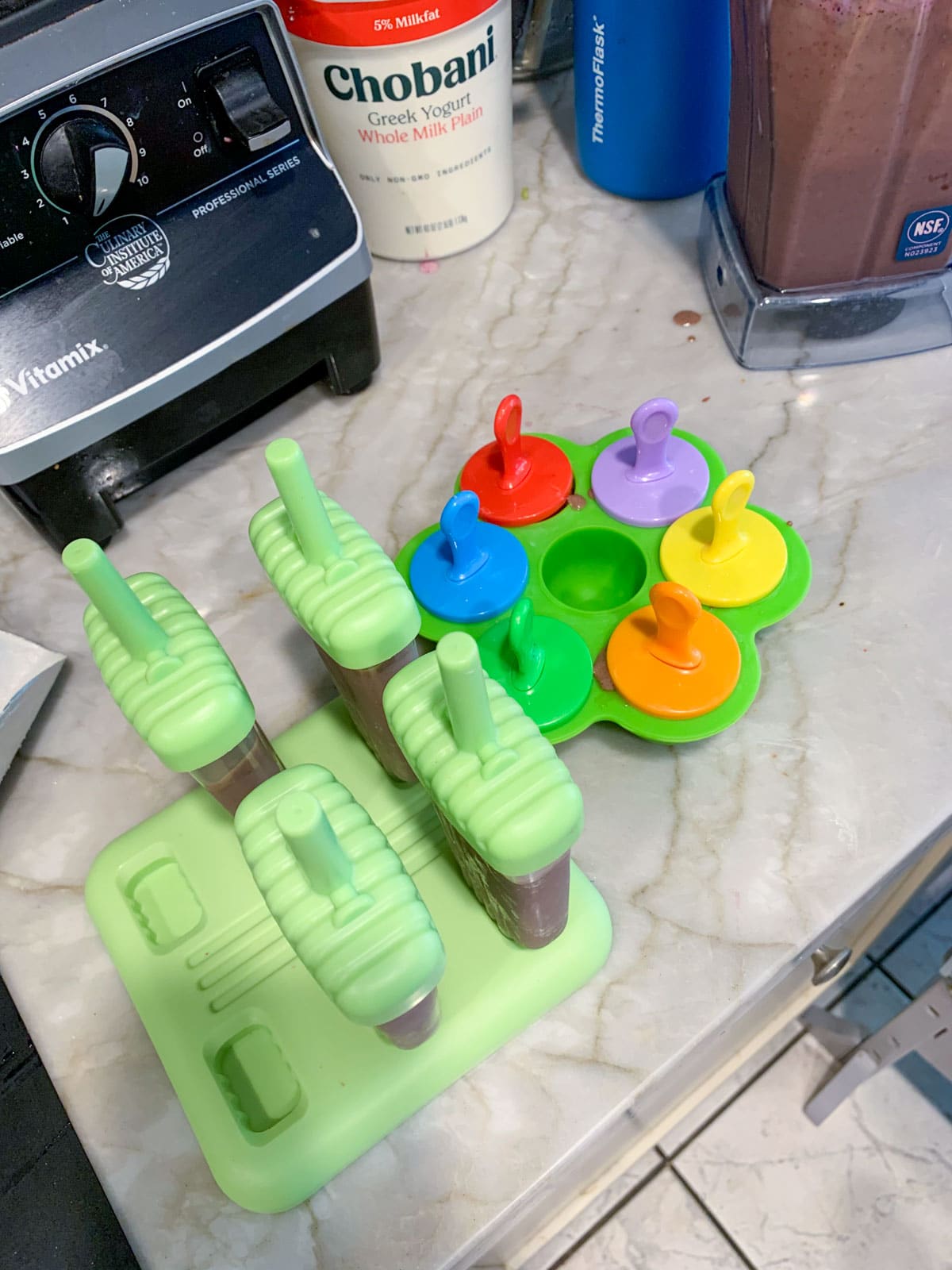 I’ve gotten these a few times in my Thrive Market boxes, and KJ likes them!  KJ loves just about anything chocolate, so these are a nice easy treat once in a while. 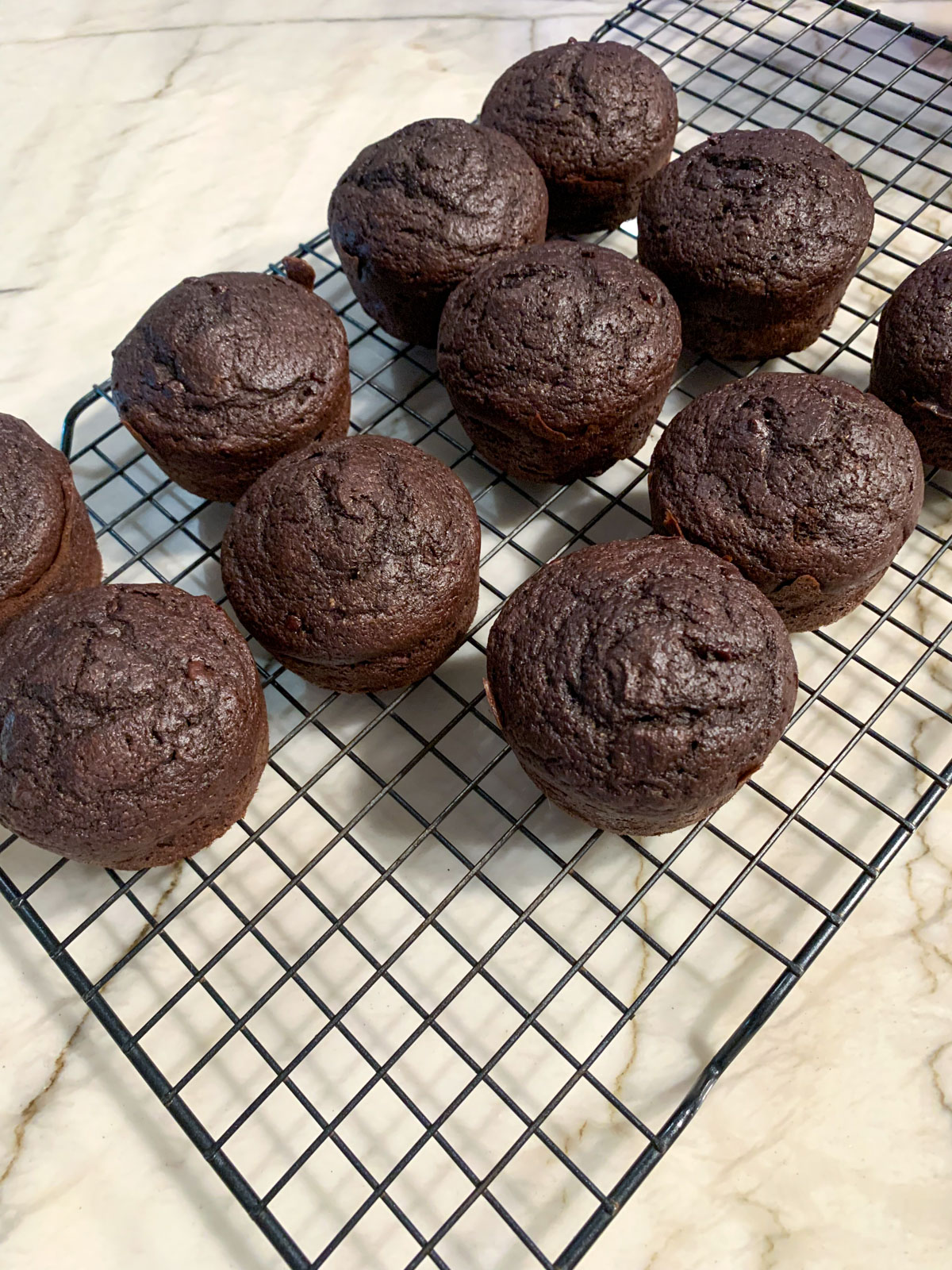 My freezer is stocked with my favorite items from Daily Harvest (the harvest bowls are my absolute favorite) for veggie-packed lunches I don’t have to think about or meal prep!  (Read my full review on Daily Harvest and get a discount on your first box!) 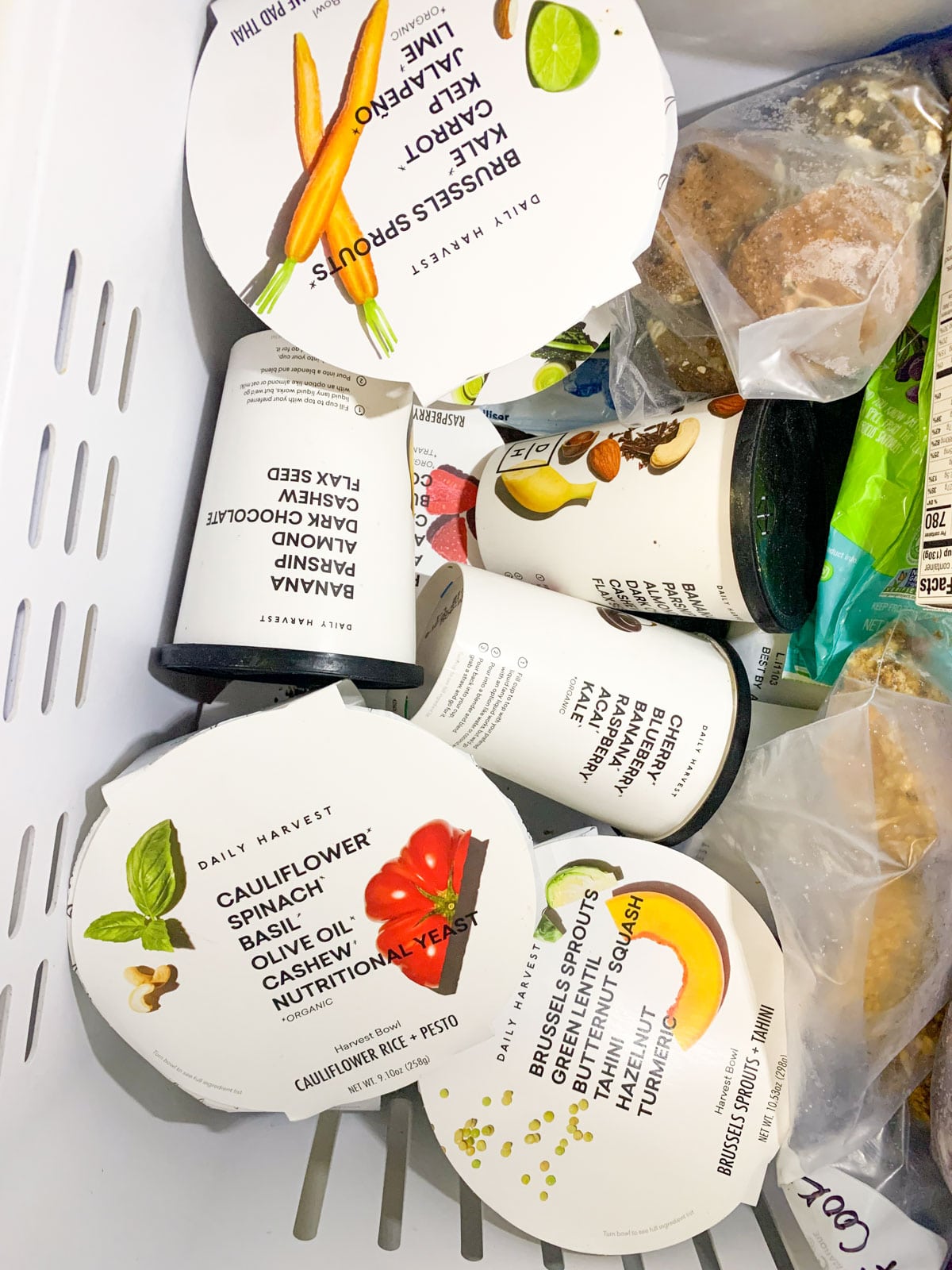 FYI Dave’s Killer Bread Makes a Rye Bread now!  I found it at Sprouts and immediately threw it in my cart!  The “rye” taste isn’t super overpowering, but it is delicious! 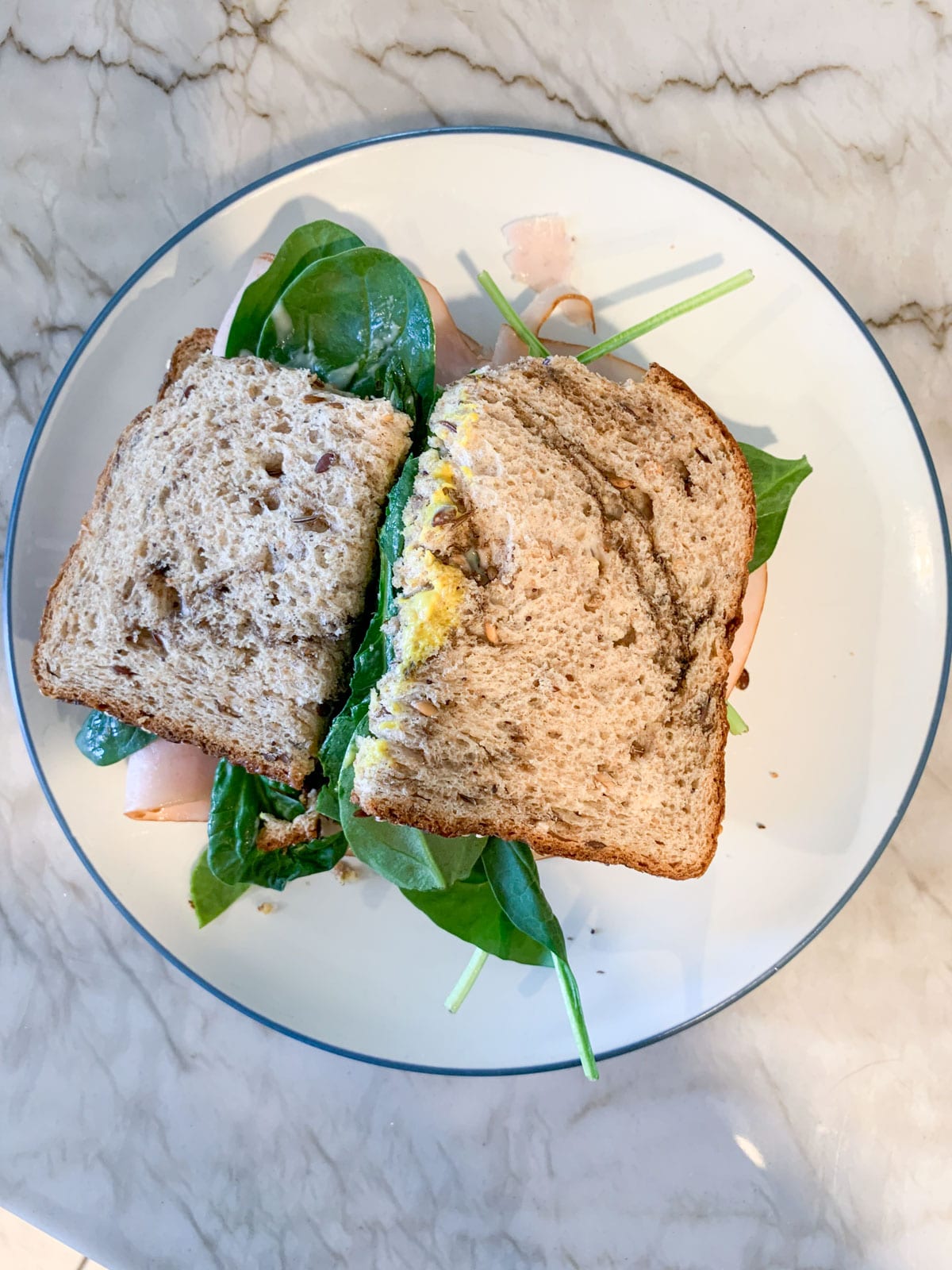 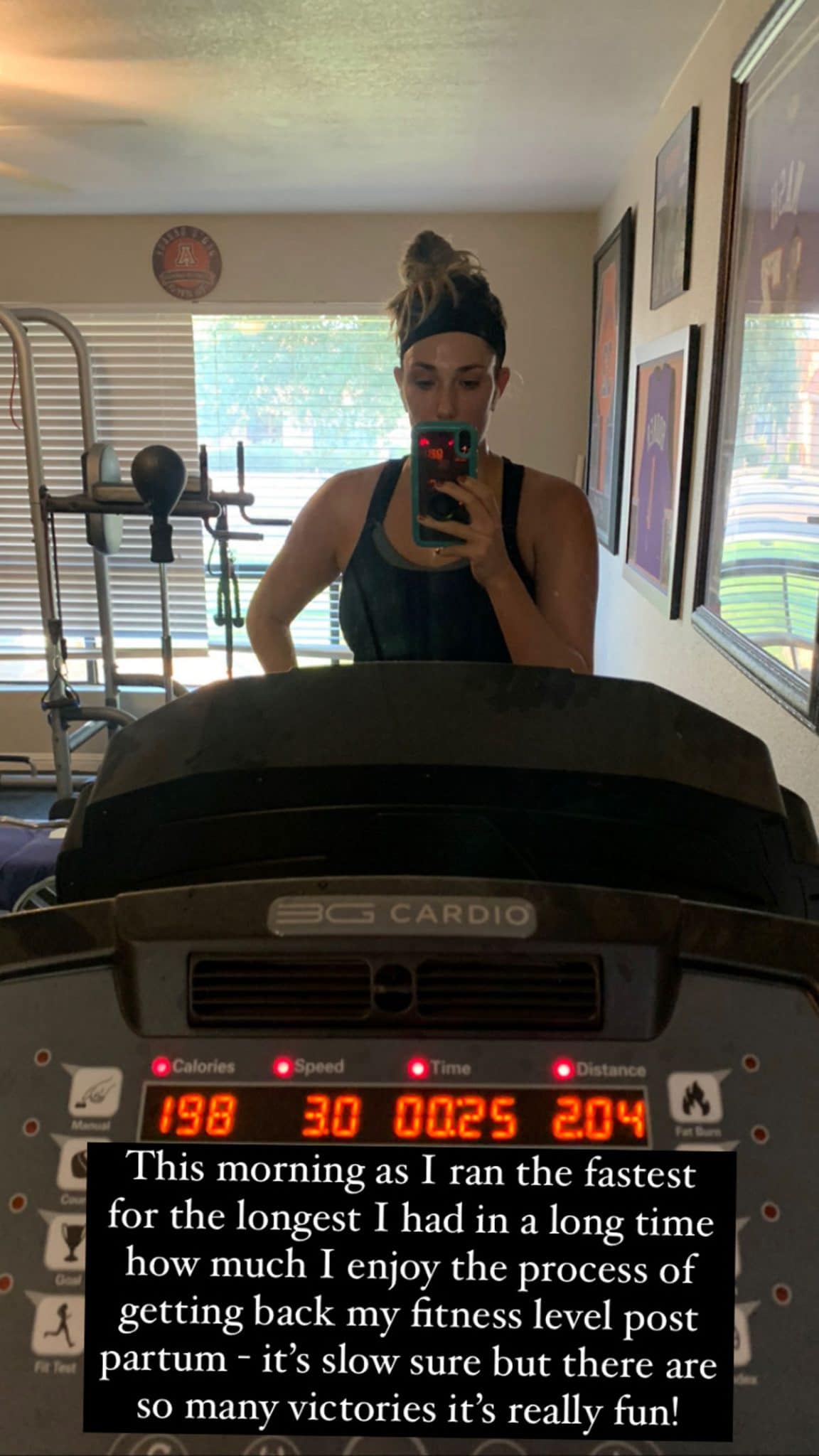 I am having fun increasing my running!  I can’t all-out sprint without some incontinence issues, but I don’t have any problems with a solid tempo pace, so that’s good! I know with time, my pelvic floor will get strong enough to sprint again.  I’ve been doing the run of your “first” 5K plan on Aaptiv.  It would definitely not be my “first” 5K, but it’s a good beginner-level program, perfect for post-partum. 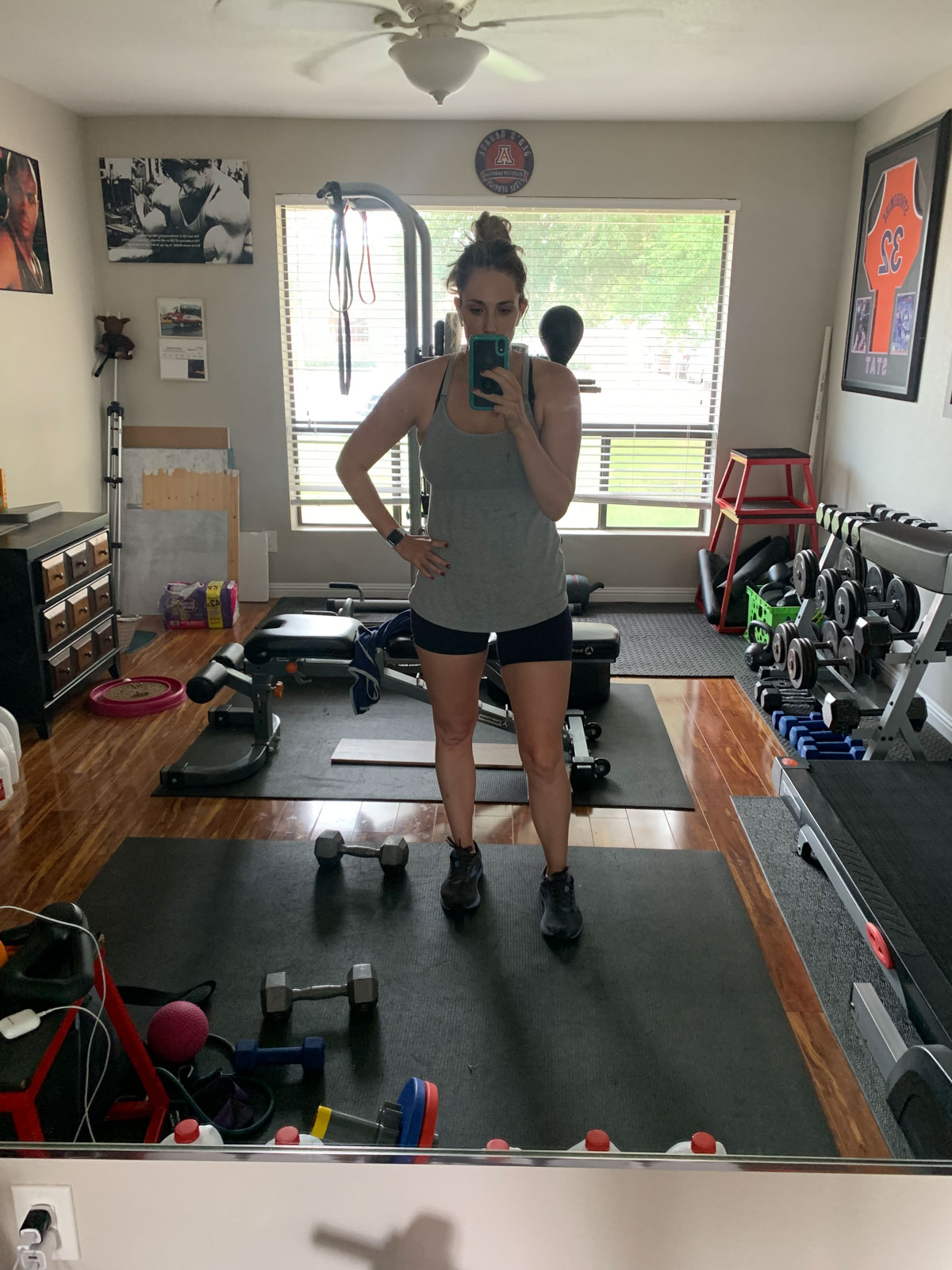 And I’m still following the Expecting and Empowered Post-Partum workouts and slowly increasing my weights! 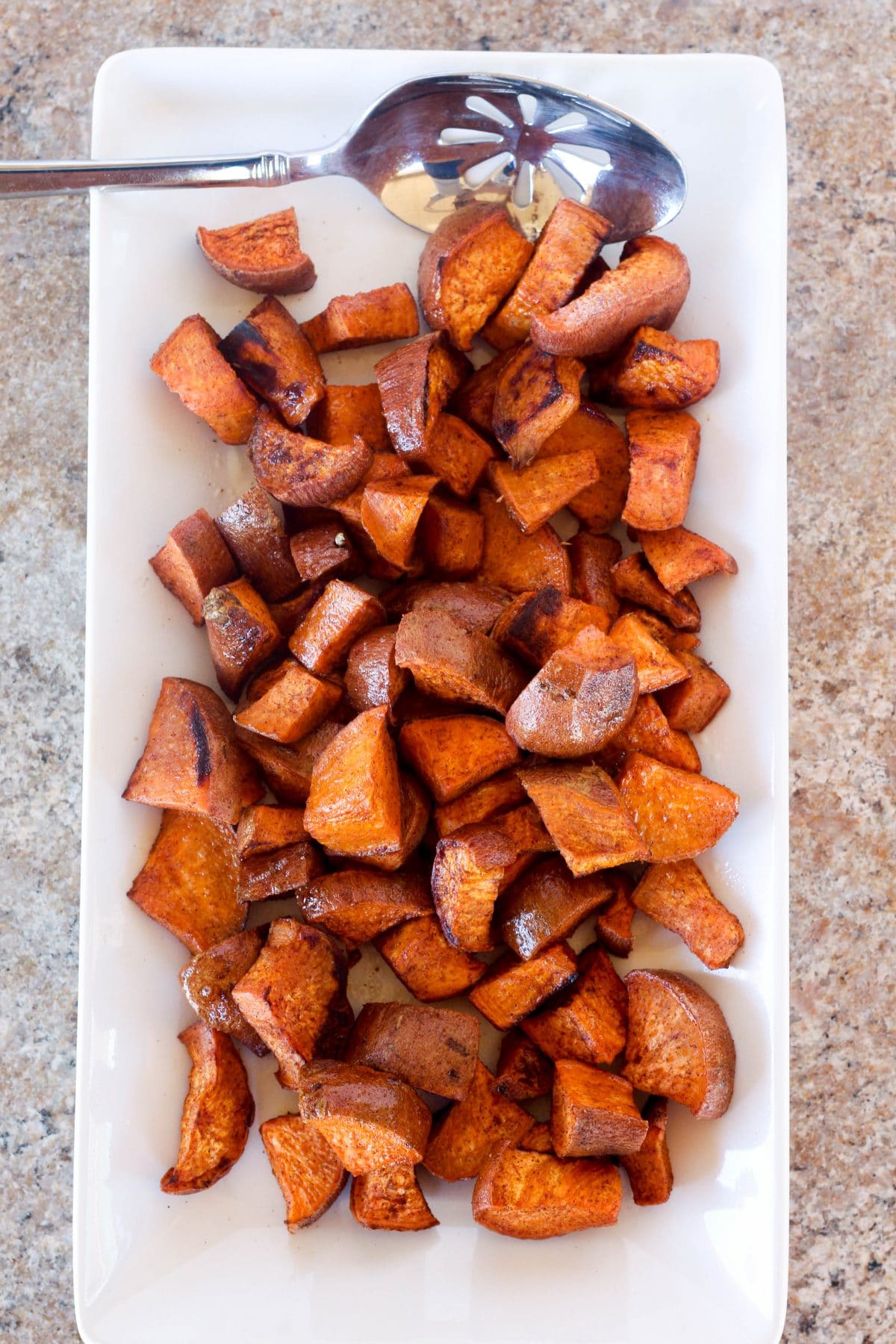 An old workout from my coaching days at TI Fitness! 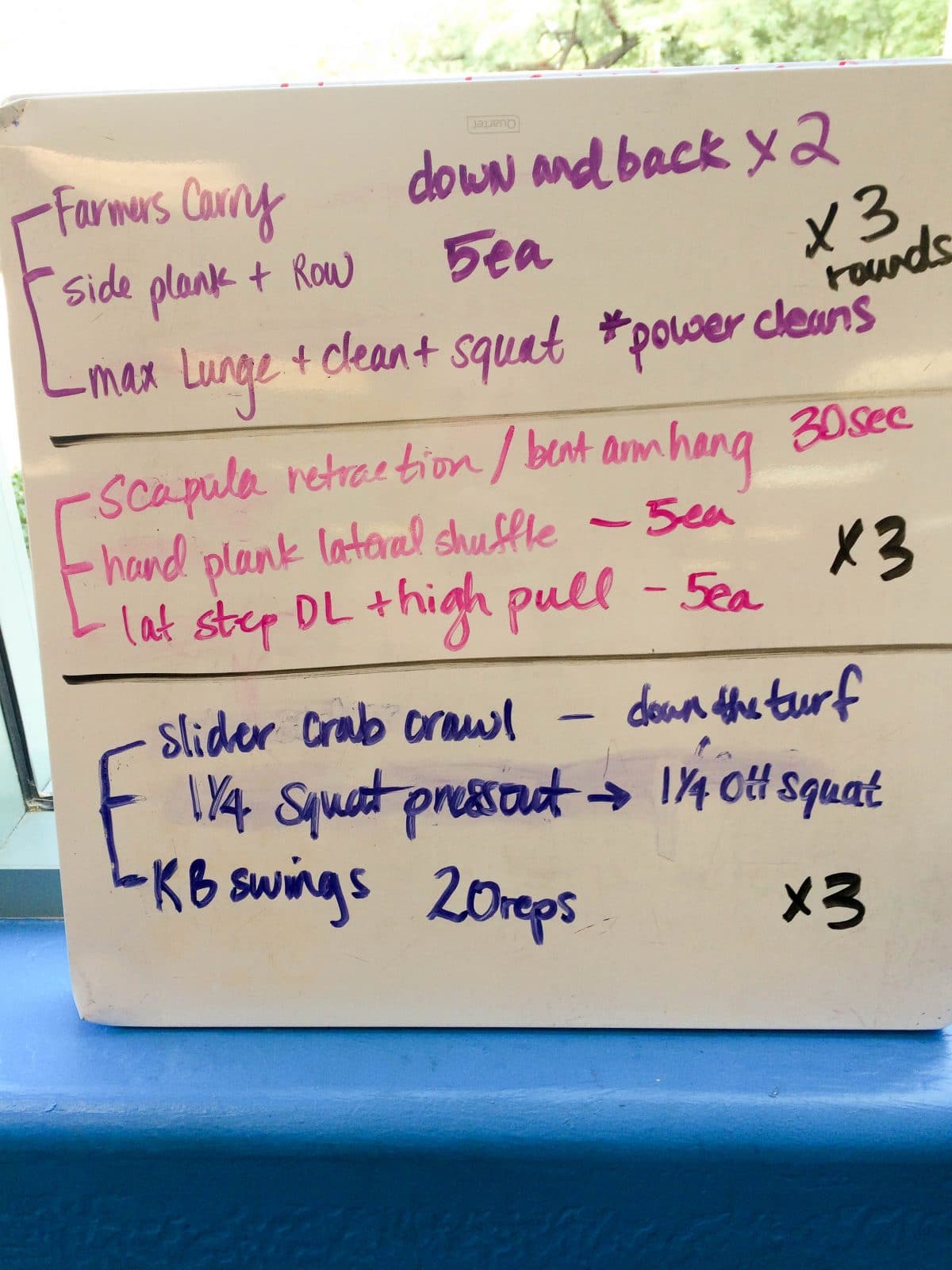