Here we are! One day away from my due date! Although funny side story, when my neighbors ask me, “when my due date is?” I tell them some vague answers like “early” May or “next week” in an effort to not be married to my due date. But it’s hard not to be, right?  Damn, near impossible if I do say so myself as someone 39 weeks and 6 days along! 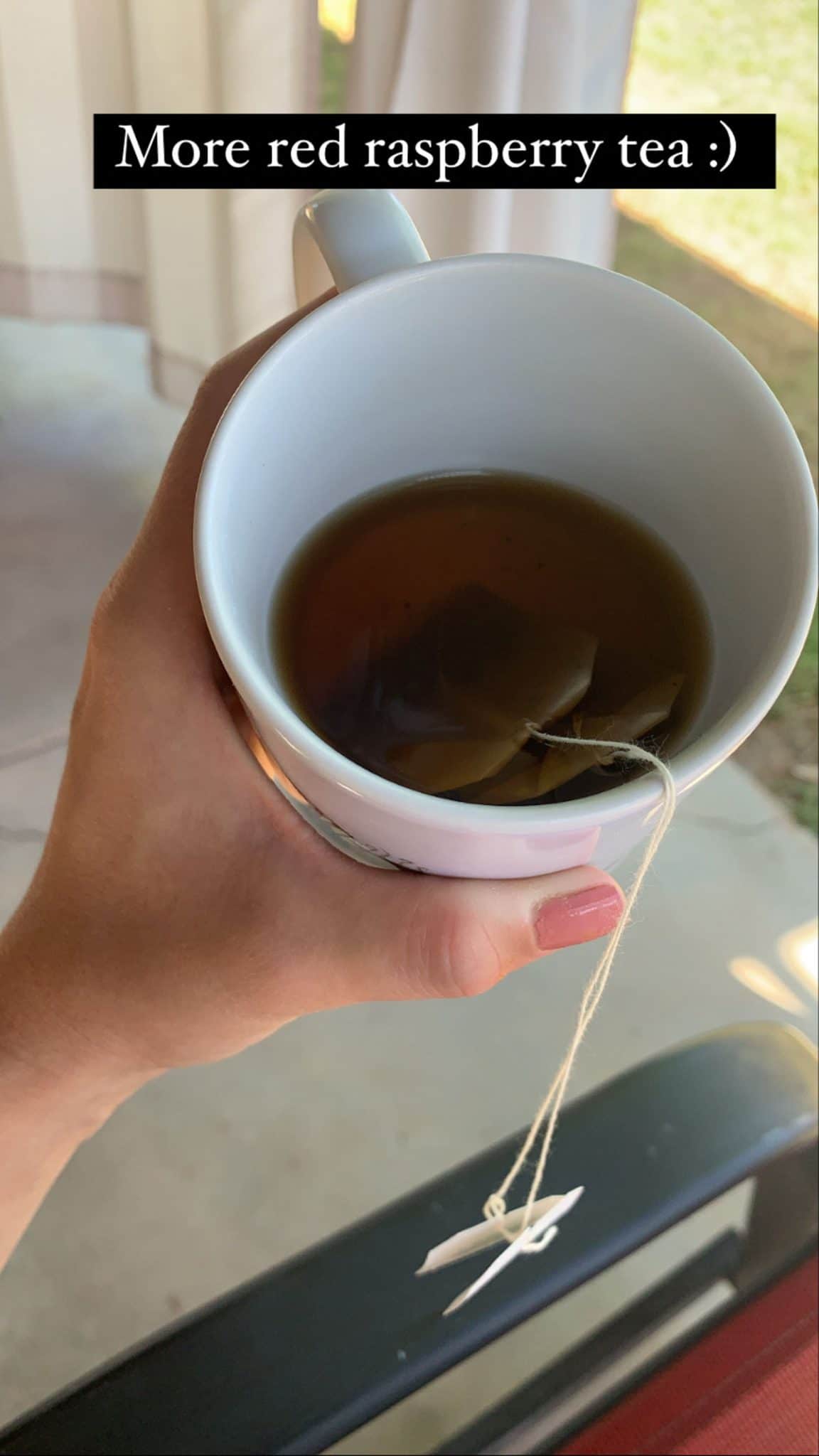 I started drinking Red Raspberry Tea last week, something I never did in my first pregnancy.  Here is to hoping it helps me go into labor on my own!

I do not want another induction, but I also do not feel super comfortable going past 41 weeks.  I know everyone feels different on this. It’s such a personal choice.  My doctor is not one to rush into anything or do unnecessary procedures, so I’ll be taking his advice, whatever that may be.  Hoping maybe stripping my membranes at today’s appointment will help? (At least I’m dilated, albeit 1 cm, with KJ, there was ZERO dilation at 40 weeks pregnant.)  If you could send some prayers or good thoughts up that I go into labor on my own before 41 weeks, I would appreciate it so so so so much!

PS For fun, here is my 40-week pregnancy update from KJ! 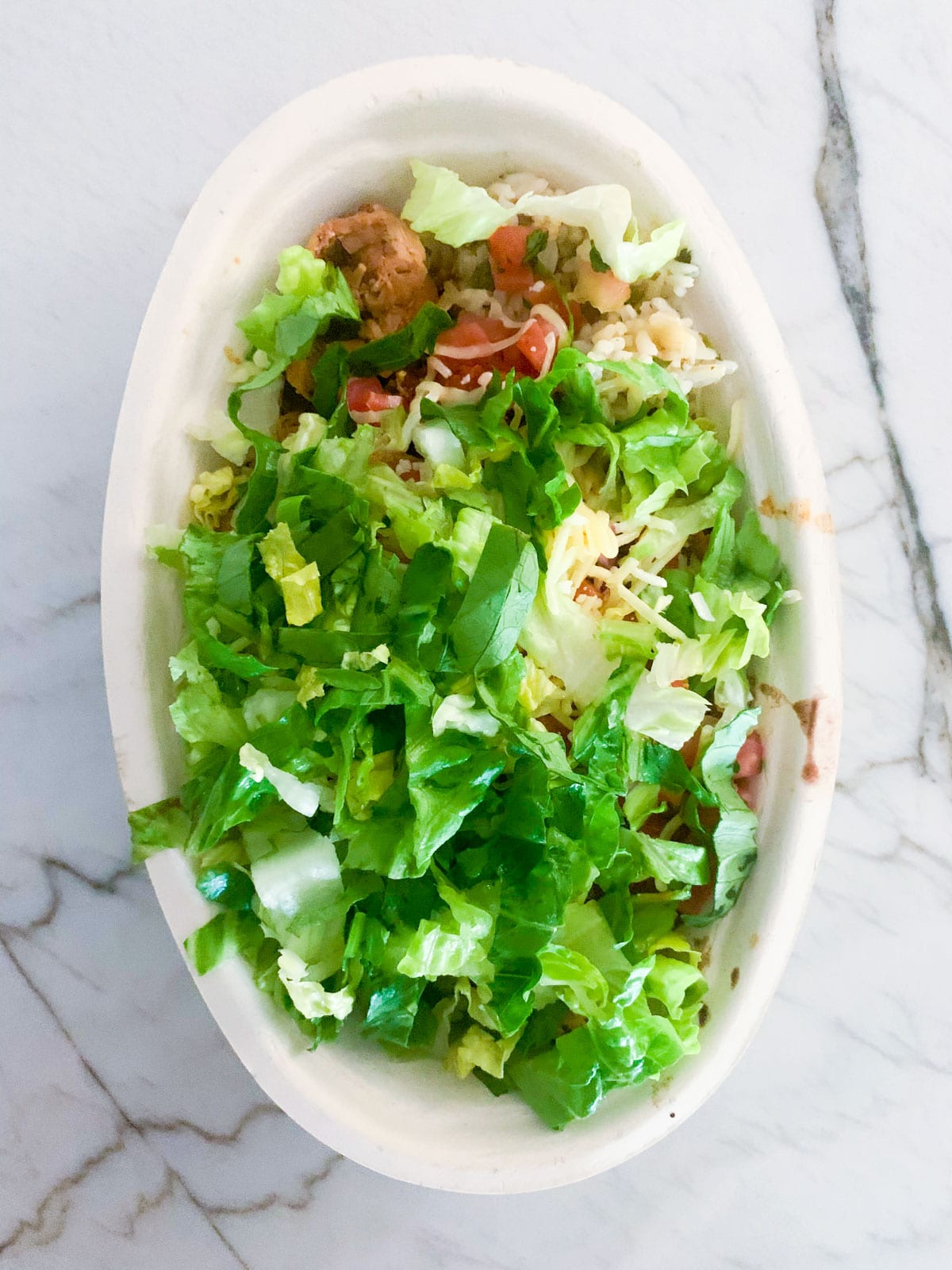 KJ was literally built off of Chipotle and popcorn.  This baby, I’ve hardly had any. My stomach can’t usually handle it.  Crazy how different pregnancies can be! The day before Cinco De Mayo, Mr. Hungry worked from home, so we decided to place an order during nap time.  We figure we would avoid the Cinco De Mayo rush, and I have to say it was just as delicious as I remembered it to be.  Chiptole has been missing from my life for too long (but it did still kind of hurt my stomach, whomp whomp probably cause I don’t have much room these days.) 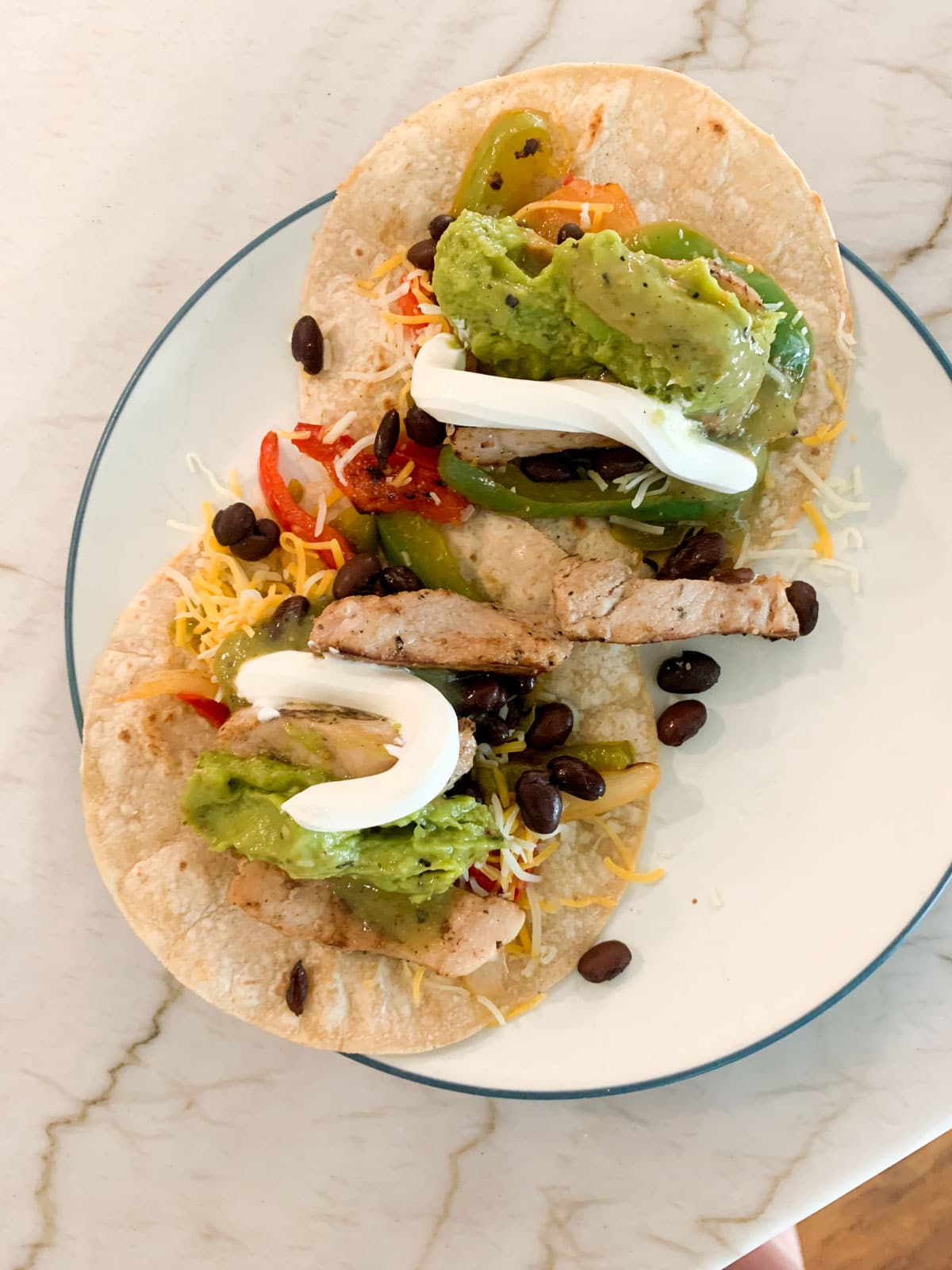 For actual Cinco De Mayo, we made pork tacos from our hungryroot box.  As usual, I added black beans, cheese, and sour cream to our tacos.  I LOVED the guac they sent – it was green chile guacamole by Hope Foods, and I’ll definitely be buying some at the store if I can find it.  Perfectly chunky with so much flavor!  (It’s in the top right of the box shot below.) That’s one thing I’ve loved about the HR boxes. I’ve found they either send the brands that I already love or introduce me to new brands/products I want to buy when I’m not getting an HR box that week. 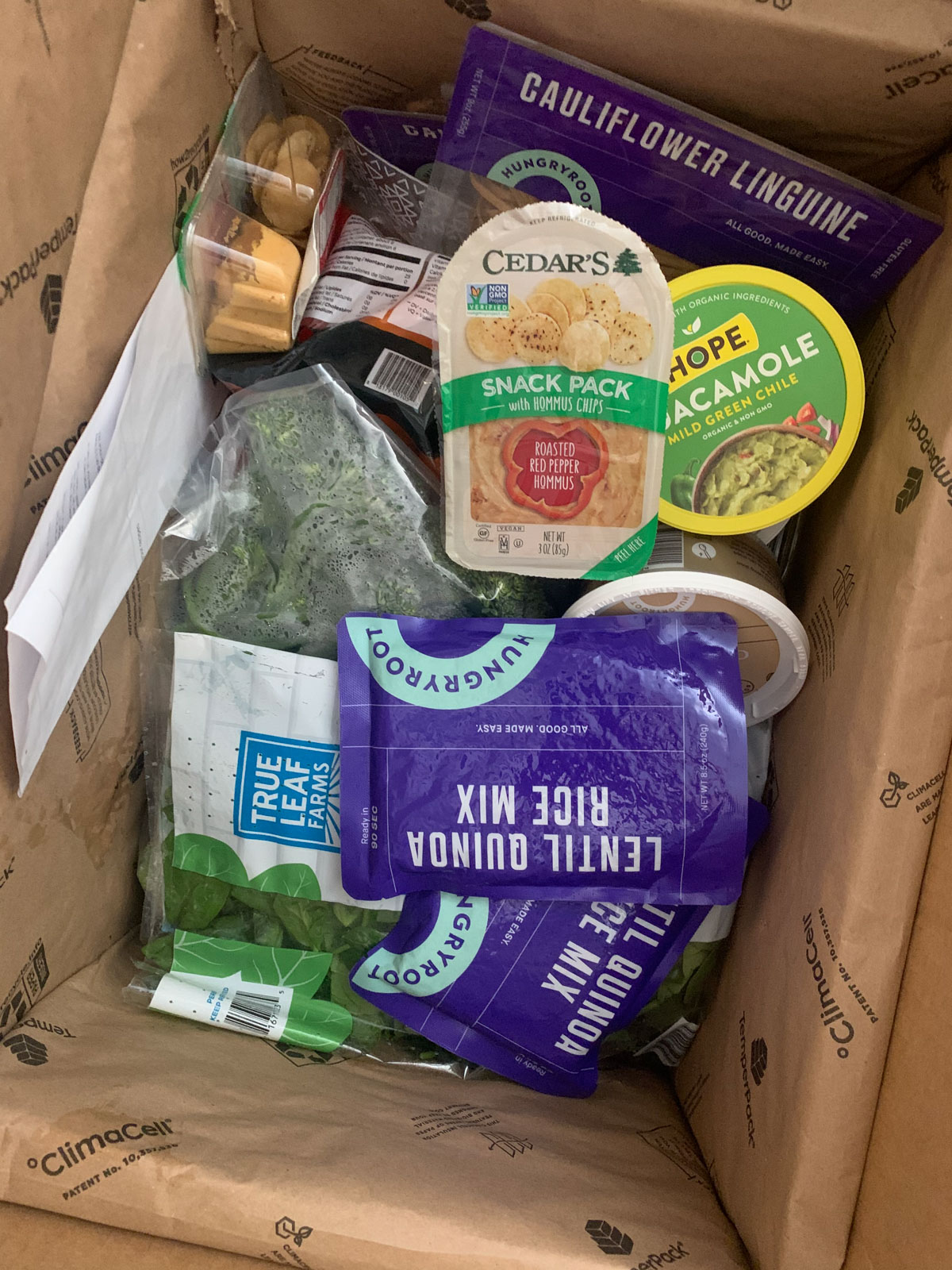 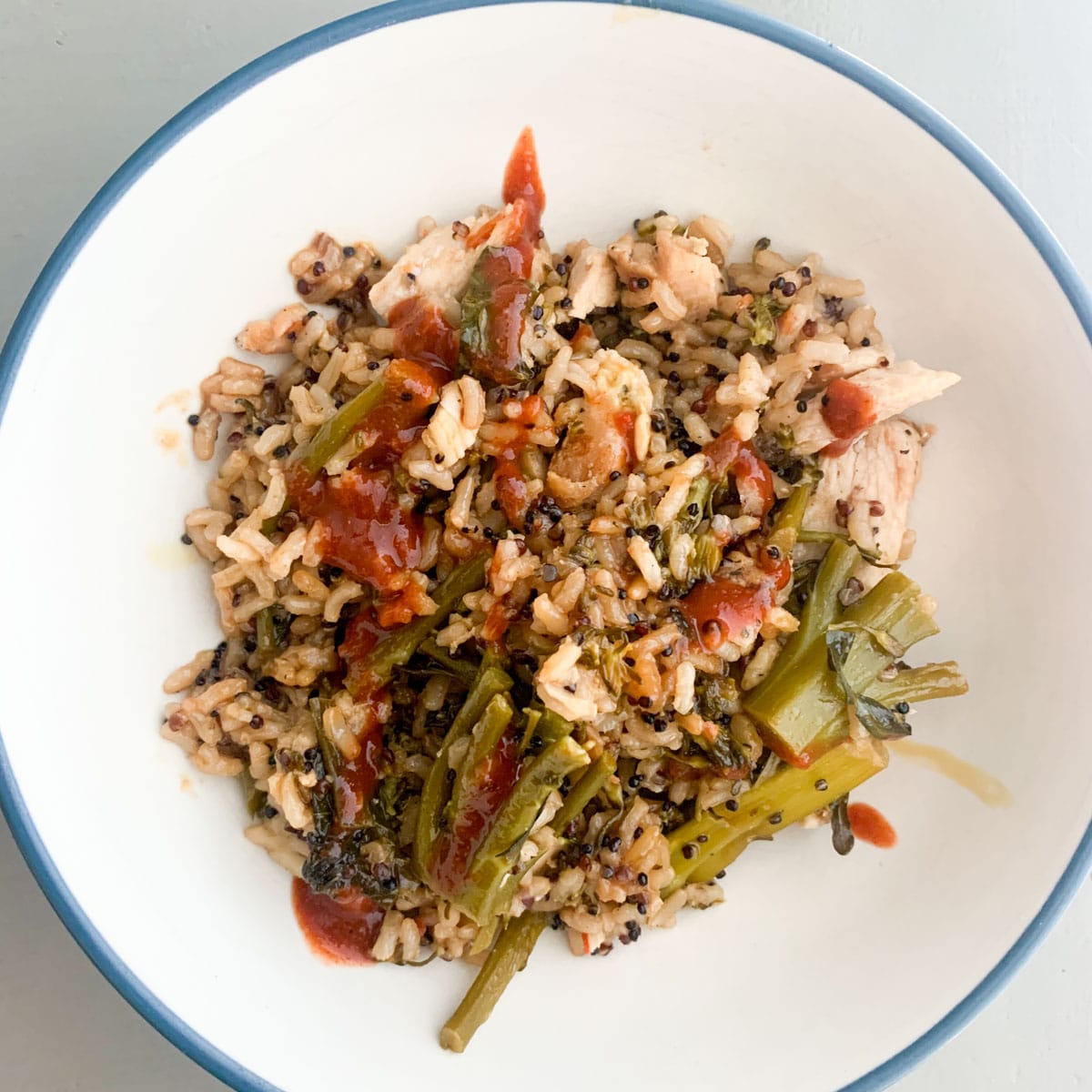 This was from last week’s box, but it was an easy meal to throw together that made dinner for us and two lunches for Mr. Hungry.  Ingredients were: brown rice/quinoa mix + sesame ginger sauce + chicken breast + sweet baby broccoli.  (I added sriracha to mine.) Usually, while I’m making these meals, I separate plain portions of it for KJ before I combine it.  So his dinner was chicken, broccoli, and the brown rice/quinoa all separated.  It turns out he LOVES the HR chicken, which is a huge win because he hasn’t been really eating much protein lately unless it comes from dairy. (He won’t even touch chicken nuggets anymore.)  Which is fine with me, except dairy-based protein isn’t a great source of iron like meat or even plant-based sources can be.  So, I’m glad we found something he will eat! 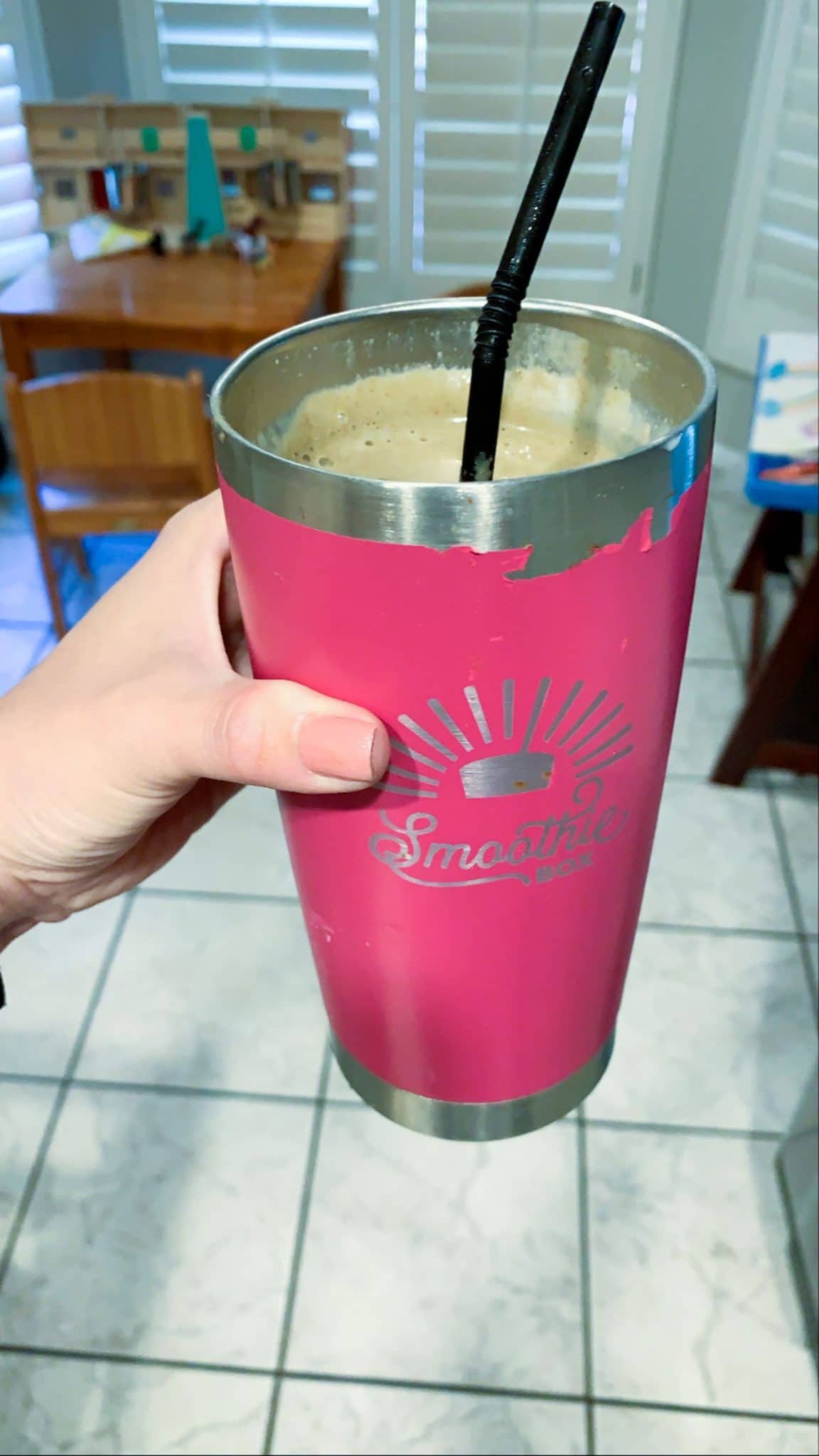 You guys know we drink Smoothiebox smoothies year-round, but now more than ever, as the weather heats up, we fly through them.  Sadly I put my poor swag cup in the dishwasher one too many times, and it’s starting to peel!  KJ has been drinking 3/4 to a whole smoothie himself which is crazy! I used to give him half and freeze the other half for another day. Now he often drinks the whole thing! He is obsessed with the chocolate smoothie + dates + vanilla Greek yogurt.

Read my full review on Smoothiebox here  (and get a discount code.)

Lots of walking still! The last couple of days have been pretty uncomfortable, though. At the beginning of the week, the Braxton Hicks picked up pretty significantly during our morning walks, but by the end of the week, the BH turned into painful pelvic pressure and back pain.  It’s fine, I can still talk through it, but I’m happy to skip walking for my doctor’s appointment this morning. 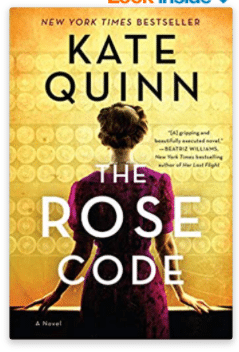 Finished the Rose Code this week.  It took a while to drag me in. I wasn’t hooked from the start, but when I was desperate for distraction from thinking about when I’ll start labor every second of every day I picked it up again.  Around halfway through, things really started to pick up, and I got sucked in reading a few hours every night.  The book follows three women in England during World War II who are sent to a top-secret military estate to break German codes.  They start as unlikely friends, torn apart, and then brought back to each other post-war to save each other at the last hour.

Back In the Day Treadmill Workout 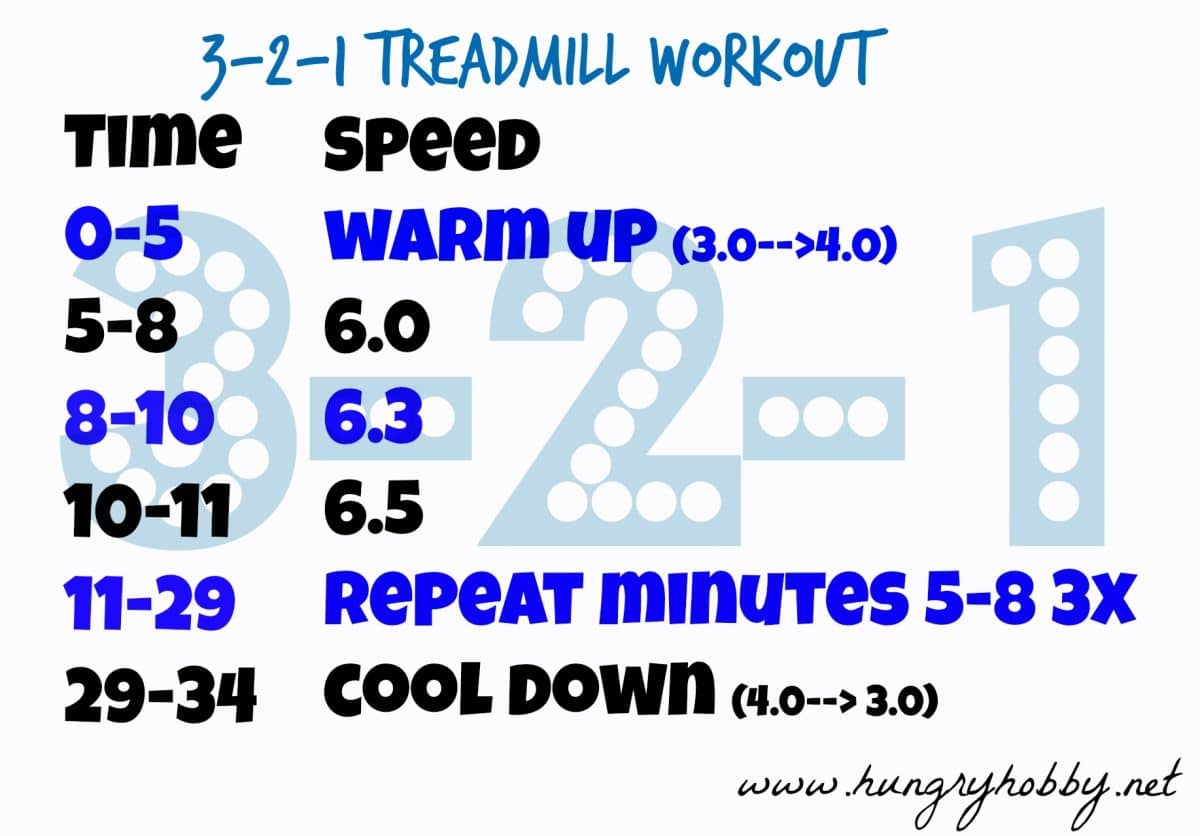 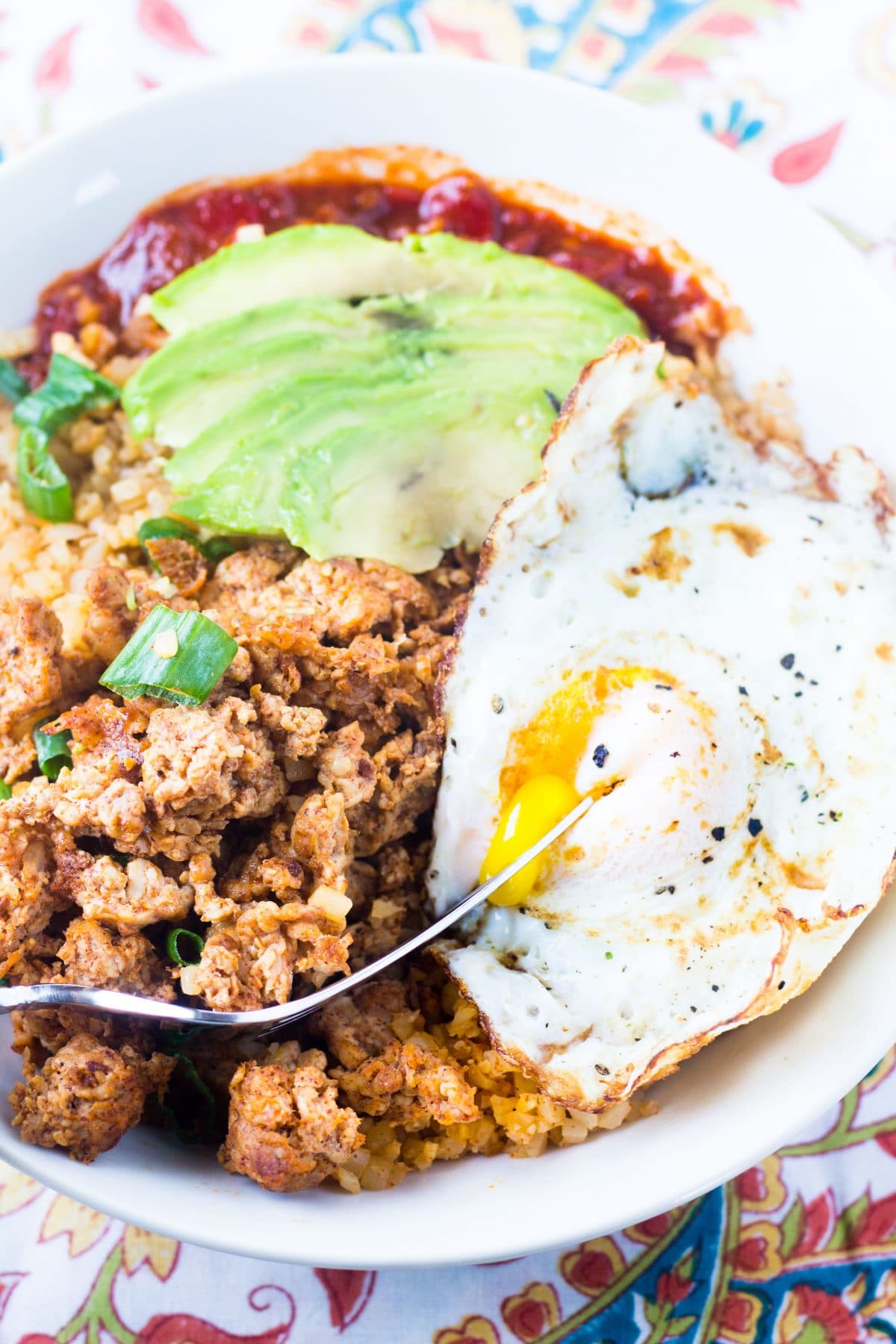