Hi everyone!  Glad you guys like my second version of Pumpkin Protein Green Smoothie this morning!  Let me know if you try it!  This mornings breakfast was a new favorite weird concoction I came up with yesterday and  I am creatively calling almond butter yogurt. 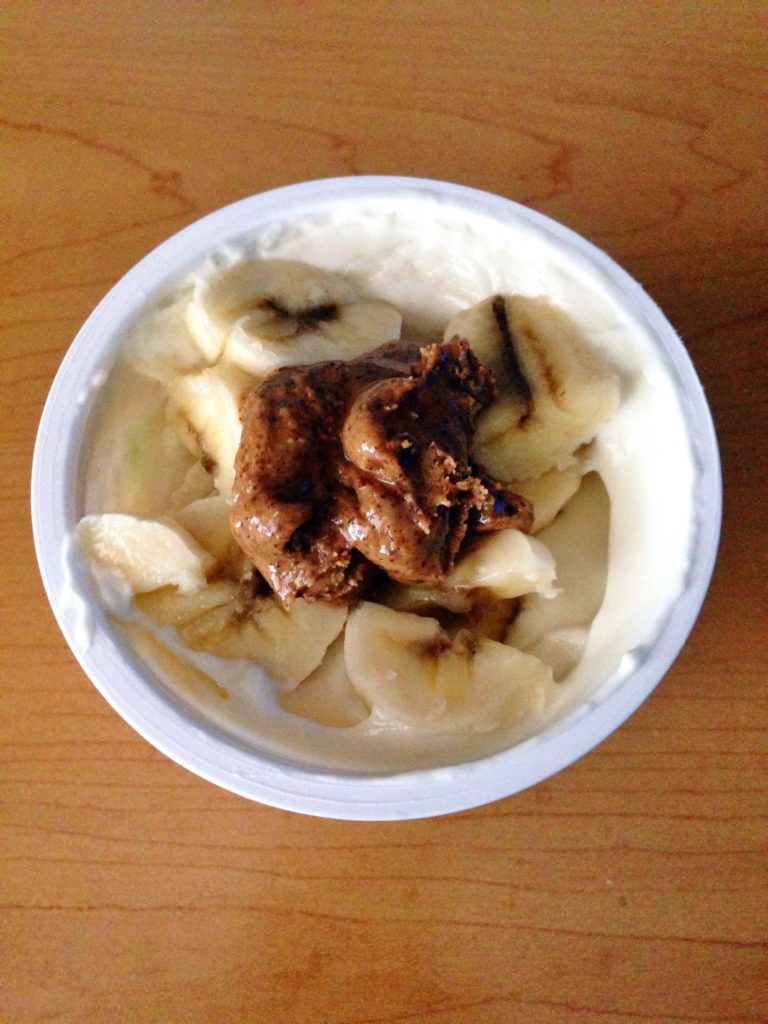 So last night I went to see a new Physical Therapist to deal with my SI joint/pirformis pain. He confirmed what I’ve been told before, I have pelvic instability causing a torque inwards on the right side of pelvis.  This leads to a myraid of problems including pain in the pirformis (leading to piriformis syndrome), glutes, and hip. His tactics were much more traditional than the previous round of PT I went through.  In the previous round (May-June) I was pretty much allowed to do whatever I wanted including run, strength train, circuits, whatever  and then he would kind of fix the issues as they arose.  This PT is much more traditional, the first thing he said is that he gets everything from the waist down.  I thought it was funny, but he didn’t, he was dead serious.  No activity is to be performed unless he okays it.  What did he okay? Pretty much nothing… NOT EVEN WALKING.  Okay he agreed to spin and upper body lifting/pylo (pull ups, push ups, and dips—> my favorite whopee – strong emphasis on sarcasm).

I had a snack mid morning of the rest of my banana and scrapped the rest of the almond butter jar completely bare! 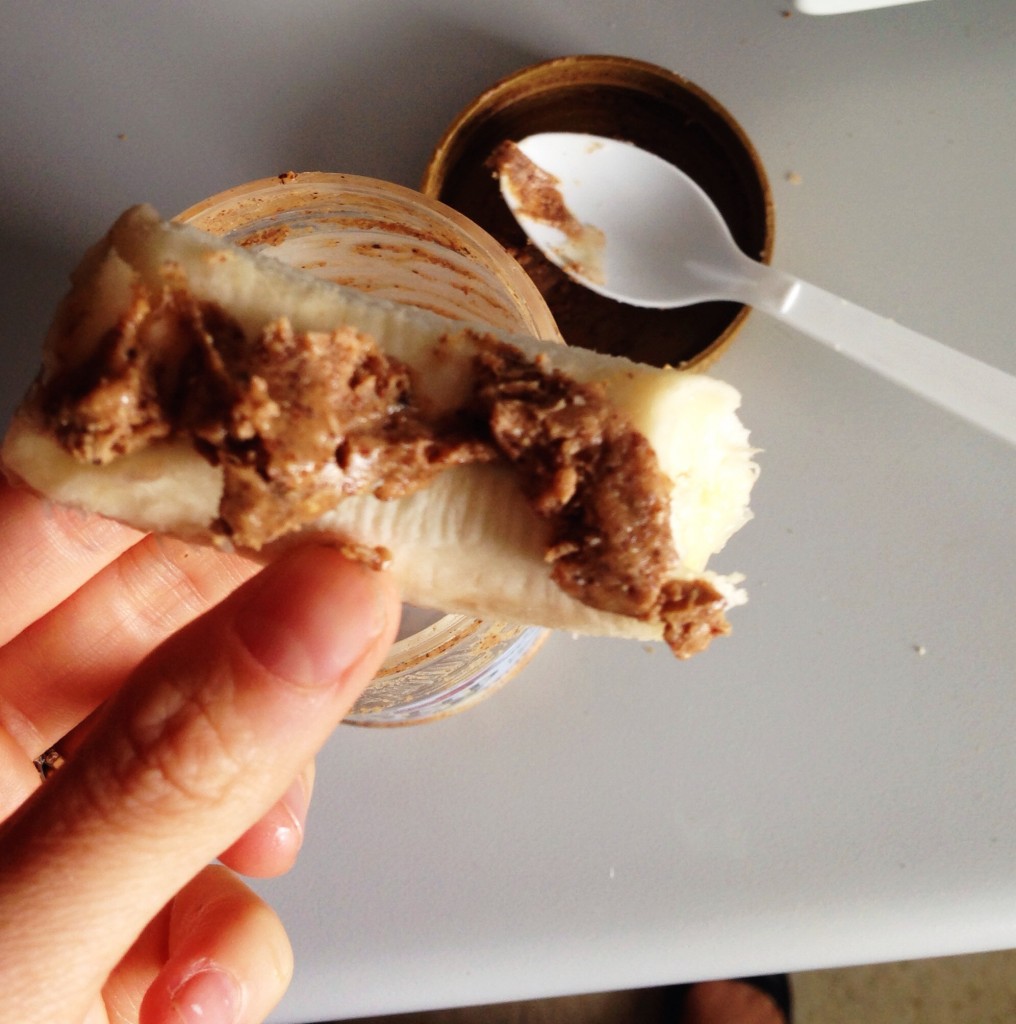 If you’ve been following my blog for a while you probably know that I’ve been dealing with this issue since January.  I can’t believe it’s been almost a whole year already, that’s insane.  Actually I thought it was insane when 2 months went by, now it’s just unbelievable.  I’ve tried Chiropractic care, ice baths, walking and not walking, running and not running, swimming, rest and more recently BodyPump.    Every time I change activities it gets a little better but then flares up, so now I’m on round 2 of physical therapy.

Lunch was a plain salad with chicken still leftover from Tuesday’s goodbye dinner and carrots. 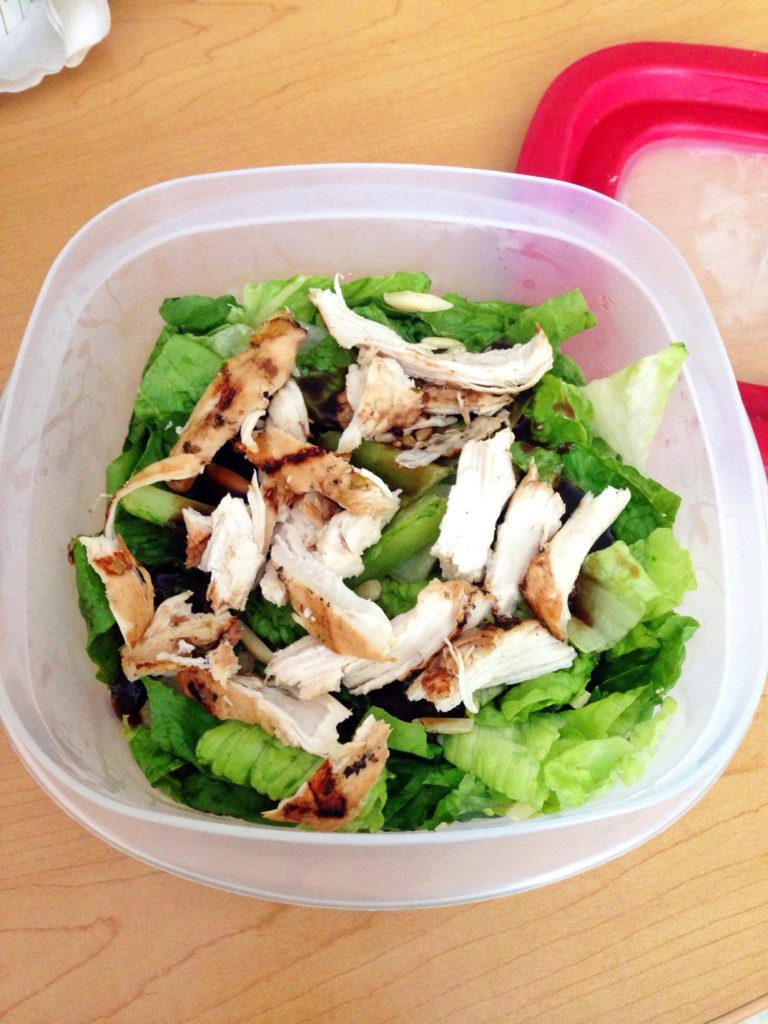 After being told to halt most activity I started to cry, I couldn’t help it I was so frustrated.  I blurted “I’m a runner, I’m an athlete and I don’t feel like me.”   That’s when the PT said something very important, “We are not defined by what we do.  You can maintain your physical fitness level, you just need to be creative.  I play beach volleyball and when I dislocated by shoulder I did not lose my identity.”  I told him my goal of running the Arizona Rock n Roll Half Marathon mid-January and he said “that’s not out of the question, IF I follow the treatment plan.”

Have you ever been to Physical Therapy?

What are your favorite not normal breakfast concoctions?

I still think the fact that eggs taste good sweet with SunButter is weird (see high protein pumpkin pancake), but so good!