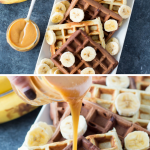 Coconut Flour Waffles, both plain and chocolate versions, drizzled with a peanut butter syrup that is literally to die for! Both versions of gluten and dairy free! 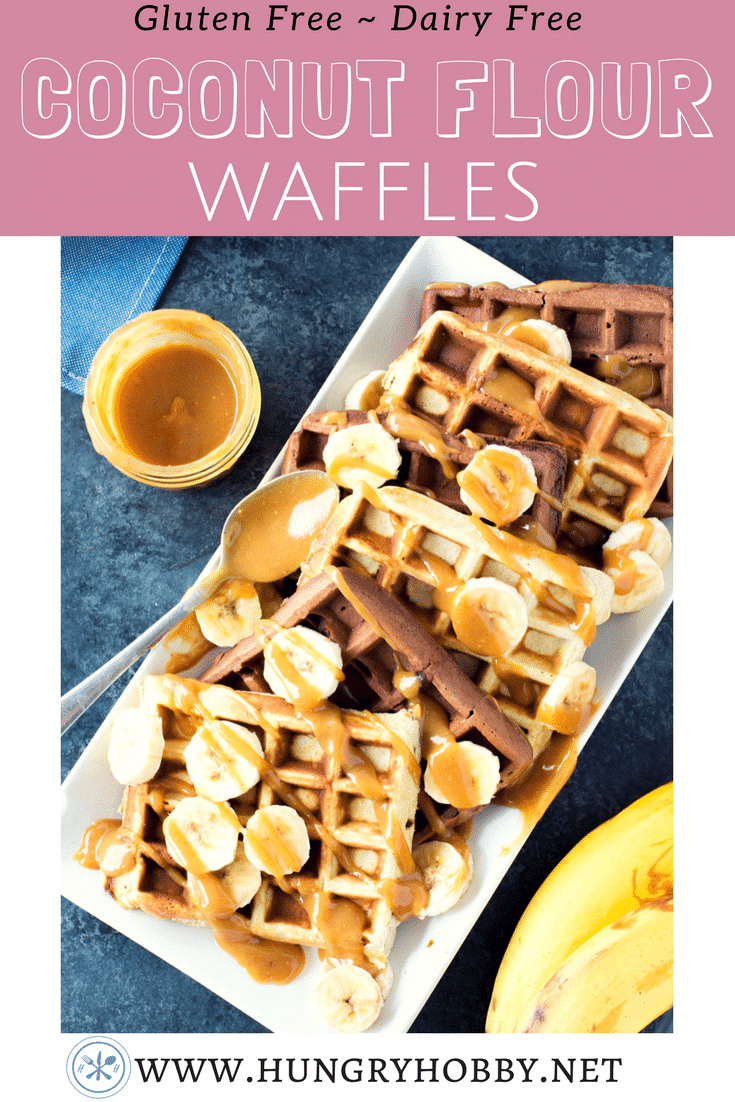 Happy Monday friends!  How was your weekend?  Was it restful? Full of fun or both?  Mine was pretty good; I’m planning to share a little bit about my adventures tomorrow along with a chance to win one of my newest food obsessions.

As far as preparing for this week goes though, I didn’t do as much meal prep yesterday because I’m planning on doing it tonight.  Cook once, eat many times that is my philosophy! 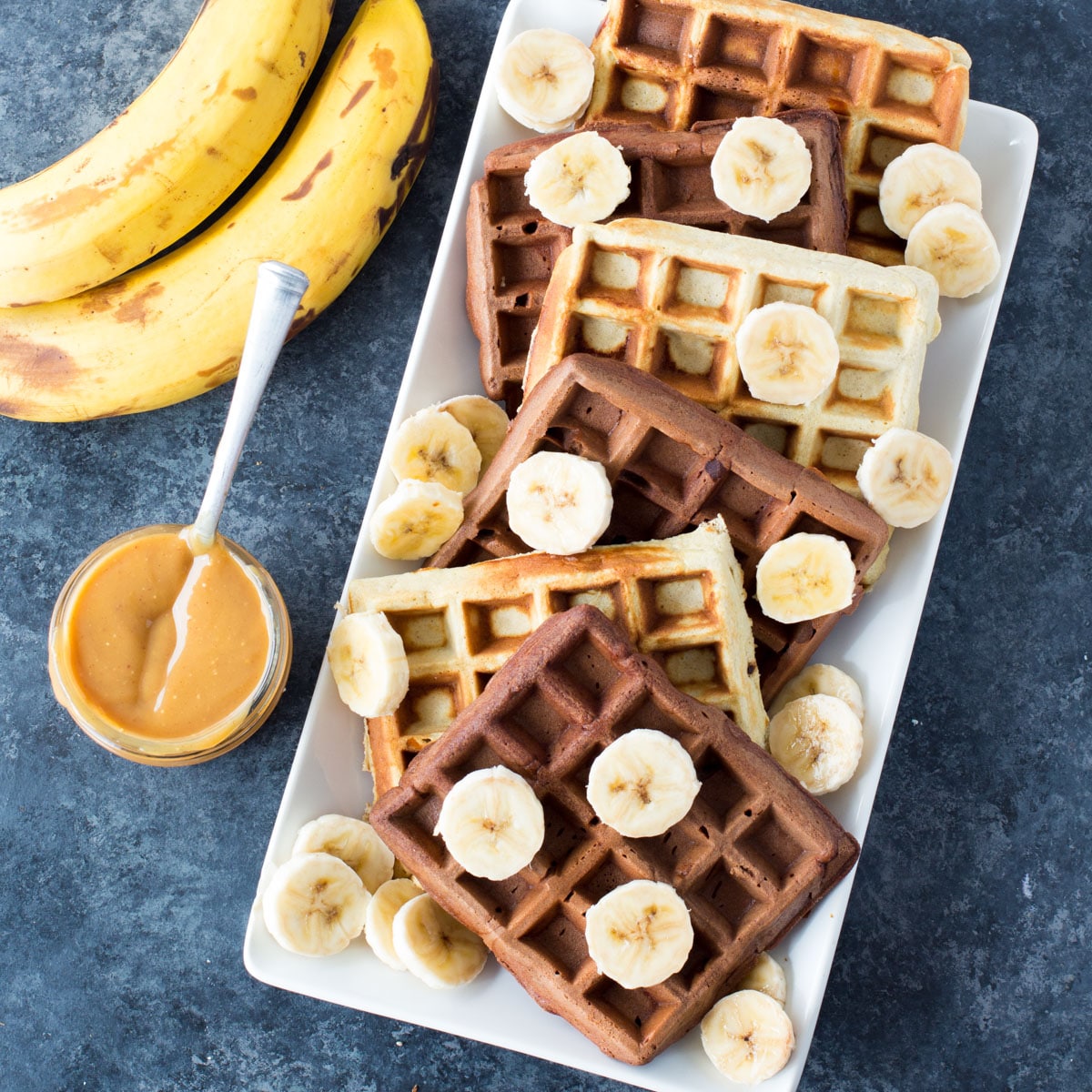 This months Recipe Redux theme was to show off our newest favorite cooking appliance and mine is definitely my waffle maker!

(I freaking love mine,here is the affiliate Link for Waffle Maker) This recipe is based on my most popular recipe on the blog, but my love for waffles far exceeds my love for pancakes.

Waffles are crispier and therefore win my heart any day.  So I took that recipe and made a batch of waffles, but then I wanted chocolate waffles.  Because, why not have chocolate in your life?

So now you are getting two versions of waffles, original and chocolate.  Personally, I always top my pancakes and waffles with nut butter or real butter, hardly any syrup.

I don’t know why, I like anything with sugar, but I think it’s because of my thing against soggy breaded food. Anyways, I made the BEST peanut butter syrup EVER! Seriously, ever to slather these babies with! 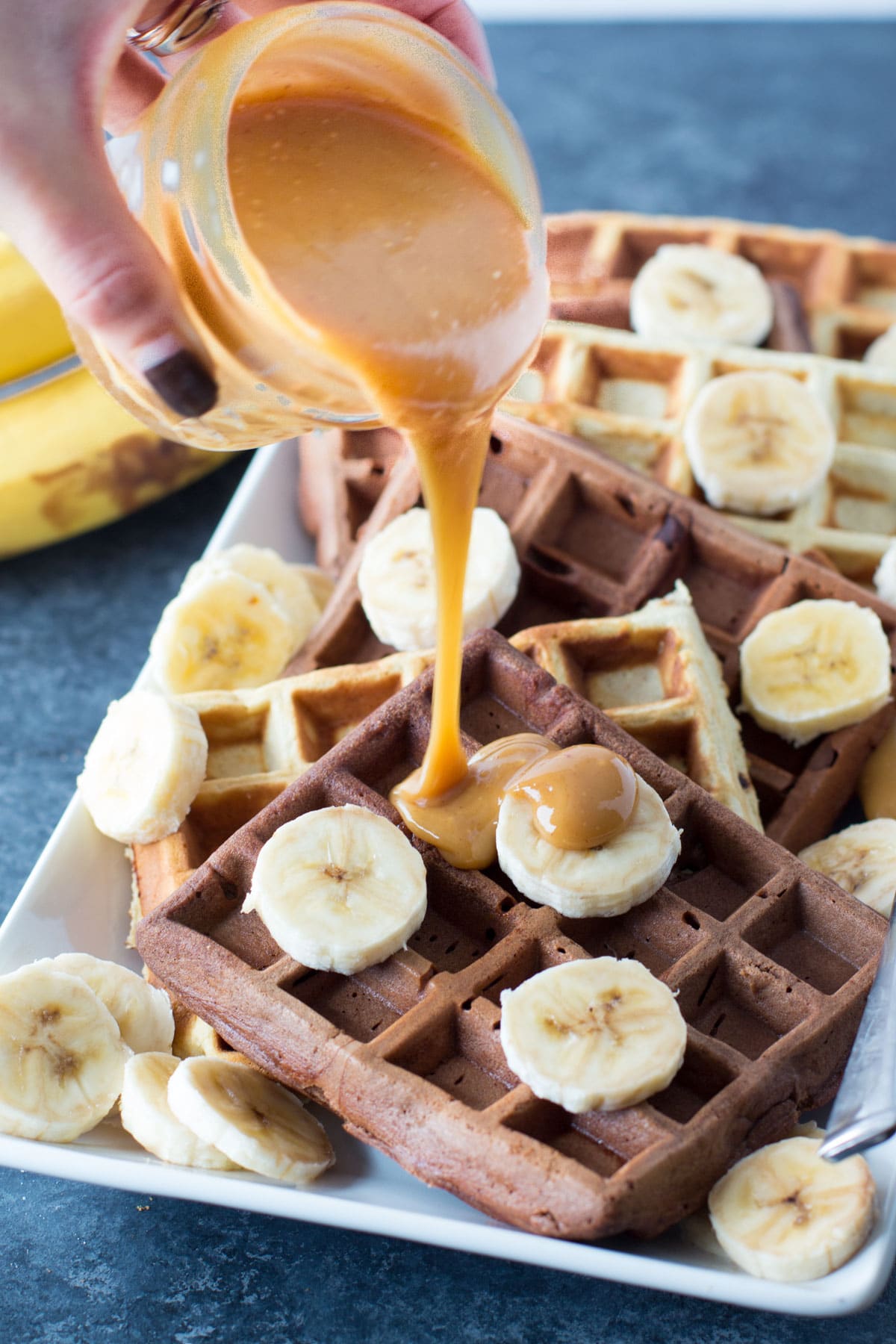 I made a ton of these waffles, so I ended up freezing them individually in ziplock bags.  This morning I took one out of the freezer and popped it into the toaster oven, which was as good as right off the waffle iron if not better.

The toaster oven made them even crispier than the waffle iron did, which I loved because the crispier, the better in my book.  I want waffle toast, which is what I got when is stuck them in the toaster oven.  So these are super great for meal prep.

The chocolate version is a bit higher in carbs and sweeter than the original, so, I might be eating those ones for dessert, but that peanut butter drizzle is to die for, seriously do NOT skip that.  Unless you don’t eat peanut butter, then just sub some other type of nut butter. 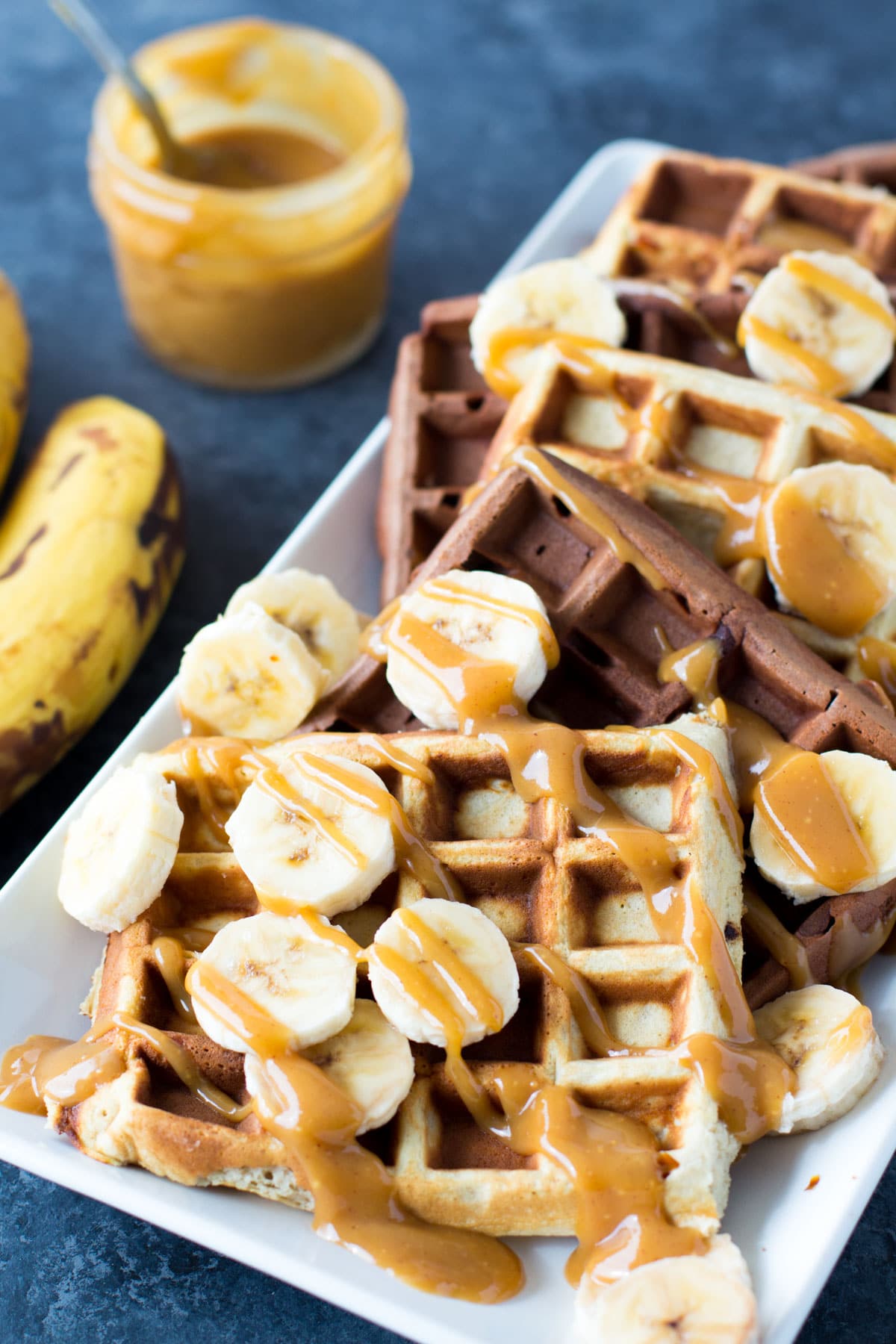 Let’s talk about the ingredients:

Coconut Flour – You can’t sub any other type of flour for it, it’s a really unique type of flour.  It’s very absorbent, high in fiber, plus protein and needs a lot of liquid.  Oat flour is about the only thing that I would think might work, but I haven’t tried it!

Eggs & Egg Whites –  You could sub one egg for 1/4 cup egg white.  You may be able to sub 1/4 cup egg whites for one egg, but I haven’t tried it.  Typically waffles are a bit tastier with a little extra fat, so it might be best to keep the whole egg.  When I put egg whites in a recipe, I always used the liquid carton kind.  I’m not into wasting egg yolks by separating them myself.

Banana- I love chocolate and banana together.  Plus I really don’t feel like these waffles are overwhelmed by banana at all.  I used a decently ripe one so that the waffles would be a bit sweeter. You could sub canned pumpkin or mashed sweet potato if you aren’t a banana fan.  Probably about 1/3 cup would do it.

Maple Syrup –  maple syrup lends a classic pancake taste, so that’s why I chose it for the chocolate pancakes.  You could sub any other liquid sweetener like agave, brown rice syrup, or honey.

Coconut Oil/Butter – Coconut oil, butter, and ghee are mostly interchangeable in almost any recipe.   Feel free to sub as needed.  You could use another type of oil in the pancakes, but I’d stick to one of those in your syrup, or it might taste off.

Peanut Butter – You can sub any nut or seed butter for the peanut butter. 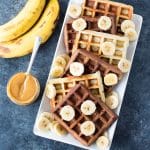 Coconut Flour Waffles both plain and chocolate versions, drizzled with a peanut butter syrup that is literally to die for! Both versions gluten and dairy free!
Calories: 176kcal
Author: Kelli Shallal MPH RD

Serving: 1waffle (1/4 chocolate batter) | Calories: 176kcal | Carbohydrates: 27g | Protein: 8g | Fat: 4g
Tried this recipe?I'd love to see what you made! Tag me @hungryhobbyRD or tag #hungryhobby if you try this recipe! 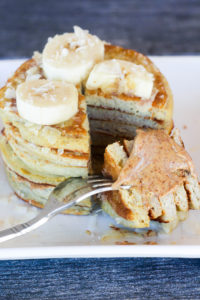 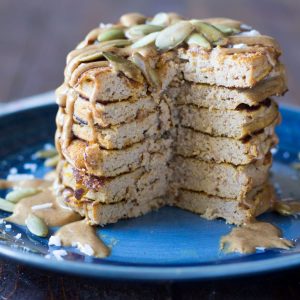