Hi, Friends!  Sorry, I’ve been behind on posting, I wish I could say it will get better but it probably won’t until after the new year.  I know this year has a lot of work in store for me (which means a lot of fun stuff for you guys), but first I’m trying to soak up all the time I can with the family.  I know it will be months until we see them again, so I can’t help but stay up late with them, have a slow breakfast with them in the morning, and go visit friends.  I hope you guys are getting the chance to do the same!  Before I get to the quick Christmas Recap a few housekeeping items:

Yesterday post includes a new freebie!  A healthy habits calendar for Newsletter subscribers.  If you are already a Newsletter subscriber, you will be getting your freebie PLUS more on the first!  If you want your copy sooner than that, feel free to email me and I’ll send it over right away!

Congrats to Kelsey for winning the survey giveaway, I’ll be emailing you your Amazon gift card right away!

Christmas Eve started off with a run with my run group, I did four miles with my friend which flew by as we chatted the whole time!  Afterward, there was coffee and treats, but I had to run so I could go teach a workout at TI Fitness! 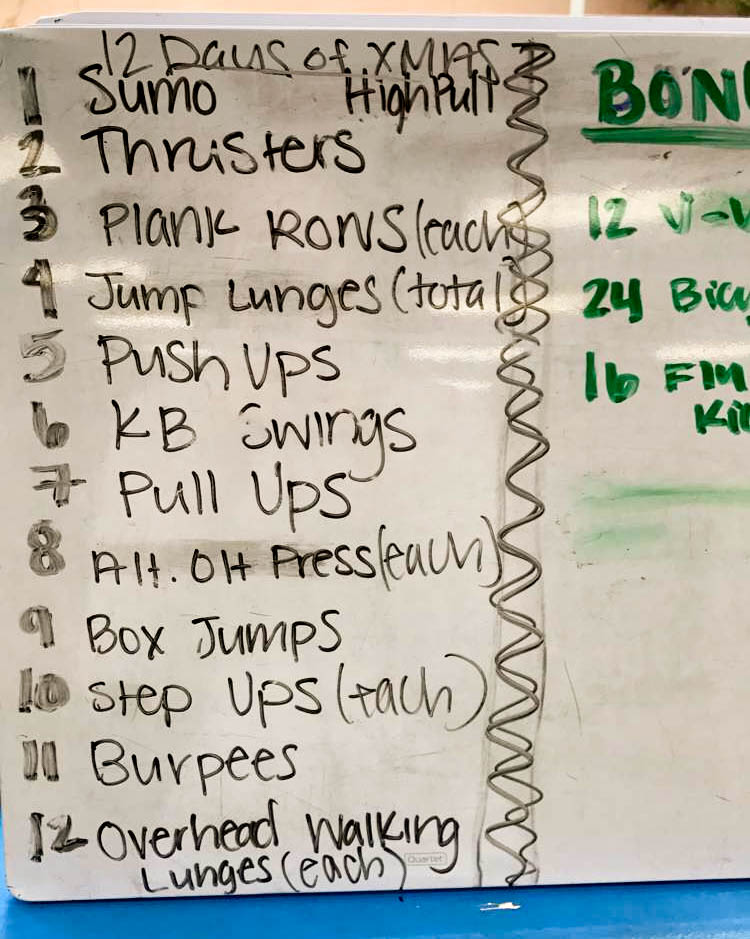 It was a TOUGH workout, they did great though, everyone finished in 45 minutes.  Afterward, I came home and we went to Costco to pick up ALLTHEAPPETIZERS!  My MIL and I might have gone a little cray cray but I think we did well in our choices.

We ended up going to mass early, the four o’clock mass, which was the children’s mass.  The kiddos were so cute.  I bet something happened at our mass that didn’t happen at yours.  The curtain caught on fire!  Everything was fine though and it was put out quickly, but it was a little unusual for people to start yelling FIRE FIRE FIRE in the middle of mass, right before the consecration.  Anyways, luckily everything was fine, no evacuation needed. 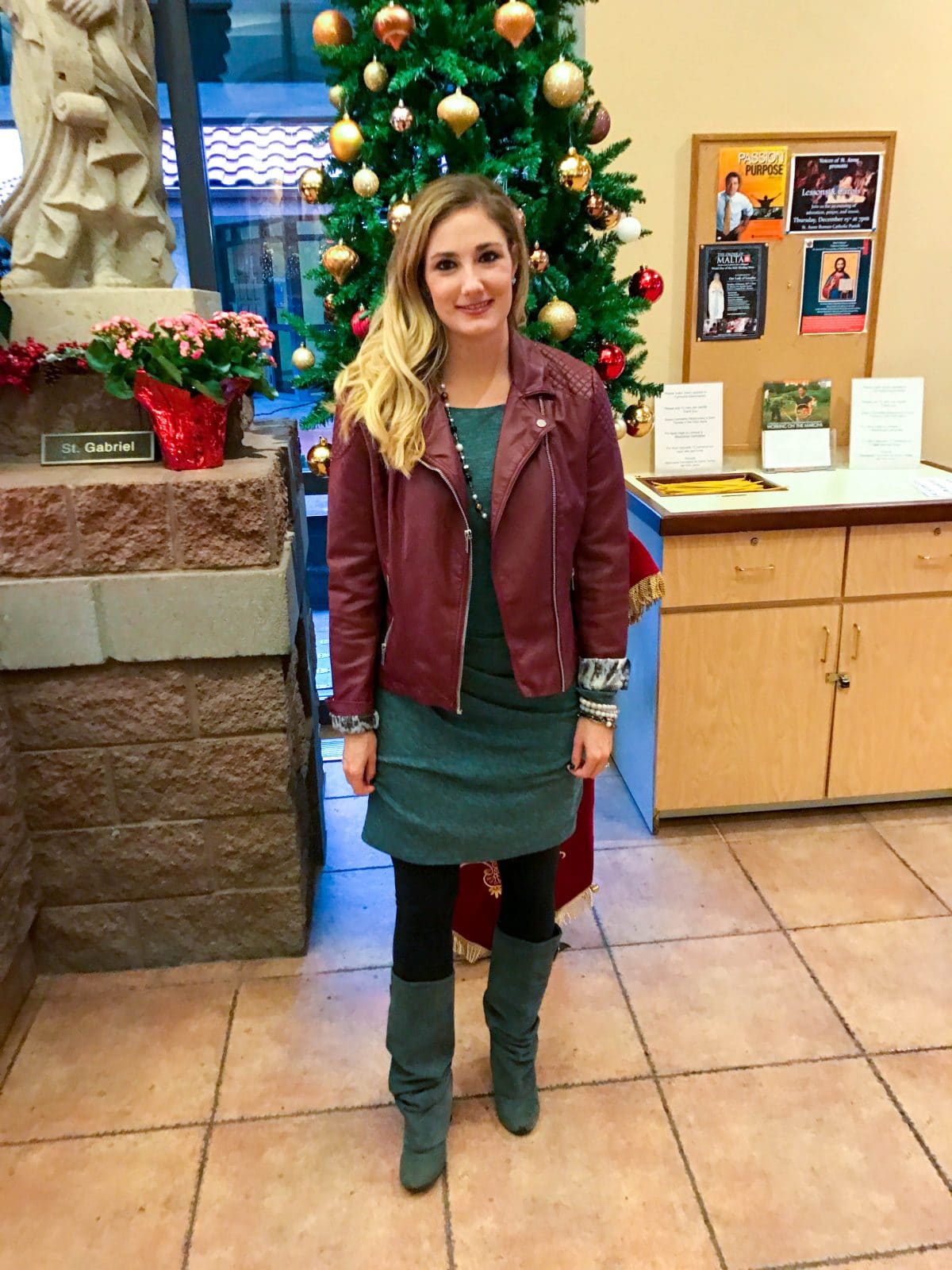 I rocked my favorite sweater dress and my Emma Swan red leather jacket.  I wish I would have skipped the tights, it was a bit warm in there.  Did I mention it rained on Christmas? I think that might be a first I can remember as long as I’ve lived in Arizona.

When we got home it was appetizer central! We got spinach artichoke dip, uncured natural beef mini hot dogs with barbecue sauce, bacon wrapped scallops, and tamales! Plus I drank wine and had caramel mini cheese cakes while we played bezzerwizzer.  It was amazing! 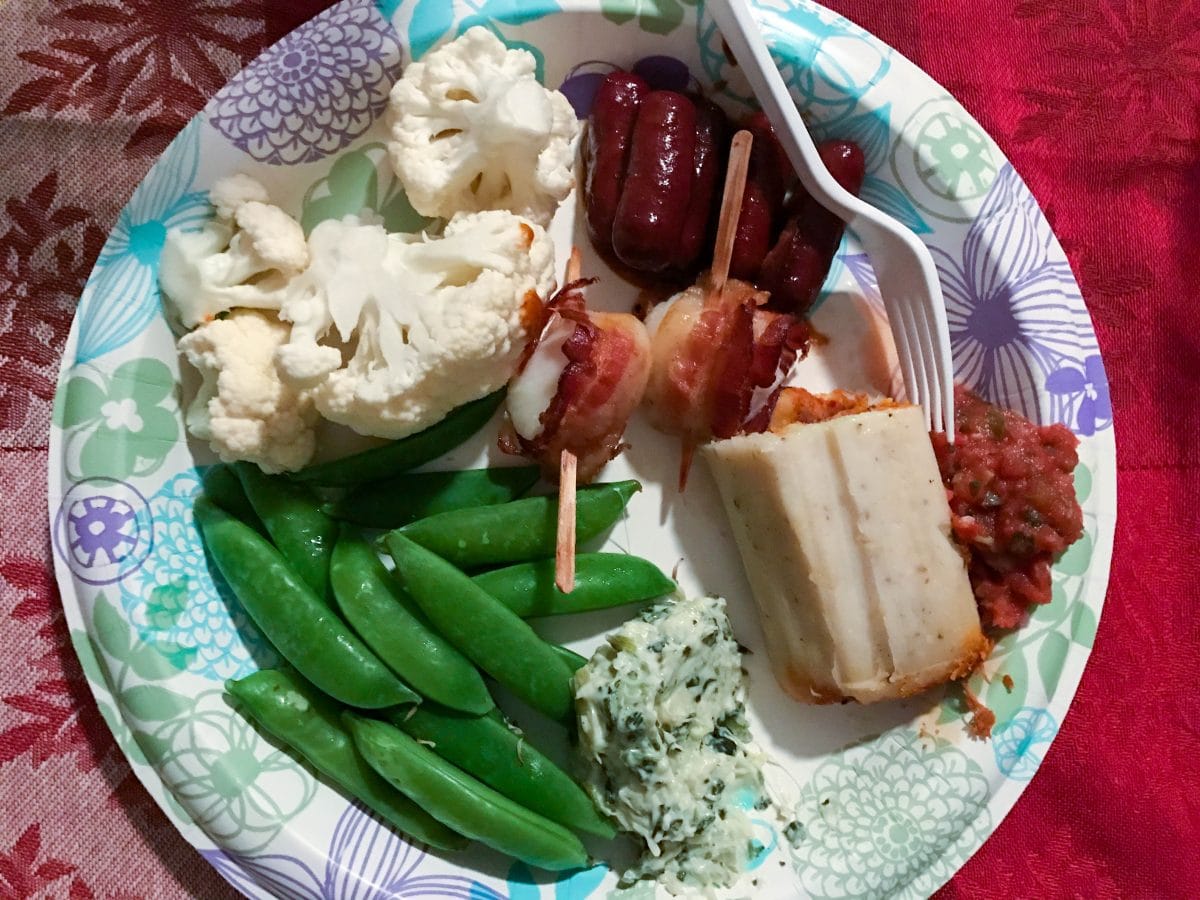 Christmas morning was just how I like it, slow and wonderful.  We got up and had breakfast, tooled around in our PJs, and just hung out.  Then I got to cooking with the help of my assistants Mr. Hungry and my FIL.  We made glazed ham, Garlic Dill Salmon with Lemon Herb Butter, Bacon Green Beans, Cauliflower Mash (with a layer of bacon cheddar from Trader Joe’s), Maple Glazed Sweet potatoes and Brussels Sprouts (I just left the chicken sausage out) and garlic bread.

I actually kind of thought it was hysterical because when all the food was ready and I took a snapchat of it, I realized hey I made THREE kinds of vegetables.  HA HA HAHA Yep! 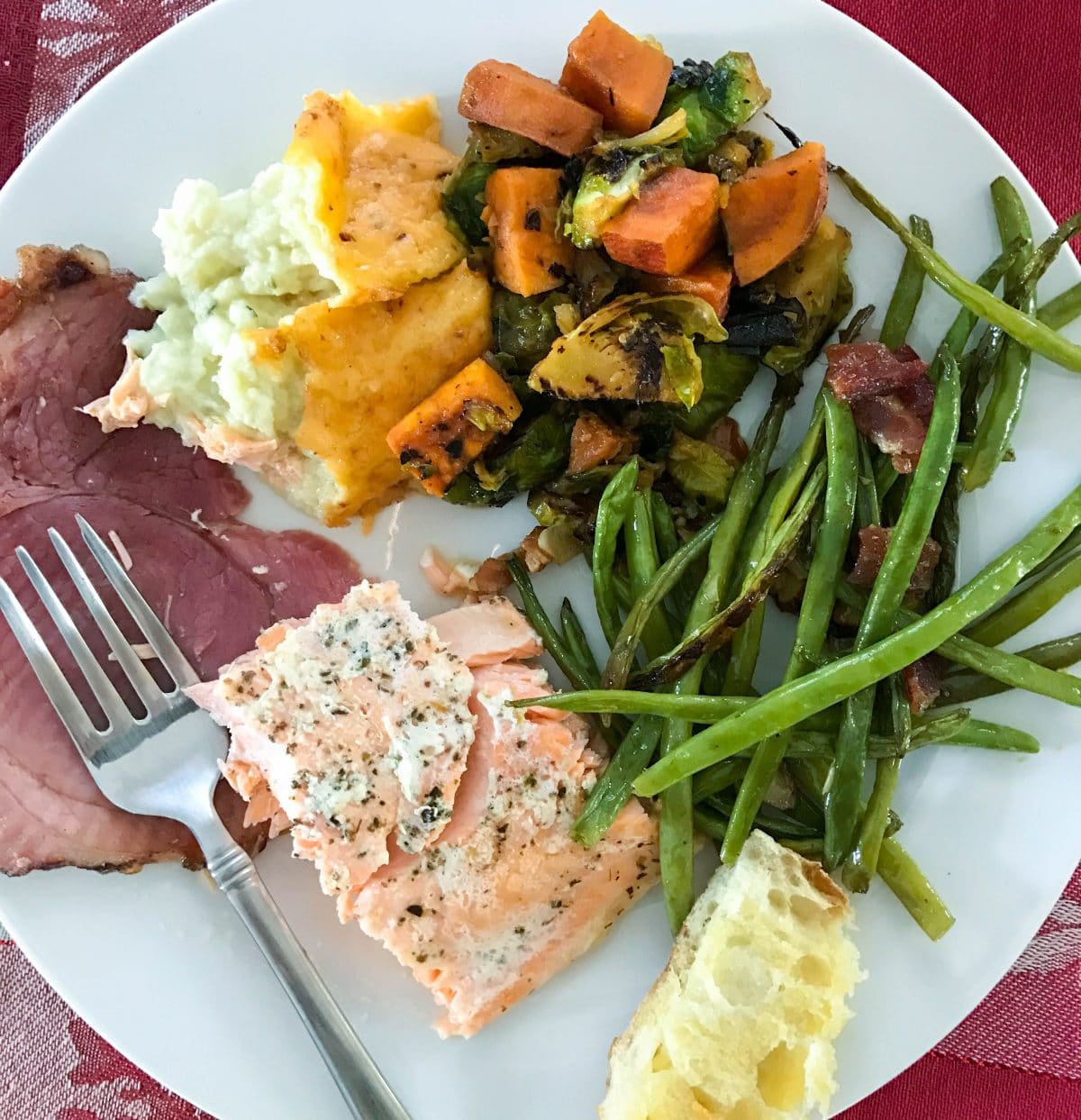 Then we had dessert of more cheese cake and pecan pie.  We spent time laughing and hanging out, just doing the family thing.  Our family friend who reads the blog read my post the other day about tamales and offered to bring over tamales, which were delicious!  I’ve been eating them for lunch every day! Then, we watched home videos for a little while.  Which was, of course, hysterical.  (Me on the right.) 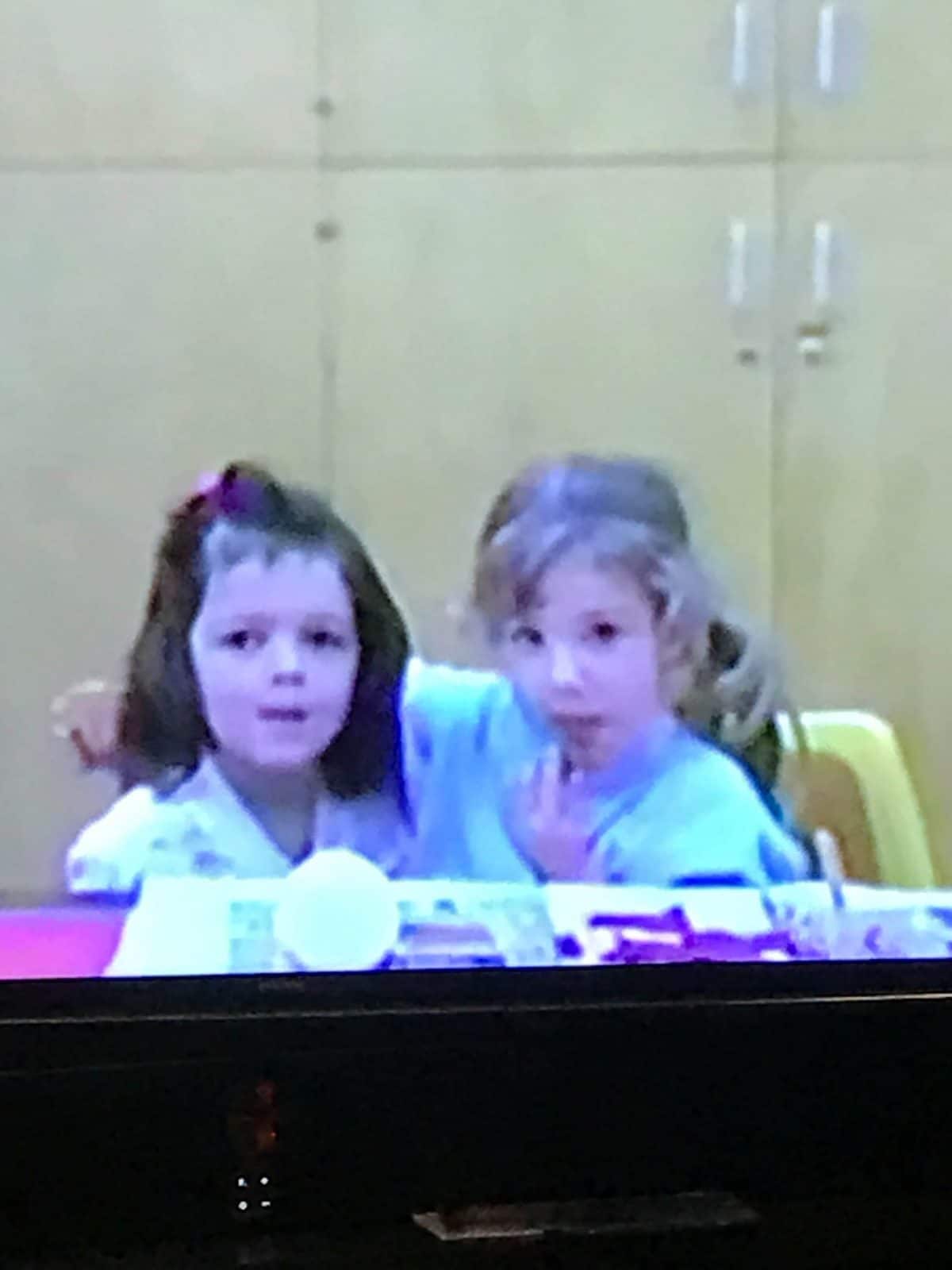 We watched Mr. Hungry’s too, and all I can say is his mom is a saint and I’m afraid to have a boy some day.  That kid was just exploding with energy! hahahahahah

I know Hannukah started on Christmas too right?  How was everyone’s holiday?