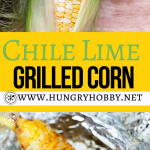 Traditional buttery corn on the cob with a kick! This Chile Lime Grilled Corn on the Cob Recipe is a little spicy, salty, and buttery in every single bite! 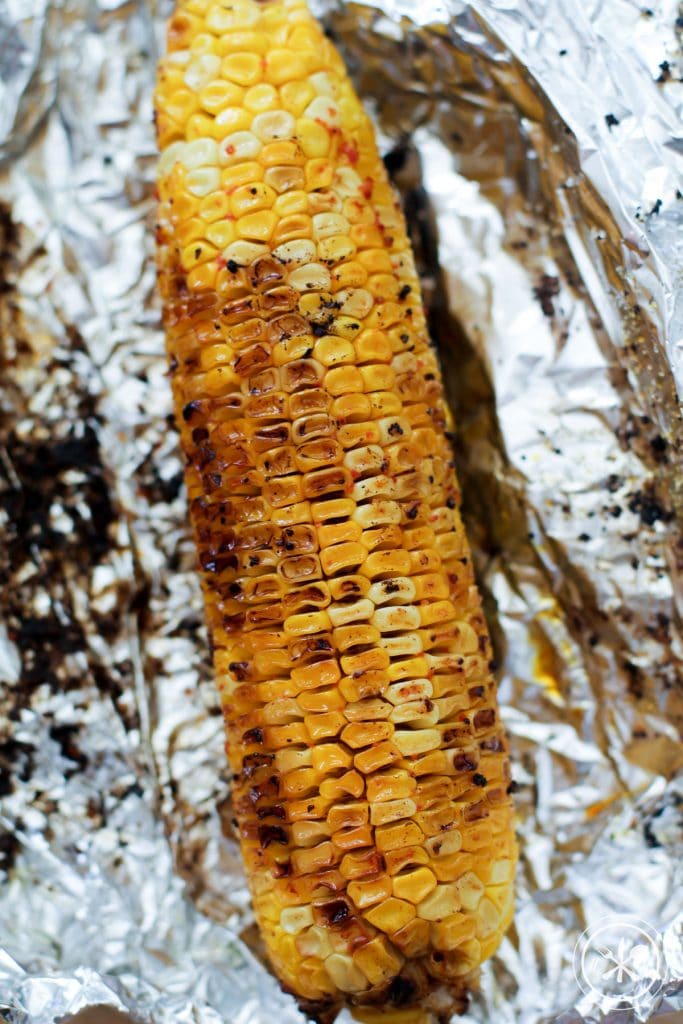 Hi, friends!  How is your week going so far? Mine is going well, but I had to move up my bedtime to 8 pm, other wise I have to take a nap during the day.  This pregnancy thing is no joke, besides the fatigue I’ve had a lot of food aversions as well.  Lately, though, grilled corn on the cob always sounds AH-MAZING.

I won’t lie, corn on the cob was my sole dinner food a few times.  At least it’s somewhat healthy, right?  Better than corn chips anyway. 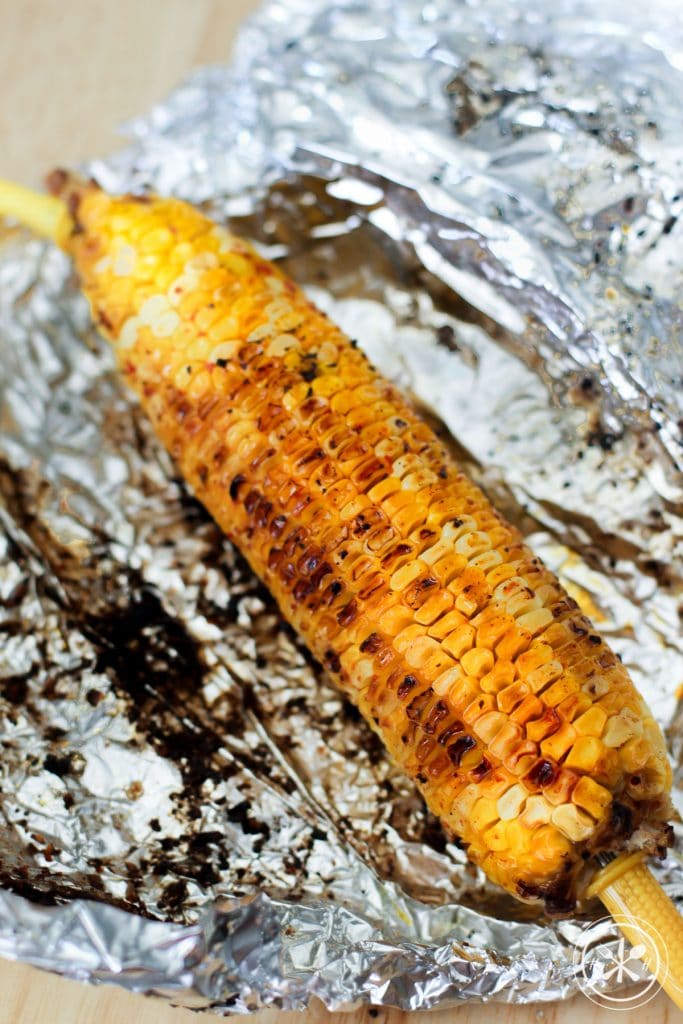 Up until this summer I’d never made corn on the cob.  In fact, I never bought any fresh corn at all before. I asked the produce guy at sprouts, and he said to look for big plump ones and for sticky brown tassels (the hair like things sticking up from the top.) That way you can be sure the ear of corn is full of kernels, as opposed to one that has kernels that don’t start till halfway down the ear. 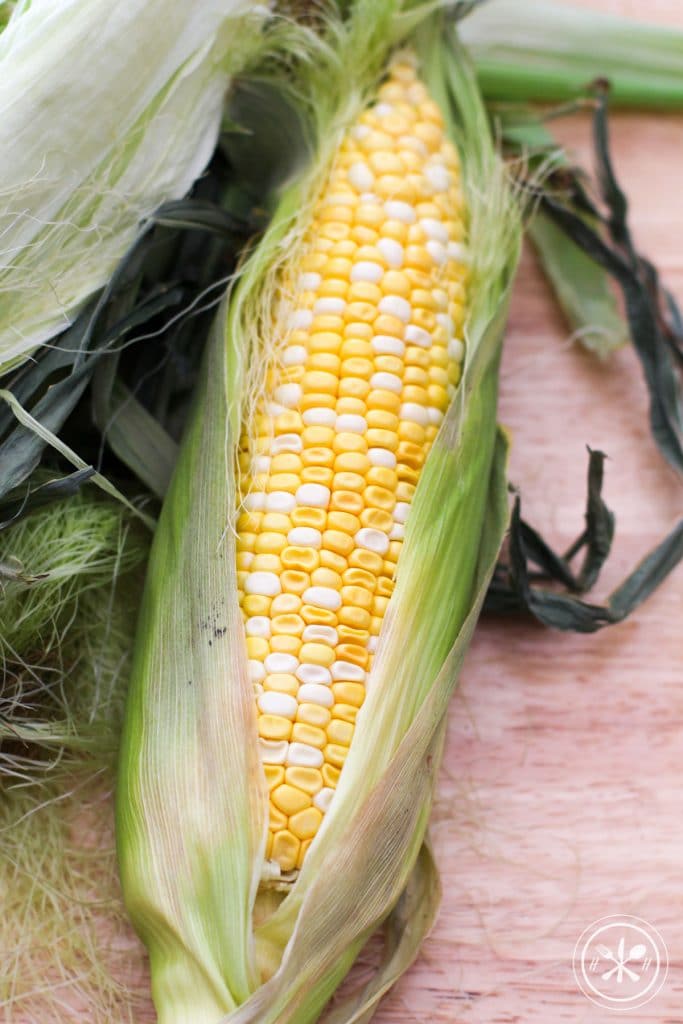 I looked up several different ways to grill corn; there seem to be a ton of methods to chose from.  I decided to remove the husk first because I prefer the prep work at the beginning and to be able to eat when it is done.  You can grill the corn in the husk, but then you have to wait to add seasonings and butter.

I decided to shuck mine, rinse and dry it, then add seasonings.  I think the corn would become more flavorful that way, but who knows, other people swear by other methods. 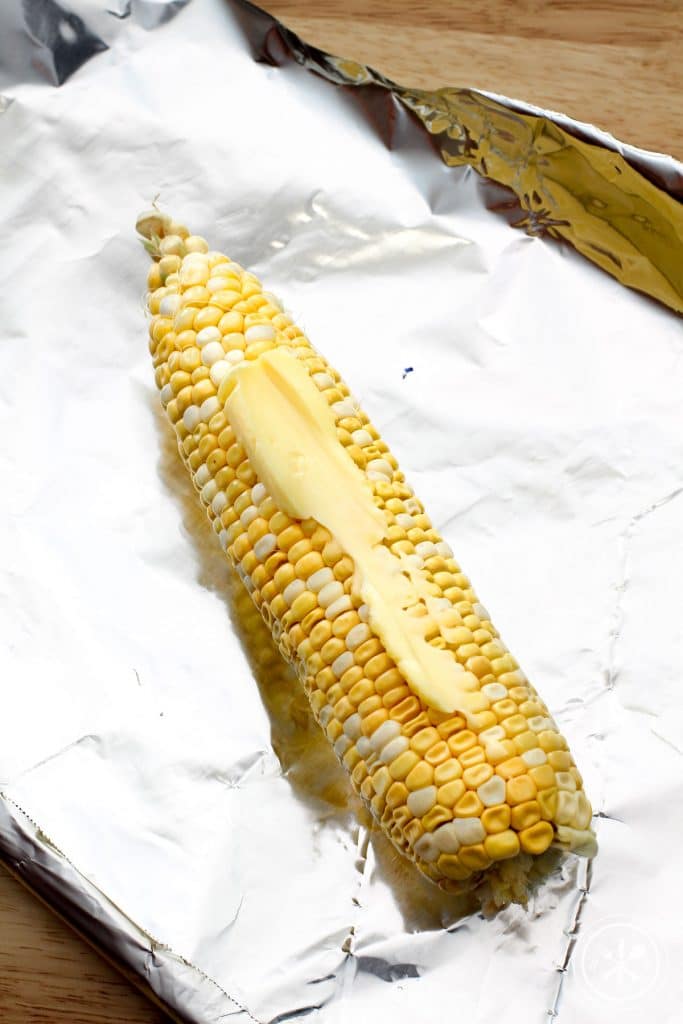 I used grass-fed Kerrygold butter, but you could use ghee or a high heat oil (see are you cooking with the right oil?).

Make sure you spread that shiz all over the place, that’s the best part about eating corn! 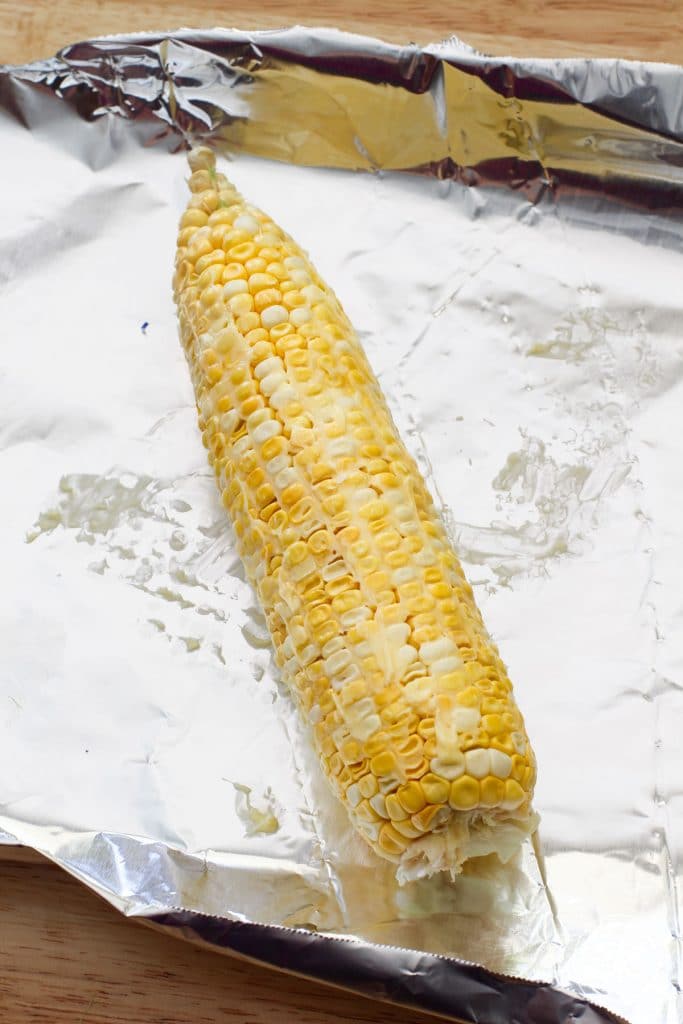 I kind of feel like I haven’t had any “pregnancy cravings” at all, mostly just food that sounds “tolerable” at the moment.  But, I’d have to say that I have been eating a crap ton of Trader Joe’s Chile Lime Seasoning.  I eat a ton of it on mangos, but then I got the bright idea to put it on corn.  That’s when I decided to start taking photos for this recipe; I just knew it would be so delicious. 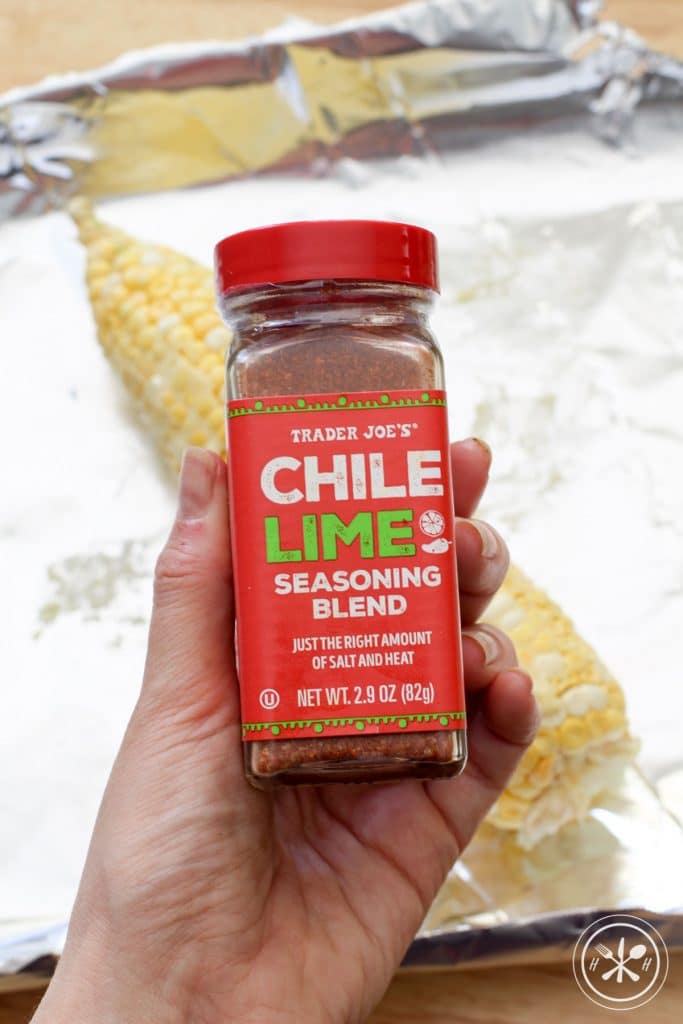 I know it has salt in it, but I also ended up sprinkling a little bit of extra salt on each ear of corn as well.  I only did two ears of corn with the Trader Joes chile lime salt, but Mr. Hungry and I agreed after that I should have used it on ALL of them.  We tried to sprinkle some of the seasonings on the other two ears of corn after they were done, but it wasn’t the same. 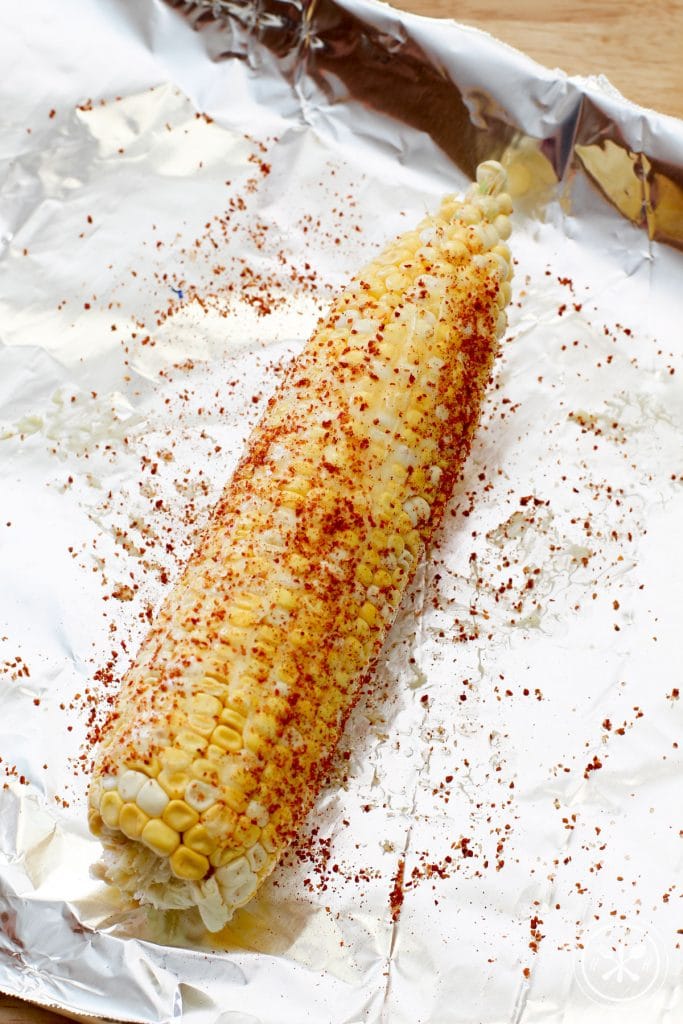 Somehow the combination of the butter and chile lime seasoning on the grill creates the perfect kick when biting into the corn.  I don’t even know how to describe it except for amazing, delicious, and you can’t have any of mine make your own kind of good! It’s sweet, buttery, salty, with a little-unexpected limey kick at the end that will have you standing over the sink devouring it.  Or maybe that’s just me?

So I guess you could call that a craving? 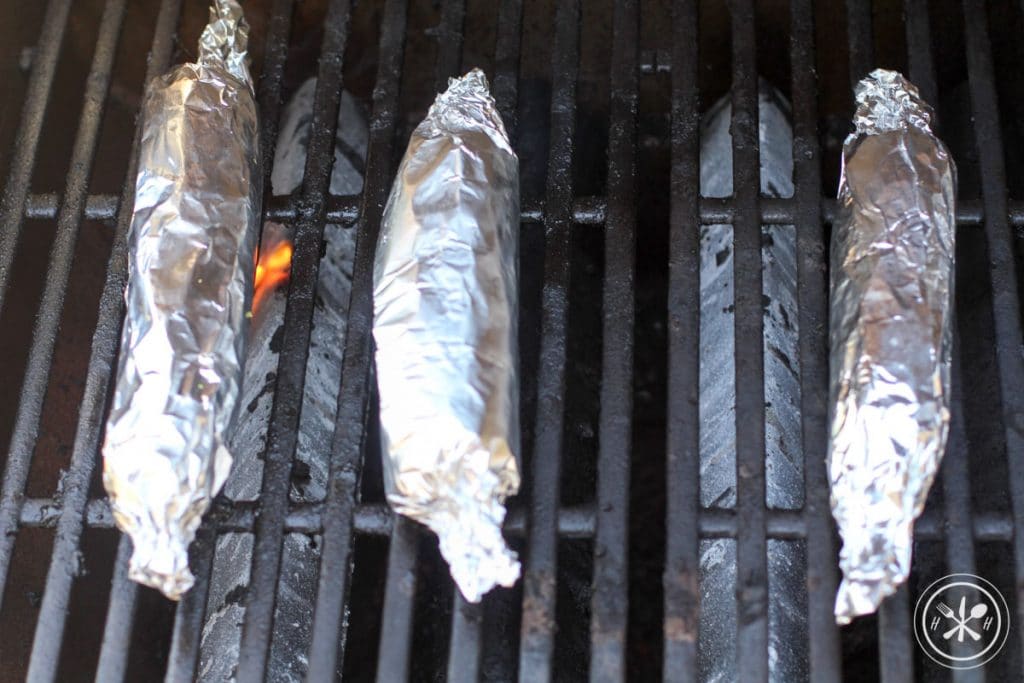 Either way, corn on the cob always reminds me of my Grandma because I use her little corn holders.  Which I always thought were some unique 40’s thing, but turns out you can get them on Amazon for super cheap by the dozen.  So not uncommon, but they still remind me of her, and that’s what counts! 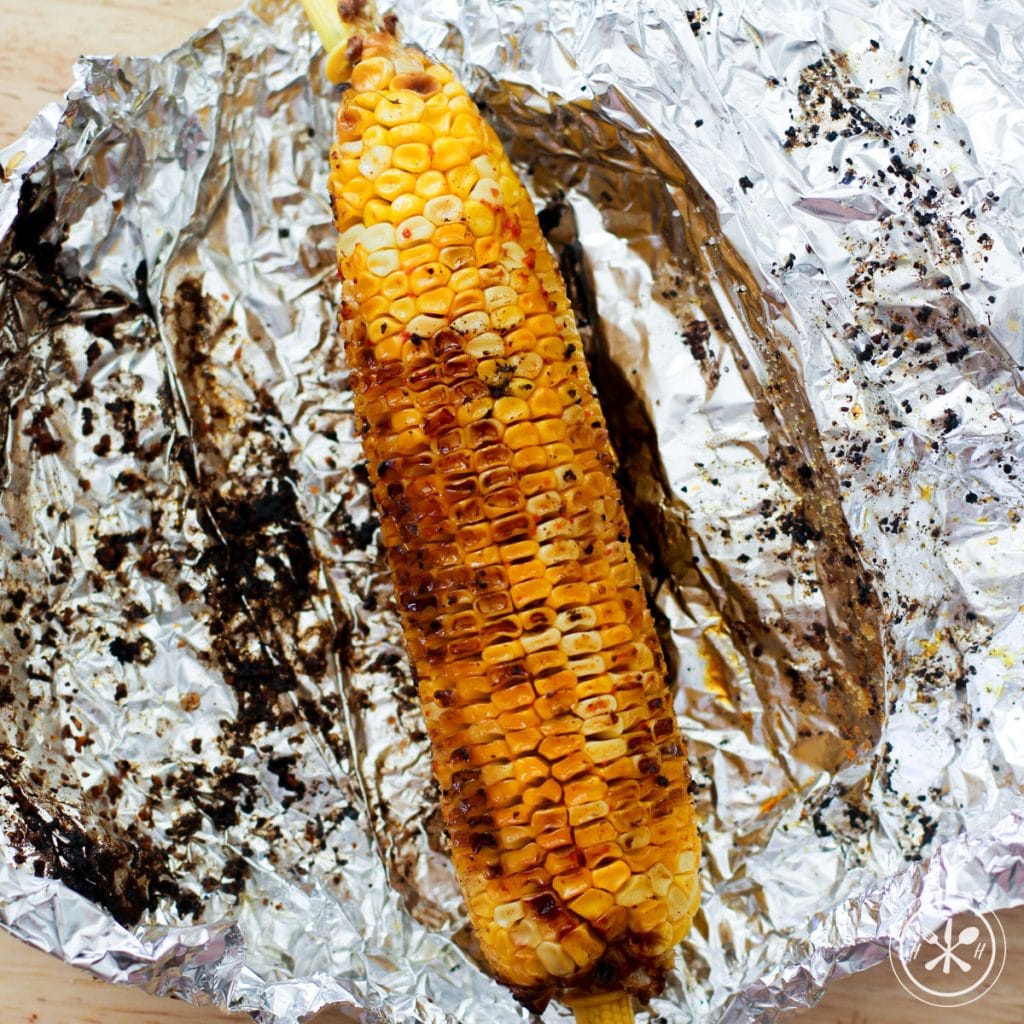 Let me know if you get a chance to try this recipe if that’s what you want to call it.  Sometimes the simple recipes are the best recipes, right?

Traditional buttery corn on the cob with a kick! This Chile Lime Grilled Corn on the Cob Recipe is a little spicy, salty, and buttery in every single bite! #glutenfree #vegetarian #vegan #healthy Click to Tweet 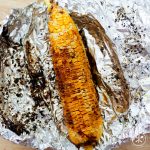 Traditional buttery corn on the cob with a kick! This Chile Lime Grilled Corn on the Cob Recipe is a little spicy, salty, and buttery in every single bite!
Servings: 4 ears of corn
Calories: 110kcal
Author: Kelli Shallal MPH RD 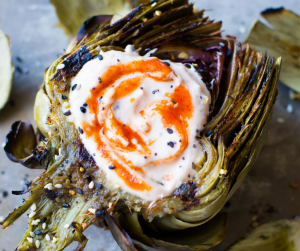 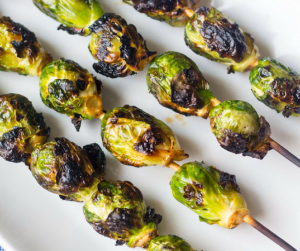 Pin this recipe for later and follow @hungryhobby on Pinterest for more healthy recipes, quick workouts, and nutrition tips!

Another thing I’ve loved during pregnancy was Kicking Horse Coffee. I do half of their swiss water process decaf (fewer chemicals) and half of their regular in my cold brew maker. So that’s what I’m giving away today for this week’s blogiversary celebration!