Good afternoon friends! I know this post is going up later than usual, but that’s life these days.  I’m also playing catch up because I took yesterday off after many months with zero breaks. It was time for a break.  Since I jumped into a recipe project after the spring semester ended, I’ve either been taking care of the little one, working, or honestly, sometimes both.  Whenever my eyes were open, I was on the clock, and I was starting to feel burned out.  So yesterday I took a day off, spent a laid back day with the little one, and thought I’d share it with you guys!

After we got back from our usual 90F 6:30 am walk (which I ate an RX bar during and KJ ate a fig bar during), I desperately needed to clean up the kitchen, so I cleaned the top half of the kitchen (counters, dishes, etc.) while little man simultaneously wrecked the bottom half. 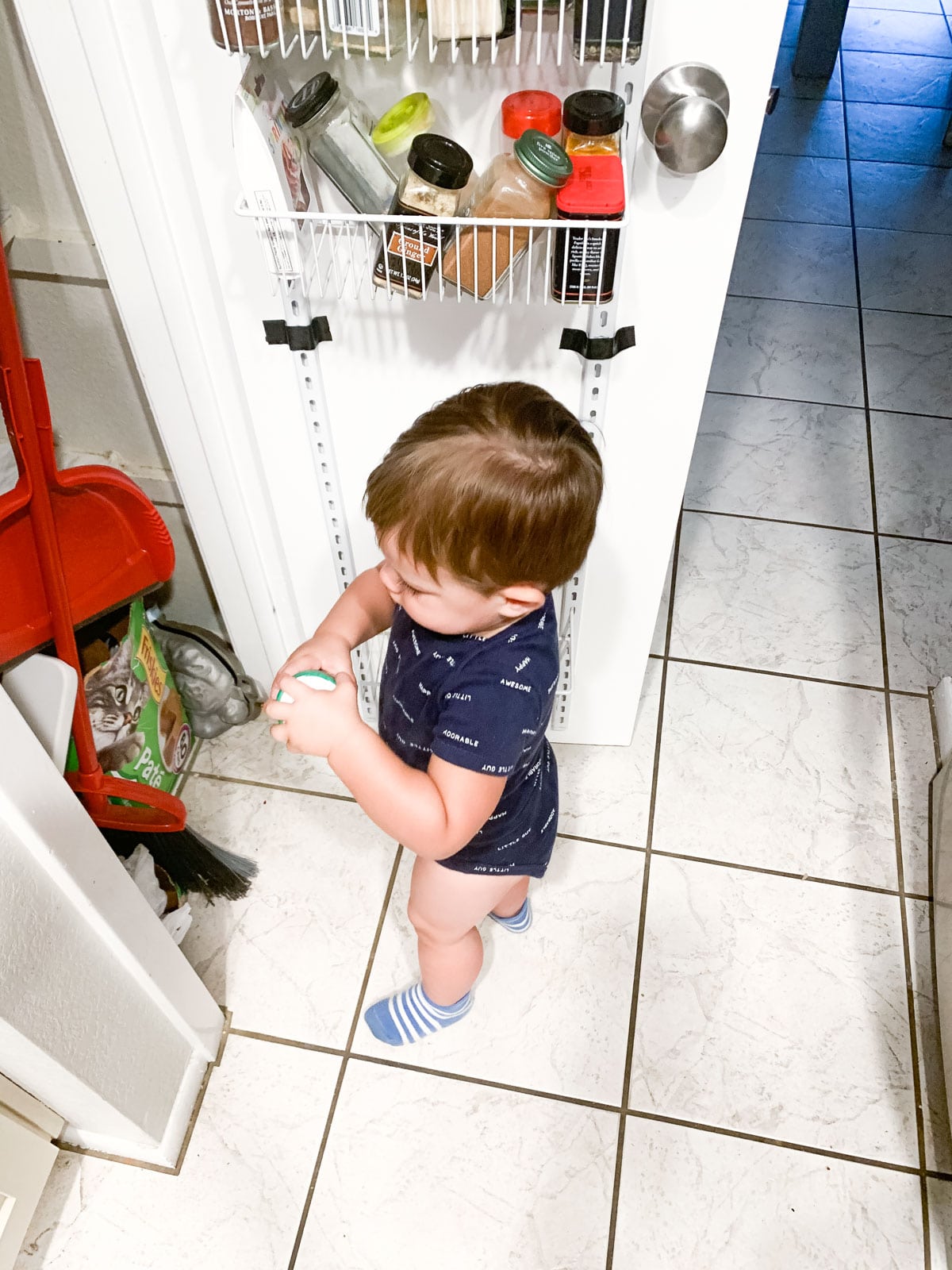 I also decided to try a steak recipe from the Skinnytaste Air Fryer cookbook. 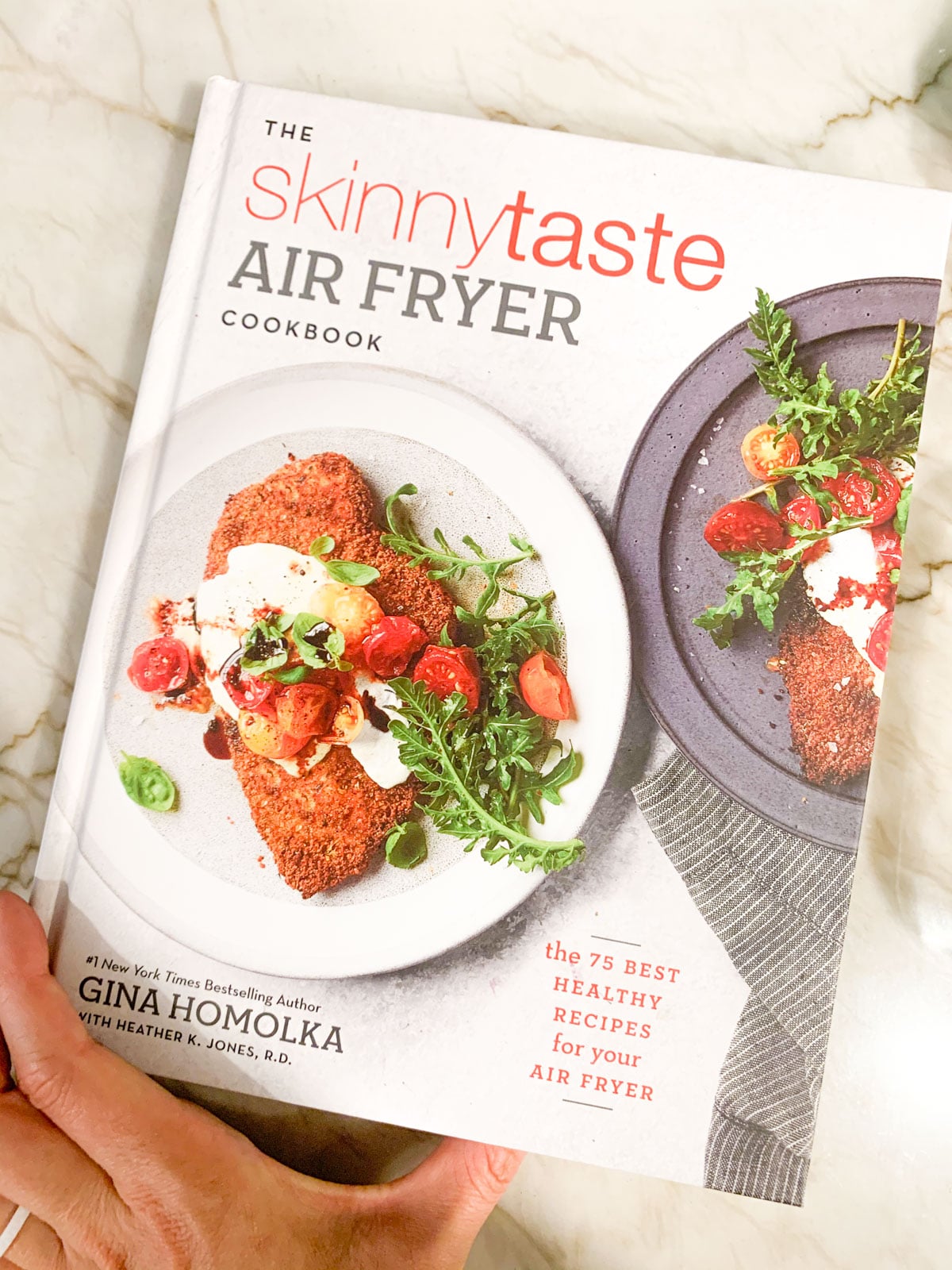 I decided to try steak in the air fryer, so I used her marinade, which was a combo of soy sauce (I used coconut aminos), ginger, sugar, sesame oil, and red pepper flakes. 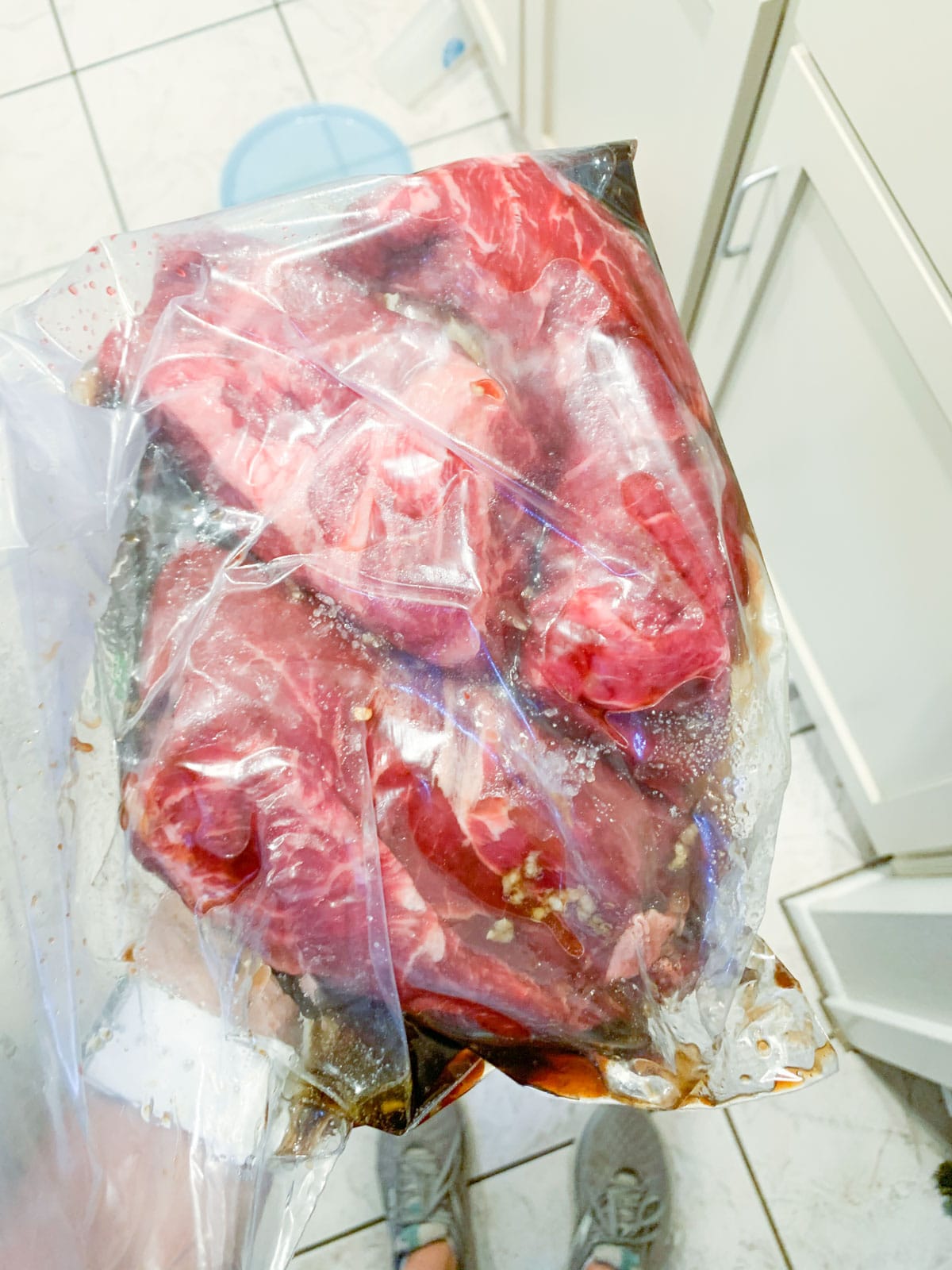 Meanwhile, KJ played with my new condiment cups, I bought as a food photo prop. 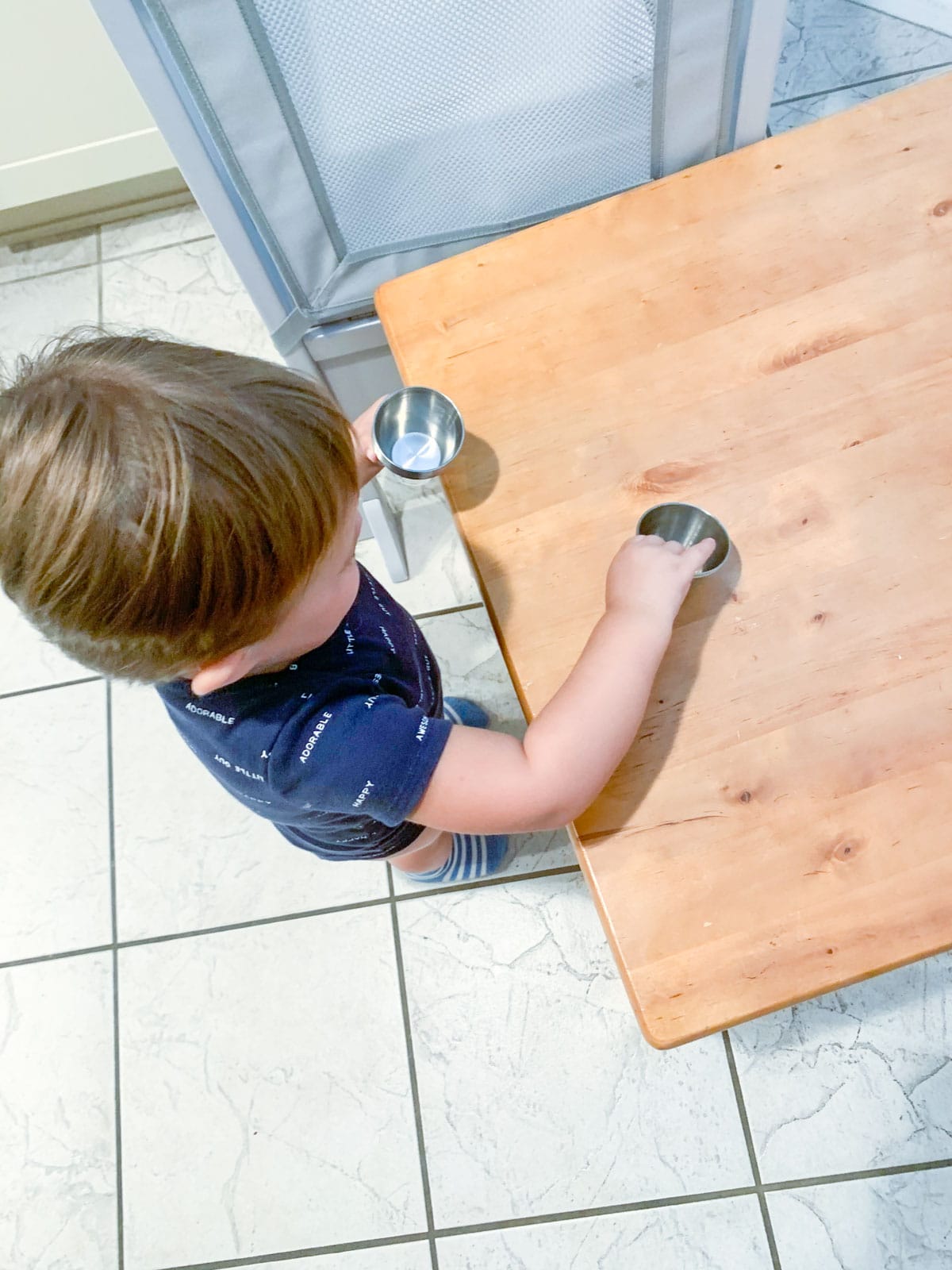 And at some point, he had a snack of blueberries and pea snacks.  His “smile” face lol 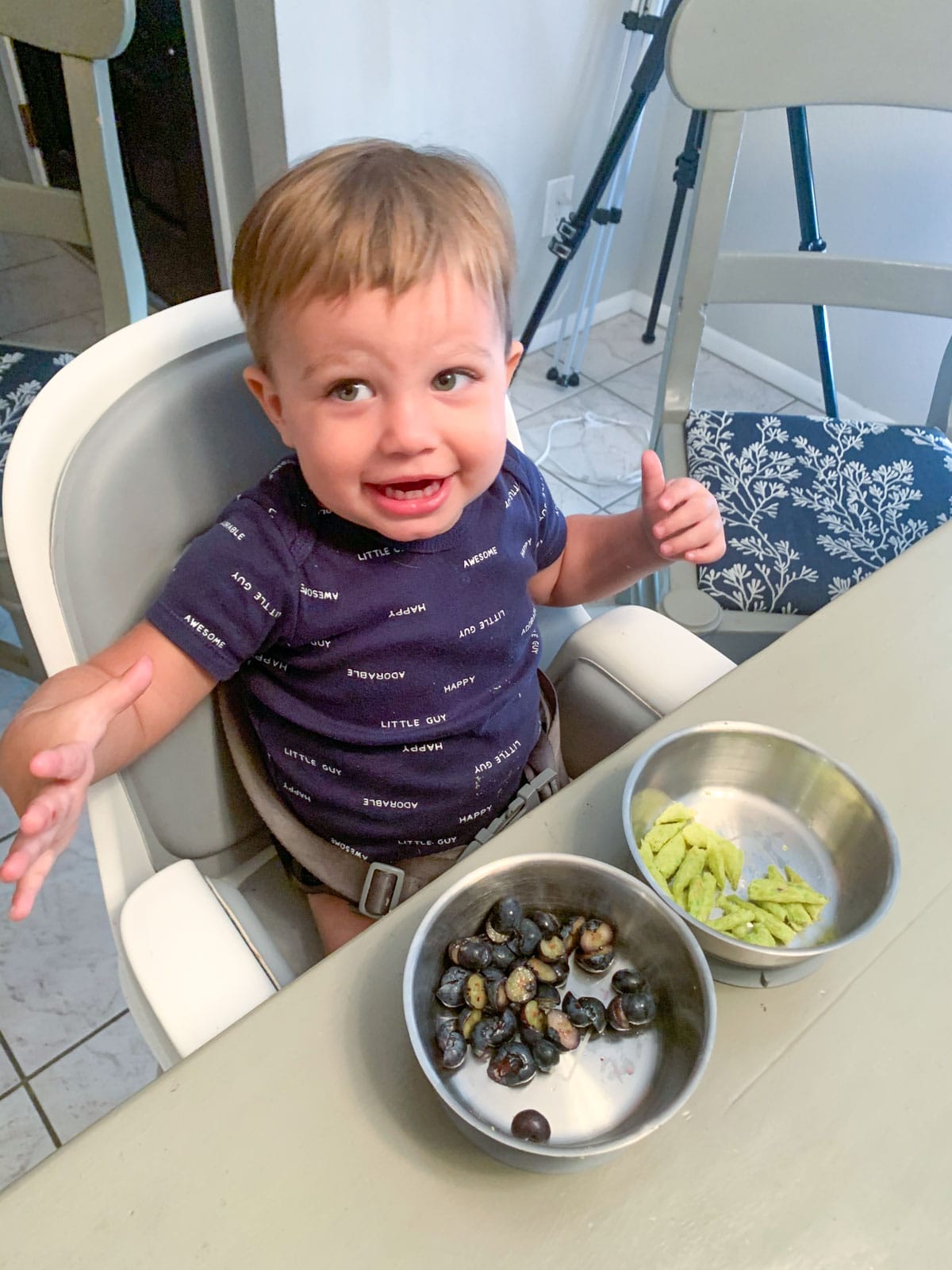 I squeezed in a super quick workout next, I think the entire thing was 24 minutes.  Double trouble strength workout on Aaaptiv, which was a warm-up and then a hit circuit.  I skipped some of the rest because I felt like I could, so it wasn’t the most challenging workout in the world, but at least I got something done! On days I workout and it’s just me and KJ at home, I’ve noticed I can get less than 30 minutes in before he starts breaking down.  So anything is better than nothing! 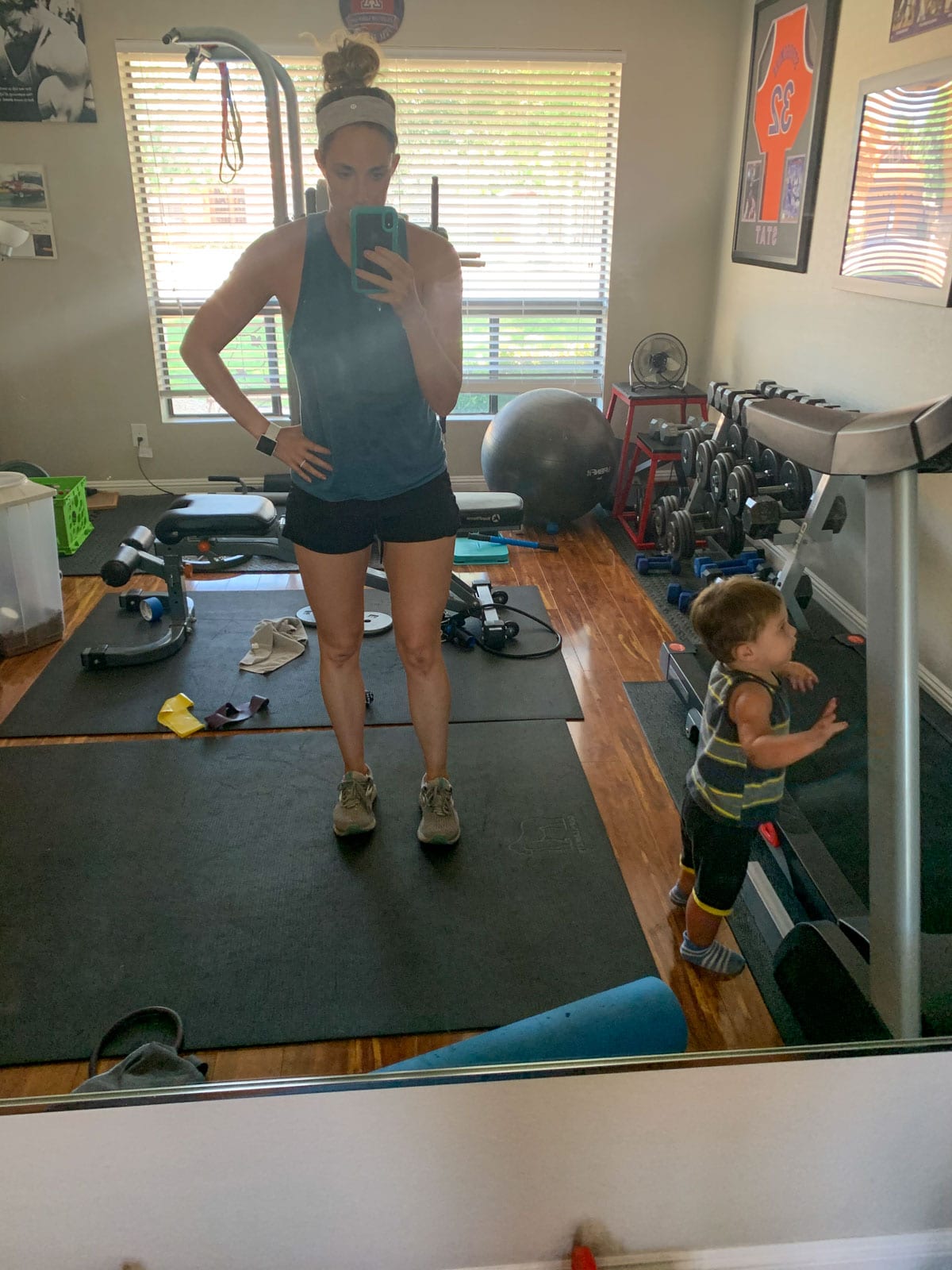 The rest of the morning was spent playing outside at his water table until lunchtime.  Lunchtime was around 11 am and he had mixed root vegetables (from Costco which I steamed on the stove, not in the bag), cut up Chelan Fresh cherries I had leftover from all the summer recipe development I’ve done with them, hummus, and cheese toast. He kept moving the cheese toast off his plate (so that’s why you don’t see it below), but once I got him to taste it, he ate all of it! Although he used to love hummus, I haven’t got him to touch it in months, I keep offering it though just in case.  I actually took about five tries for me to get him to eat cherries, so I know that trying frequently is the key. 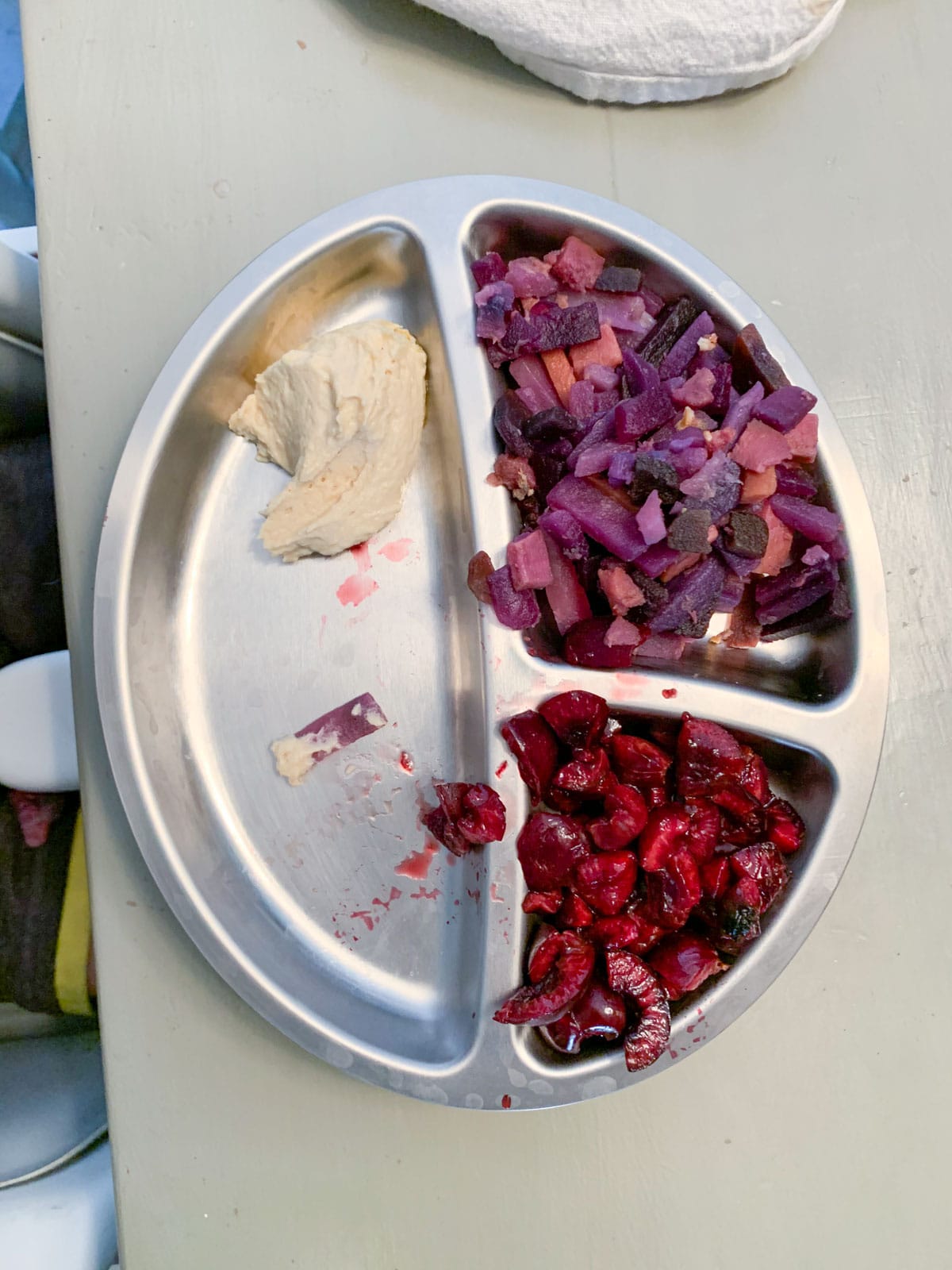 Once he was down for his nap, I promptly laid down and took a nap myself.  Since COVID started, I’ve made it a priority to get 8-9 hours of sleep a night, and it’s been glorious.  But, with it being SO SO SO hot in the mornings, I’ve had to get up at 5 am every day to get out the door by six-ish, so it isn’t too hot.  So, now I’m getting closer to 6-7 hours of sleep or less, and I’m trying to make up for it because I can feel the difference.  Hopefully, in August, it will be overcast a lot (it usually is due to monsoon season), so we won’t have to leave quite as early!

After I woke up, I got up and made lunch of a salmon burger (from Costco), which I topped with creamy chipotle sauce, hummus, carrots, and kettle fire barbecue chips. 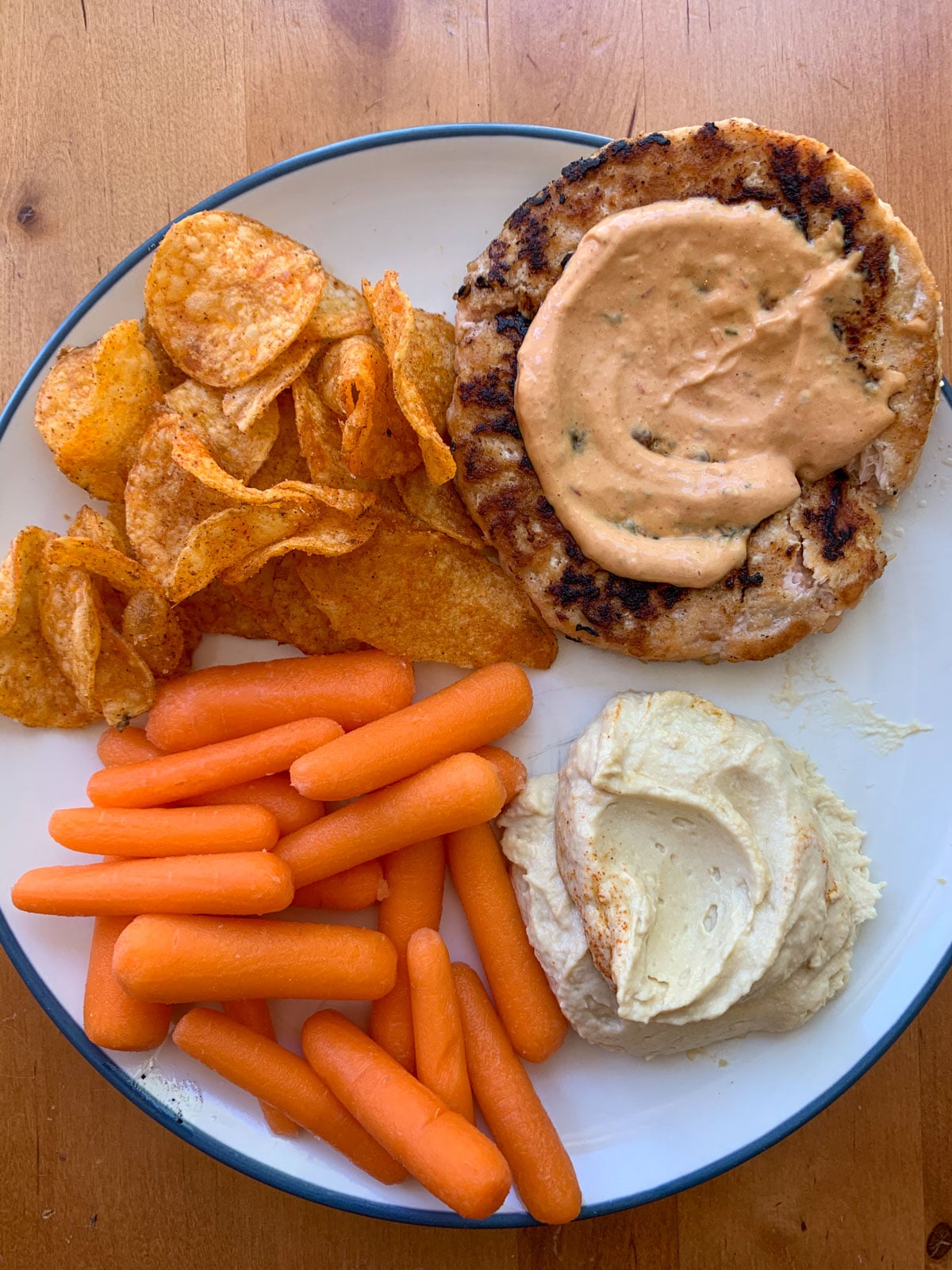 Then I watched a bunch of episodes of Jane the Virgin, my latest Netflix obsession.  KJ ended up sleeping over three hours, which did make me feel a little guilty about not working, but I reminded myself I hadn’t taken a day off in months, and I felt better.  Also, late nap = late bedtime, so it wasn’t exactly like I was getting off the hook.

After he woke up, he had apple sauce packets (from Costco ), and then we watched a little afternoon TV.  After 20-30 minutes of that, it was time to head back into the heat and go swimming! (At some point, I drank an Orgain protein shake from Costco before we headed out.)  P.S. Yes we did just go to Costco if you are wondering why so many Costco items! 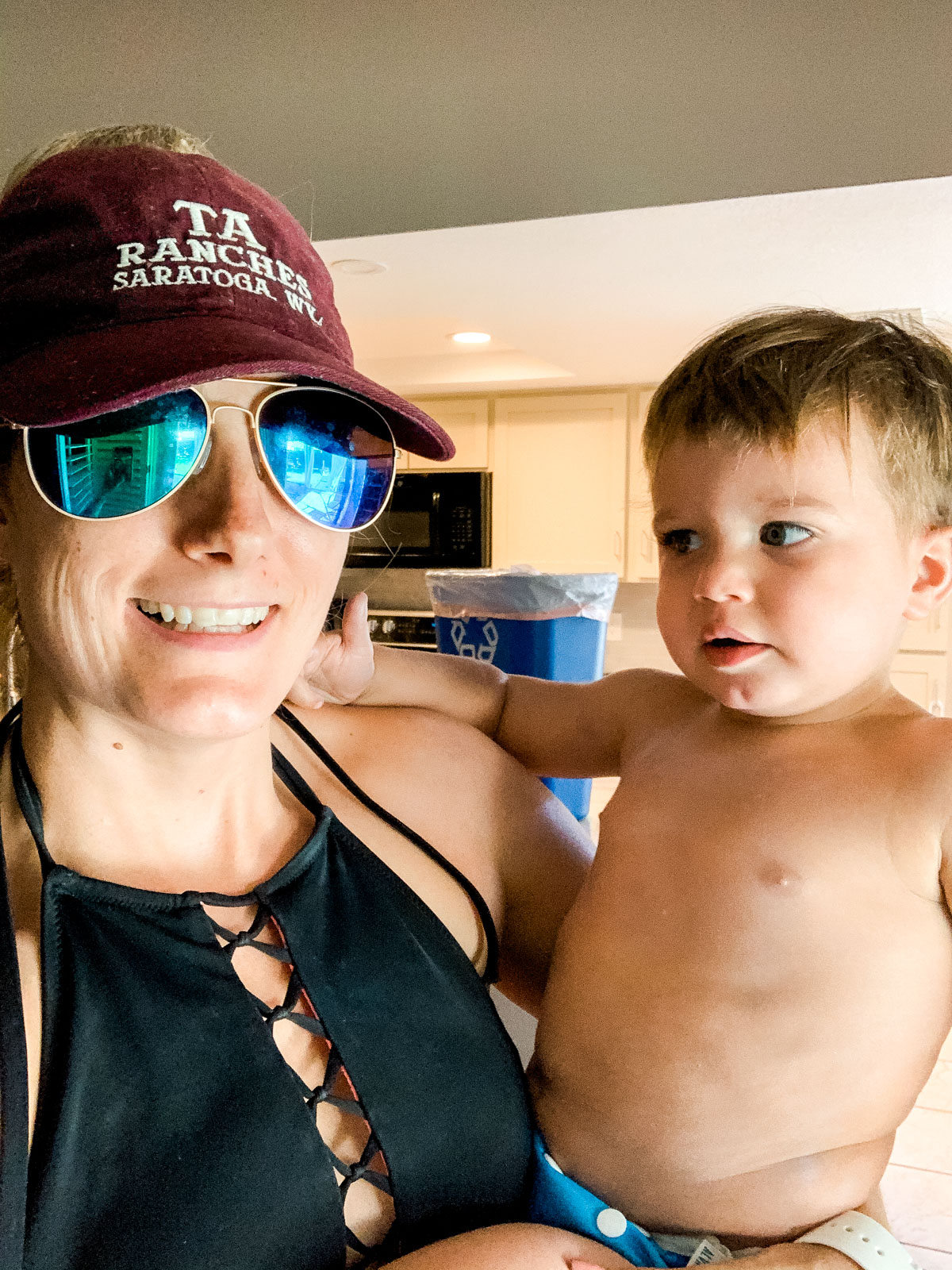 We swam for over an hour before we came inside, and by that time, Mr. Hungry was home.  Mr. Hungry played with KJ while I made our dinner.  The steak (which we always get from Butcher Box, see why I don’t buy organic beef here) turned out delicious. I’d definitely use the air fryer again to make steak, but cast iron with butter will forever be my favorite way to cook a steak! Oh, and PS we like our steak with minimal pink so I extended the cooking time from 12 minutes (which she said was for medium-rare) to 18 minutes and it was still tender, but cooked all the way through. 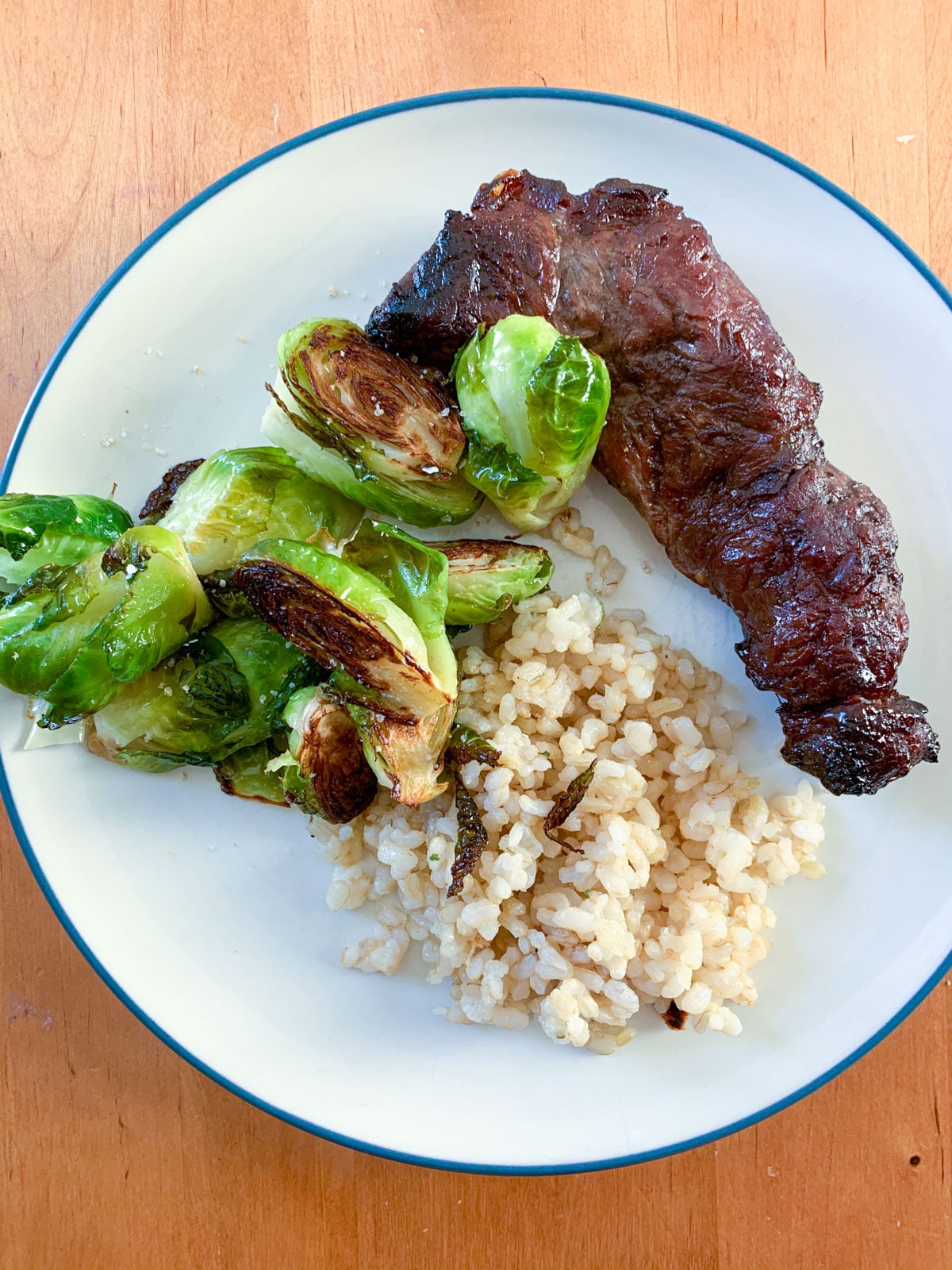 I’d show you what KJ ate, but he ate nothing off his plate and all the steak off my plate!  So he definitely approved of the steak!

After dinner, we went on a casual 100F stroll around the neighborhood, came back, and played for a while with his toys.  Since he slept in so late, dinner was way earlier than bedtime usually is, so I gave him a snack of toast and peanut butter before we did the whole bath time, bedtime routine.  He went down at 8:30 pm, and mama was in bed by 9:30 pm, after washing up and texting with a friend for a bit.

That’s it! That was my day “off” from work, and it was much needed!  Thanks for stopping by the blog today and I’d love to know how your week going internet friends!?!