Happy Wednesday everyone!  This morning started off with Physical Therapy followed by a spinach omelet (2 eggs, 1/2 cup egg whites, handful of spinach, garlic salt, pepper, chula sauce) with a half an avocado and ketchup  as I finish up this blog post. 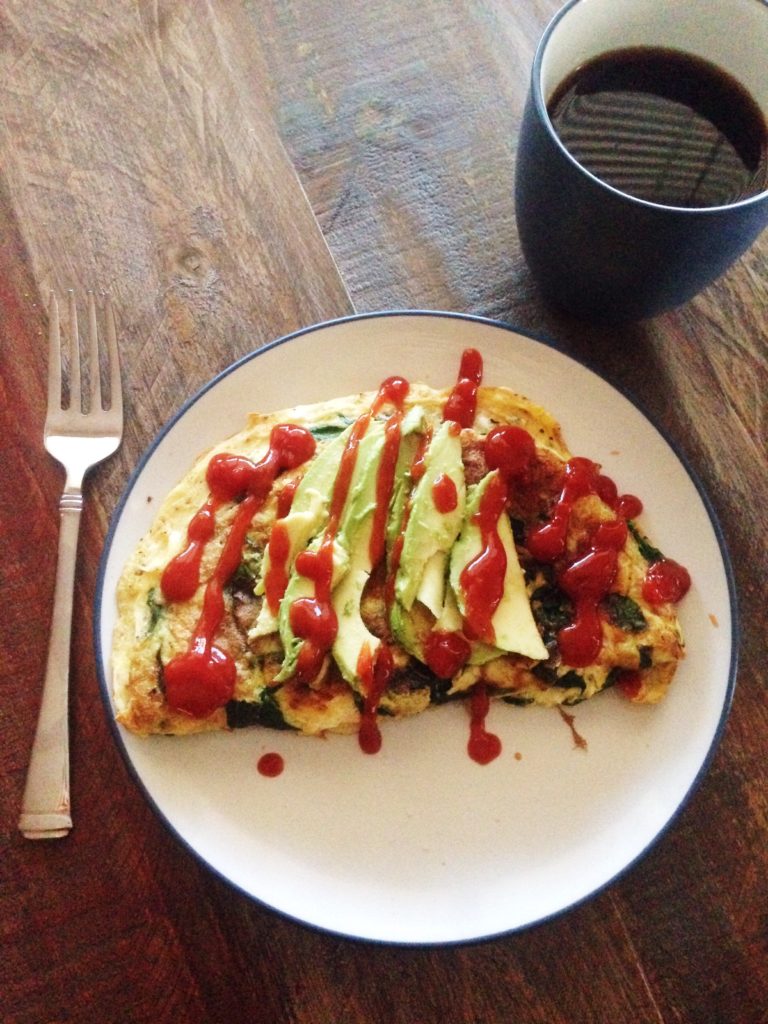 I’ve got to run to work soon but let’s back track to yesterday really fast.  Yesterday started off with a workout that included you guessed it upper body and core work, I also did some rowing.  Then I came home, got ready and really kicked off the day with a delicious egg muffin sandwich which I added avocado slices too.  Of course I also had a cup of Anchor Farms Smores coffee which I LOVE, the caramel macchiato was a bit of a disappointment though I’ll have to say.  Side note, this job is literally forcing me to wean off of caffeine, which I love and hate. Once I get to work I’m literally running around everywhere and it’s difficult to carry a coffee cup around, plus we can’t have anything other than water on the gym floor so I can’t even have it there.  Yesterday all I had was this one cup of coffee which is significantly less than usual. 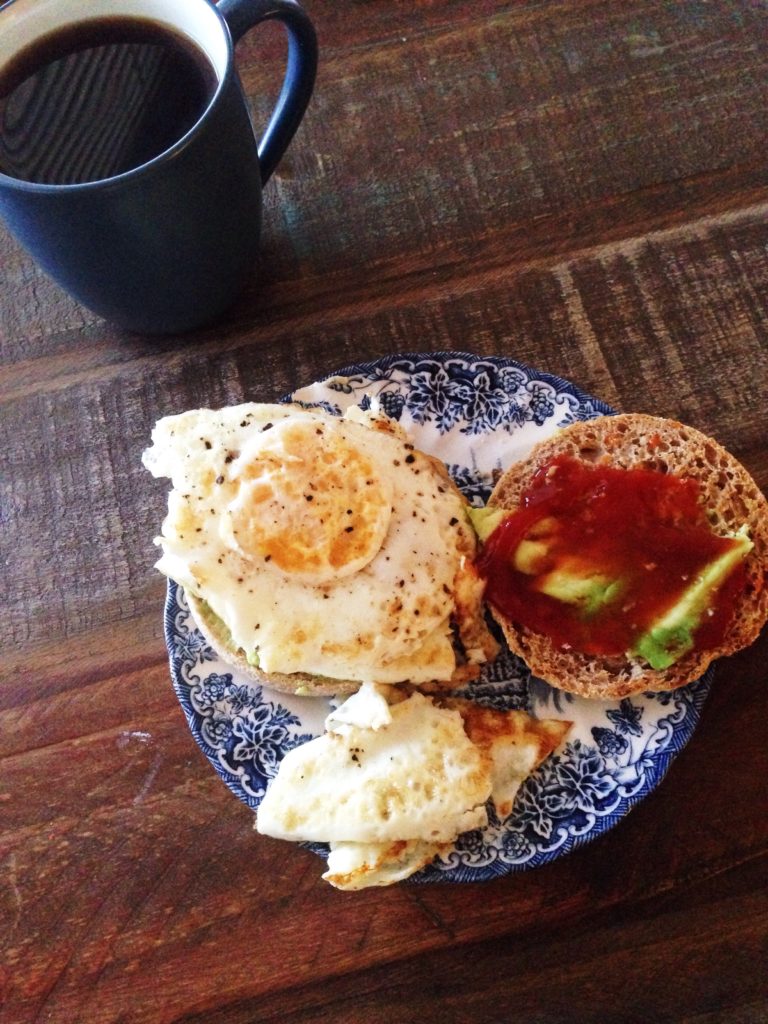 For lunch I packed a taco salad with romaine lettuce, grass-fed shredded cheddar, chicken chorizo and salsa dressing with a Vanilla Chobani Yogurt.  This is a picture of today’s salad (which is the exact same) since I couldn’t really take a picture while I was in a leadership meeting yesterday.  It’s really cool how from day one upper management believes in my potential to be a leader in the company some day.  I’m sure it helps that I was a manager before, but regardless, for the first time in my professional career I feel truly valued for all the skills I bring to the table and I’m really grateful for all the support they are providing and confidence in me they’ve shown. 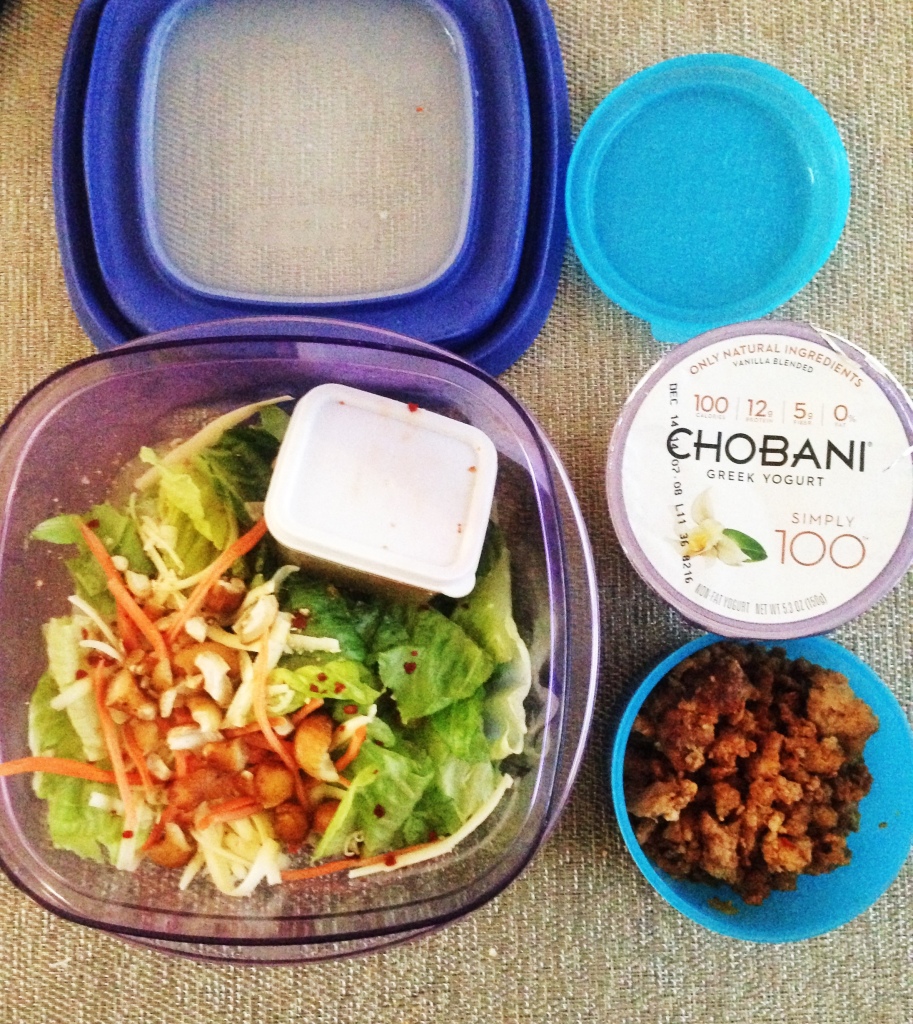 I’m also really grateful for these jalapeno cashew additions to my salad, I felt like it really took it from plain old salad to something you would get in a restaurant, delicious! 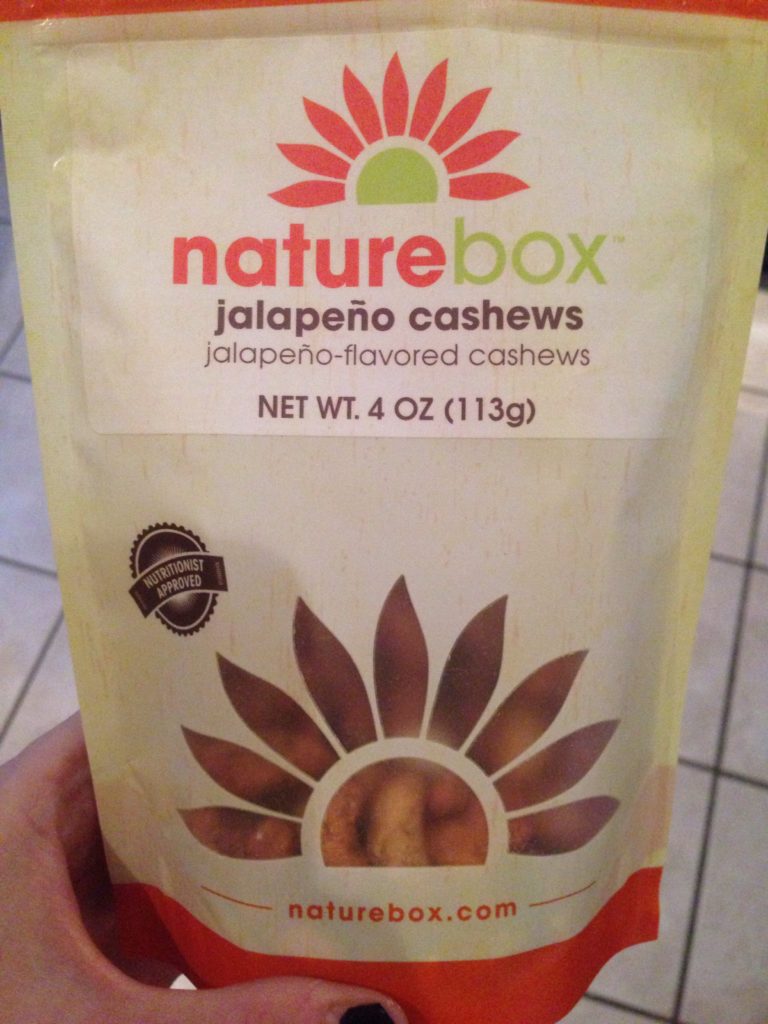 In the afternoon I kind of had a dietitian fail, aside from protein powder samples I didn’t eat again until dinner at 830pm.   That’s an 8 hour window, that’s crazy to me because I am not the type of person that skips meals or snacks.  I was pretty grateful I had thrown some Salmon in the fridge to defrost throughout the day.   I called Mr. Hungry while I was on my way home and he was able to get them going on the George Foreman (my favorite kitchen tool).  Then I microwaved some frozen green beans with butter and garlic salt while he finished up the Salmon.  It was literally the best Salmon I’ve had in my life, I was really hungry at that point (topped with homemade Avocado Oil Mayo)! 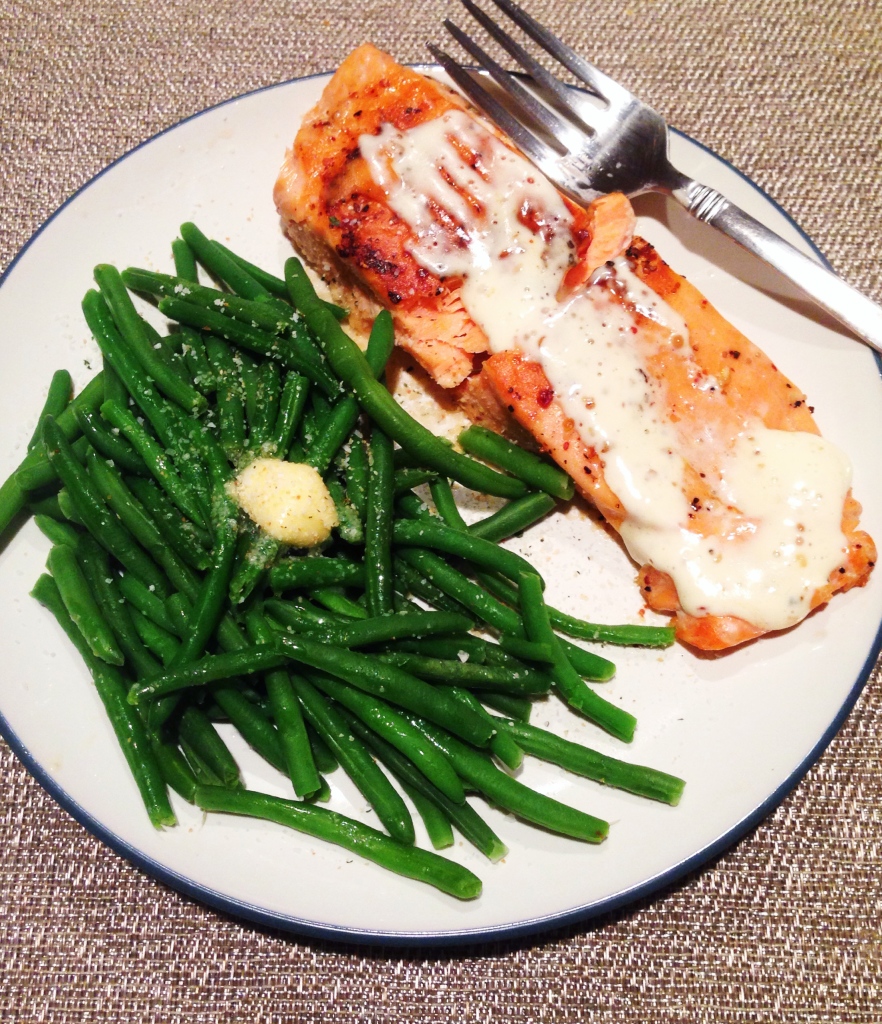 After dinner I tried not to attack the snacks too hard and be conscious of the fact that I had waited too long in between meals which often leads to overeating.  I did have some chocolate granola (so good) and a half a date with sunbutter though, which is equivalent to what I would normally have so I think I did an okay job. 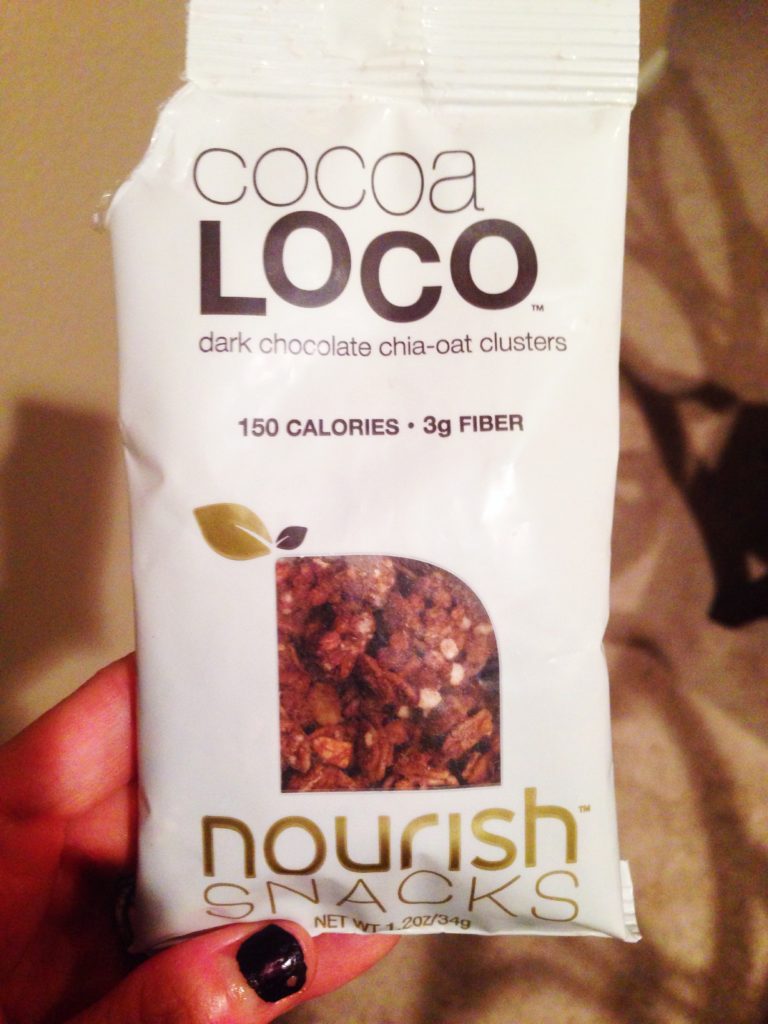 I think I’ll be bringing some easier snacks with me to work and trying harder to eat them around four or five instead of going eight hours without real food (protein shake samples do not count)!  It’s sooooo not like me to go that long between meals!  New schedules always take a bit to get to used to though I guess! 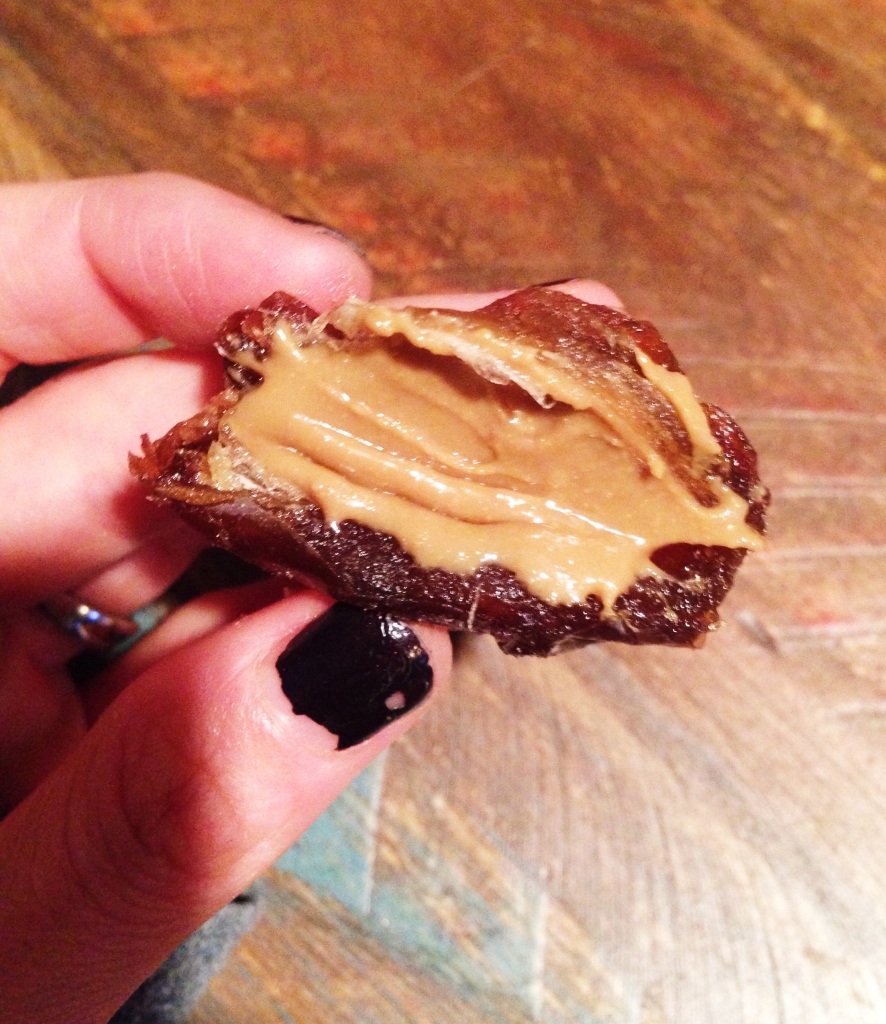 Tonight we will be prepping for Thanksgiving food!  Mr. Hungry and I are having my mom and his grandma over, it’s going to be a small group but we are excited to play hosts!  Mr. Hungry is making the Turkey and helping me make the stuffing.  I’m also making roasted brussel sprouts and cauliflower.  For dessert/ sweet side dish I’m making a sweet potato casserole.  All I have to say about all that is wish us luck!!!!!

Questions of the Day:

What are you doing for Thanksgiving?

What is your “have to have dish” at Thanksgiving?

Truth be told, I like Thanksgiving leftovers way better than I like the actual Thanksgiving meal.  I’m bummed Mr. Hungry’s parents moved to California because there will be no Mama Shallal’s famous Turkey Enchiladas unless I make them myself.  In recent years the Turkey Enchilada’s have become my must have after Thanksgiving tradition.