Hi Friends and Happy Monday!  I’m a bit peppier than most on a Monday because I’m not working except for a meeting from home.  Right now I’m loving it, we will see how I feel about working weekends later.  That being said, so far so good at the new job I’m still loving it and I have a few posts to write about things I’ve experienced so far like getting metabolic tests done, interpreting labs, and more.  I digress, let’s back up to Saturday which started with a Spinach Feta Wrap and Christmas Blonde Roast small coffee from Starbucks before going into work at 8AM. I did not love the Christmas version of Blonde Roast, definitely not a fan. 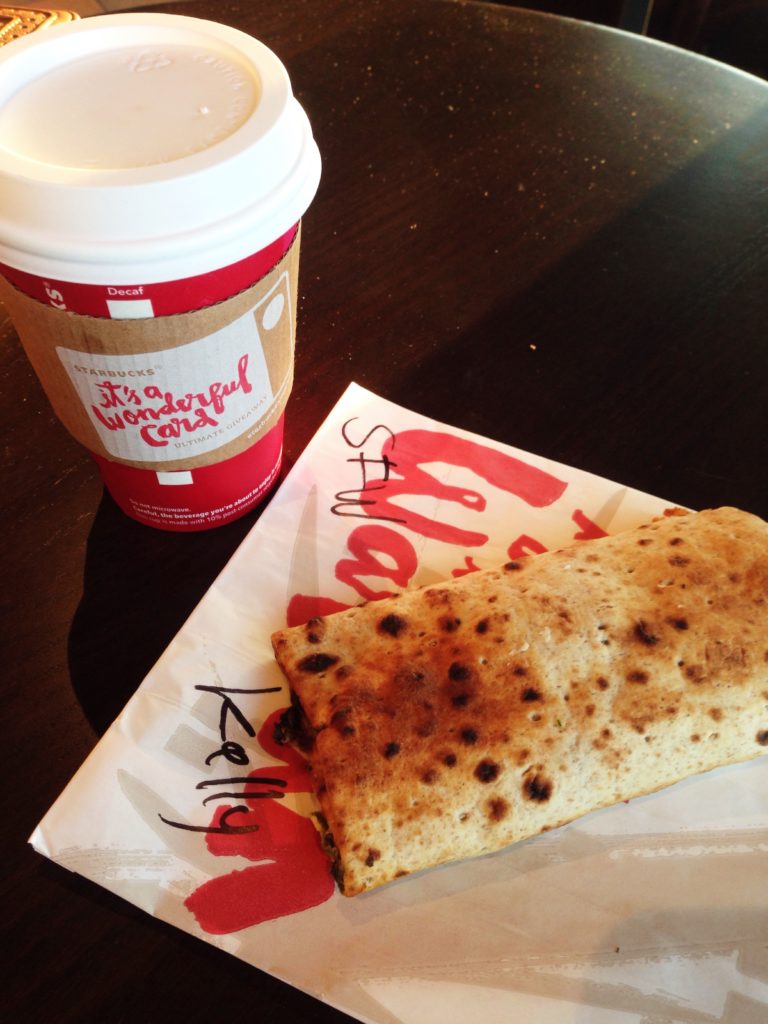 I spent the morning getting to know members doing a supplement booth (more to come on that stuff soon I promise!)  And let’s not talk about how much money I’ve spent at the cafe before I’ve even gotten a paycheck. 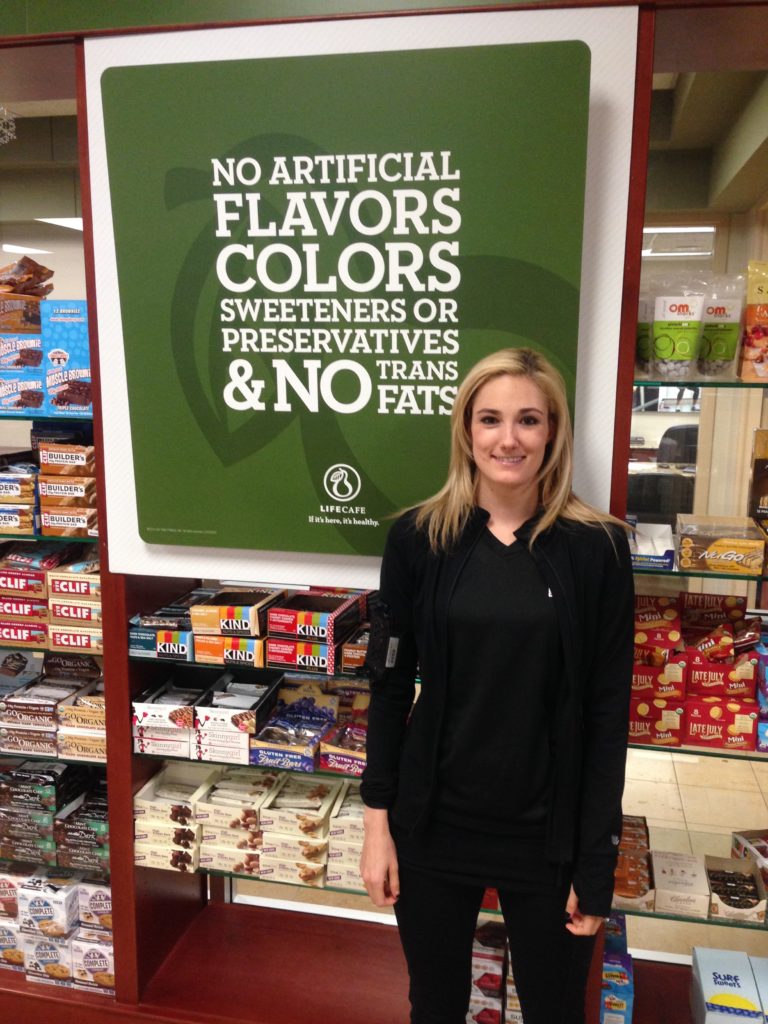 Somewhere in the late morning I ate a banana, I wasn’t particularly hungry but knew I needed a little something before doing my planned run.

I covered a 5K in about 30 minutes which was good practice for the Turkey Day 5K.  I’m determined to do the Turkey Day 5K but I’ve been making way more progress in Physical Therapy that seems to be slowed by running.  You know what that means, most likely another extended break from running OH JOY.  For now though I’m going to enjoy running the Turkey Day 5K with my new friends at work and Mr. Hungry! Saturday’s lunch was a quesadilla with TJ’s Grassfed New Zealand Cheddar, Aidells Chicken Apple Deli Meat and La Tortilla Factory Low Carb Tortillas, carrots and I ate a bit of hummus. 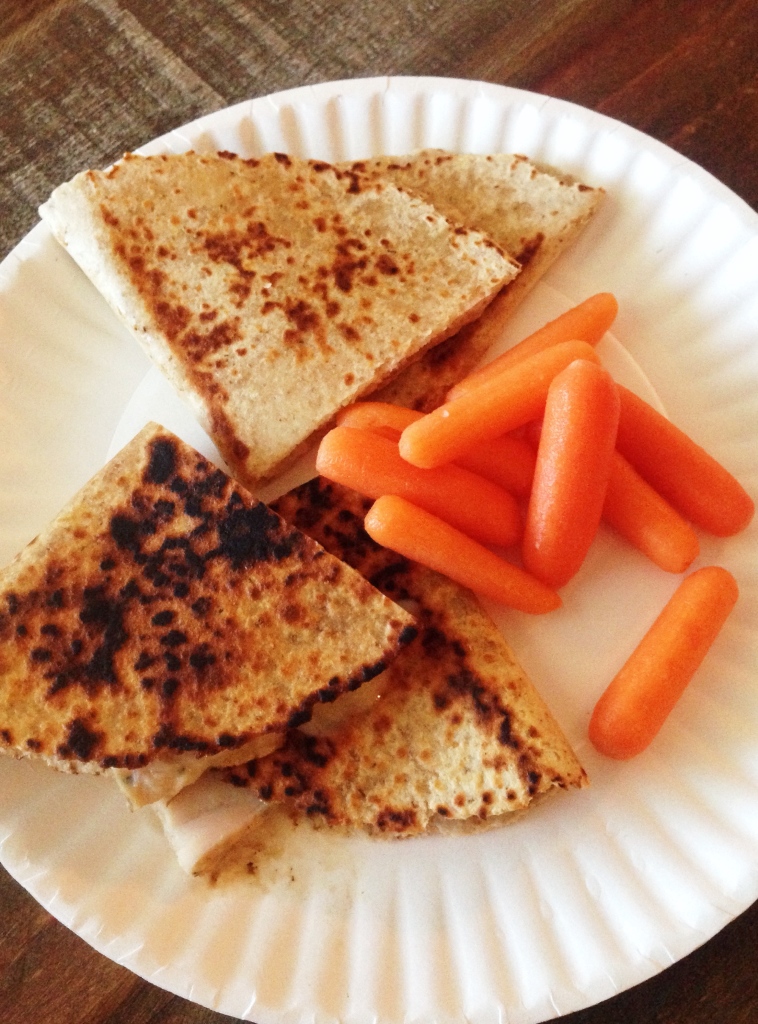 I did the grocery shopping after lunch, no pictures but it was pretty much the TJ’s usuals. Came home did some chores, but there wasn’t much to do because I’m the lucky wife whose husband knocks out all chores Saturday morning while she is at work!  We were lazy and ate egg sandwiches for dinner, we are both obsessed recently with egg sandwiches! 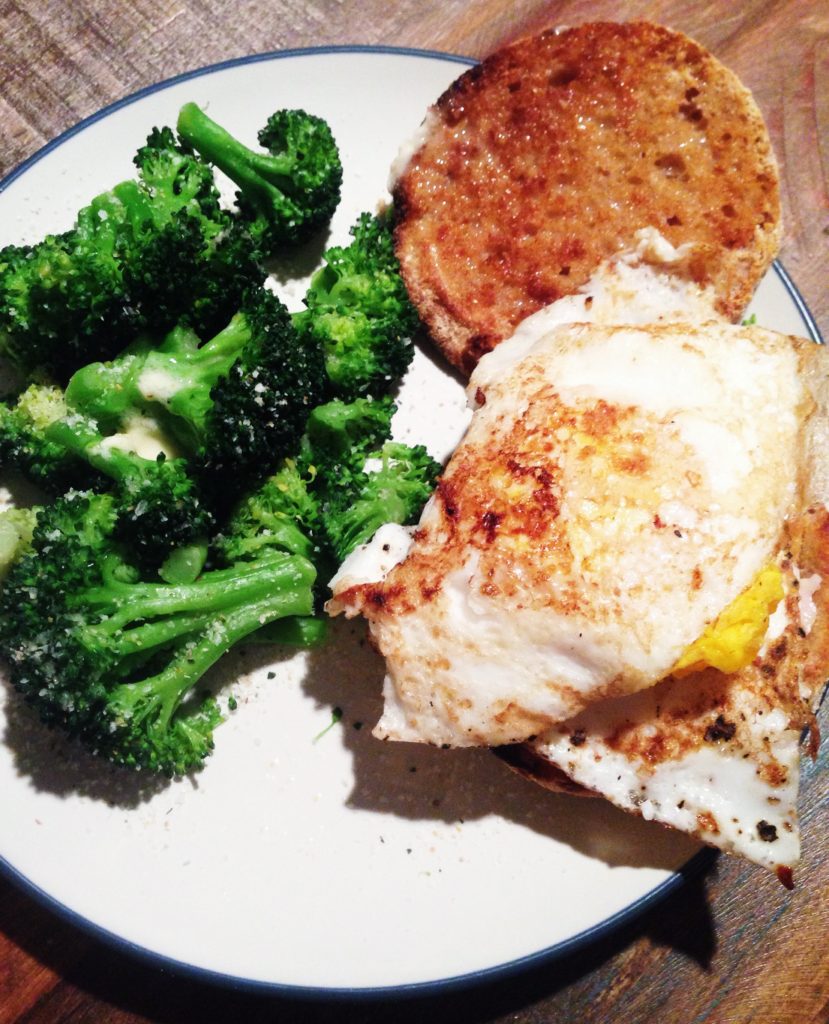 Then somehow I ended up going to 5 different grocery stores (including TJ’s from earlier on in the day).  Whole Foods, Sprouts, Bashas and Fry’s.  Don’t ask me how that happened.  #newlyweds #firsttimethanksgivinghosts #notefficient #notorganized I think secretly Mr. Hungry wanted to drive around more so that he could listen to Christmas music, and yes that was full blast when I got home!  My favorite Chobani Vanilla 100 Calorie were on sale again for a dollar at Fry’s so I loaded up! 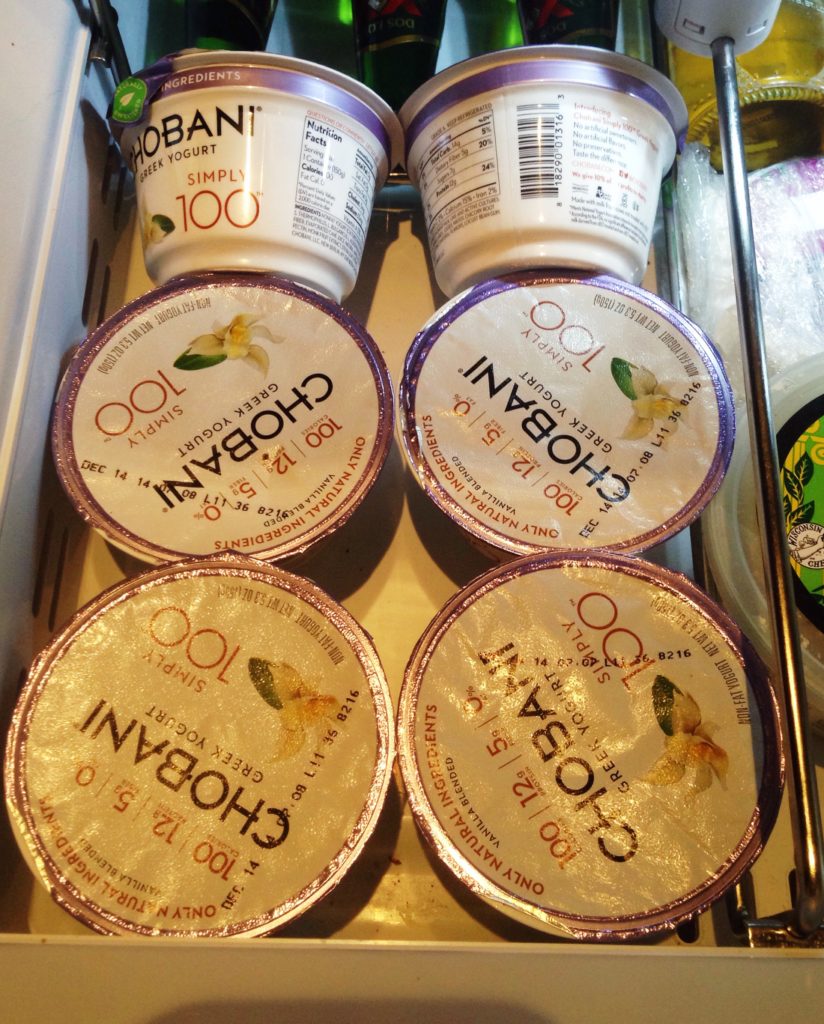 Lately I’ve been more into full fat dairy products, but I really like how little sugar these have in them and that they don’t have fruit on the bottom so I keep buying them for an easy protein dense snack.

Look what else I got this weekend! 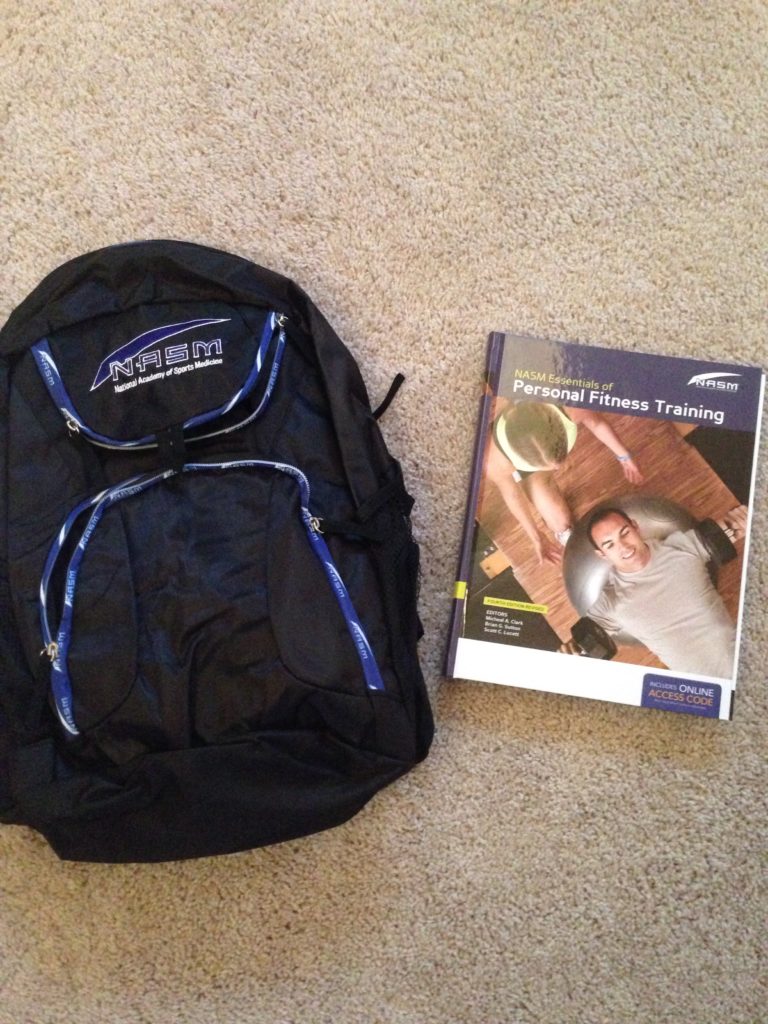 I’m super excited, plus one of the Pilates Instructors at work is just starting to study to so I have a study buddy!

We went to church Sunday morning and hung around the house.  I ate an omelet with Aidells Chicken Apple Deli Meat and Spinach stuffed into it. The guys also had pizza so I had a wing and bite of pizza, but my body was saying nooooo to a whole slice of pizza.  I think it’s from when I ate that one on my last day of work and I didn’t feel so hot after? 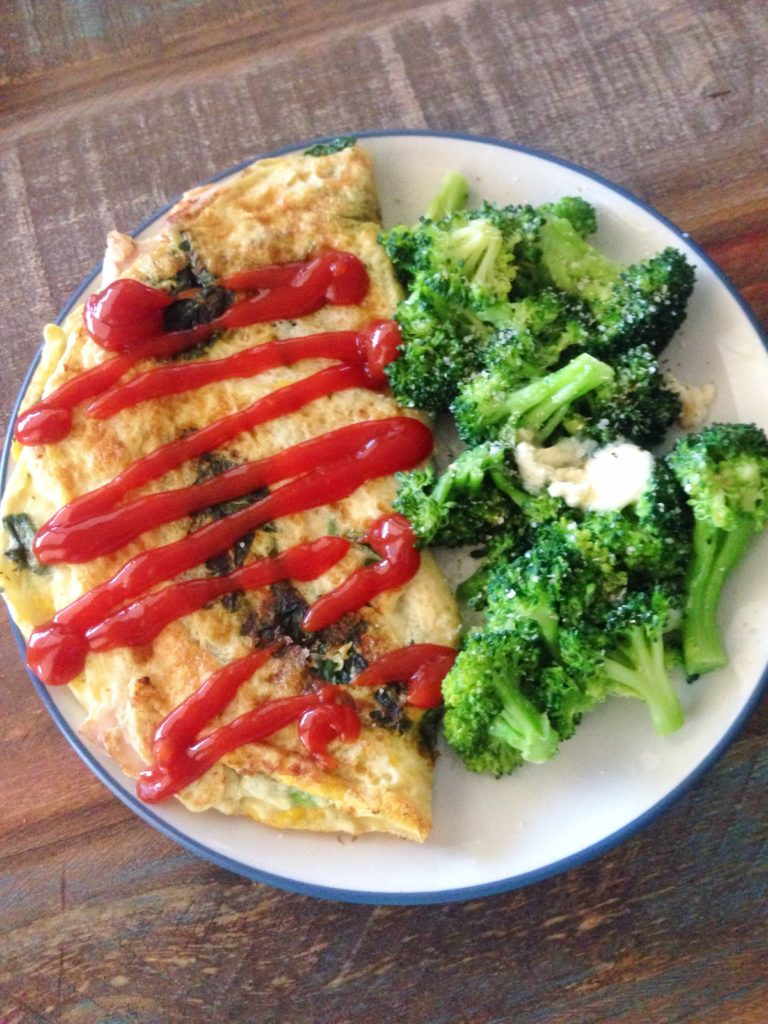 I spent the afternoon catching up with one of my oldest best friends and we geeked out talking about training and fitness and models it was super fun.  The evening was spent completing the first half of my required HRV (Heart Rate Variability) training. I ate a taco salad with chicken chorizo for dinner while I started it. 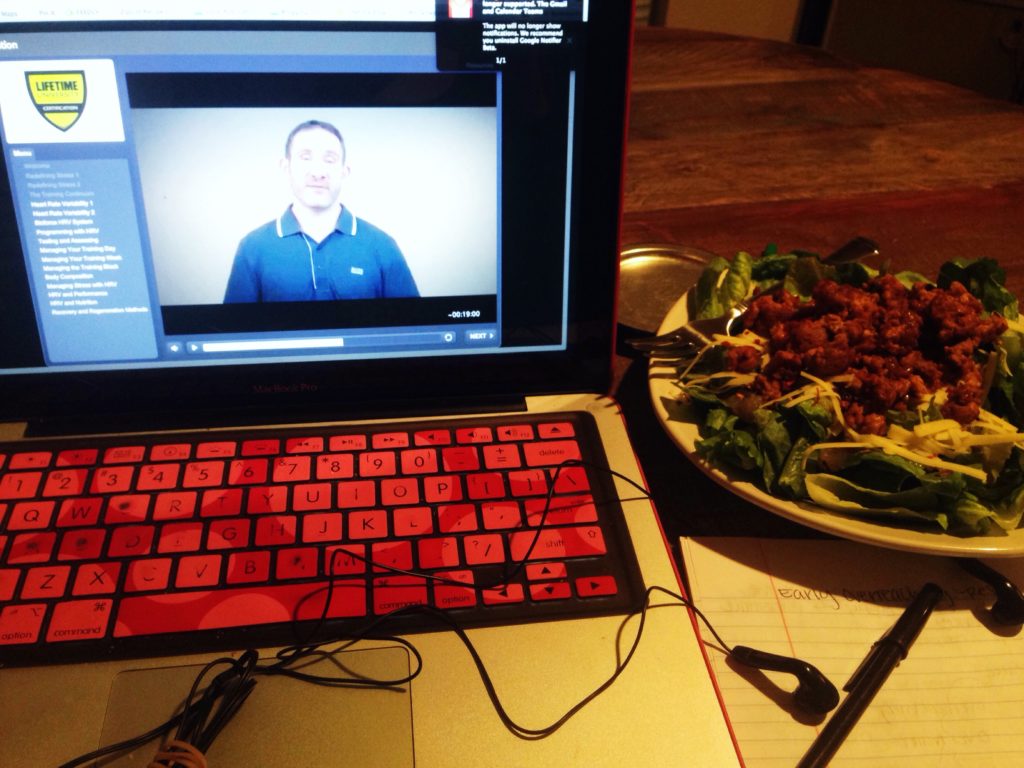 That was pretty much it for my weekend, laid back but good.  Today I’ve got a meeting to call into at work, Physical Therapy, acupuncture, recipe development, and finishing HRV training as well as maybe cracking into NASM.  That being said, with all the studying I’m doing I probably will stick to one a day Monday-Friday posts for my sanity level until things calm down!  Hope you have a fantastic Monday!