Hi, friends! Before I catch you up, here is a recap of preggo life so far!
Slam Dunk Baby Shower
Weeks 28-29 Update (Modified Bed Rest)
Second Trimester Favorites & Essentials
Weeks 26-27 Update
Weeks 24-25 Update + Supplements I Take
Weeks 22-23 Update
Weeks 20-21 Update
Weeks 18-19 Update
Hungry Baby Is A…
Weeks 16-17 Update
Weeks 14-15 Update
First Trimester Essentials
First Trimester Pregnancy Recap
Guess What?????
This week at my 32-week appointment I had a great talk with my doctor.  She said just keep doing what I’m doing, and everything will be fine, she feels that at this point I’m a pretty low risk for early labor despite being on supplemental progesterone.  I haven’t had any more cramping, so that’s a good sign.  Plus, if the baby was born now, he has a 98% viability percentage so everything would likely be okay.  Of course, a premie birth is not ideal, but at this point in the pregnancy, I feel a tiny a bit more relaxed. 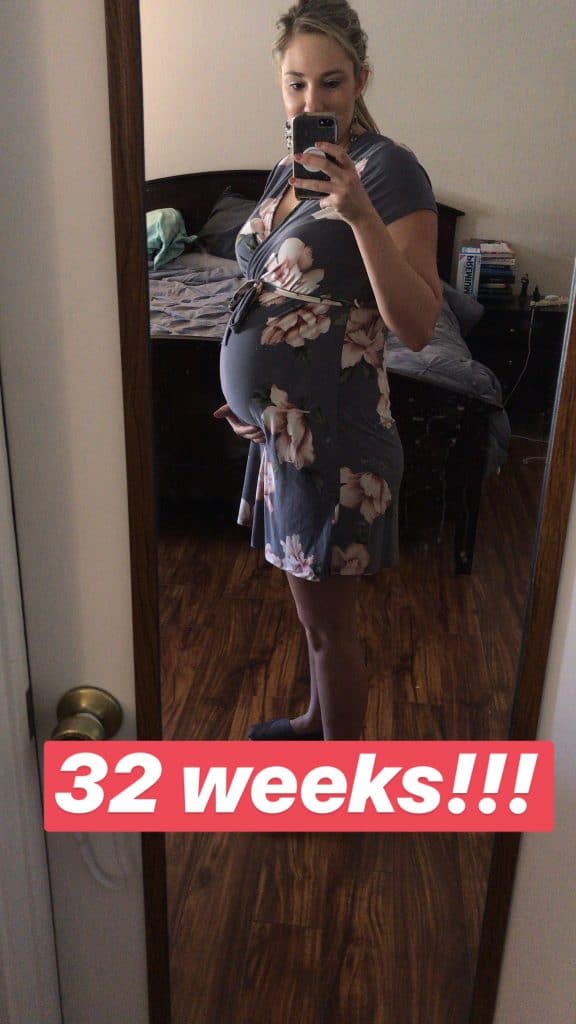 (note the crackers in the background of this IG stories photo I shared yesterday, yep that is still a thing)
I actually started worrying about the other direction.  I have a friend who was also on progesterone throughout their pregnancy that went all the way to 42 weeks.  So I asked my doctor if she thought I should stop the progesterone earlier than 36 weeks because I was concerned about it potentially delaying labor.
What she said surprised me.  First, yes I could stop at 34 weeks or cut to a half dose at 34 weeks and then stop entirely at 36 weeks.  Second, in her words, nothing good comes after 39 weeks in pregnancy.  I know this is an EXTREMELY controversial topic and there are many opinions on induction.  I’m sharing a conversation between my doctor and me.  Everyone is entitled to their own opinion and can do what is right for them.  She said that they used to think that induction increased the risk of a c section.  However, that now research overwhelming supports inducing if there is no baby by the due date because induction may decrease the risk of a c section. Basically, if the baby gets too big for mom to push out that increases her risk of a c section.  She mentioned that if the baby was on the smaller side and mom was doing well with no other risk factors, then she would not push induction.
In my case, the baby is measuring ahead.  My husband was born 6 lbs something at 34 weeks, totally healthy with zero breathing problems.  So right now, my thoughts are if there is no baby by the due date or even sooner I’ll take her recommendation for induction if she gives it to me.  She is the one with 20 years plus experience, not me so I’ll just let her do her job.
When it comes to thinking about pain meds:  I’m currently more terrified of an epidural than the pain.  I  mostly hate the thought of being hooked up to all those machines with no control of my legs.  So, I’ll delay that as long as possible if not entirely.  But, I hear that I won’t care when it comes time for an epidural, so if that’s true then bring on the pain meds.
Now onto the regular update! I will say I was terrible at recording the last few weeks so I just put them all together! 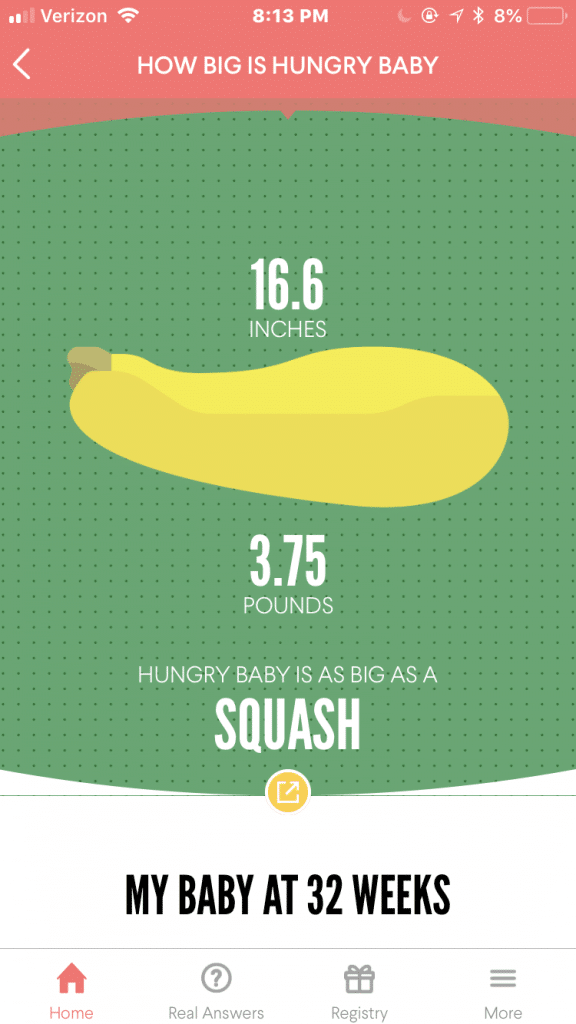 Man, this last couple of weeks has been WEIRD!  I’ve had a few nights where the nausea was so bad I couldn’t go back to sleep until I ate crackers, but for the most part that is under control.  My bladder is still under attack, and I pee a billion times a day.  New symptoms are more strain on my lower back and some crazy leg cramps that last ALL DAY.  I’ve also had a few headaches here and there; they feel kind of like sinus headaches which are no fun.

Um, I would LOVE a cocktail, beer, or a glass of wine any day now.  K thanks!

Some nights I’ve got crazy preggo insomnia.  I wake up at like 3 or 4 in the morning and can not go back to sleep.  Other nights I barely wake up once to pee.  It kind of goes in cycles like that, I’m up for a couple of nights then I sleep for a couple of nights.  A couple of nights leg cramps or back pain have kept me up until I finally cave and take a Tylenol.  Then I’m out the rest of the night.  Pregnancy is WEIRD; the dreams are even weirder.  And they are so vivid and clear, I remember them perfectly the next morning.  Overall I’d say I’m getting 6-12 hours of sleep a night, so it’s not consistent AT ALL.

Animal protein, in general, isn’t the best but I can eat it.  The most surprising thing to me is my aversion to food IN GENERAL.  Like I get hungry, and I’m annoyed by it because NOTHING sounds good.  It’s like the first trimester again, but without nausea, so I know it could be WAY worse.  Still kind of annoying though. 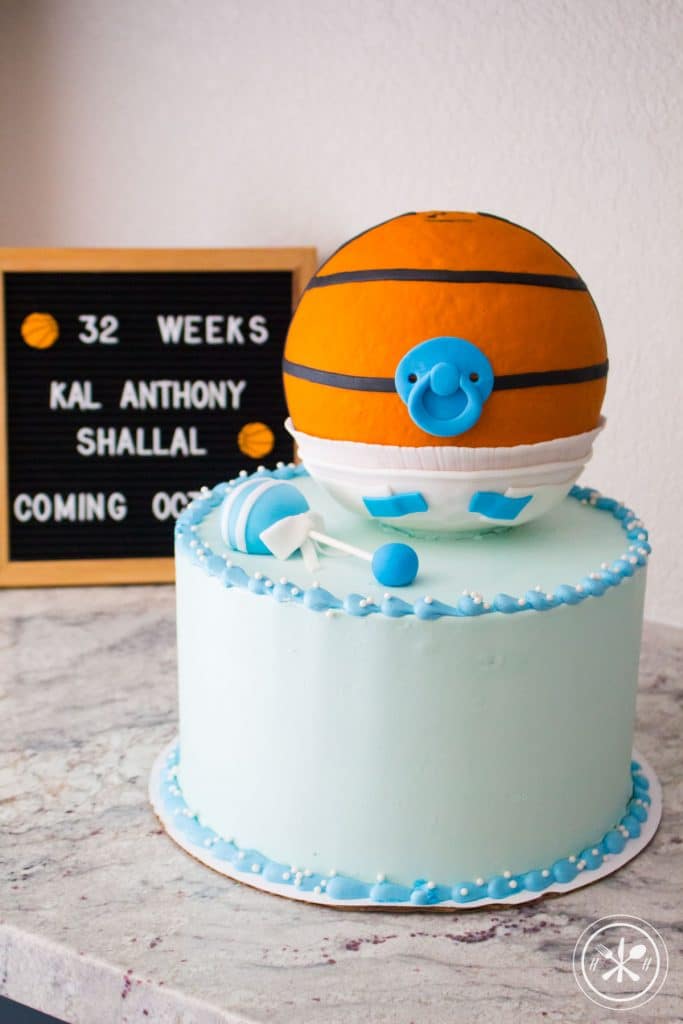 Sweets, I’ll admit it I have a sugar tooth right now.  I know that’s partially from the stress of trying to get everything together for maternity leave and some changes happening with What to Eat? Meal Plans that were unexpected.  So stress might be the bigger culprit than pregnancy.  Other than that I’ve been eating a ton of easy foods.  Like an apple, a yogurt, etc. anything that doesn’t require cooking it’s my best friend.  Then I make something for the blog, and I hate making it but love eating it so I don’t know what that is about.

Modified bed rest so I’m just walking around shooting recipes and stuff like that!  Although I got the impression I could probably start incorporating more walks now.  I’ll wait till my next appointment to be 100% sure though.

I ordered my breast pump through aeroflow and paid NOTHING for it.  Thanks, Anne for sharing that recommendation on her blog!
Our baby shower was last weekend.  The next day I washed EVERYTHING that needed to be washed.  I’ve been waiting to do that since my mom first got us some clothes at like ten weeks pregnant.  I also did an inventory of all the gifts we received and went on a shopping spree with what still needed to be purchased.  Here are some things I bought this week:

Of course, we received a ton of gifts from the baby shower as well!  But since I didn’t technically buy them, I won’t share until after I try them out!

Same sleep book as I mentioned in the last update!