Hi, friends!  Before we get started, here is a recap of pregnant life so far:

As I write this, I’m starting week 30, and man does it feel crazy to be in the THIRTIES (age wise and gestation wise)!  In my Friday Fitness, Food, and Favorites last week I promised to update you guys about my “modified bed rest” situation, so here it goes. 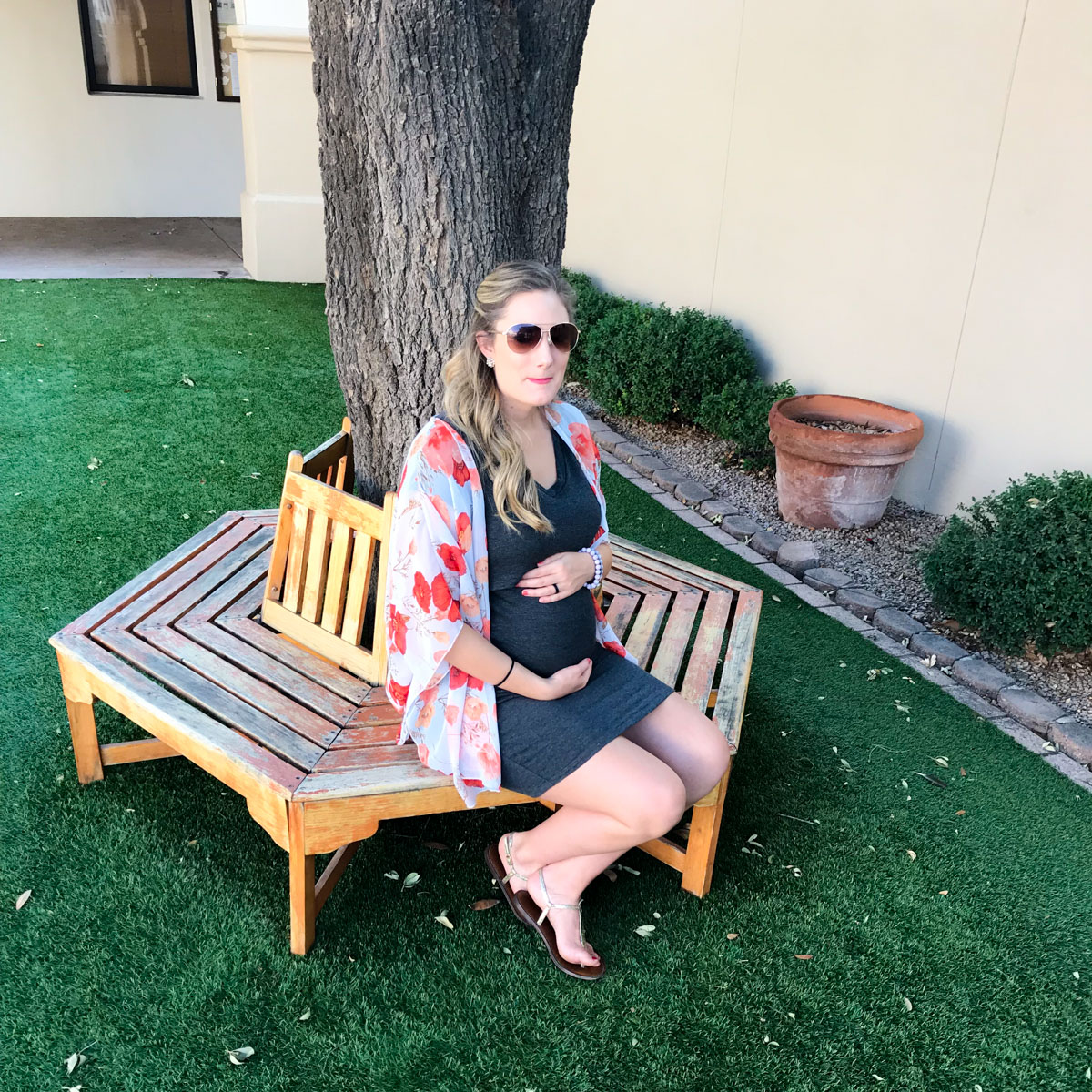 (This dressy is so comfy and it’s nursing friendly!  Came from Stitch Fix! )
When I went in for my week 27 appointment, I had been having some cramping on and off.  The doctor said to let her know if it was happening more than three times a week and ordered an ultrasound to check cervical length and baby’s growth.  At the 29 week ultrasound and appointment, both looked good.  The cervical length was still well within the normal range, but 1 cm shorter than it had been at my 19-week appointment.  My doctor was not concerned about it at all since it was still well within the normal range.  However, since I still had the cramping, she decided to do an internal exam.  After that, she thought my cervix was a bit softer than she would like, again not enough to cause high alert alarm or anything.  However, since I’ve been on supplemental progesterone this entire pregnancy, she said she’d rather be conservative in her recommendation.  She recommended I remove any exercise that wasn’t necessary and limit standing to no more than one hour.  I go in this week for her to do another exam, and potentially a fetal fibronectin test as well as another look at my cervical length.
During week 27 the cramping was happening at random times of the day.  In the last two weeks, it’s only happened at night.  Usually, it’s mild discomfort, but one night it was strong enough that I couldn’t fall asleep, but that subsided within 15 minutes of taking a Tylenol. My doctor said if it gets that bad again to go to OB triage, luckily it has not, hoping it stays that way!  My gut tells me that it’s muscular since the baby measures almost 4 lbs already I think it’s just those muscles getting tired at the end of the day.  According to the What to Expect When Your Expecting Hard Copy book my mom got me, some pelvic aching is normal?  It’s just hard to distinguish whether it’s a cramp or an ache and as my doctor said she couldn’t tell me either without hooking me up to a monitor while I’m having the pain.
I might have mentioned this before but Mr. Hungry was born at 34 weeks, and I was born at 36 weeks.  Neither of us needed any additional intervention and had no complications from our premie status.  Mr. Hungry was even OVER 6lbs at only 34 weeks!  So keeping in that in mind I’m trying to be calm and take each week, maybe even each day at a time.  I know many of you have been following along so I’ll try to update again on IG stories after my appointment this week.
Now onto our regularly scheduled program!

The first week of the third trimester!  Home stretch!  Feeling lots of babies kicks this week! 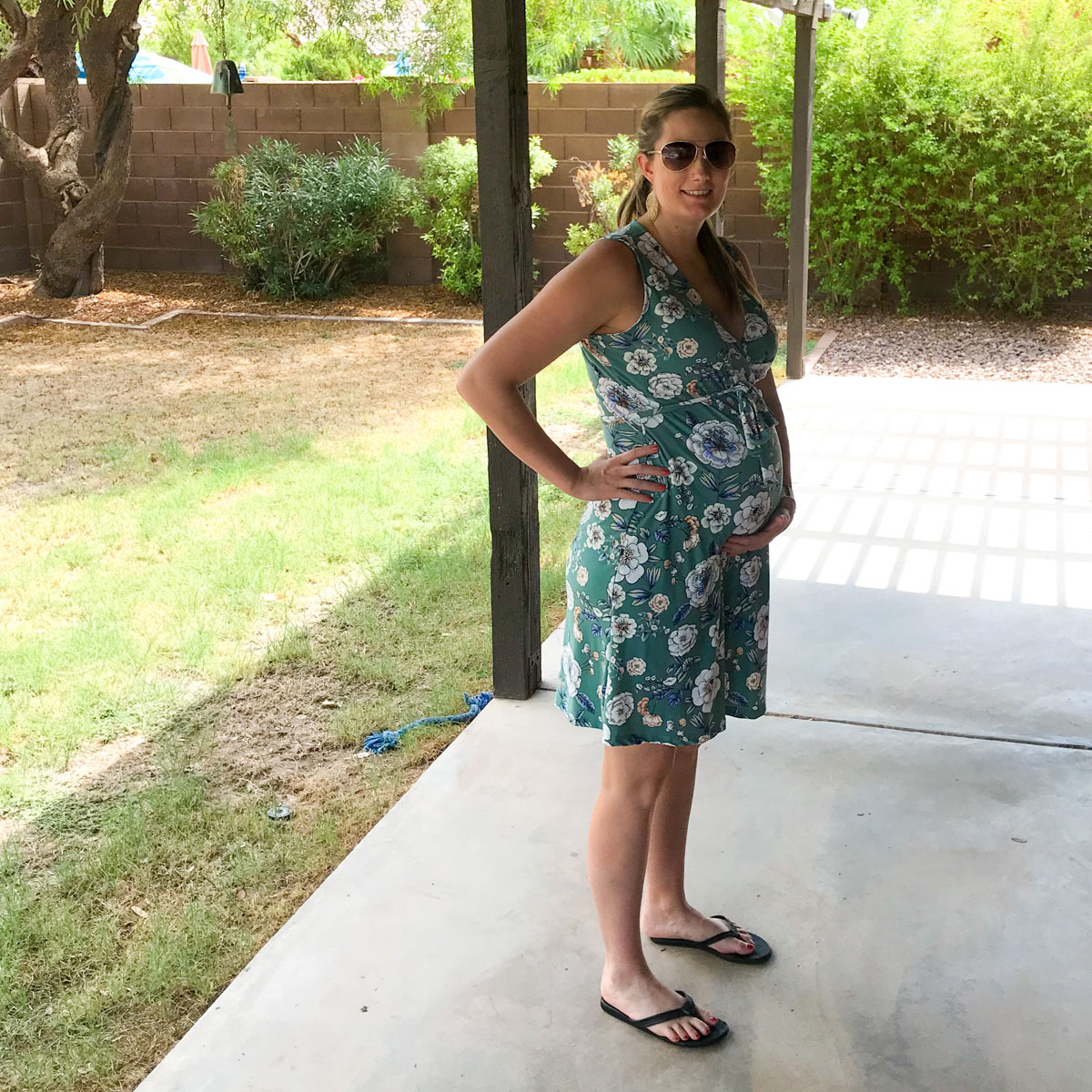 I think I might have even felt hiccups, they felt like rhythmic pulsing down kind of low.  The baby also likes to hide from his daddy and other family members.  I can SEE and FEEL him kick, only to have him disappear the minute I tell someone about it.  He’s a sneaky one!
Baby Size: 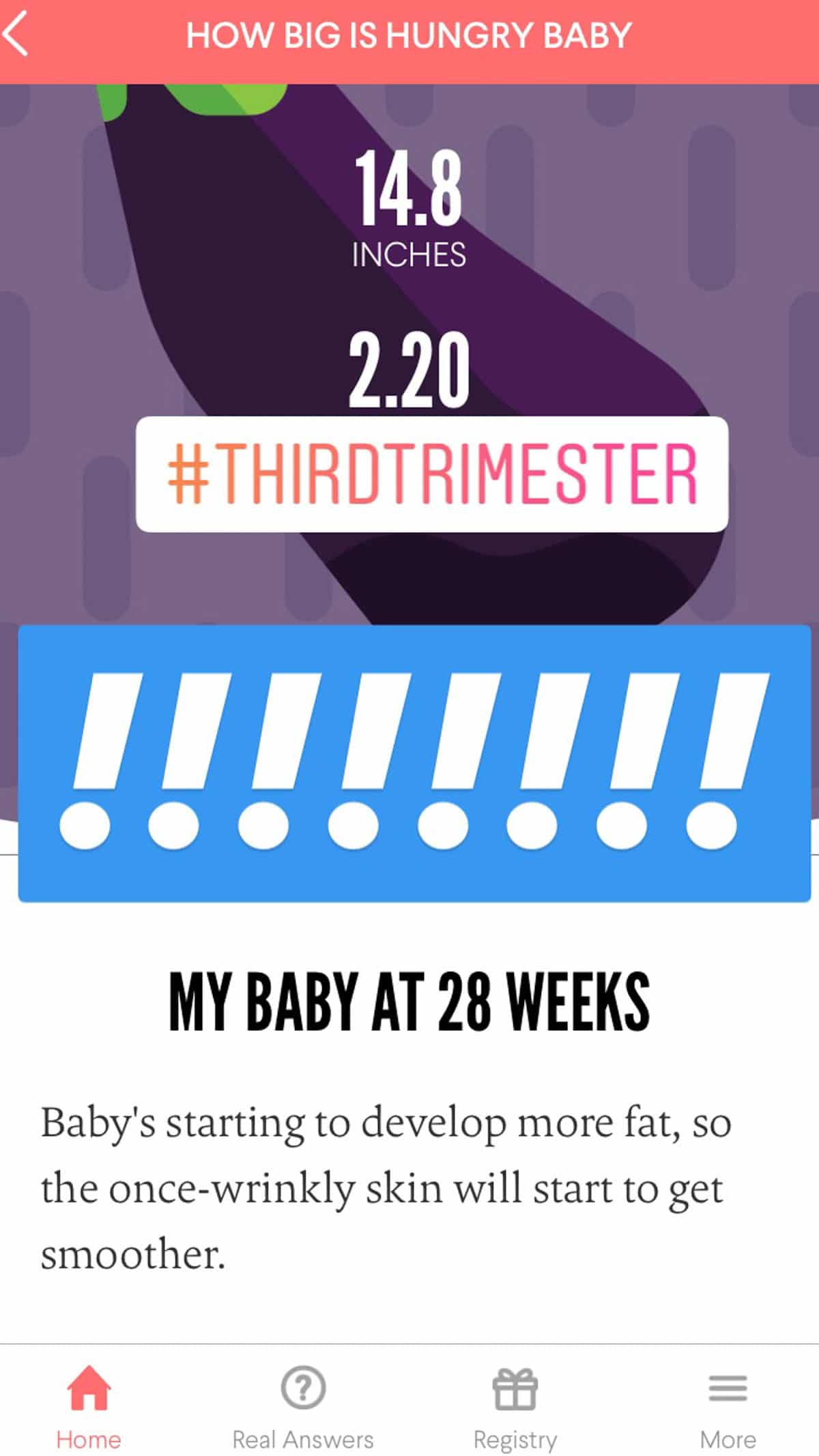 Symptoms:
The anxiety I mentioned in my last update hung around for the better part of the week.  Toward the end of the week, I focused on getting more sleep, more exercise, and following my normal routine.  The anxiety dissipated as I just concentrate on more self-care.
The rest of my symptoms are pretty mild as well – minor SI joint pain (as long as I avoid aggravating it) and minor shoulder/rib pain.  I’m peeing a ton more now!  In the morning it feels like the baby is sitting DIRECTLY on my bladder, but that lessens a bit throughout the day.  Overall still feeling pretty good!
Currently Missing:
Being able to eat out without being worried! So sick of asking people questions they don’t get or think I’m crazy for asking every time we eat out.
Sleep:
Sleep wasn’t great this week, at least not as good as it’s been up until this point.  I kept waking up a ton, and not just to pee. Toward the end of the week, I was able to go back to better sleep except for waking up to pee 1-2x a night.  Usually 2x now.
Food Aversions:
None!  I still haven’t eaten any chicken, but you know that’s nothing new.
Food Cravings:
Not necessarily cravings but the food just tasted terrific this week.  We went out to eat a lot, and I enjoyed every single meal.  Especially this epic animal cookie ice cream cone I got from the Water and Ice in Chandler. Thrifty Ice Cream = the best! I shared some of the other meals I ate out here! 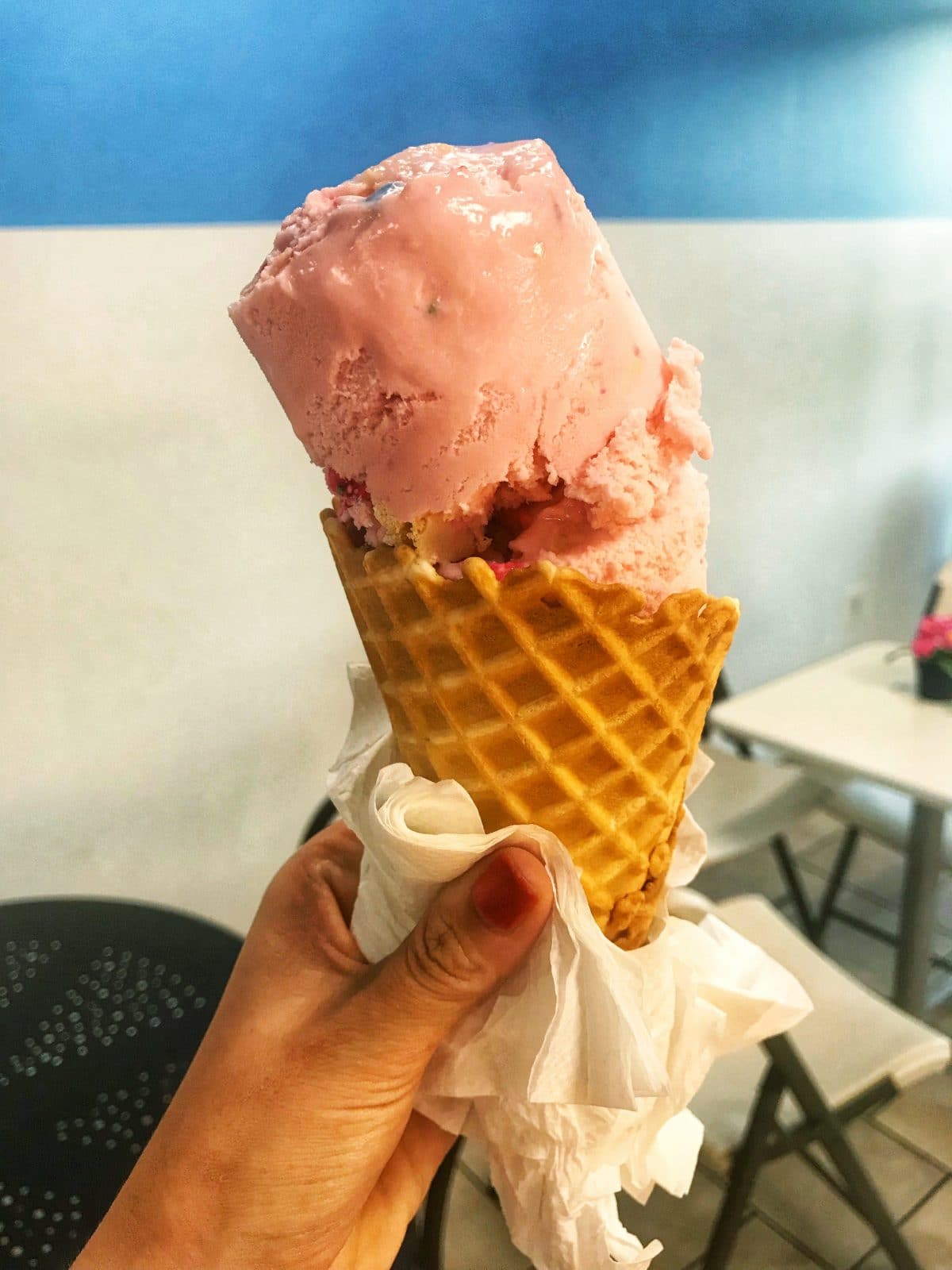 Exercise: See FFFF #75
Buying:
I didn’t share on IG, but I asked Stitch fix to send me maternity/nursing stuff.  I figure this late in the game maternity clothes are kind of dumb to buy, but nursing friendly outfits are something I don’t have.  OMG, I’m so nervous about breastfeeding, why can’t there be a practice round for that?  I really really want it to go well!  I know it probably won’t be easy, I hope I can figure it out.
I mentioned that part of our nursery furniture got delivered, but the bookshelf/hutch had to go back because it was damaged.  Well, the second time they sent it, guess what?  Damaged again! Because it was only slightly knicked we took a significant discount on the product and kept it; I did not want to hassle with another delivery. 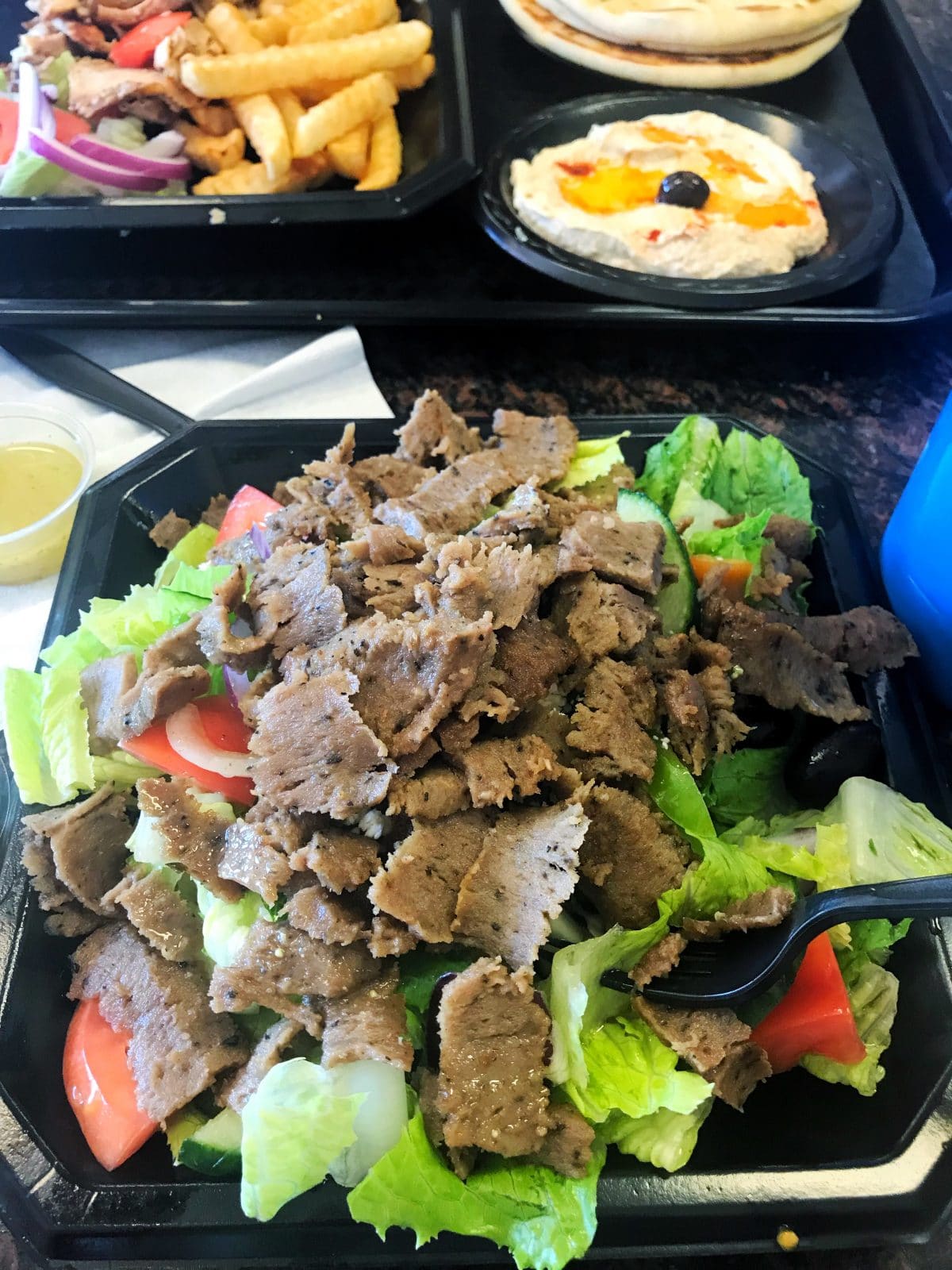 We also ordered the food for the baby shower!  An ode to Mr. Hungry’s roots, we ordered Middle Eastern food from Gyro Express in Chandler. 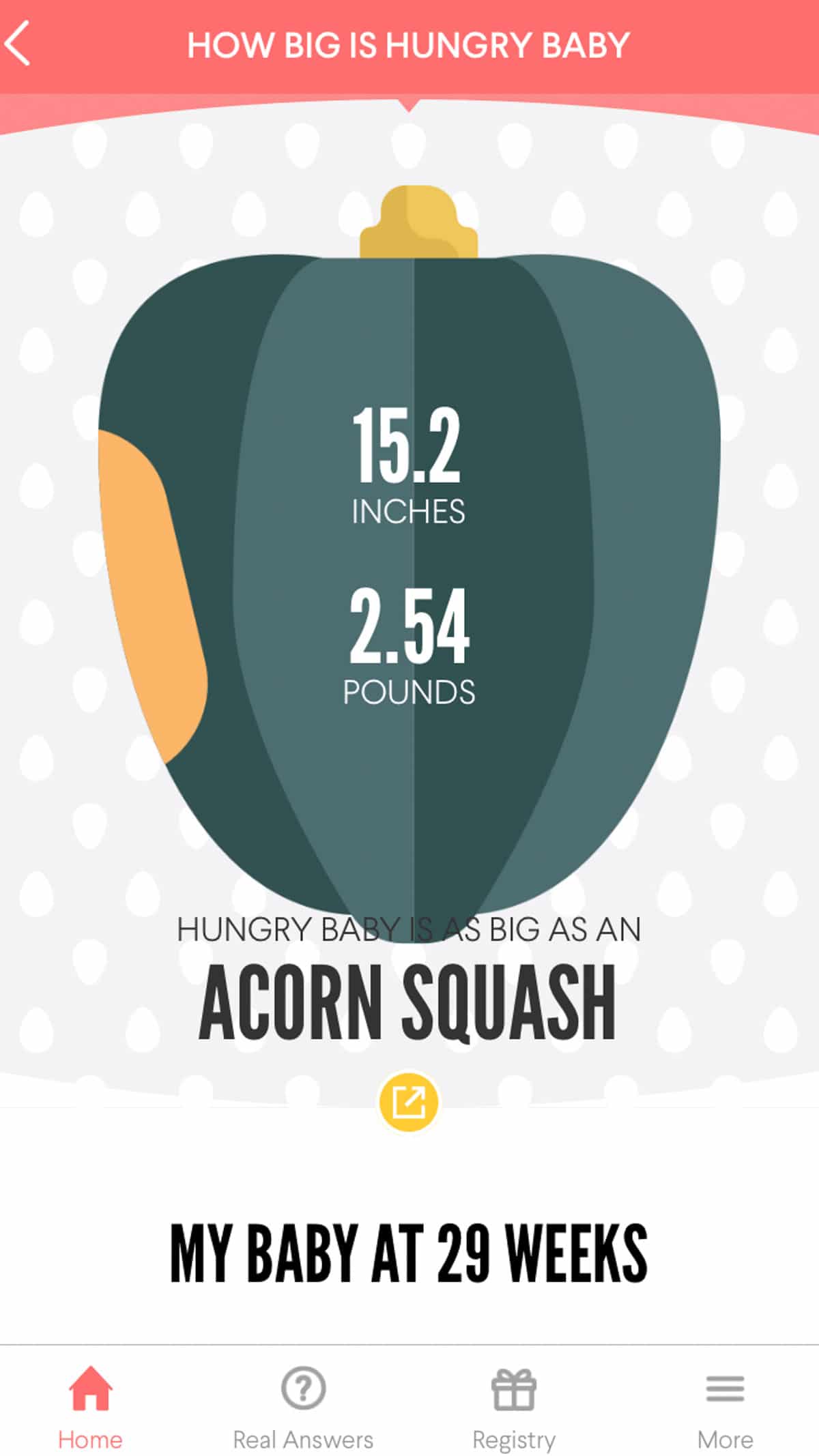 Symptoms:
It’s like I drink water and it goes STRAIGHT to my bladder, am I even absorbing any of it?  It’s like the liquid has found a bypass route straight to my bladder I swear. My SI Joint pain the same, acts up when doing recipes shoots I think because I’m doing a ton of bending and reaching. I’m also definitely having more shortness of breath.  People keep commenting on how high I’m carrying, and I’m starting to realize how that might affect little things, you know, like breathing.  I’ve also had some nausea return this week, but thankfully it didn’t hang around too long! The happiest thing I have to report is that my anxiety is much better this week!
Currently Missing:
I’m staying positive about the “bed rest” situation, but I always prefer to be active if I have the choice!
Exercise: See  FFFF #76
Sleep:
Um, hello, the third trimester.  By the end of this week, I’m regularly getting up 2-4x a night to pee, fun fun! Luckily with the modified bed rest recommendation, I’ve been able to get way more hours in bed then I would have.  Mr. Hungry took over walking Nala, so I’ve been in bed 9-10 hours instead of waking up early.  I’m probably getting 8-9 hours of solid sleep a night which I can tell has made a big difference in my energy levels.
Food Aversions:
Nothing extreme, except chicken.  I did eat some chicken breakfast sausage as part of a breakfast bake though. It’s lunch and dinner that I struggle with; I’ll be starving and literally can’t think of one thing I want to eat.  Sometimes not even my go-to bread/cheese relationship does it.
Food Cravings:
Pizza and cheese (sharp cheddar and baby bell circles are my favs) is always a winner.  I also went through a BLT stage that was over by the end of the week.  Vanilla Greek yogurt still sounds good, and I’ve loved my oatmeal crust breakfast pizzas for snacks.  I’ve been doing smoothies for breakfast which at least help me get in some spinach!
As for unhealthy cravings, let’s just say I made a pan of Grandma cookies, as written in her original instructions.  They were epic, and they are almost gone, sorry not sorry.
Exercise: See FFFF #75
Buying:
I bought a rug for the nursery!  I hope it looks good. I’m obsessed with it.  (My theme is Safari.) 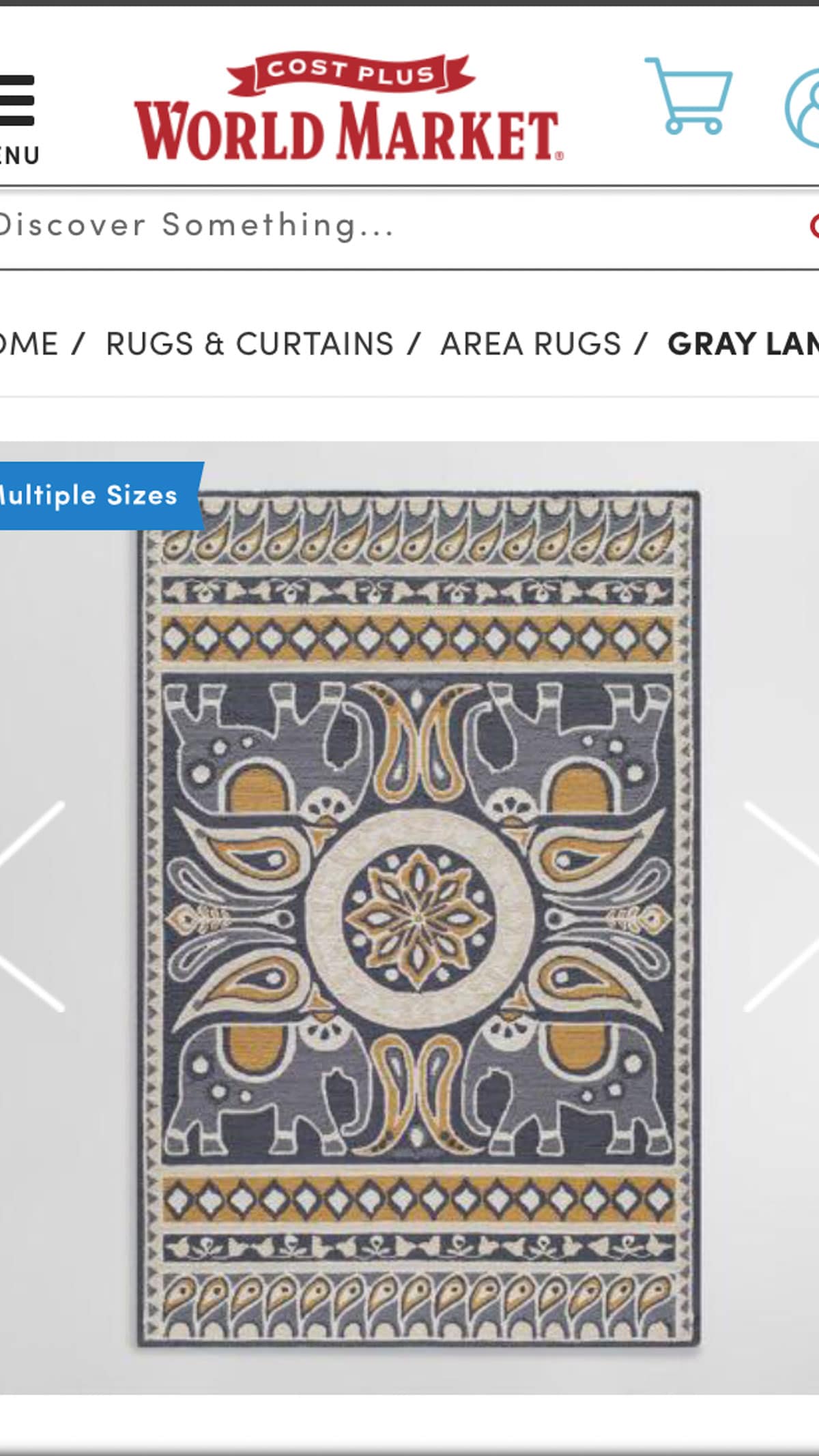 Plus got the stroller and car seat attachment all set up almost all by myself, I was pretty proud of that!  PS the stroller is the Bob Revolution Flex Jogging Stroller, and we ordered it early because it’s currently 90 bucks off!  So, freaking excited!  I wanted a stroller that would last me for many years and hopefully multiple kids! 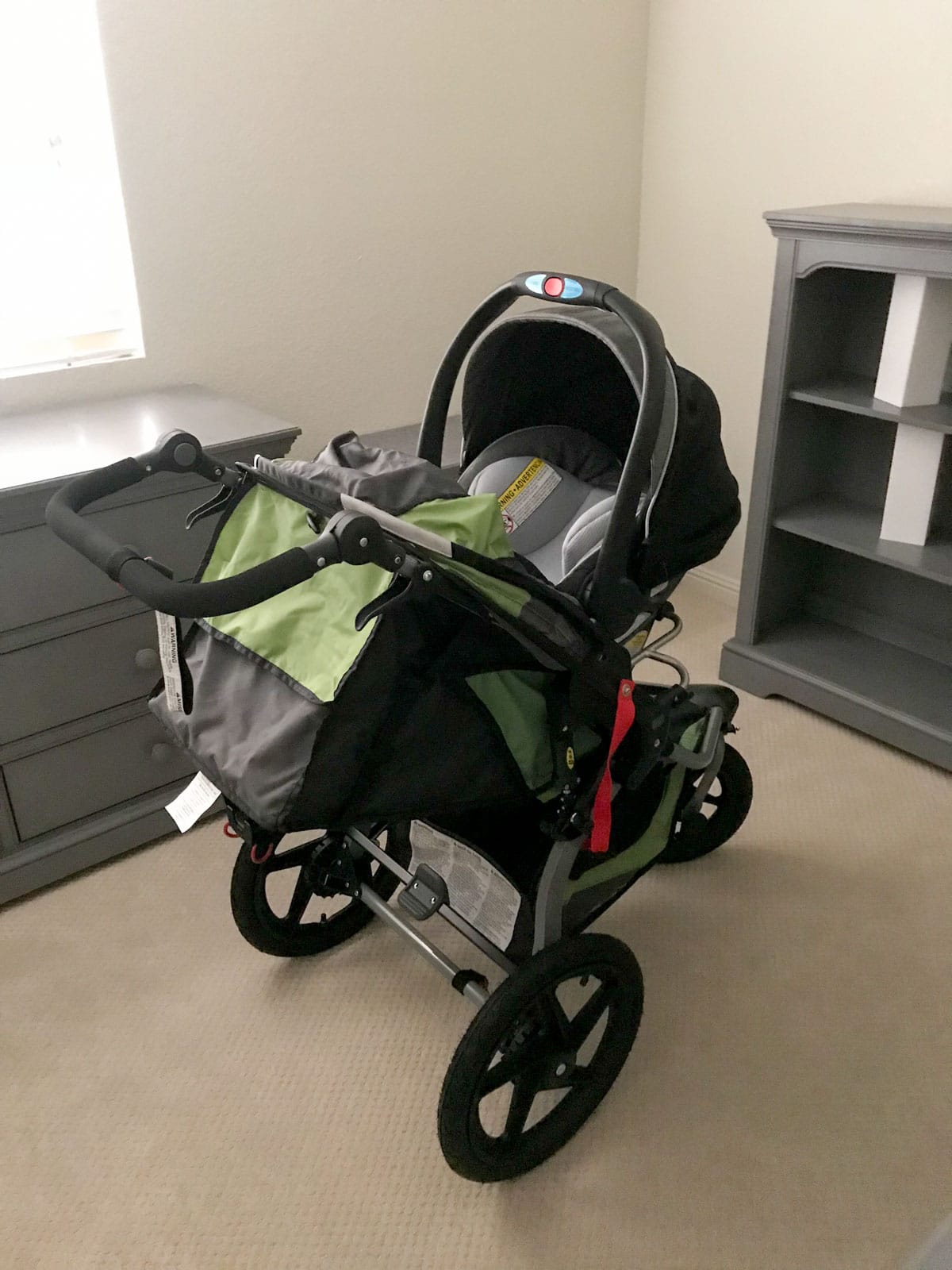 I remembered Anne wrote several times about ordering her breast pump on Aeroflow, so I decided to check it out.   It was super easy, I just put in my insurance information, and within the day they had my prescription in the system.  I then had several pump options to chose from that were totally FREE from my insurance.  I ended up choosing the Lansinoh Smartpump Double Electric Breast Pump.  I know nothing about breast pumps but I love the idea of the app that comes with it, always a sucker for technology and data!  According to my insurance benefits, it’s supposed to ship on September 13th, so happy that’s done!
Reading:
Mr. Hungry’s aunt bought us the book Healthy Sleep Habits, Healthy Child so I’ve been reading it. It’s full of great information but a little overwhelming for sure!
Until next time friends!  Which by the way, the next update will likely be in three weeks, not two weeks.  I’m trying to limit pregnancy/baby posts to once per week so I’ll have to push back the next update so I can share about the baby shower!  Thanks for reading friends!